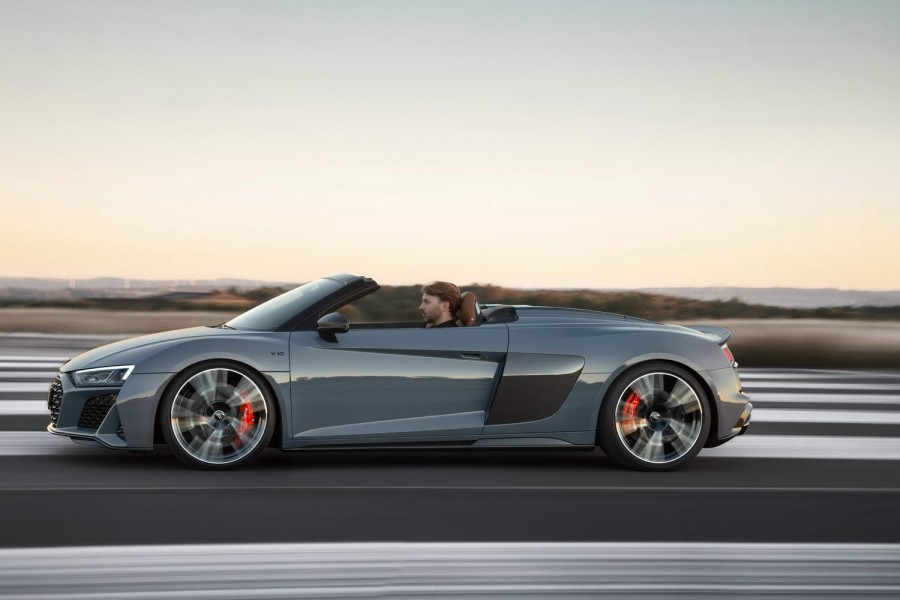 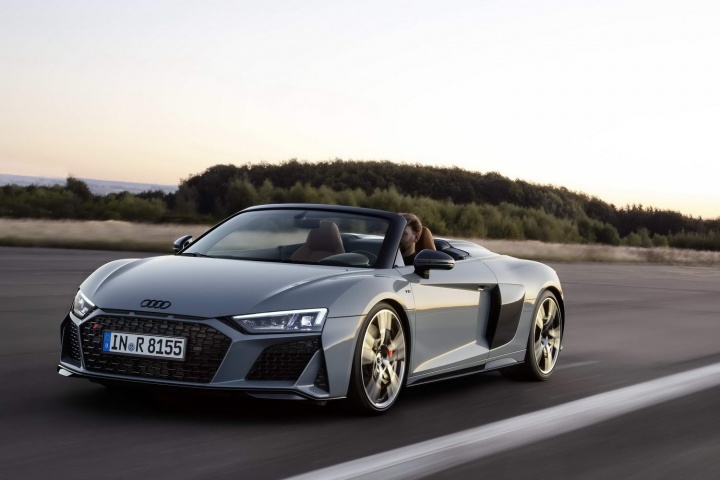 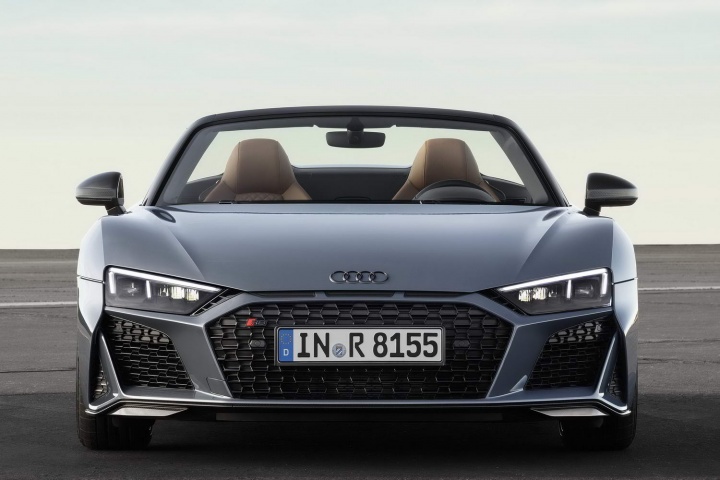 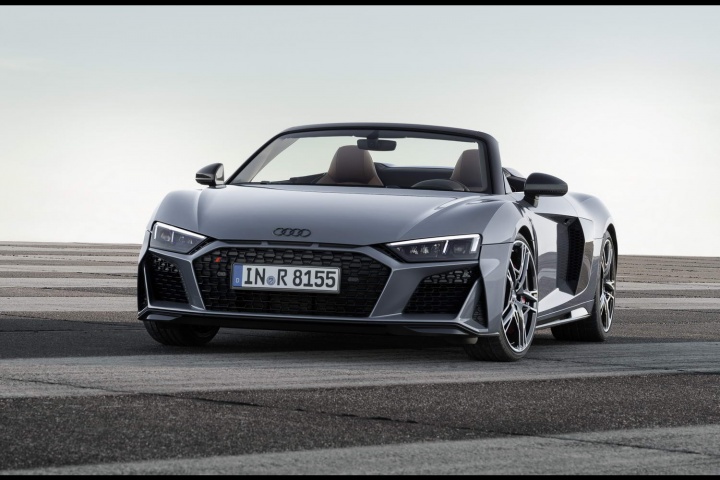 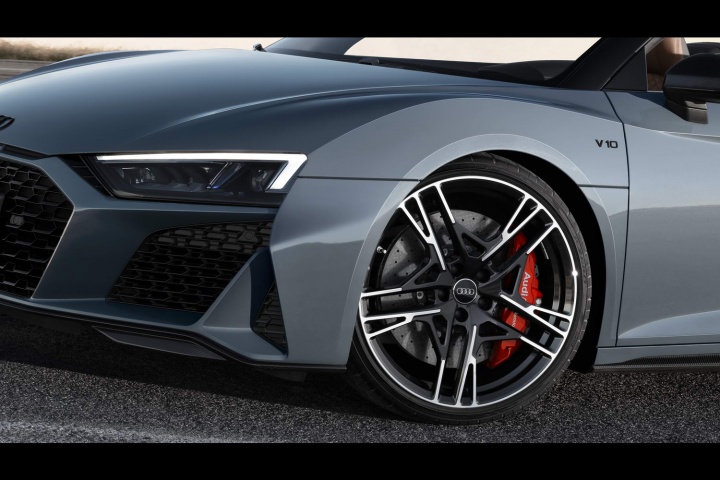 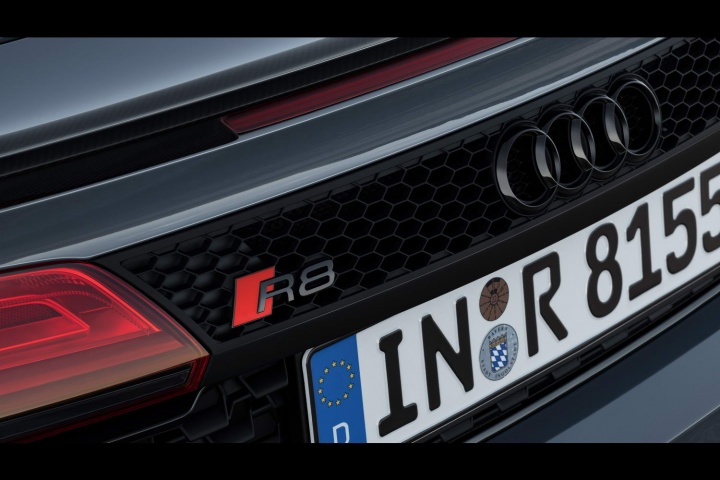 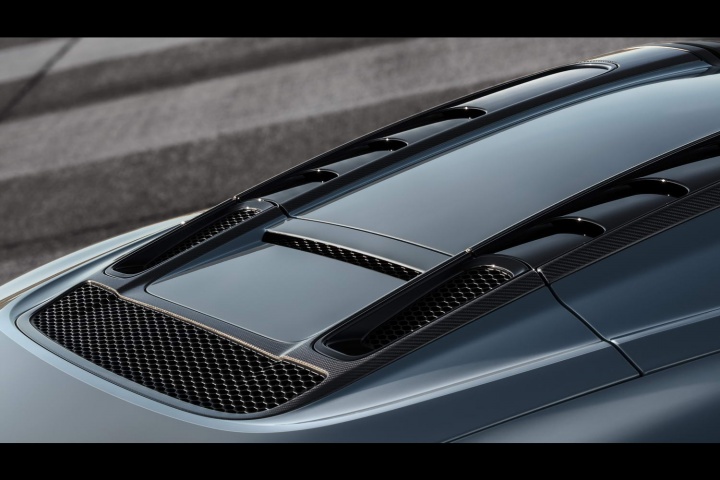 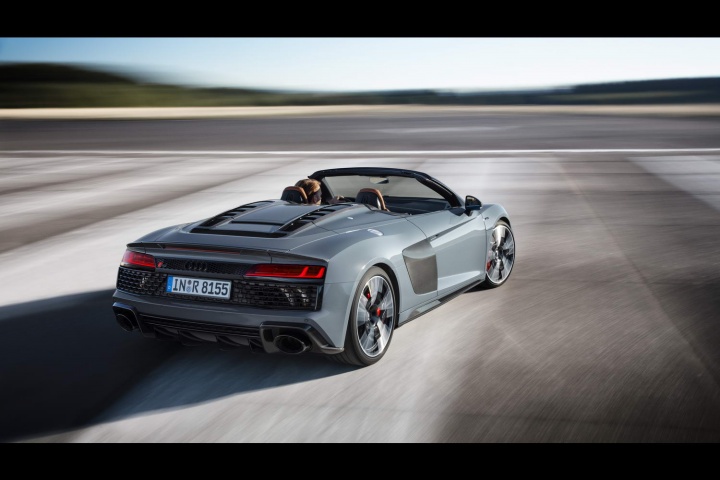 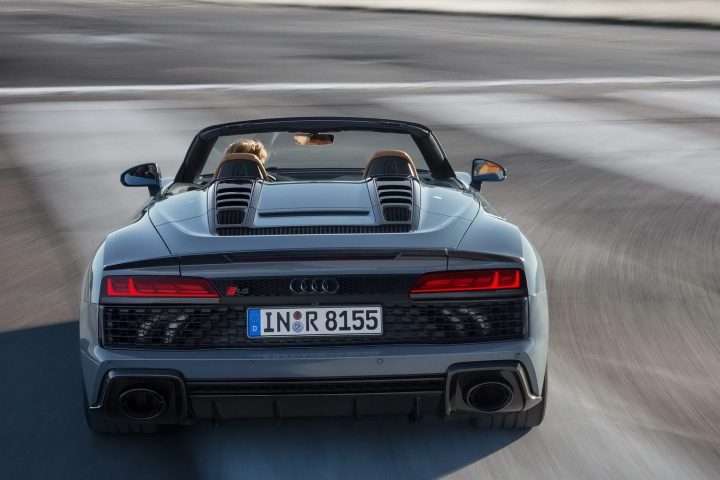 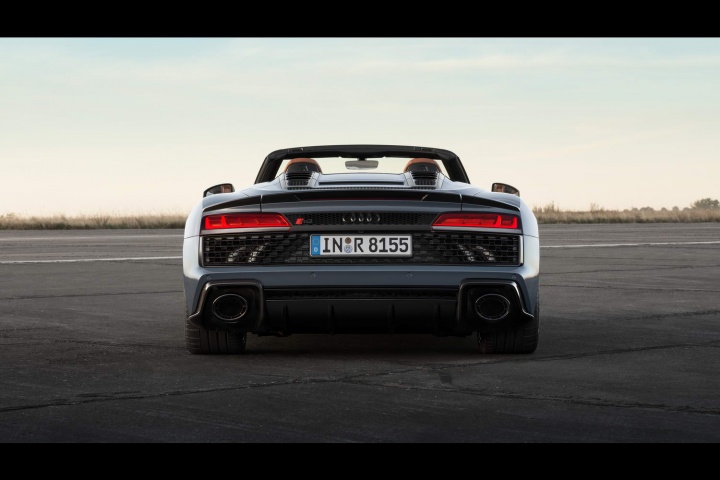 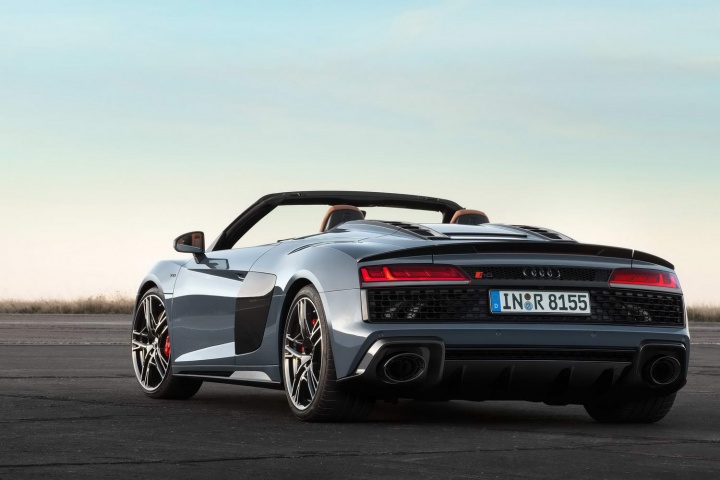 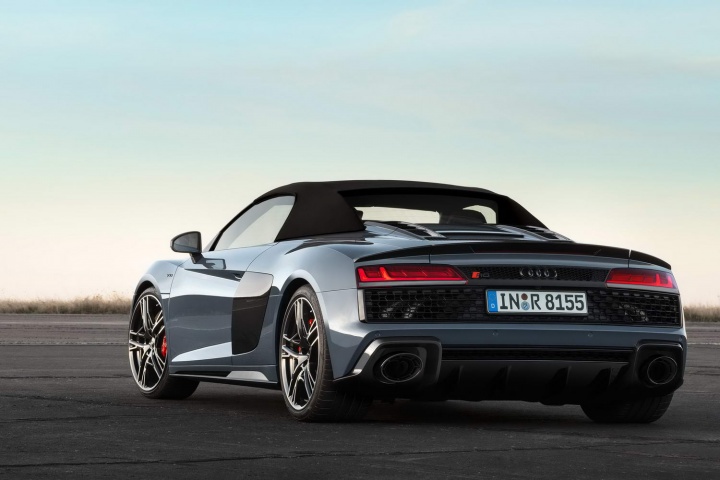 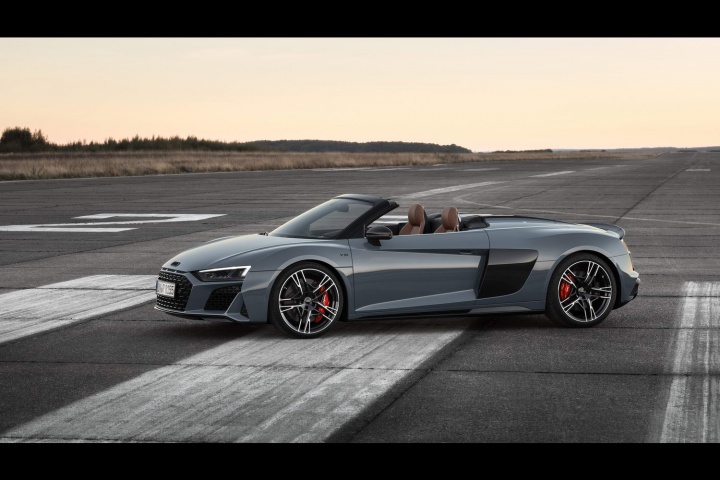 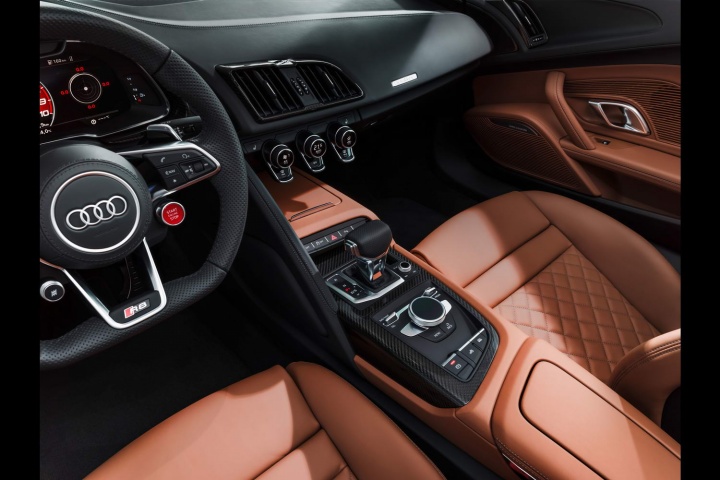 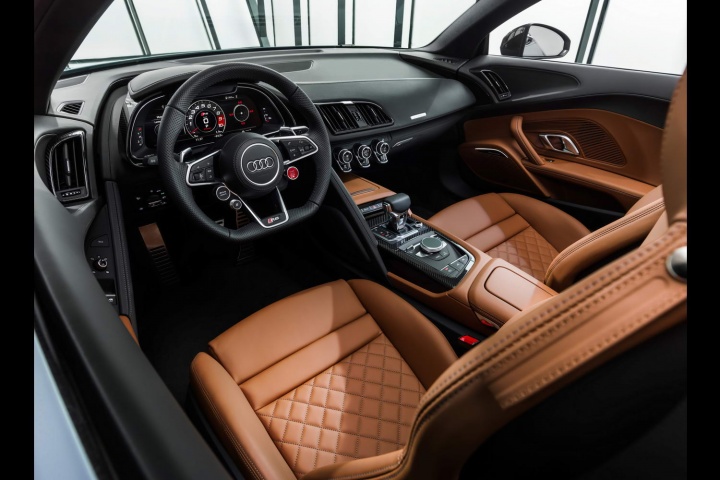 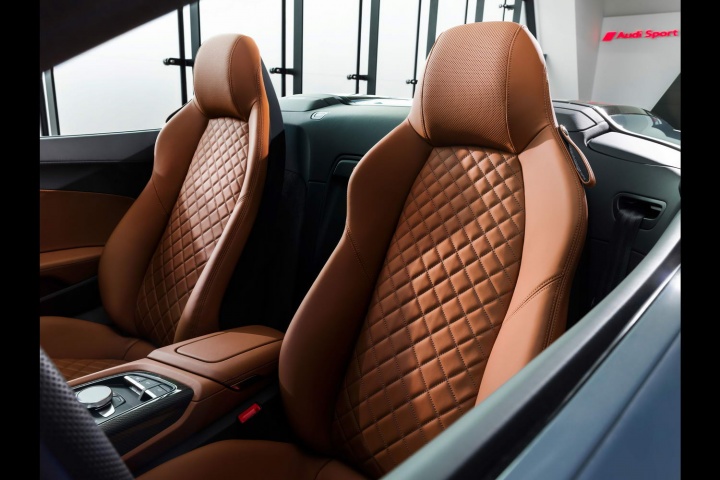 Revised and at its most expensive, does the ultimate 2019 Audi R8 still make sense?

We've already tried the updated second-generation Audi R8 in its mesmerising Coupe form, but does it still convince us now it has blown its top as the terrifically expensive Spyder performance?

There's a school of thought that the Audi R8's styling, informed by the old Le Mans quattro concept car of 2003, has been slowly eroding from its original, beautiful form of 2006 to something a little fussier now. Certainly, with the three bonnet slats and the wider 'Singleframe' grille, the R8 looks a lot more aggressive in its 2019 model year shell than it ever has done before. However, we're not in the detractors' camp; there are still so many details on it that deserve singular attention, like the wonderful design line that runs from the inner corner of the headlamps and over the wings, segueing into the door's swage crease as it goes. Or the rear-end aspect, which looks suitably wide, mean and purposeful, especially with its whopping twin-oval tailpipes. Put it this way, we're big, big fans. And so is nearly everyone else in the general population, because this thing has a presence that is borderline neck-snapping, if the reaction of bystanders and other road users across the course of a week is any yardstick to go by.

The interior, though, retains the foibles that have always irked us about the R8. Oh, ergonomically speaking, it is - in the main - magnificent. Everything's laid out splendidly, while the Virtual Cockpit finds its absolute apogee in this Audi application, because there's no central display to supplement it (also meaning that the rotary MMI controller on the console is somewhat redundant, because you just use the wheel-mounted buttons instead). There's also no criticism of the way everything is bolted together, and the materials used. And yet... does it lack a bit of theatre? Is there enough showmanship here, for a car knocking on the door of three-hundred grand? Yes, the minimalism of the cabin means it feels very driver-centric, with zero distractions to the task of guiding this mid-engined missile down the road unfurling in front of you at a serious rate of knots, but compared to the machined grandeur of a McLaren's cockpit or the brazenly extrovert interior of the closely related Lamborghini Huracan, it's rather sombre inside the Audi. Also, the Spyder loses a bit of cabin space when compared to the R8 Coupe, to accommodate the folding roof; as a result of this, and a vertical rear bulkhead, taller drivers (and passengers) can never quite get 100 per cent comfortable in the Spyder's somewhat intimate cabin.

We might as well get the obvious out of the way first: the R8 Spyder performance is quite devastatingly fast. Seriously, it's a rocket mounted atop a set of Pirellis. That mid-mounted V10 has to surely go down as one of the greatest combustion engines committed to production, because its considerable reserves of power are accessed by a rapier-like throttle and a seven-speed automatic that's as close to faultless as a transmission can be. This means you can apportion out the horsepower and torque with fastidious, scientific precision; it's a breeze to drive the R8 smoothly and slowly, but as soon as you need some of its ridiculous thump, it's there for you on a plate, provided you flex your right ankle a few millimetres further down.

The noise, too, is deserving of every superlative going. You've got a ten-cylinder engine, unfettered by turbos or messy forced induction, mounted a matter of inches behind your head. If you can't be excited or stirred or simply gobsmacked by the mournful, howling, off-key soundtrack the R8 Spyder performance doles out, from about 4,000rpm upwards, then you've got something seriously wrong with you. There are few road cars built, in the entire history of the automotive industry, that can serve up a symphony as glorious as this and we don't even care that it seems just a bit too obviously enhanced at 4,500rpm, as valves in the exhaust open to make it go 'MAXIMUM WAAAAAH'. The R8 Spyder has a sublime voice, and that's an end to any discussion on the matter.

And vice-free handling, too, if we're honest. Yes, you could pick slight holes with the way it turns in (there's still a trace feeling of nose-heaviness to the R8, which is ridiculous given the nose houses nothing more than the headlights and a feeble luggage compartment) and the fact it's quite a flattering chassis, which will make merely average drivers look like gods, but seriously - a 620hp, open-topped, mid-engined supercar has no right to be as useable, as agile and as downright enjoyable as this. The quattro four-wheel-drive system is an ally, not an enemy, as it allows the R8 Spyder to exploit its simply colossal traction and mid-engined balance to the utmost, making it almost as fast through the corners as it is in a straight line. There are cars that have a little better steering than this, or more mobile rear ends, or slightly superior damping, but few that blend together all the Audi's incredible talents into one package so cohesively and so easily as this. That's supreme engineering skill, in and of itself.

Naturally, as an Audi (even an extreme example of one), the R8 can play the pussy cat. Thick, quilted hood up, cruise control on, dampers slackened off to the softest and the stupendous (optional) Bang & Olufsen sound system thrashing out your favourite tunes in crystal-clear, high-volume clarity, you can tick off many, many kilometres in fuss-free simplicity in the R8. The GT side of its dichotomous character is exceptionally good, and we even managed to achieve 22.4mpg (12.5 litres/100km) on one long, steady run... which is hardly planet-saving stuff, but it remains remarkable for a 620hp, near-330km/h machine like this. And possible because the V10 shuts off half of its cylinders on a trailing throttle, in order to save a few drops of fuel.

It's not faultless, though. We're not the sort of Draconian driving enthusiasts who abhor a convertible - in fact, we think there are plenty of cars where the open-top model is the one to go for, instead of the equivalent coupe. But the R8 isn't one of them. Aside from the cramped cockpit, out of the corner of your eye you can see the windscreen frame wobbling about as the Spyder traverses rutted roads; it's not awful, but it's certainly noticeable. Furthermore, there's the sheer expense of the thing. It's not just a little bit more than the dynamically superior Coupe, it's 23,000 Euro further up the financial tree. And, as barnstorming as we think this updated Spyder is, our favourite Mk2 R8 remains the beguiling RWS, a car that was a little more involving at the handling limit than the quattro-equipped performance. And the RWS was sub-€200k... not exactly cheap, of course, but about 66 per cent the price of this particular R8, before any options are taken into consideration.

While you get a tremendous amount of posing power, noise and performance from the Audi R8 Spyder performance, you also have to pay a stonking premium for the 620hp version of the open-topped vehicle. There's a €22,930 hike for going from an R8 Coupe to the Spyder body, while you need to find another €32,990 for a 'performance', over and above a 570hp derivative. All of which means the Spyder performance is almost €56,000 more than a 570hp Coupe, which is a whole Audi A5 Coupe more cash. Start adding options to the Spyder, and its price will be pushed well beyond €300,000 before you know what's happening.

Look, the Audi R8 Spyder performance has one of the all-time great engines stuffed into its midriff. Also, while we are sure some sniffy aesthetes might lament the current exterior styling, we think it still looks magnificent and, dynamically, it's easily Audi's finest production ever. Which is not merely the R8 clearing a low bar, mind, as we think the Audi can stand comparison to some of the greatest drivers' cars of all time. But this 620hp convertible isn't quite the apex of the R8 breed - it's too expensive (even allowing for the rarefied market sector it competes in, where money is no object) and too compromised to receive the highest plaudits. However, as a sensational all-round automotive experience, there's little doubt the R8 Spyder performance is among the highest possible echelons of technical achievement, because it's marvellous. 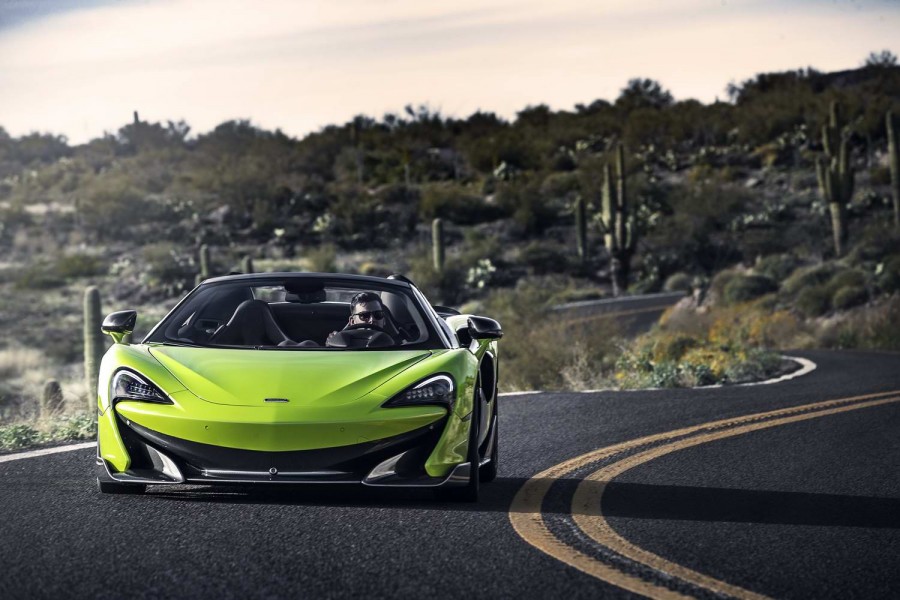 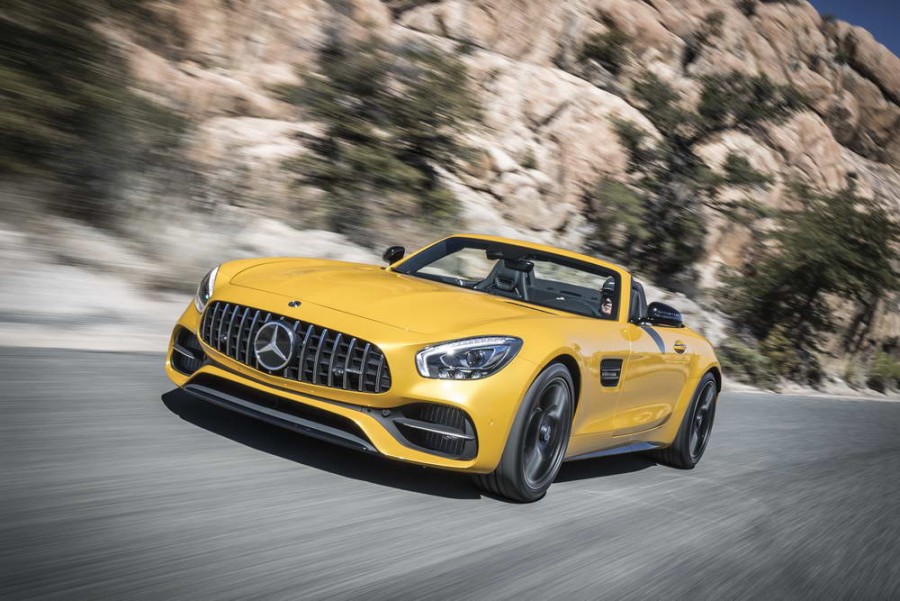