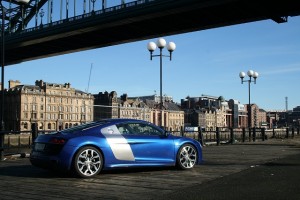 Audi's R8 is now regarded as one of the finest sports cars in the world. It combines outstanding performance with exceptional build quality and refinement. Here is a supercar that you can actually live with, and if the 420hp 4.2-litre FSI quattro V8 model wasn't enough, then Audi went one better in late 2009 and added the option of a 5.2-litre V10 engine. That meant an extra 105hp, an additional 100Nm of torque for the sake of 0.7 seconds in the 0-100km/h time and a 15km/h greater top speed - all for an extra €52,740. Crazy? Perhaps not.

The car has finally made it Ireland and we were among the first to get our hands on the keys. The R8 V10 arrived shod with 19-inch alloy wheels and Jet Blue metallic paintwork. It's gorgeous, with the exception of the large 'sideblade', which in my opinion seems to cheapen the otherwise exquisite design. The car is astonishingly low, but visibility is surprisingly good. It isn't difficult to get comfortable either, unlike many tight supercars.

It takes a while to get used to the attention that the R8 commands, as the reaction from most people is one of pure astonishment. The R8 looks like a concept car - something straight from a motor show. It growls and snarls while those LED lights slice their way through the dull Dublin morning. Guys in white vans wail out the window. Man, woman and child stare.

It has been a week of talking about electric vehicles and the radio stations are buzzing with zero emissions talk. So we took the R8 to Spin 103.8 and attempted to sound eco-friendly with a car that has emissions of 351g/km. It verges on the ridiculous. After that, it was time to rest up the R8 in a secure parking spot because we had a long drive ahead the next day. But not before a spot of fun on our favourite back road to try out the astonishing levels of grip...

You can't and you shouldn't stay still when you're in a car like the R8, especially with the V10 engine and good weather, so it was time to stretch this car's legs. Wexford was our first port of call. Set the car's cruise control at 100km/h and 20-25mpg (14.1-11.3 l/100km) in old money is possible. We filled up the car earlier for €88, which wasn't quite as harmful on the wallet as expected. Yes, at 100km/h it feels like you're hardly moving, but it also means that it now has a range of around 600km on one tank.

The road from Wexford to Cork is new and very improved, so it's a great place to test the R8's mettle. This is the most confidence inspiring supercar around and it could readily top anyone's list of favourite cars. It really has it all - breathtakingly good looks, superb construction and a great cabin. It's also easy to drive but brutally fast when you want it to be. And yes, you really can live with it every day. If you had the money, that is, which is more than most people pay for a modest house these days. For that reason, we know that it will be a rare sight on Irish roads. But as an example of just how good a car can be in 2010, this is one of the finest examples available.