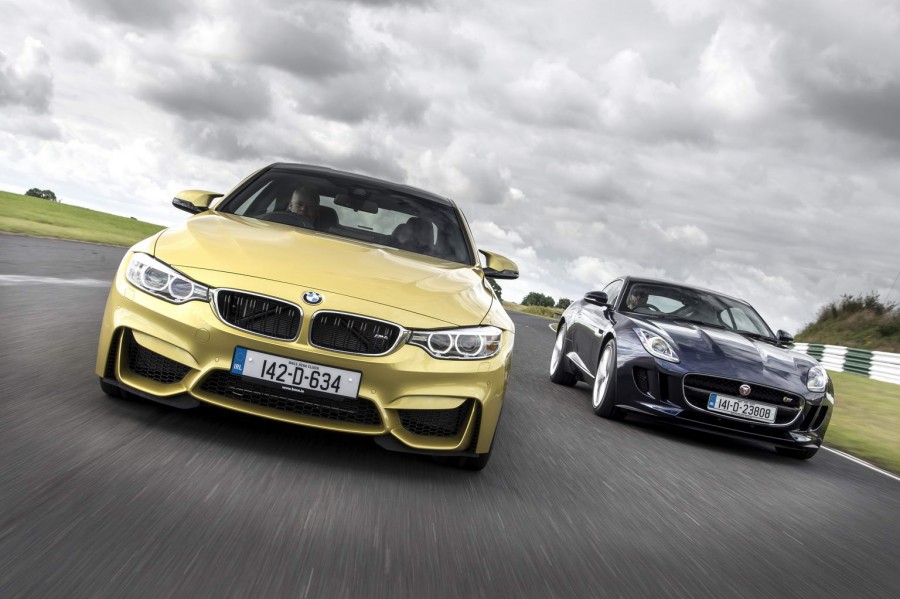 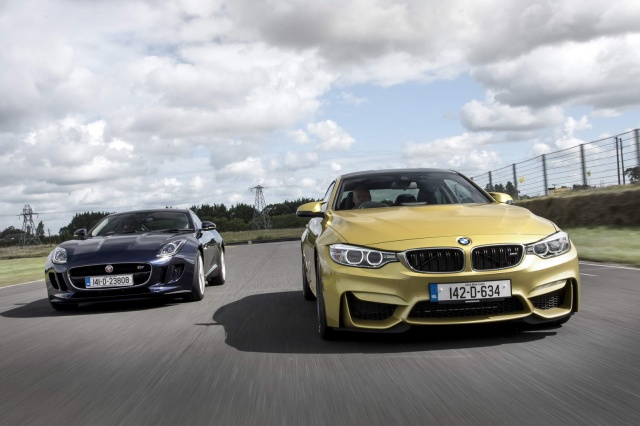 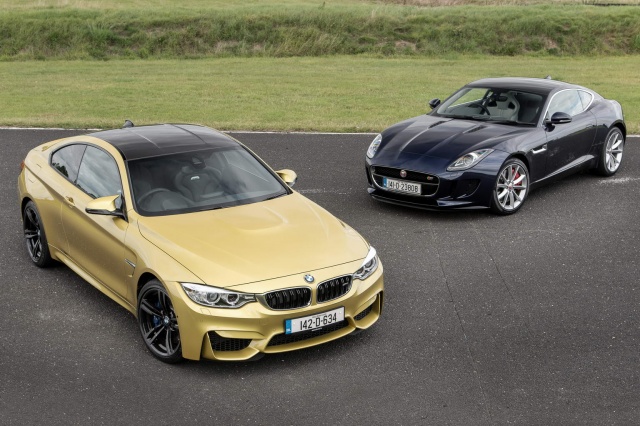 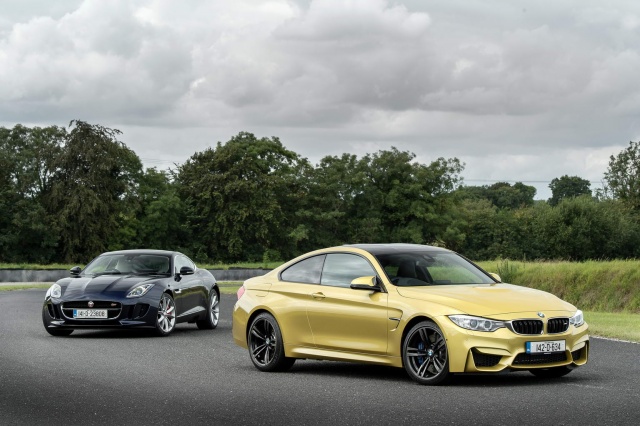 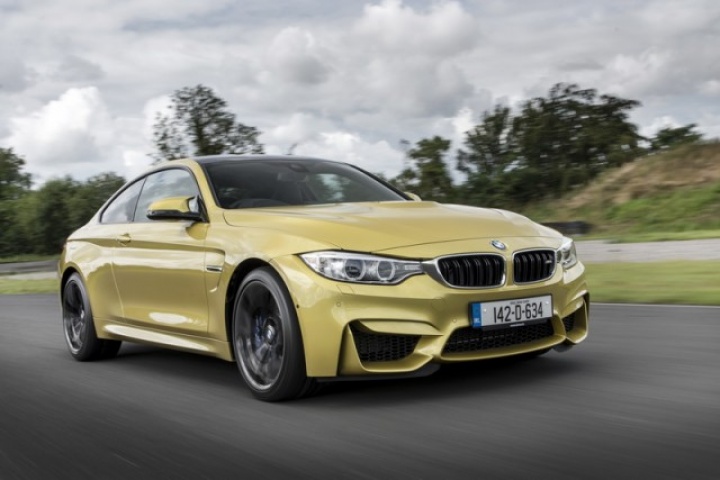 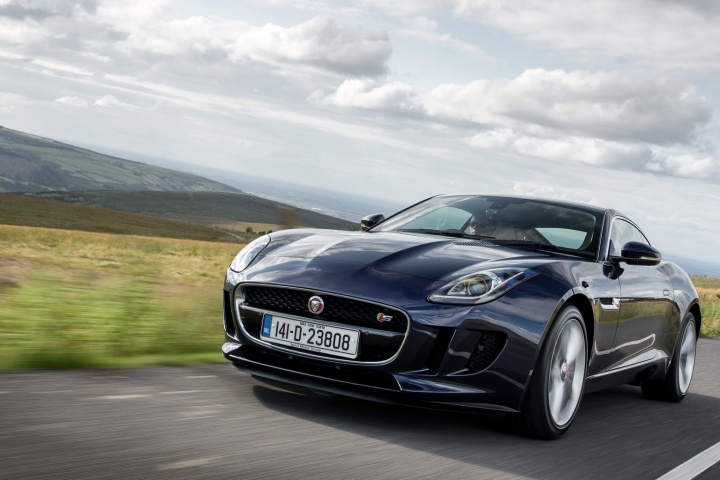 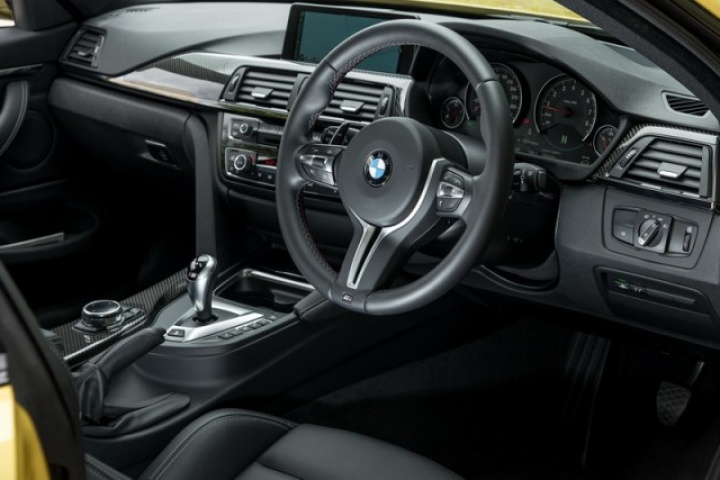 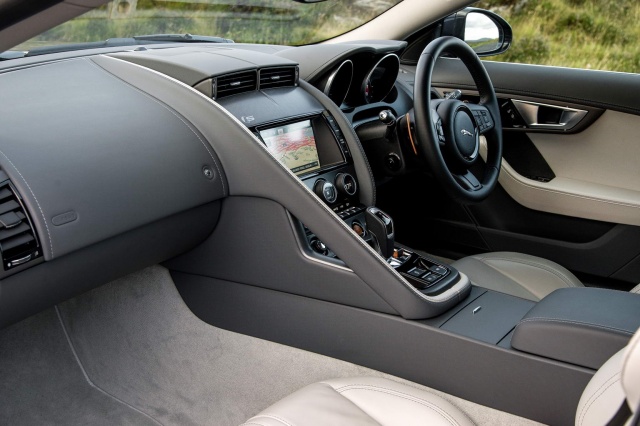 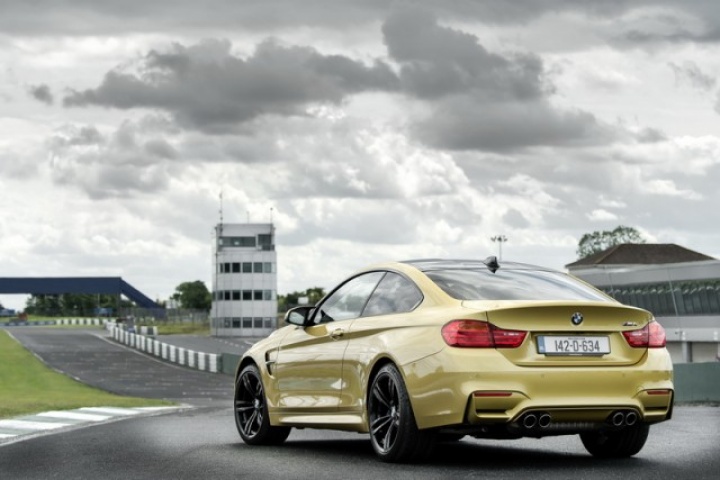 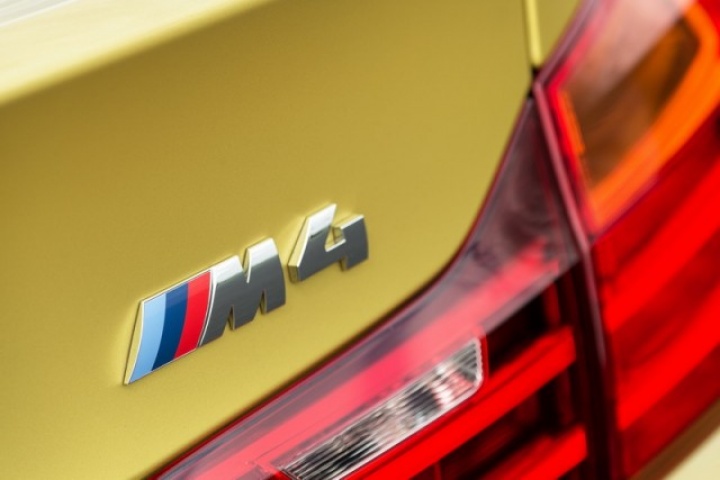 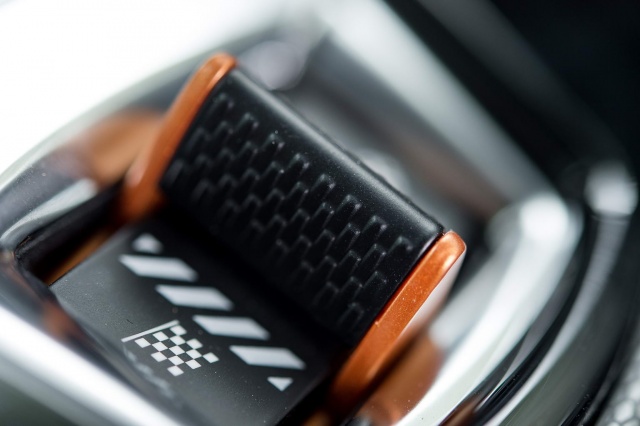 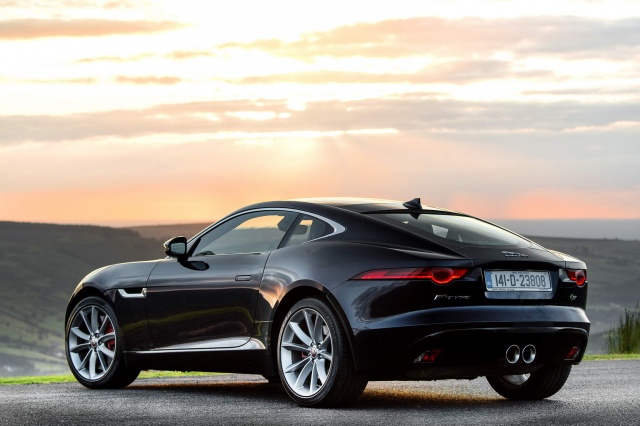 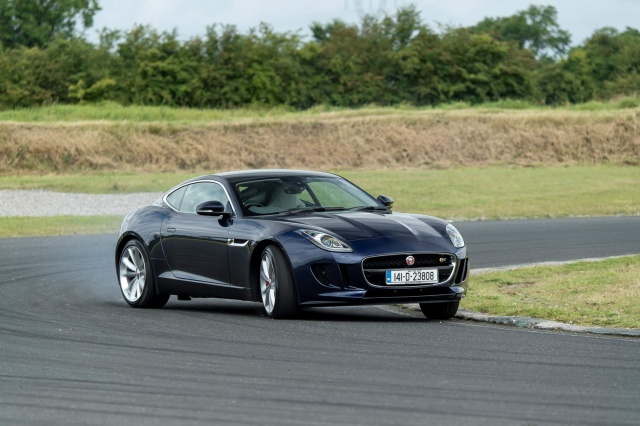 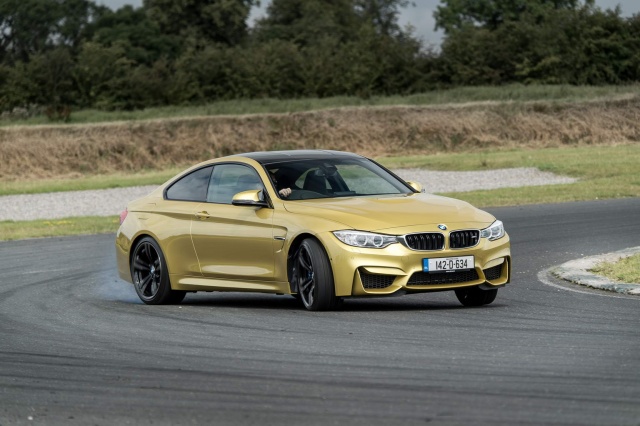 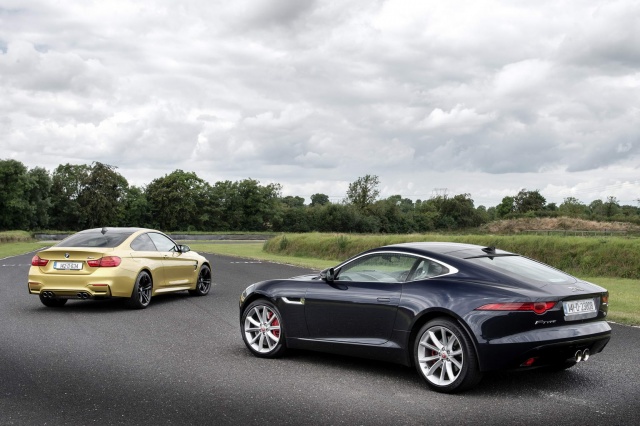 Although these cars are very different in personality, their pricing pitches them up against one another. Can we choose a favourite?

Both cars are two-door coupes, but the visual similarities end there. Where the Jaguar is all feline curves and delicate detailing, the BMW is muscular and aggressive. Because the F-Type doesn't share its basic body shell with any other car (as the M4 does with lesser 4 Series Coupes) it stands out as the most special looking, drawing admiring glances from all and sundry. Yet up close, the BMW exhibits obsessive attention to detail by its designers, engineers and aerodynamicists. While the average person on the street may not give it a second glance (this sentence doesn't apply if the M4 is painted in the searing yellow colour shown on this page), its characteristic M details such as the quad exhausts, subtly bulging bonnet and wheelarches, gorgeous carbon fibre roof and the huge air intakes up front are enough to have anybody that knows about cars drooling.

While we expect the exterior design of these cars to divide opinion fairly equally, we reckon most will favour the cabin of the BMW. Although its architecture is shared with the 4 Series Coupe, the bespoke M elements, such as the steering wheel, dials, stubby gear level, pedals and sports seats, set it apart, as does the carbon fibre trim. It exudes quality and puts the Jaguar's cabin to shame with its nigh on perfect switchgear and usability.

In isolation, the F-Type's cockpit is good. It feels well-made and quite special. In the S version this is enhanced by the addition of copper-coloured (and rubberised) gear shift paddles and start button, though we found the automatically lifting air vents a little unnecessary. It's a comfortable cabin though the touchscreen system isn't the best on the market.

Finally, the BMW is far more practical. Its easy to access boot carries 445 litres, the F-Type Coupe holds 315 litres, though the latter is further limited if you order the optional space saver spare wheel. And of course the M4 has decently sized seats for two rear passengers, where the Jaguar has none. Clearly that won't matter to all buyers, especially in this part of the market, but it will to some, and they'll immediately rule out the F-Type.

We were lucky enough to try both cars in a variety of conditions, from the safe confines of Mondello Park race track to the wilds of the Wicklow Mountains in both wet and dry conditions. It was an illuminating test and they're considerably different vehicles. The M4 is very much a full-on M car, with the ability to scare the uninitiated with its hard-edged performance. Saying that, it comes with a wide range of adjustability for several driving systems, which means it really can go from comfortable motorway cruising to race car pace track lapping in the press of a few buttons. In between the extremes it's possible to set up the car to your preferences and the conditions. For instance, on a wet day on twisty mountain roads the softer damping makes more sense, yet we still opted for the more aggressive throttle map. Those that love cars, driving and technology will completely adore all of this and it'll keep an owner entertained for years.

The Jaguar is less digitally enhanced, or rather, that's the impression it gives. Sure there are a few settings for the transmission, steering, throttle map and traction control, but at heart the F-Type is simpler. We suspect that most owners will just jump in and drive it in its default mode, and there's nothing wrong with that either. In mid-range V6S guise it's much more biased to road use than track, which is as it should be. The damping is well-judged, there's loads of feedback through the steering wheel and it's good fun all-round, if not as controlled as the M4. The BMW has more to its character too and, actually, more feedback and communication through the seat of your pants, but the Jaguar is still a hoot.

The F-Type's trump card is its exhaust system. Jaguar has paid a lot of attention to how the coupe sounds and in Sport mode it makes all manner of bangs and pops that only those that love cars will appreciate. We do and we do. The M4, in comparison, makes a very 'senior' sounding roar with plenty of whistles and whooshes from its two turbochargers, but it's nowhere near as melodic as the Jaguar. It's full of intent though and you'll be too busy trying to process the rapidly approaching scenery to worry about the sound it's making anyway. To call the M4 a bit quick is like saying the Atlantic is a bit wet. On the public road, where legal limits, traffic and blind corners keep speeds down, there's not that much between these cars, and in slippery conditions it takes a lot of restraint to prevent the tell-tale traction control lights from illuminating, but on track the BMW leaves the Jaguar for dead.

Saying that, the Jaguar is much more forgiving and predictable when pushed to the limits of its tyres' adhesion. It's beautifully balanced and the long throttle travel makes it simple to place and even drift accurately on track. The extra power and torque of the BMW makes it very easy to overcome the rear tyres' grip when required, but it's a trickier car to balance on the throttle, probably because of the interaction of the twin turbochargers and the electronically controlled limited slip differential. In fairness, stop with the tyre shredding and the BMW is blatantly the better track car, laying down searing lap times and challenging even experienced drivers to up their game.

The performance figures indicate that the BMW is much faster - and it is. Indeed, the F-Type R Coupe would be a better match all-round, but the V6S model is priced remarkably close to the BMW. The vast majority of M4s sold will be fitted with the dual-clutch automatic transmission we experienced, which places the BMW at a retail price of €105,356 (€106,206 on-the-road). The entry-level F-Type Coupe is €93,340, while the V6S is €109,735. In this rarefied atmosphere, just a couple of options will soon bridge the gap.

I hate sitting on the fence for these tests, but this is a very difficult one to call. The M4 and V6S Coupe may be direct price rivals, but the reality is that they're poles apart. It's unlikely that the same buyer would seriously consider these two cars at the same point in his life. While I'm seduced by the F-Type's styling and its naughty exhaust, the M4's broad spread of talent is compelling and I find it the more exciting to drive. It's the one I'd grab the keys to the most often given the choice. Petrolheads the world over should rejoice in the fact that they both exist. I certainly do.

Choosing one of these cars over the other is, as Shane mentioned, no easy task. Both of these cars are very appealing in their own right yet each will resonate with different people. The F-Type is by no means an underpowered car, but dynamically it can't touch the M4, especially when driven hard. However, when you do drive the BMW that bit harder it requires a high level of precision in order to extract the most from it. On the other hand, the Jaguar can be a more forgiving car and over your favourite back road is every bit as rewarding to drive.

Visually, the Jaguar is sublimely elegant and for those who are more image conscious it doesn't disappoint, while the rasp from the exhaust every time you press the starter button creates a sense of occasion with every drive. But, yes, there's a but: the interior of the Jaguar just doesn't live up the quality of what you would expect from a car costing as much as it does, and then there's the impractical nature of it.

Not only is the M4 a genuine four-seat car, it also has a fully-functional boot and although its interior may still largely resemble that of the standard 4 Series it exudes the kind of quality that quietly reassures you of your purchase with every touch of every switch. It is the wild levels of performance that the BMW keeps on tap that makes it a real winner here in terms of pure bang for your buck. There are few race tracks, never mind public roads, where that ballistic performance can be fully exploited, but when you get the opportunity it is beyond impressive and mastering the M4's power is a thoroughly rewarding experience.

As drivers' cars go the BMW M4 is the clear winner. It offers supercar levels of performance in a car that is, to a degree, still relatively discreet - depending of course on your choice of hue.