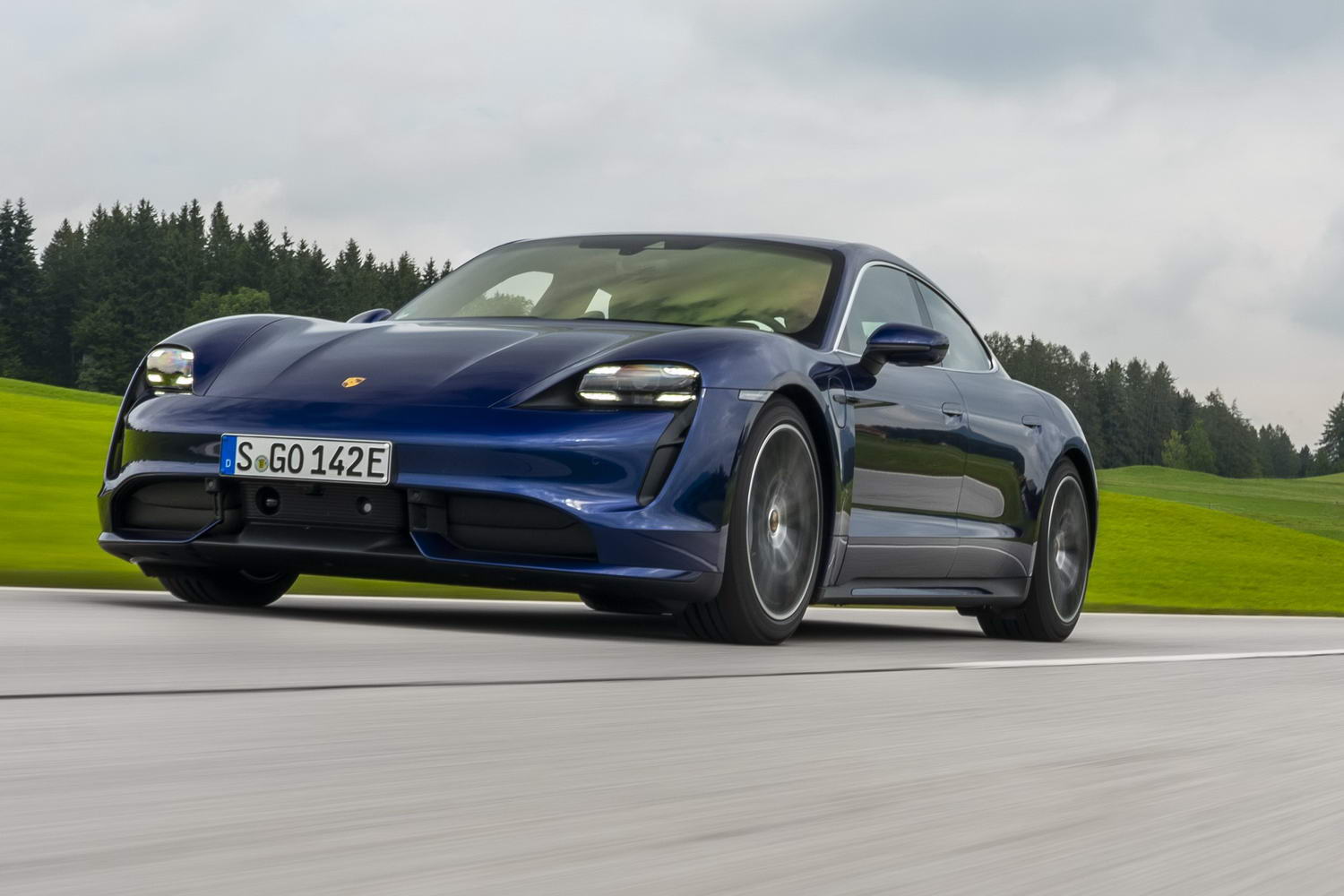 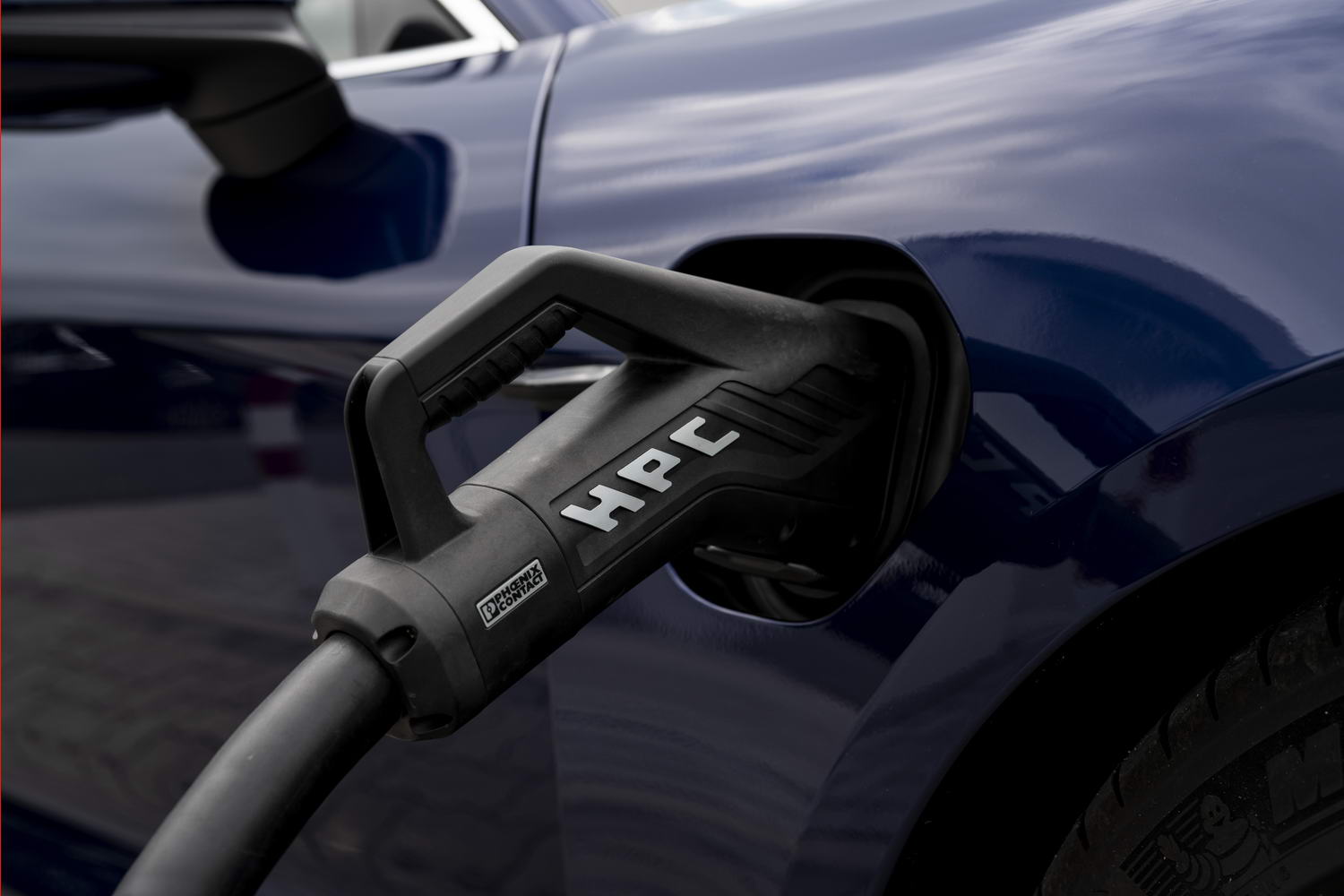 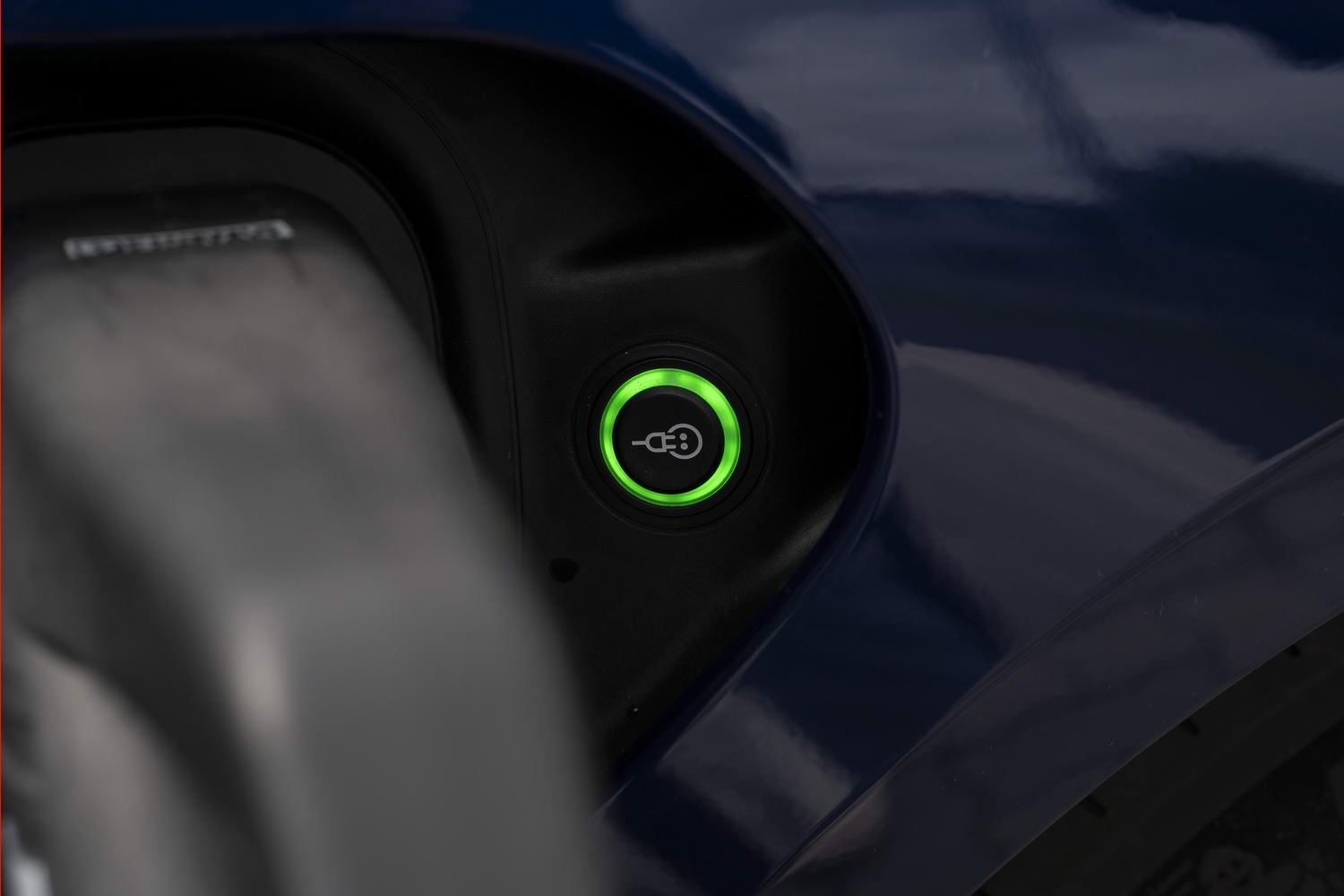 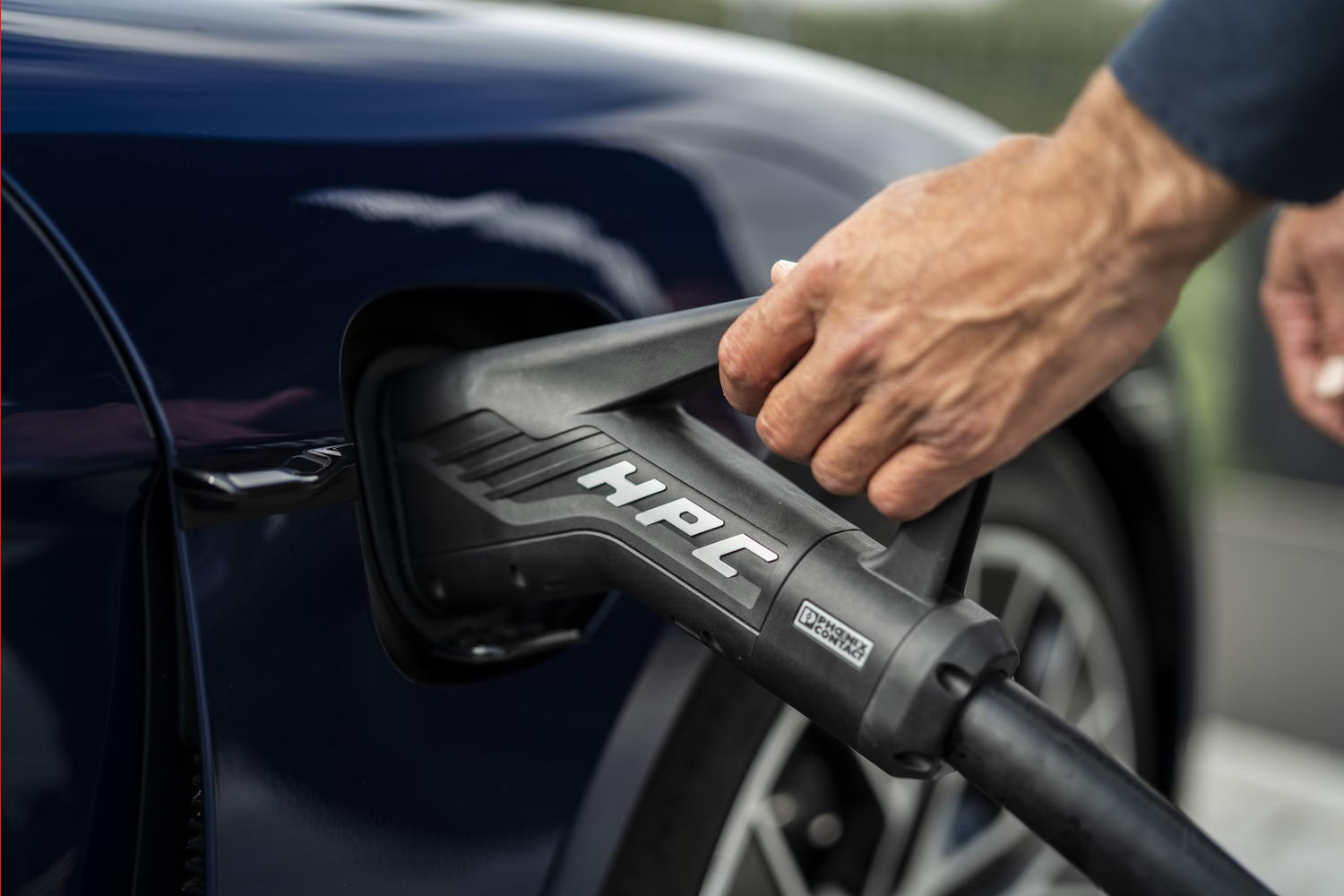 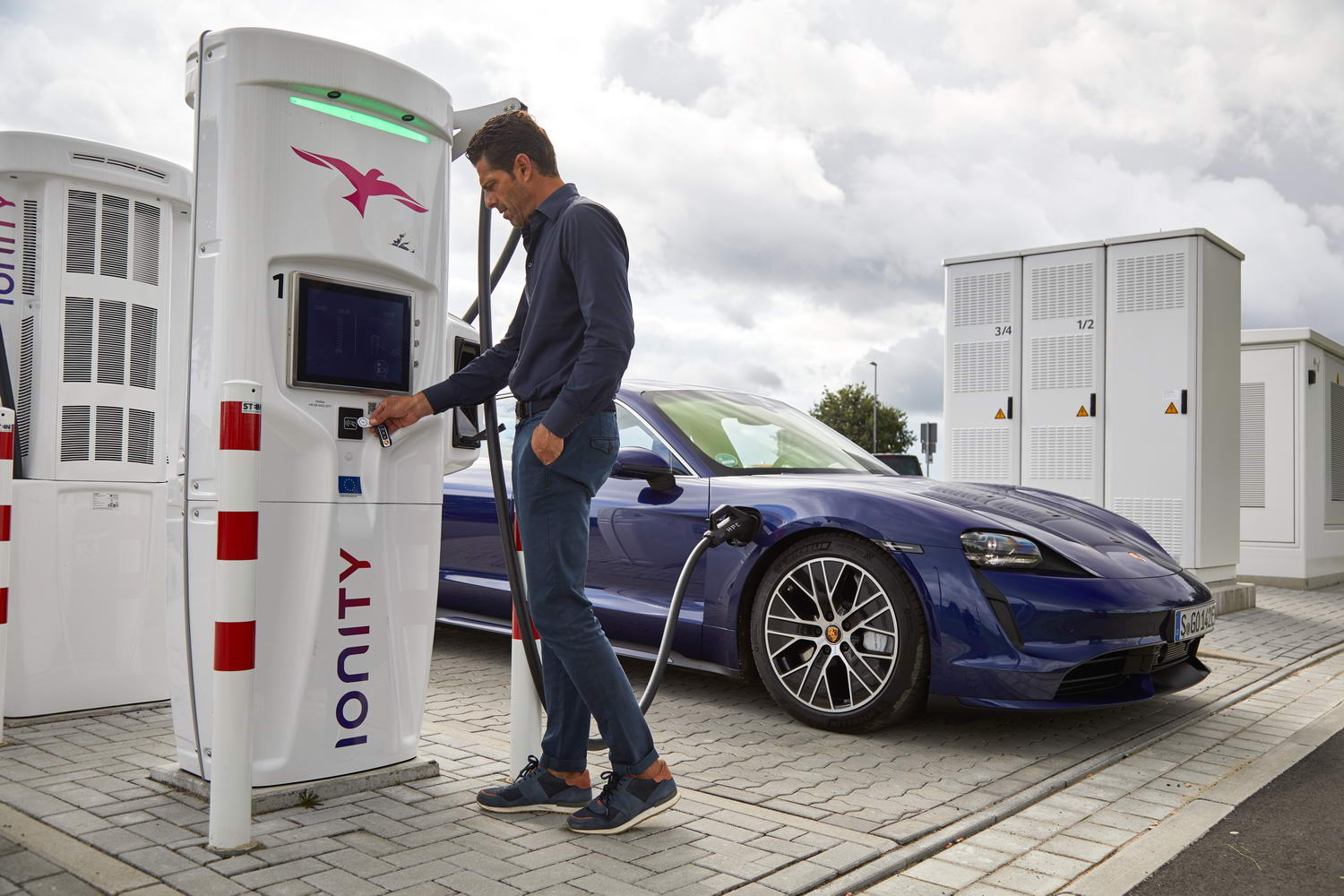 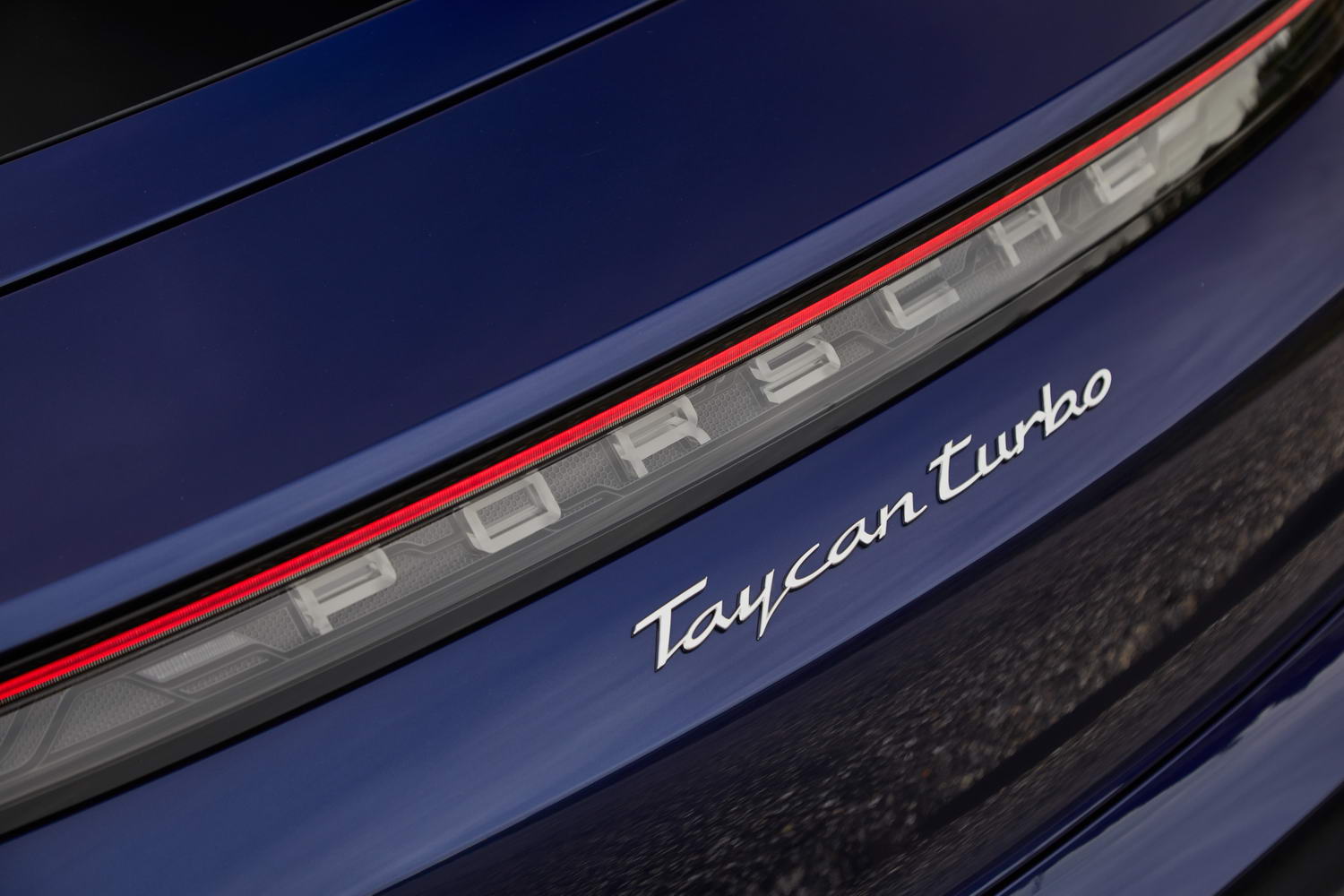 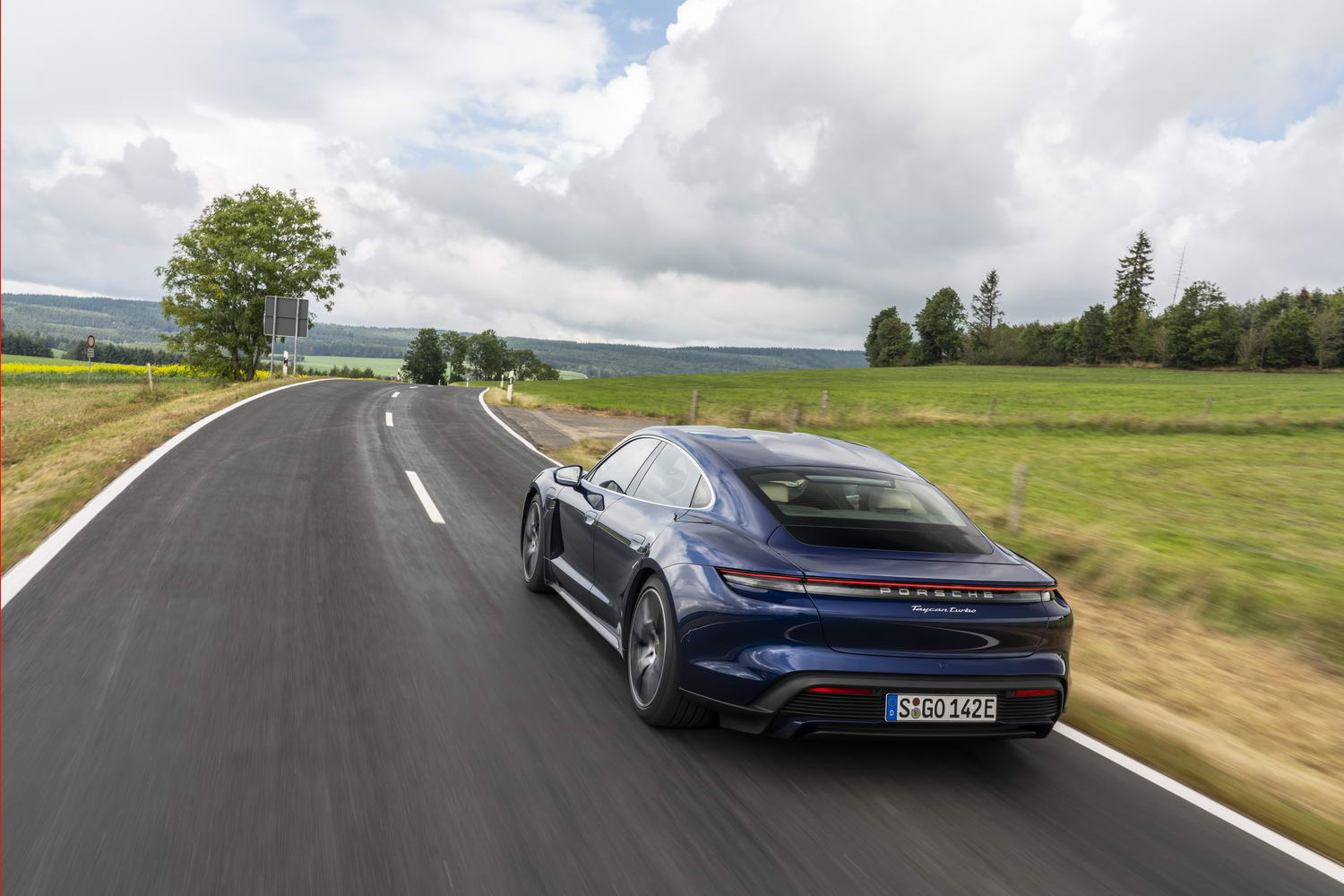 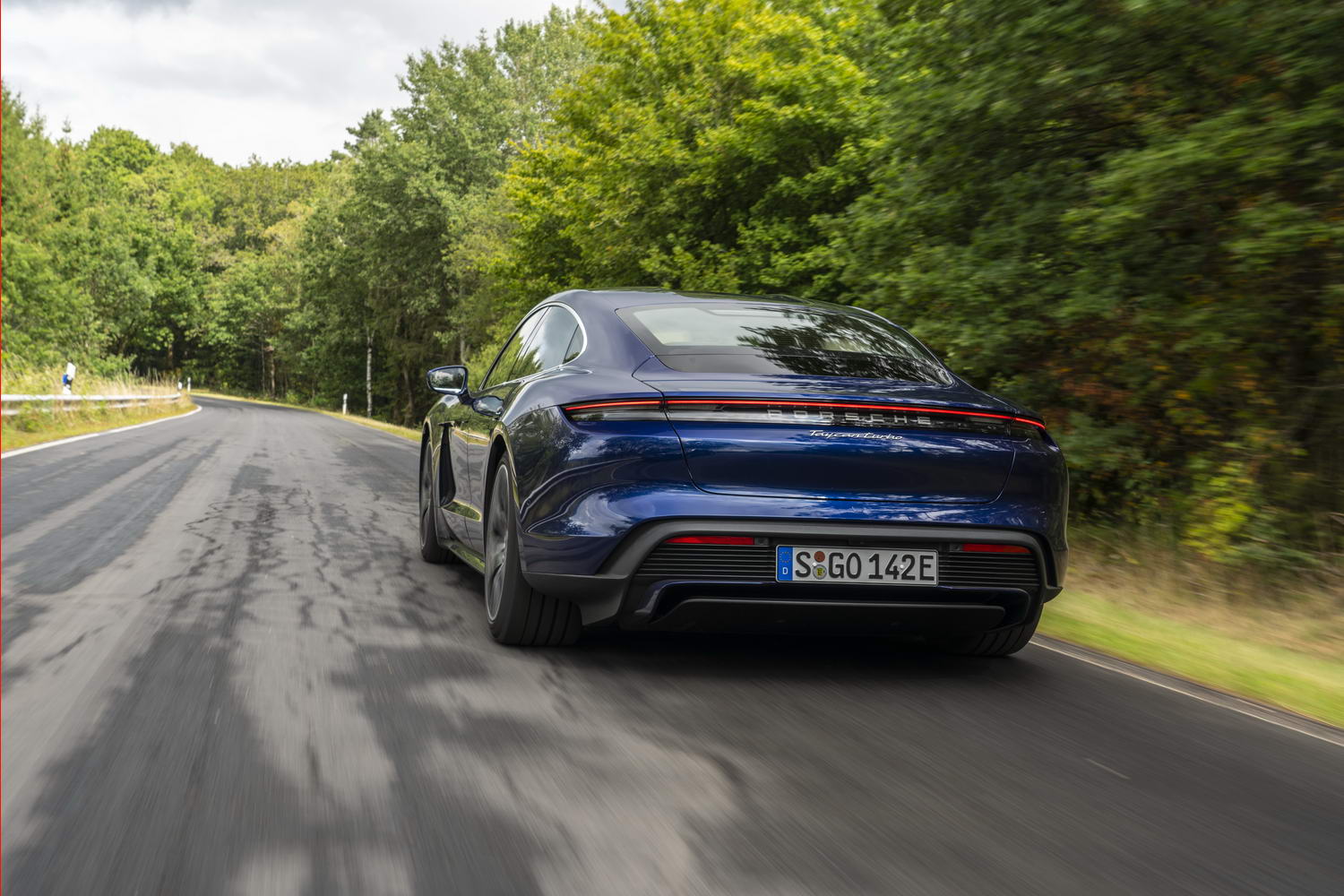 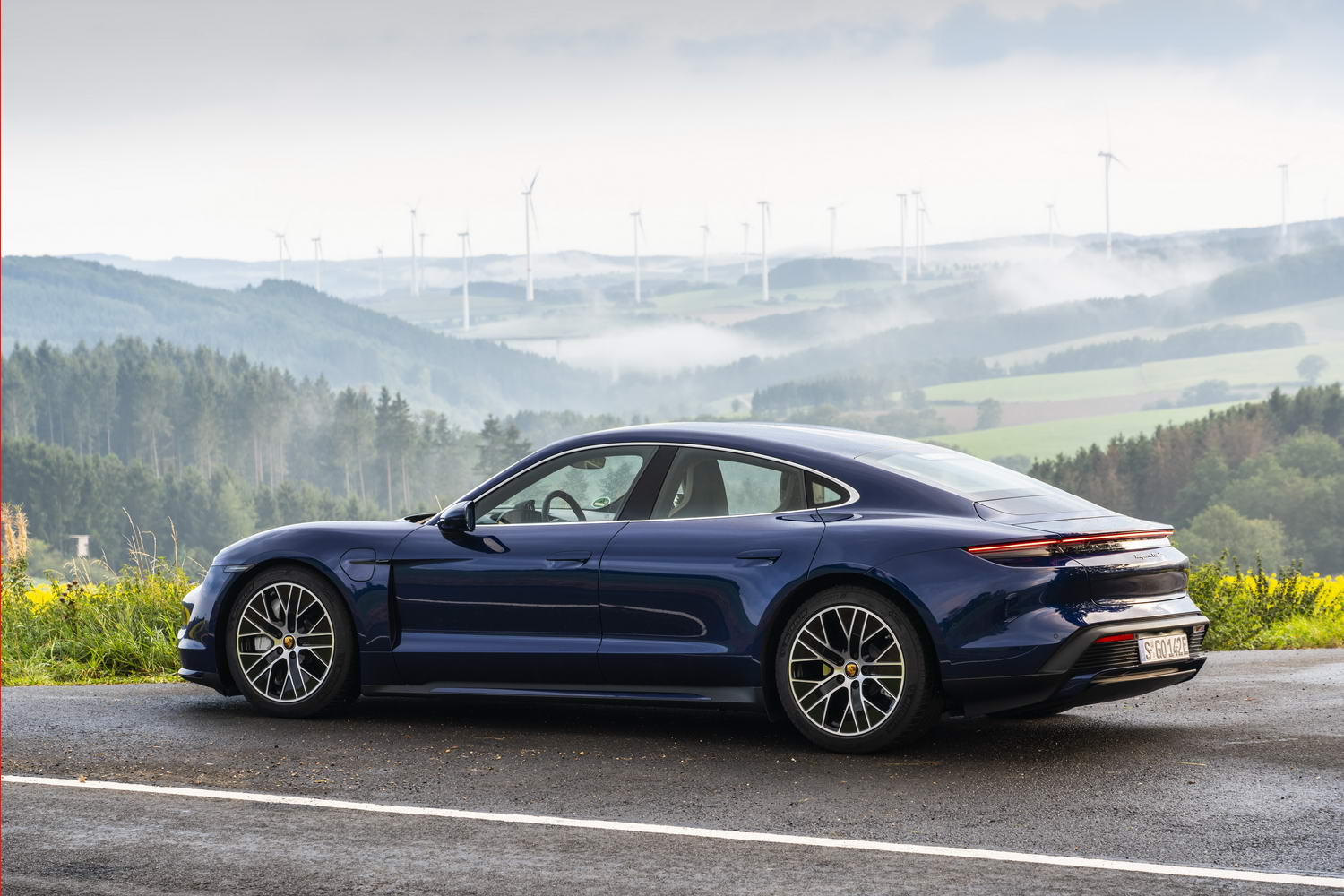 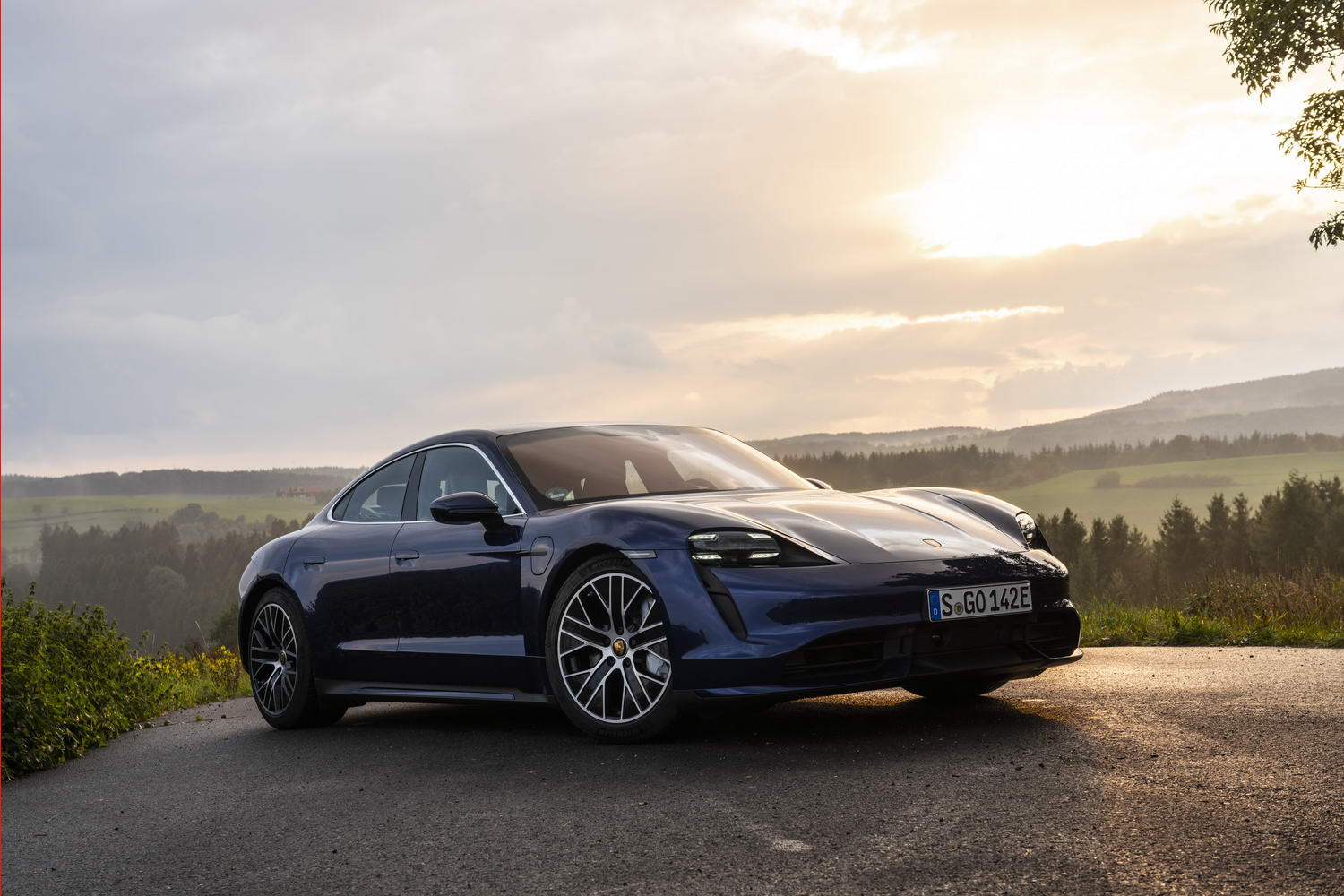 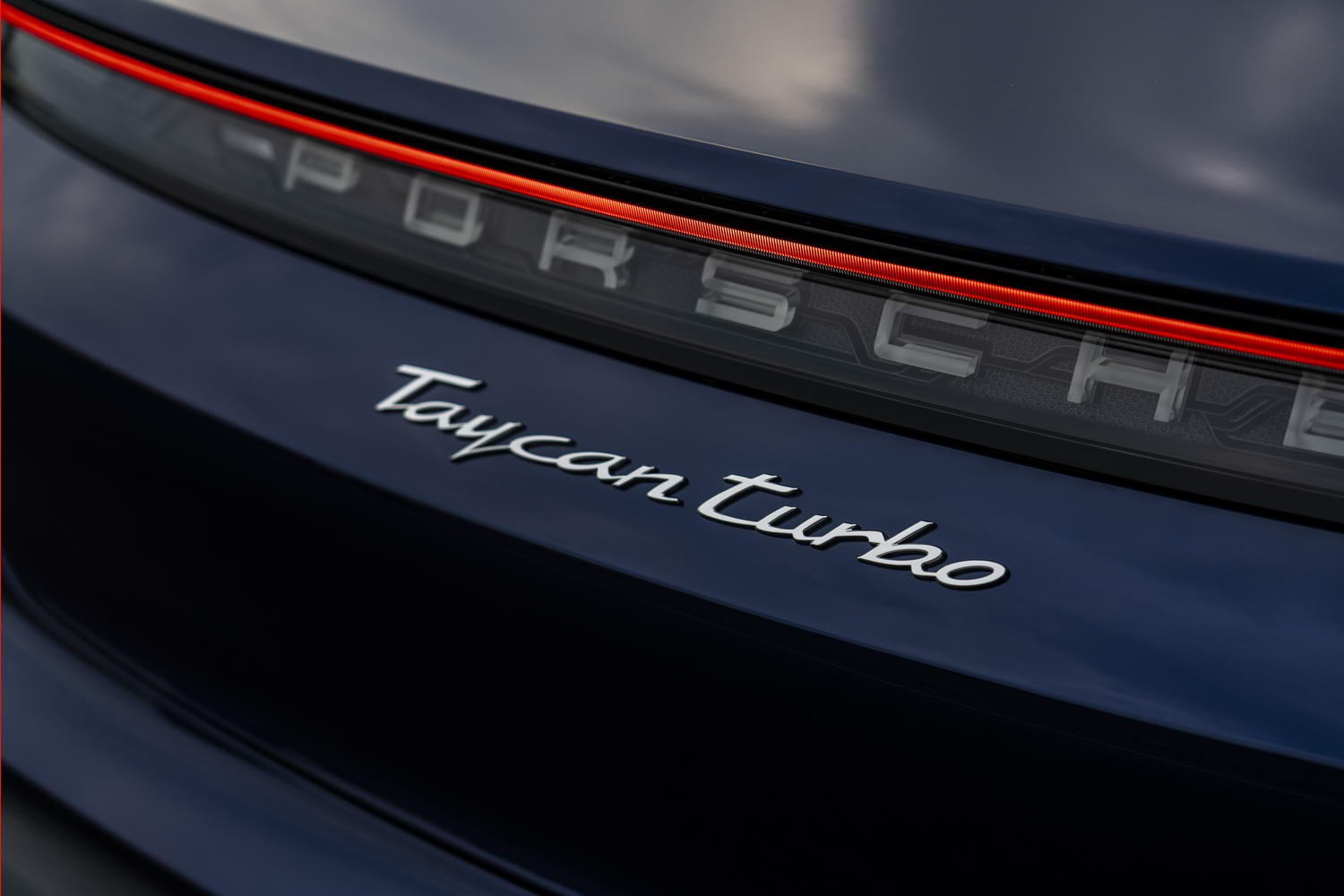 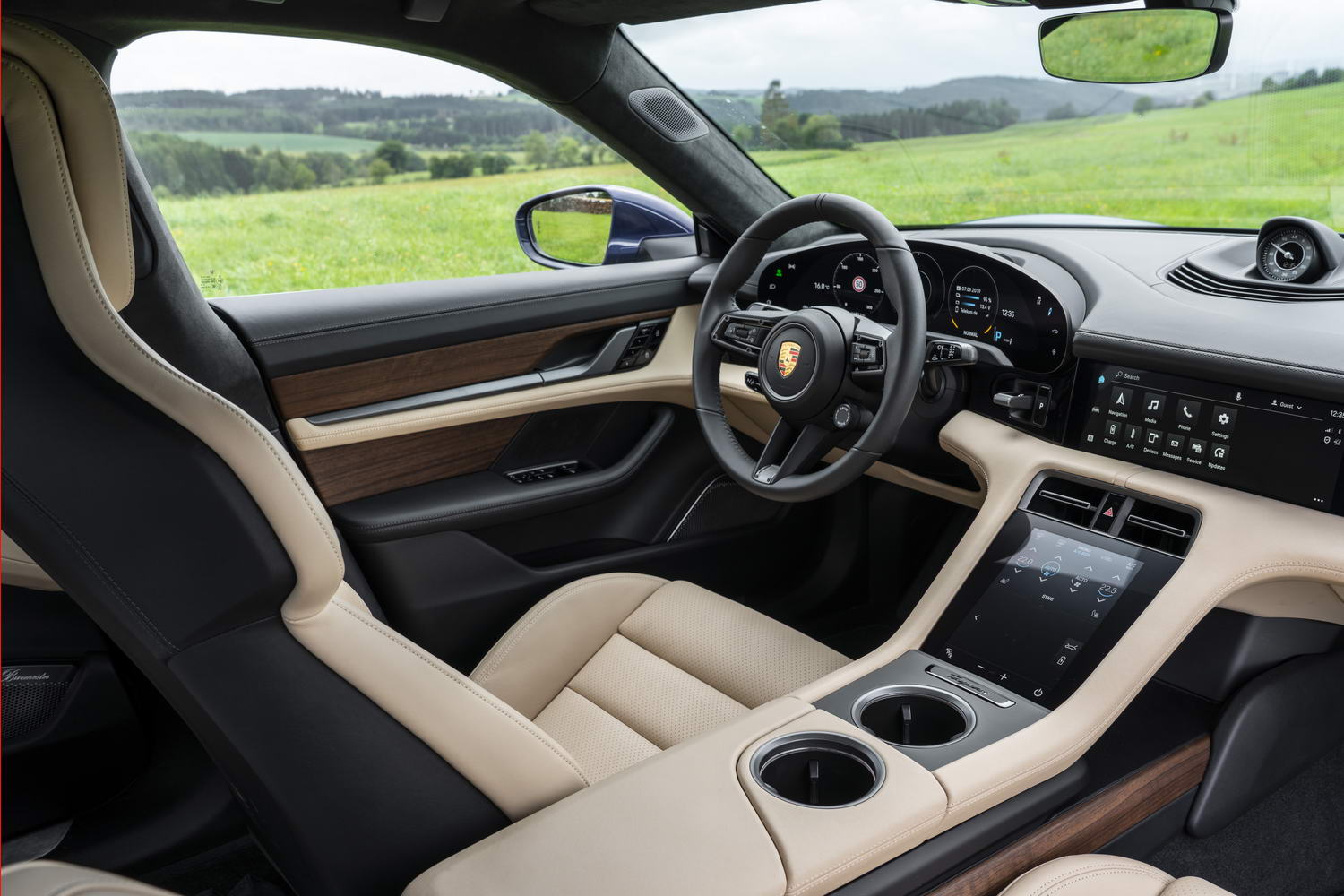 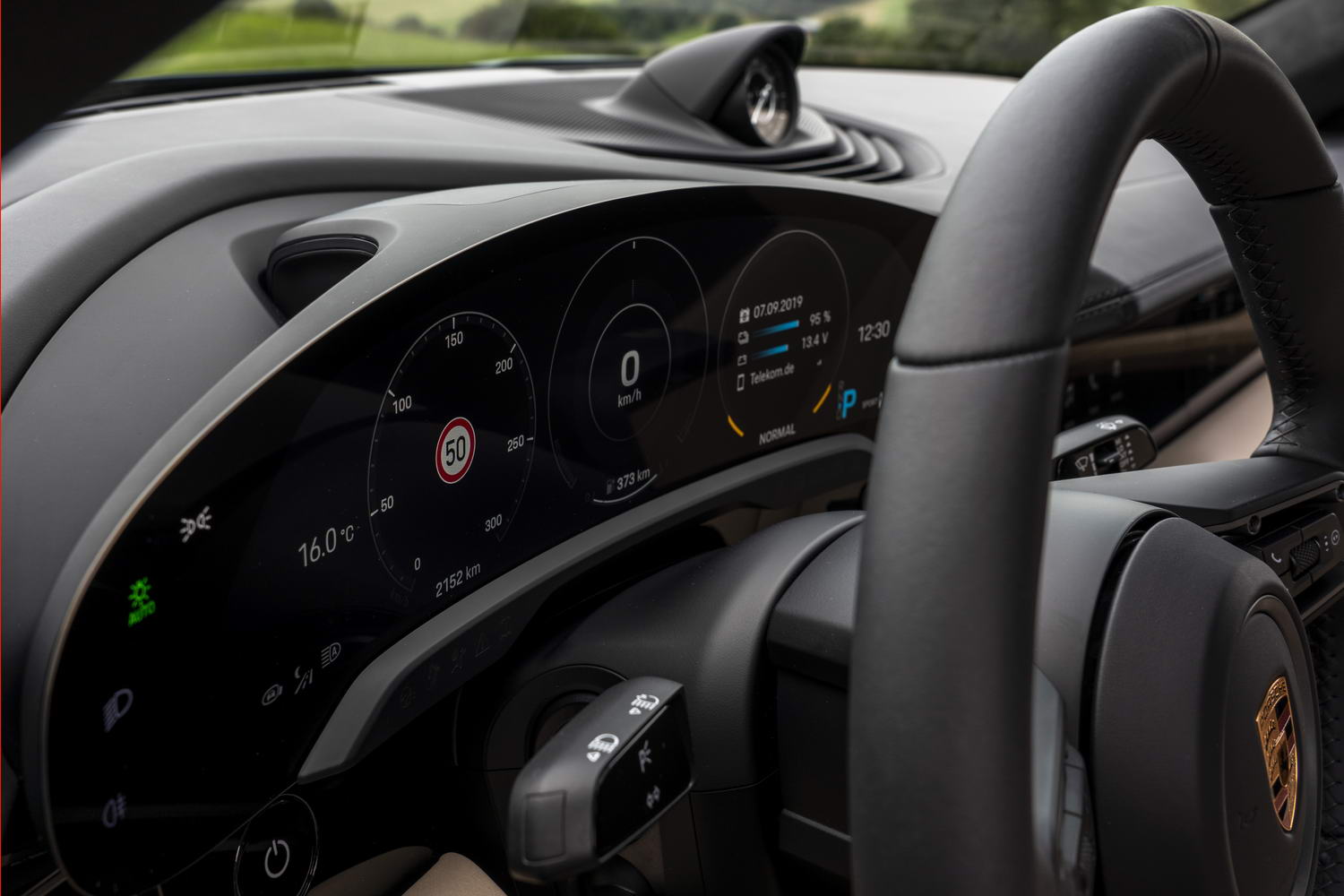 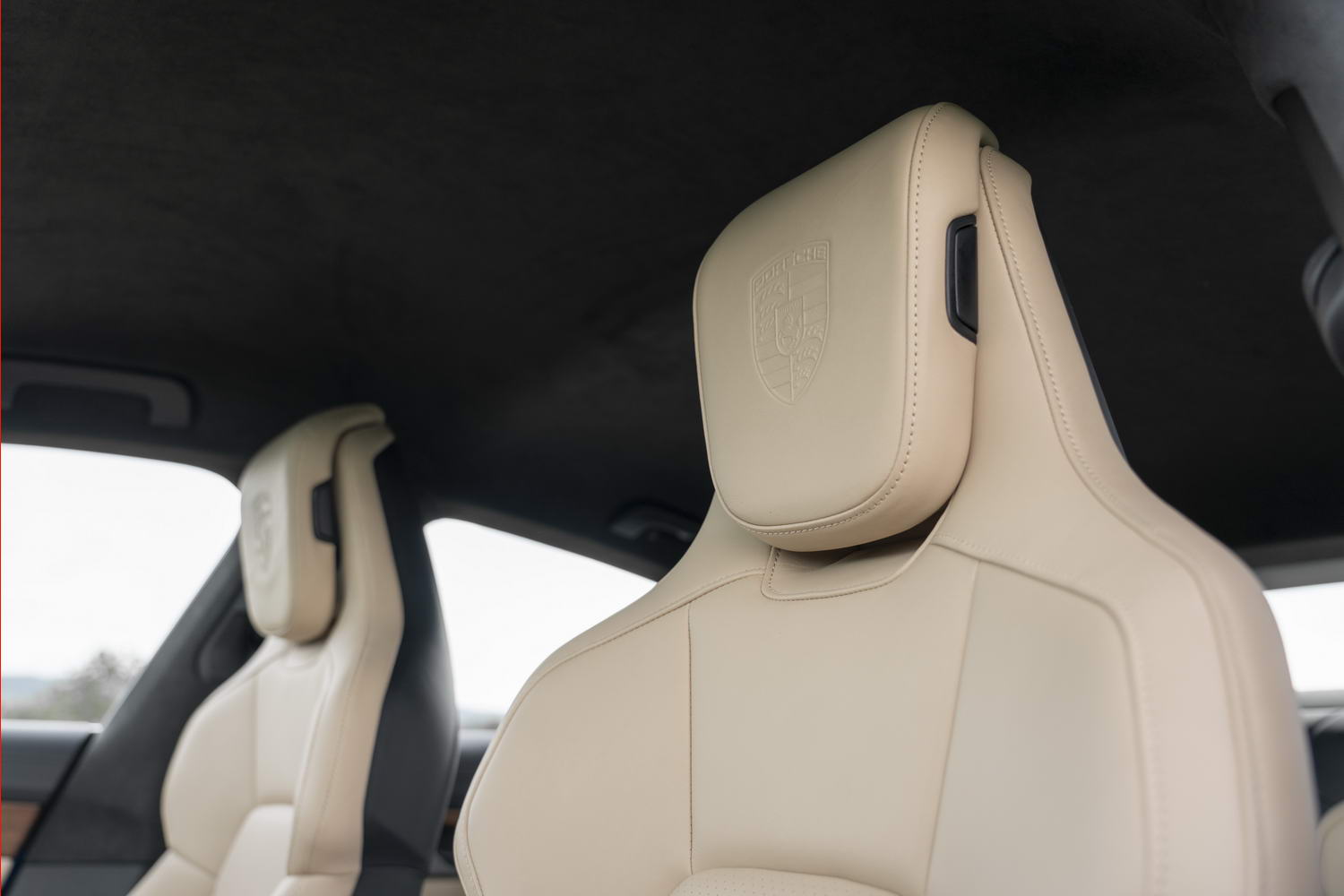 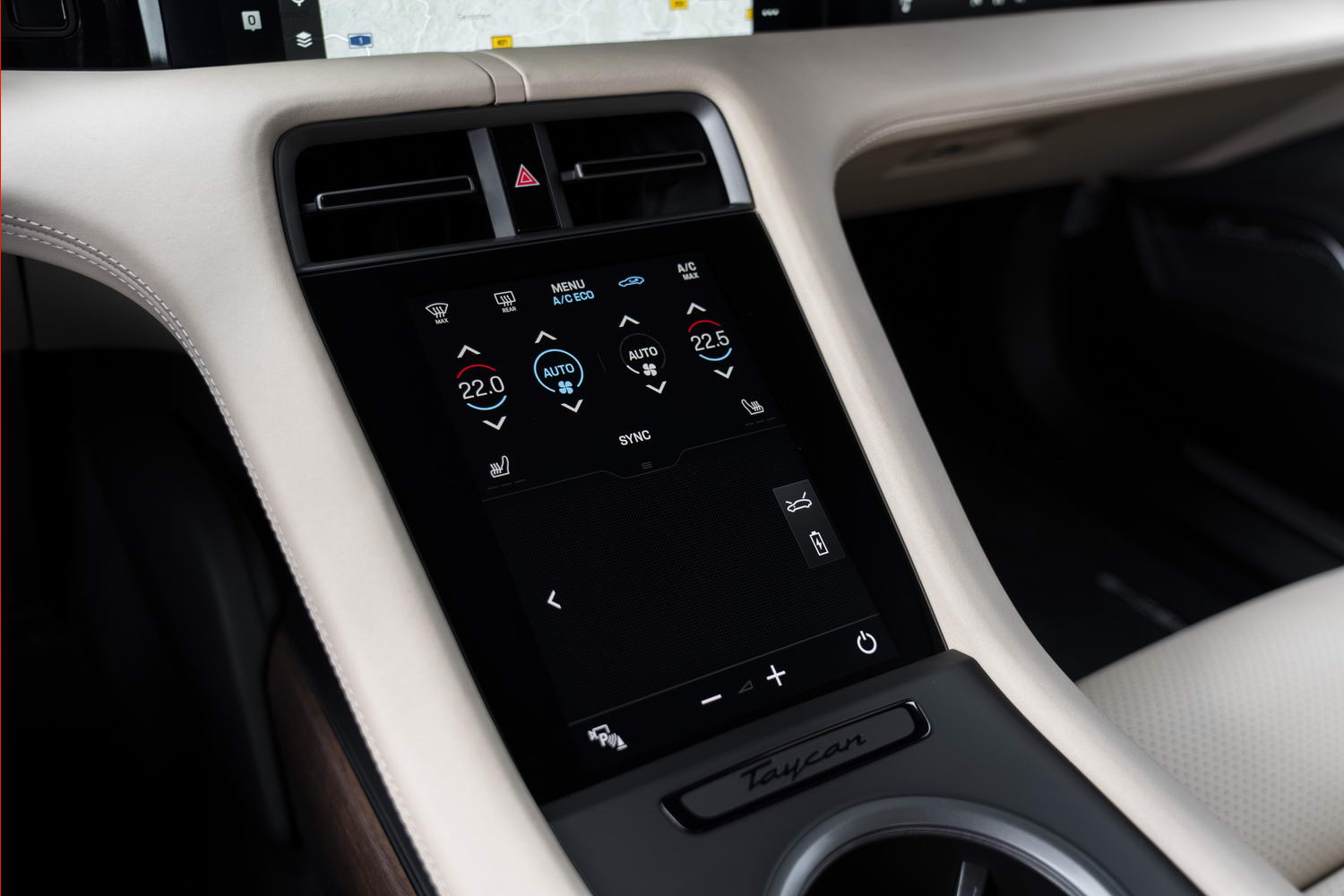 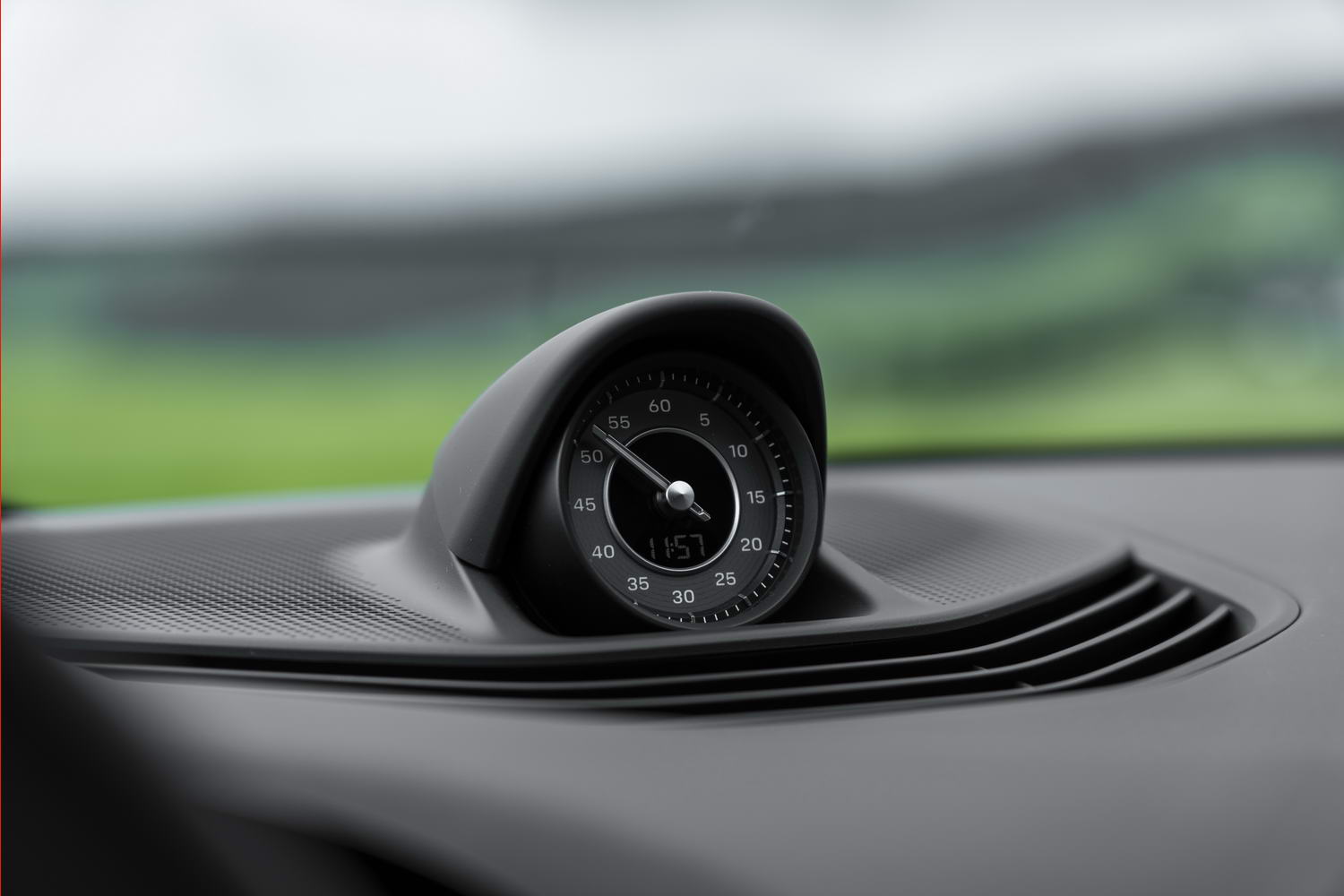 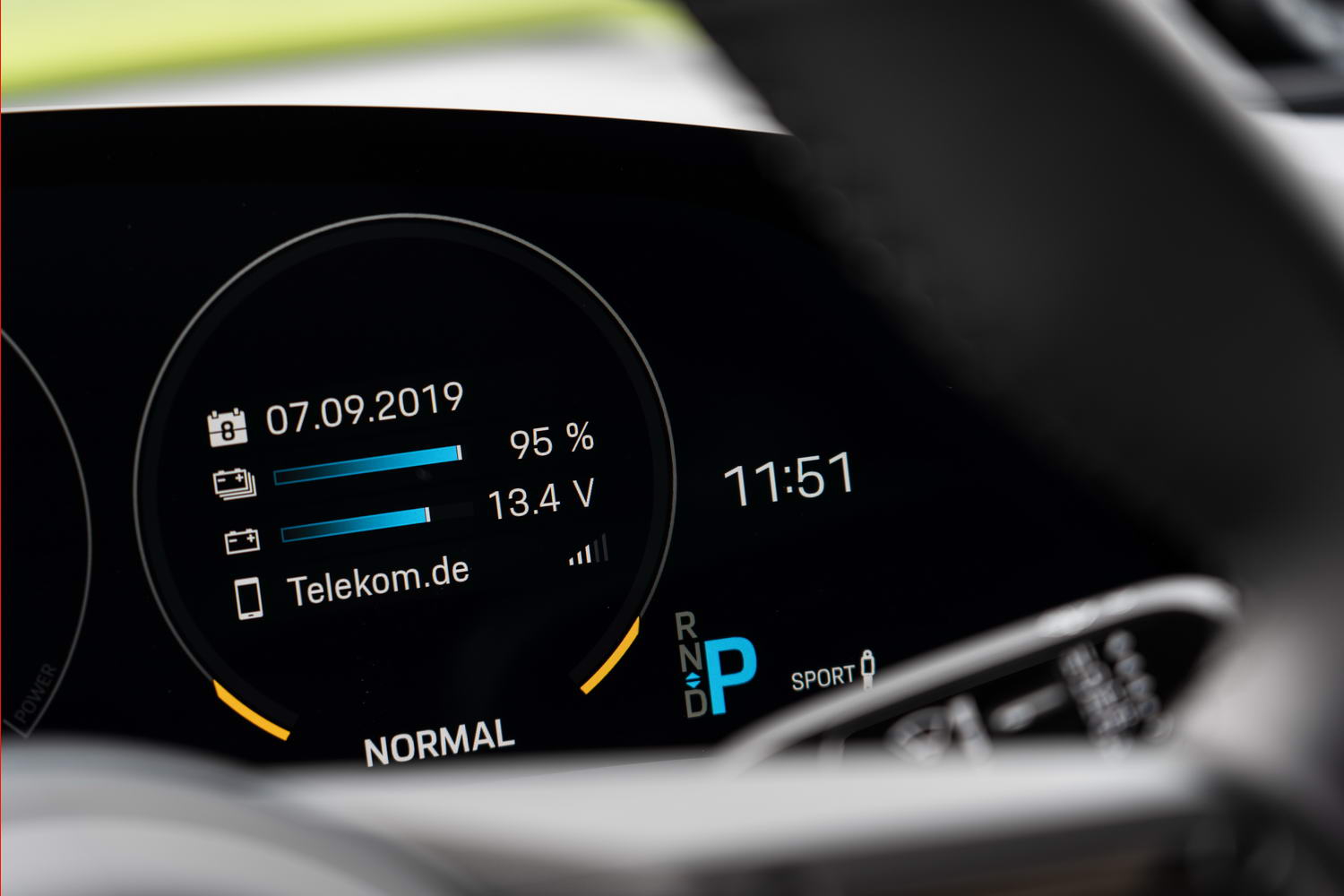 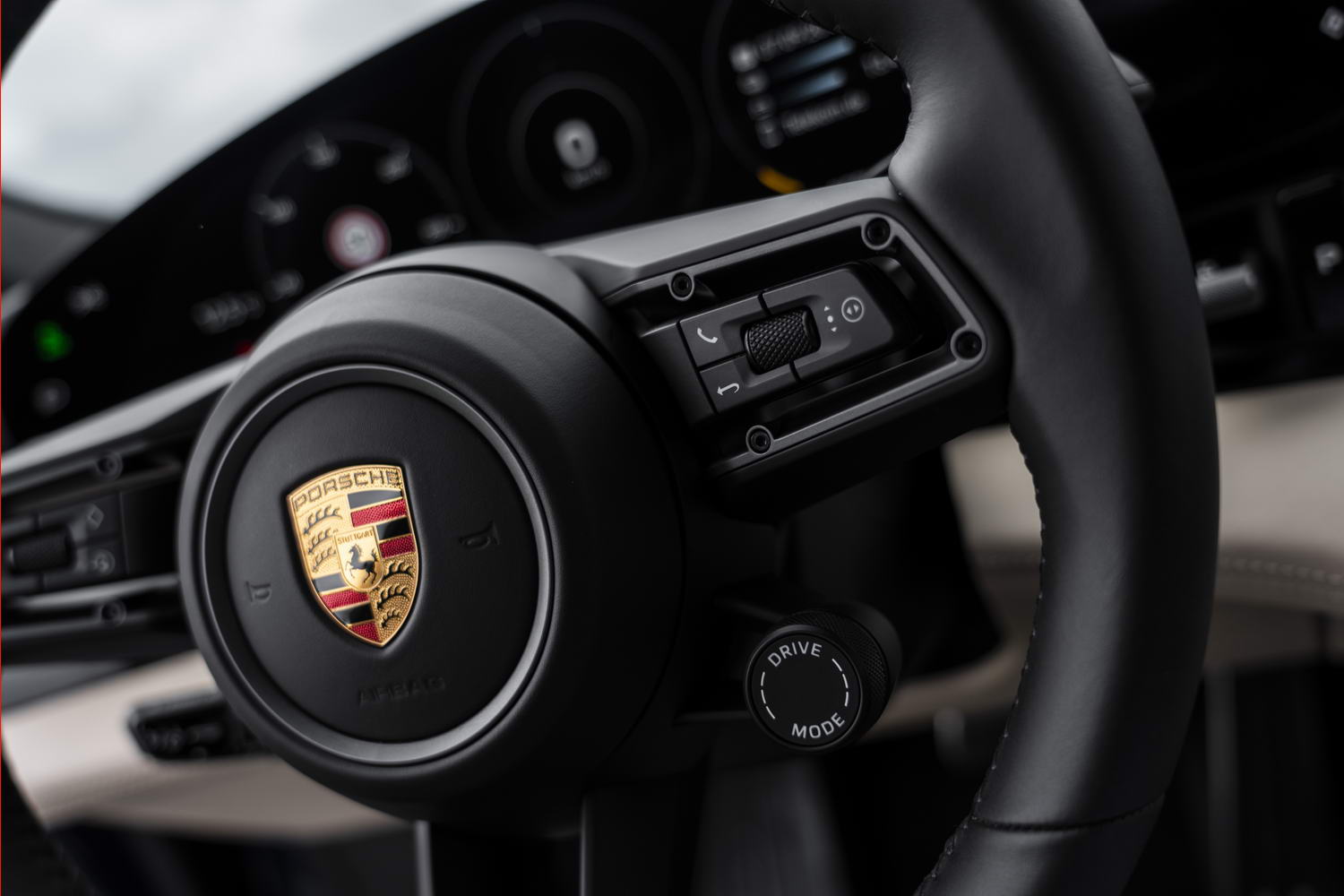 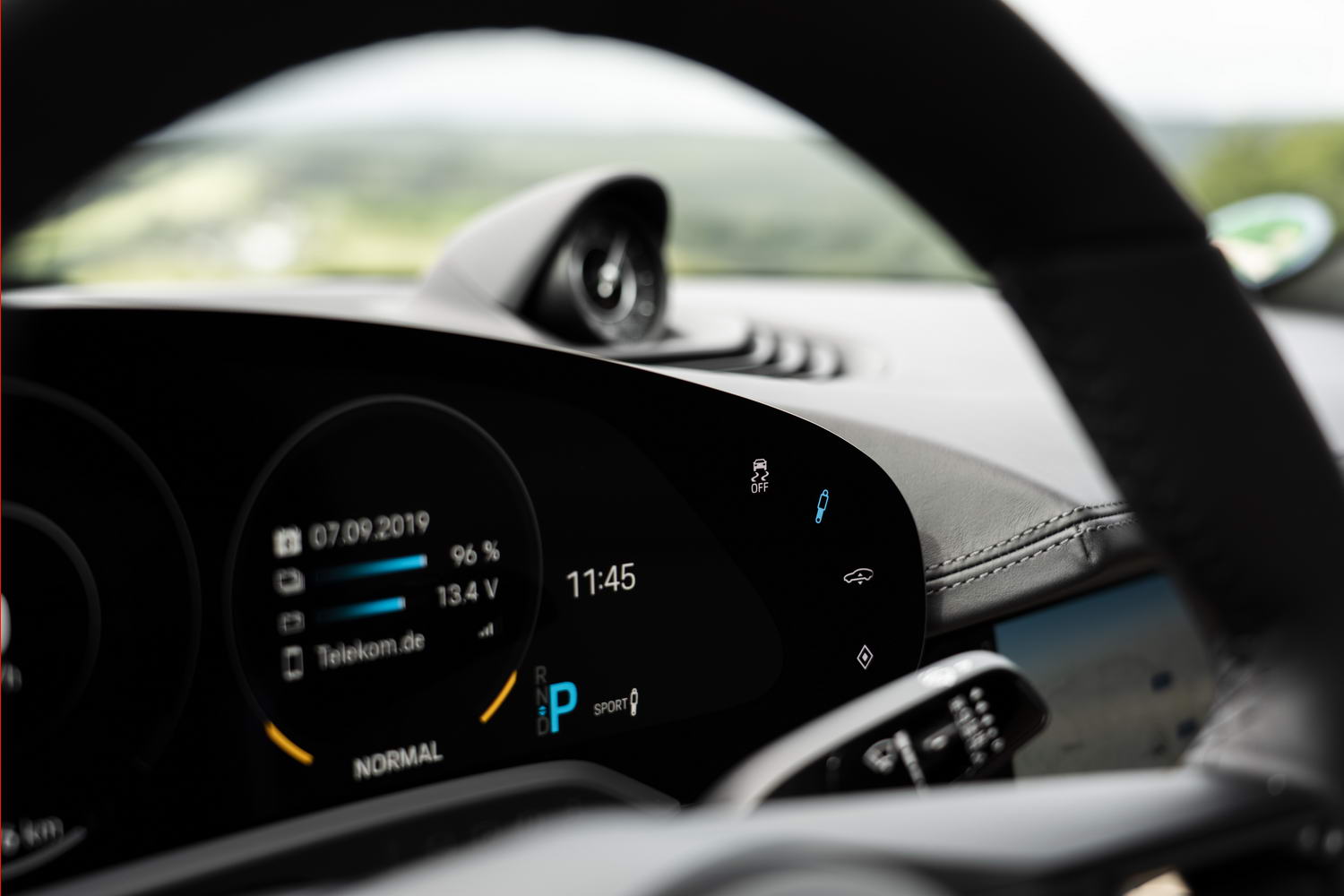 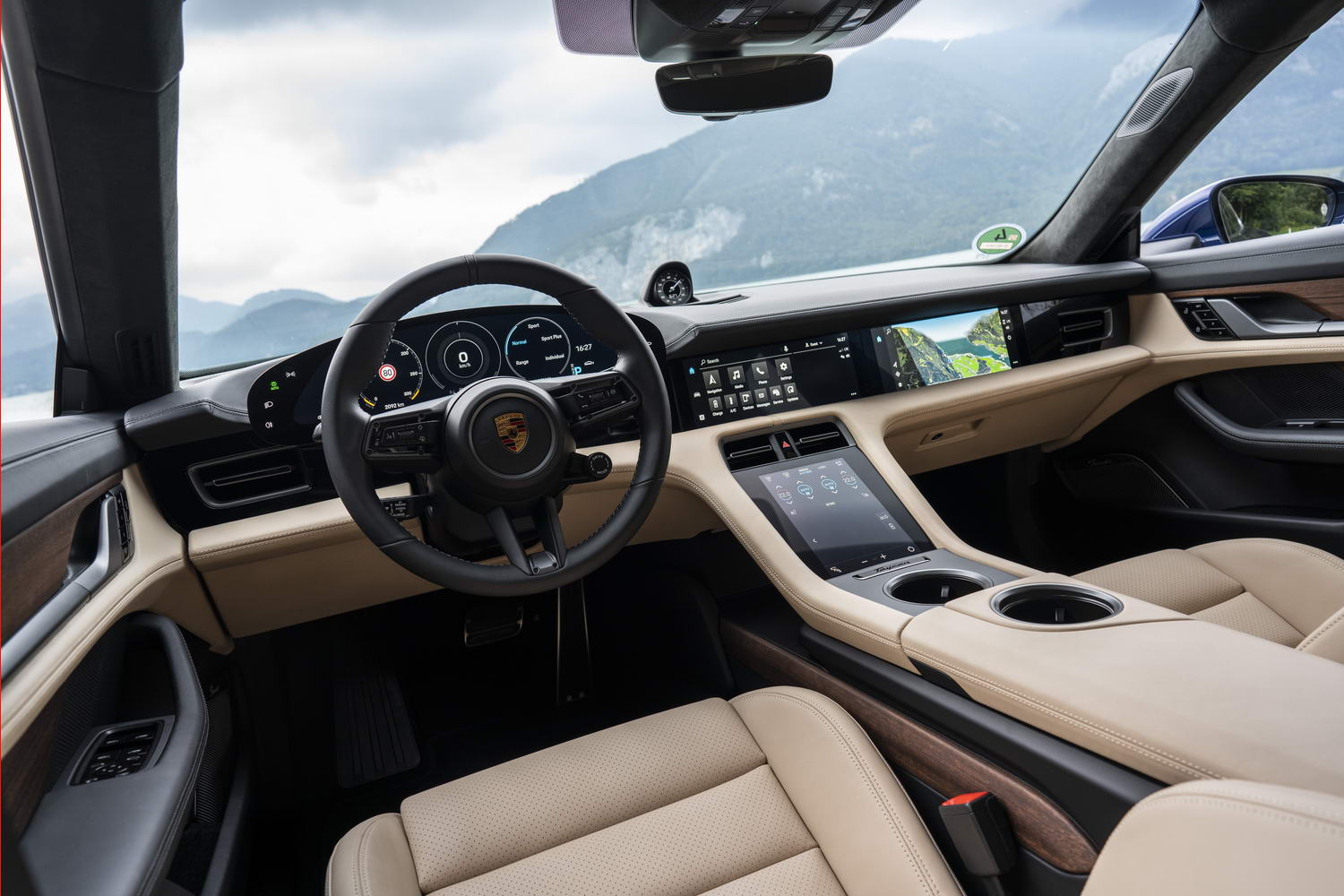 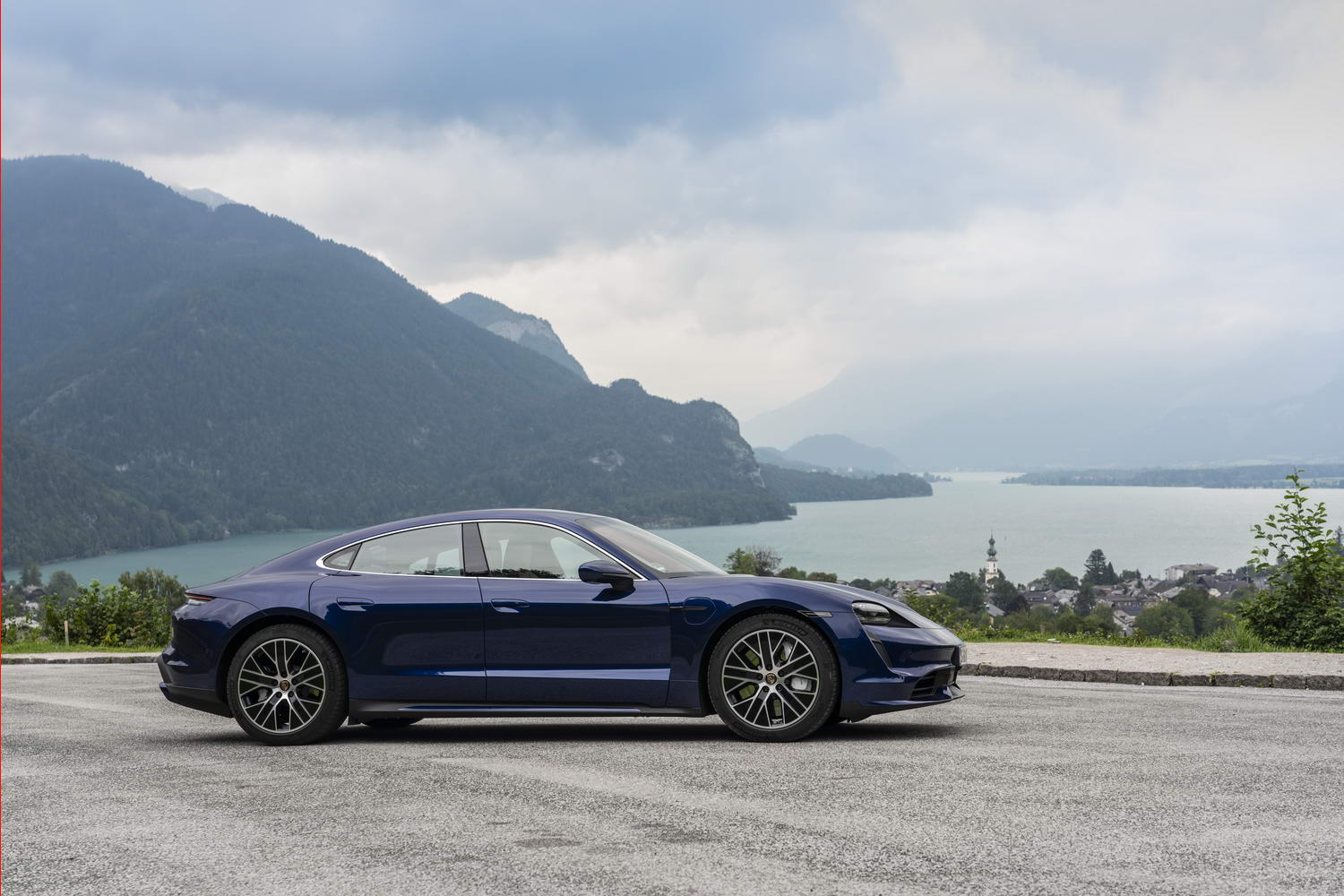 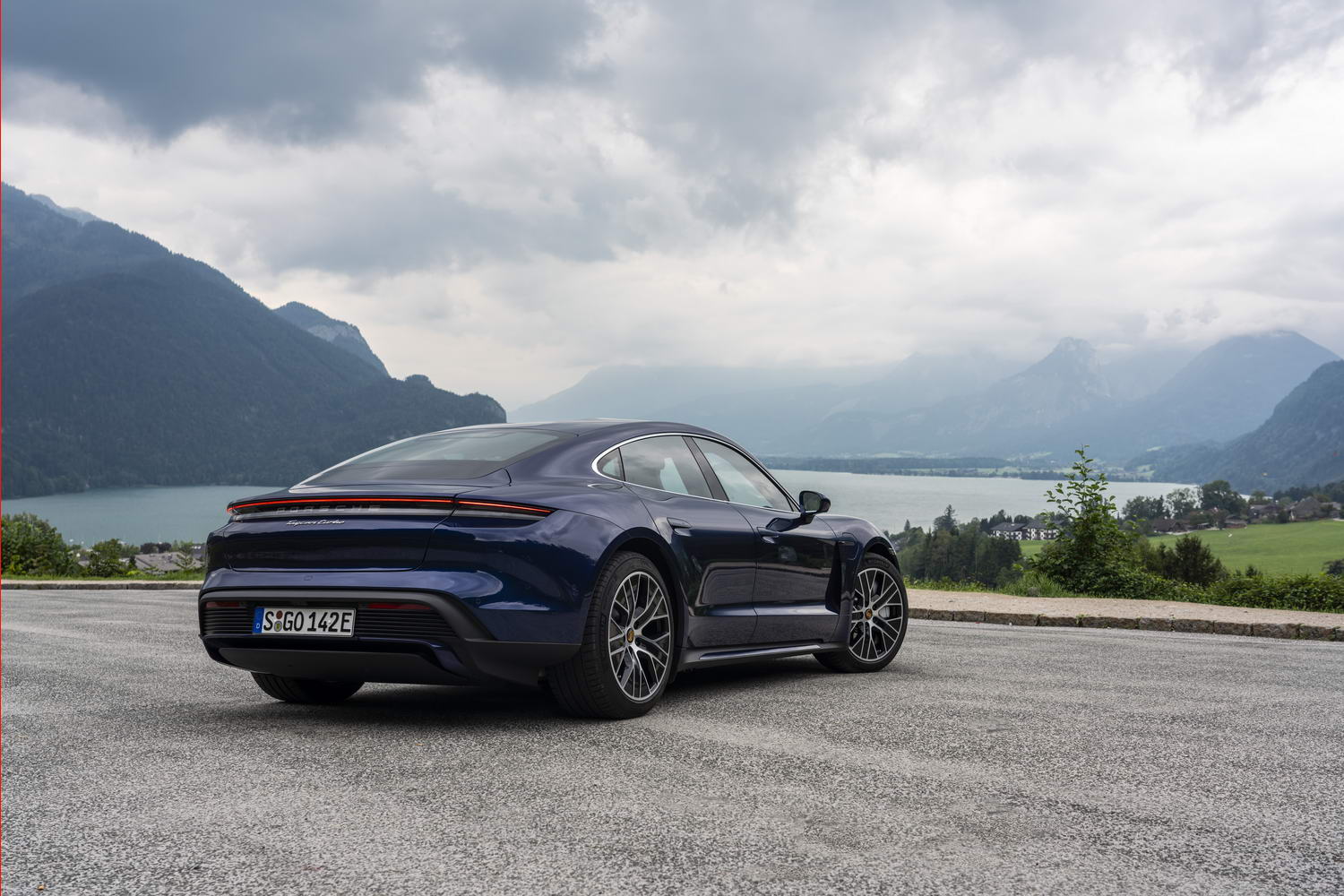 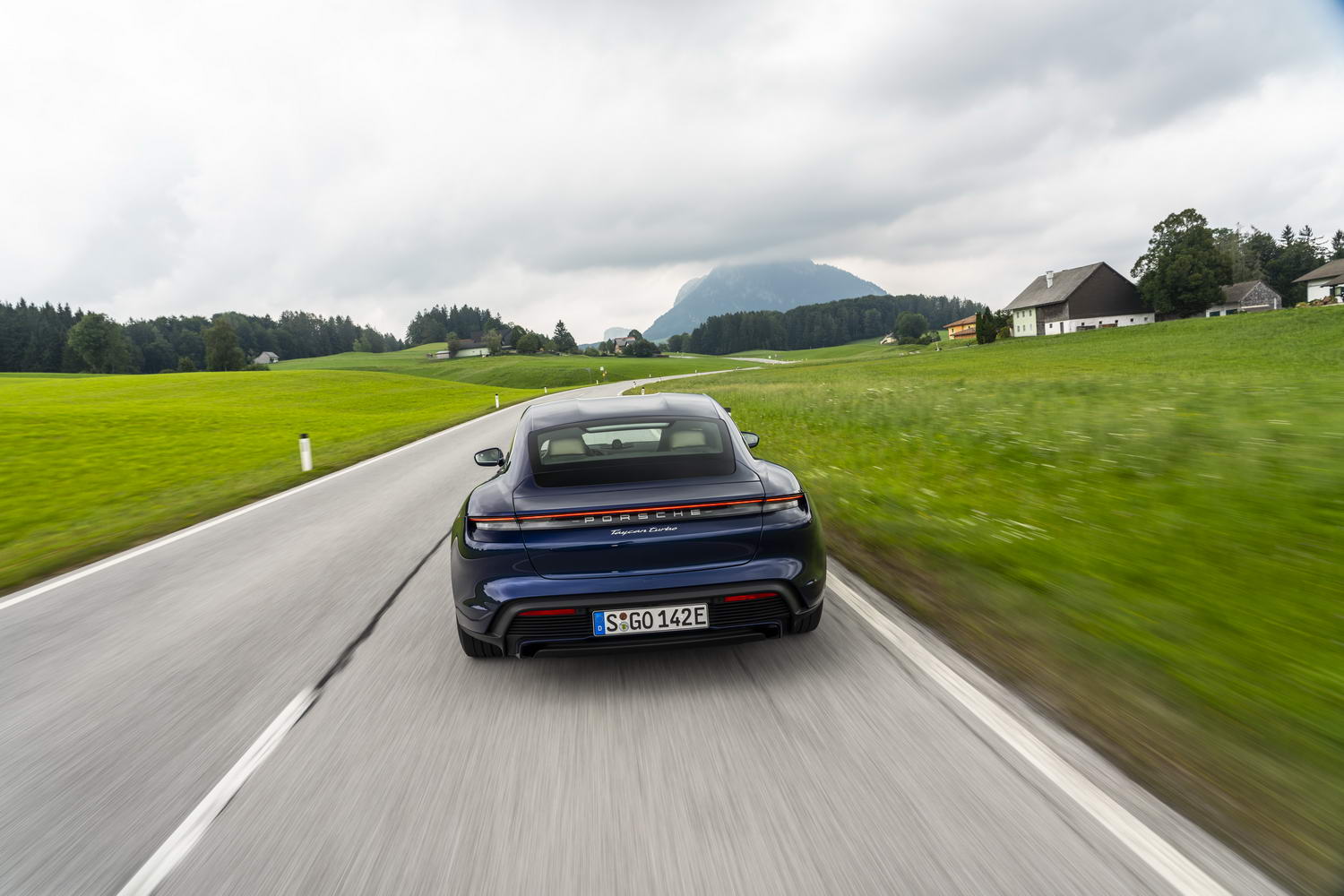 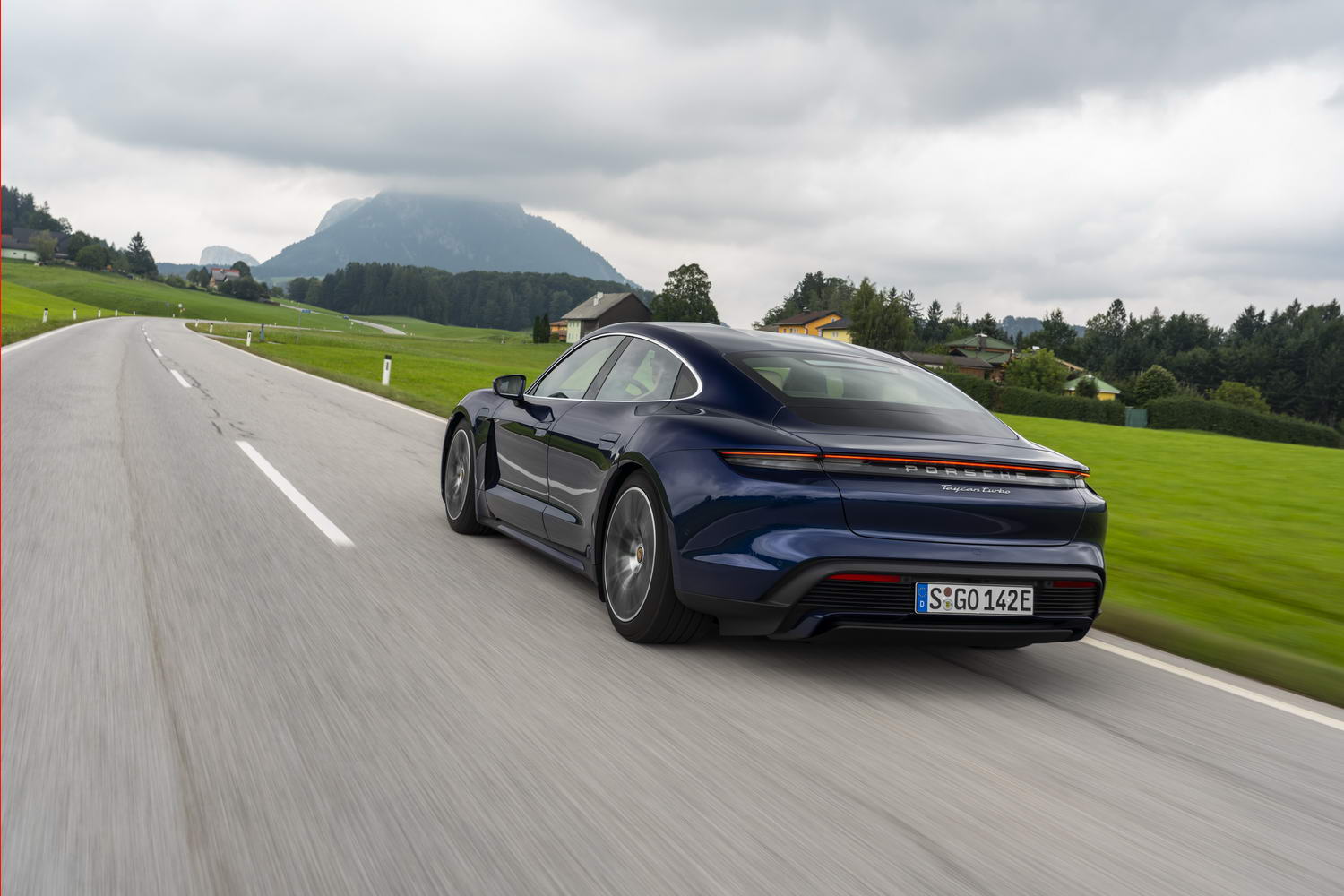 Porsche enters the electric vehicle (EV) market for the first-ever time with its Taycan sports saloon. Predictably makes a right proper job of it. All other EVs need not apply. The end.

Somehow, Porsche has got the styling of the Taycan just right, managing to tie it in thematically with other Porsche products and yet also achieving the aim of making it appear like the standalone product in the German company's portfolio that it undoubtedly is. Maybe it's those sleeker, squared-off headlights, maybe it's the lack of a radiator grille, maybe it's the smoother finishing to every panel, but this car conveys both 'Porsche-ness' and 'eco-credentials' with equal aplomb and an effortless confidence. It looks magnificent in a subdued colour and sitting on big 20-inch alloy wheels, so on kerb appeal it's already ahead of the pack, EV or otherwise.

And then you climb inside, into an interior replete with the usual stolid Porsche build integrity and yet enlivened with the specific touches that remind you that you're not just sitting in a Panamera. Like that majestic 16.8-inch Curved Display instrument cluster with no shielding cowl, which sits behind the perfectly round, perfectly sized, Alcantara-rimmed steering wheel. Or the climate-control touchpad down on what would otherwise be known as the transmission tunnel, which allows adjustment of the motors deep in the minimalist air vents. Or the lovely big Porsche Communication Management (PCM) touchscreen, with its super-crisp graphics.

Not only is the Taycan's cabin pleasing on the eye and technologically advanced, it's pretty capacious too. Headroom in the second row will be slightly limited for those taller than six foot, but there's plenty of legroom even behind larger drivers and the ambience is good in the back - it's not dark and constricted in there. Factor in two decent storage areas under bonnet and boot lid, and what you have here is a perfectly practical EV with a top-notch passenger compartment. Before you've so much as turned a wheel in the Taycan, it's already looking like an extraordinarily strong package indeed.

There are three Taycan models to choose from at the moment, although single-motor, rear-wheel-drive versions that are more 'affordable' might be forthcoming. The range king is the Taycan 4S, which'll apparently go up to 462km on a single charge. At the other end of the scale, the 761hp-peak Taycan Turbo S will run 0-100km/h in 2.8 seconds and has much of the equipment that is an option on the Turbo model (tested here) fitted as standard.

However, having driven the Turbo, which blends some of the insane power of the Turbo S with a 453km peak range, we're inclined to wonder why you'd ever need anything more from an EV. This thing performs every last kinematic task with unwavering brilliance. It's a surprisingly exceptional city car. It's a supreme cruiser. It's preposterously fast in a straight line. And it takes corners apart like a true Porsche product, despite the fact it tips the scales at a portly 2,305kg. In every respect that you could conceivably consider, the Taycan Turbo is a masterpiece of engineering.

Its show-stopping display begins as you roll out of town, revelling in the comfortable low-speed ride and that easy urgency that all EVs have on part-throttle openings, and marvelling at the lightness of touch of all its controls. At urban velocity, you're not aware of this thing's mass in the slightest. But, once you're out onto open roads or even the motorway, you'll be mesmerised by the ethereal refinement of the Porsche. That there's no combustion engine introducing vibrations into the Taycan's passenger compartment is a given, but even by EV standards the Turbo is almost preternaturally smooth and quiet when it's doing a steady 100km/h plus; some of this will be down to the optional noise-reducing glass fitted to our car, but much of it is the inherent build excellence that Porsche has developed into the Taycan. And, thanks to standard adaptive air suspension and Porsche Active Suspension Management (PASM) variable damping, it's really no exaggeration to say the Turbo's ride quality is limo-like. Or, going even further, better than pretty much anything we can think of this side of a Rolls-Royce Phantom. It really is that good.

That ought to be reason enough alone to want to drive the Taycan Turbo for every last one of its 453 kilometres of range, but then the Porsche goes and rubber-stamps the order form for you by utterly amazing you with its speed and handling. The former of these shouldn't be a huge surprise, given we're all well aware now of how the instant-torque delivery of an EV makes for fast acceleration and the Turbo has 850 Newton metres of the stuff to play with, but even so, the first time you ask for full roll-on acceleration the end results are quite startling. There's no hesitation from the twin gearboxes, there's all the traction in the world from the PTM all-wheel drive and the electric motors just hurl 2.3 tonnes of prime Porker off up the road with shockingly violent force. And the Taycan Turbo can do this again. And again. And again. With seemingly no let-up in the insistence of the acceleration.

Couple that sort of insta-power with a marvellous chassis and you get a genuine sports saloon, no matter that it's lacking for an engine. The body control is first rate, with no tangible lean, pitch or dive evident during fast cornering. Grip is immense and, with optional rear-axle steering, it feels agile and nimble in a way something this heavy has no real right to. Yet the Taycan Turbo is not some boring, steadfast all-wheel-drive missile - there's a real feeling of chassis adjustability and rear-axle playfulness to the way it corners, which is in part is due to the standard fitment of Porsche Torque Vectoring Plus (PTV Plus). It's just majestic to drive in a wide variety of situations, this Porsche, and when you're enjoying its talents along a deserted back road then you completely forget that you're in an EV.

This last fact is partly because of the optional Porsche Electric Sport Sound (PESS). If you're lucky enough to be buying a Taycan, tick this box. Really. Tick it. The genius of this is that Porsche knows that noise is an integral part of the marque experience - think of great performance Porsches of the past and you'll invariably think of some high-pitched, metallic flat-six yowl ripping into the air. Now, obviously, the Taycan can't make those sorts of tunes, so Porsche decided to use a synthetic augmentation. But fear not, it hasn't decided to make the Turbo disingenuously sound like any combustion-engined car - instead, it has only amplified the Taycan's electric motors whirring away. And the resulting noise with the Turbo in Sport Plus mode is unlike anything you'll have heard from a fast car before... in an entirely fantastic way. The Taycan has its own sound, the rich, thick and alluring sound of an electric sports vehicle doing its best, and it's a key part of what makes driving the Porsche like it's a Porsche so enjoyable.

Although the Porsche Taycan is well into six figures when specified as a Turbo like this, a generous standard specification includes active driver-assist safety features such as Lane Keeping Assist, Traffic Sign Recognition, Collision and Brake Assist, Multi-Collision Brake, and cruise control with a speed limiter, as well as other toys like front and rear ParkAssist, keyless go, leather upholstery, a leather multifunction steering wheel, a Bose 14-speaker surround sound system with 710 watts of power, four USB-C ports dotted around the cabin, a powered tailgate, integrated Porsche 4D Chassis Control, LED Matrix headlights with Porsche Dynamic Light System Plus (PDLS Plus), auto lights and wipers, dual-zone climate control, 18-way electrically adjustable adaptive sports seats in the front with a memory package, heated seats front and rear (our test car was a four-seat model but a five-seat configuration is available) and eight airbags. True, there's the potential to push the Turbo's price well towards €200,000 with Porsche's lengthy options list, but when you think about precisely what sort of a multitalented vehicle you're getting in the form of the Taycan, its list price doesn't seem anything extraordinary at all. 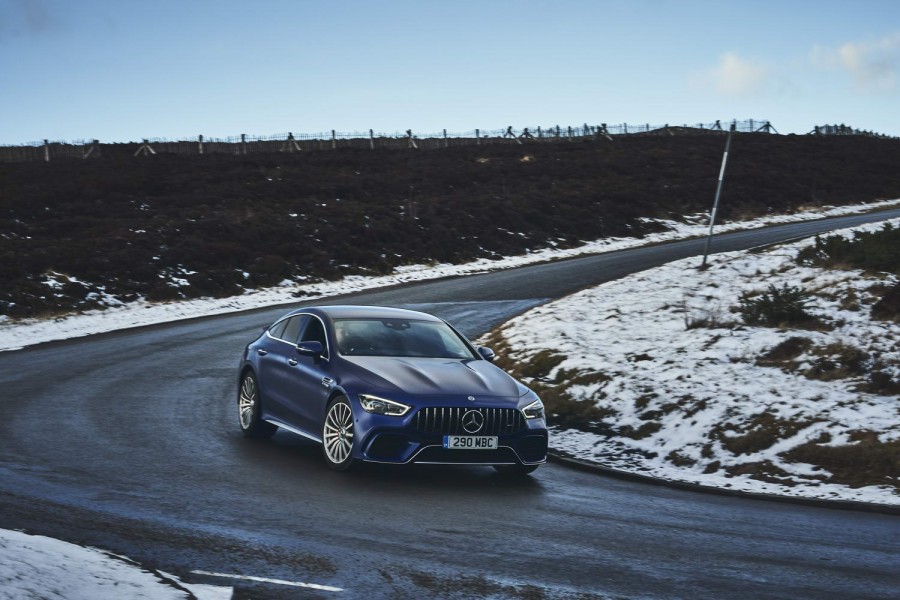 Mercedes-AMG GT 63 S four-door (2019) review
Mercedes-AMG GT 63 S 4-door vs. Porsche Taycan Turbo (2020): you could go for old fashioned blood-and-thunder for about the same performance stats from this V8-powered German. More of a rival for the Panamera than the Taycan but the AMG 4-door is a quality item. 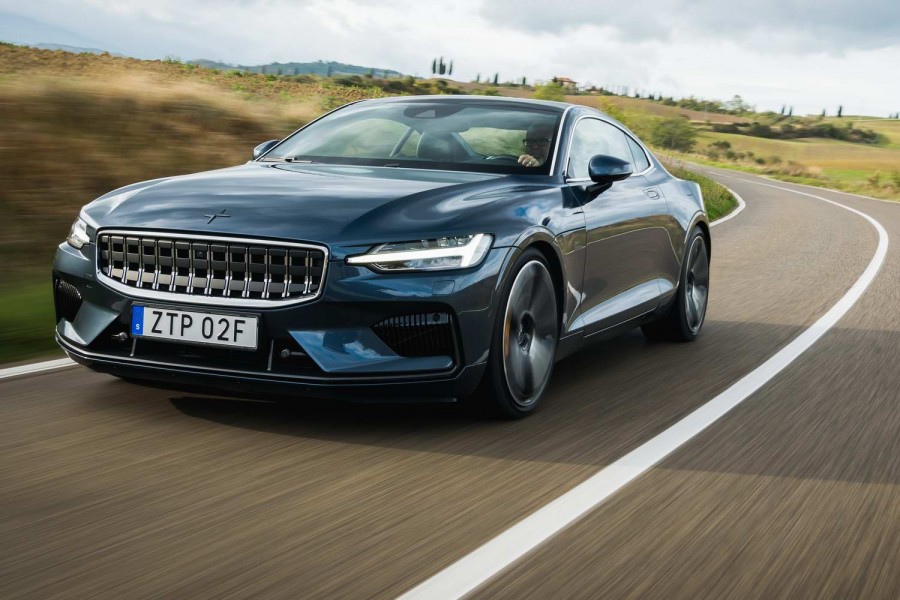 Polestar 1 (2020) review
Polestar 1 vs. Porsche Taycan Turbo (2020): significantly less practical and not fully electric like the Taycan, but the gorgeous Polestar 1 has an appeal all of its very own. Handles brilliantly, if not quite Taycan brilliantly.

Tesla Model S 100D Long Range (2019) review
Tesla Model S vs. Porsche Taycan Turbo (2020): the EV that shook up the automotive world continues to inspire a devoted fanbase, but in terms of build quality, handling, repetition of performance and looks, the Taycan has the Tesla covered. The Model S has more range, though.