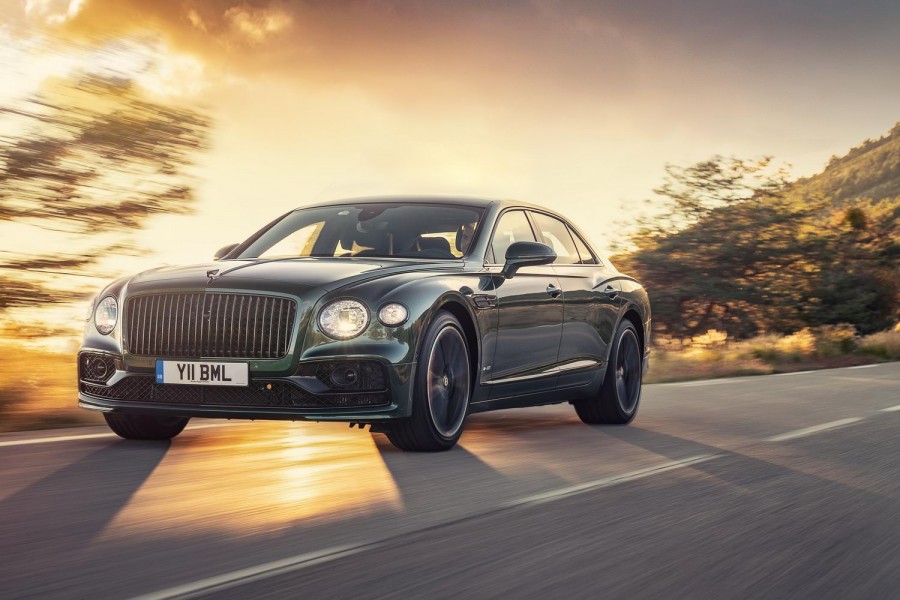 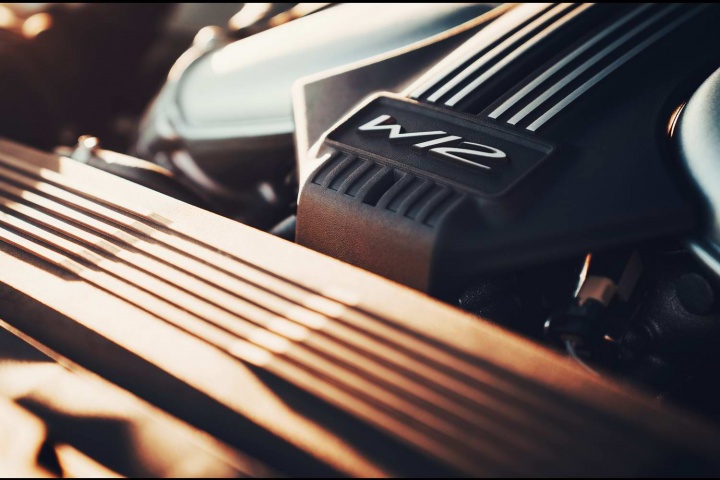 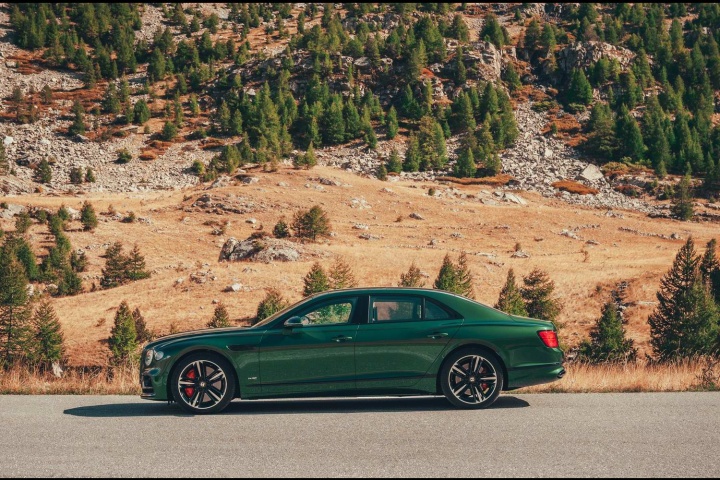 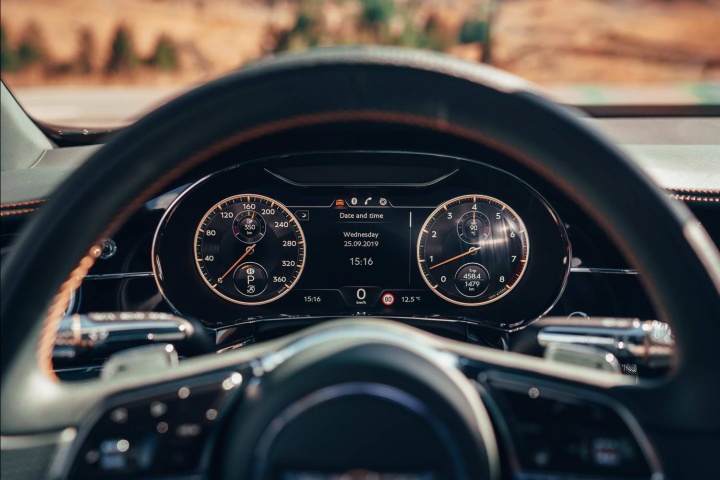 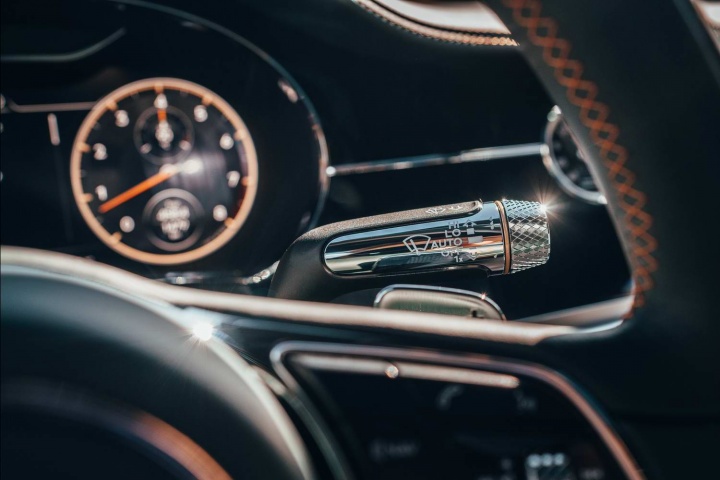 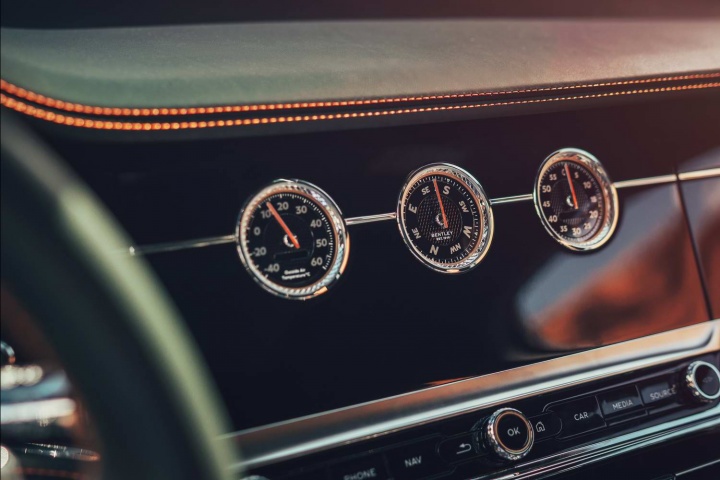 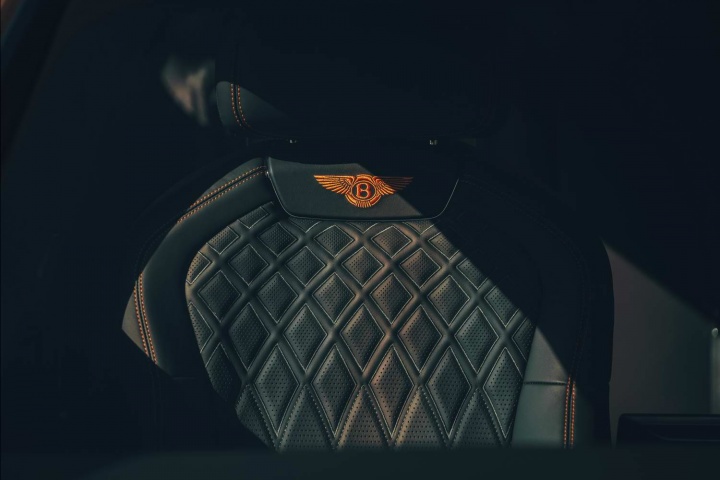 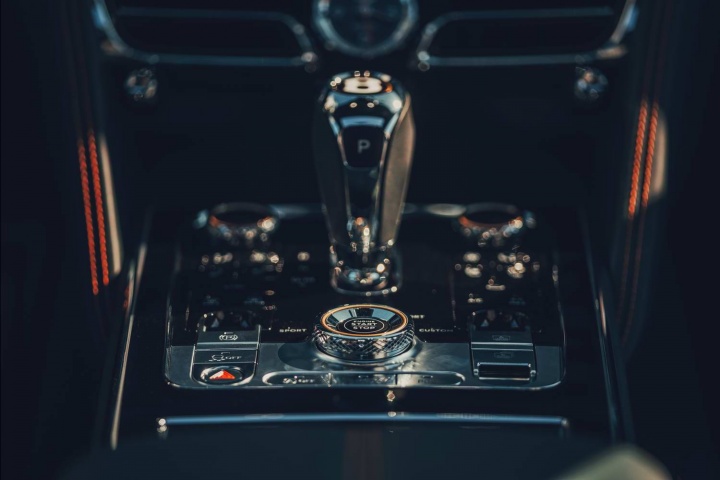 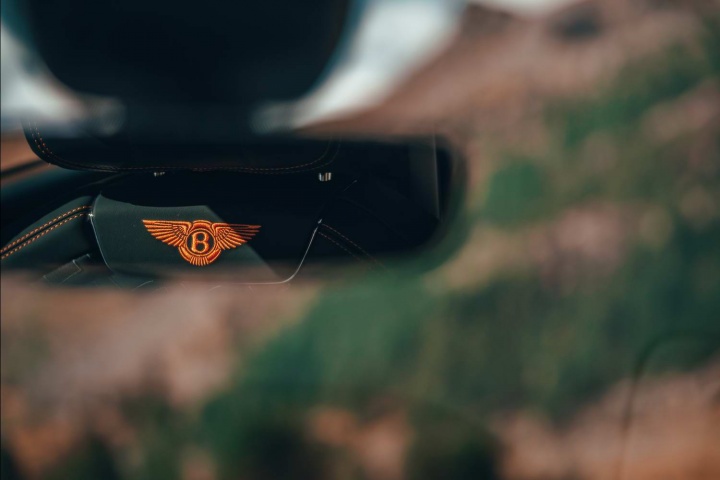 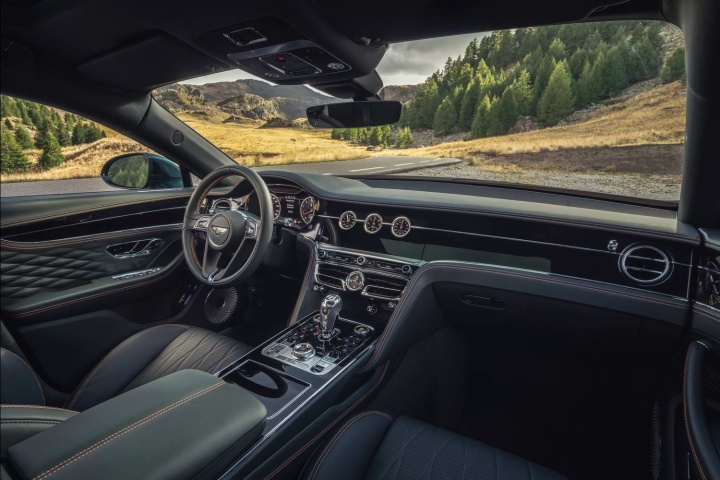 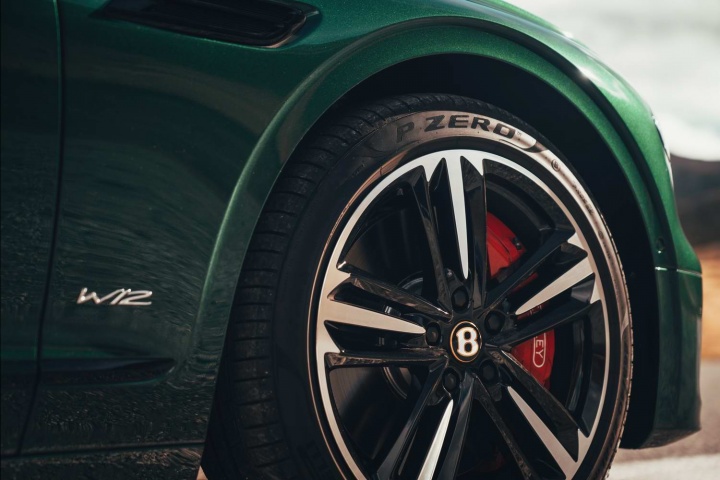 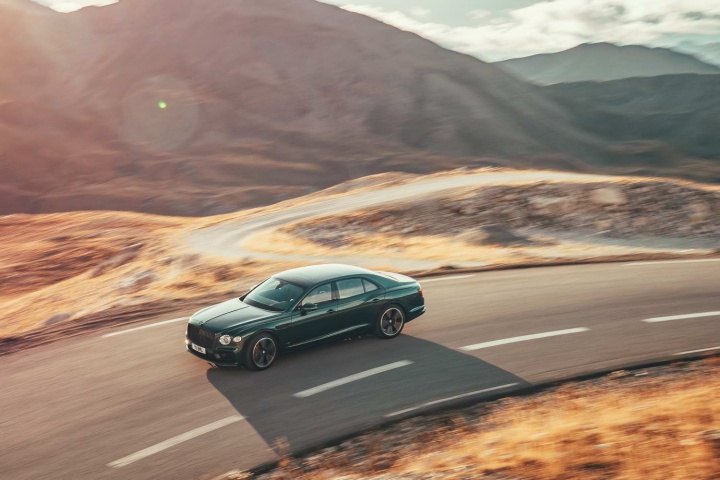 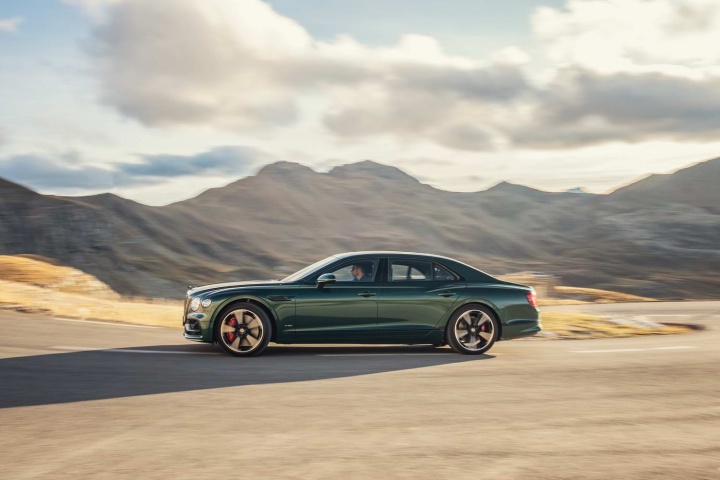 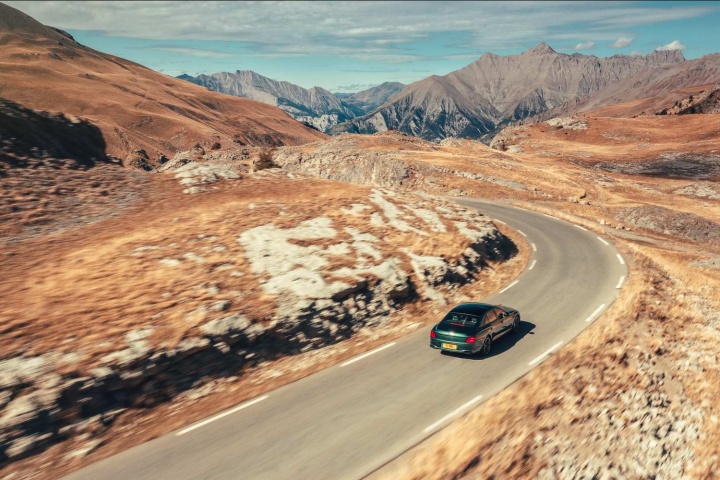 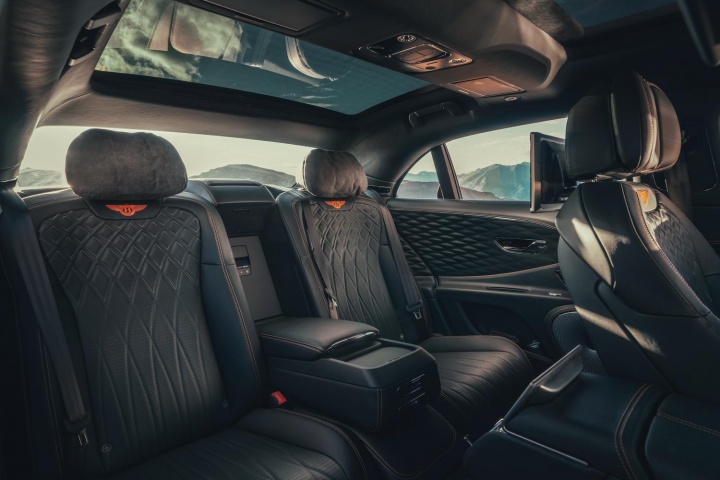 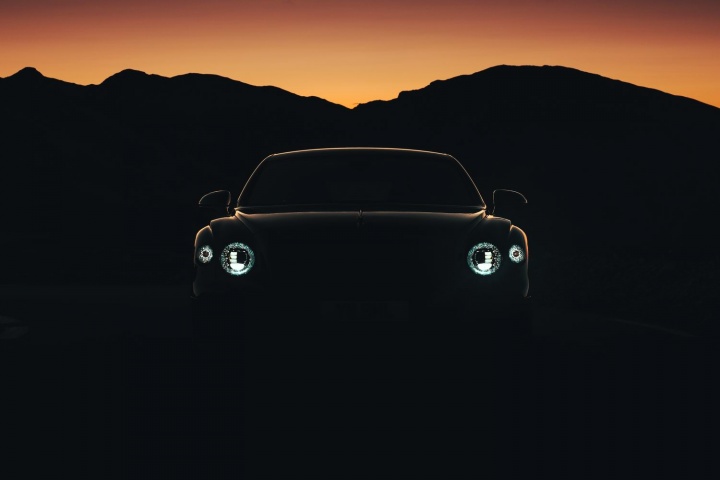 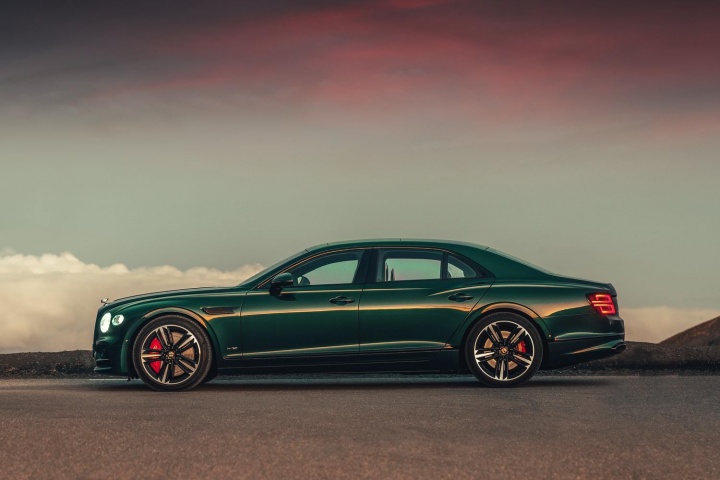 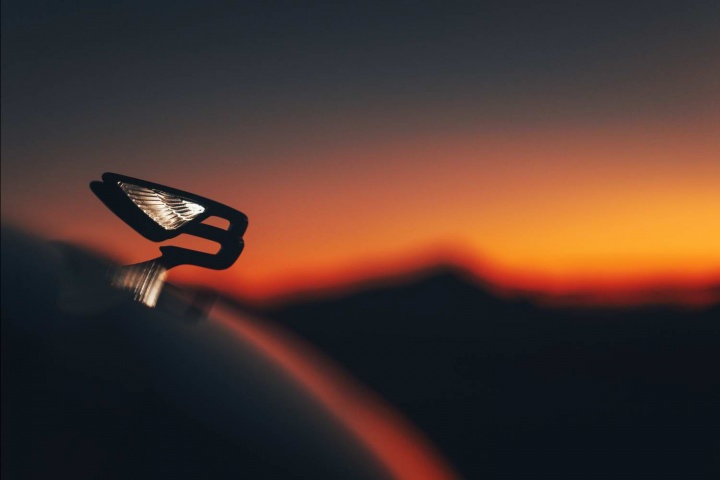 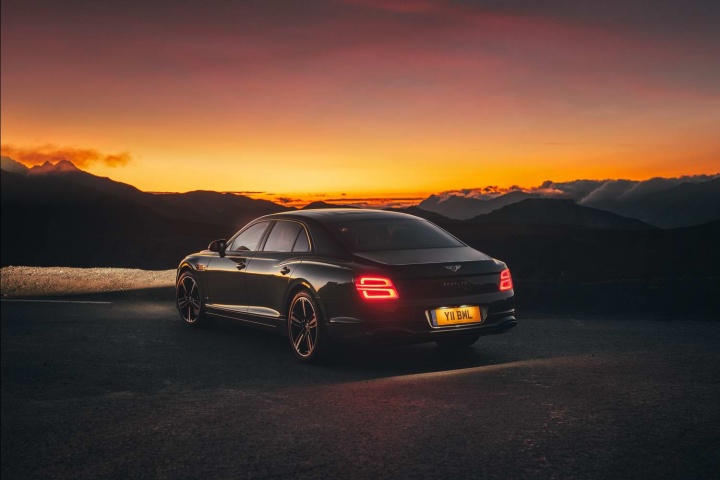 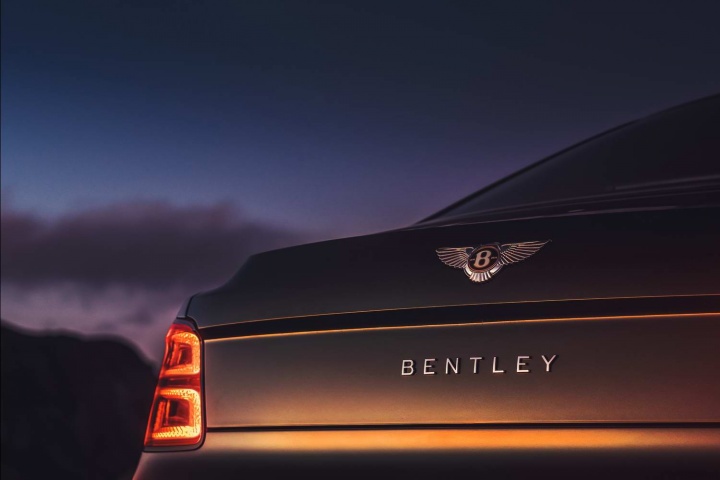 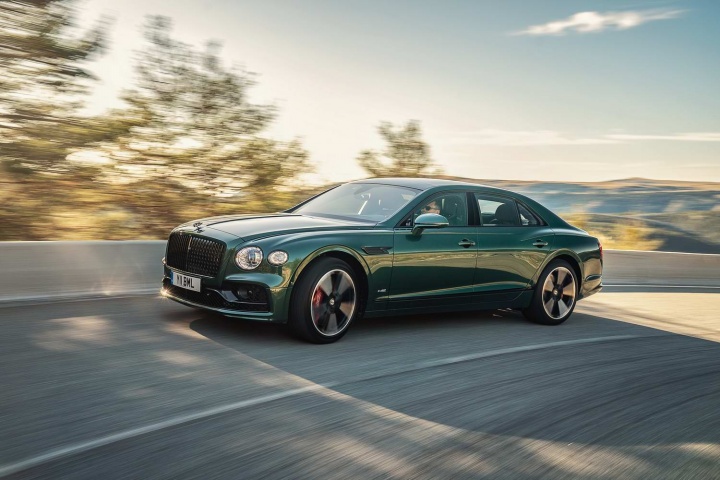 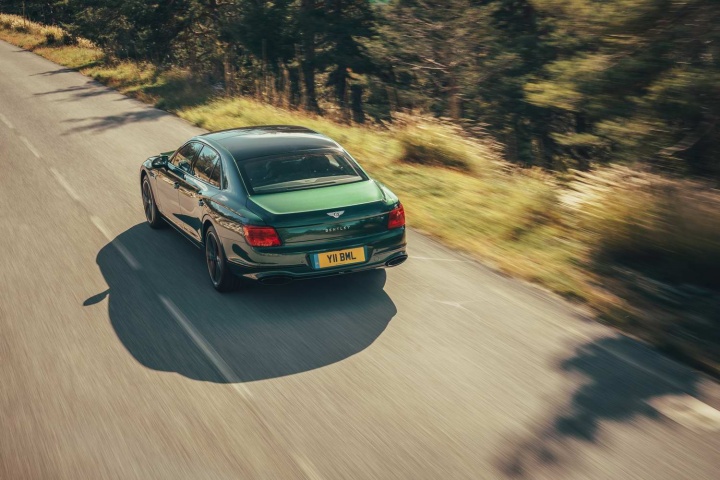 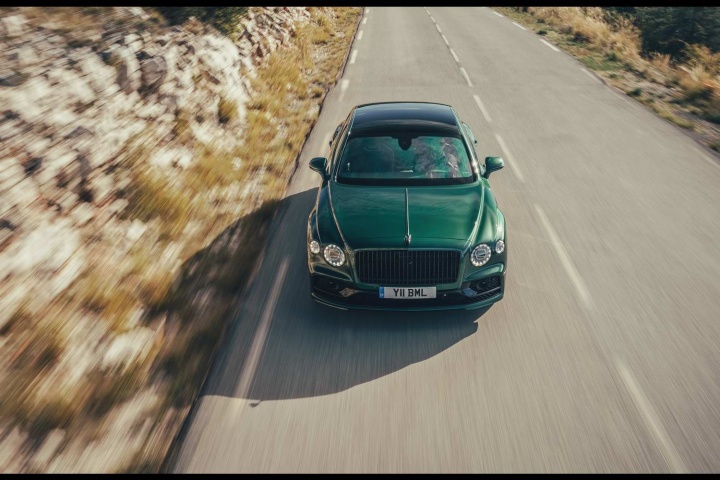 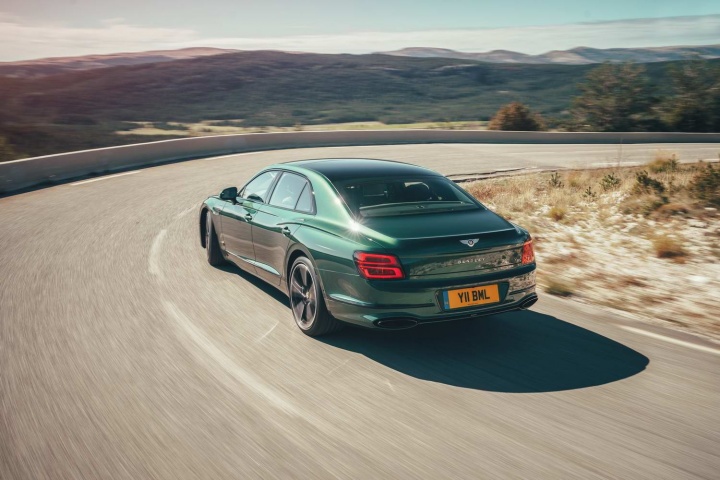 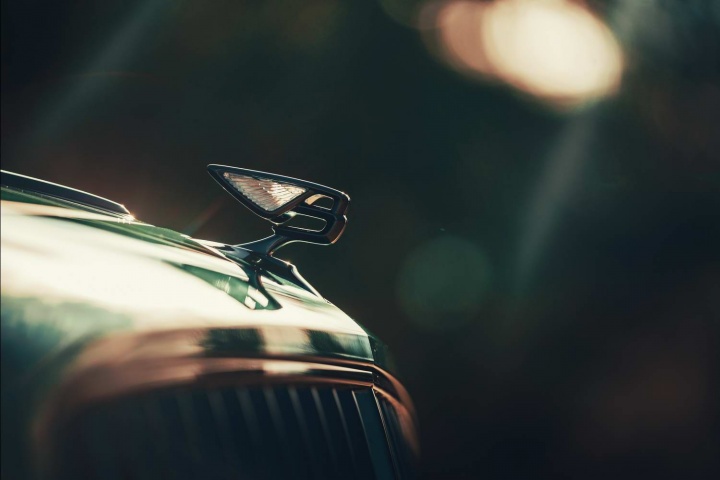 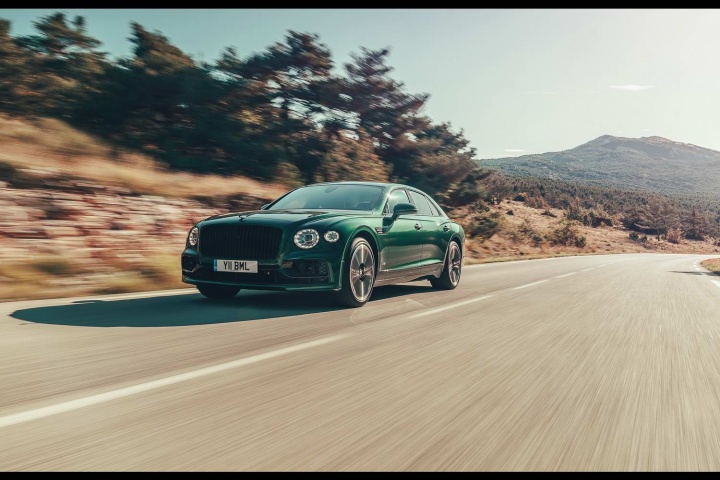 It's clear the new Bentley Flying Spur is in with a title shot for 'Best Car in the World.'

What should the 'Best Car in the World' be capable of? It'd be quick. It'd be handsome. It'd have a corking interior. It would be as good at being comfortable at low speeds as it is thrilling its driver at higher ones on twisting roads. It would be practical. And it would be affordable. Considering all these factors, then - save for the money issue - the new Bentley Flying Spur seems to have every base considerably well-covered. It is a quite remarkably brilliant machine.

Before we get onto the current model, a very quick potted history of the Flying Spur name. It was used for the first time on the 1950s Bentley Continental saloon, and it comes from British heraldry as the boss of the Mulliner coachbuilding division (which was tasked with making the first Flying Spur) at the time was a Scotsman called Harold Johnston; the Flying Spur was his clan's traditional emblem. The name continued to be used into the 1960s, but then disappeared, before reappearing decades later in the Volkswagen-ownership era on the 'first' modern Flying Spur in 2005. That Mk1 was known as the Continental Flying Spur, as it was a four-door version of the then-new Coupe GT, and while it was an understandably top-end machine, it wasn't the most graceful-looking thing.

By the Mk2 Flying Spur of 2013, Bentley had dropped the 'Continental' bit to try and send the Spur in a different direction to its two-door relation. The second-gen Flying Spur was a much more handsome car than the Mk1 and an excellent luxury saloon, but in one or two areas it quickly started to show its age - such as in the obvious VW switchgear in the cabin, with its old VW navigation and infotainment software, and in its general design language (still being based, ostensibly, on the 2003-launched Continental GT).

However, the Continental GT and GTC models have undergone a renaissance in their third outings, becoming truly sporting GTs for the first time in their recent history. So now it's time for the third Flying Spur, which shares much with the Conti GT, but which is still viewed as a disparate model in its own right, to take up the challenge of operating at the same sort of level as its more rakish relations.

We mention all this because we think this is the point where the modern Flying Spur has come of age - and maybe even surpassed its Continental cousins in the desirability stakes. For starters, just look at it. Easily the most gorgeous Flying Spur since 2005, it even wears the ultra-modern Bentley styling better than anything else in the marque's stable right now. There's an elegant proportionality about its huge frame, with those sculpted haunches, smoothed-off rear and the big, vertical-vane front radiator grille all being particular highlights. There is not an angle from which the Flying Spur looks anything other than magnificent, while you can spec it in any colour and option pack you like and it'll remain aesthetically tremendous. Kudos also for the retractable 'Flying B' structure at the front of the car, this being the first time such a thing has featured on a Spur.

If the outside is marvellous, the interior is peerless. Nothing this side of a Rolls Phantom will eclipse the Bentley's sumptuous appointments. Better still, the Flying Spur has the Conti's dashboard fascia, which means no column stalks from an Audi A3, as you'd find in the Bentayga, and also the possibility to have the wonderful theatre of the Bentley Rotating Display, that superb prism of dashboard that can swivel about to show one of three faces: either the wood trim; or a set of classy analogue dials; or the crystal-clear, thoroughly up-to-date infotainment screen.

However, where the Flying Spur aces it is in rear accommodation. As much as they try, the GT and GTC models remain staunch 2+2s, so it's up to the Spur to satisfy Bentley customers who regularly transport around up to five adults (the saloon can have three seats across the back, if you so wish). Yet not only is it as exquisite sitting in the back as it is up front, meaning no posh person is likely to be desperately shouting 'SHOTGUN!' as they walk out to the Bentley, there's even another piece of engineering drama back there to delight all-comers. For the Bentley Rear-Seat Entertainment, the control panel at first presents itself as a fixed, flush-face touchscreen mounted at the back of the transmission tunnel. Press a small 'eject' button on the interface, though, and the whole thing glides forward soundlessly, allowing you to pluck it away from its magnetised mountings and use it as a portable control tablet for all manner of functions on the car (including raising and lowering the Flying B at the Spur's nose, which provides plenty of childish amusement). It is quite extraordinary luxury and it is the first time such a technology has been seen on a Bentley. Throw in a 420-litre boot at the back of the car and the Flying Spur's first tasks - of wowing you with its appearance, its interior quality and its practicality - are all smashed right out of the park.

And then you drive it. Goodness, this is some car. Some quite astonishing car. At 2,437kg and 5,316mm tip to tail (with 3,194mm of that taken up by wheelbase), it is obviously no featherweight sportster. But for something this gigantic and grand and luxurious and plush to be as agile, as rewarding and as balanced as it comes across is nothing short of extraordinary.

With a 48-volt electrical system powering active anti-roll bars, the four-wheel-steering system and Continuous Damping Control teamed to three-chamber air suspension, the all-wheel-drive Bentley will make mincemeat of roads that, at first glance, seem too tight and sinuous for its physical size. It enacts rapid direction changes with an uncannily flat level of body control, it resists understeer far more readily than any large building has a right to and, if you plant the throttle in Sport mode and a low gear, then it will even do something as unseemly as tweaking into oversteer, as its rear-biased all-wheel drive throws torque at the back of the car. Monster brakes, which only start to show fade after the sort of prolonged handling workout that owners will surely never subject their Spurs to, and Bentley's well-kept secret - which is 'excellent steering with feel, good weighting and faultless progression' - all add up to ensure that the Flying Spur quite epically fulfils the 'sports sedan' part of its dichotomous brief.

That the mighty biturbo W12 can punch ridiculously hard enough to match the chassis finesse is no surprise. This engine is a belter, with great reams of easily accessible torque across the board and a surprisingly vivid top end if you decide to spin it around the tacho. Might just have been us getting swept up in the whole 'Best Car In The World' vibe, but we also felt that this was the nicest the 12-cylinder 6.0-litre motor has ever sounded, too, with a discreet but insistent and rising growl permeating the sound-deadening-stuffed cabin as the rev counter passed 4,000rpm. Allied to one of the best and most unobtrusive eight-speed gearboxes in history, the performance of the Flying Spur W12 is nothing short of majestic.

But then so is its refinement. The ride quality, with the car in either mid-level 'Bentley' setting or the cloud-like Comfort mode, is flawless. That's right, we said flawless. On a set of colossal 22-inch wheels, the Spur simply hissed its way soundlessly over poor road surfaces and brought in a taut yet supple level of body control that makes travelling in it an unmitigated joy, no matter which seat you're sitting in. Given that it operates in near-silence and a silken smoothness that's eerie at more acceptable road speeds, it most emphatically deserves the cheeky 'four-door Grand Tourer' epithet that Bentley's PR team confers on it. There's pretty much nothing else we can think of that we'd rather do 1,000km straight in than the Bentley Flying Spur. And we'd do more than 1,000km straight in it, if necessary; that's how comfortable and relaxing it is to drive.

Is there anything we dislike about this car? Well, three things, but we really were searching feverishly hard for any of them. One, the integration of the front-view camera in the grille isn't the most discreet, but then it isn't on any car, truth be told. Two, the paddles on the steering column are too small - they're Audi-sized, although they are backed with a splendidly tactile material so they feel top-notch to the fingertips, and so it'd be nice if they were a bit more... bespoke to Bentley. And three, the whole thing could only be improved if it were turned into a Shooting Brake estate. Here's hoping...

At roughly €310,000 imported, this is obviously several parsecs removed from a car you could ever hope to call 'affordable'. So why such a high rating? Well, because that's about half the price of a Rolls-Royce Phantom and we think the Bentley stands genuine comparison to that oh-so-unique car - indeed, in terms of looks and chassis talent, the Spur is unquestionably ahead. That it's also cheaper than the Bentayga Speed, an incredibly fine vehicle, but one that we think is eclipsed by the Spur in, well, every department, is another feather in the cap of the Spur. It's a lottery-win kind of machine, indubitably, but if your numbers came up then it ought to be the very first four-wheel thing you looked at.

The Bentley Flying Spur is a truly exceptional machine in every regard. Turn it into an estate so that is has the full boot-space thing going on, and we'd have little doubt that it would have a rightful claim to be 'The Best Car in the World'. Even as a four-door saloon, this regal barge is perilously close to perfection as it is. It's one of the greatest all-round cars we've driven in many a year. 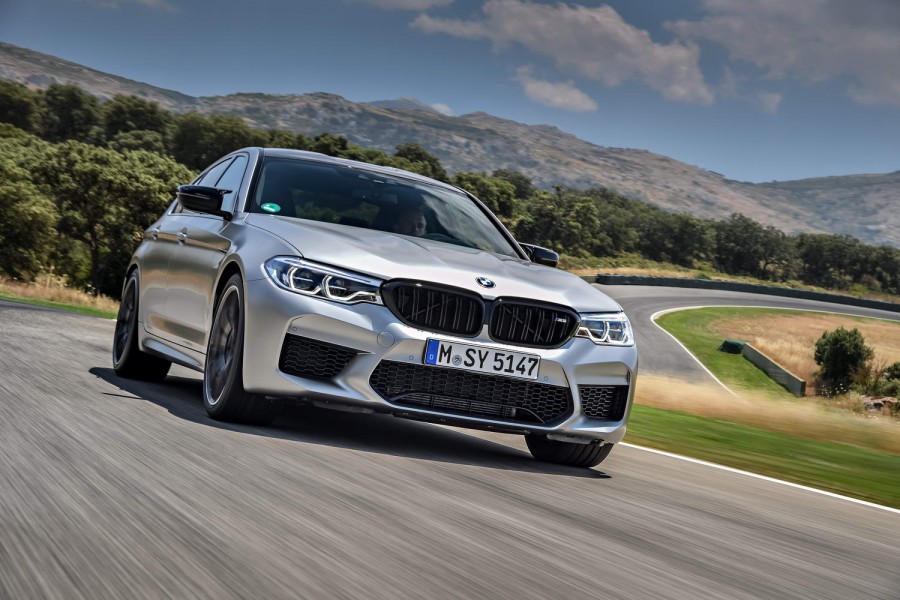 BMW M5 Competition review
BMW M5 Competition vs. Bentley Flying Spur W12 (2020): yep, we've gone there. This is a dyed-in-the-wool supersaloon from a marque a few rungs down from Bentley in the prestige stakes, but if you want a 600hp-odd four-door that does lots of things very well, the M5 Competition is worth a look. 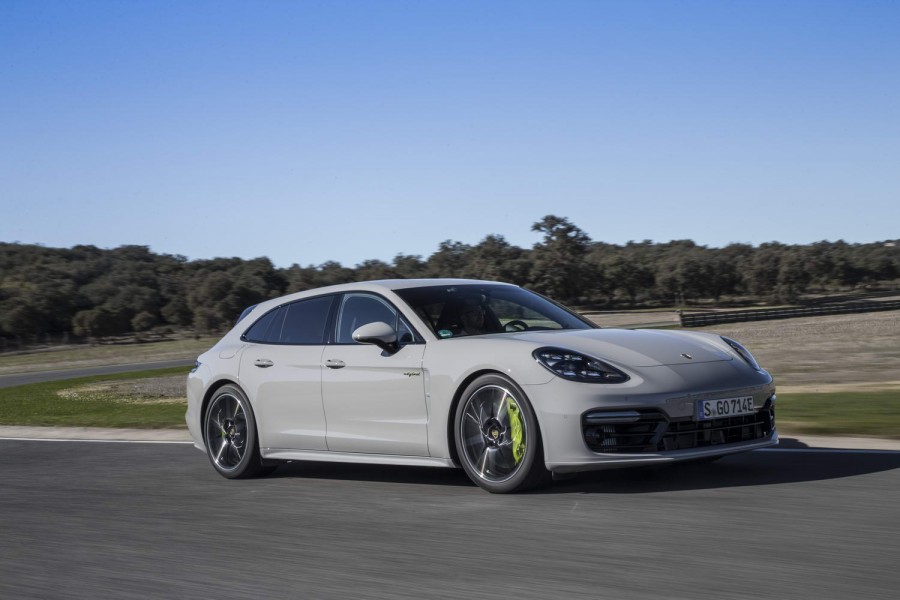 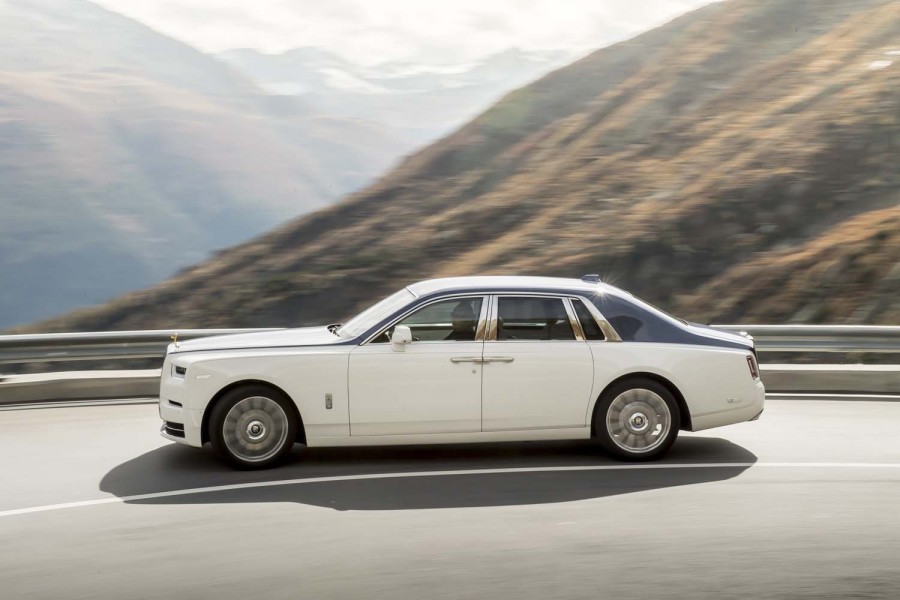 Rolls-Royce Phantom review
Rolls-Royce Phantom VIII vs. Bentley Flying Spur W12 (2020): unparalleled quality from the Rolls. It's difficult to say which has the best cabin out of this and the Bentley, because the Phantom has The Gallery while the Bentley sports that funky rotating display. Rolls is even more comfy to ride in but can't handle like the Spur.