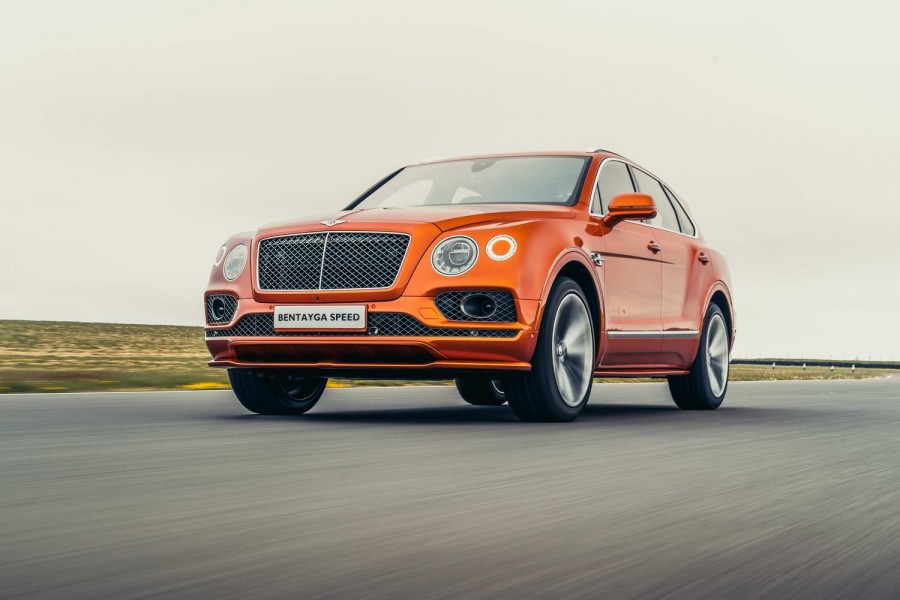 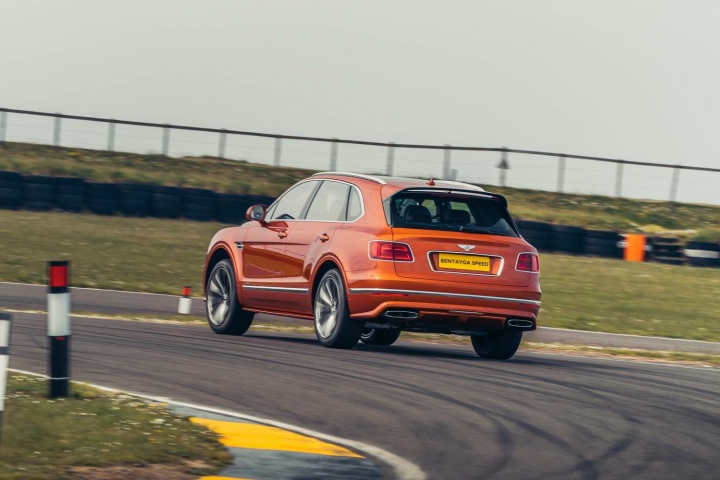 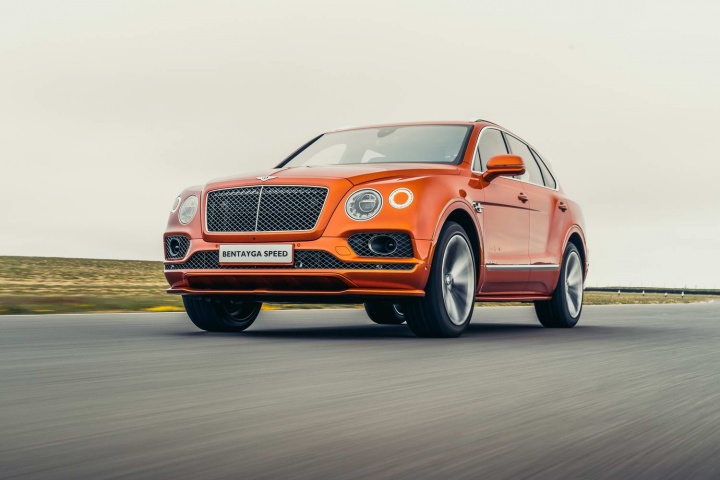 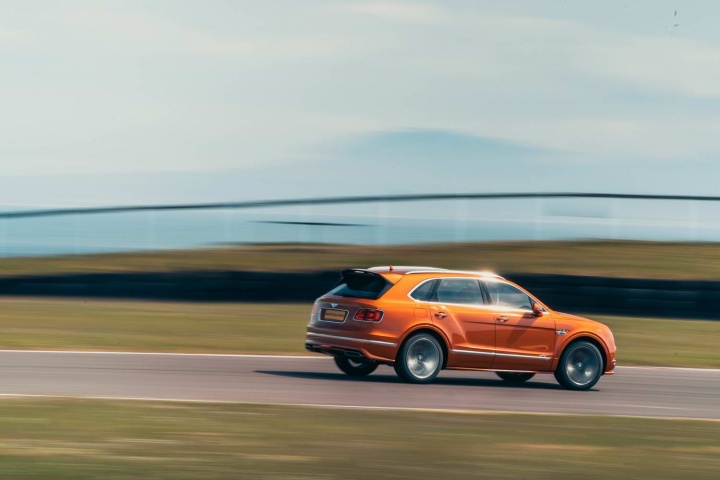 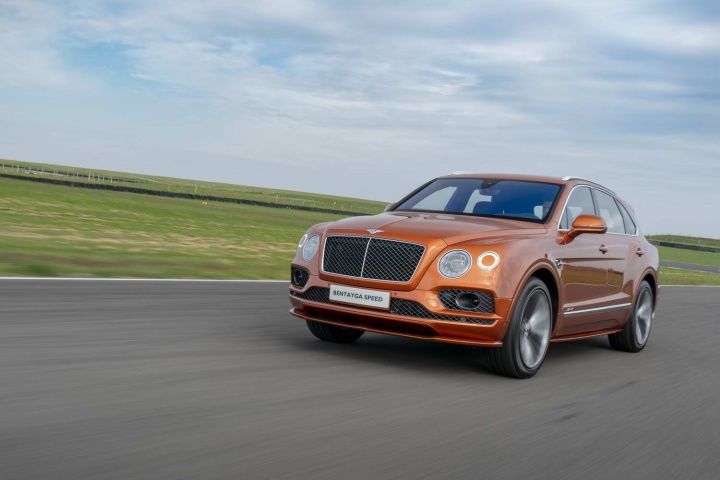 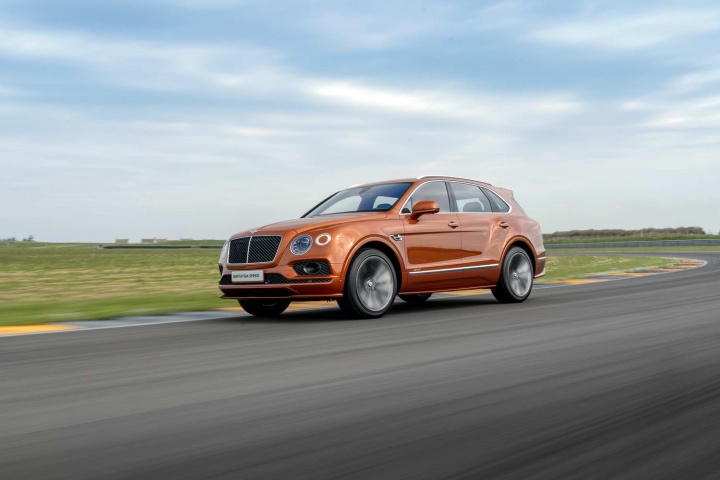 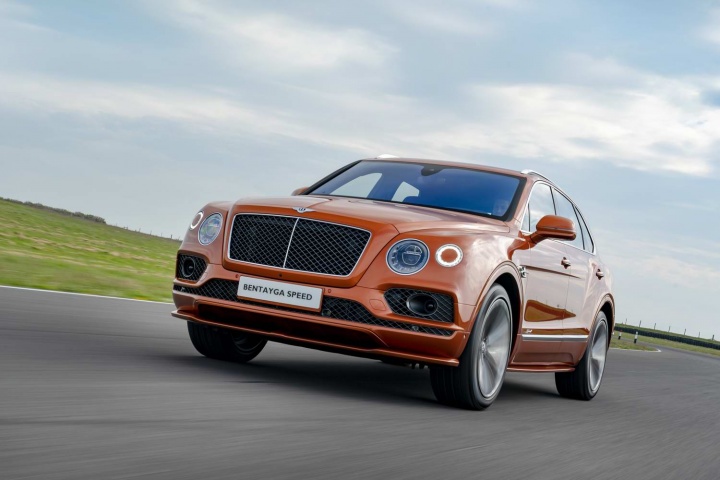 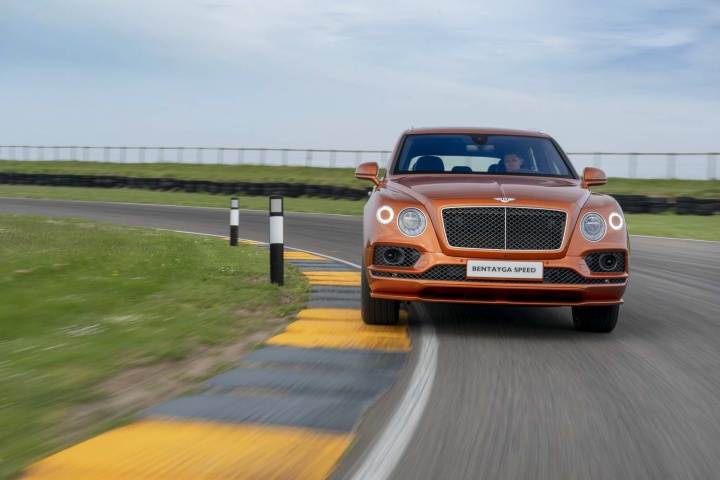 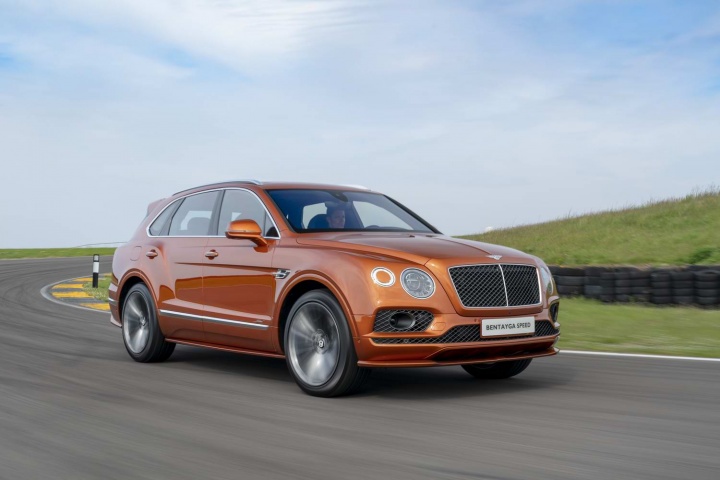 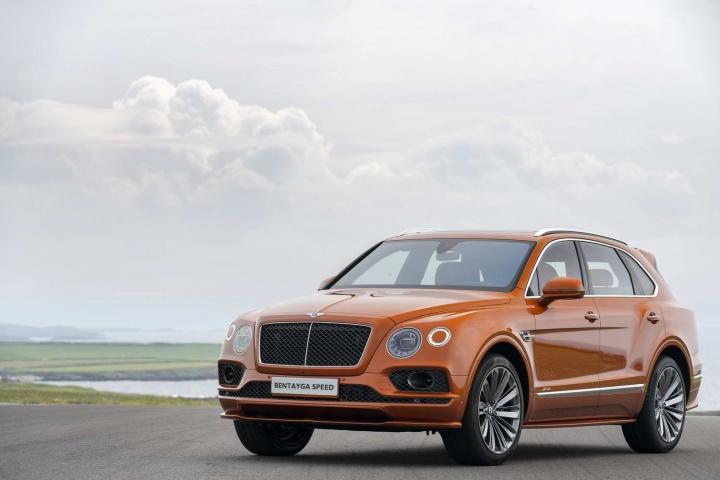 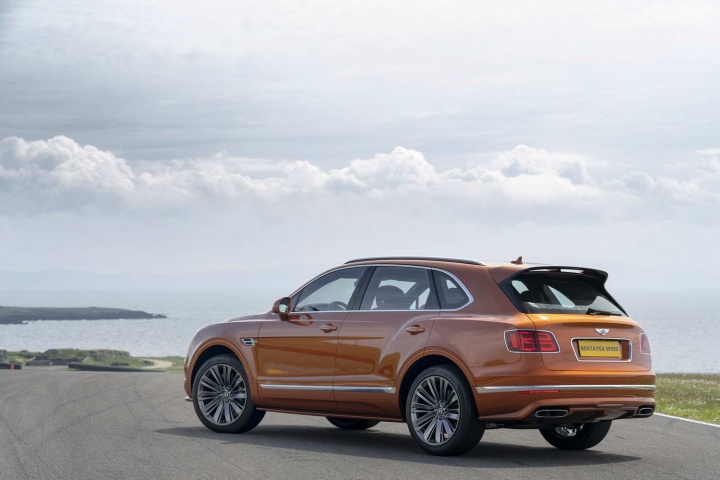 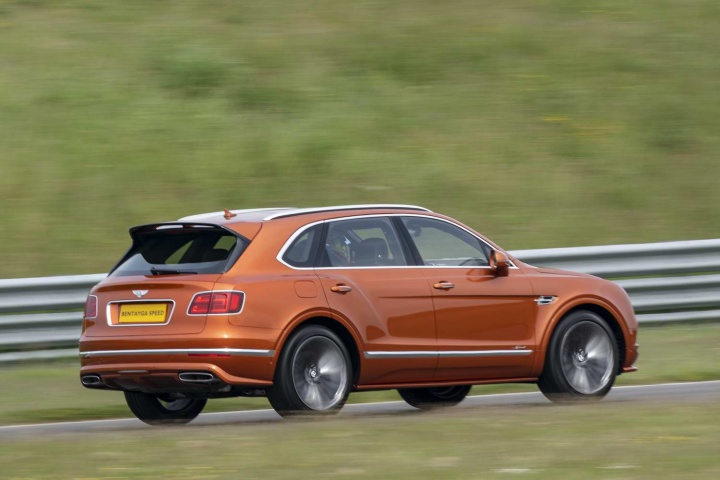 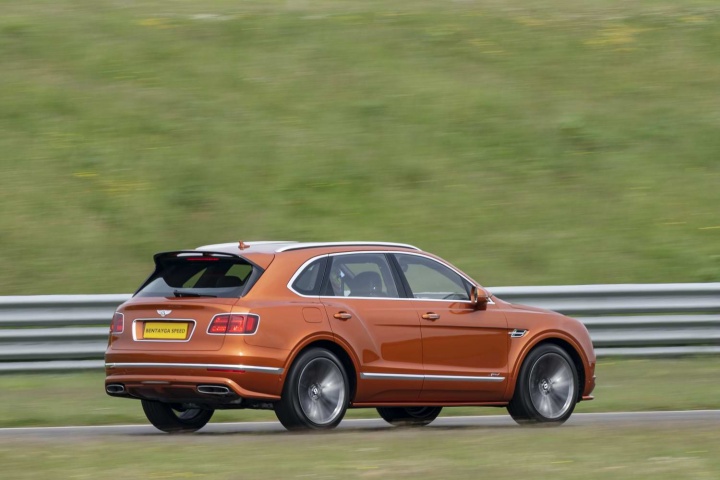 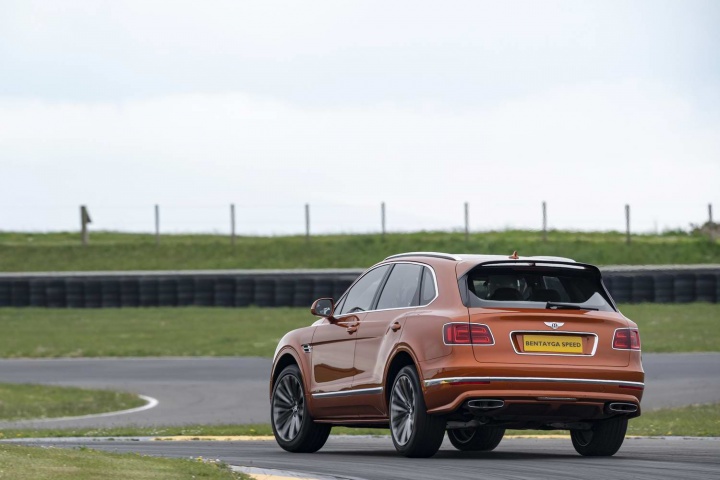 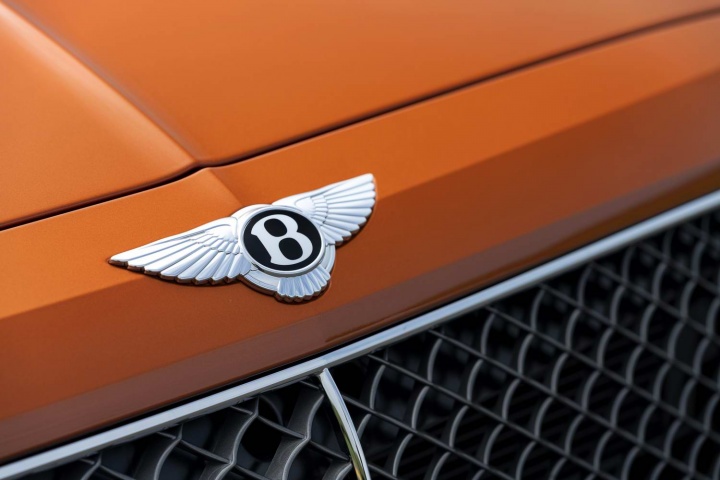 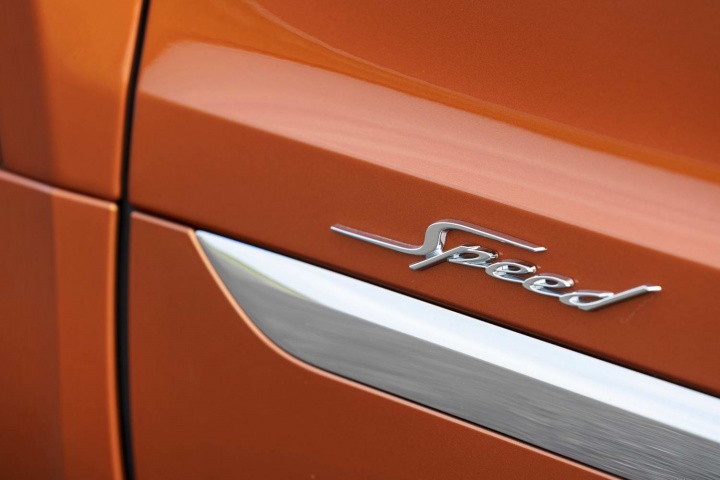 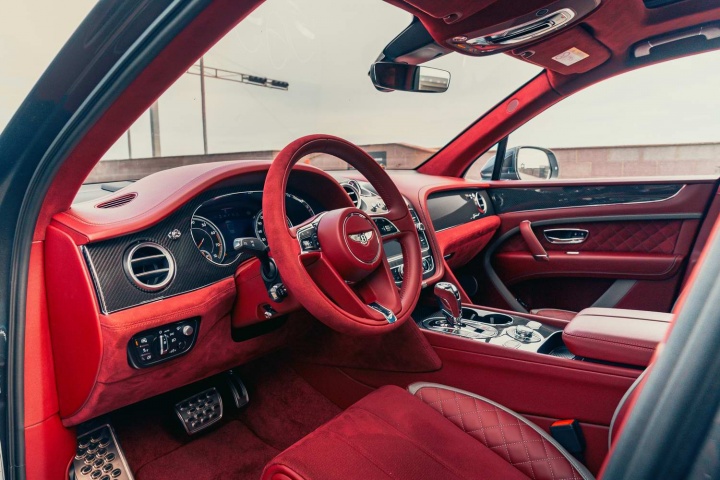 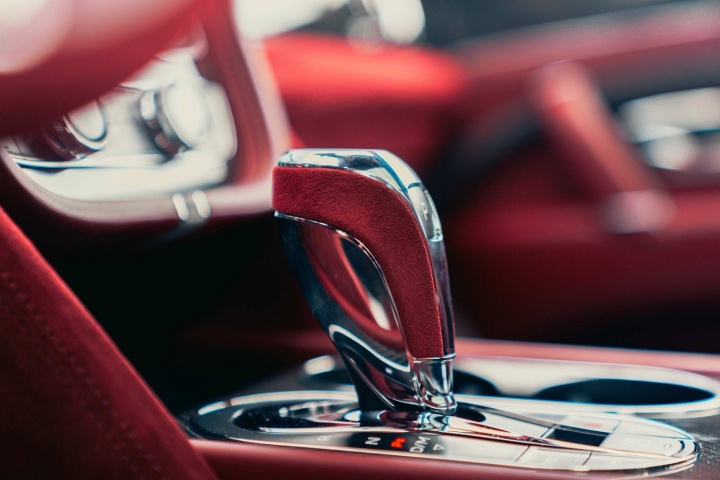 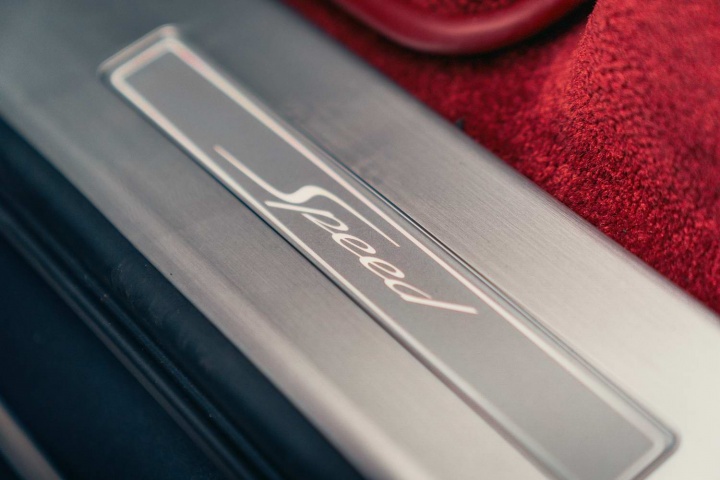 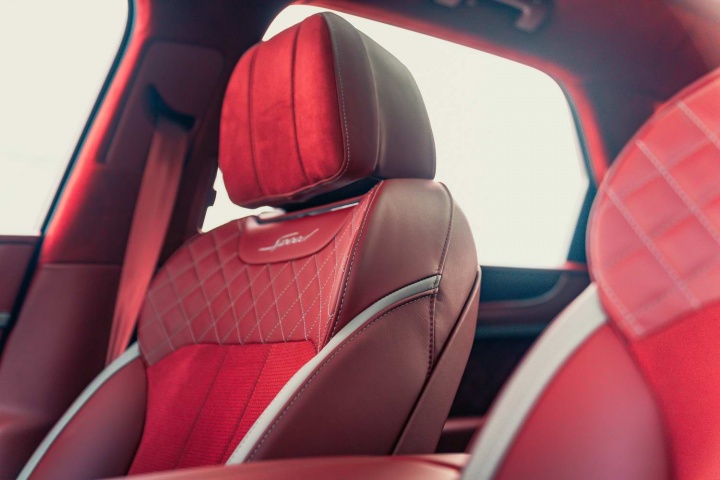 We drive the Bentley Bentayga Speed on track - apparently the world’s fastest SUV.

Bentley treats its first-ever SUV, the Bentayga, to the same sort of Speed treatment that it employs on its Continental GT. That means a touch more power from the monster W12 petrol engine, slightly sharper dynamics and enhanced looks - so is this new flagship, touted as the fastest SUV in the world (sorry, 305km/h just isn't enough, Lamborghini Urus...), the Bentayga to go for?

Balancing this section out and explaining our mark above is the fact that we're judging the interior (sublime) with the exterior (not so sublime). The Bentayga is not what you'd call conventionally pretty at the best of times and there will be plenty of people who are not fans of the Speed - especially in the Orange Flame paintwork of our test car. Speed models are denoted by some typical signifiers and the Bentayga has the same things: so the lower bodywork is enhanced, with skirts and splitters and trims and so on; discreet 'Speed' logos can be found at the lower-leading edge of each front door; the mesh grille at the front of the car is dark tinted; as are the front and rear lamp clusters; a big boot spoiler perches atop the tailgate; and the wheels are a Speed-specific design of 22-inch, ten-spoke items, available in three finishes - silver, dark tint or black.

Whether or not you think these styling accoutrements are a success will depend rather heavily on what you think of the Bentayga's general design-work in the first place, but you won't be able to criticise the sumptuous cabin. It's as magnificent as in any other Bentayga and is enhanced here with the liberal use of Alcantara (the first time this sporty material has found its way into the hyper-luxe SUV) some diamond stitching, a 'Speed' logo on the passenger-side dashboard, 'Speed' symbols in the sill plates and 'Speed' stitched into the head restraints of the seats. A two-tone colour split enhances the idea that you're in the King of Bentaygas when you're sitting in the Speed and, trust us, it works. Only the Cullinan has a better interior than this, in the entire world of SUVs and the like.

We should do that 'full disclaimer' thing here and tell you that our driving experience in the Bentayga Speed so far was limited to a handful of laps of the Anglesey circuit in Wales. So, with that in mind, we can't tell you what the Bentayga Speed is like at a steady cruise on the motorway. Nor can we tell you about how it handles itself when trundling around town. However, we can take a pretty good stab at these things, because the three pre-defined modes of the Bentley Drive settings for the air suspension/drivetrain/steering are, in the main, unchanged from the 'regular' Bentayga W12 settings. In both Comfort and 'Bentley' modes, the team from Crewe has left everything well alone, which means the Speed should be just as comfortable at everyday driving duties as its siblings, massive 22-inch wheels notwithstanding.

It's in Sport mode where you're going to feel the gains, because the Speed is aiming to be Bentley's most dynamic Bentayga yet. The programming of Sport has aimed to make the Speed more eager to turn in, while the exhaust note is amplified, the eight-speed gearbox is quicker to bang in shifts and the steering takes on more weight. While peak torque on the Speed is the same goliath 900Nm as you'd find on a W12 Bentayga, the peak horsepower has risen to 635 - an increase of 27hp, which is enough to bump up the top speed by 5km/h and trim two-tenths from the Bentayga's 0-100km/h time.

On track, it feels epic... for a 2,491kg SUV at any rate. There's a definite improvement in the way the Bentayga Speed will rotate itself inwards towards the apex of a corner, while the rear-biased torque split means you can feel the back end of the car moving, to a quite significant degree, when you want to tighten or open your line with nothing more than a lift of the throttle and a different input of steering lock; obviously, this rear-biased tendency was rather more dazzlingly demonstrated by Bentley's pro-driver, later in the day, who took us on a scorching passenger lap and managed to get the Speed into a beautiful and elegant four-wheel drift through one fast right-hander.

It also sounds good, the criticism of the W12 normally being that it's a bit too quiet for its own good in other Bentley applications, the Bentayga included. No doubt the Speed has added noise, with a nice rumble from the exhausts on downshifts and lifts of the throttle, but it's still not quite as appealing as the V8 petrol model Bentley offers further down the tree. Nevertheless, the Bentayga Speed feels sharp and involving on a track like Anglesey, which is not an environment in which you'd expect such a heavy, opulent SUV to perform well.

The only thing is, we know just how good the regular W12 is at masking its bulk and handling as if it were half the size it actually is. And being on a track also masks the sensation of speed in a road car, which is... unfortunate for a vehicle that's called Speed. In essence, what we're trying to say here is that we liked the way the Bentayga Speed handled; and yet, we couldn't really discern a clear and notable dynamic edge that would make you go for it, over and above the 608hp W12. Which is, in itself, a quite astounding piece of chassis engineering.

To be honest, the interior and the standard equipment levels of the Bentayga are superb enough, but there's a long options list that can elevate the Bentley's hefty starting ticket to dizzying new heights. Add in the fact that, unless you need the Speed's tricky-to-perceive dynamic edge over the other Bentaygas in the family, then you're better off with, say, a Bentayga V8 and the financial case for this ultimate SUV becomes a little trickier to justify - unless you simply want 'top dog' bragging rights with your car.

An excellent and completely understandable addition to the Bentley Bentayga line-up, the Speed is naturally well worthy of consideration and - for the sort of buyers that operate at this exalted level of car purchasing - it will be the one they go for, simply by virtue of its undisputed flagship status that is afforded to it by its price, its power output and its claim to the 'fastest SUV in the world' title. However, as superb as it is, the regular W12 does a stunning job too. As does the V8 petrol version, which is even sweeter to drive thanks to its preferable soundtrack and lighter engine over the nose. So while we are absolutely not arguing the fact the Speed is brilliant and has enough of a business case to merit its existence, on this showing so far it's not quite the first Bentayga we'd recommend to you. 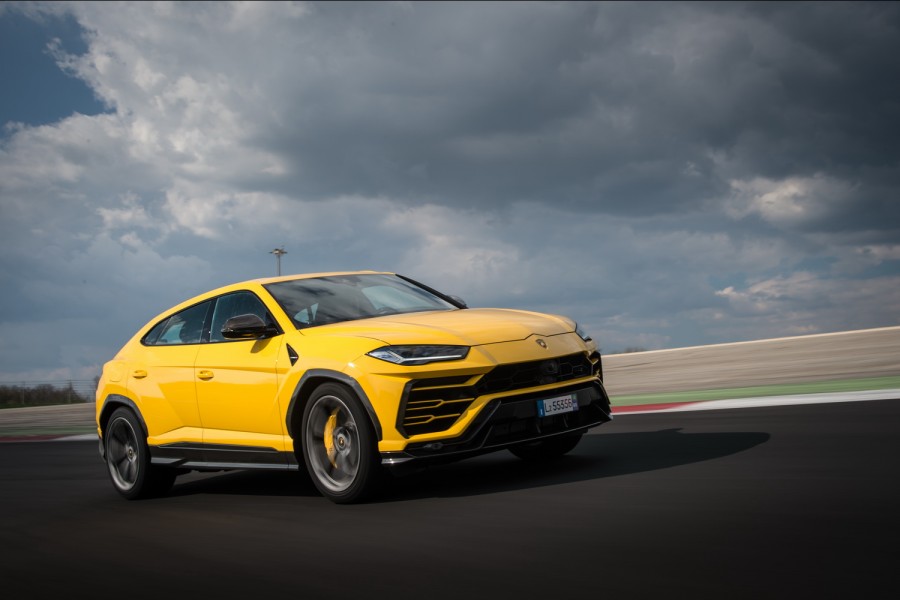 Lamborghini Urus review
Lamborghini Urus vs. Bentley Bentayga Speed (2019): briefly beat the Bentayga W12's top whack of 301km/h with a 305km/h ceiling, only to see the Speed fight back with 306km/h. Edgy styling and sport-focused outlook make this a very different SUV beast.

Porsche Cayenne Turbo Coupe (2019) review
Porsche Cayenne Coupe Turbo vs. Bentley Bentayga Speed (2019): another one focused on handling and sportiness, before luxury and imperious refinement. Coupe SUVs have their own particular breed of detractors, but the Cayenne version drives brilliantly. 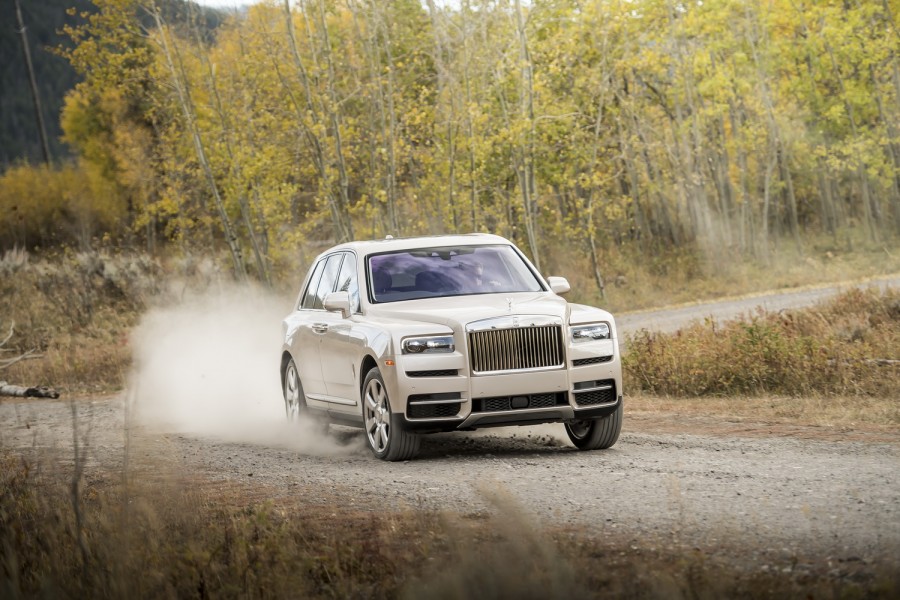 Rolls-Royce Cullinan SUV (2019) review
Rolls-Royce Cullinan vs. Bentley Bentayga Speed (2019): any review of the Bentayga is going to inevitably have to make reference to the Roller, which is a stunner in terms of its luxury and refinement... but chassis-wise, the Bentley Speed is miles ahead for handling.