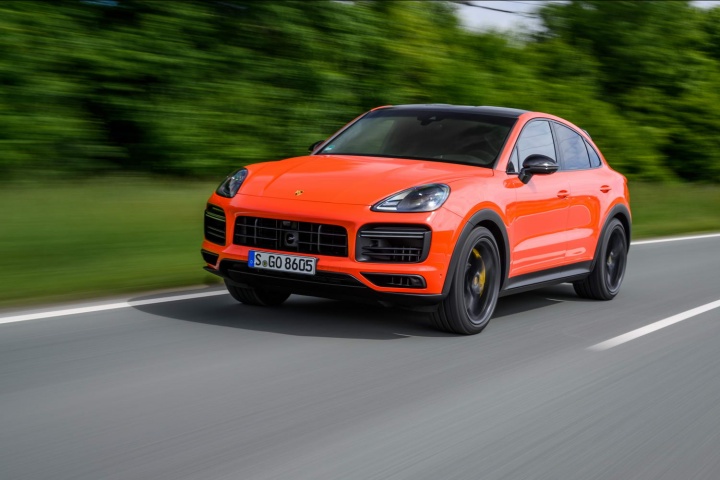 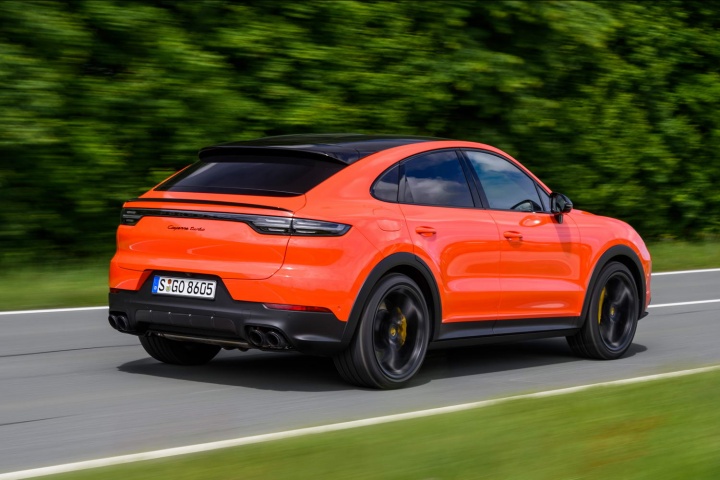 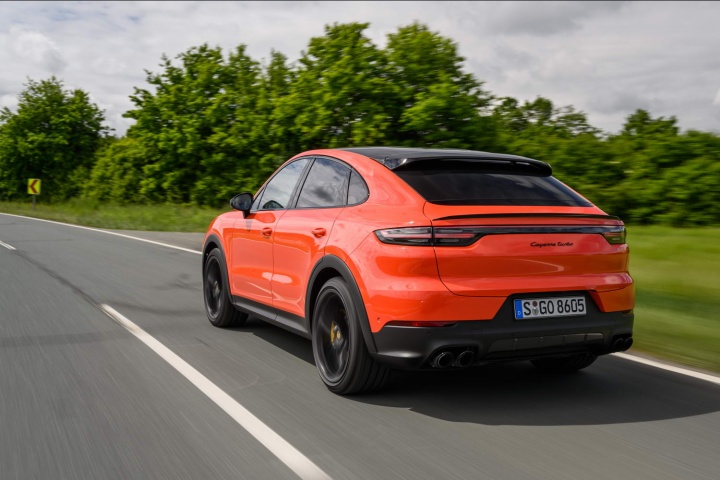 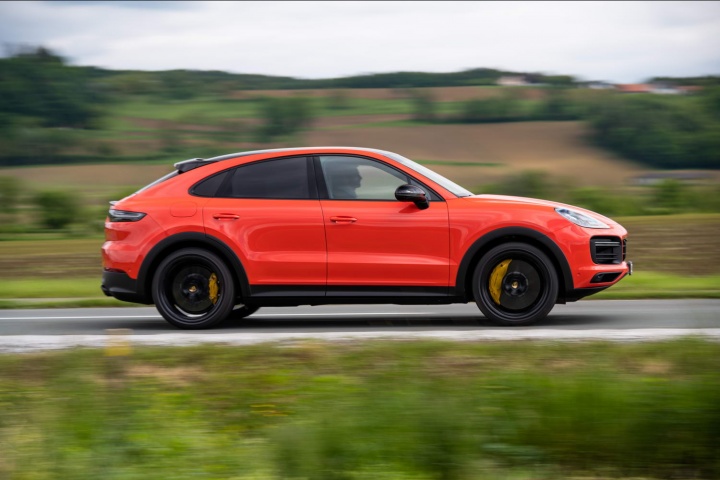 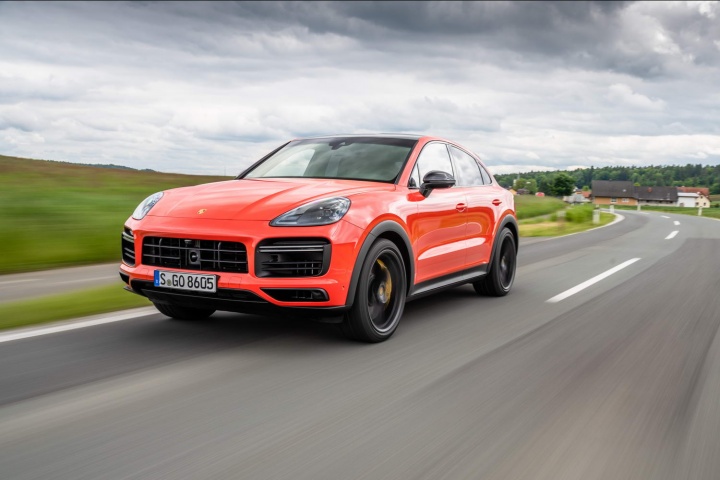 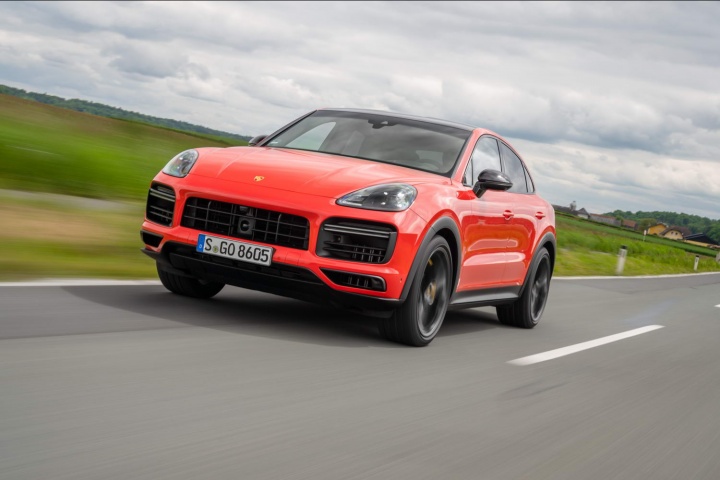 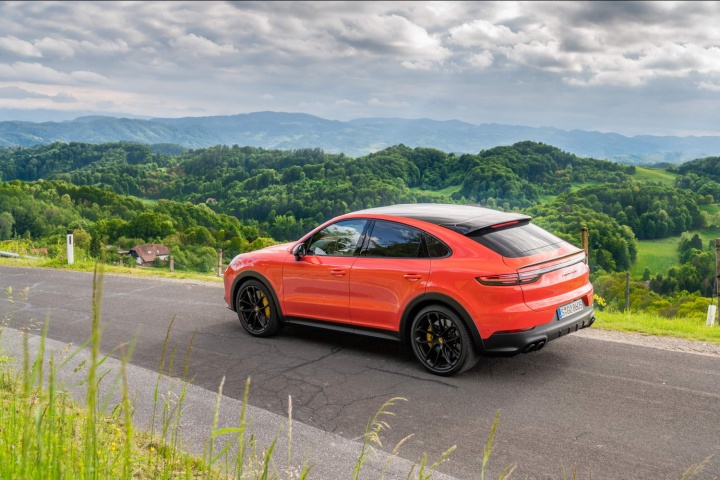 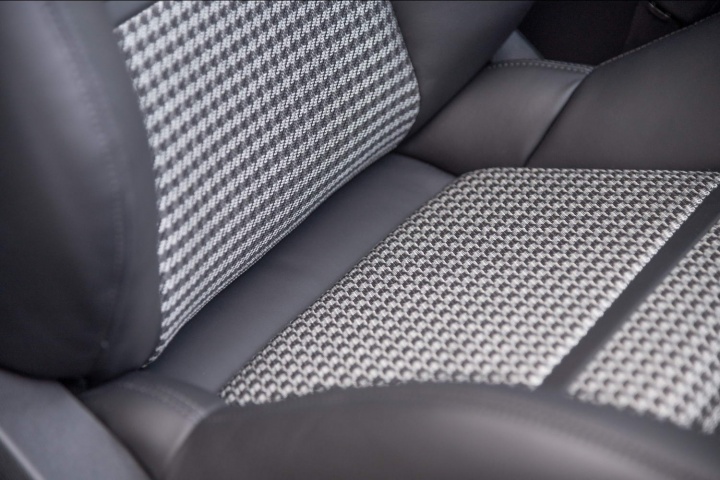 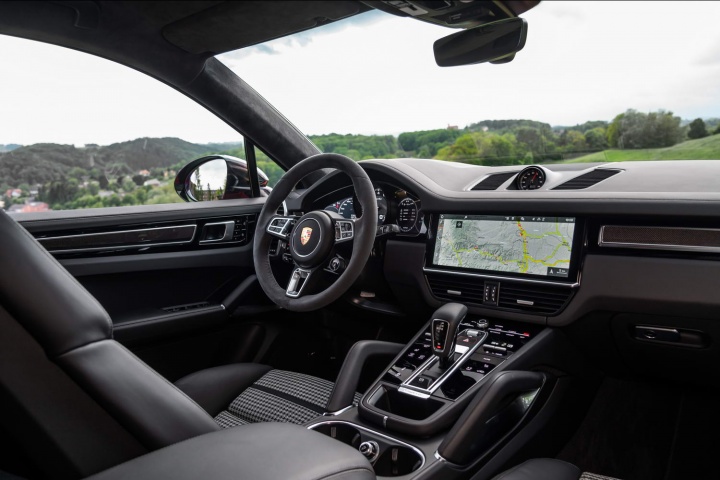 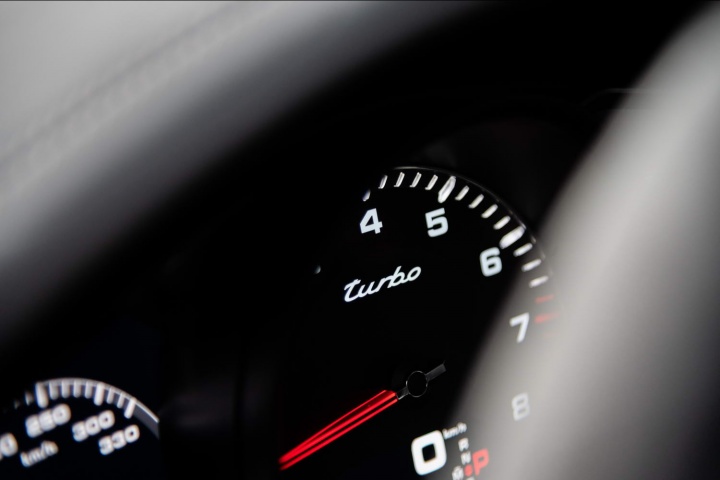 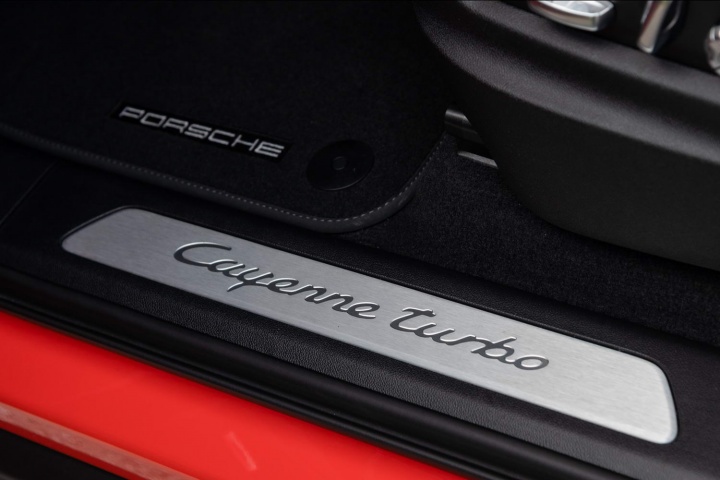 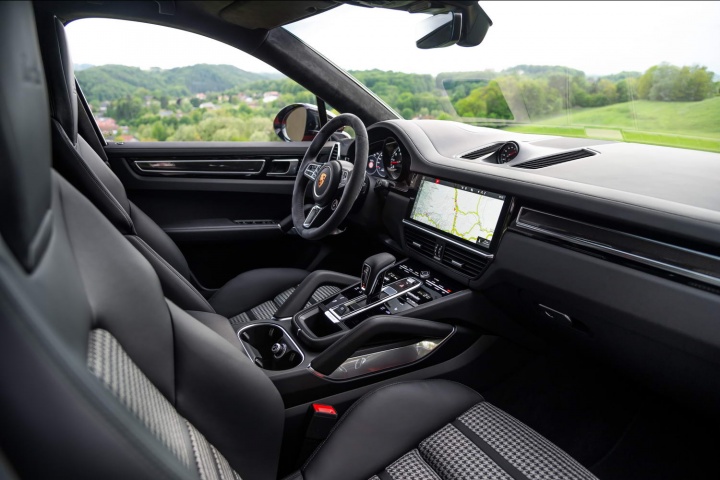 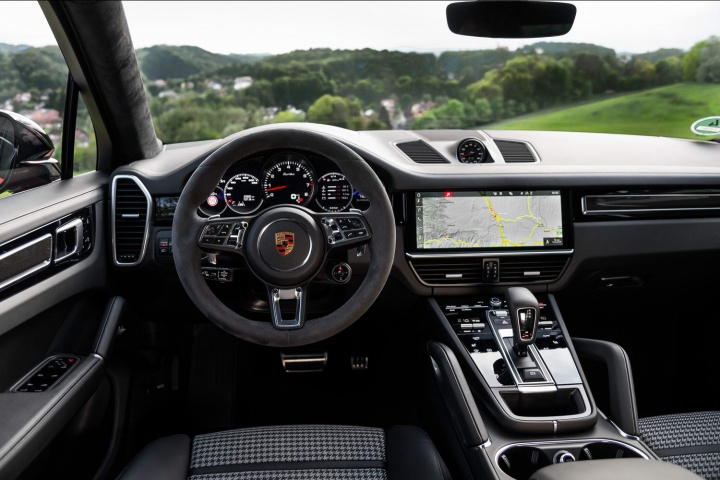 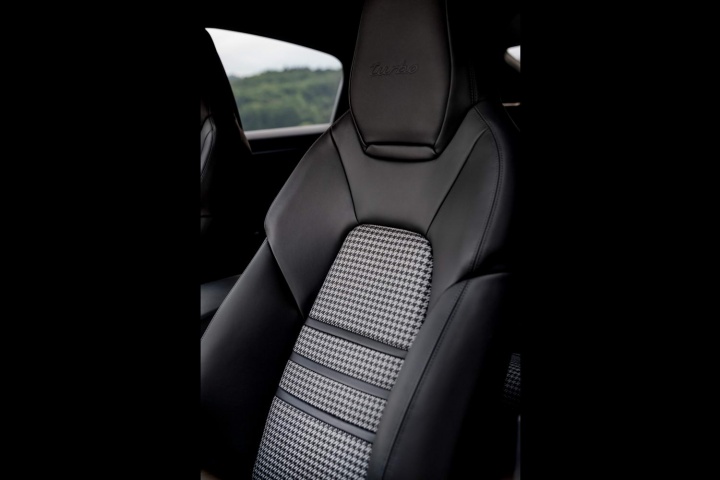 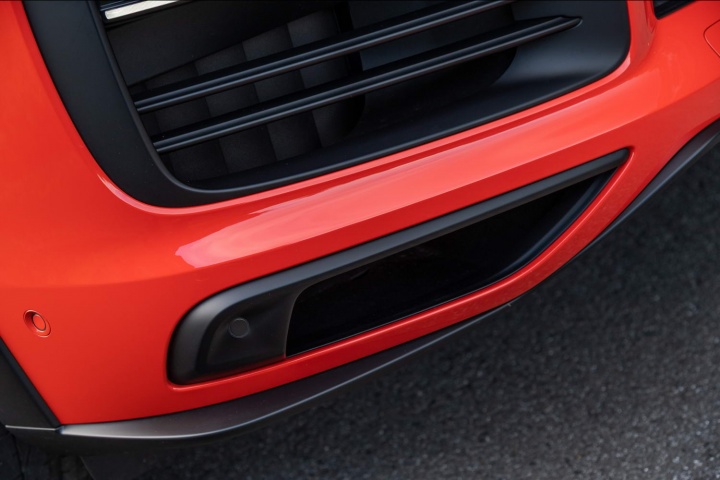 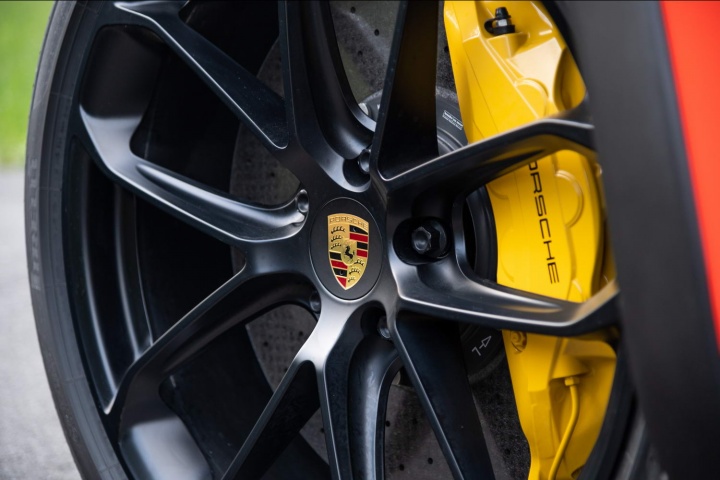 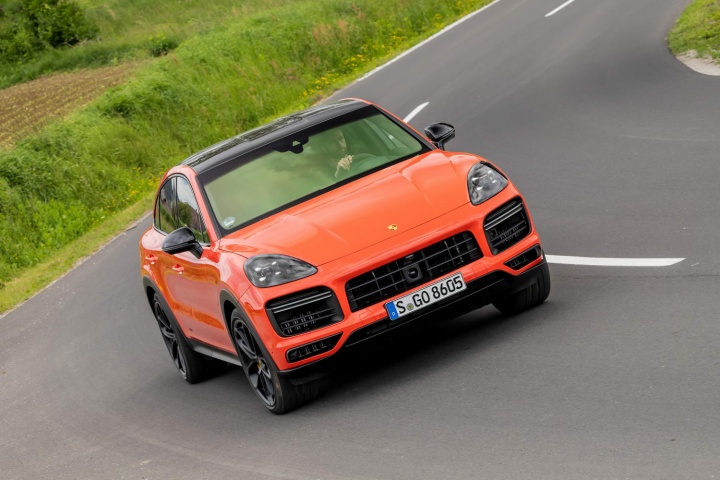 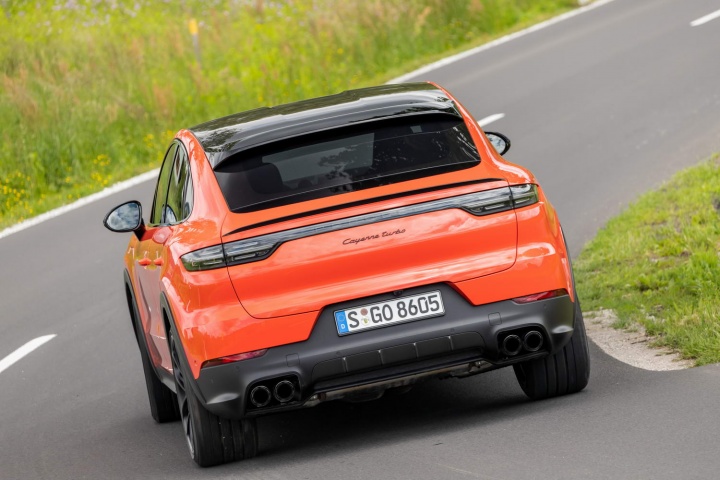 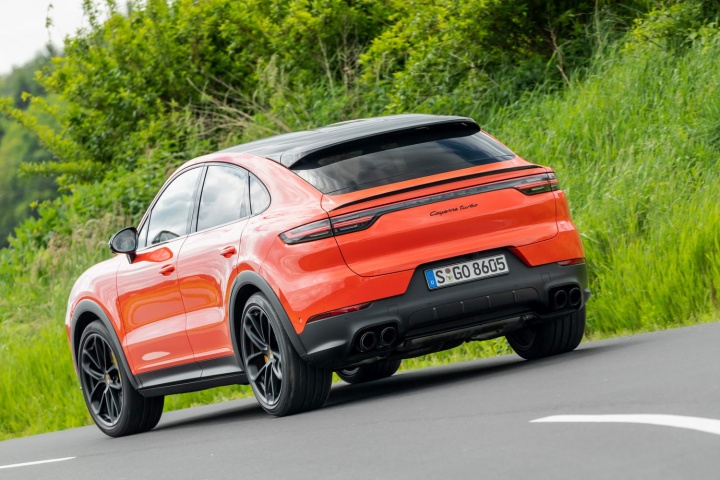 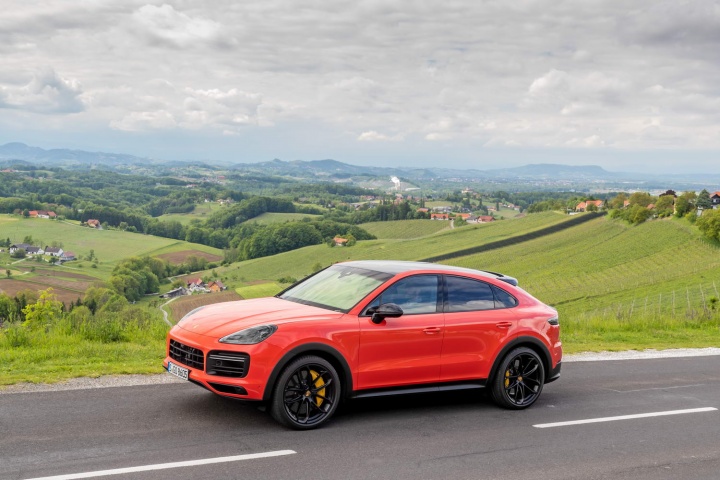 Arguably, the new Porsche Cayenne Coupe is the most stylish of the 'coupe-SUV' breed, managing to marry the strange bedfellows of SUV and coupe in one desirable package that isn't massively less practical than its Cayenne sibling. Extra equipment and a little more focus on dynamics enhance its appeal, though most are likely to buy it for status and image reasons. Even if you're not a fan of the genre, there's no denying that this is one of the most entertaining SUVs on the market to drive. Here we test drive the current range-topper, the Cayenne Turbo Coupe.

The initial images that Porsche released of its new Cayenne Coupe did not do the car justice. And actually, the striking orange and black colour scheme of the Turbo model pictured here does it no favours, as, in a classier metallic shade, I reckon that the Cayenne Coupe is the most attractive looking SUV in the Porsche line-up right now. It's a curious shape from some angles, looking little different to the regular Cayenne from the front and front three quarters, but a surprising amount of sheet metal has changed.

The roof has been lowered by 20mm for a start, and the A-pillar and windscreen are more raked, while there's a fixed spoiler at the trailing edge of the roof, itself curving gently to the rear of the car. There, the bodywork (including the slender lip spoiler) between the rear glass and full-length LED lights (quite different in design to those on the regular Cayenne) lifts to create a much more prominent spoiler at 90km/h, called Porsche Active Aerodynamics by its maker. More subtly, the rear doors and wings have been widened to give the Coupe more muscular haunches, while the number plate is mounted in a restyled rear bumper.

Externally, the Cayenne Turbo Coupe is differentiated from its lesser siblings by the standard fitment of 21-inch alloy wheels (22s are optional), a unique front bumper that appears to have one large air intake, unusual horizontal LED daytime running lights up front, twin exhaust outlets in brushed stainless steel and a larger lip spoiler.

It's worth noting that the car pictured has been fitted with the optional Lightweight Sports Package, which trims 21kg from the overall mass while reducing the centre of gravity thanks to the addition of a carbon fibre roof, less sound insulation and other bits and pieces. It does, however, mean giving up the Cayenne Coupe's standard panoramic glass roof. This looks fantastic from outside or in, giving the cabin a unique feel. Naturally it comes with a blind.

That interior isn't as compromised by the new design as you might expect. As standard, the Cayenne Coupe comes with a four-seat layout with extra storage between the two rear seats. These have been lowered some 30mm from the regular Cayenne's, so headroom once you're inside is more than adequate. The rear door openings are smaller, but not drastically so. The boot, however, has reduced in size, from the gargantuan minimum of 745 litres (that's the Cayenne Turbo, which holds less than its siblings) to 600 litres, which should still be ample for most needs. The rear seatbacks split and fold down, as well as reclining. Most buyers are expected to opt for the no-cost change to a five-seat layout.

Up front, the Cayenne Coupe gets a new design of sports seats with integrated headrests, which look and feel great. The Turbo model's front chairs are 18-way electrically adjustable and various upholstery options include a faintly retro part-leather, part houndstooth textile mix, which is lovely. The dashboard and driving controls are as per the normal Cayenne, which is to say high-tech and pleasing on the eye. In short, this car looks and feels worth its high price.

Without taking the wheel of the Cayenne Turbo Coupe for yourself, it'll be difficult to grasp how well-sorted a car this is. Its twin-turbocharged 4.0-litre V8 petrol engine produces massive performance from seemingly anywhere in the rev range, whether you're ambling about in the default driving mode or creating a little more noise through the sports exhaust in the Sport Plus setting. A power figure of 550hp is impressive enough, but the 770Nm of torque is to thank for the way this powerplant shrugs off the weight of the Cayenne and catapults it down the road. There's just no need to use all the available revs to make indecent progress in any given situation. Though you may want to extend the engine to hear its stirring soundtrack...

The eight-speed automatic transmission is a willing partner to this unit, whether it's smoothly transitioning from one gear to the next in its most relaxed guise or more obviously banging the ratios in as you dial up the driving modes on the (standard as part of the included Sport Chrono package) rotary control on the steering wheel. You can take over gear-changing by using the tactile paddles behind the wheel, too, which is fun, but there's no need for it in reality as the transmission is super-quick to react and the engine massively flexible.

As impressive as this powertrain is, it doesn't define the car, as Porsche has created something remarkably balanced, here, so that the chassis' abilities stick in your memory just as long as the noise that V8 makes. It's off to a good start with exceptional steering weighting and feedback for a car such as this. It's probably worth investing in the rear-wheel-steering option, too, as it'll help with parking as well as low-speed agility and high-speed stability. As standard, the Cayenne Turbo Coupe gets air suspension, along with adaptive damping (or PASM - Porsche Active Suspension Management), so it's constantly adjusting to the situation and you can alter the base level via the driving modes.

On 22-inch wheels, the Turbo model felt firmly sprung yet controlled. What's more, it somehow does that cliched thing of shrinking around you when you're tackling an interesting road, managing weight transfer, heavy braking and direction changes with far more competence than anything this tall and heavy should. What's more, it's actively really good fun in the corners, though admittedly, to push the Turbo model beyond its considerable grip and traction requires huge commitment and, realistically, the confines of a racetrack. The mere mention of that in the context of an SUV should give you a firm impression of how sporty this Cayenne is to drive. And yet, it's never uncouth or seriously uncomfortable, either.

The range kicks off with the 3.0-litre turbocharged V6 Cayenne Coupe, at €111.814, and rises through the twin-turbocharged 2.9-litre V6 Cayenne S Coupe (€132,563) to the Turbo variant featured, which starts at €194,333. Porsche has also confirmed that there will be a plug-in hybrid version in the very near future.

All models of Coupe are better equipped than the equivalent Cayenne SUV, featuring Sport Chrono and the glass roof as standard for starters, which makes the premium entirely reasonable.

Unless you really need the massive space that the regular Porsche Cayenne offers, we reckon that the new Coupe model is the body style to have. It looks better (to these eyes), has more equipment and even more focus on the driving experience. The Turbo model is, strictly speaking, completely unnecessary, but its performance is delivered in a polished fashion, so it's no hard-edged and compromised sportster. Quite the opposite: befitting its position at the top of the Cayenne Coupe tree, it's undoubtedly the finest model in the range. 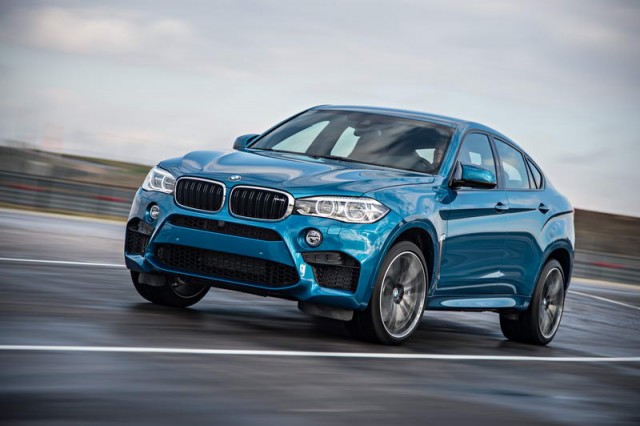 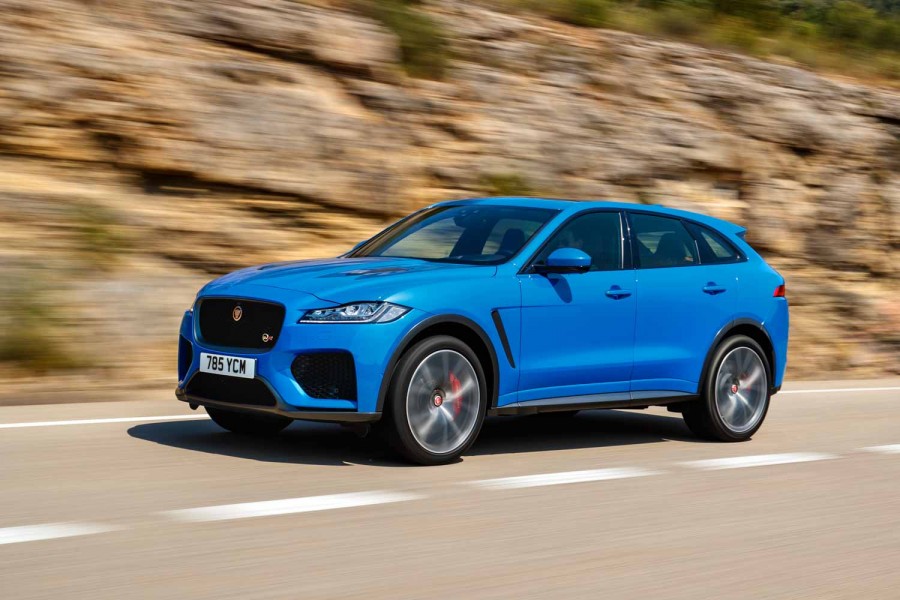 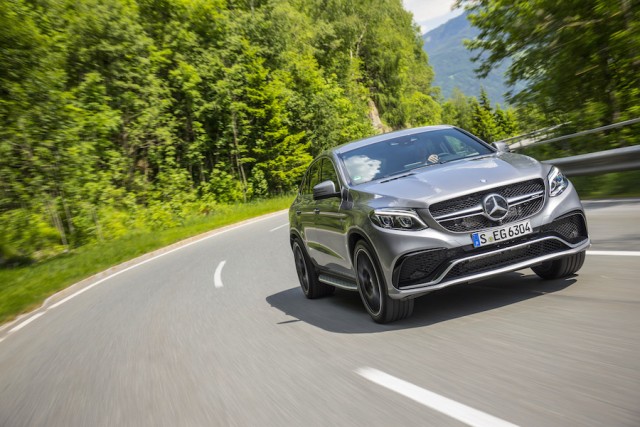