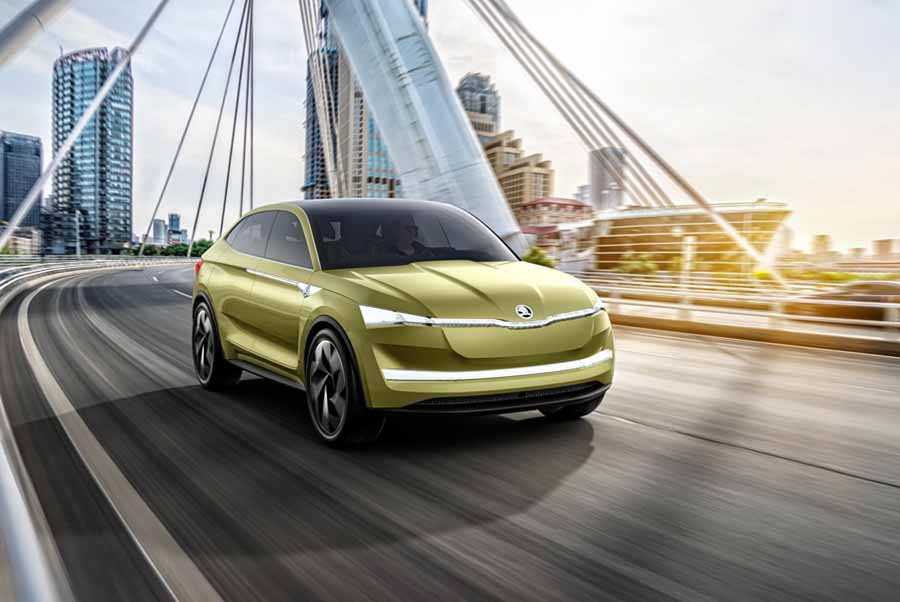 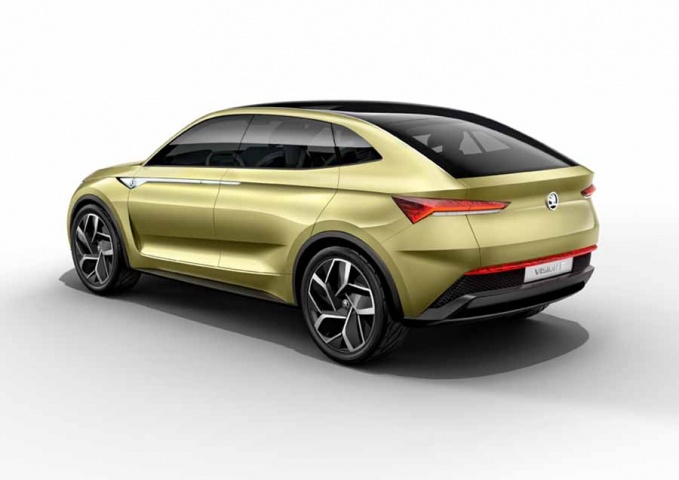 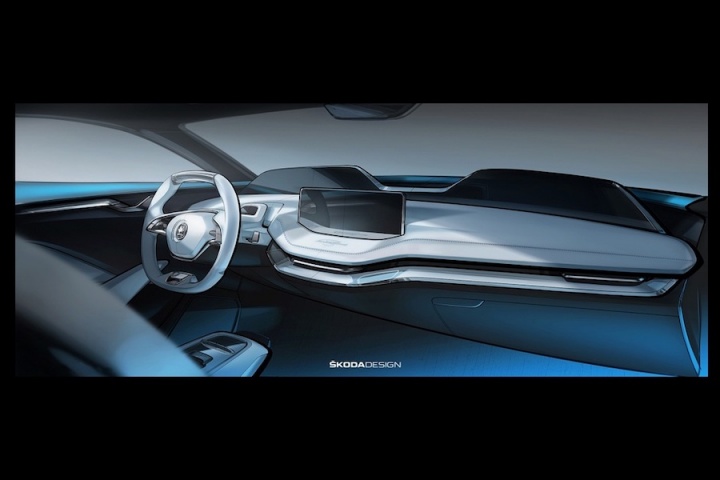 It uses a two motor setup for all-wheel drive and 305hp (close to the specs of Volkswagen’s own, related, I.D. Crozz Shanghai concept) and Skoda claims that it can go for 500km on a single charge-up, with a top speed of 180kmh. It’s also been designed around ‘Level 3’ autonomy, meaning that it can take total control, but it’s not a driverless car in the strictest sense.

In terms of driver assistance systems, there will be a new Traffic Jam Assist feature, along with autopilot for motorway driving and car park autopilot. The display and operating concept includes digital HMI; gesture control; voice control; Eye Tracking; Driver Alert fatigue detection; heart rate monitor, while Skoda continue to place emphasis on top class infotainment and connectivity systems, including: capacitive touchscreens in the Skoda glass design; occupants are ‘always online’ thanks to an integrated Wi-Fi hotspot and an LTE module.

Style-wise, it lifts much from the existing Skoda range, with tightly-drawn, simple surfaces and a touch of the ‘crystalline’ styling seen on the Kodiaq, which Skoda says is a reference to classical Czech and Bohemian glass work. The Vision E also lifts Audi’s Matrix LED headlamp tech, suggesting that it might make an appearance as a high-end option on Skoda’s range shortly.

There are no wing mirrors, as is concept car tradition, and they’re replaced by small rear-facing cameras.

Inside there are body contoured seats, a flat floor (thanks to the lack of a transmission tunnel) and lots of space thanks to a 2,581mm wheelbase.

Speaking about the unveiling of the Vision E, Raymond Leddy, Head of Marketing at Skoda Ireland, said: “Over the last number of years we have seen some wonderful design concepts from Skoda. The Vision S for example was followed quickly by the Kodiaq which has become an instant success. Now the Vision E concept gives us a glimpse of what Skodas first ever electric car will look like. The Vision E concept has a range of ‘Simply Clever’ features which have become a trademark of Skoda. One of these exciting innovations include wireless charging using a floor panel, which takes just 30 minutes to reach 80 per cent of the battery’s capacity. The Vision E is designed to make autonomous driving achievable with seats that slide backwards and a movable steering wheel as well as seats can be rotated by up to 20 degrees. Skoda customers can look forward to driving our fully electric cars on Irish roads by 2019.”