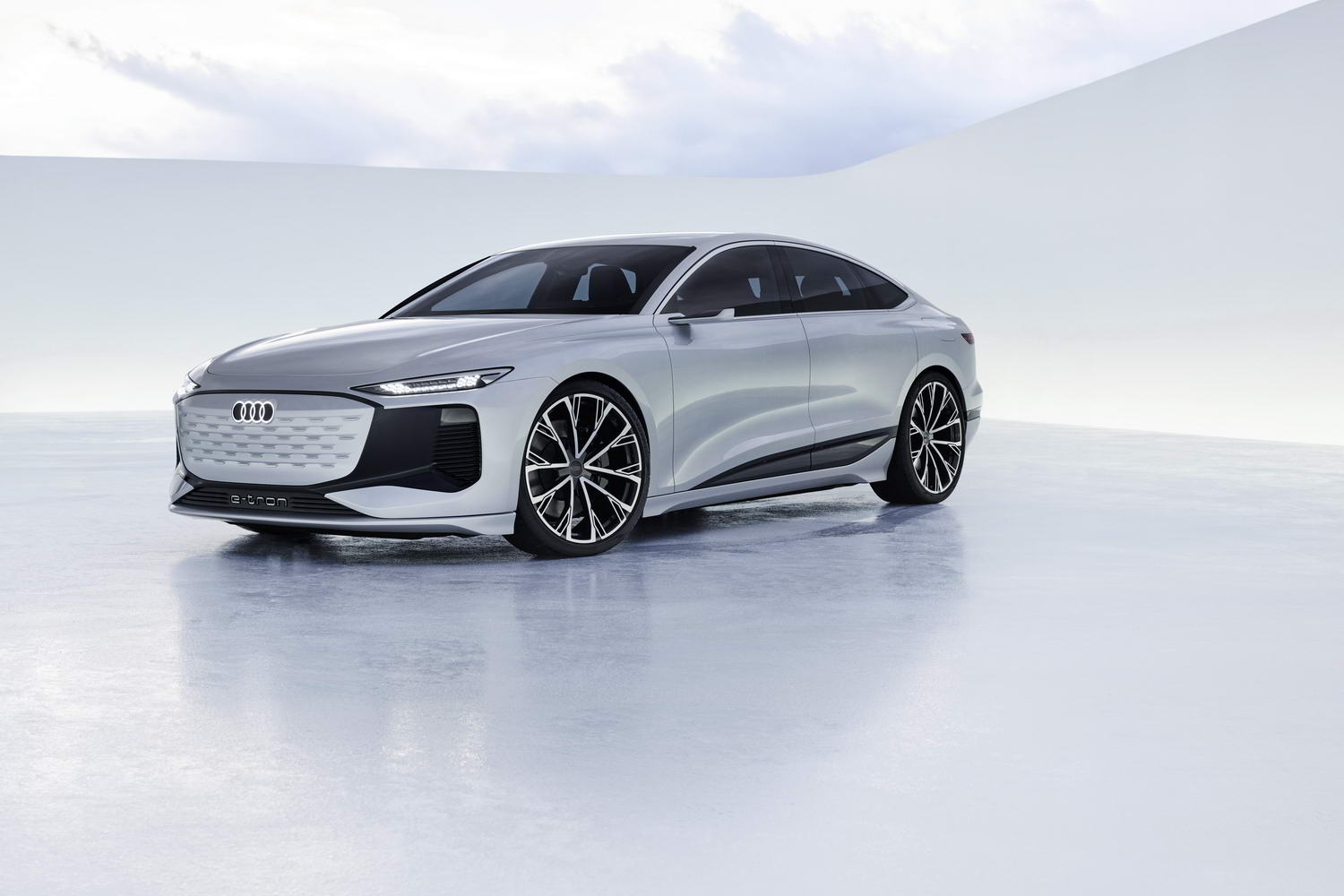 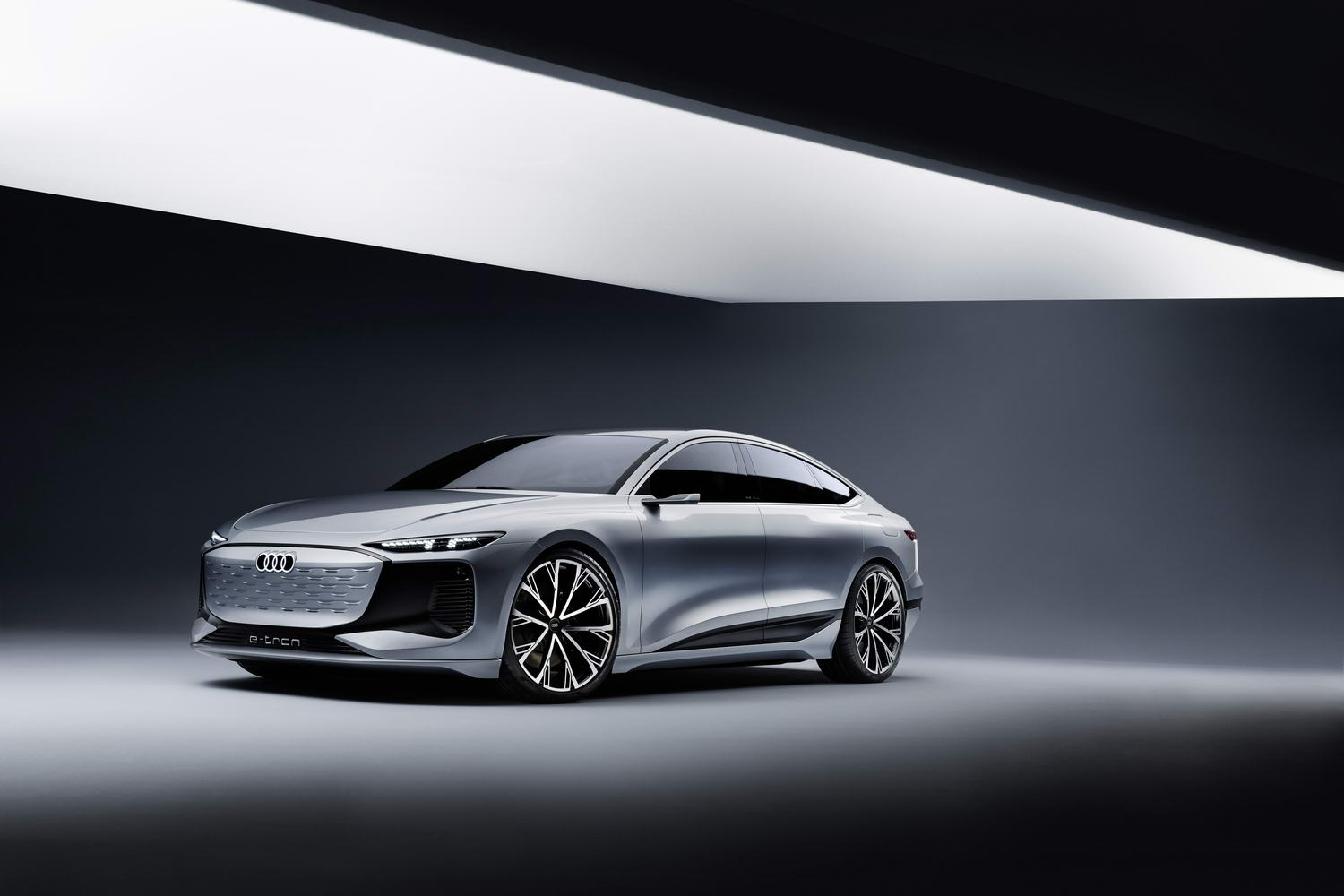 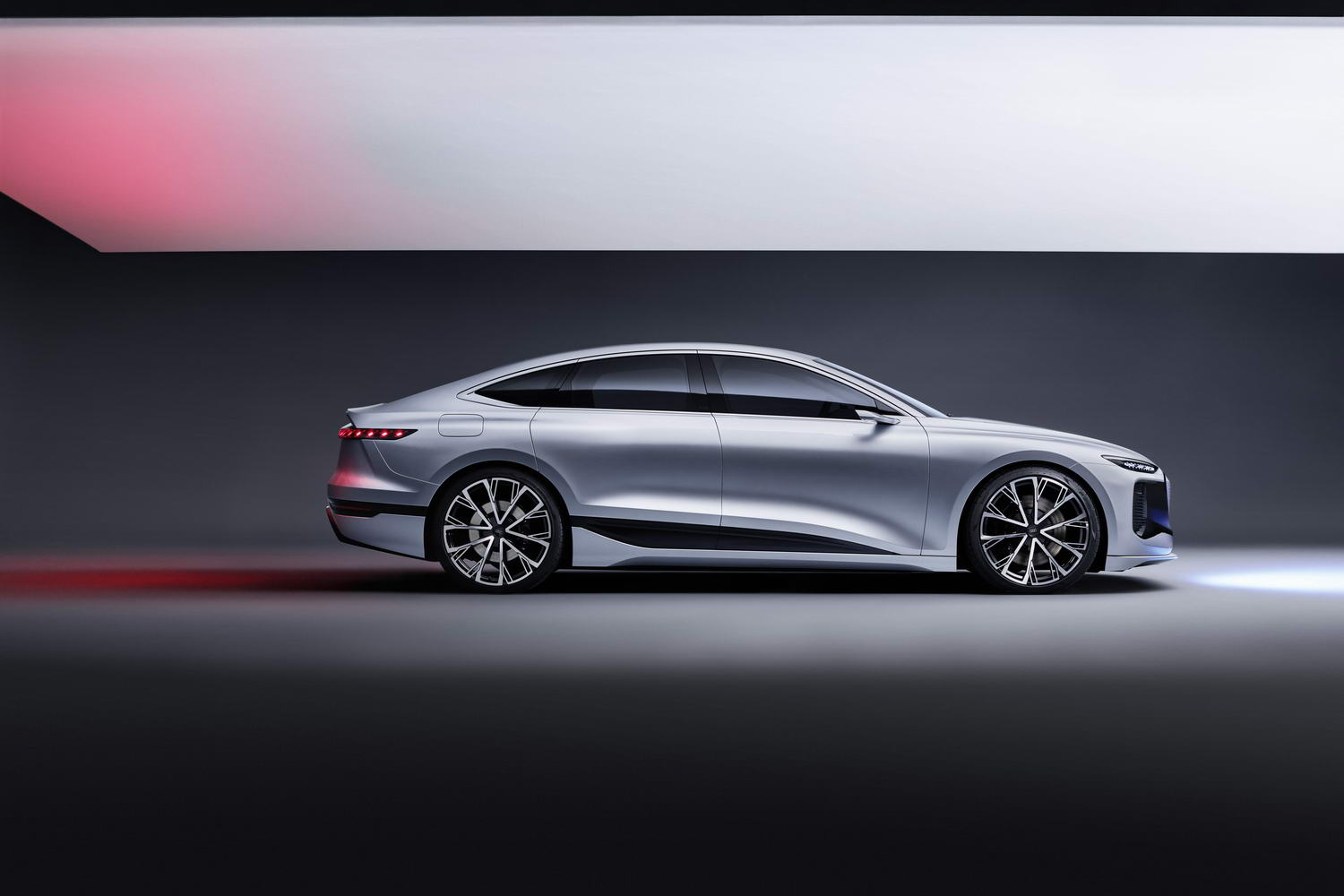 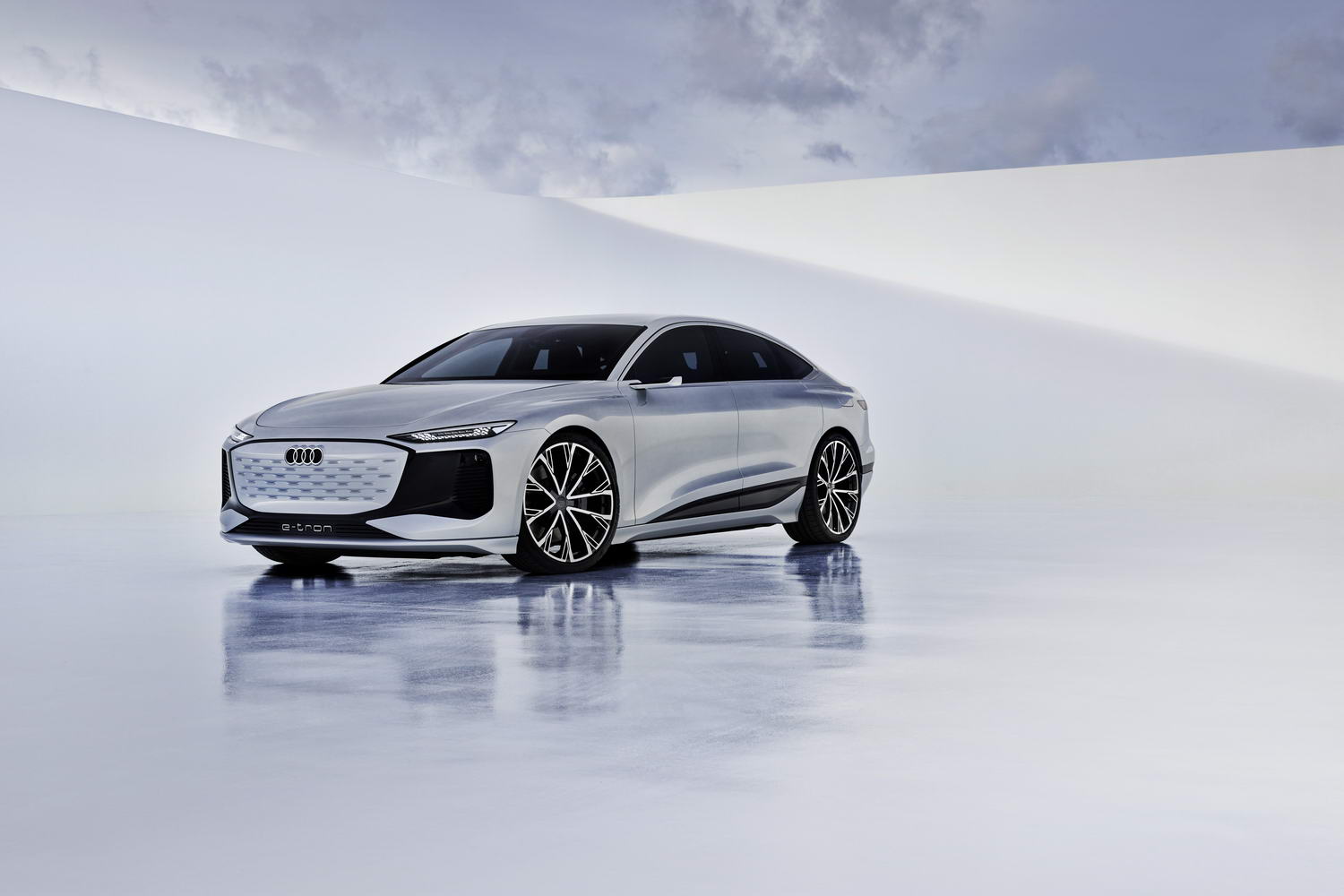 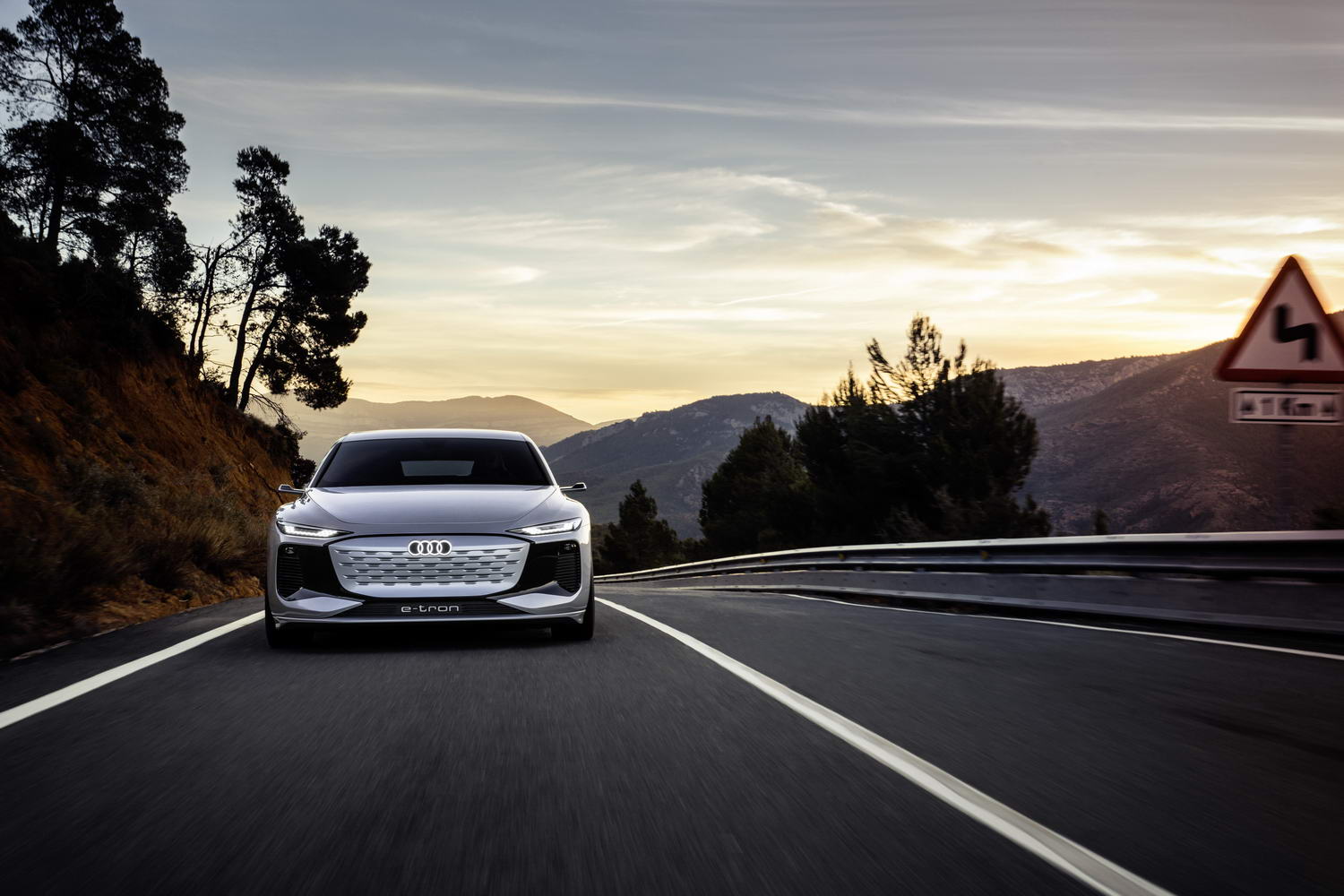 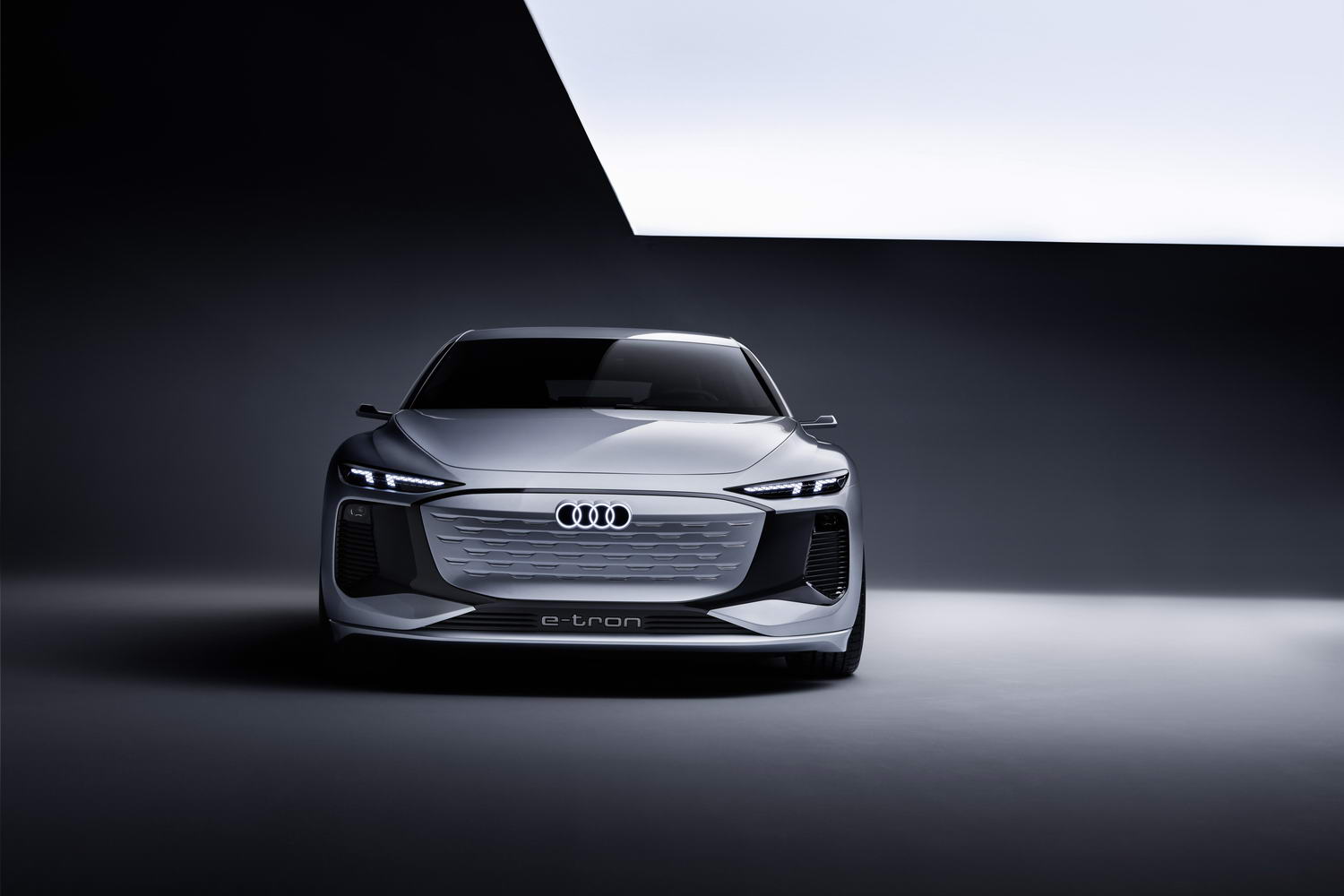 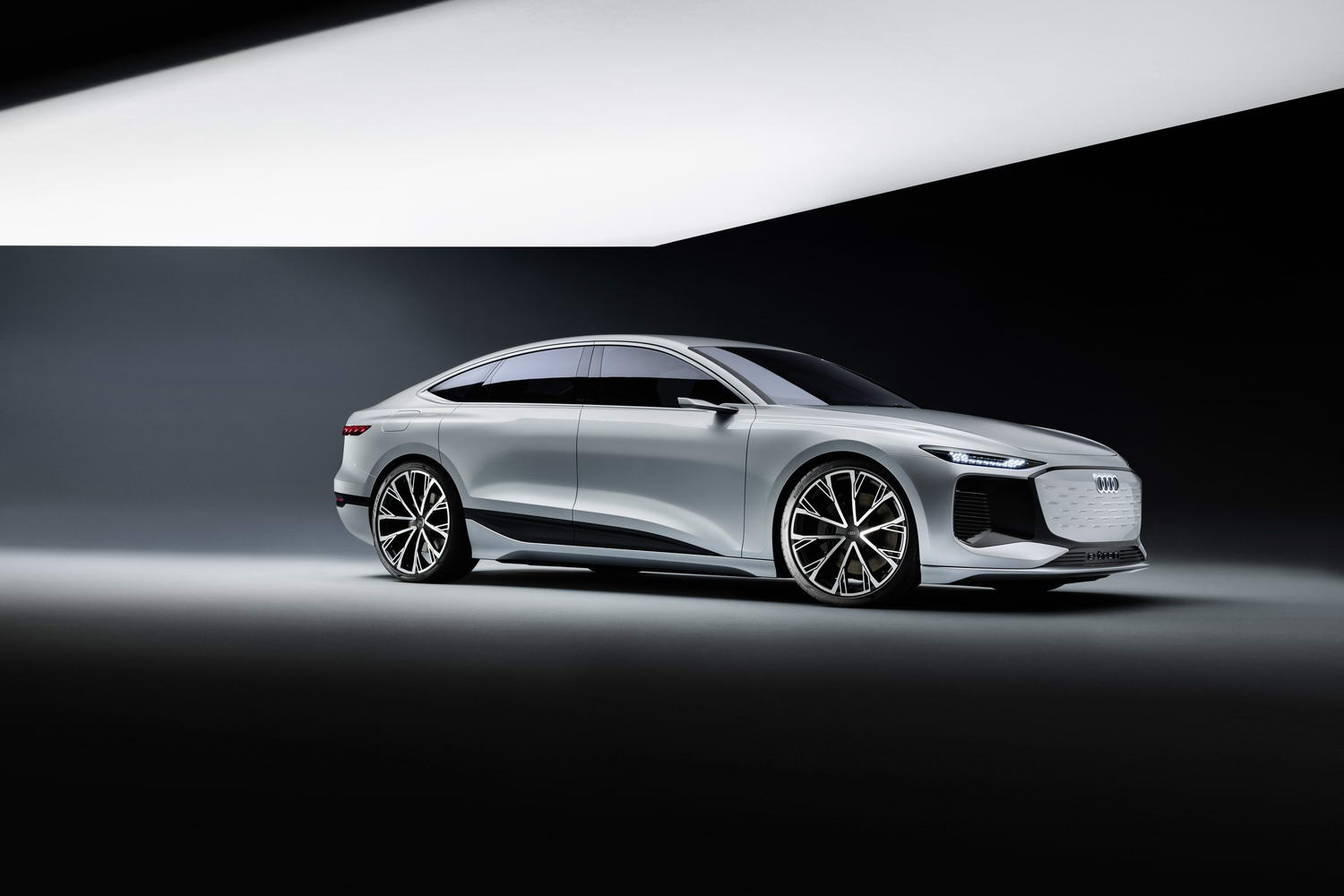 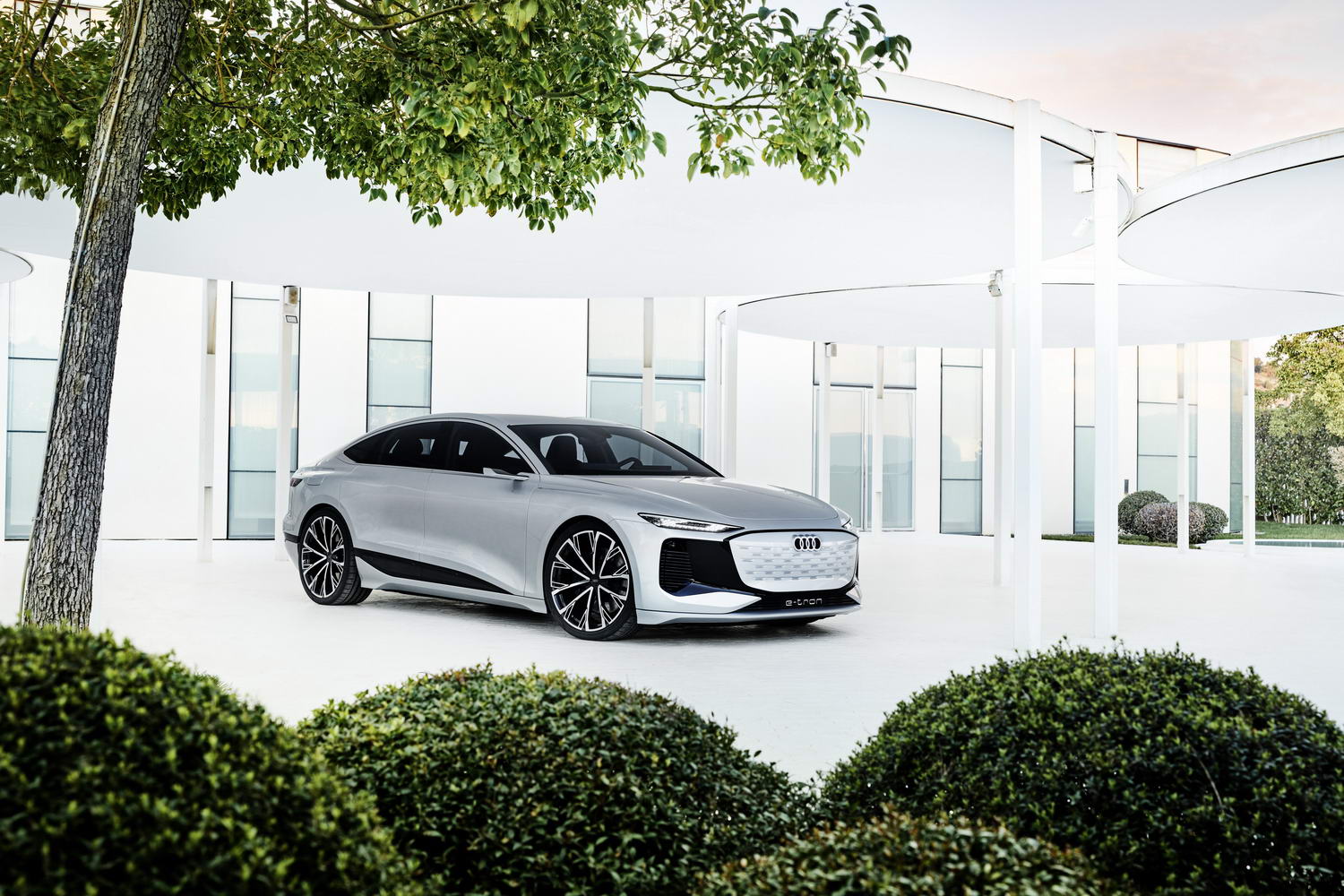 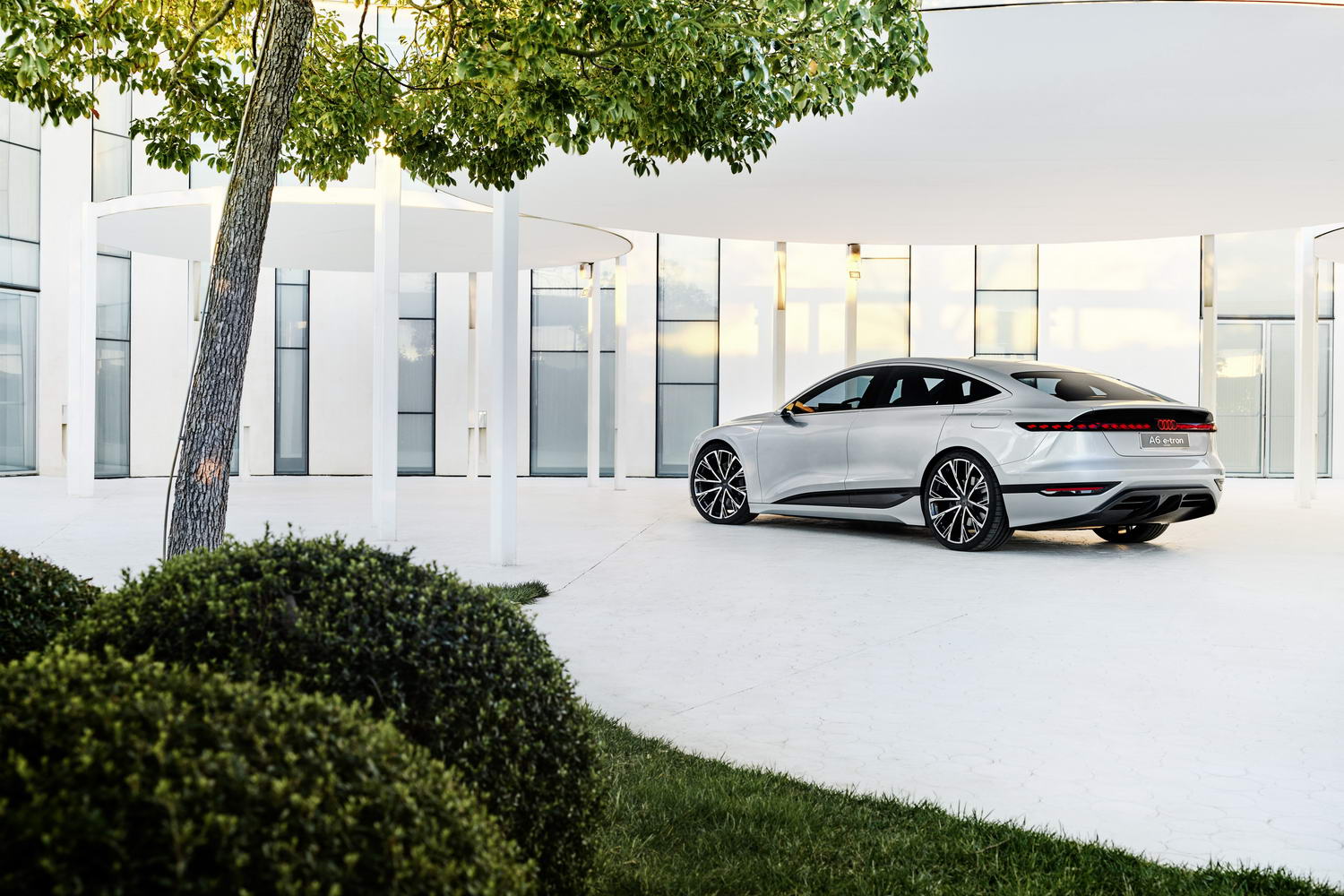 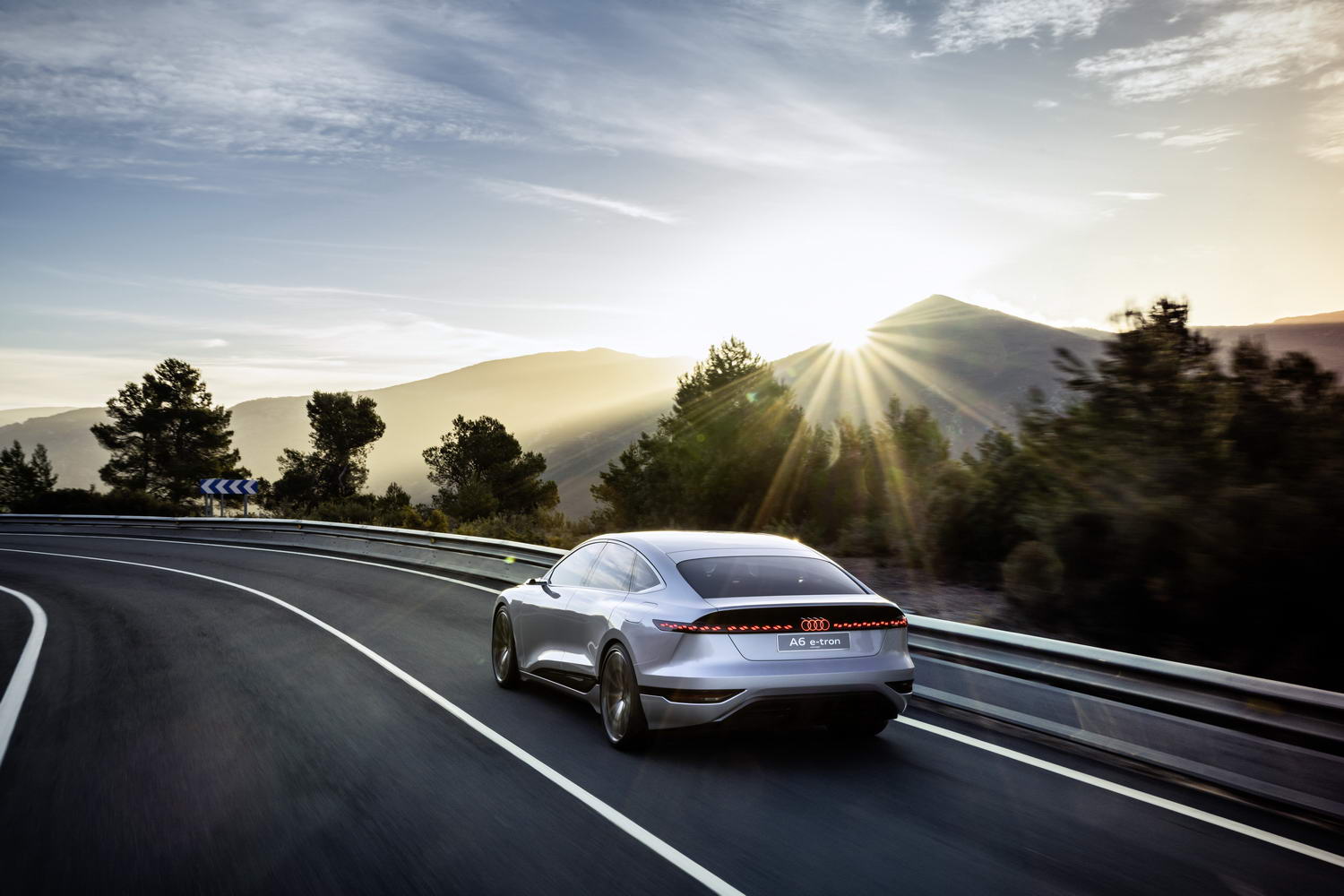 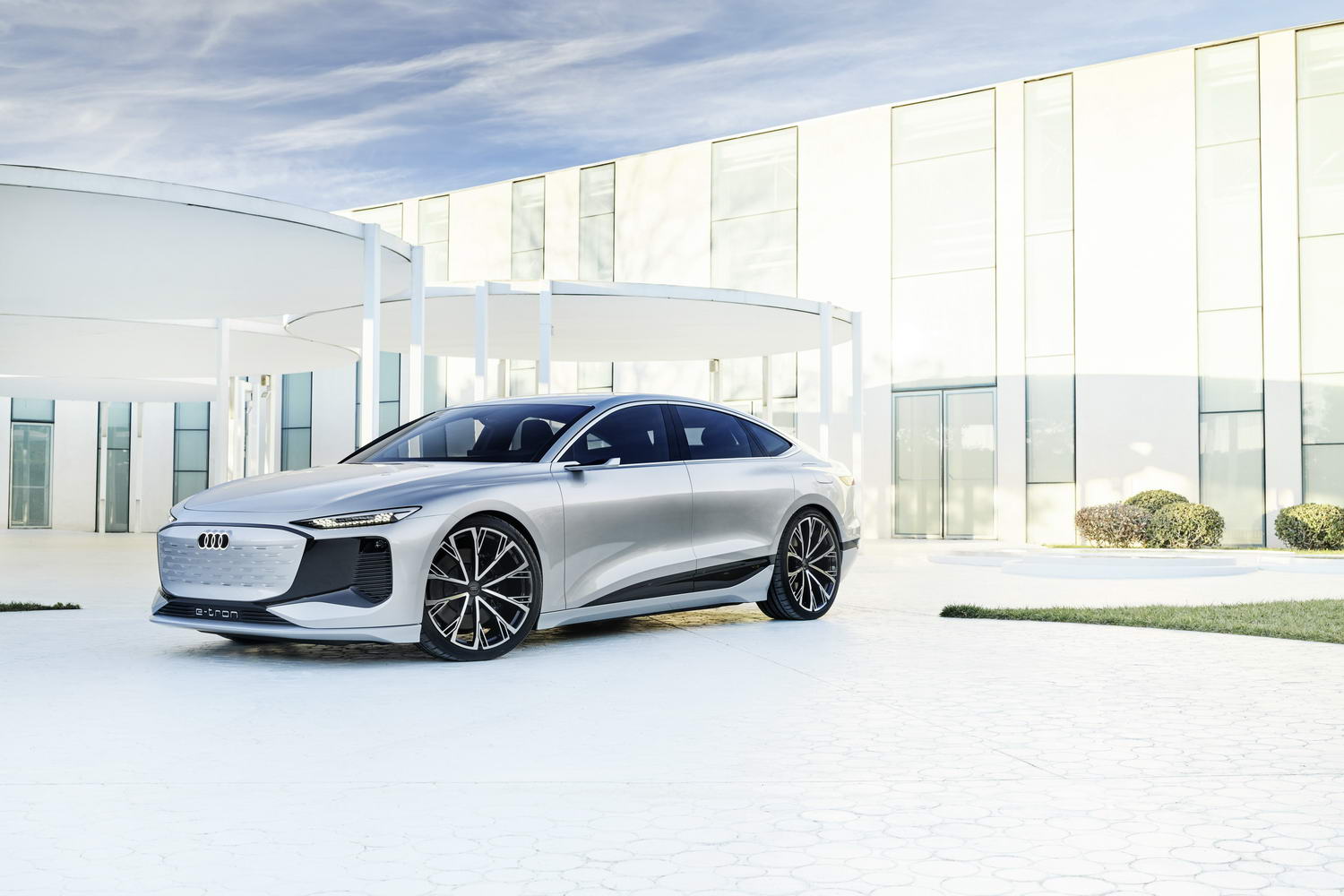 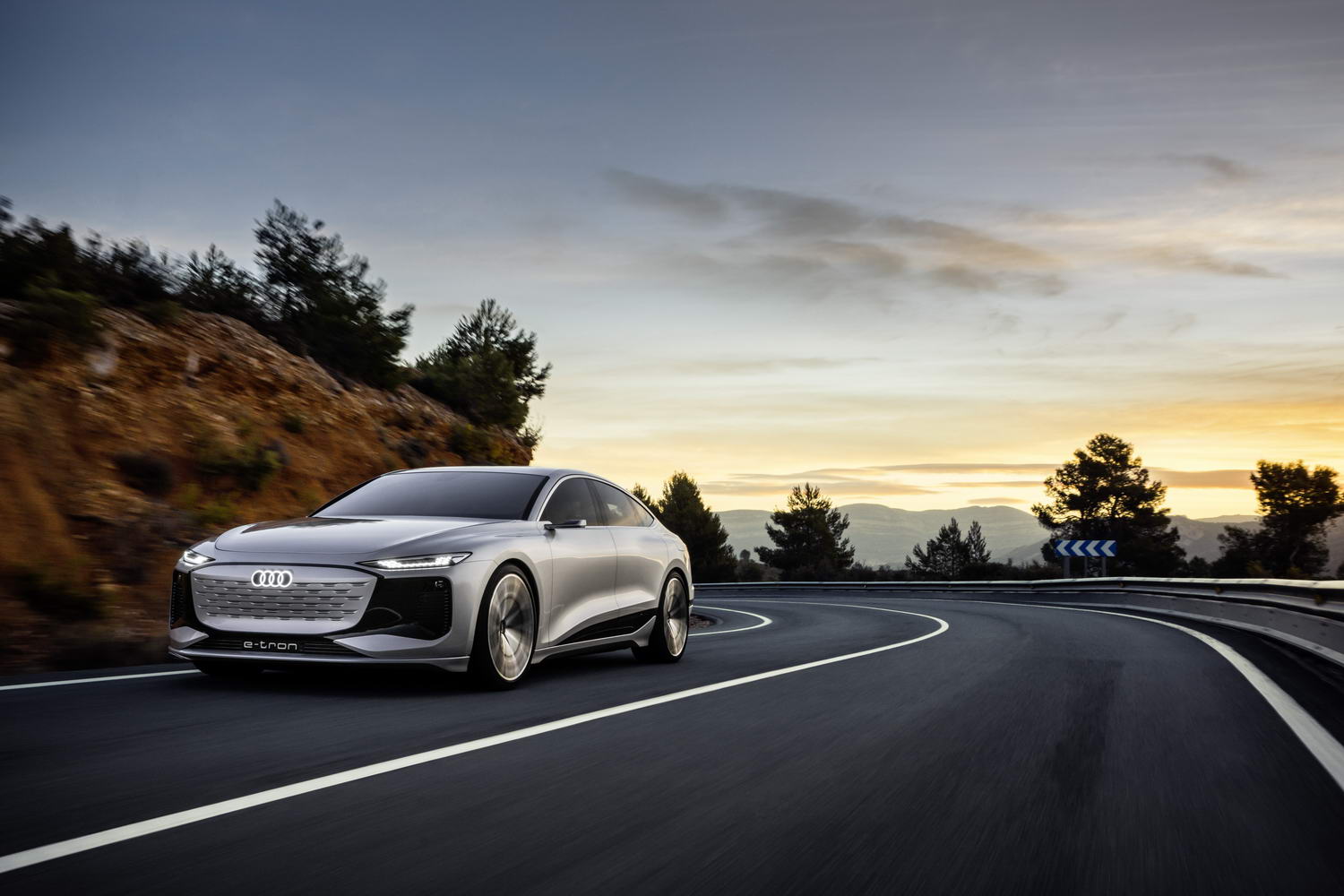 Hot on the heels of the production-ready Audi Q4 e-tron is this gorgeous electric design study, the Audi A6 e-tron concept. Not only does it preview how the next generation of large Audis will look, but it is also underpinned by a new electric platform designed specifically for bigger models.

Sportback styling for future Audi A6

We'll get to that in a moment, but it's worth taking the time to pore over the style of the A6 e-tron, as there's a lot to like. Despite the A6 name, Audi wanted to give its show car a sporting look more in line with the A7 Sportback, and the result is a handsome four-door machine.

In terms of exterior dimensions, the A6 e-tron is remarkably similar in size to the current Audi A6 and A7, though the concept's wheelbase is longer, and the overhangs are shorter. Audi tells us to expect these proportions to make it through to production.

Enhancing the stance is a set of tasty five-spoke, 22-inch alloy wheels, while the side view is free from clutter thanks to cameras instead of door mirrors and no visible door handles. Nonetheless, the concept does get flared arches, with a hint of the current Audi RS 6 Avant in their muscularity. The side view also reveals an interesting black design element that breaks up the 'Heliosilver' paint and stylishly links in with another black section in the rear bumper.

Viewed from the rear, a significant diffuser can also be seen. It's part of a suite of aerodynamic measures to reduce the drag of the car through the air, while enhancing its stability at speed. Audi quotes a coefficient of drag of just 0.22.

The A6 e-tron's lights deserve special mention. Up front, they use Digital Matrix LED technology and can even project a high-resolution display onto a wall or screen in front of the car. To demonstrate this, Audi even came up with a smartphone game that can be played on the projected screen. Obviously, the lights can also maximise illumination of the road ahead without blinding other road users, and project various symbols and patterns on the road to enhance safety.

At the back, the sculpted lights use digital OLED tech, allowing customisable light signatures and start-up light shows in 3D. Meanwhile, indicators at each corner take the form of high-res LED projectors, with the ability to project signals onto the road. Three further LED projectors are integrated into each side sill, to display welcome messages to the passengers and warning messages to other road users, as needs be.

Arguably, the most important aspect of the A6 e-tron is hidden from view. It's built on what Audi calls the new Premium Platform Electric (and yes, the acronym is indeed PPE...), which is set to underpin Audi's larger electric cars (and Porsche's) from late 2022. We believe that the first showroom-ready model to feature the PPE will be the Audi Q6 e-tron SUV, though the German company assures us that the platform is designed to be flexible and allow creation of cars with quite different levels of ground clearance. It will form the basis of an A6 e-tron in 2023.

The concept's battery pack is said to hold about 100kWh of energy, fuelling an electric motor on each axle. Maximum outputs are quoted as 350kW (476hp) and 800Nm of torque.

Audi says that the most powerful versions of the A6 e-tron will do 0-100km/h in less than four seconds, while the most efficient models, using just one rear-mounted electric motor, should surpass 700 kilometres on a charge.

Speaking of which, like the existing Audi e-tron GT, cars built on the PPE will use an 800-volt architecture, allowing rapid charging at up to 270kW.

Along with the new Q6 e-tron and A6 e-tron, it is expected that the PPE will underpin cars from the class below (perhaps an A4 e-tron and most certainly a Q5 e-tron) and above, presumably in the shapes of the Q7/Q8 e-tron and maybe even an electric A8 e-tron.