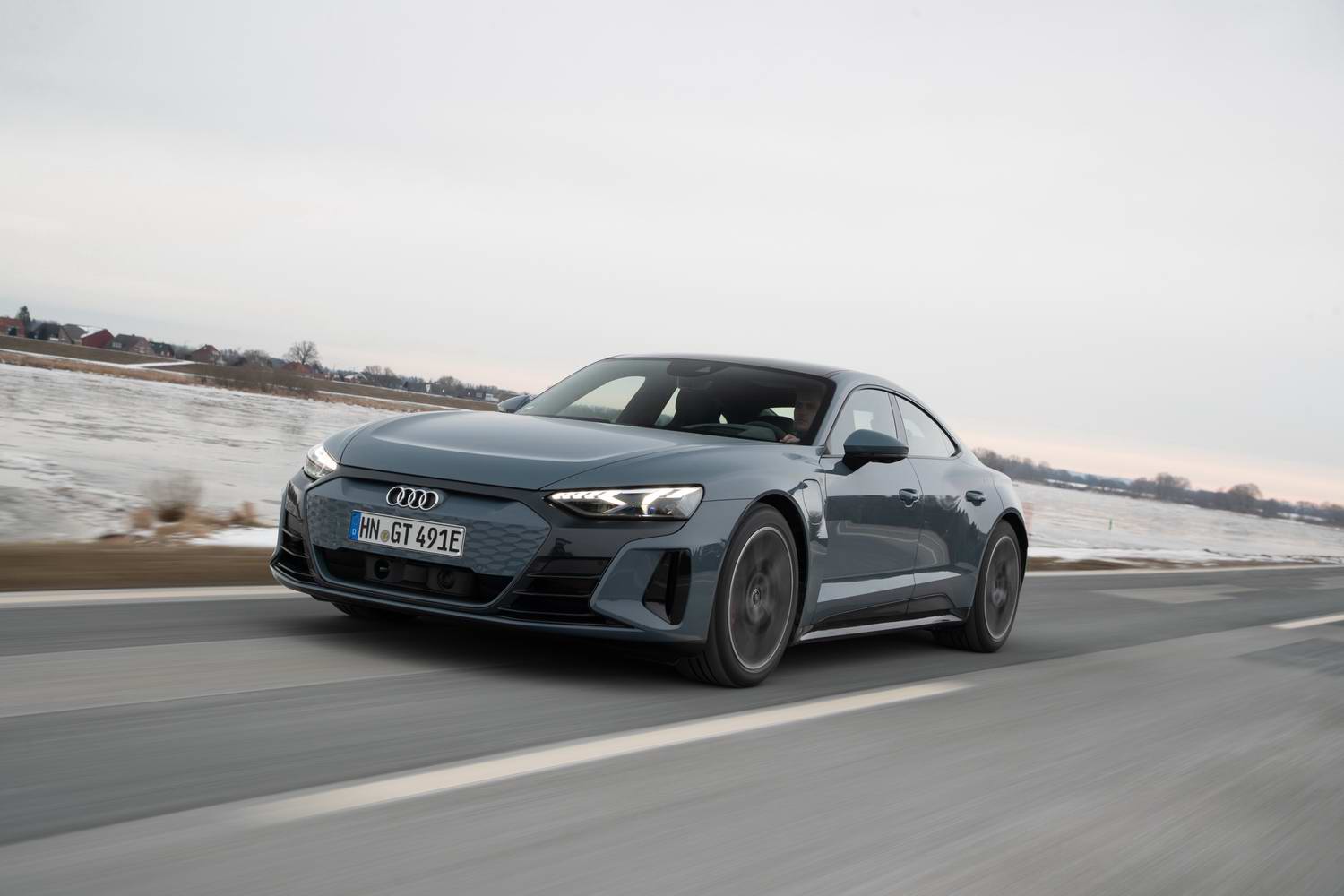 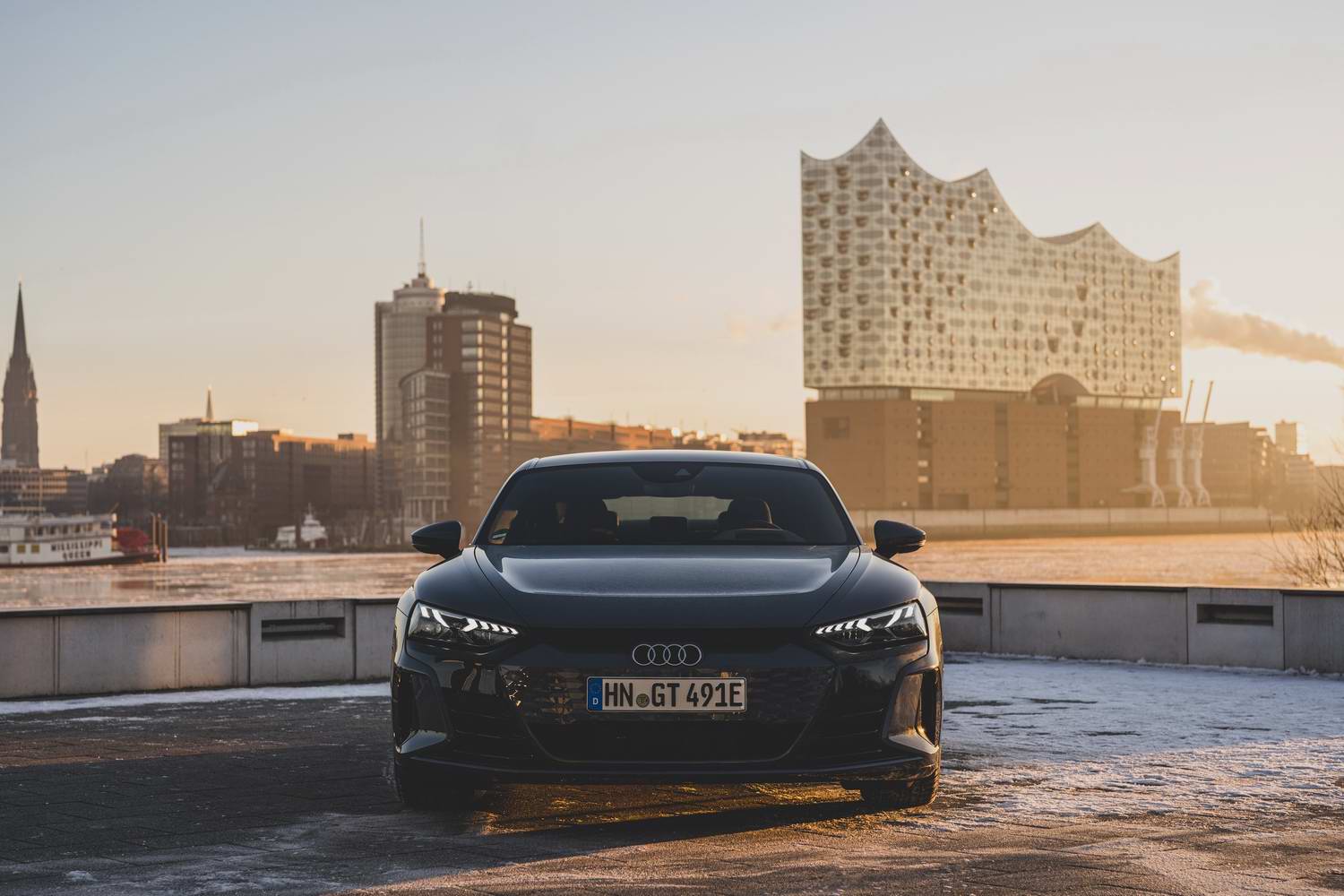 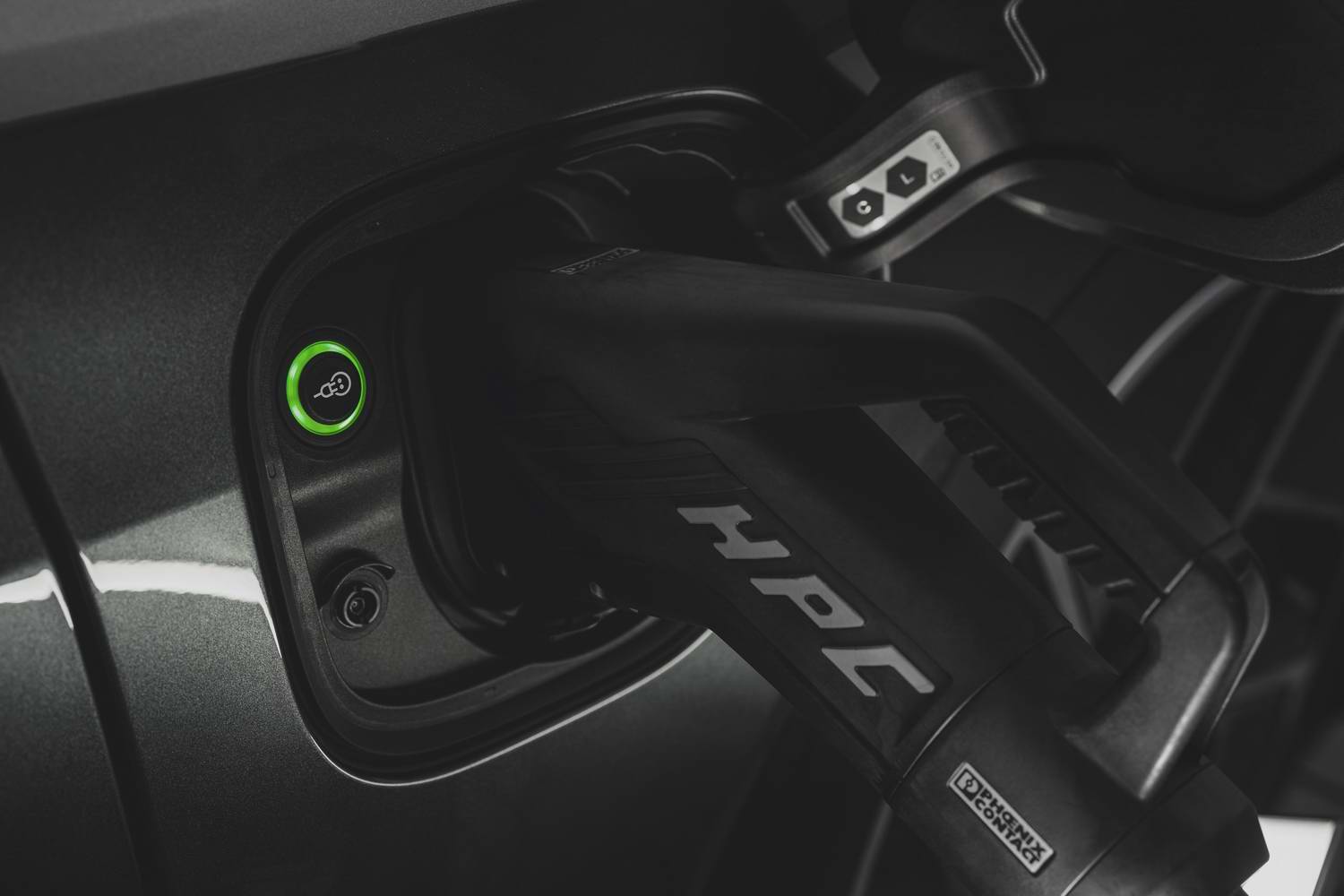 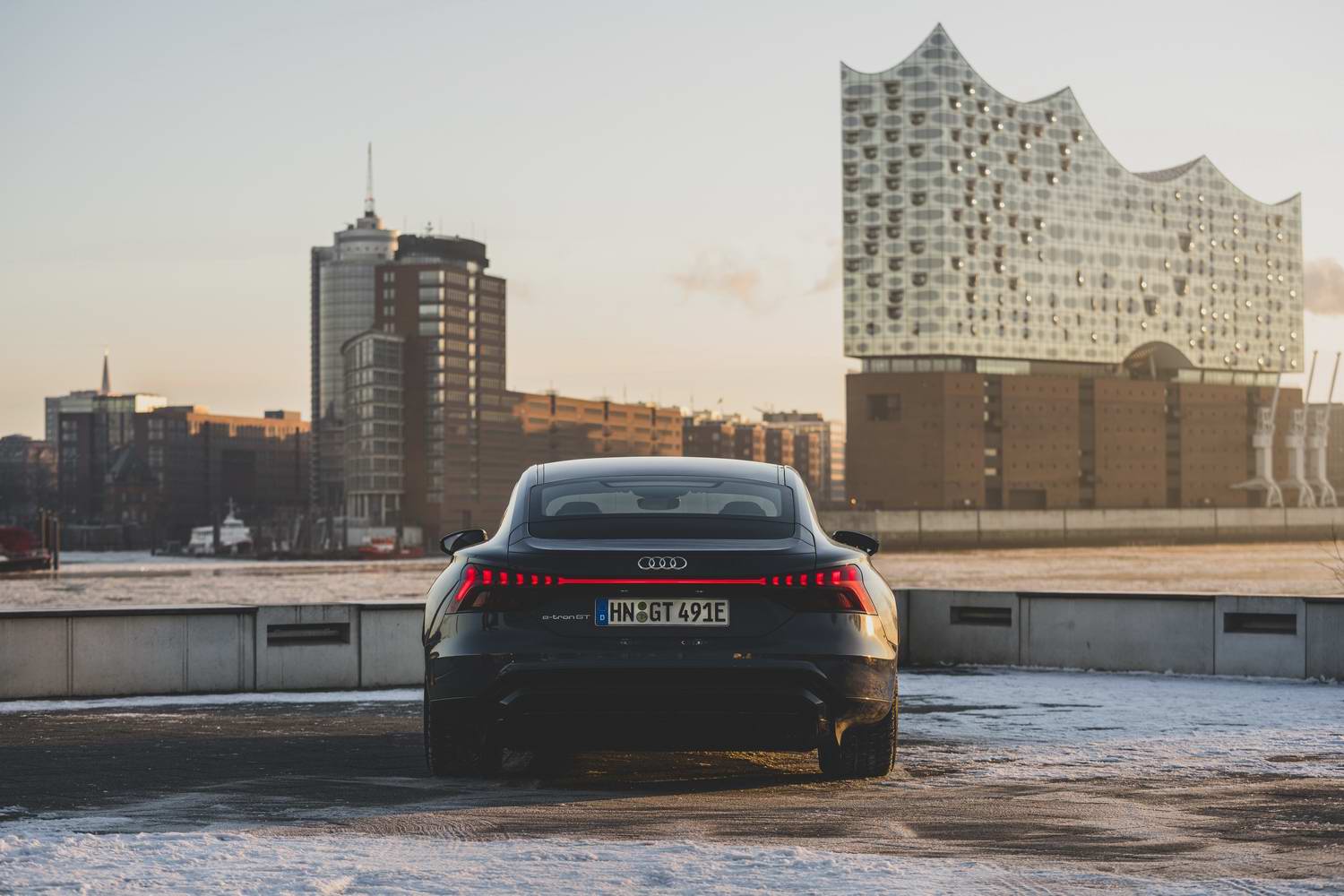 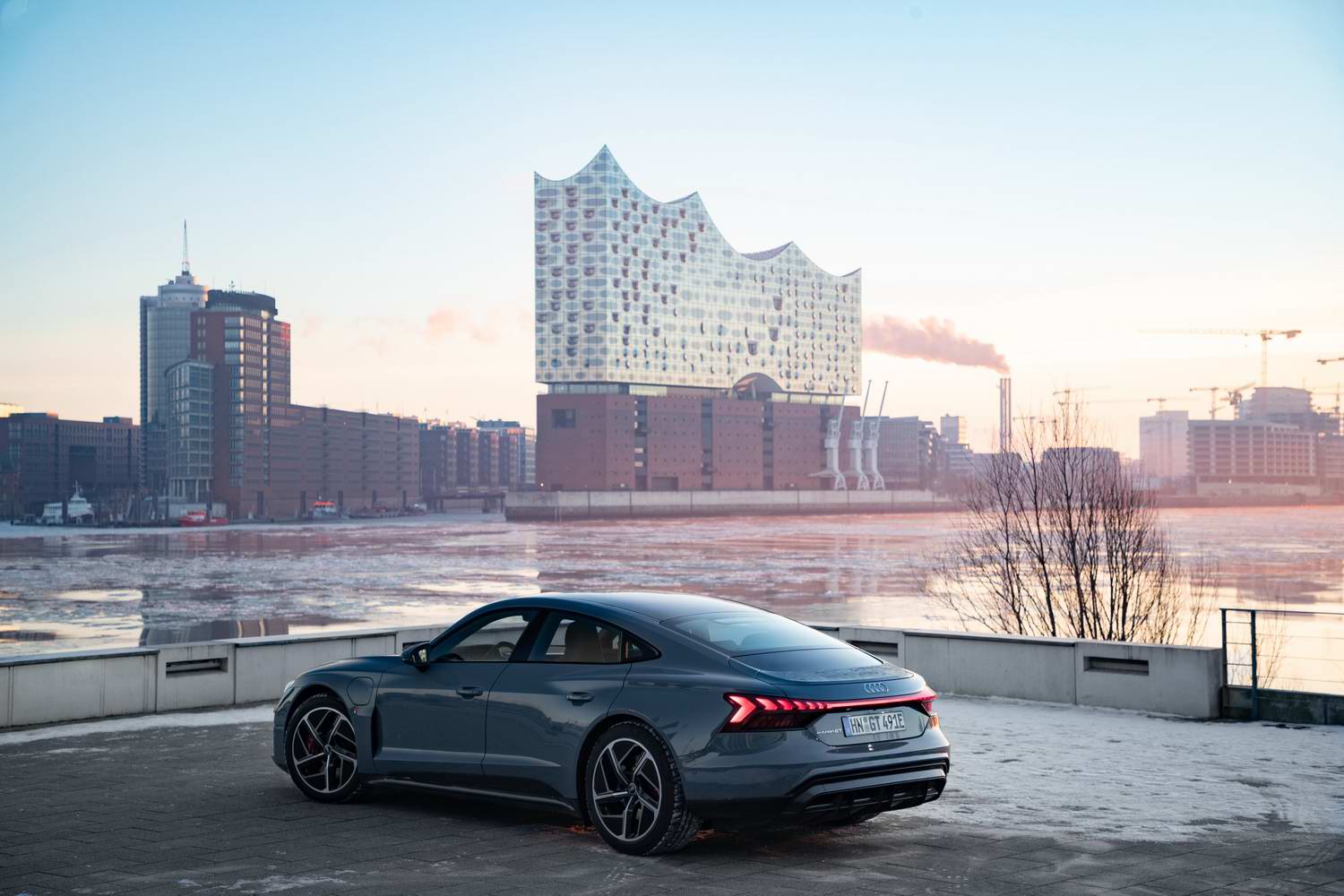 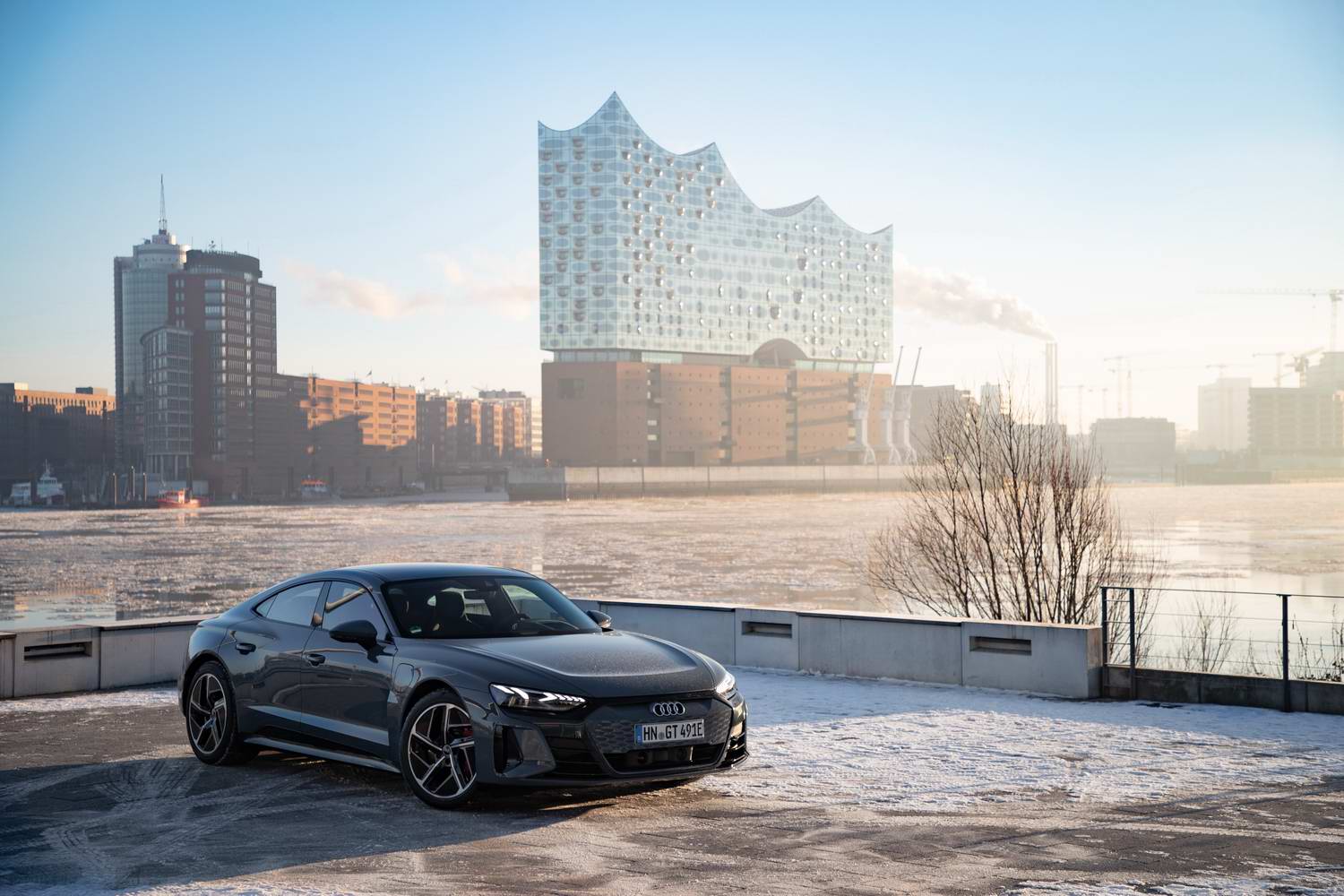 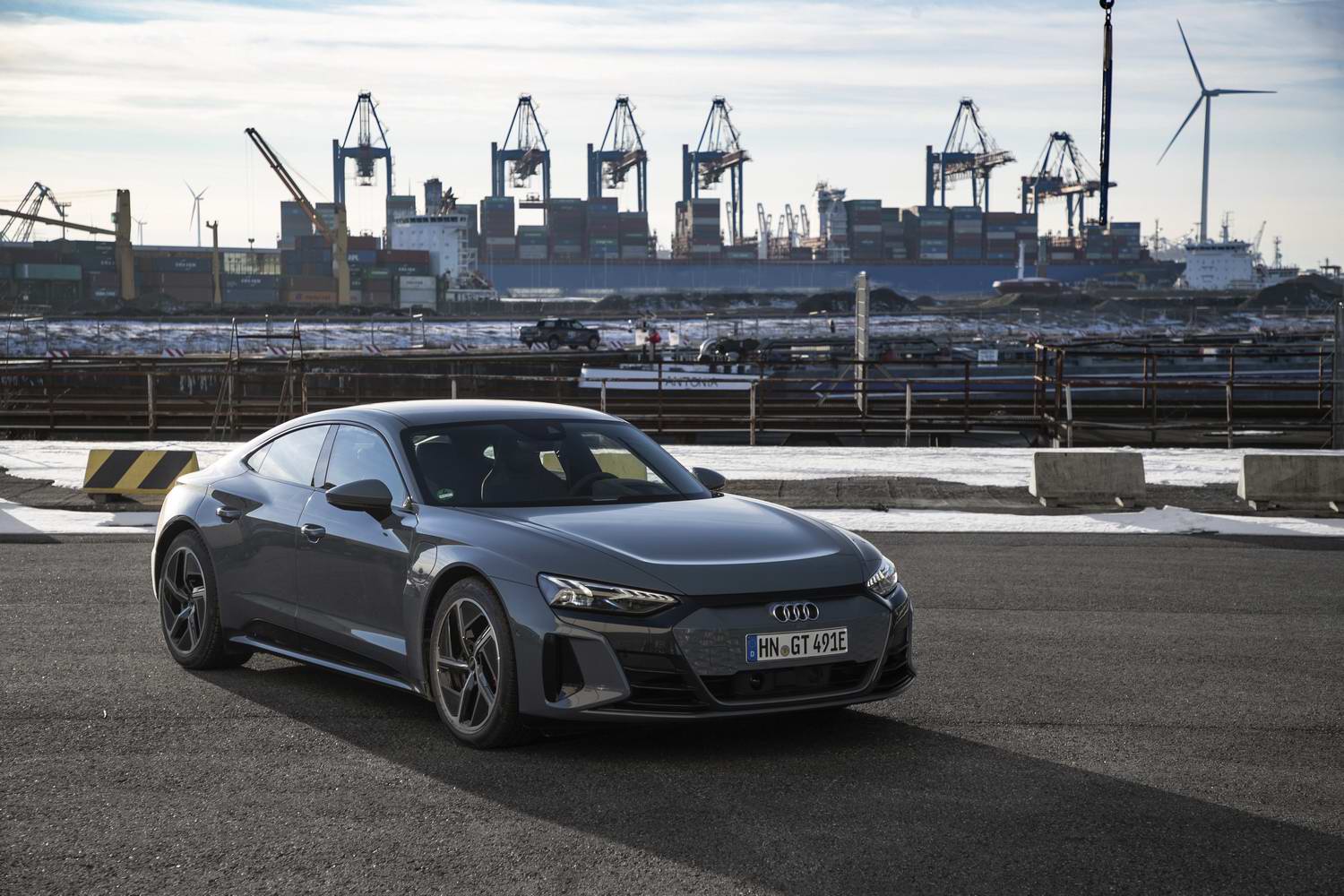 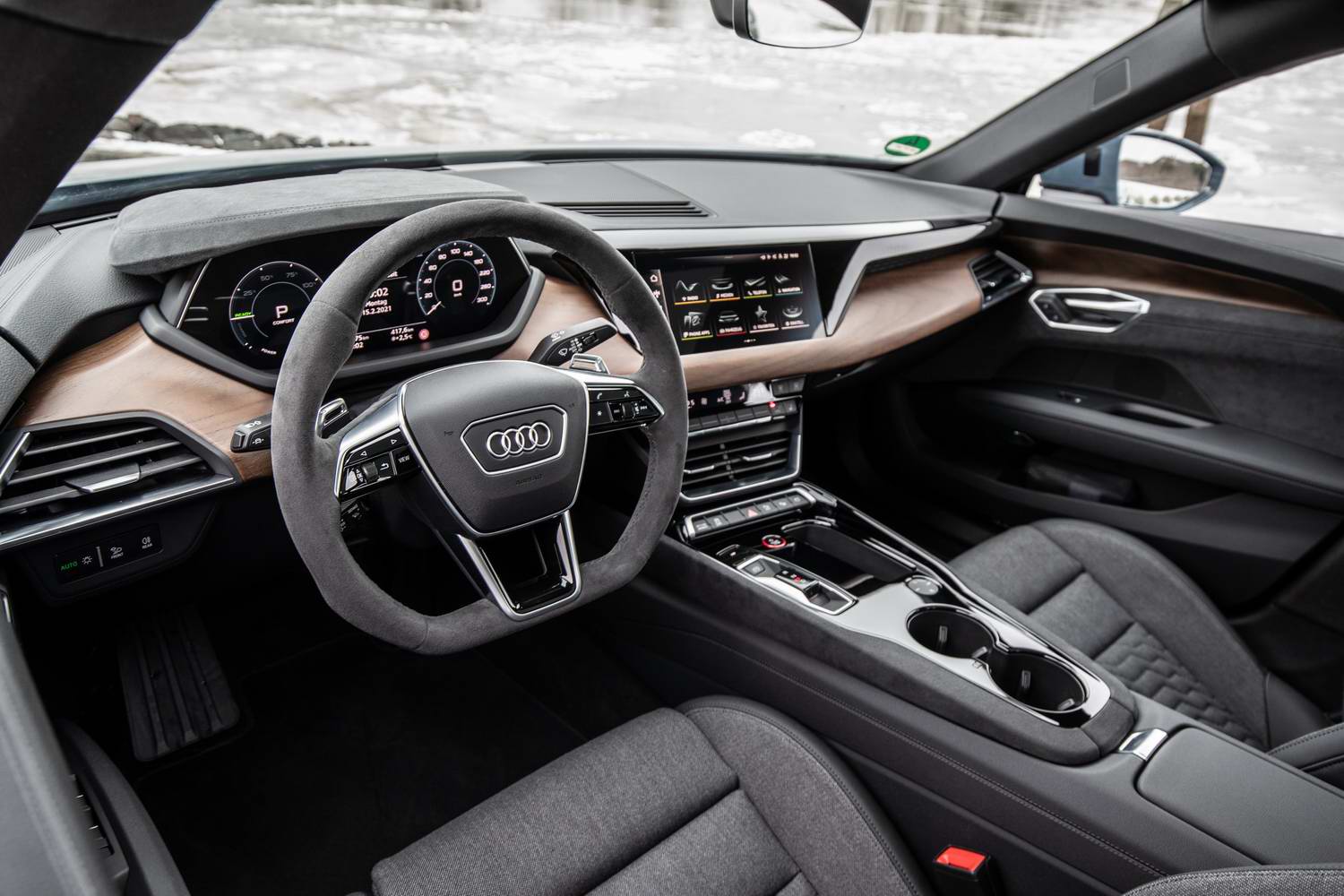 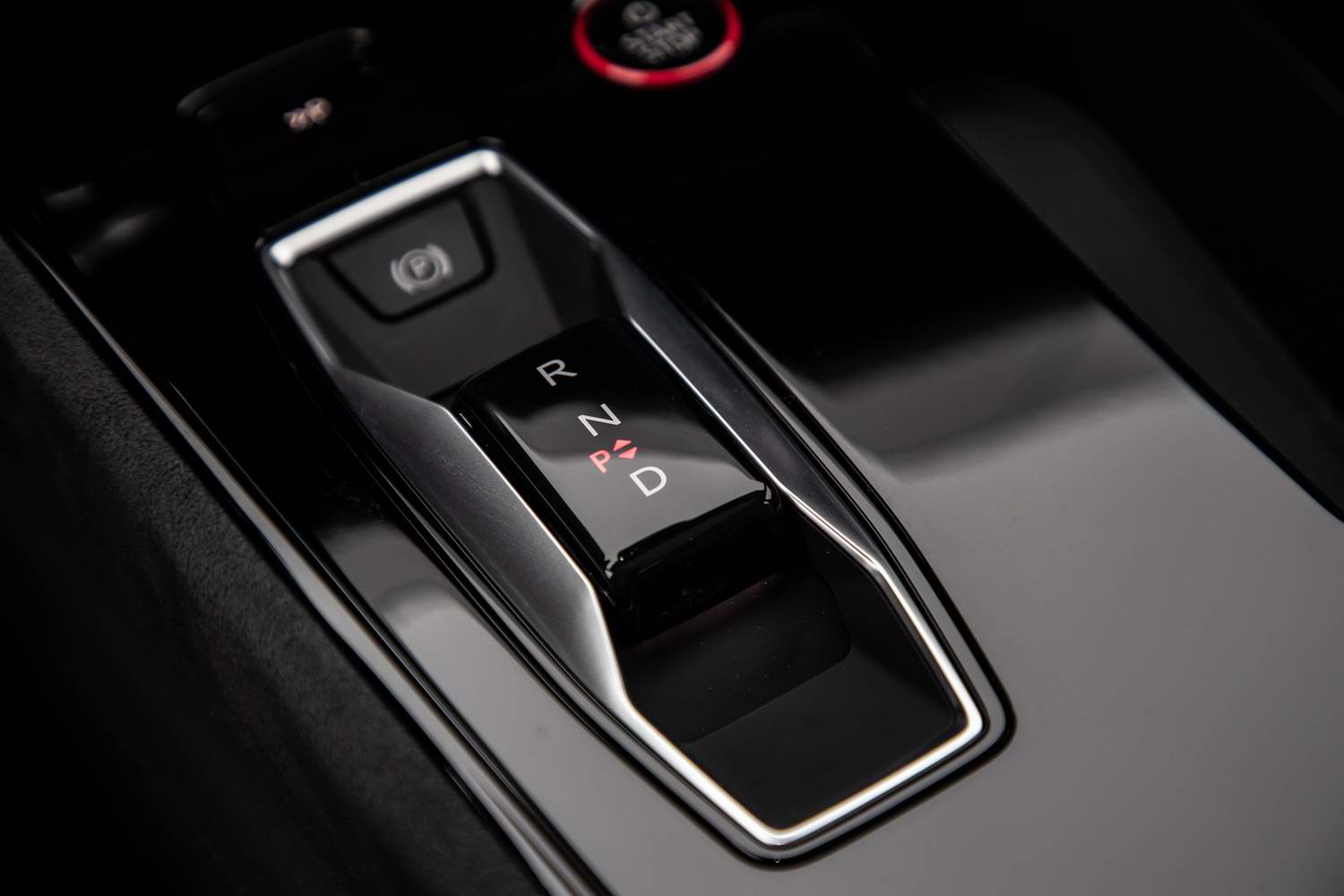 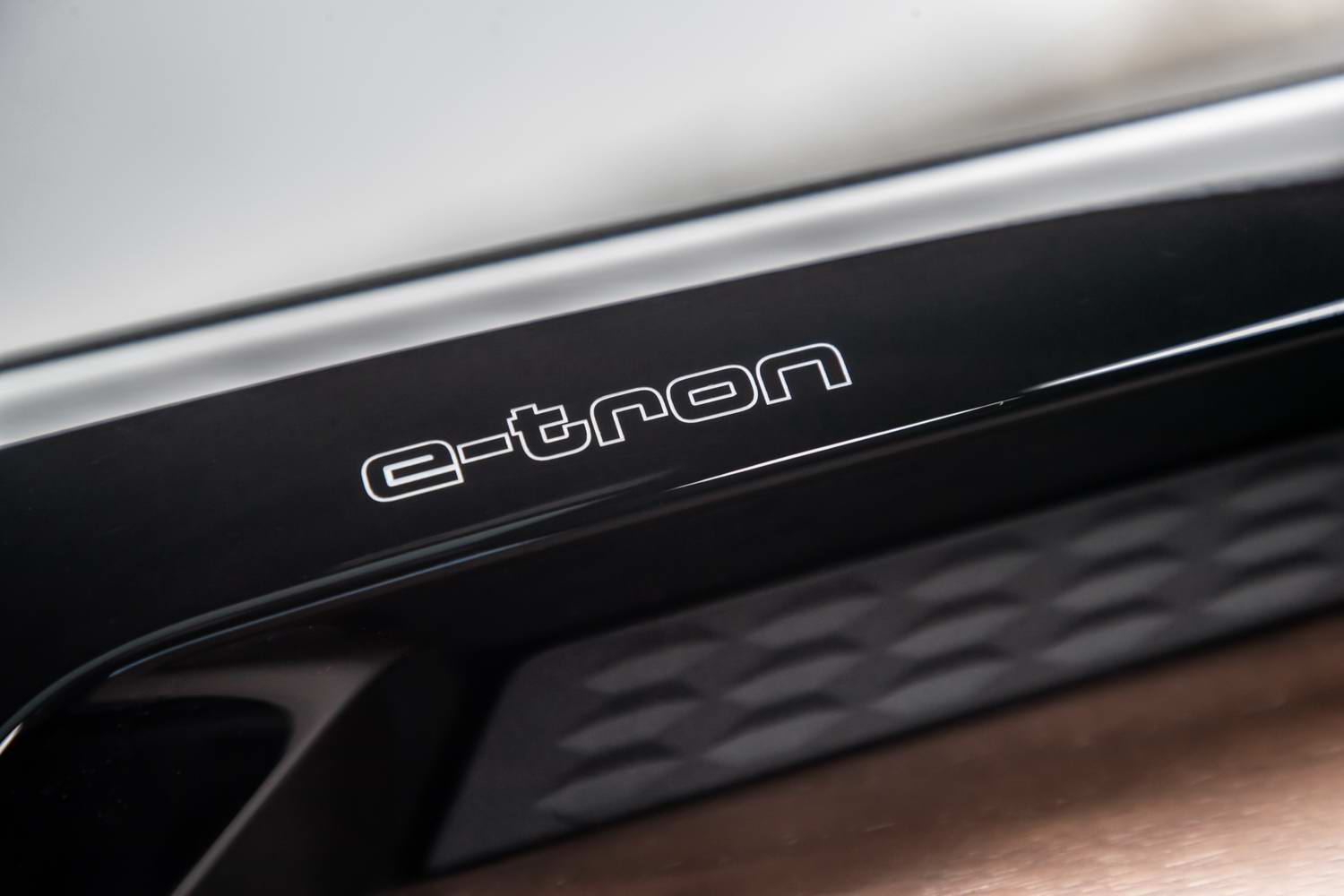 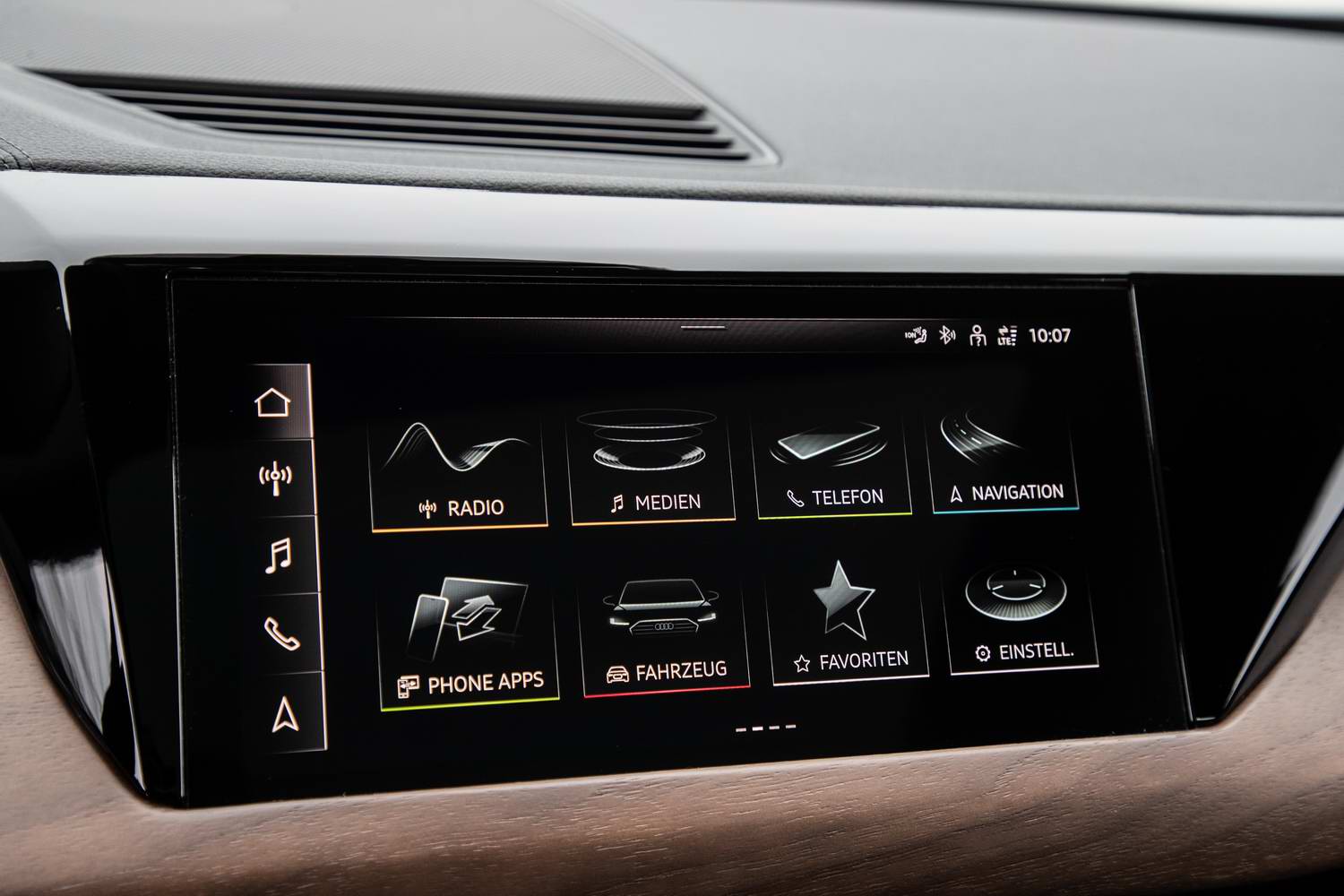 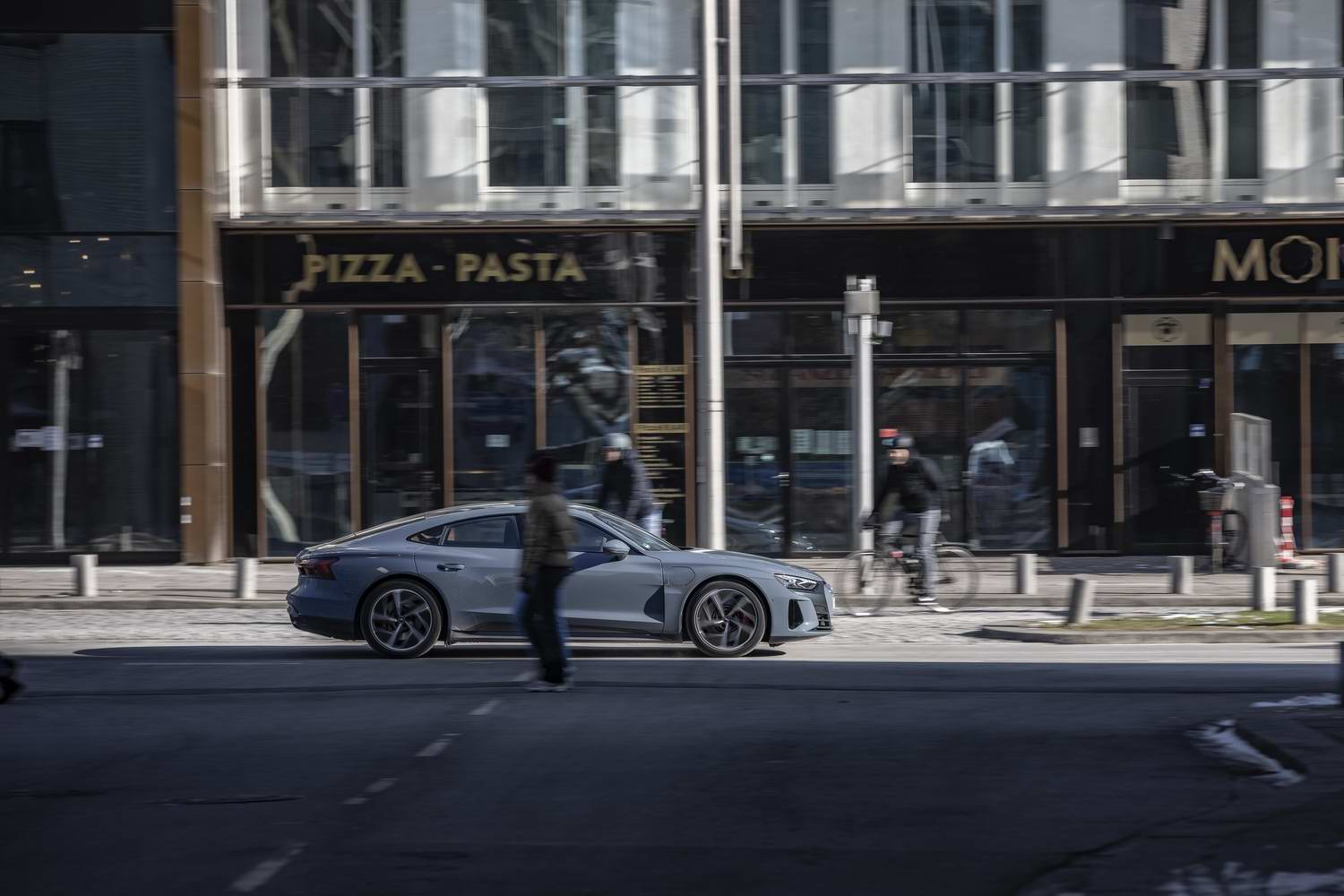 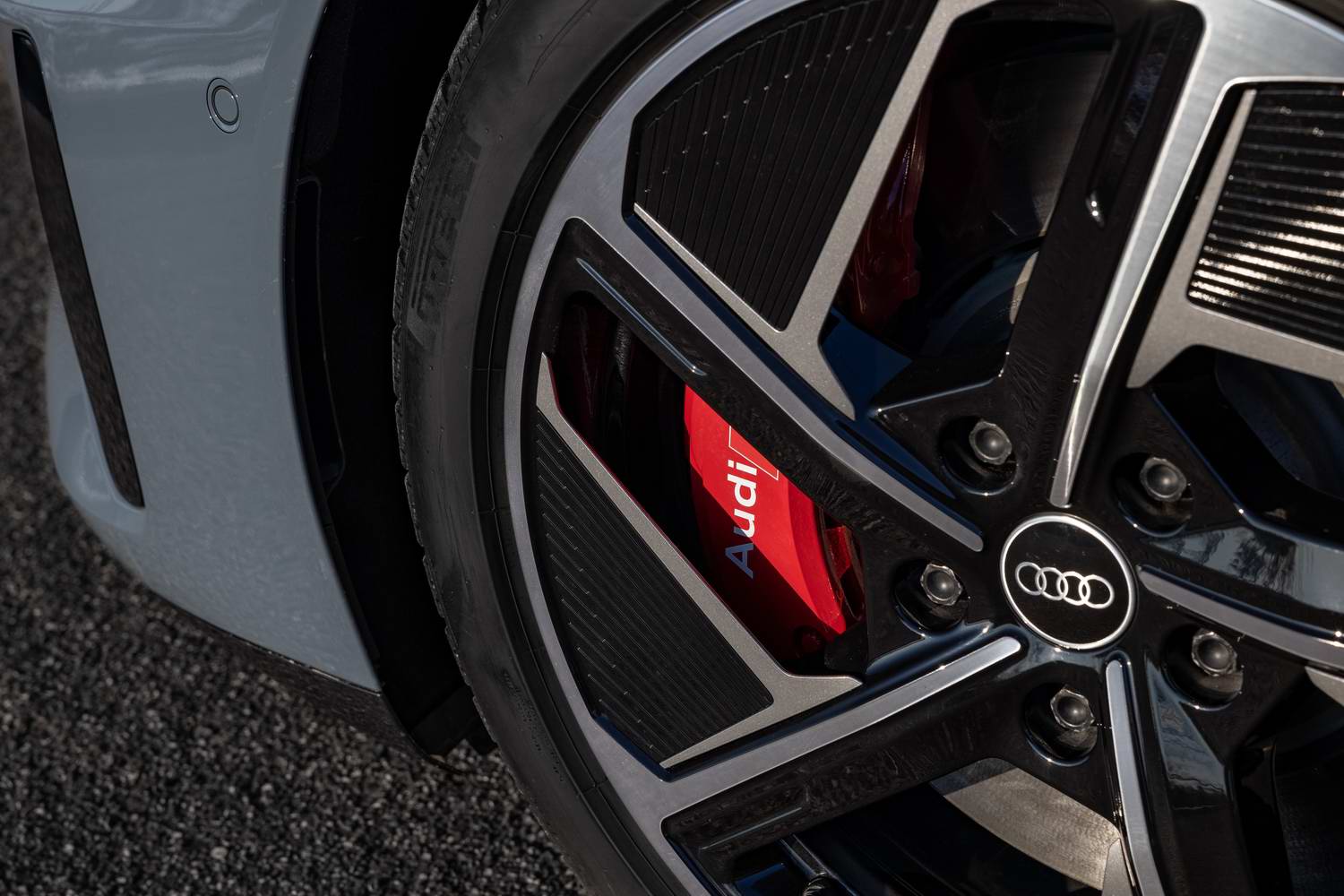 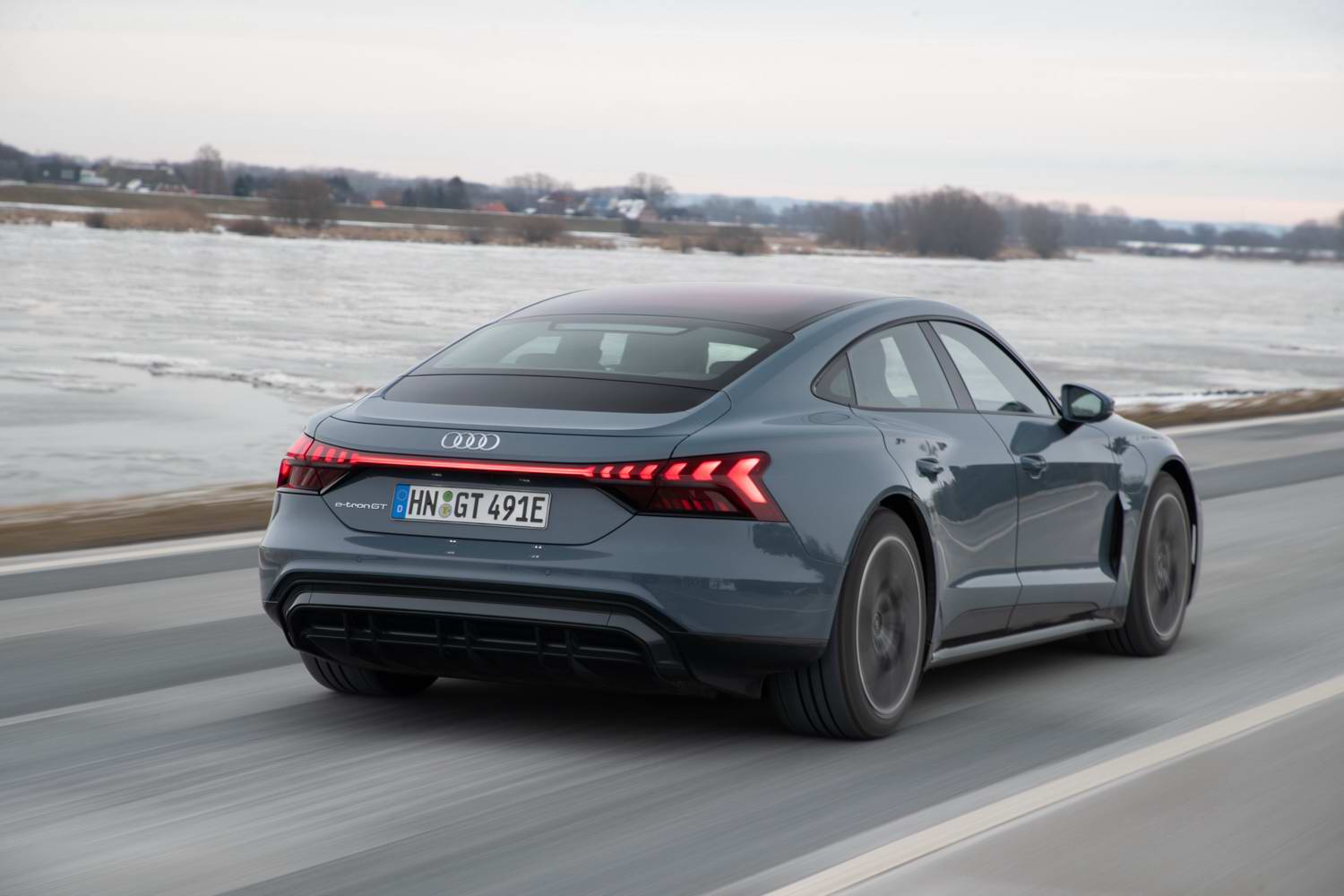 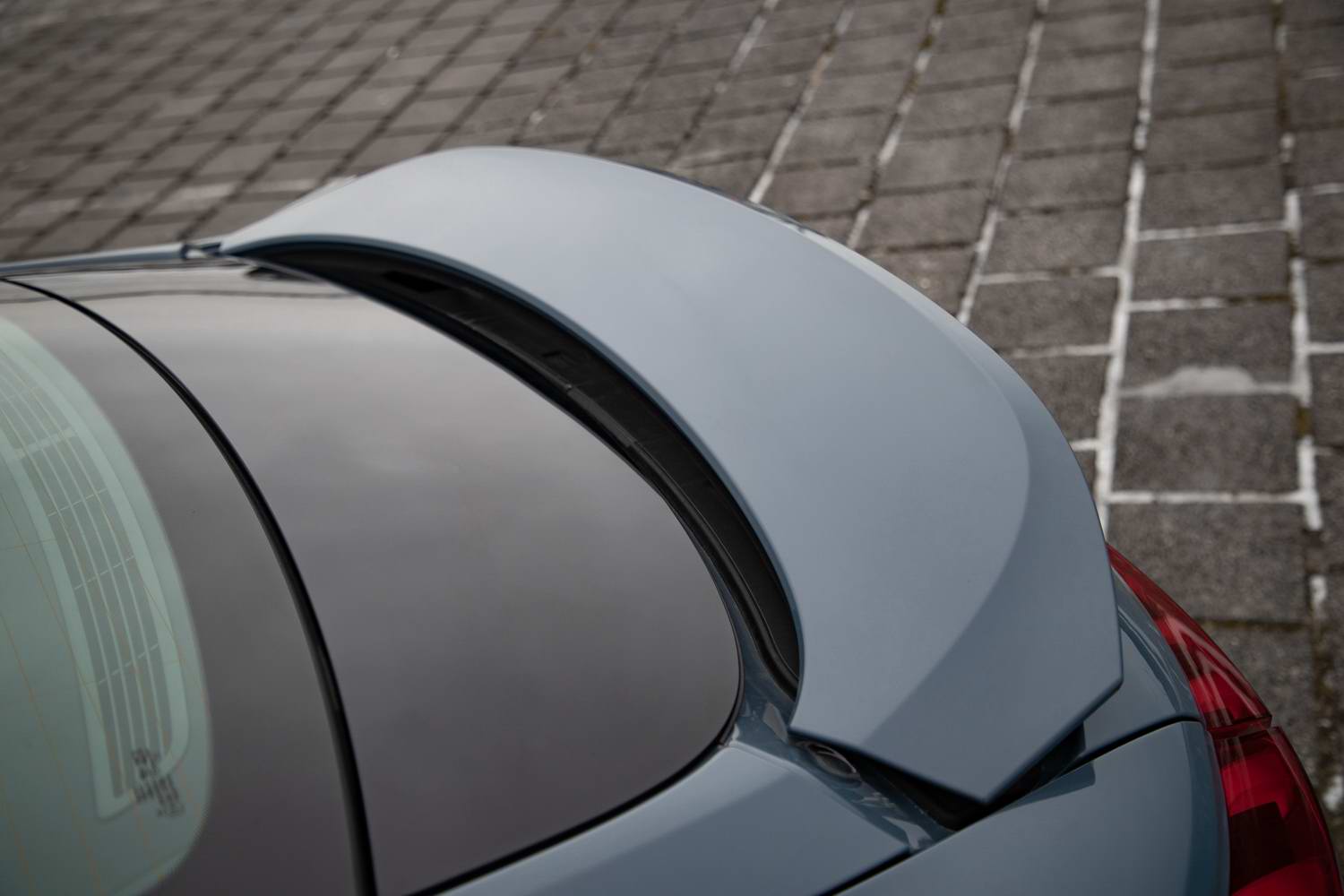 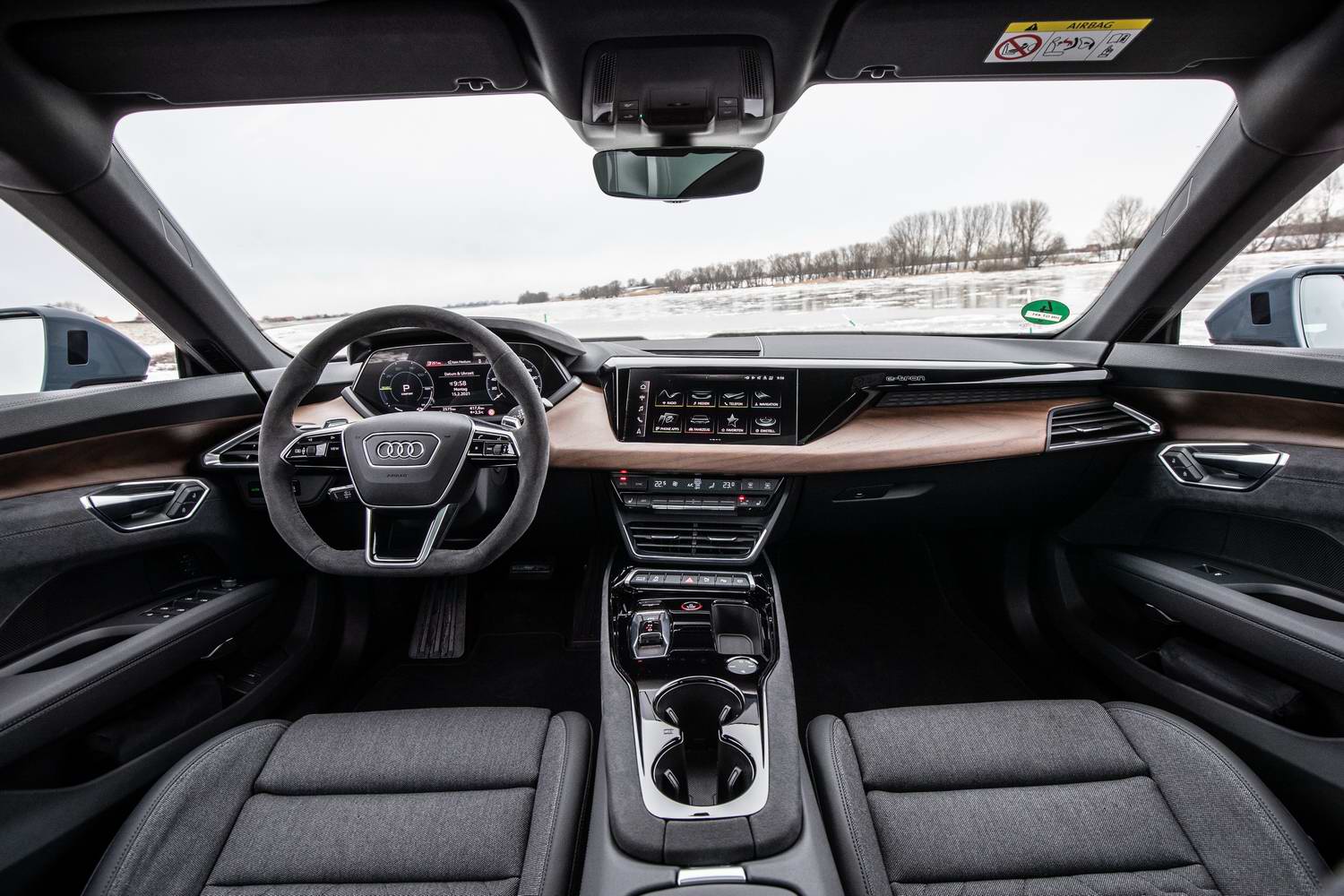 The range-topping Audi e-tron GT has arrived in Ireland. The e-tron name now means all-electric in the Audi line-up, but that's about all this new four-door sportscar has in common with its similarly badged SUV siblings. Some will compare the e-tron GT to the likes of the Tesla Model S, but in reality, it's entirely different, with a notably sporting bent. That's because it shares more than a little with the Porsche Taycan. Is the Audi perhaps better equipped for sales on the Irish market?

Depending on its exterior colour, the Audi e-tron GT isn't as attention grabbing as you might first expect. That's down to the adoption of Audi's existing design language, so there's nothing alien about the shape. Nonetheless, it looks special, with more than a hint of the Audi R8 in its stance. We particularly like the rear view, where the GT's width is emphasised by an LED light bar joining detailed rear lamps.

In terms of size, the e-tron GT is 20mm longer than the current Audi A7 Sportback (though 20mm shorter in the wheelbase), and it's a considerable 60mm wider, while it's only a little lower overall.

I'm not a huge fan of the design of the standard 19-inch alloy wheels fitted, but most buyers are likely to upgrade to a 20-inch rim anyway. Meanwhile, a lovely panoramic glass roof is standard.

Under the electrically lifted rear hatch there's a useful 405-litre boot, with a small cubby under it that should take a charging cable. The total luggage capacity is augmented by a further space under the bonnet up front, which holds 81 litres. The rear seat backs splits and folds down, too, to allow for carrying longer loads.

As in the Porsche Taycan , the e-tron GT's battery, which is located under the car's floor between the wheels, has been shaped to allow for more rear foot room. The outer two seats are pleasantly spacious in all directions, easily accommodating adults. There is a seat belt for the centre, too, though the shape of the base makes it clear that this is for occasional use only.

Up front, the e-tron GT's cabin is perhaps a little too like the rest of the Audi range. It does get a few unique bits and pieces, and the shape of the dashboard is not found elsewhere in the line-up, but in my opinion, you'll need to spend a little on customisation to make it come to life. Synthetic leather upholstery is standard, and the subtle looking sports seats are more than adequate, but there are even lovelier options to upgrade to. The new steering wheel is a joy to hold, though, thin of rim and smaller in diameter than most Audi wheels.

Although the e-tron GT looks low-slung, it's not difficult to get in and out. Once in, there's plenty of adjustment in the driver's seat and steering wheel and all the controls fall easily to hand. Other than a drive selector specific to the e-tron GT in the centre console, there's nothing in the cabin to alienate people coming from other Audi models.

Push the brake pedal and pull back on that selector to move into D and away you go, just like any other automatic car. In its default Comfort setting, there's a whisper of synthesised 'engine' sound, but it's mostly just quiet. Wind roar and tyre noise are well suppressed, too.

While all e-tron GTs get adaptive damping as standard, our test car also featured the optional air suspension. In this guise, it turned out to be truly exceptional to drive. In Comfort mode, it lives up to the title, allowing for long journeys to be taken comfortably. Small imperfections in the road surface are absorbed without your knowledge and the suspension handles the bigger stuff, too.

Select the Dynamic driving mode and things firm up noticeably, though the e-tron GT is never uncomfortably rigid on the road. In this setting, speedbumps and larger potholes are felt more, but the upshot is rock solid body control. Whether you're carving up a tight and twisty mountain road or maintaining decent progress on a fast and sweeping one, the e-tron GT feels tied down, stable and responsive.

That lovely steering wheel is connected to a communicative steering system, allowing accurate placing of the front of the car. And there's no slop in its responses, either. It's direct, too, without ever feeling nervous at higher speeds.

And higher speeds are all too easy to attain in the e-tron GT. There is effortless performance on tap at all times and while the 4.1-second 0-100km/h time is backed up by a proper shove in the back away from a standstill, it's perhaps the way this car accrues speed on a partly pushed down accelerator that sticks in the mind. The excellent chassis allows for all that performance to be used, too. Big brakes are assisted by regenerative braking, and the pedal feels well-modulated at all times.

The peak power and torque figures quoted above are available during limited 2.5-second windows, but away from that, there's still an incredible 476hp and 620Nm of torque available. And yes, the e-tron GT is a heavy car, but those outputs make light work of it. You really don't need the extra oomph of the RS model.

All versions of the e-tron GT so far revealed have a motor on each axle for four-wheel drive. What's more, the system has the ability to 'torque vector' to assist with accelerating out of corners. Keep your foot down on the exit of a tight, well-sighted corner and you can actively feel it altering the level of torque to the front and back wheels.

In the Dynamic mode it favours the rear axle more, making for a deliciously rear-lead sensation. It's adjustable on the limit, too, making it more engaging than you might expect it to, given the layout.

Incidentally, the fake noise ramps up in the Dynamic setting, too, though it can be adjusted through three levels within the Individual mode.

There are two different versions of the Audi e-tron GT. The entry-level model tested here costs from €102,397, which does not take into account a VRT rebate or SEAI grant. These are expected to be discontinued for electric cars that cost over €60,000 from July this year and Audi Ireland confirms that Irish buyers won't be taking delivery until after that.

The RS e-tron GT costs from €140,367 and it adds a styling package, adaptive air suspension, ambient lighting, a reversing camera and more. On top of the extra equipment, it gets a more powerful rear motor, bringing the maximum outputs (during 'boost') to 646hp and 830Nm of torque.

As a halo car for the rapidly expanding Audi e-tron range, the new GT ticks all the boxes. It looks great, without being outlandish or garish, it's more practical than you'd expect given the slinky exterior and its large battery and fast-charging capability will make the transition from internal combustion engines to electric easier. However, what stands out, even amongst all that, is the driving experience. The e-tron GT can, depending on options, play the role of long-distance cruiser one minute and seriously engaging sports car the next. It's a truly special creation.

Jaguar I-Pace EV400 review
Jaguar I-Pace vs. Audi e-tron GT quattro (2021): yes, we know that the I-Pace is marketed as an SUV, but it is brilliant to drive and has a similar level of performance to the Audi. The Jaguar has more space inside, but the Audi is more special. 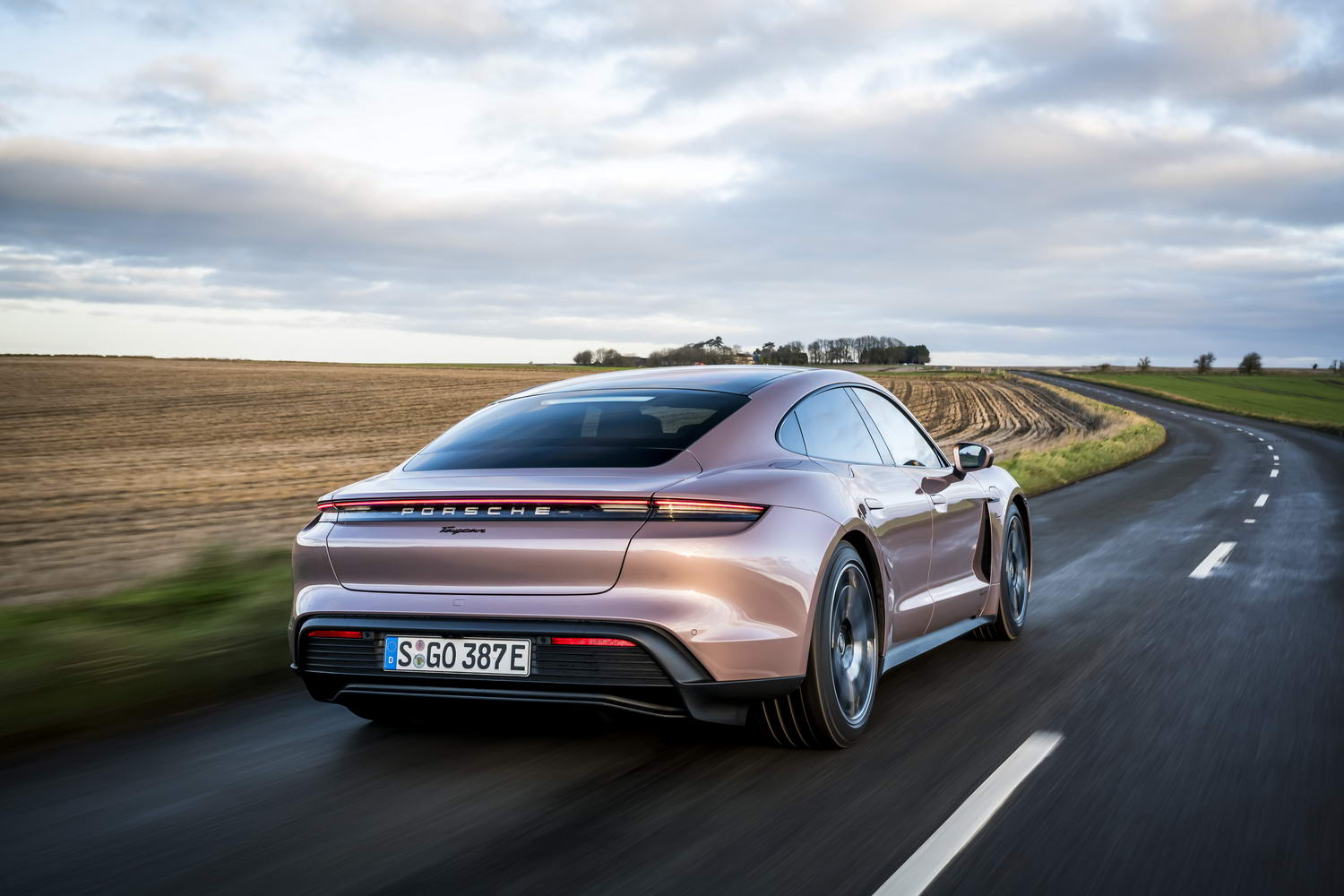 Porsche Taycan RWD (2021) review
Porsche Taycan vs. Audi e-tron GT quattro (2021): these cars share a lot of components and feel quite similar. The e-tron GT is closest to the Taycan 4S though the Audi appears to be better value. Still, much more choice in the Porsche line-up.

Tesla Model S 100D Long Range (2019) review
Tesla Model S vs. Audi e-tron GT quattro (2021): though the Tesla is more of a luxury saloon than a sports coupe, its range on a charge, its performance and pricing put it into direct competition with the Audi. There's an updated one on the way, too.