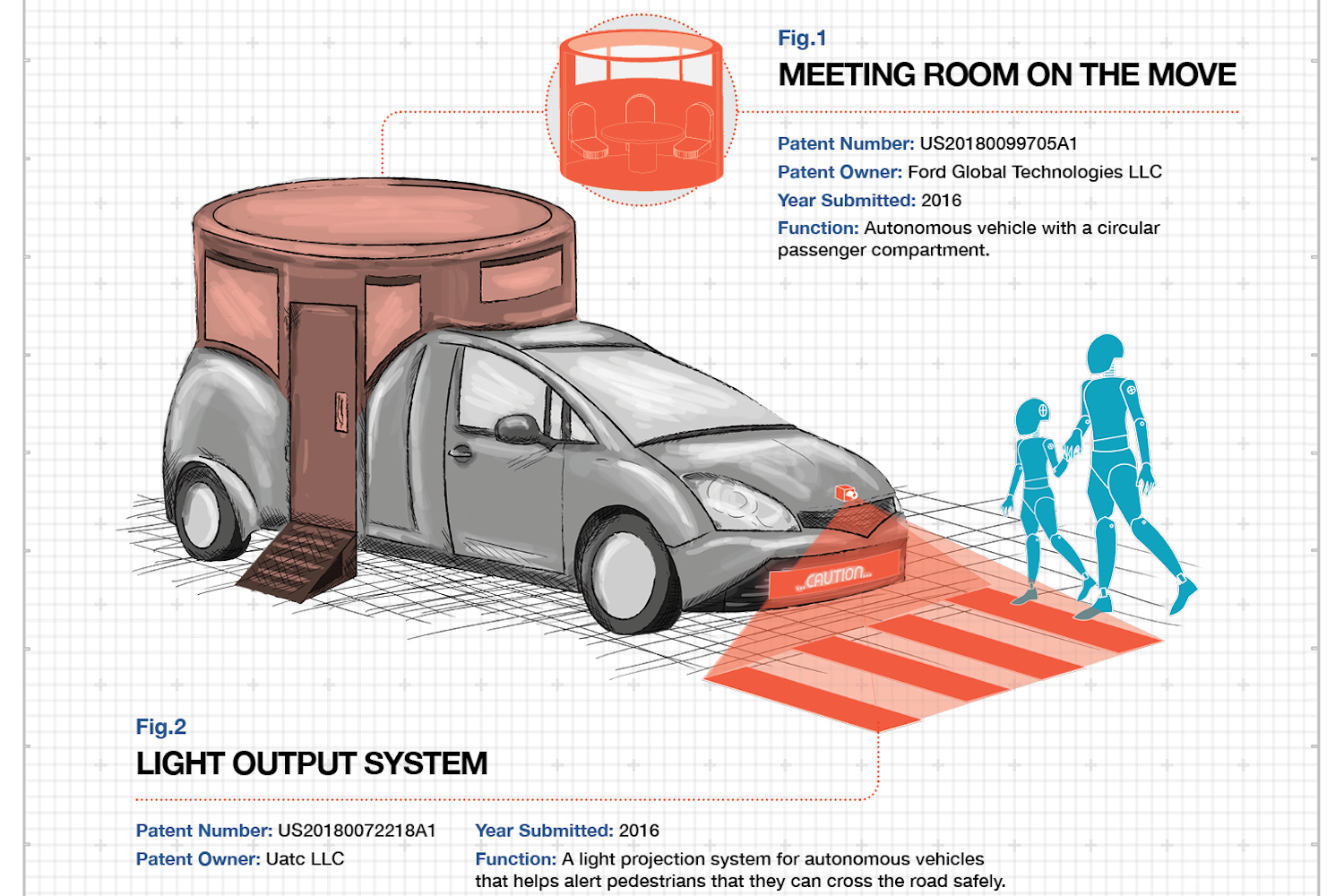 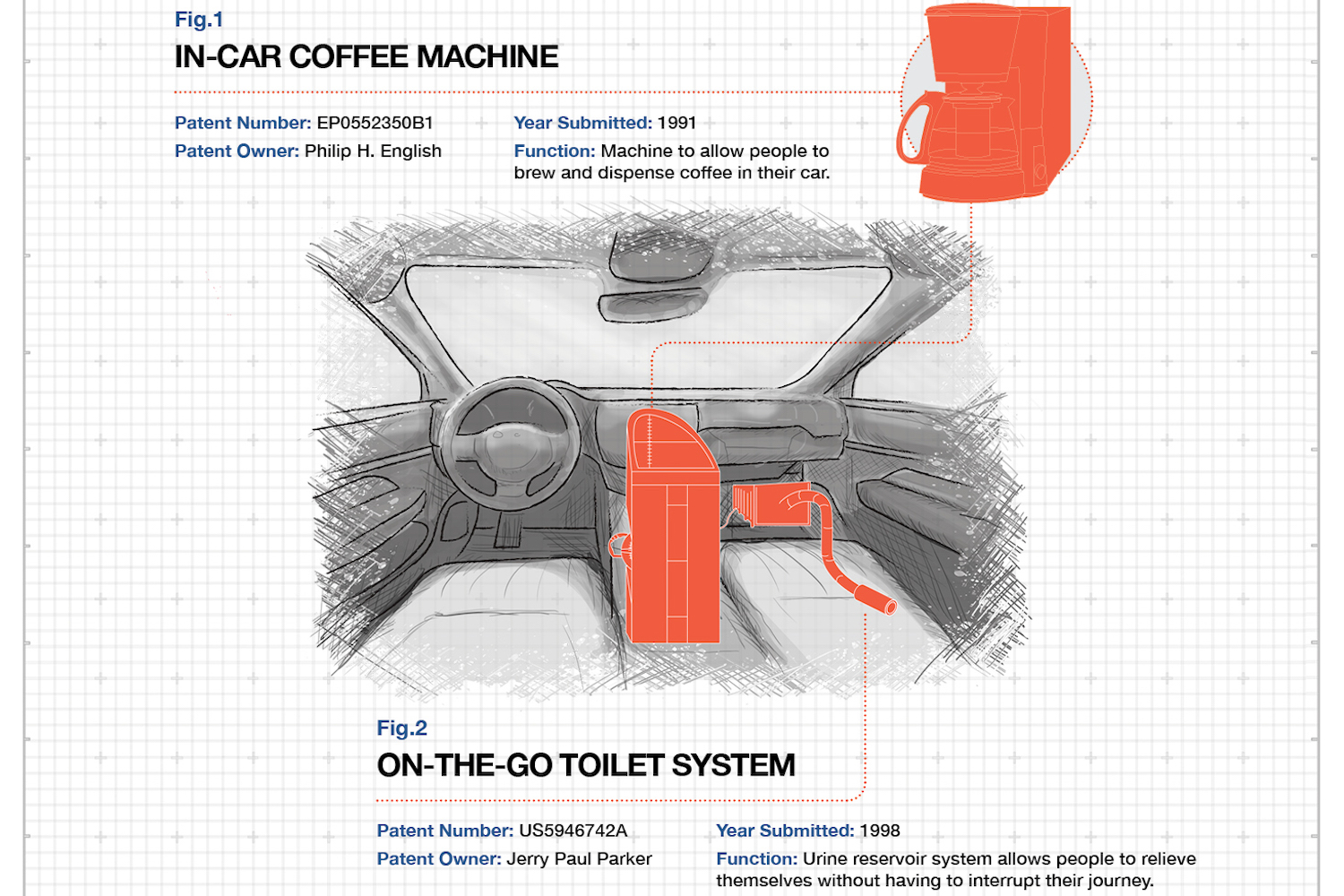 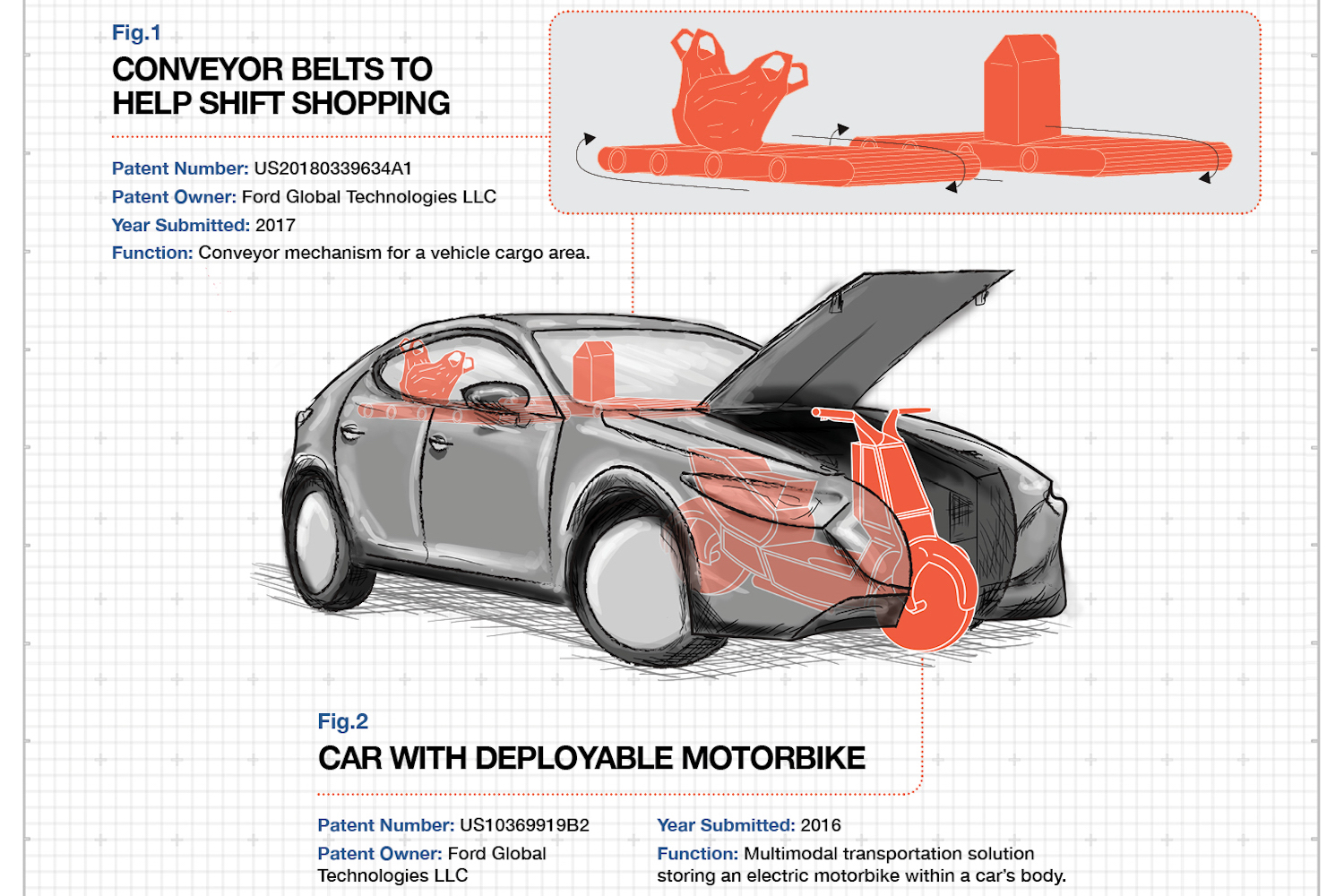 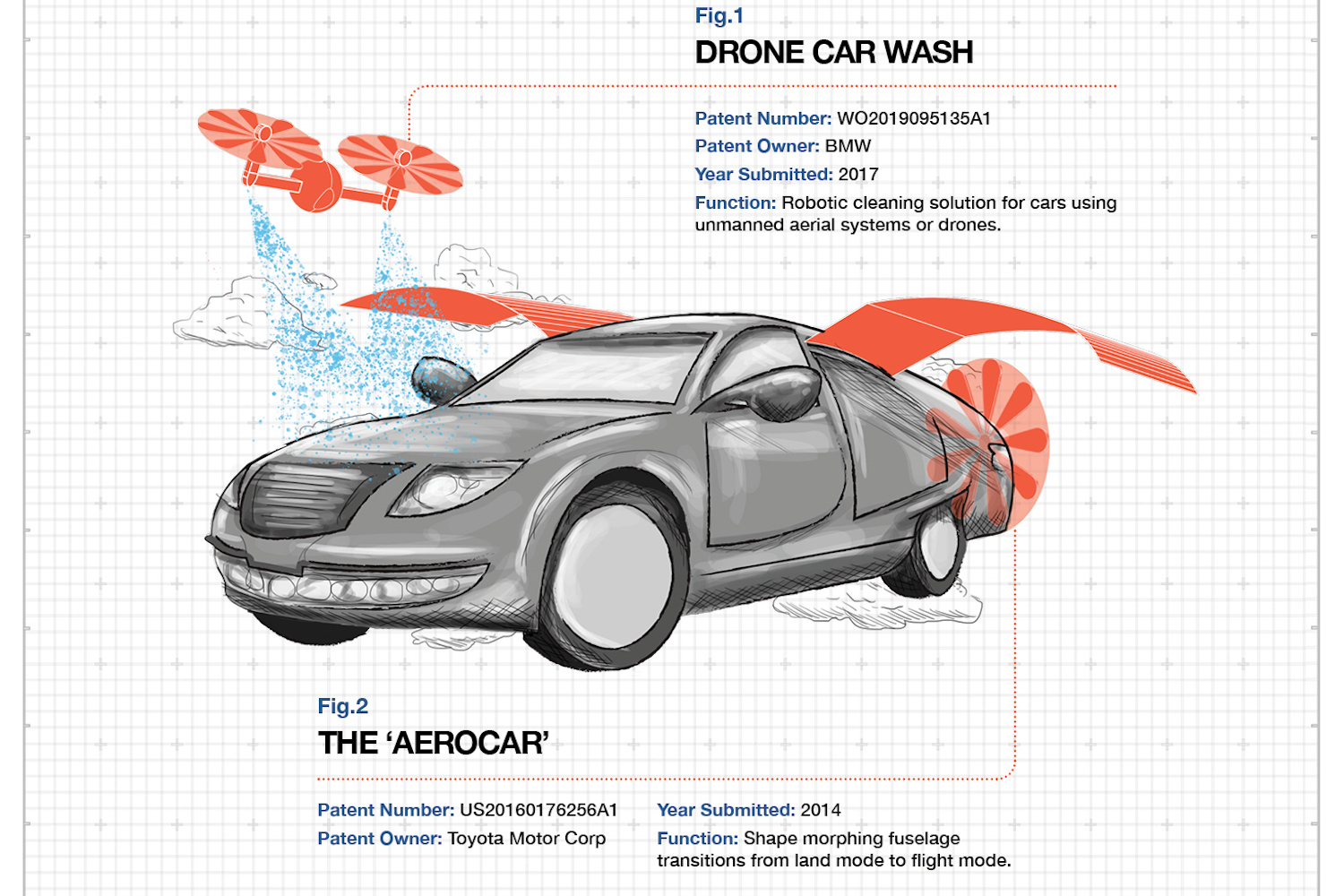 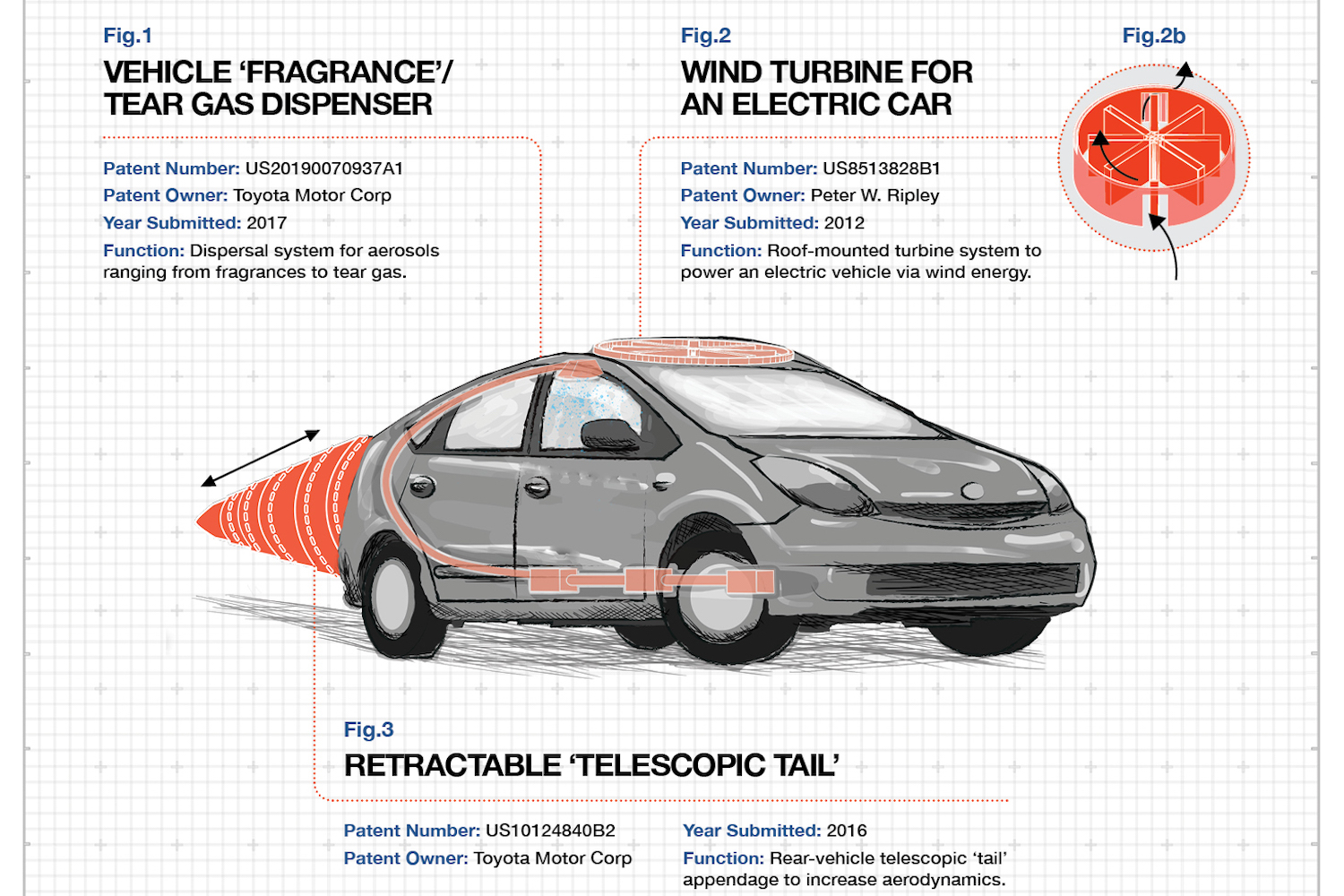 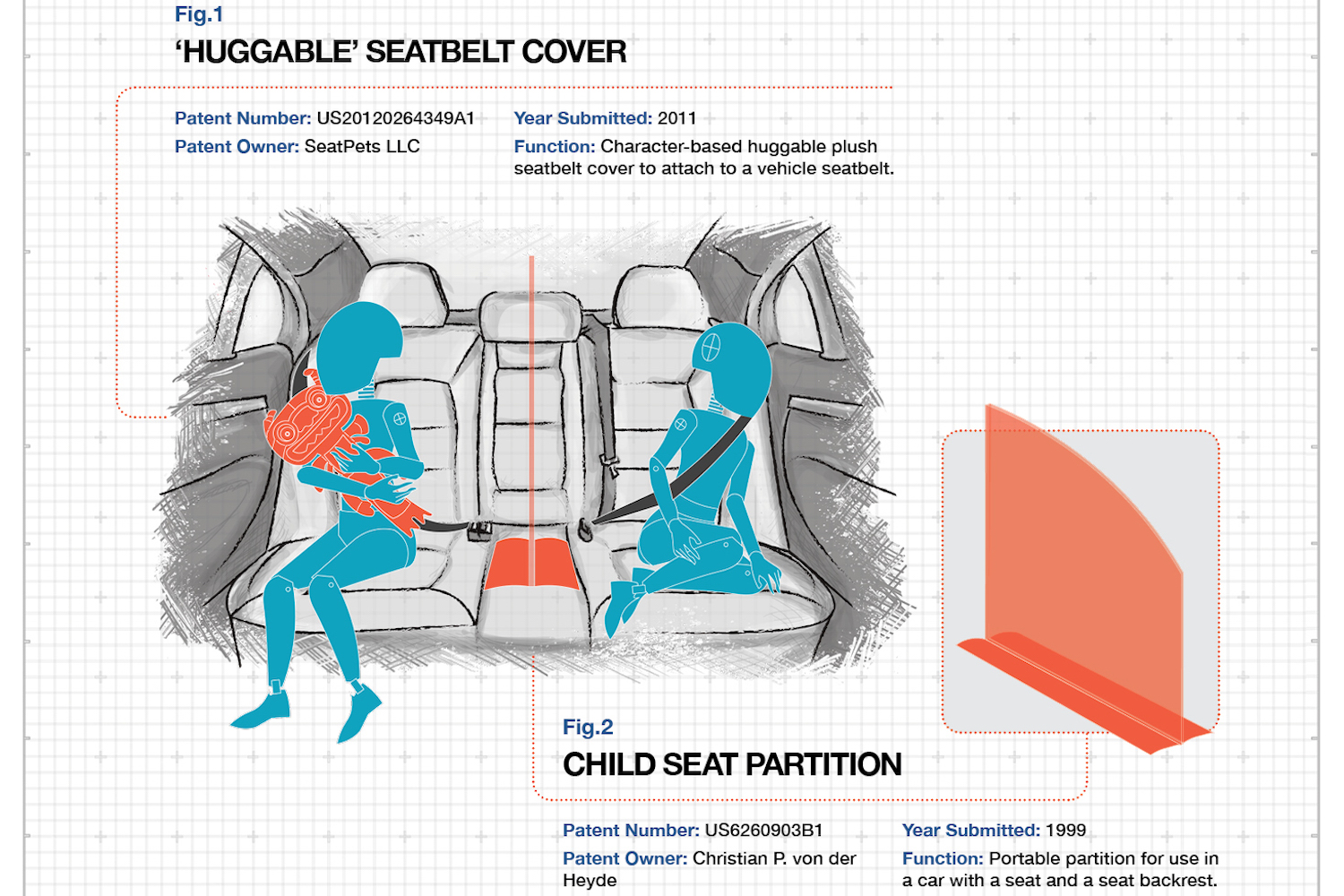 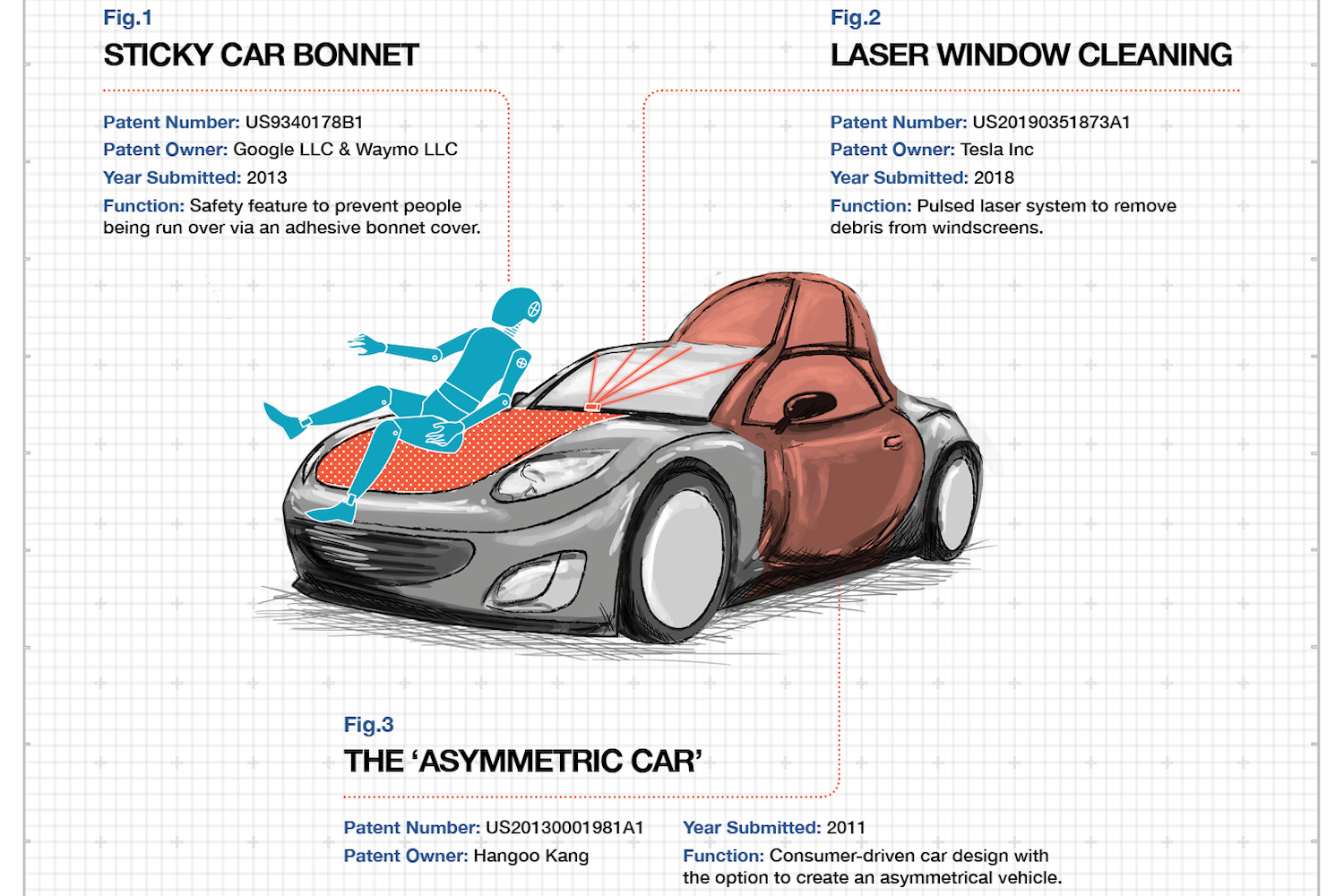 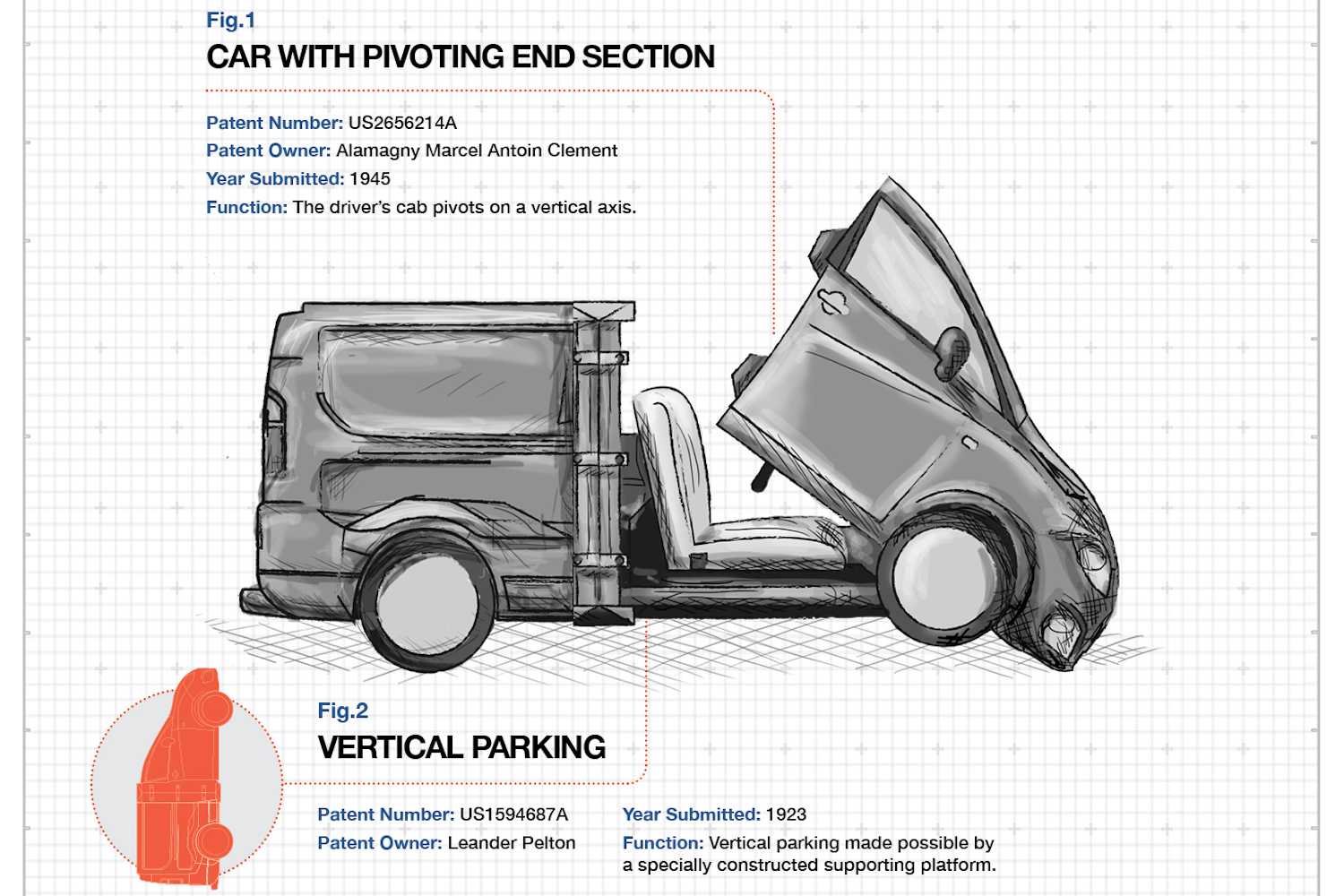 Vanarama.com looks up some of the wackier automotive patents filed throughout history.

If you watch far too many science-fiction films and their future-gazing antics with regards motoring, or you've sat in endless traffic jams and just wished your car could fly above the snarl-ups, or if you simply remember doodling on your textbooks and drawing vehicles with rockets on them when you were a child at school, then you'll have surely wondered what the automotive industry could do if it let loose with its imagination. Well, here are some of the most bizarre motoring patents from the past decade (and a few from even further back in time than that), courtesy of research carried out by Vanarama.com.

Lumping these first three patents together as methods to improve the ecological credentials, the performance potential and, er, the defence capabilities of given cars, the research by Vanarama.com highlights a 2012 idea from Peter W. Ripley to power electric vehicles (EVs) by a roof-mounted wind turbine. Now, we know that solar panels on the tops of EVs have been trialled before, but this is a whole new level. Makes sense, until you realise just how inefficient wind turbines are at generating meaningful energy, and presumably the talented Mr Ripley's patent doesn't mean for the EV in question to have a 105-metre-tall German-made fan standing atop the car. So whether the energy generated would outstrip the aerodynamic drag generated by having this fitted is quite another matter.

Talking of aerodynamic drag, Toyota's 2016 patent for a retractable telescopic tail is an amusing one. It would certainly put an end to those tailgating twits who like to sit three inches off your back bumper in heavy rain on the M50, of course, but whether it would actually meaningfully improve either the economy figures or speed of a given car is somewhat more debatable; just imagine the added weight of all the motors and folding metal required to make this thing work.

Sticking with Toyota, one year later than the 'aerotail', the Japanese giant filed for a patent on an aerosol-dispersal system. Nothing too unusual in this at first, especially as 'fragrances' are mentioned (and both BMW and Mercedes already have systems in production cars which will emit delicate scents into the passenger compartment via the climate control system), but then Toyota cheerfully goes on to mention that it could just as easily pump out tear gas. Dear lord! Perhaps not into the passenger compartment in this case, as that would be a VERY bad idea for the driver in particular, but it might give Mr Road Rage second thoughts about approaching your vehicle to remonstrate with you if he suddenly had to contend with a great cloud of mace in his chops.

The next three patents fall under safety, design and functionality. While car manufacturers sometimes go to great lengths to re-engineer bits of equipment that otherwise operate rather simplistically (and therefore beautifully) in the first place, there are certain automotive features which have stood the test of time - like three-point seatbelts. Or windscreen wipers. And it is on this last score that Tesla wades into the fray, rationalising in its 2018 patent that an array of pulsed lasers could remove debris and dirt from the windscreen, instead of a rubberised mechanical arm. Hmm. Not sure letting obvious Bond-like supervillain Elon Musk have access to lasers is a good idea, but that's by the by.

What isn't by the by is an asymmetric car, part of a patent filed in 2011 by Hangoo Kang. Seriously, while this opens the doors to comments about the Hyundai Veloster, the shoddiness of the British motor industry in the 1970s (for instance, there were plenty of Jensen Interceptors back then which were asymmetrical as they left the factory, albeit unintentionally so) and the sheer hideousness of BMW's current design direction being something which might be improved by a bit of asymmetry, the fact is that symmetrical = beautiful. It's why balanced human faces are considered the most lovely to behold. It's why cars look the same on both sides. Creating some lumpen monstrosity that looks different from one side to the other makes no sense at all.

And nor does the sticky car bonnet patent of 2013, filed by Google and Waymo. The idea is that, if you're a particularly murderous and inattentive driver who likes running down pedestrians, then in this instance the bonnet will catch them like sticky flypaper immediately after the initial impact, so they don't go under your wheels. Problem with that is that Google/Waymo are developing autonomous, self-driving cars between them, so, er... it kind of looks like they don't have faith in the safety credentials of their own technology. Ahem.

Ford's 2017 'conveyor mechanism for a vehicle cargo area' is either designed to move heavy shopping into the back of your boot, or drag bags forward for you so you don't have to. Either way, it seems a pretty needless addition and nothing like as clever as the Blue Oval's MegaBox, which you can already enjoy in the back of the latest Puma. Also from the brains of the Ford boffins was a 2016 filing for a car with a deployable electric motorbike. This is the kind of 'last mile' joined-up thinking that car companies have been exploring for a while now and it's a noble aim from Ford, although we can't help but feel that people would just as easily slap a bike rack on the back of their motor and then resort to pedal power when they need to.

One here from someone at Toyota (again) that proves they're a big fan of that shonky moment in The Man With The Golden Gun, where Francisco Scaramanga's AMC Matador Coupe turns into a plane to escape 007. Toyota's 2014 patent for a 'shape-morphing fuselage' is lifted almost straight from the 1974 Bond film - although, as we said at the top of the piece, the flying car is surely the Holy Grail of personal transportation. BMW was a little less ambitious with its 2017 application for a 'robotic cleaning solution for cars using unmanned aerial systems or drones', which is just like a fixed carwash, only with little flying robots instead.

Two here that would be dependent on cars being self-driving in the future - and one of them has already seen the light of day on the Mercedes F015 concept car. Uatc LLC's 2016 patent for light shows being beamed onto the road surface ahead of a vehicle, with their primary concern being messages and safety information for nearby pedestrians, is going to be a reality of the self-driving-car era. What might not be quite so in demand is Ford's patent from the same year, which talks of an 'autonomous vehicle with a circular passenger compartment' - in other words, a meeting room on the move. Obviously, lots of autonomous concept cars have posited the idea that occupants could do more with their time than simply staring out of the window aimlessly, with lounge concepts and working area ideas both featuring heavily in most futuristic machines - but the idea of a round-room design is not so prevalent...

Old ideas are sometimes the best

Two from antiquity here and one of them has made it into the world of transportation - the 1945 patent filed by a body known as Alamagny Marcel Antoin Clement, for vehicles where the driver's cab pivots on a vertical axis, is commonplace in the heavy goods vehicle (HGV) sector, where lorry cabs do indeed do this to allow access to the engine. Less commonplace is Leander Pelton's 1923 application for vertical parking, made possible by a specially constructed supporting platform. Right idea (as it would save on car-parking space immensely), but entirely the wrong execution, we fancy.

Drink-driving and its consequences

We're on two subjects here that have often been mooted by people involved/interested in the automotive industry: how to eat/drink in cars, and how to go to the toilet. In fact, Philip H. English's 1991 patent for an in-car coffee machine (does what it says on the tin) was actually brought to life in 2012 by (who else?) the Italians - or, more specifically, Fiat and its 500L, which came with an onboard Lavazza for all your caffeine-hit needs. The obvious consequence of quaffing a load of espressos on the move is that you'll need to evacuate fluids, which is where Jerry Paul Parker's 1998 patent for an integrated urine reservoir which 'allows people to relieve themselves without having to interrupt their journey' joins the conversation. Now, clearly, this raises all sorts of questions about the legality of such a thing, the sheer mechanics of... trying to attach the machine to the relevant parts of the body (urgh...), the whole hygiene issue and whether or not it's sexist, in that it probably wouldn't work very well for the female gender. Best to flush this idea away, eh?

It's no surprise that certain patents are filed to pacify those little monsters... we mean, wonders who often sit in the back seats. SeatPets LLC's 2011 idea for character-based huggable plush seatbelt covers has made it to market (look them up on Google - other search engines are available), but Christian P. van der Heyde's 1996 idea of a child seat partition speaks volumes about how rowdy his kids must be on long car journeys. Having a portable shield to stop little Johnny from hitting his baby sister incessantly is quite a dramatic development.

Who leads the patent pack?

You've seen just a fraction of the ideas that make it to patent, but which car manufacturer is filing the most patents? Well, taking the calendar year of 2018, it's a name you'll have heard quite a few times at the top - Toyota, which bunged in 2,554 patents during the period. Ford was close behind with 2,149 patents, while Hyundai rounds out the top three with 1,539 innovative ideas. General Motors, Japanese parts manufacturer Denso, Honda, Porsche, Nissan, tyre company Continental and another parts-maker, French firm Valeo, complete the top ten, Valeo filing 333 patents in 2018.