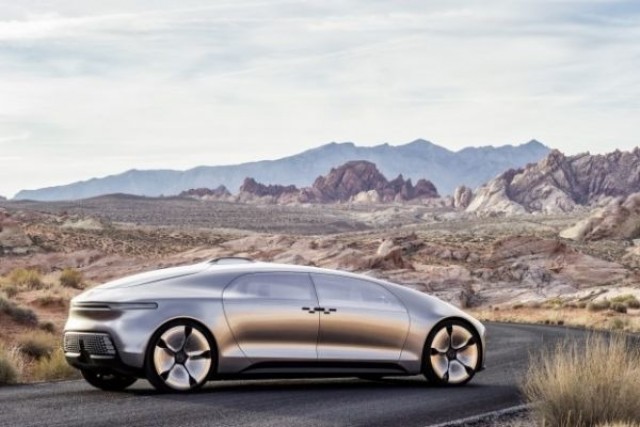 Mercedes boss Dieter Zetsche took to the stage at the Consumer Electronics Show (CES) in Las Vegas this morning (6 January, 2015) to reveal a concept that could some day form the basis for a future and futuristic S-Class. The F015 Luxury In Motion is a swoopy mono-box concept roughly the size of a current S-Class.

It's powered by a 286hp hydrogen fuel cell that delivers electricity to two motors pushing the F015 to 100km/h in a claimed 6.7 seconds. Mercedes further claims that it can go for more than 1,100km on a combination of full hydrogen tanks and a full charge of the batteries from the car's plug-in function.

Inside it's truly futuristic, using its self-driving autonomous systems to allow the front seats to be swivelled around to face those sitting in the back while the steering wheel folds away entirely. All displays are high definition LCD screens with gesture control so you can turn the cabin into a mobile cinema if the mood takes you.

The F015 also takes pedestrian protection to a new level. Its sensors can detect someone waiting to cross at the kerb in front of you, stop the car, project the image of a pedestrian crossing onto the road and then use an electronic voice to invite them to cross the road safely.

"Anyone who focuses solely on the technology has not yet grasped how autonomous driving will change our society. The car is growing beyond its role as a mere means of transport and will ultimately become a mobile living space" Zetsche told the assembled media at the CES.