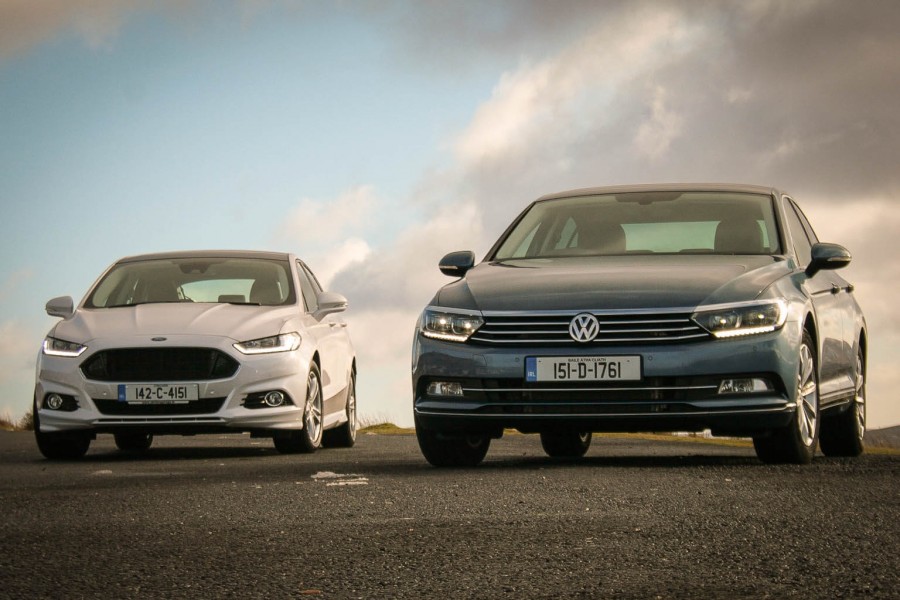 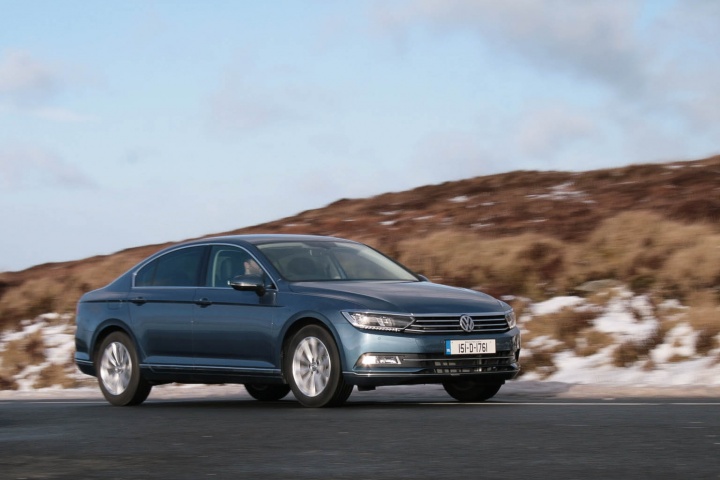 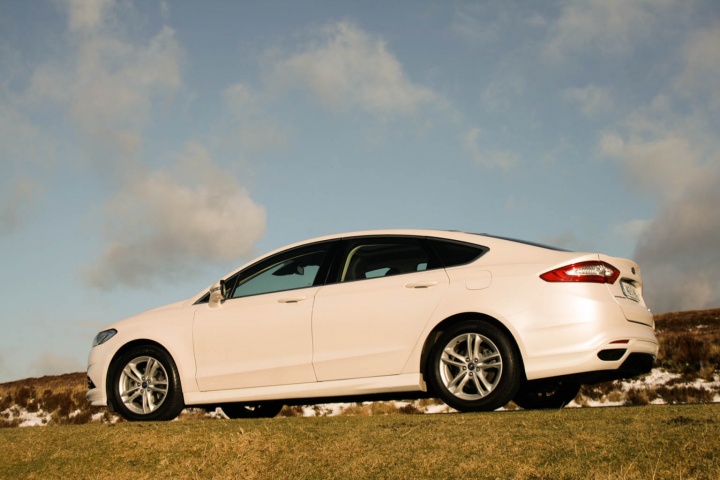 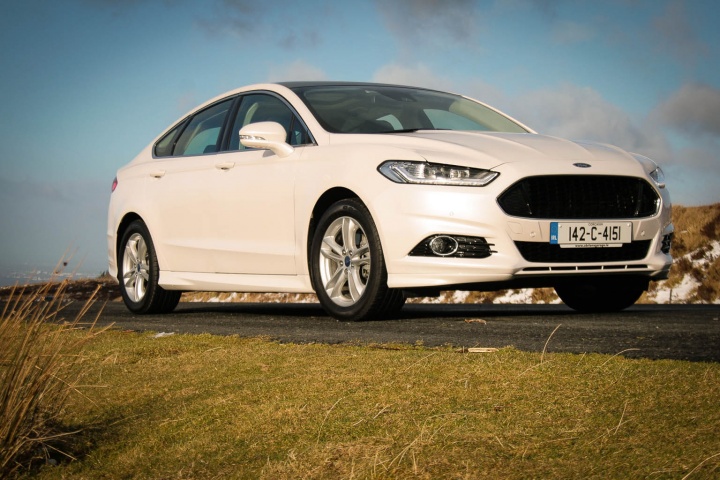 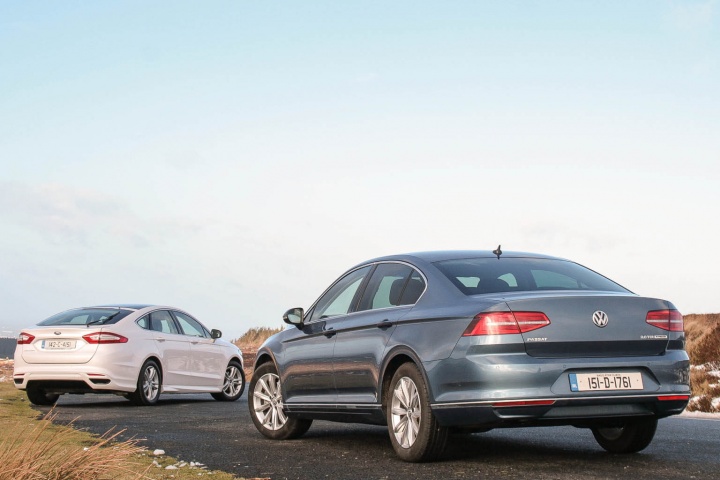 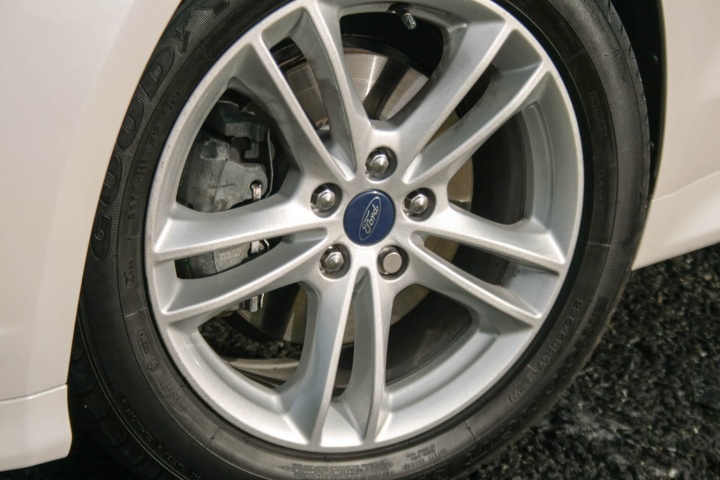 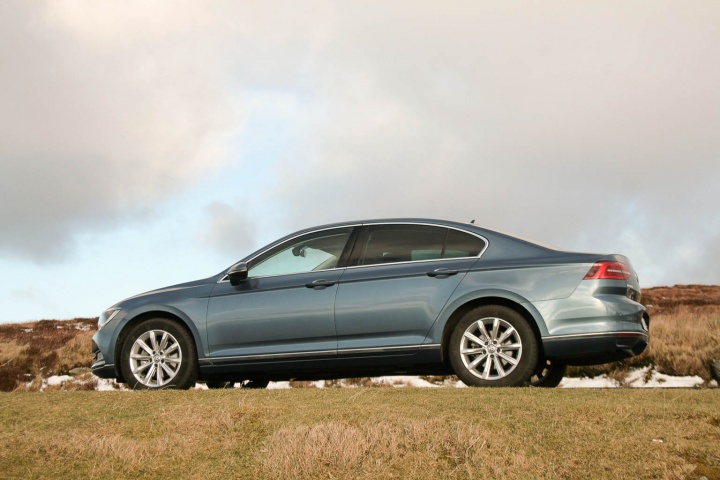 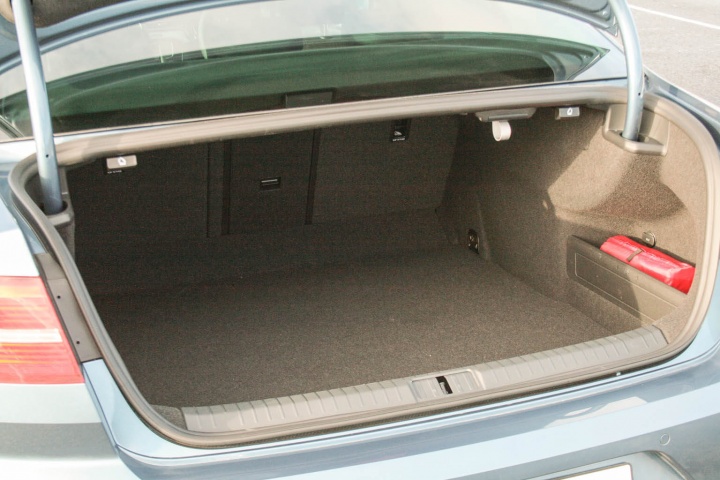 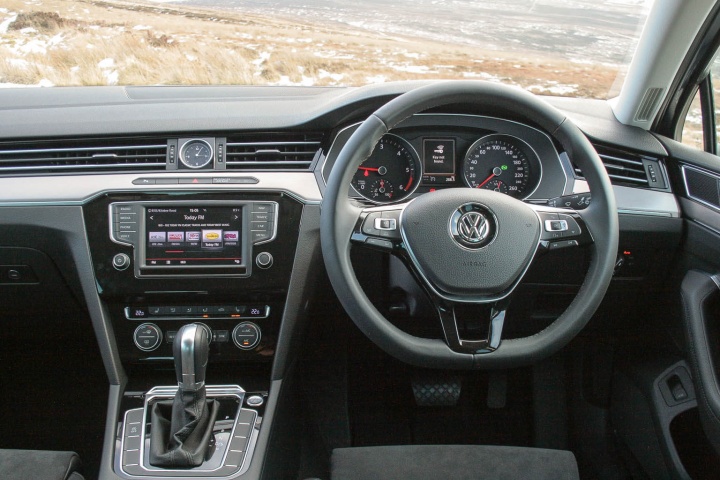 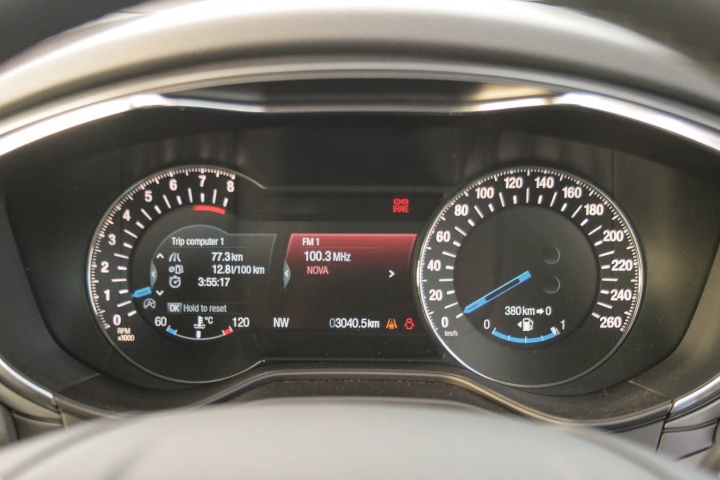 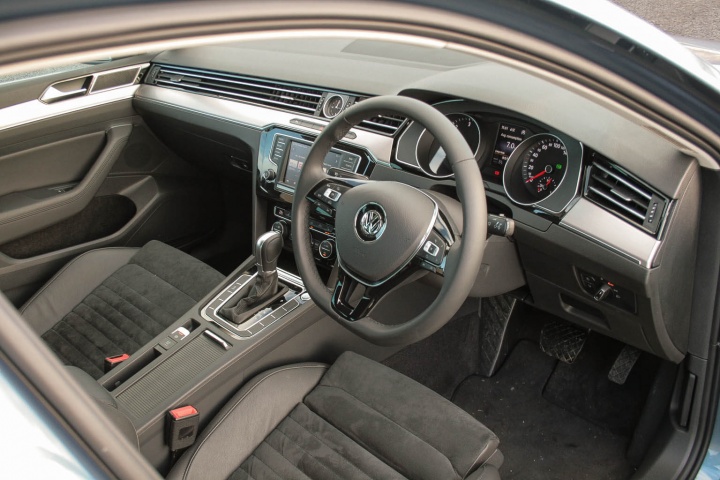 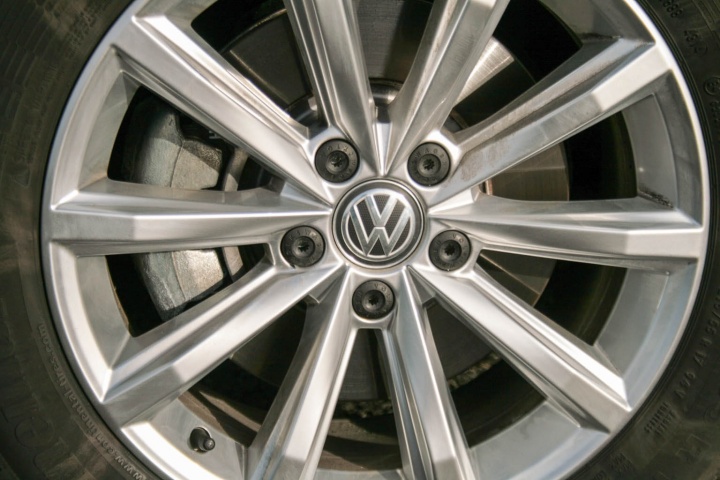 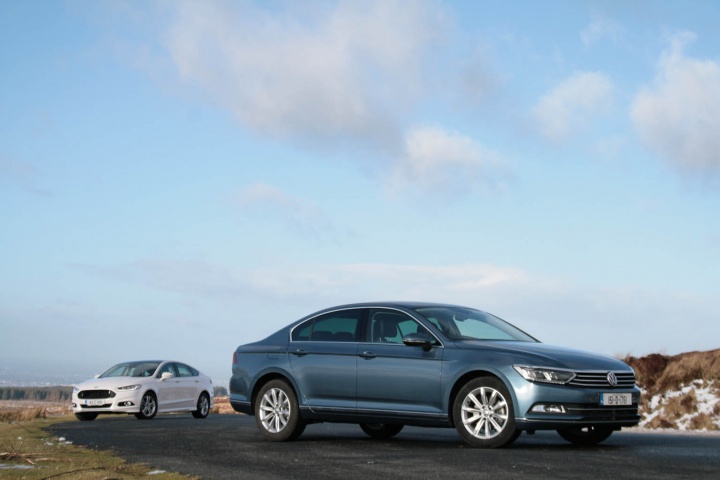 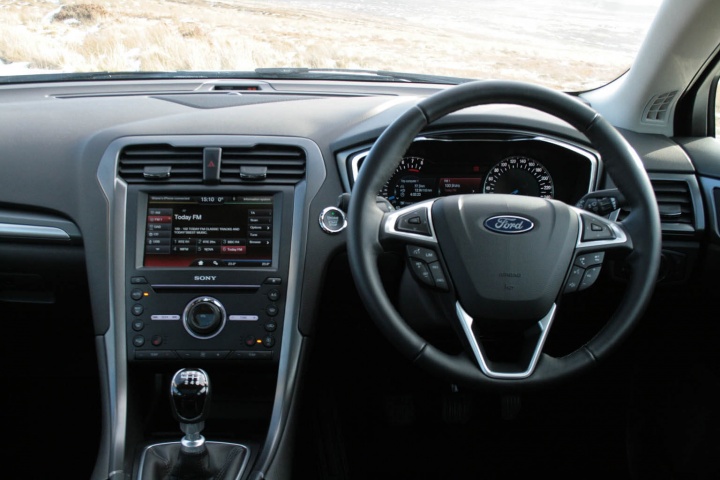 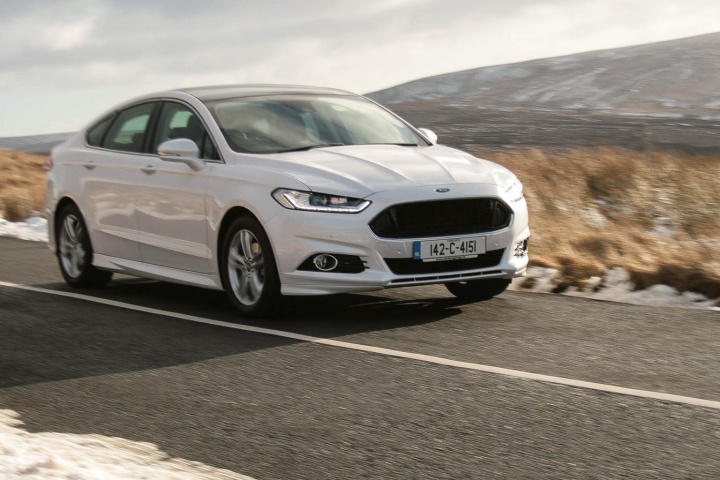 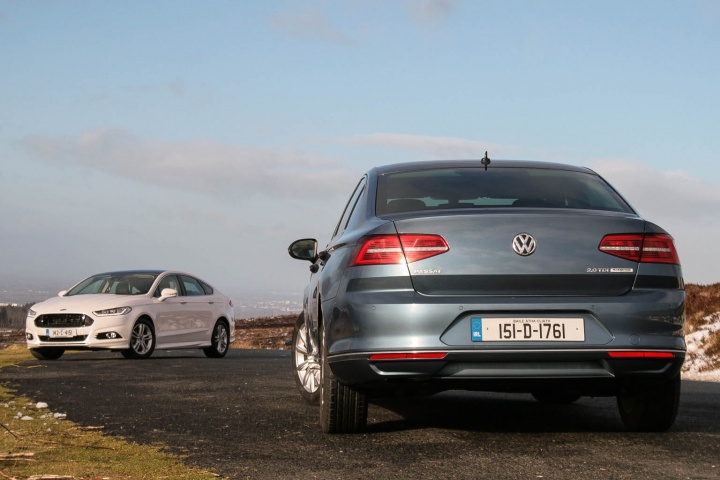 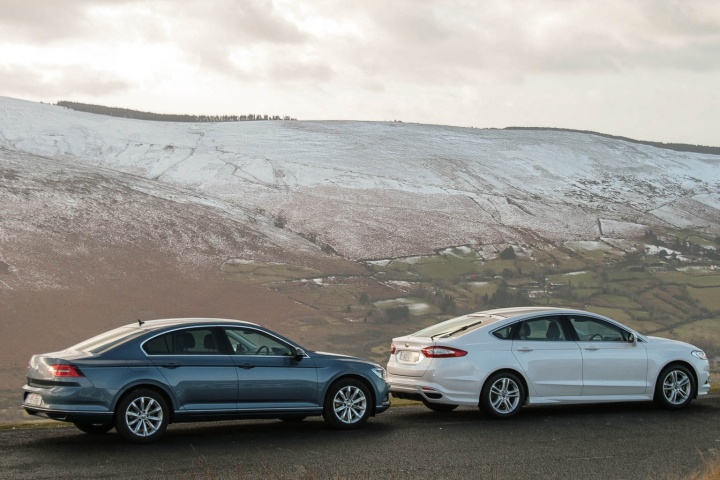 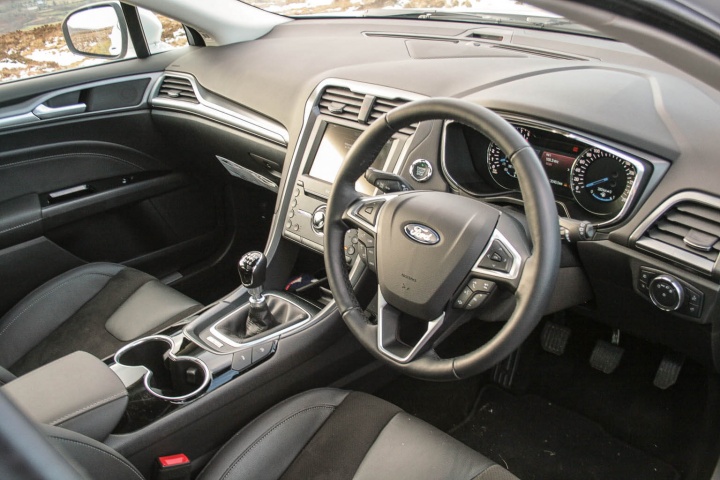 My these cars have grown! Park the 2015 models next to their 2004 equivalents and it's quite eye-opening how much bigger the new cars are. They're encroaching on vehicles from the class above now and their size adds to their presence on the road. The Mondeo is perhaps the most striking of the two cars with its slender, sharp headlights and distinctive grille design, but it's a little under-wheeled in most specifications so only looks at its best when you add large optional alloys to it. In contrast, the Passat is a subtle car. The rear looks very similar to the old model (until you put them side-by-side), though the front end's low-set appearance is attractive. It's worth noting that the Mondeo is only offered as a five-door hatchback or estate (unless you upgrade to the Mondeo Vignale), while the Passat is either a four-door saloon or an estate. The three-box saloon profile is more elegant to our eyes.

The benefit of large exteriors should be capacious cabins, and these cars don't disappoint in that regard; there's plenty of space to stretch out, front or rear. In the Mondeo, this feeling is enhanced by the generous extra storage area found under the centre of the dashboard. Indeed, there are loads of cubbyholes in the Ford's cabin and its boot, at 541 litres, is large. However, the Passat trumps it with a 586-litre capacity, though of course the Mondeo's hatchback makes its boot easier to access. Or so you'd hope. Ford has made the hatch ridiculously heavy to open, as if the hatchback itself is hiding 20kg of lead in it. Very odd. In contrast, the Passat's boot lid pops open conveniently when you hold down a button on the key.

Storage aside, I prefer the design of the Passat's interior. The elongated air vent detail is glorious and while the rest is pretty standard Volkswagen stuff, it works well and looks good. The Ford's cabin isn't bad at all. Indeed, the eight-inch SYNC touchscreen is better than the Passat's and the Mondeo's instruments are lovely to look at and use. However, the centre console on the Mondeo is a mess. It looks ok, but in operation there are too many little circular buttons of the same size and way too many little orange and red lights next to them to distract you. I'd have a little of each car in my ideal cabin, but more from the Passat's.

The Mondeo used to be the undisputed driving champion in the class, mixing great comfort and bump absorption with fantastic composure and even a little engagement to keep keener drivers interested. The new model has retained much of that, but the rest of the segment has moved on and it no longer stands head and shoulders above of the others. Its steering is still a highlight, but the suspension doesn't feel well-suited to Irish roads. It's actually better at speed and on the motorway, but around town the ride is a little choppy and unsettled. Very strange. In contrast, the Passat feels properly finished. It's quiet, composed and comfortable in all situations. I wouldn't choose it to go for a drive on a twisty road for the sake of it, but it's very good by any measure.

Many buyers will go for the 1.6-litre engines in these cars, but really, they need to invest in the 2.0-litre diesels, as they're more up to the job. They both produce 150hp and though the Mondeo has 10Nm more torque at its disposal, it's about 80kg heavier than the Passat and in fact the latter is considerably faster in a straight line and a little more economical. Both engines are relatively well isolated from the cabins, though we reckon Ford and Volkswagen could do better in that regard. In terms of transmissions, the Passat's dual-clutch DSG automatic option is noticeably more polished than Ford's 'Powershift' automatic. It's smoother and quicker in most situations. In contrast, if you're sticking with a manual gearbox, the Ford's is more satisfying to use.

Volkswagen's usual three trim lines of Trendline, Comfortline and Highline are offered in the Passat, starting at €27,635, €29,585 and €33,015 respectively, though buyers have more choice with Comfortline and Highline Business Editions too, plus the standalone Passat GTE. There's much more choice in the engine range. Petrol options come in the form of a 1.4-litre TSI engine producing either 125hp or, in advanced Active Cylinder Technology specification, 150hp. The latter is actually the more efficient of the two, emitting 115g/km, though it's not cheap as it's only available in conjunction with the Highline spec.

Most Passat buyers are expected to stick with diesel engines. The 1.6 TDI unit now has 120hp and emits as low as 103g/km, while the 2.0-litre TDI engine produces 150hp as standard or 190hp in the range-topping model. With a manual gearbox all the diesels are, impressively, in Band A3 for tax. Volkswagen offers its DSG automatic with nearly all versions of the Passat and even 4Motion four-wheel drive.

I thought this would be a closer fight. I fully expected the Mondeo to impress on the road and give the Passat's classiness a run for its money, but driven back-to-back, the Mondeo just isn't good enough to outshine the Volkswagen. In comparison to the Ford, the Passat feels rock solid and capable of competing with the class above. Although the Mondeo will no doubt continue to sell well in spite of this, I'd choose the Passat every time. It's not an exciting car, but it's brilliantly executed and oozes showroom appeal.

Given Volkswagen's current form we had a sense that the Passat would deliver a strong performance here. That said, Ford has had an additional two years in which to further fine-tune the Mondeo, so it really should be an excellent car. Sadly this isn't the case. The Ford is a good improvement over its predecessor but it still lacks the finesse of the Passat. The Volkswagen feels the more premium of the two.

Leaving specifications aside, the cars are more closely matched on the road, with the Ford offering a slightly more comfortable ride. It also gives a more involving level of feedback through the steering wheel, but in a segment that is now seeing every manufacturer seriously raising its game the Ford simply doesn't perform as well as it should. The Passat on the other hand delivers a convincing and solid all-round performance that makes the Mondeo look and feel like an old car already, and given the proximity of each model in price the Volkswagen makes a clear case for itself as the one to go for.