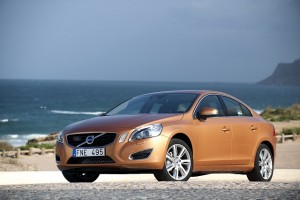 Volvo's new S60 retains the company's core values, but adds style and dynamism to the mix. We've driven it.

More than ever Volvo appears to want some of what BMW, Mercedes-Benz and Audi has got. It reckons that with the new S60 it has got the car to take them on too, the Swedes talking confidently about the 'most sporting and dynamic Volvo ever.' That might be true, but Volvo looks to have achieved that without losing its Volvo-ness, which is no bad thing.

Volvo promised the dramatic S60 concept would provide the shape for the production car and it's largely delivered that. Naturally some of the finer details have been lost in translation, but it's certainly a striking looker. Like every manufacturer at the moment it's claiming coup?-like styling, even suggesting the rear doors disappear visually. That's stretching it quite a bit, not least because the rear door handles are huge.

Mixing traditional Volvo design cues with more flair the S60 takes the strong shoulder line typical of modern Volvos and kinks it up over the rear. It's a handsome, rather than beautiful car, the slightly droopy headlights and busy protruding grille meaning the front is not its best angle.

Inside it's a demonstration of simple Swedish simplicity and ease of operation. The fit and finish is up with Audi's offerings, while the sports contoured seats retain the sofa-like feel that's long been a Volvo trait. There's plenty of space in there too, and the boot's so big you might not have to wait for the forthcoming estate version.

Without quite the cachet to compete against the established Germans Volvo throws kit at the S60. Most significantly in this class is the standard fitment of City Safety, Volvo's collision avoidance technology. Opt for the Driver Support Pack (a €2,250 option) and the S60 comes with Active Cruise Control with distance alert and Queue Assist (which works from standstill to 200km/h), Collision Warning with full Auto Brake, Lane Departure Warning with Driver Alert Control and Blind Spot Information System. All of that means you'll have to be pretty determined to crash it, as the S60 will be trying its best to stop you.

Drive the S60 with all that kit active and it's like sitting behind a rolling pinball machine, the plentiful bings, bongs and flashing lights little more than an annoyance. If you're sleepy or incompetent enough to need them let someone else drive. Switching off the light and sound show reveals a Volvo that lives up to the company's claims of being more dynamic and interesting to drive than anything else it's built before. Thank the chassis, which can be had in front- or four-wheel drive - all wheels being driven on the performance T6 flagship. Forget about that though as all but one or two people will buy it, the diesels being the engines of choice.

Volvo reckons the vast majority of buyers will opt for diesel power. And until the super-frugal sub-115g/km 1.6-litre DRIVe model arrives that means either the 163hp D3 or the 203hp D5. Ignore the D3 and D5 names, as these are the same five-cylinder units, the D3 being 2.0-litres and the D5 being a 2.4-litre unit. The similarities don't stop at the block either, as each delivers the same 139g/km of CO2 and 5.3 l/100km (53.3mpg) on the combined cycle - making the 2.4-litre no more of a tax burden if you choose it.

With nearly identical torque figures both of the fives delivers useful low-down urgency and cruise quietly at motorway speeds on next-to no revs. They're quiet most of the time, but rev them harder and the strange, but not unappealing, five-cylinder growl can be heard, but it's rarely unruly. Much like the handling, which proves to be surprisingly surefooted and resistant to understeer.

What's most impressive though is the S60's ability to smother nasty road surfaces. It's a shame the engineers didn't add some more feel to the steering, which, although accurate and quick enough, gives little in the way of information.

Given its new-found dynamism it's odd that with the automatic that the only way you can shift gears for yourself is via the gear selector, Volvo not putting paddles on the steering wheel. Given you can control just about everything else on the wheel it's an oversight, especially as the auto often has different ideas as to when changing is a good idea than you might.

Volvo makes the S60 with two different chassis settings, us Europeans getting a car with a more sporting bent, while other markets like America get an S60 which is focussed more on comfort. Given the European S60 does comfort very well the US spec cars must be like driving magic carpets.

The new S60 is sportier and more dynamic, but Volvo has achieved this without losing its core appeal of comfort and refinement. Add some dramatic new looks, an interior that's better finished than its BMW and Mercedes premium rivals and the S60 makes a strong case for itself. It's unlikely to persuade customers to trade in their German premium machines, but it might just stop a few buyers coming out of mainstream cars from ever reaching their plate glass showrooms. The S60 will be in Irish showrooms before the end of the summer.