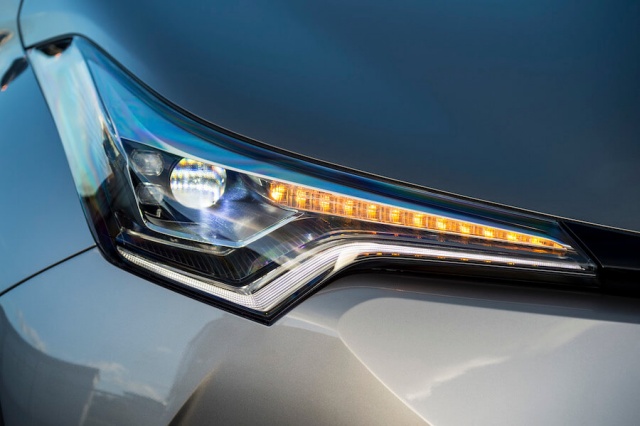 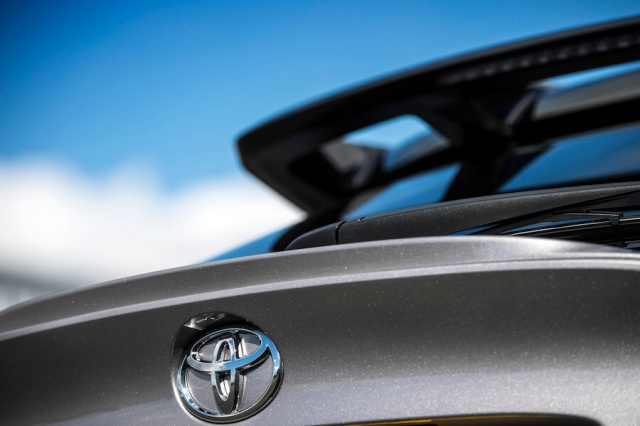 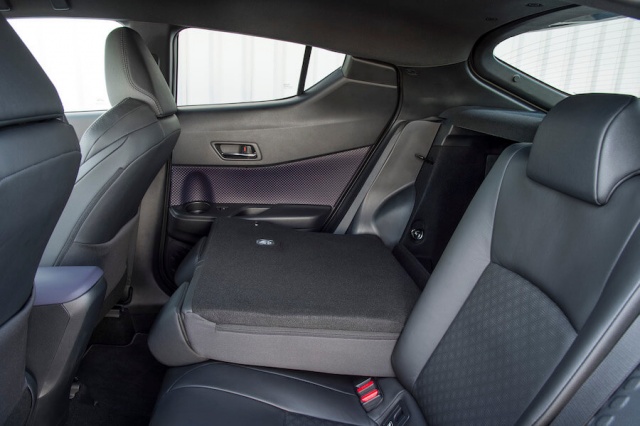 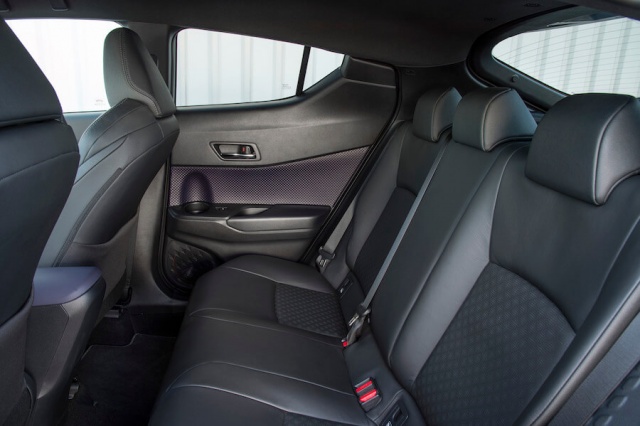 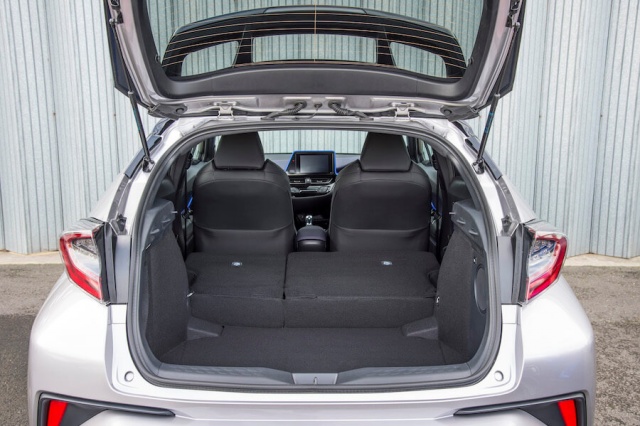 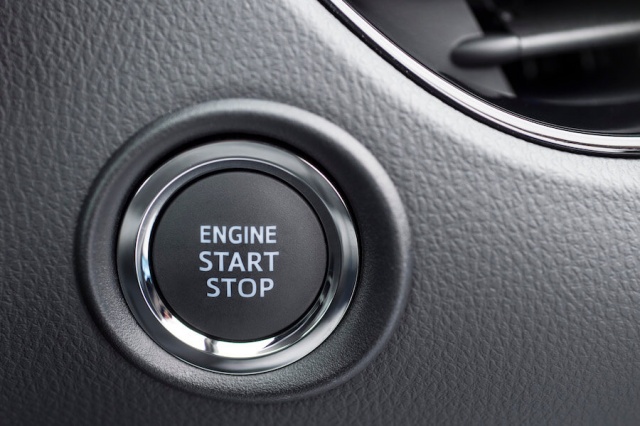 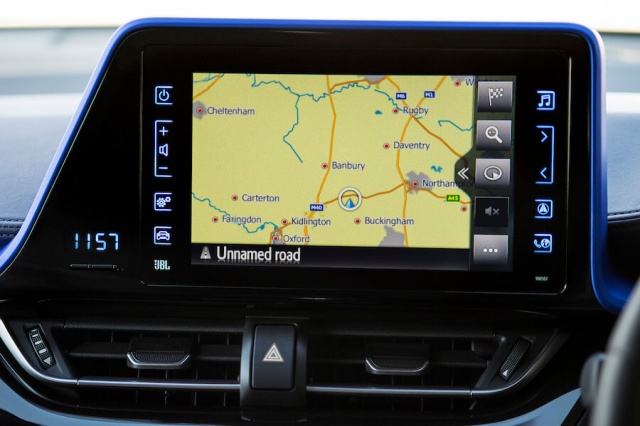 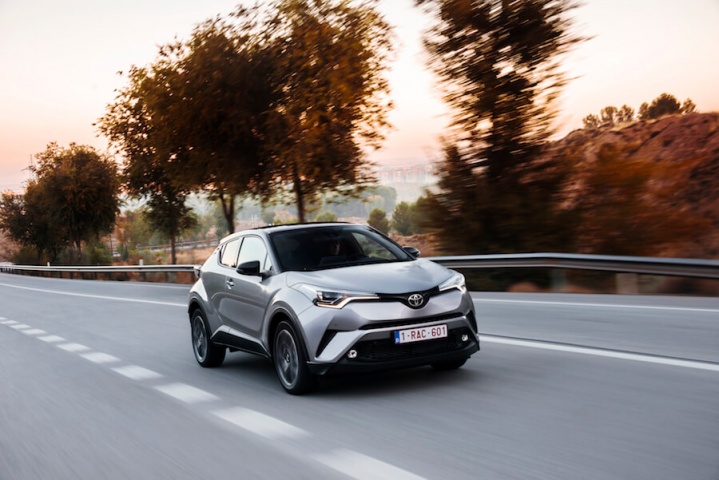 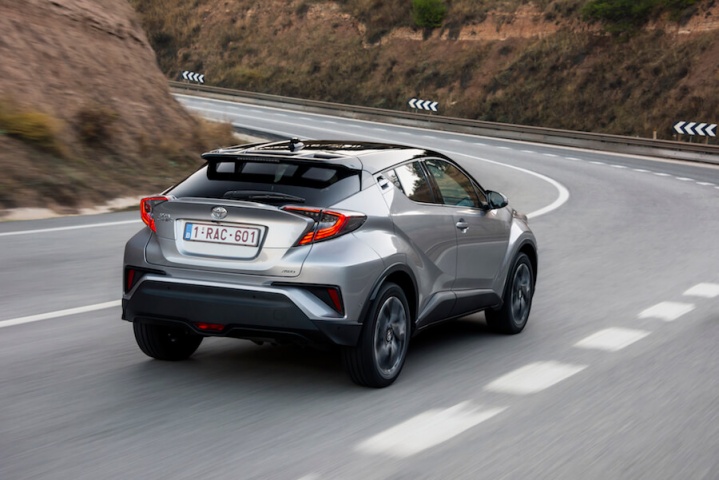 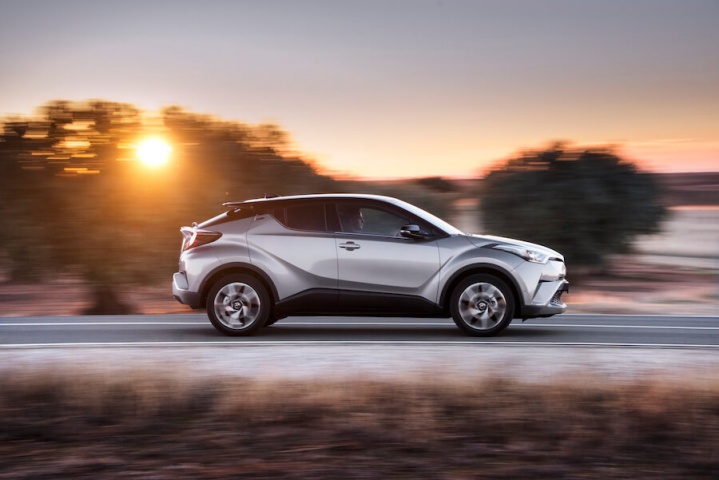 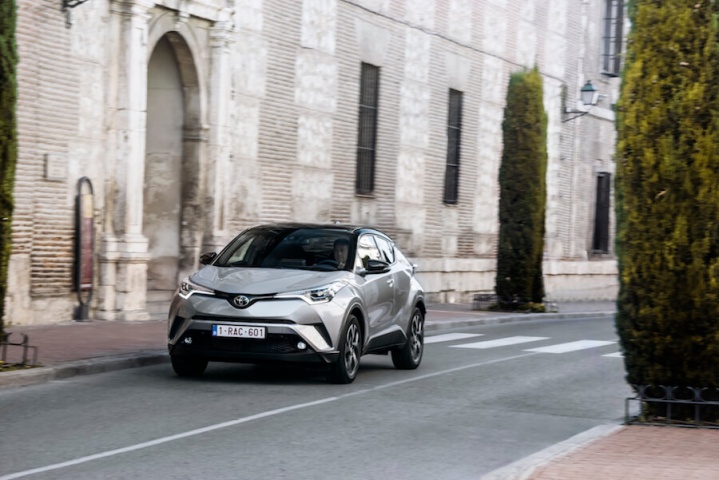 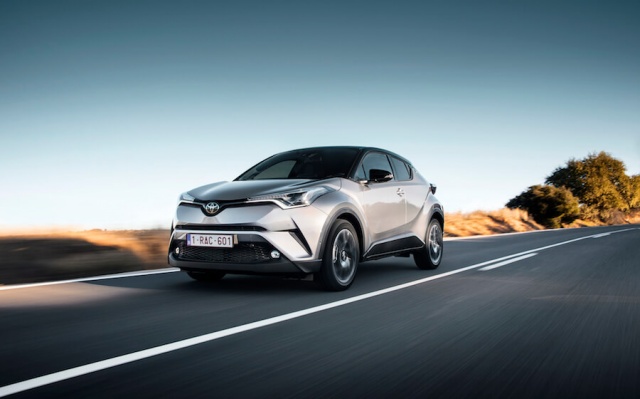 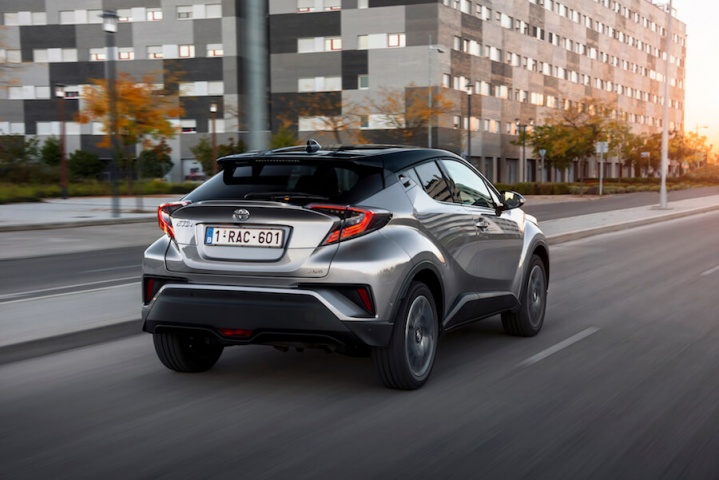 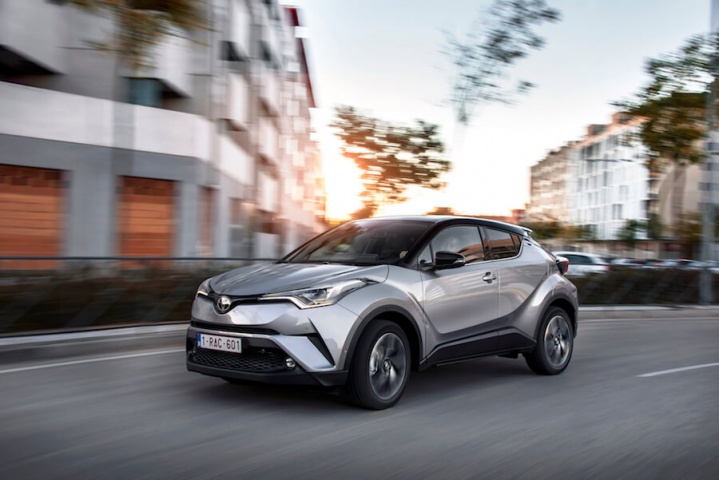 Toyota's Qashqai rival majors on style and driving engagement, and this 1.2 petrol turbo is more fun than the hybrid.

While more conservative buyers may be put off, and it's not as practical as some rivals, the new Toyota C-HR is good enough to be a possible game-changer for the Japanese company's brand image.

Just stop for a moment and think: the C-HR is from the same company that gave us the Auris and Corolla. Now, the Auris and Corolla are fine, reliable, workmanlike cars, but in terms of styling they are very much of the wallflower variety. By comparison, the C-HR is strutting its stuff in the middle of the dance floor, in its best pair of skinny jeans. It's a design that may or may not age well, and you could accuse it of being over-fussy in some areas, but for the most part this is a design that is both striking and pleasing. It looks best in metallic silver or blue with the contrasting black roof, if you're asking.

And it's even better inside. Again, previous Toyotas have been fine, but nothing more, and generally heavy on the plain black plastic. The C-HR looks and feels far more like a junior Lexus. The touchy-feely quality is off the scale good, and little touches like the diamond-cut plastic panels on the doors, meant to echo the 'faceted' styling of the exterior, are really nice. The seats are good, if a little high-set and upright, and the eight-inch touchscreen, canted as is the rest of the centre console towards the driver, is standard across the range and really lifts the cabin. The C-HR is really comfortable, although the convex shape of the dashboard (very BMW-esque) does eat into knee room for the front seat passenger.

As for the back: it's deceptive. Toyota says it's a match for the Nissan Qashqai and the Renault Kadjar, but the sharp up-sweep of the window line and the plunging roof make it look much smaller. Actually, space isn't bad - I'm six-feet tall and aside from slightly tight headroom, I can fit back there just fine, but kids may well complain about a lack of view out.

The boot is also quite small. At 377 litres, it's the same size as you get in an Auris hatchback, and is well out-sized by the Qashqai and most other crossovers. It's deep and square, which is good, but outright space has been compromised in favour of styling.

It's in the dynamic department where the C-HR makes the most significant break with Toyota tradition. Previously, most Toyotas (aside from specialist cases such as the GT86 coupe or the old Supra) have been designed to be as unthreatening as possible from a handling point of view. Safe and stolid, but not engaging. The C-HR is really quite different.

The steering weight is a little on the light side, and there's not much feedback through the rim, but Toyota's engineering team, led by part-time racer Hiroyuki Koba, has made it so responsive that you can actually find yourself turning too quickly into corners at first. The C-HR's chassis (and it's based on the same highly flexible Toyota New Generation Architecture as the new Prius) has been set up to be largely forgiving, but highly fluid. So it proves. Although the 18-inch wheels (standard on all but the basic Luna models) can induce a touch of fidget, the overriding sensation of the C-HR's handling is one of fluidity. It really just flows, effortlessly but not aloofly, from apex to apex and is really quite, dare we say it, fun.

This, the 1.2 petrol turbo version, is also distinctly more enjoyable to drive than the Hybrid model. Partly, that's down to weight - the 1.2 has around 60kg less to deal with than the part-electric C-HR and it shows in slightly better ride quality and a sense of improved responsiveness at the front end. Basically, if you live and drive exclusively in town, buy the Hybrid, but anyone with a twisty road in their commute really needs to get this 1.2.

It's also, in and of itself, a delightful engine. Numbers such as 116hp and 185Nm aren't big, and the C-HR is hardly a featherweight, but the engine delivers what it's got with smoothness and enthusiasm, so aside from occasionally being caught out by a steep incline in a higher gear, it never feels especially slow. It's also very refined, more so than the Hybrid because you don't have to put up with the high revs caused by the CVT gearbox. That said, we did notice an occasional high-pitched whine at times on the motorway, so it's not perfect.

The six-speed manual gearbox is very good though. The shift weight and throw are lovely, although it's occasionally possible to hook third when you were going for fifth. The matching of the weights of the clutch pedal and gearshift is really good, though - BMW good. It's also an 'intelligent manual transmission', or IMT, which is Toyota's way of saying that it blips the throttle for you on downshifts, and also boosts torque output when pulling away in first, to help reduce the chance of a stall.

With prices starting at €26,895, the C-HR is pitched a little more expensive than the likes of the Hyundai Tucson and SEAT Ateca, and can't match either car for interior or boot space. That said, it's well equipped, with that eight-inch screen standard across the range. All models also get Toyota's Safety Sense setup, which includes autonomous emergency braking, active cruise control, lane departure warning and automatic high-beam headlamps. Everything but the base Luna model also gets road sign recognition. The Luna comes with 17-inch alloys as standard, while the Luna Sport and Sol versions get 18-inch rims. Sol also gets part-leather upholstery, but all C-HRs will have a reversing camera, fog lamps, rain sensor wipers, dual-zone air conditioning and a leather-wrapped steering wheel.

Here, for the first time in a long time, is a mid-range, mainstream Toyota model that you could, seriously, buy just for the way it drives. It really is a pleasure to chuck the C-HR up a twisty mountain road, even if that's a million metaphorical miles from the city and urban driving that Toyota designed it for. The fact that it was engineered by a part-time racer (Koba-san) and entered in the Nürburgring 24-hour race (it finished 84th out of 160...) really shines through. On top of that, it has the best cabin quality and styling in the class and looks great on the outside. It's a shame that the back seats and boot are on the small side, but the eagerness of the 1.2-litre petrol engine helps to make up for that. Some buyers will be put off by the styling and that lack of cargo space, but they'll be the ones missing out.

Hyundai Tucson review
Hyundai Tucson vs. Toyota C-HR 1.2: the king of the Irish car market in 2016, the Tucson is handsome and capable but much less fun to drive than the C-HR.

Nissan Qashqai review
Nissan Qashqai vs. Toyota C-HR 1.2: more practical than the Toyota and almost as engaging to drive, but its cabin can't match the C-HR's quality. 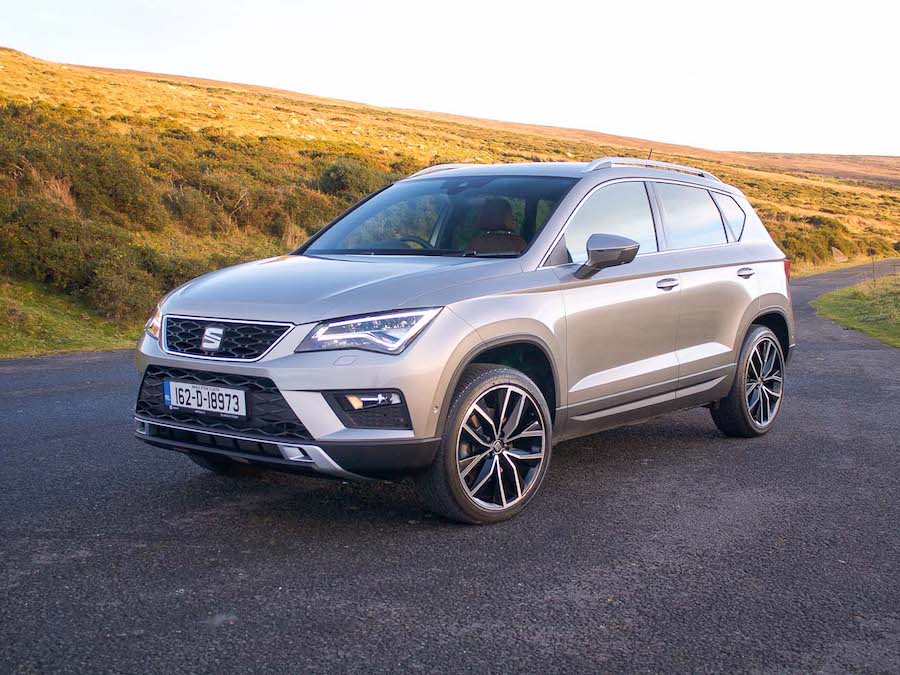 SEAT Ateca 2.0 TDI 4Drive review
SEAT Ateca vs. Toyota C-HR 1.2: much better value than the C-HR and with a cavernous cabin, but it's only ordinary to drive.