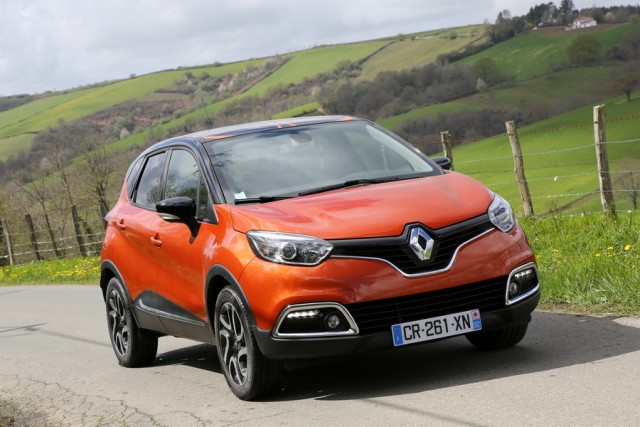 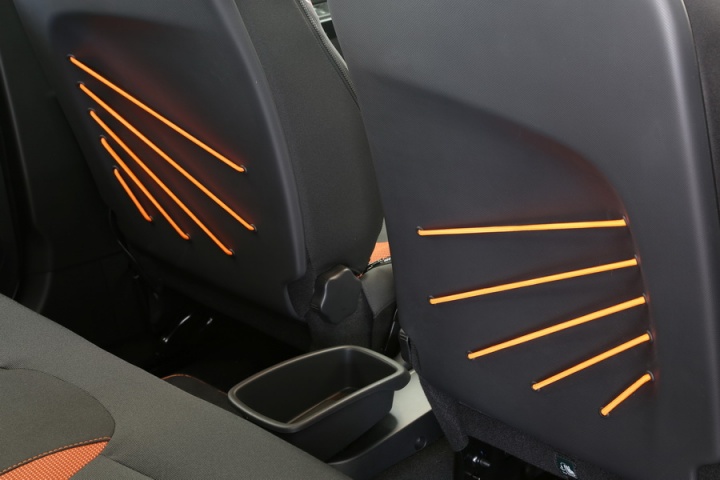 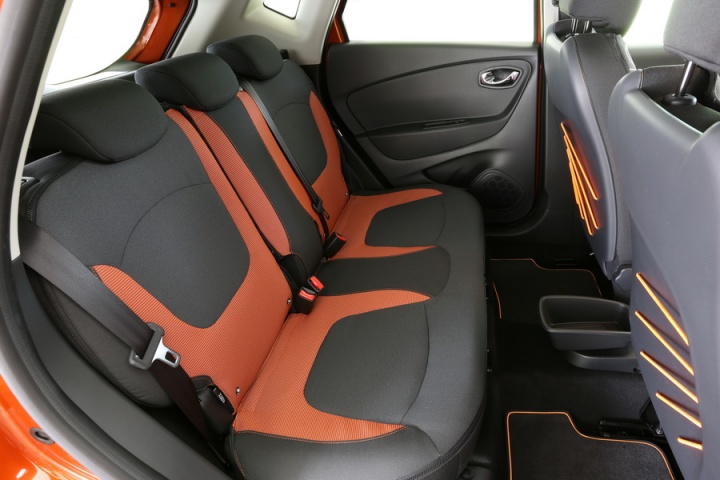 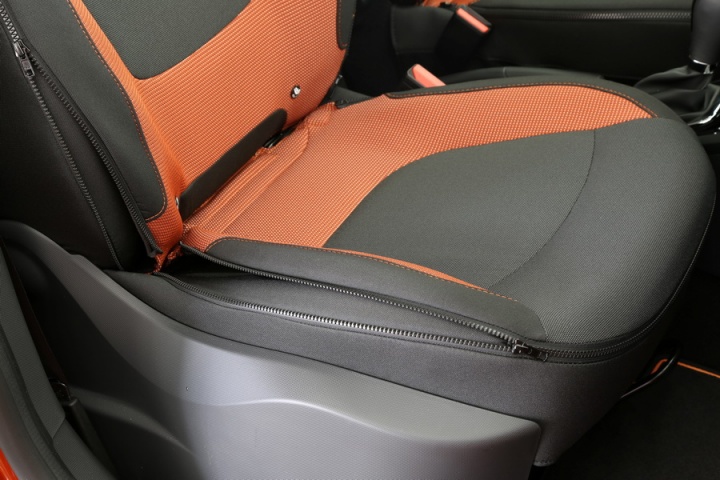 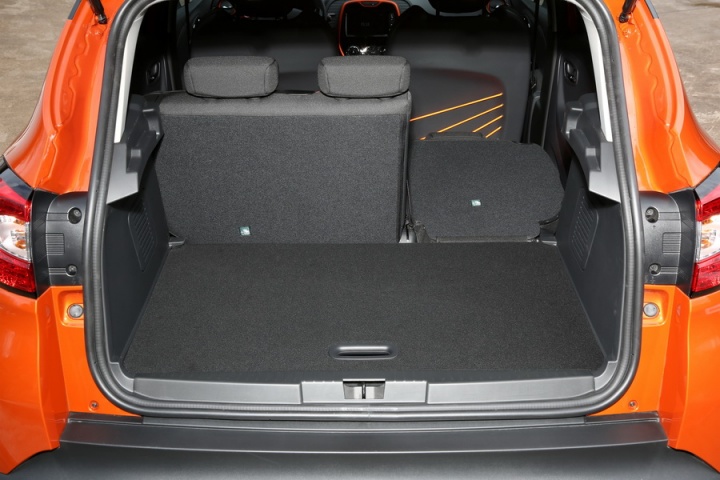 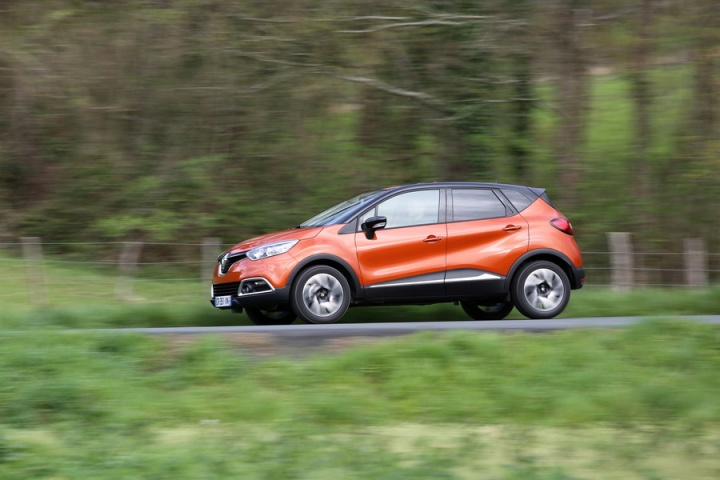 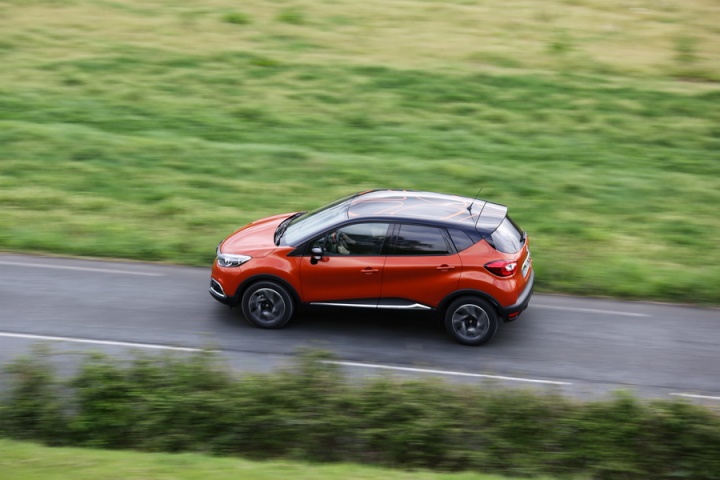 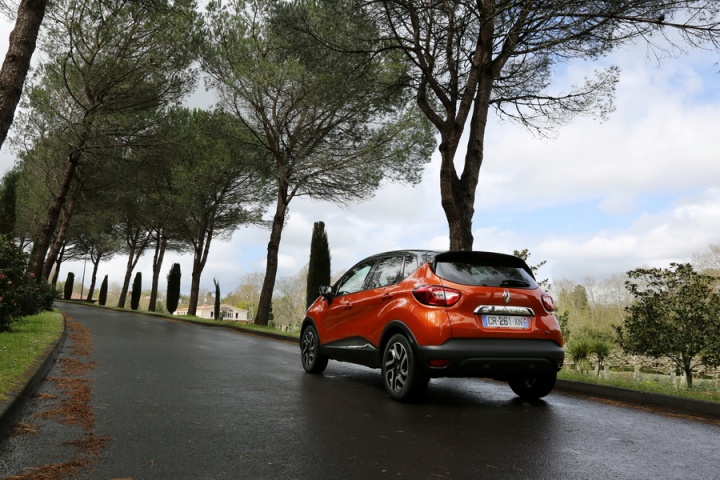 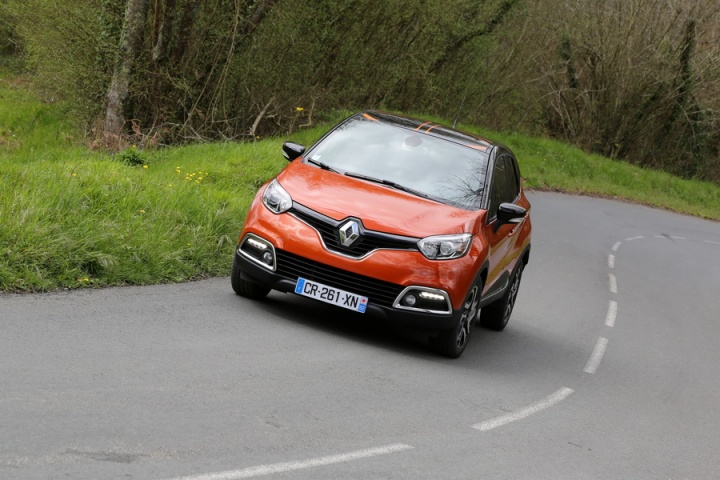 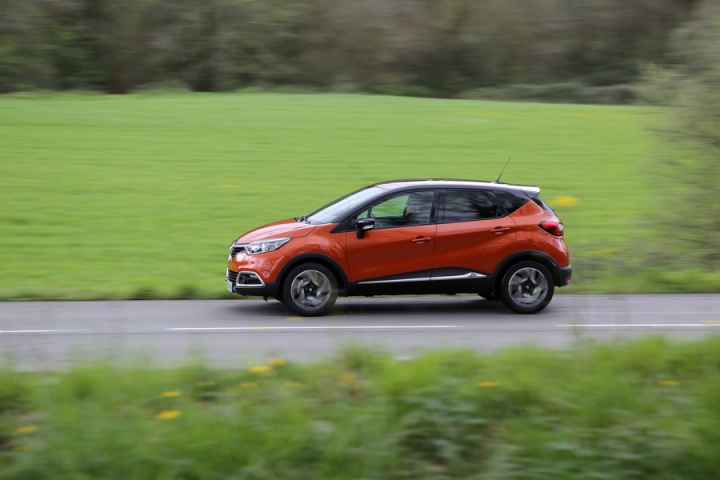 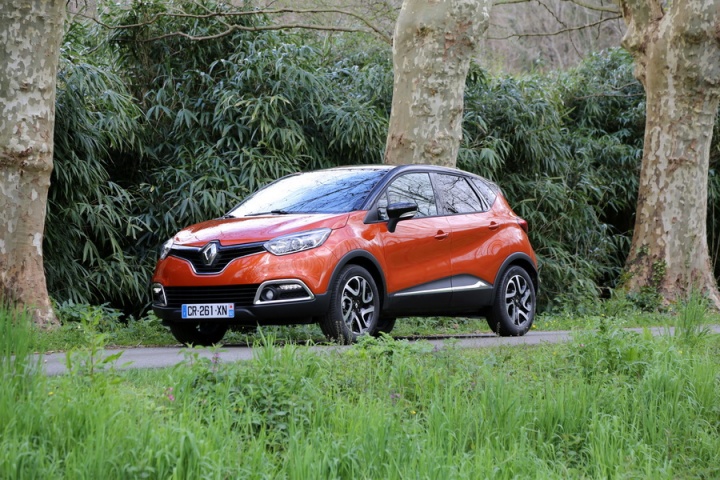 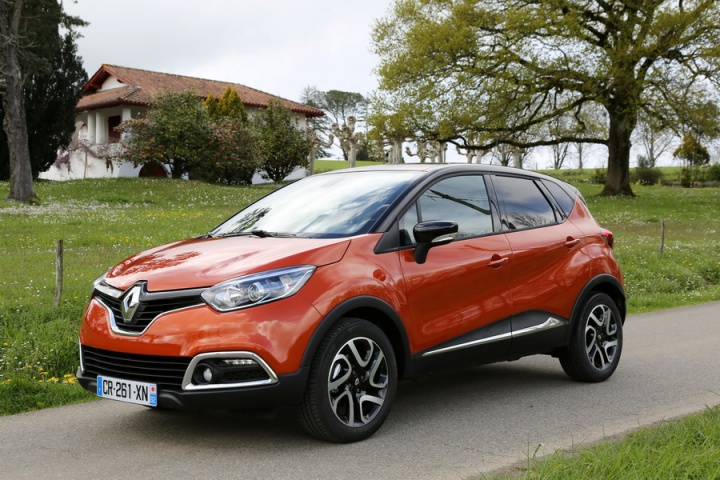 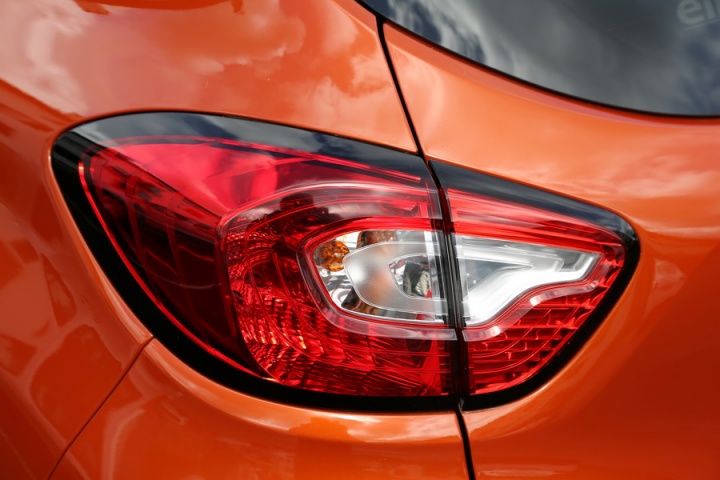 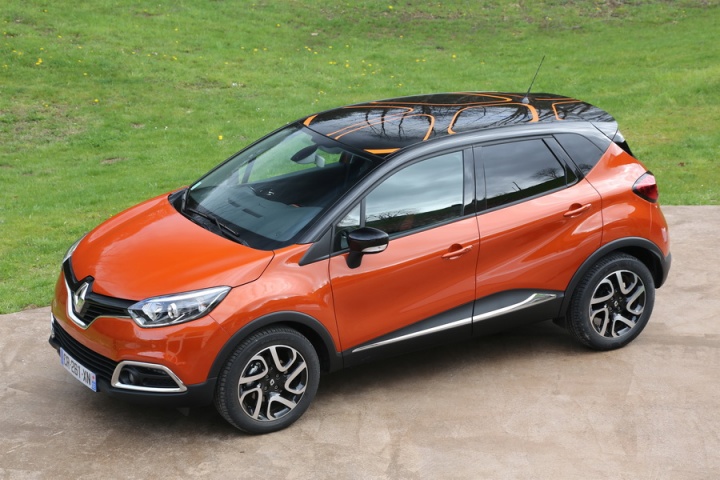 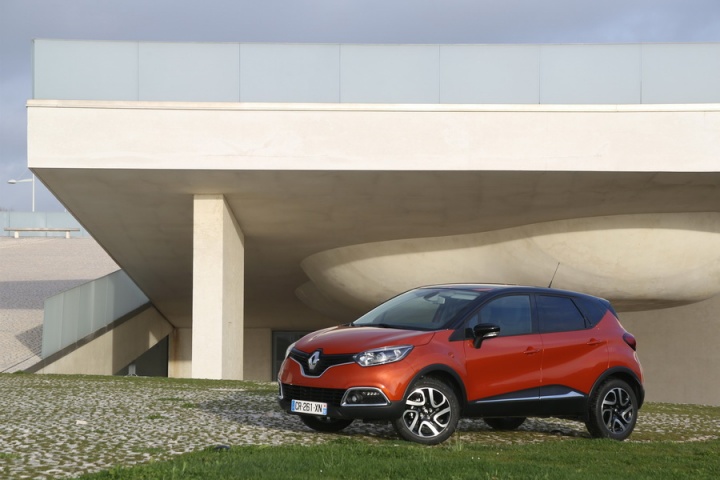 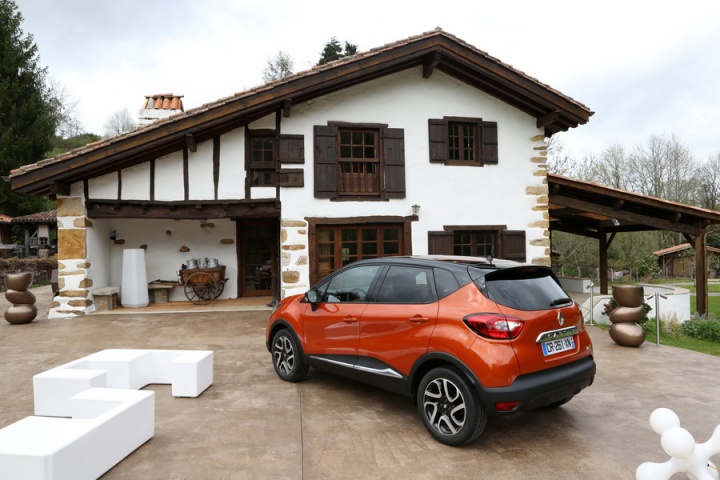 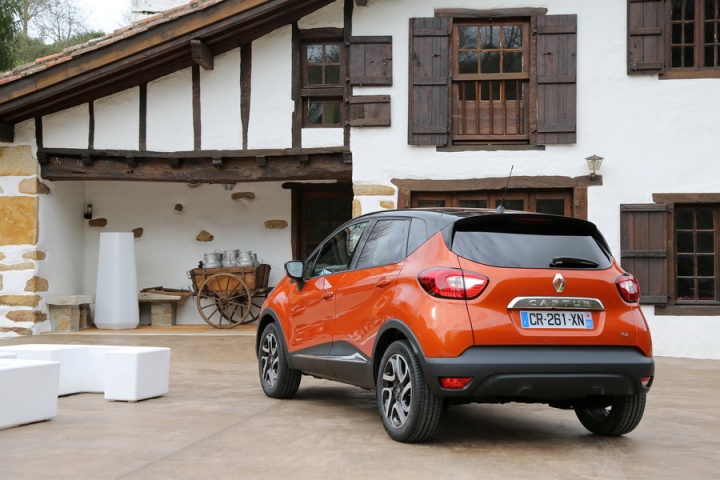 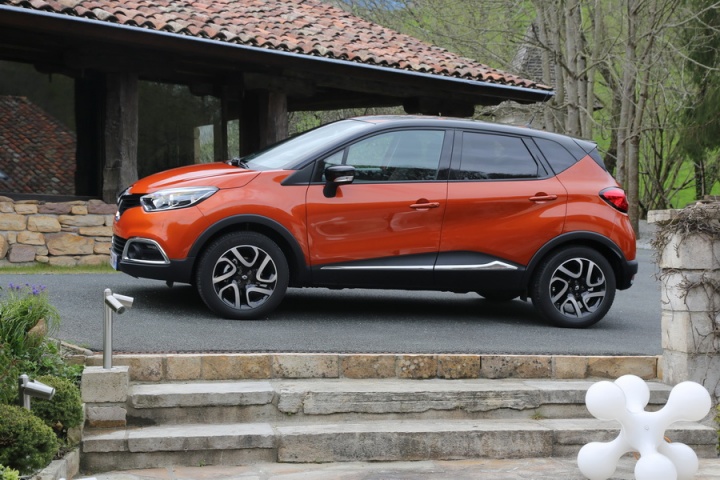 Groovy looking Renault Captur aims to take the Nissan Juke on at its own game.

The Captur is a desperately needed car for Renault with a decimated line-up offering little in the way of choice. The new crossover is expected to be the second biggest seller after the Clio and on first impressions it has a lot going for it. The real test comes when we get our hands on the volume selling diesel.

Stand the Captur beside the almost as new Clio and the concept of the same name that inspired Renault's current design language and the family resemblance is undeniable. From the oversized badge on the grille to the new swept back headlights everything looks good. While the new styling probably suits the Clio a little better the Captur is still a good looking car, especially in the Arizona Orange and contrasting white roof of our test model.

As is the case with the latest 'urban' cars, personalisation is likely to be key to the Captur; everything from the roof colour to the wing mirrors and grille trim can be tailored to suit your taste, but whatever end of the palette you choose to pick from the Captur is a distinctive looking car with muscular haunches in a body only 6cm longer than that of the Clio.

It is inside the Captur that offers the biggest revelation; the slab of grey plastic that used to serve as the dashboard has been binned and in its place is a much more upmarket fascia with elements such as the touchscreen surround, air vents and steering wheel all available in various colours. Parents are likely to be excited by new removable seat covers that can be unzipped and washed should Junior have an accident, but the news that the 11-litre 'Easy Life' drawer (which can hold all the family essentials) will not make it to right-hand drive may disappoint. The architecture behind the dashboard would not allow the filing cabinet style drawer to carry over meaning we have to make do with a conventional five-litre glove box. You do get a lot of storage spaces however, including deep door pockets, a useful cubby atop the dash and a boot that at its maximum can hold 1,388 litres (rear seats folded) and a useful 724 litres with the movable rear seats in their rearmost position. There is also an 85-litre under-floor compartment in which to keep valuables away from prying eyes.

There has been a lot of talk about the Captur being based on the Nissan Juke platform. Considering the alliance between the two companies this would probably be a fair assumption, but according to the Renault engineers at the Captur's launch, the Juke platform did not suit the plans for the Captur and so the new Clio base has been utilised. This does mean that there will be no four-wheel drive option (the Clio platform was not designed for one), but it also gives the Captur an advantage in the handling stakes.

Sitting 200mm higher than the Clio there is a degree of body roll while cornering, but never enough to unsettle the car, and the alternative of stiffening the suspension to compensate would have left a busy ride. As it is the ride is a good compromise; it offers safe, predictable handling but with limited feel through the wheel, which may not encourage you to push on. But then, the new crossover is aimed at the family rather than enthusiast buyer.

The 120hp 1.2-litre TCe engine driven here will not be offered in Ireland (review of 1.5 dCi to follow shortly), but it does give us a good benchmark to gauge the 90hp version that will make it to our shores. While the lower powered unit works commendably in the Clio the extra 100kg of weight that the Captur carries can be felt; at speed it will cruise happily but even with two up front it can struggle with inclines. This feeling is not helped by a dual-clutch EDC automatic transmission that changes up without taking advantage of the petrol engine's power higher up the rev range. The 90hp dCi diesel will be offered with this transmission too and due to the more accessible torque it should work better with that engine.

Irish prices are yet to be announced but it is expected the Captur will undercut its Nissan cousin that starts from €19,095. Two trim levels will be offered - Life and Intense - with 16-inch alloy wheels, 'Zip Collection' seat covers, cruise control, Bluetooth/USB connectivity and Hill Start Assist included as standard. Intense models will benefit from a seven-inch colour touchscreen with which to control satellite navigation, media and your phone from. The optional R-Link system (available from 2014) adds the ability to send and receive emails, check Twitter and download apps from the R Link store.

While there will be no four-wheel drive version of the Captur Renault bosses have hinted at the possibility of a hot Renaultsport model. No official word yet but it is known that an RS variant that would do battle with the MINI Countryman JCW and Nissan Juke Nismo 'is being considered'.

In the quirky stakes that have served the Juke so well the Captur scores highly. A high level of personalisation will attract buyers while innovative interior solutions such as the removable seat covers will appeal to family drivers. For the moment though the jury is still out - the drivetrain driven here did not inspire confidence. Even if it did come to Ireland, the dCi option is likely to be the most popular.