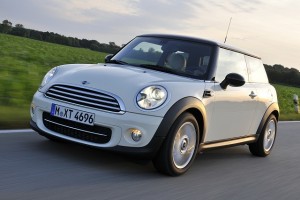 Revisions to the MINI range, including ultra-clean diesel engines, arrive in September; we've driven it.

2011 marks the 10th anniversary of the MINI range and in time for this there has been a refresh to the current model. Some of the changes are a case of 'blink and you will miss them', but new clean diesels are a highlight that will push down running costs.

The changes aren't immediately obvious. There is a new front bumper aimed at being kinder to any pedestrians you might run over. The air intakes have been redesigned too. Xenon lights are now available as an option, as are adaptive headlights.

At the rear, the reversing lights and foglamps are now located in the lower section of the bumper. LED lighting technology has been added to the brake lights too. There have also been some subtle revisions to the rear of the Clubman model - a wider opening between the two rear tailpipes in the Cooper S model to be exact. New paint colours are offered as well, including British Racing Green II, Spice Orange and Eclipse Grey for the Cooper S. Ice Blue will be available at a later stage.

Inside, newly designed controls for the audio and air conditioning systems and lots of new interior trim options sum up the update. New features are also available. One notable item is MINI Connected, which allows for connection of devices such as the iPhone to the car, enabling users to play internet radio through the audio system and to have Twitter messages and RSS news feeds read out loud. We tried this and it works very well, listening to Today FM in the heart of Bavaria. This might be an expensive option though at an estimated €1,200 packaged together with the Visual Boost information screen.

The big news surrounds what is under the bonnet, where the addition of a revised diesel engine means that emissions on the One D and Cooper D models have dropped down to 99g/km, while fuel economy is an impressive 3.8 l/100km on the combined cycle (74.3mpg in old money). The One D comes with 90hp and the Cooper D with 112hp and these now should start to become stronger sellers in our market. Prices start at €20,110 for the MINI One diesel models, and €22,360 for the MINI Cooper D models.

We tried three variants of the MINI, all with the new diesel engine and it is really impressive. The 112hp version is whisper-quiet and feels quite urgent too. We don't really have to tell you at this stage that this is a very fun car to drive and there is no change to this. The big change is to the extra refinement and quietness from the diesel engine.