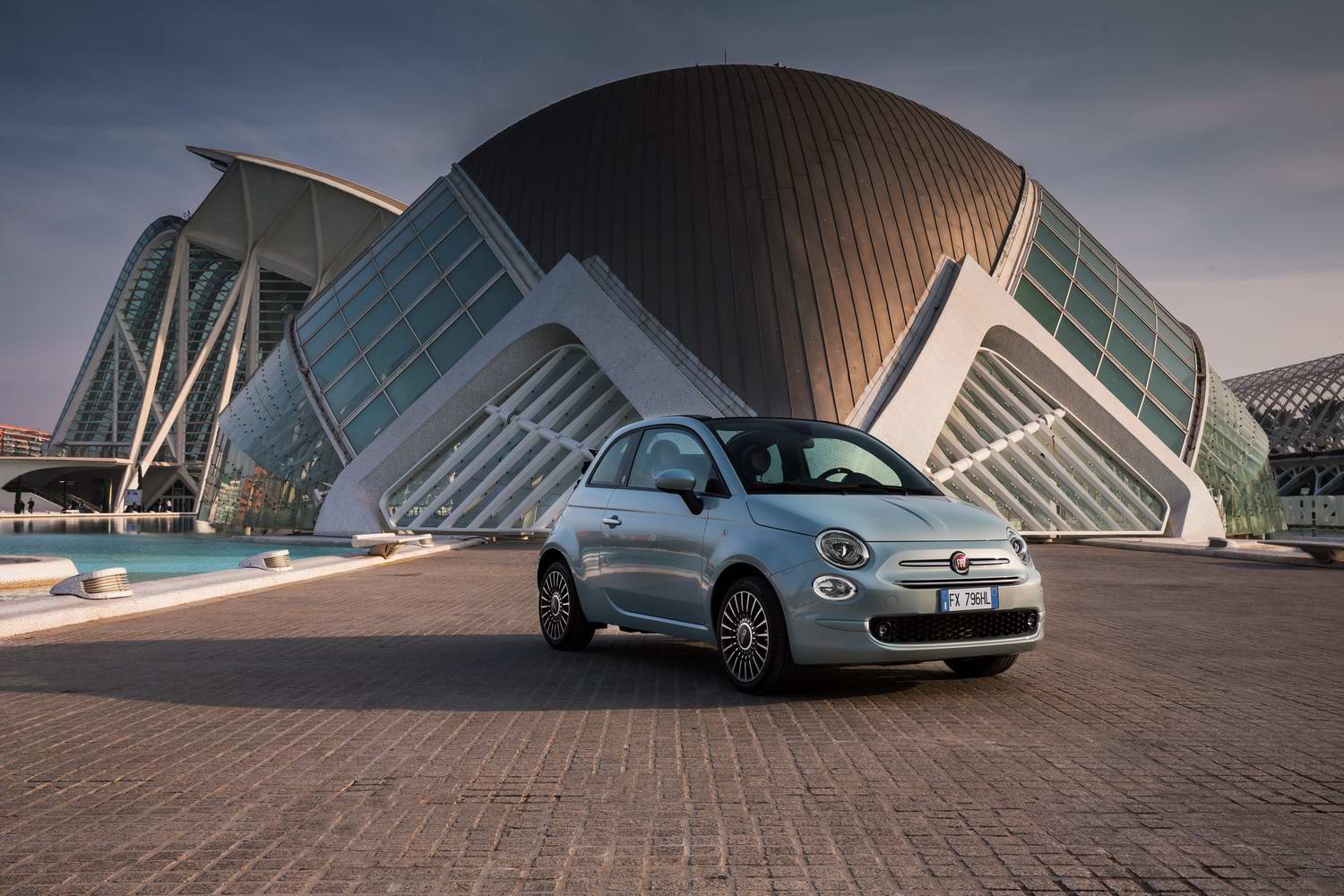 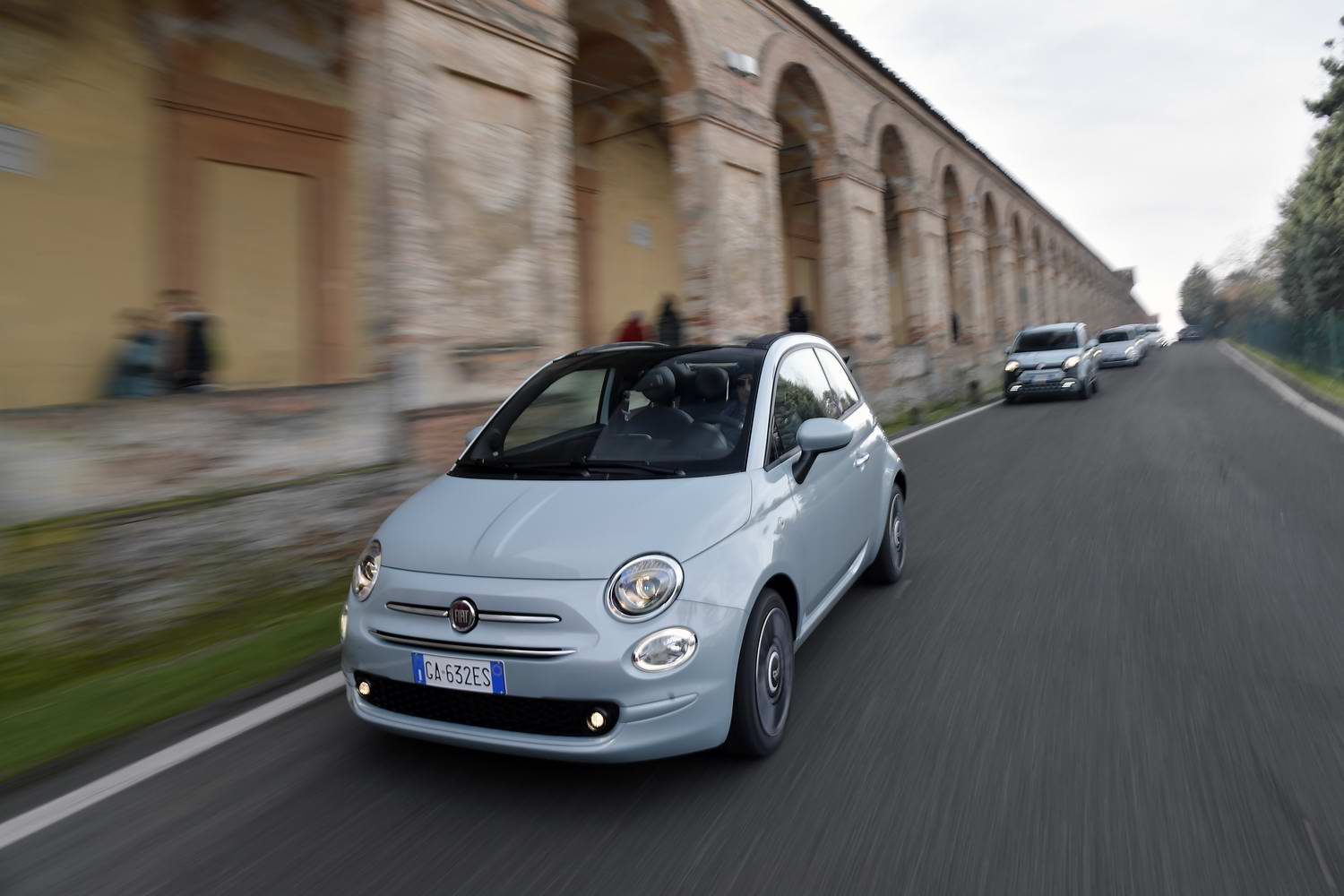 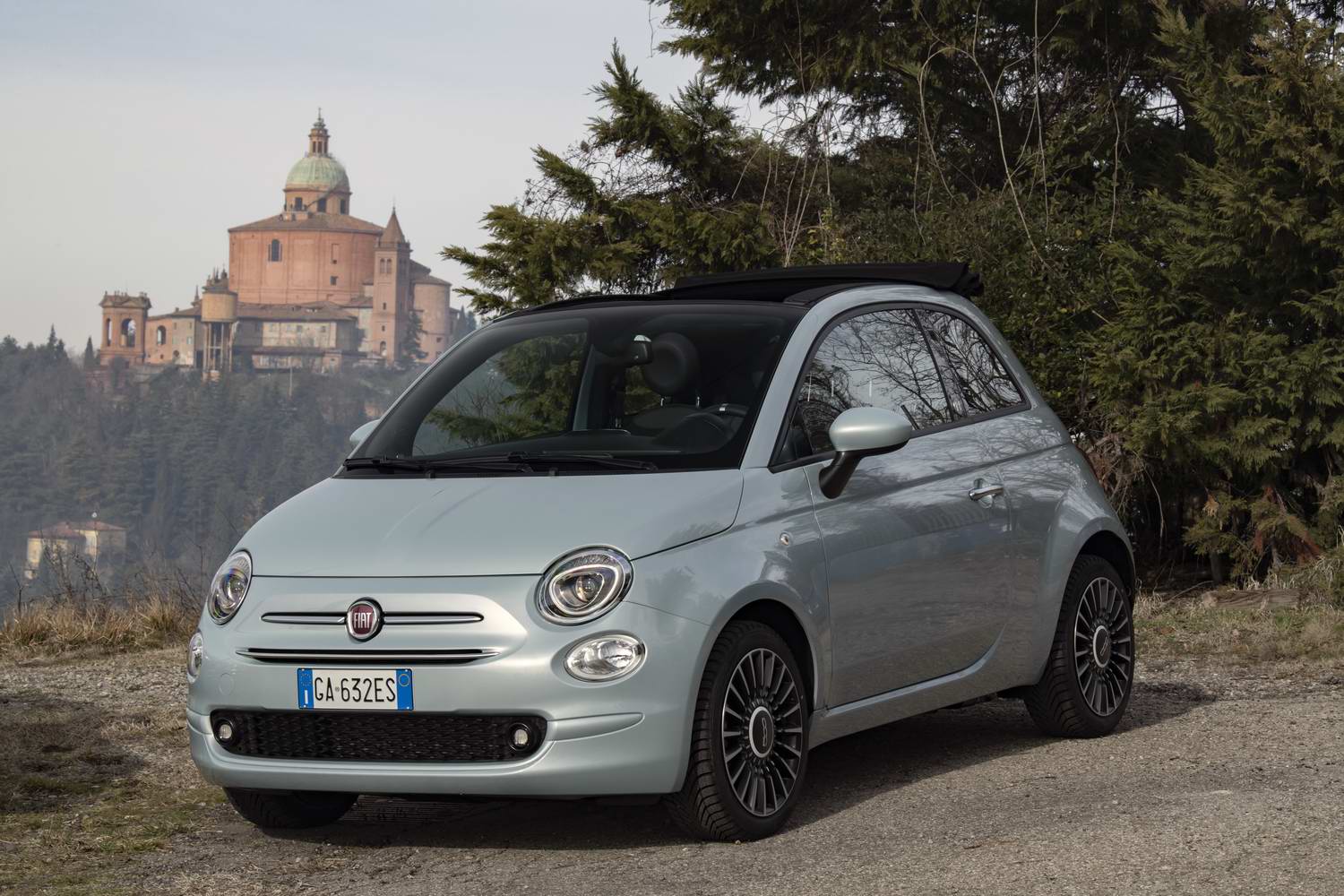 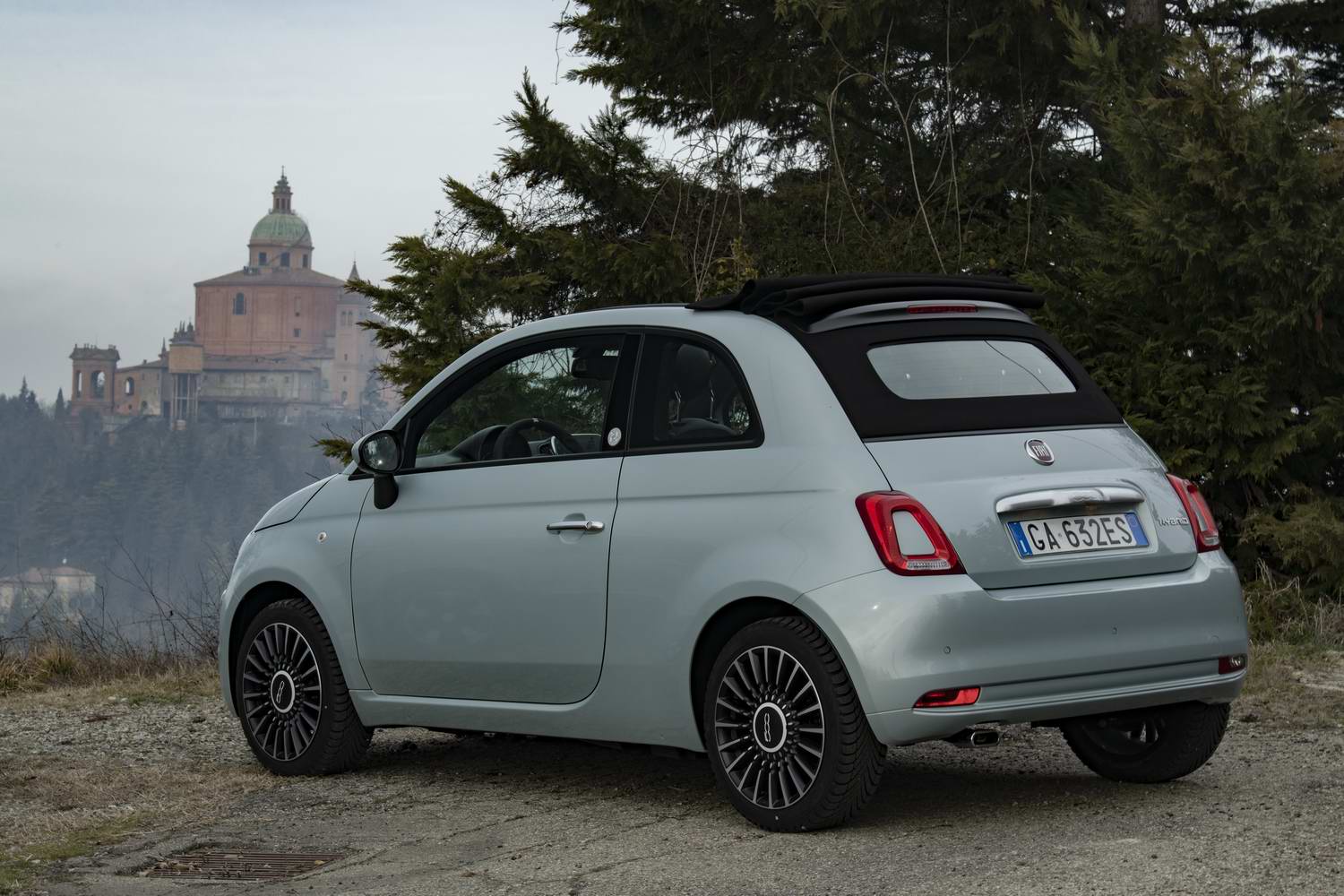 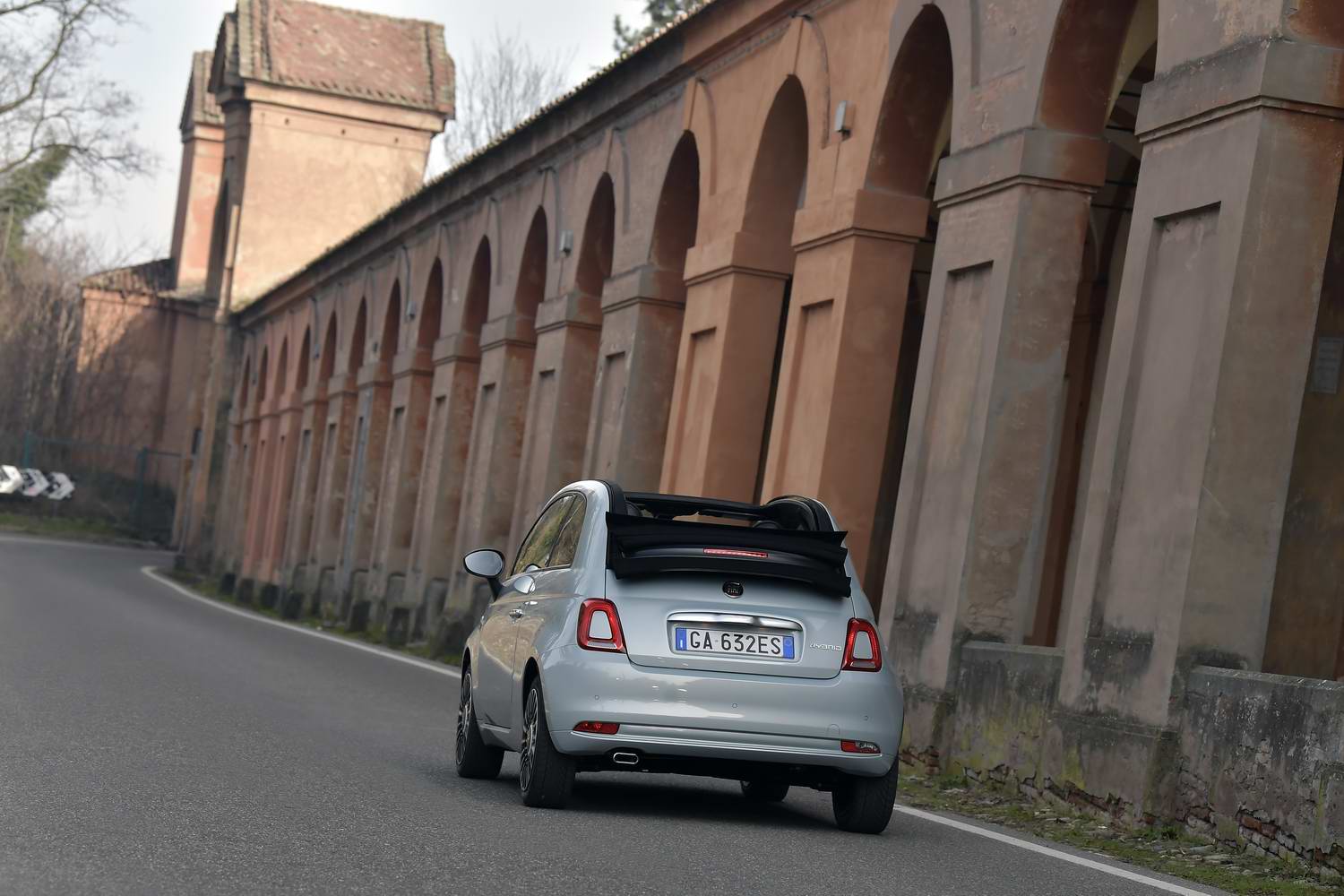 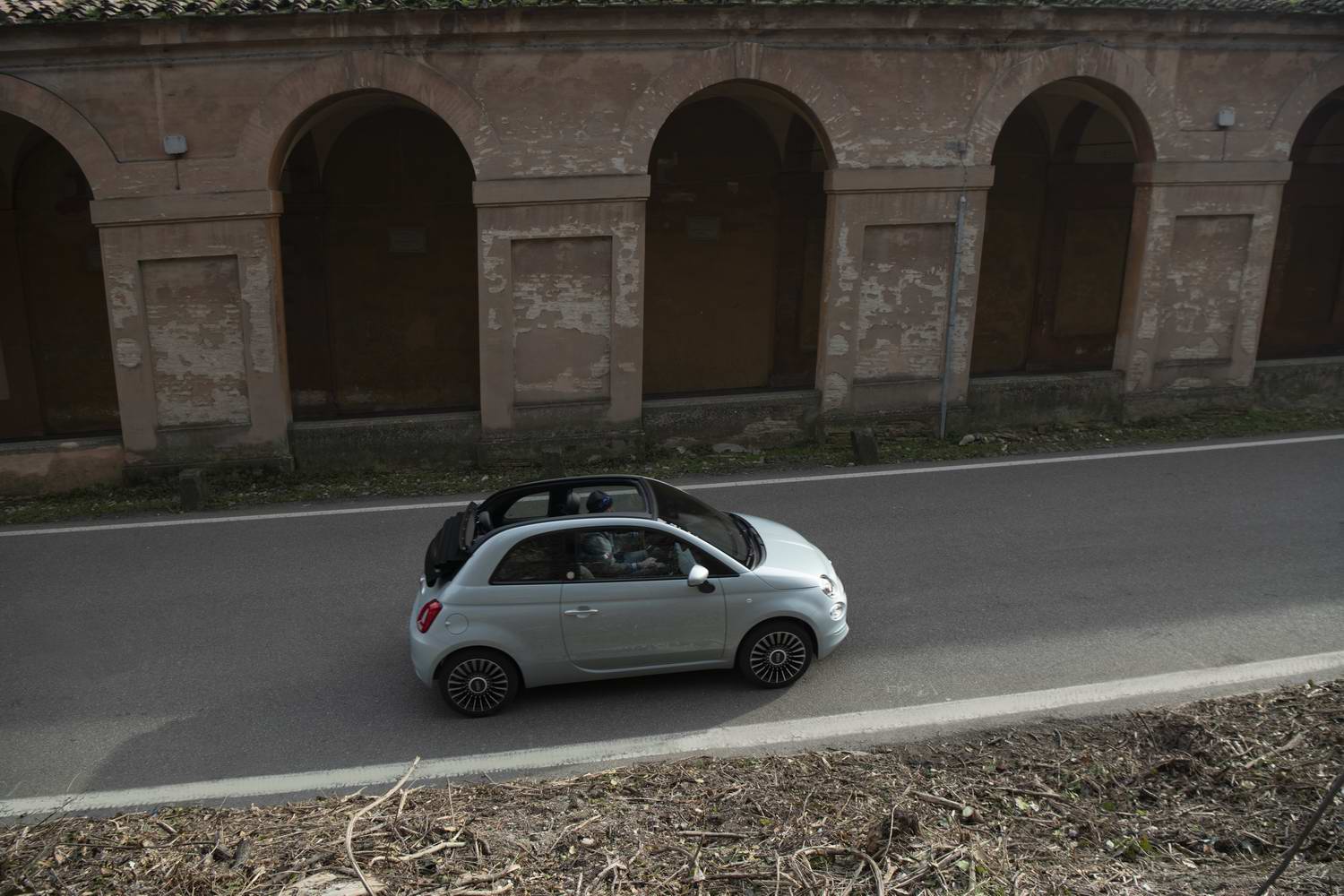 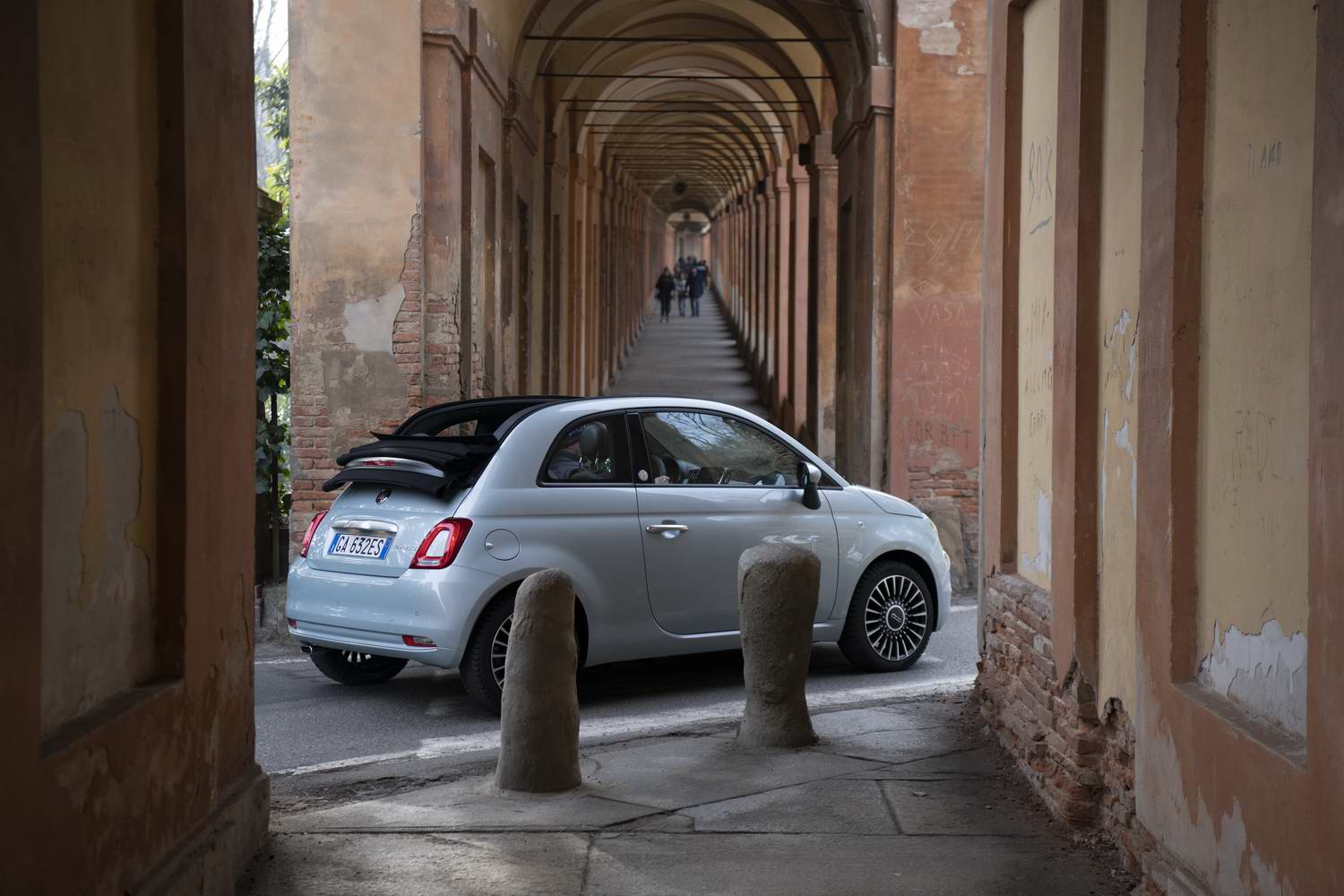 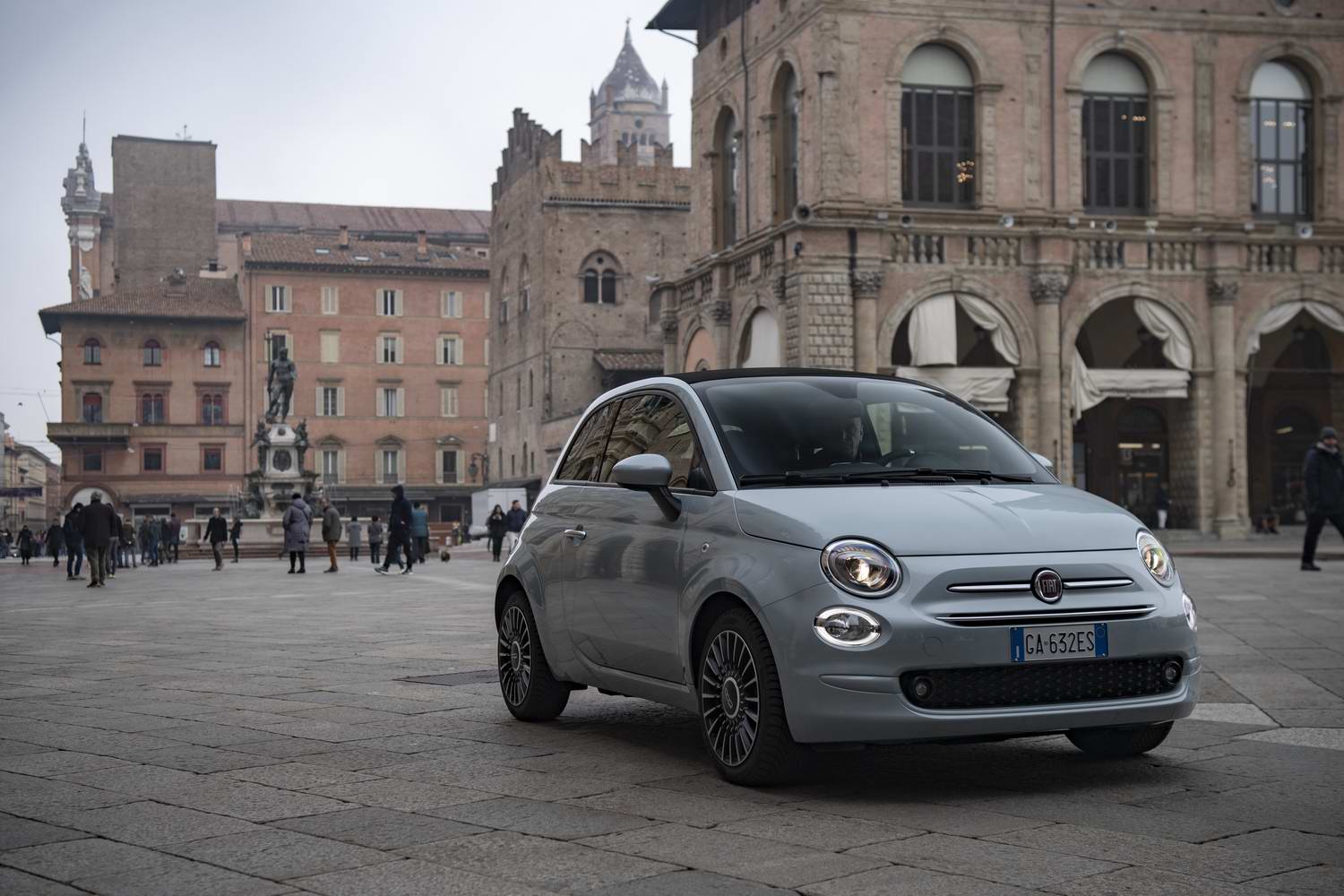 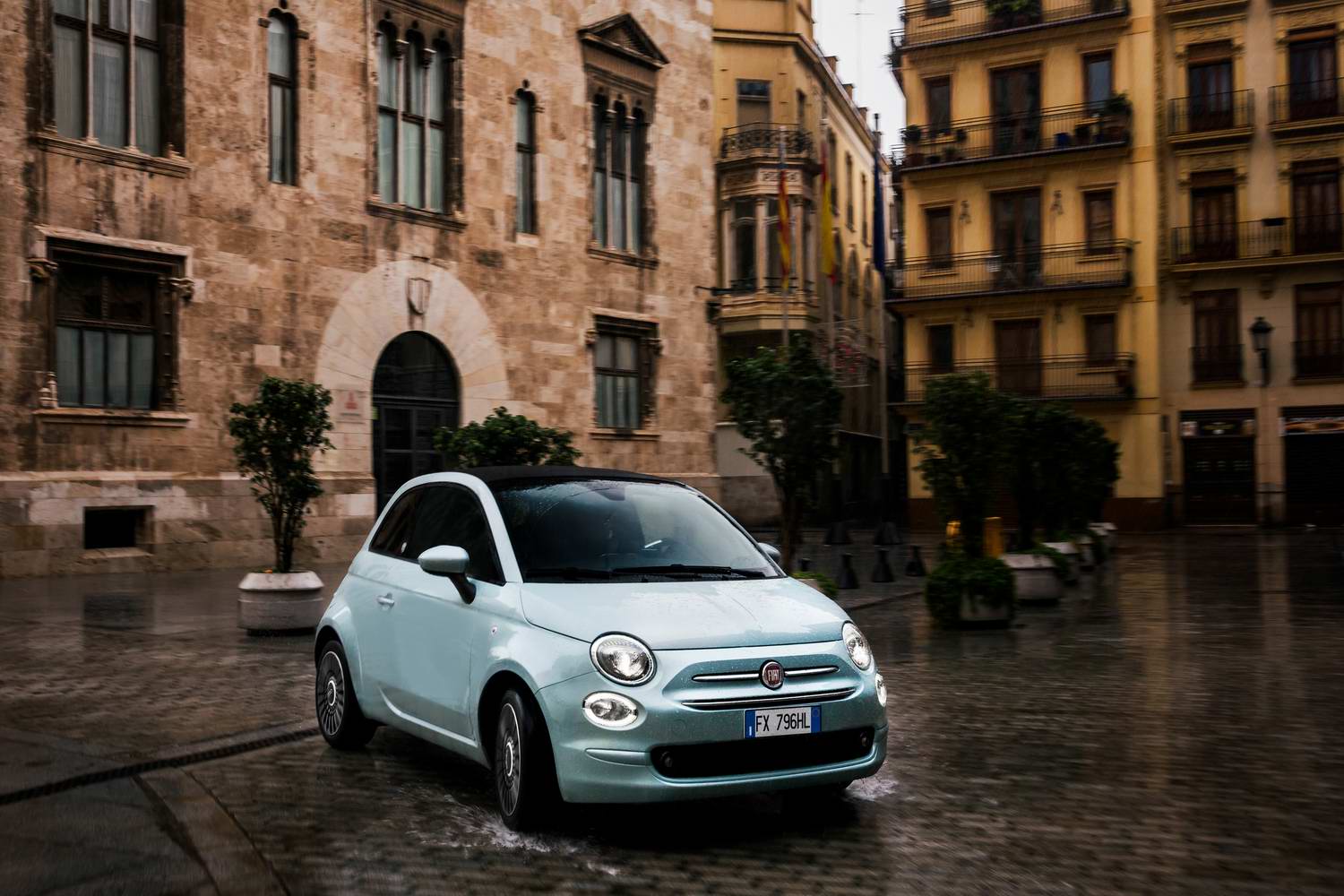 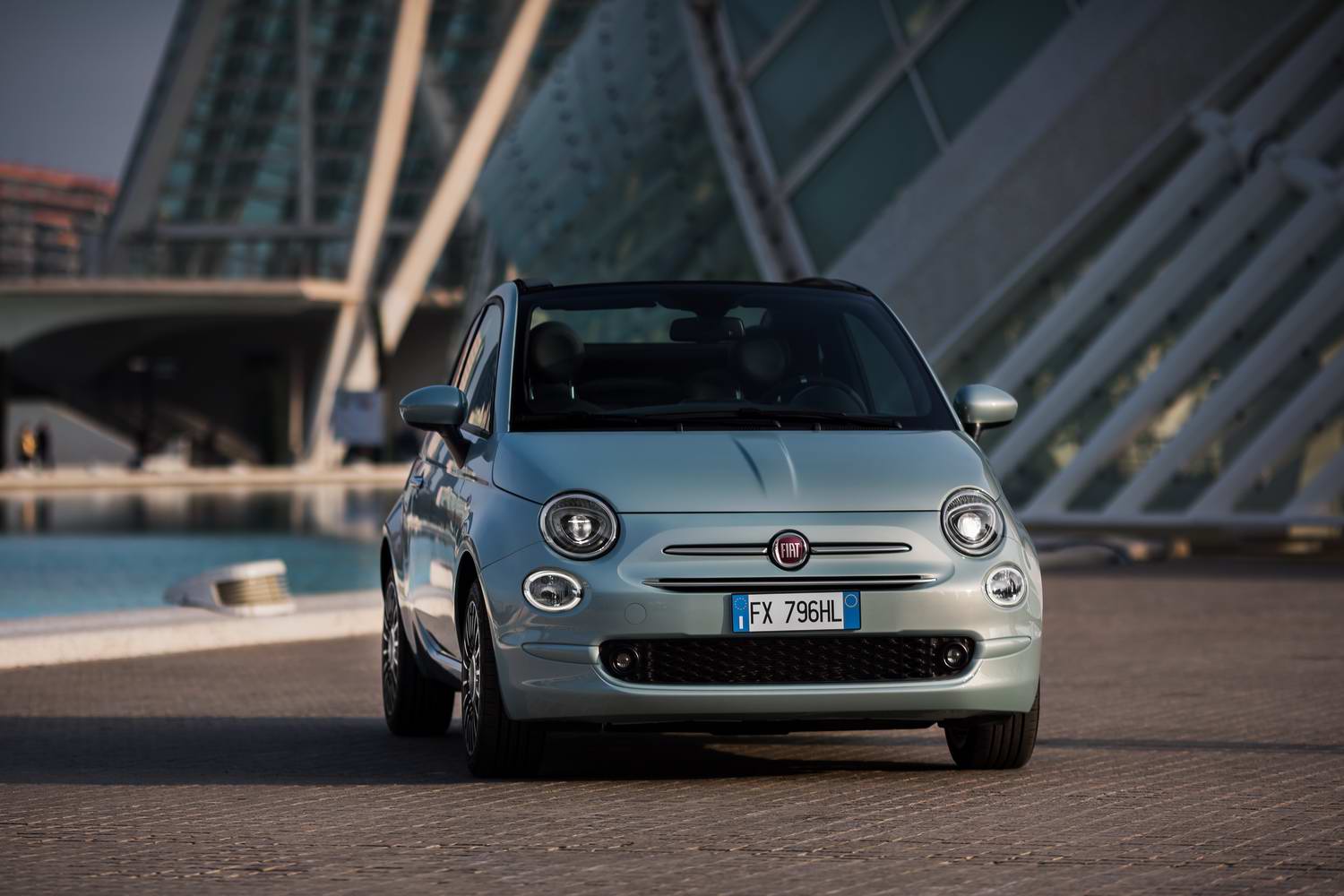 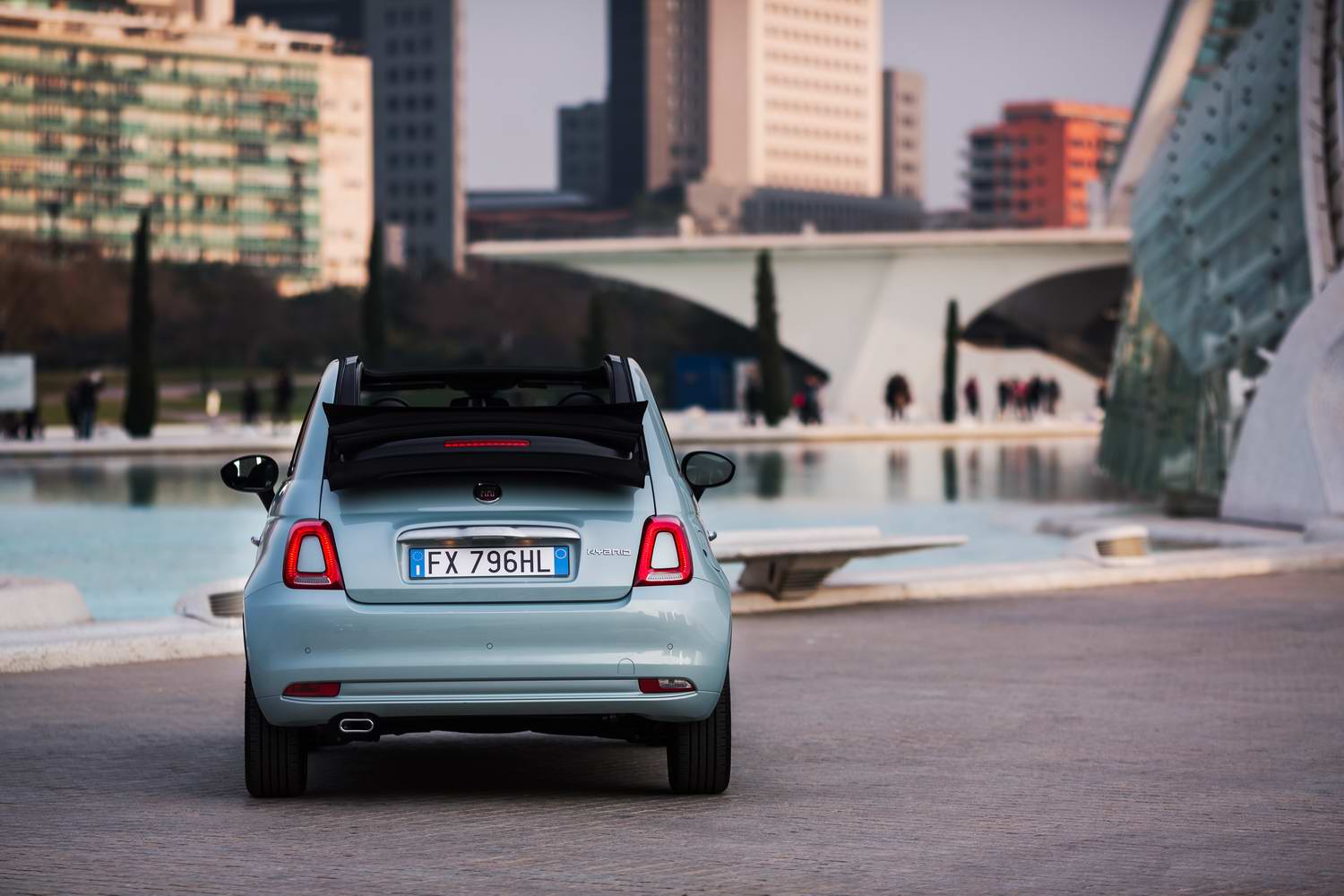 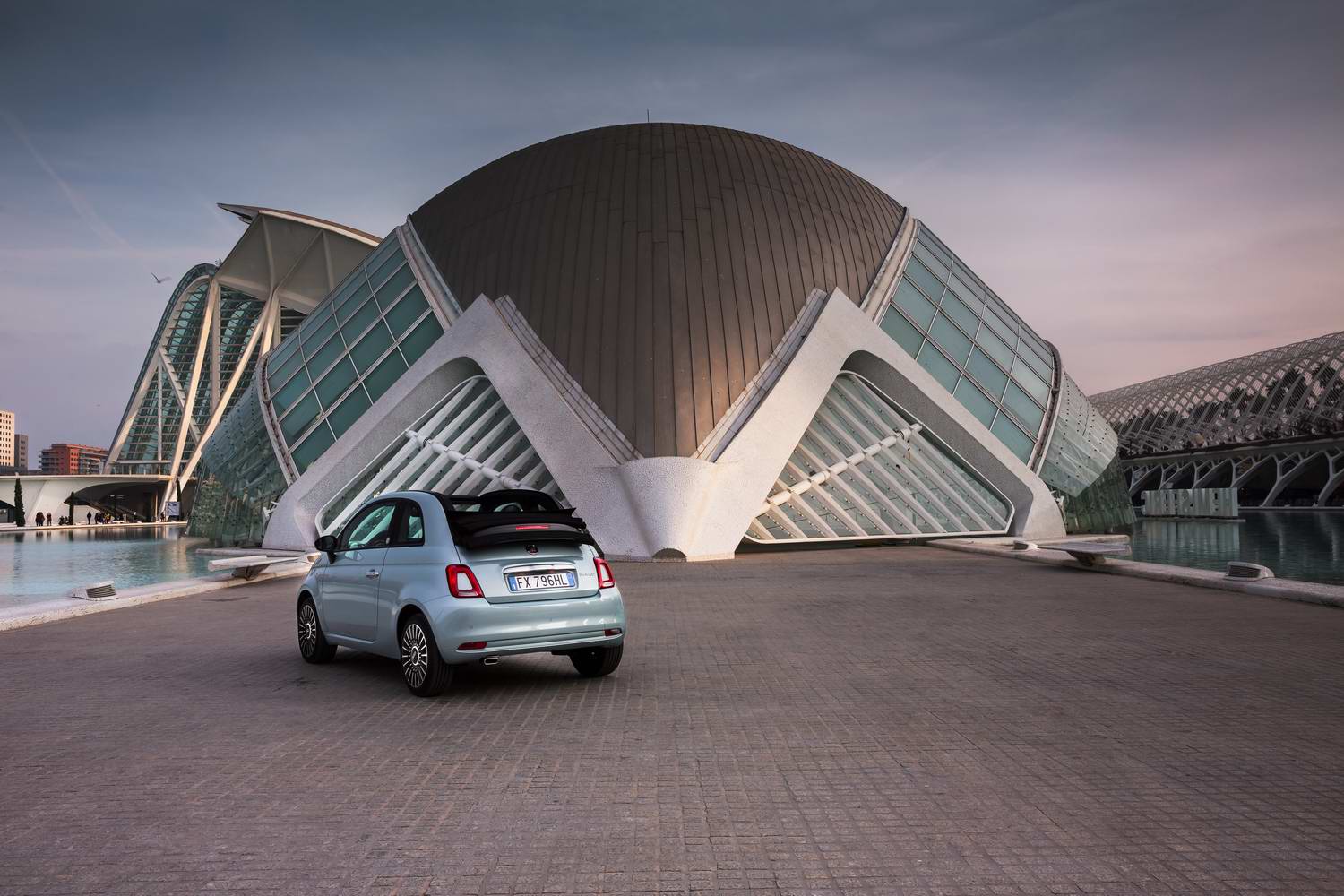 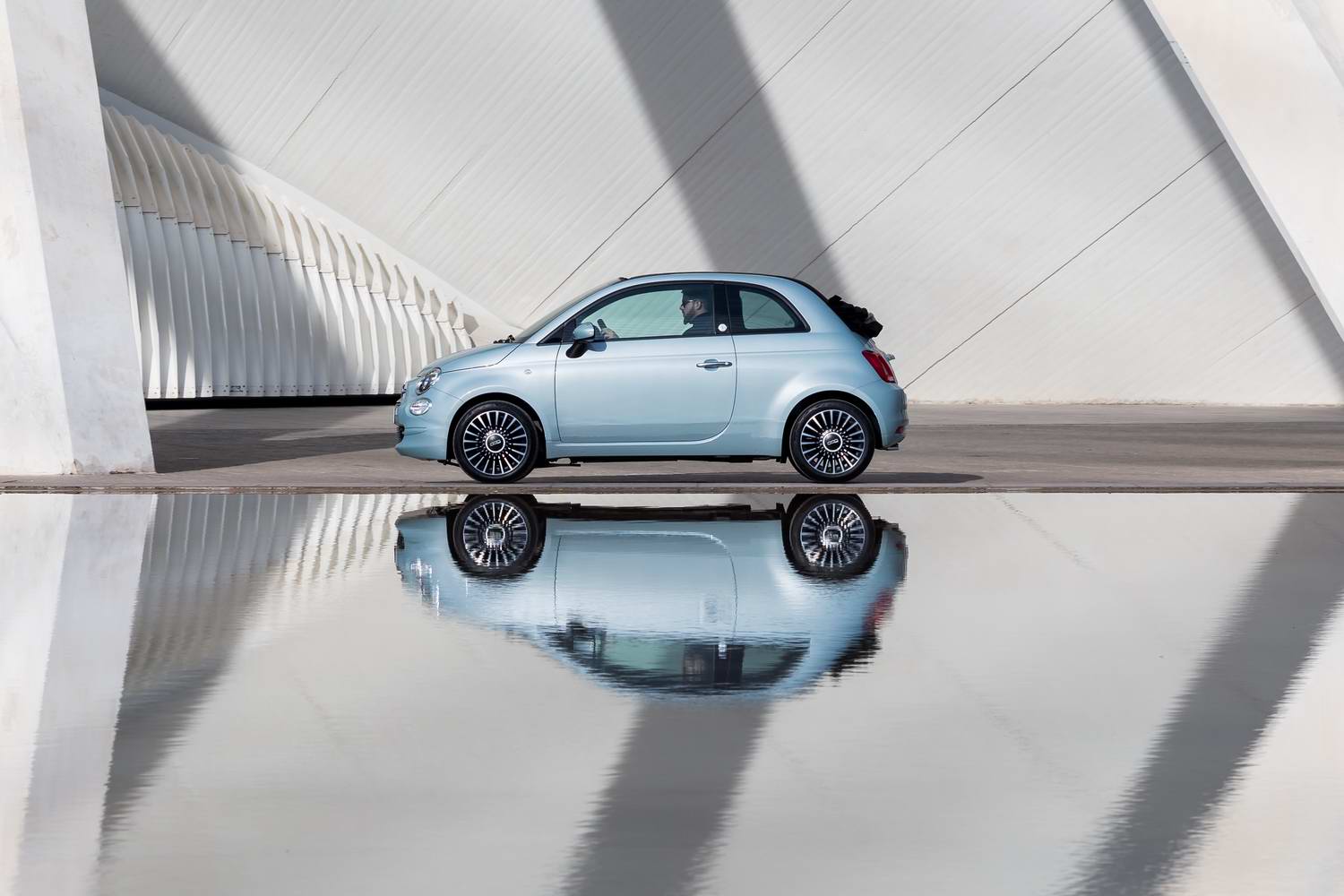 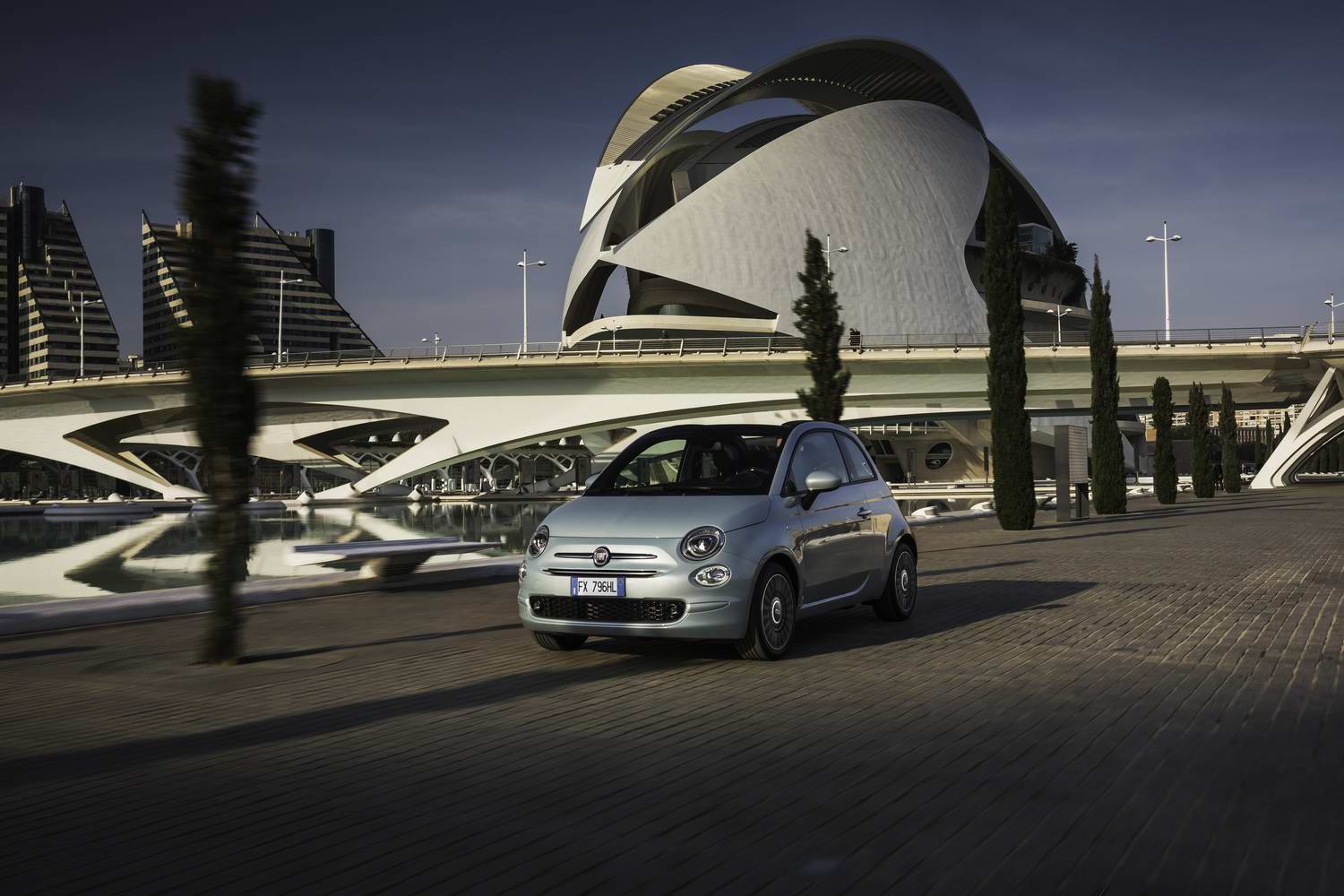 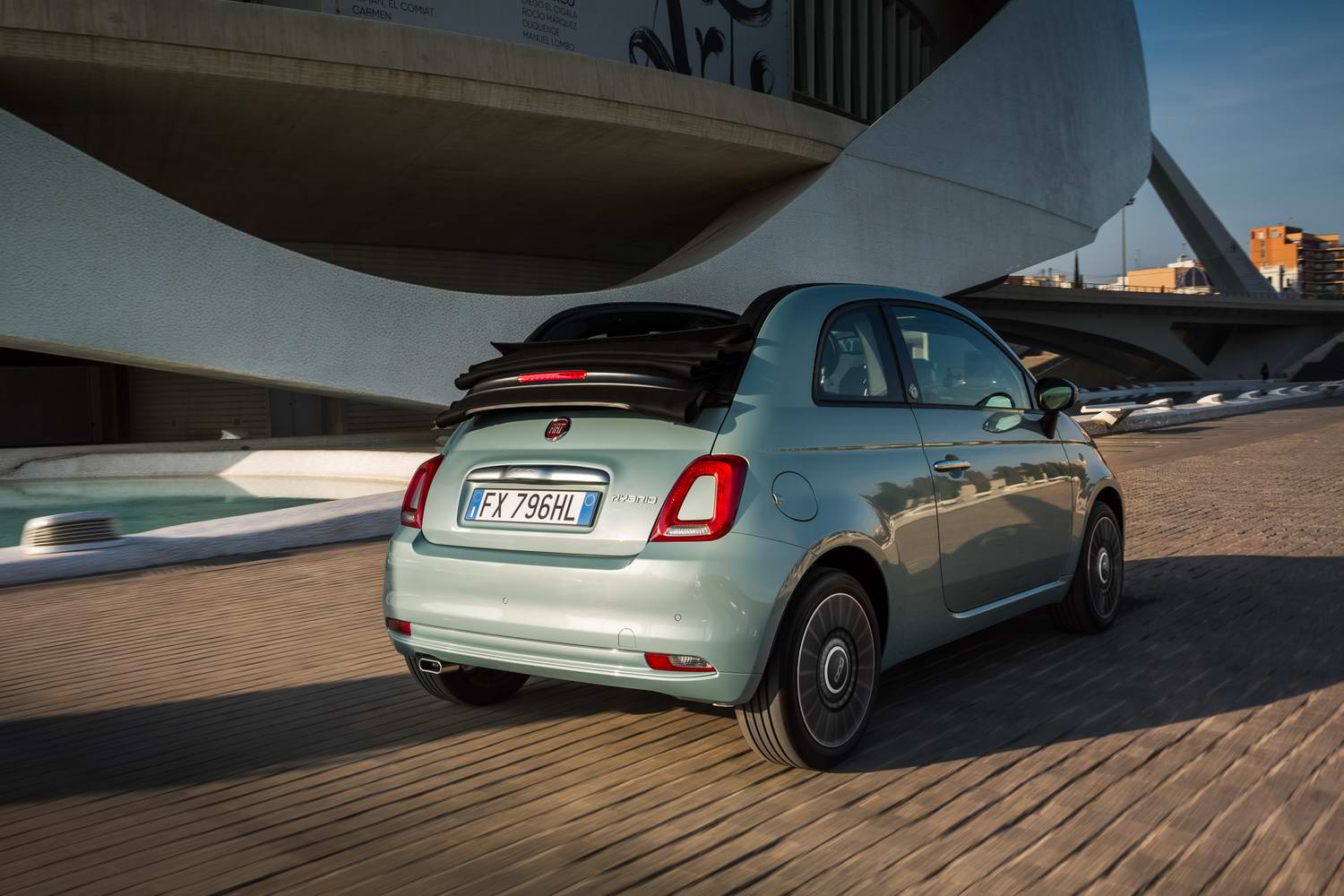 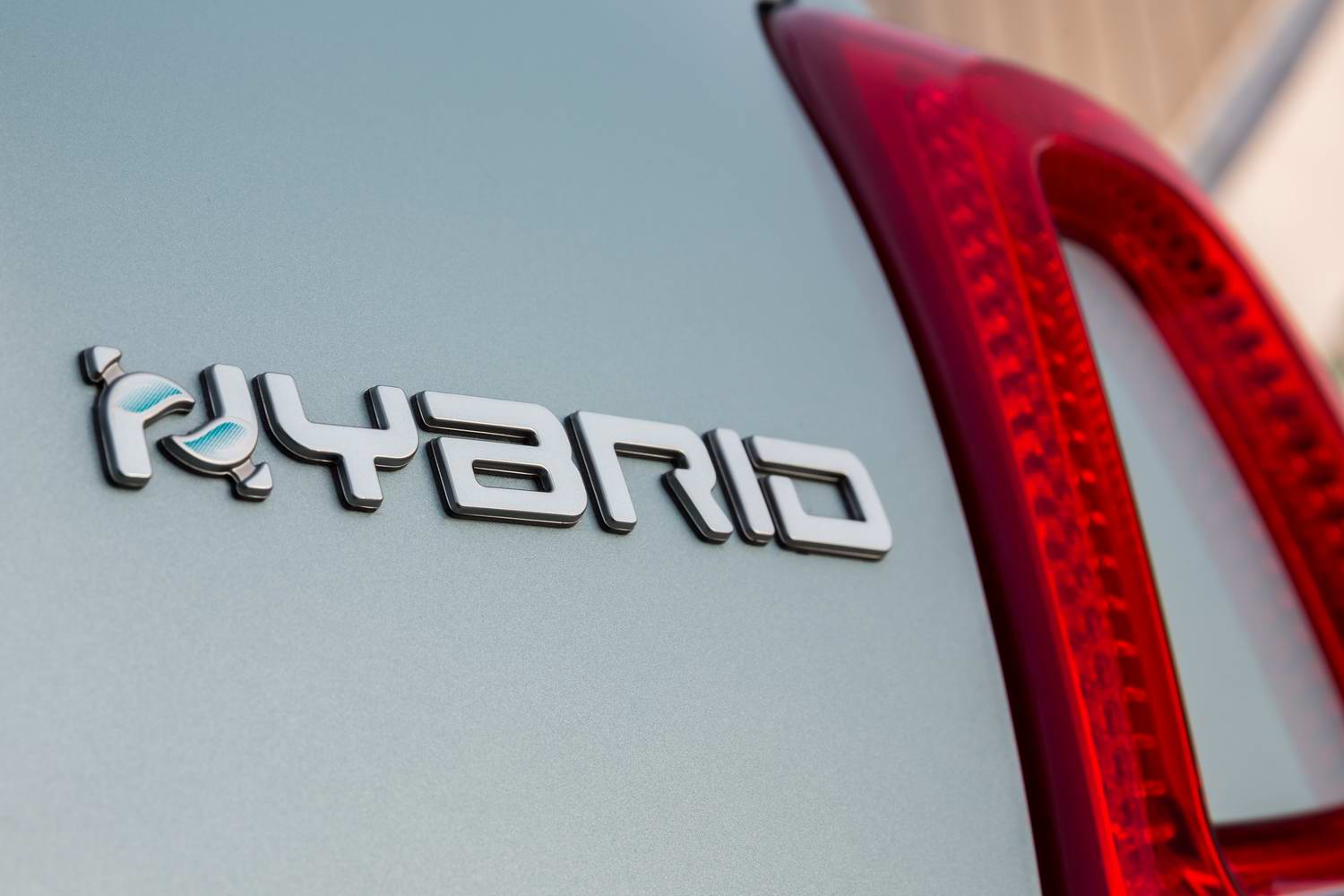 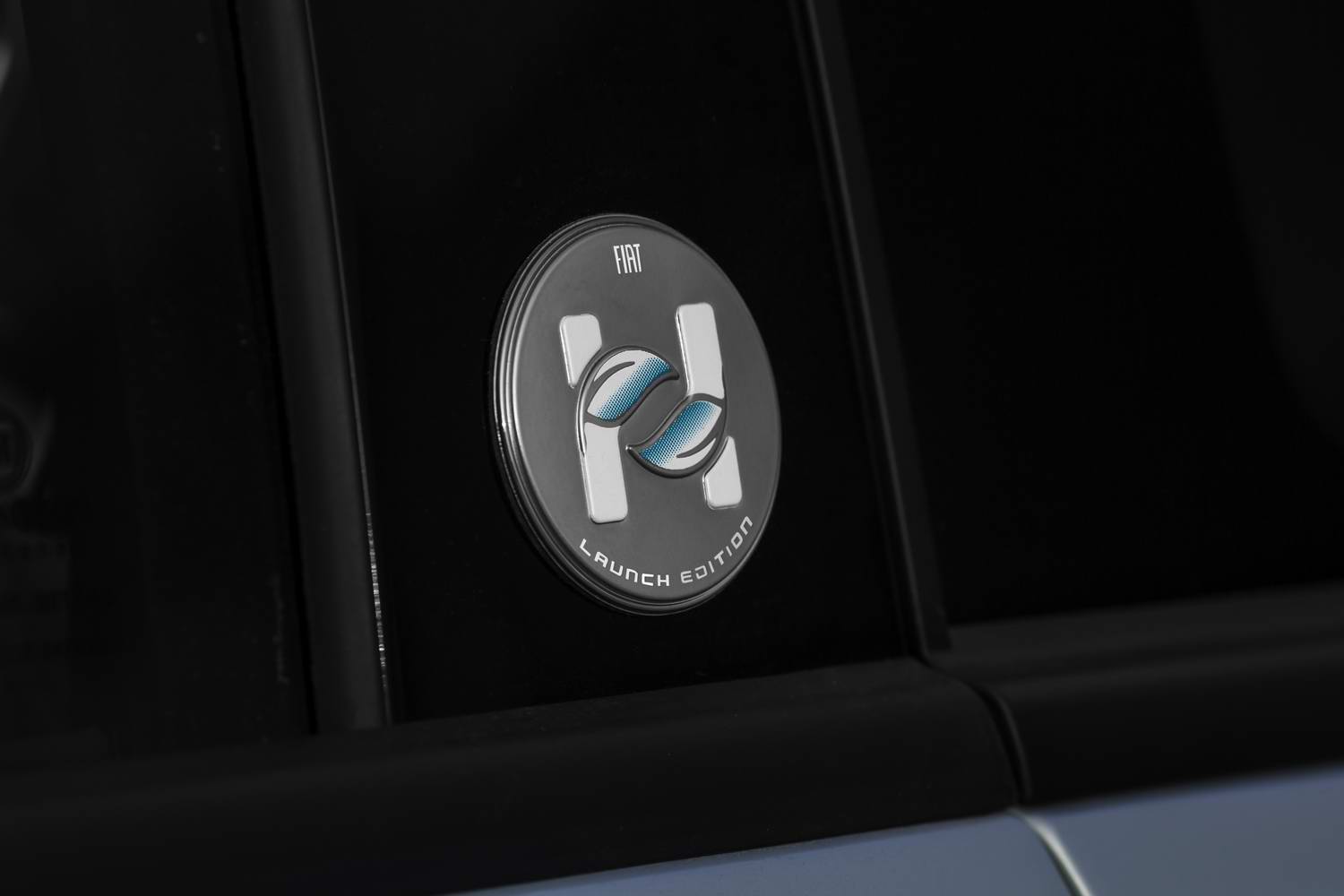 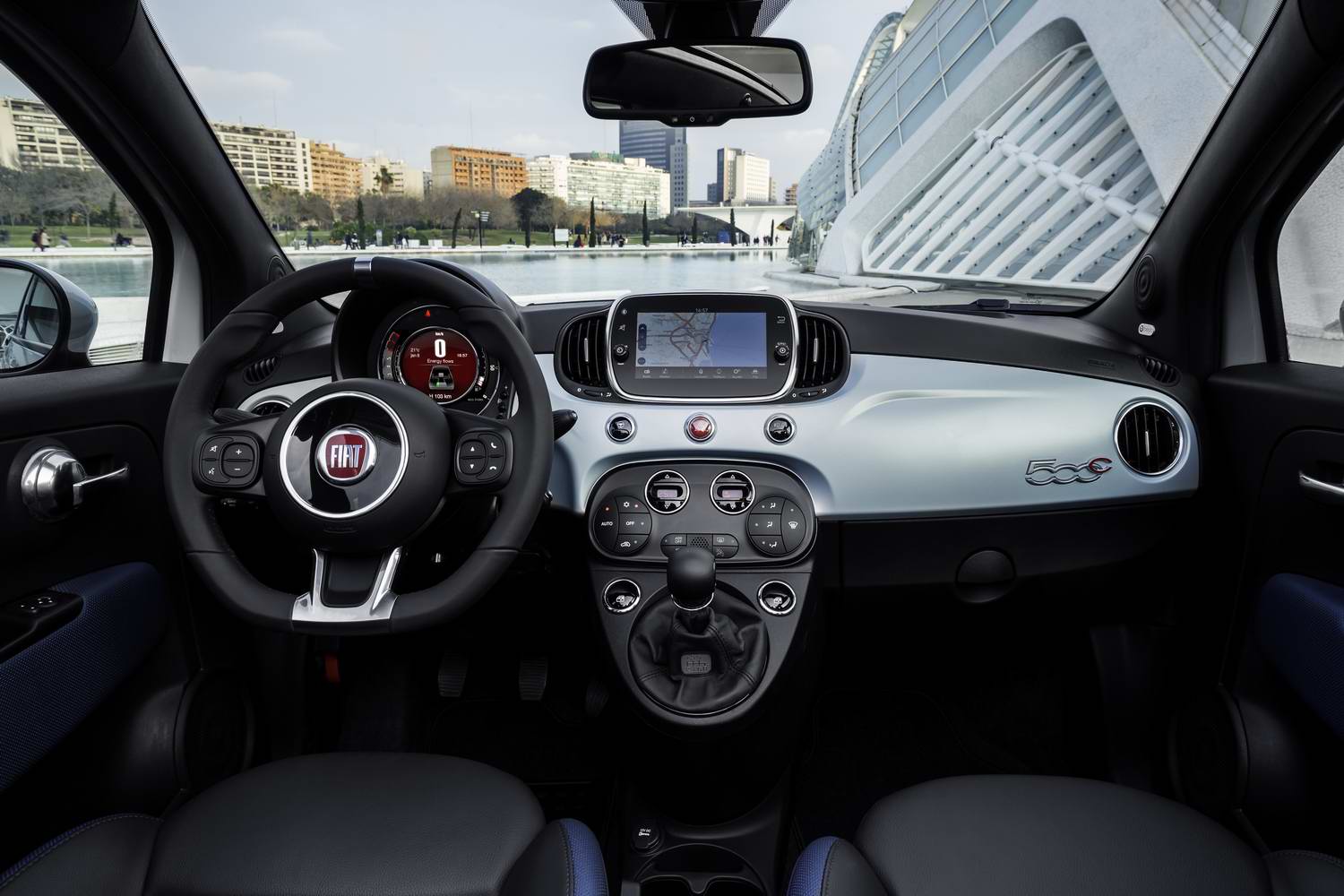 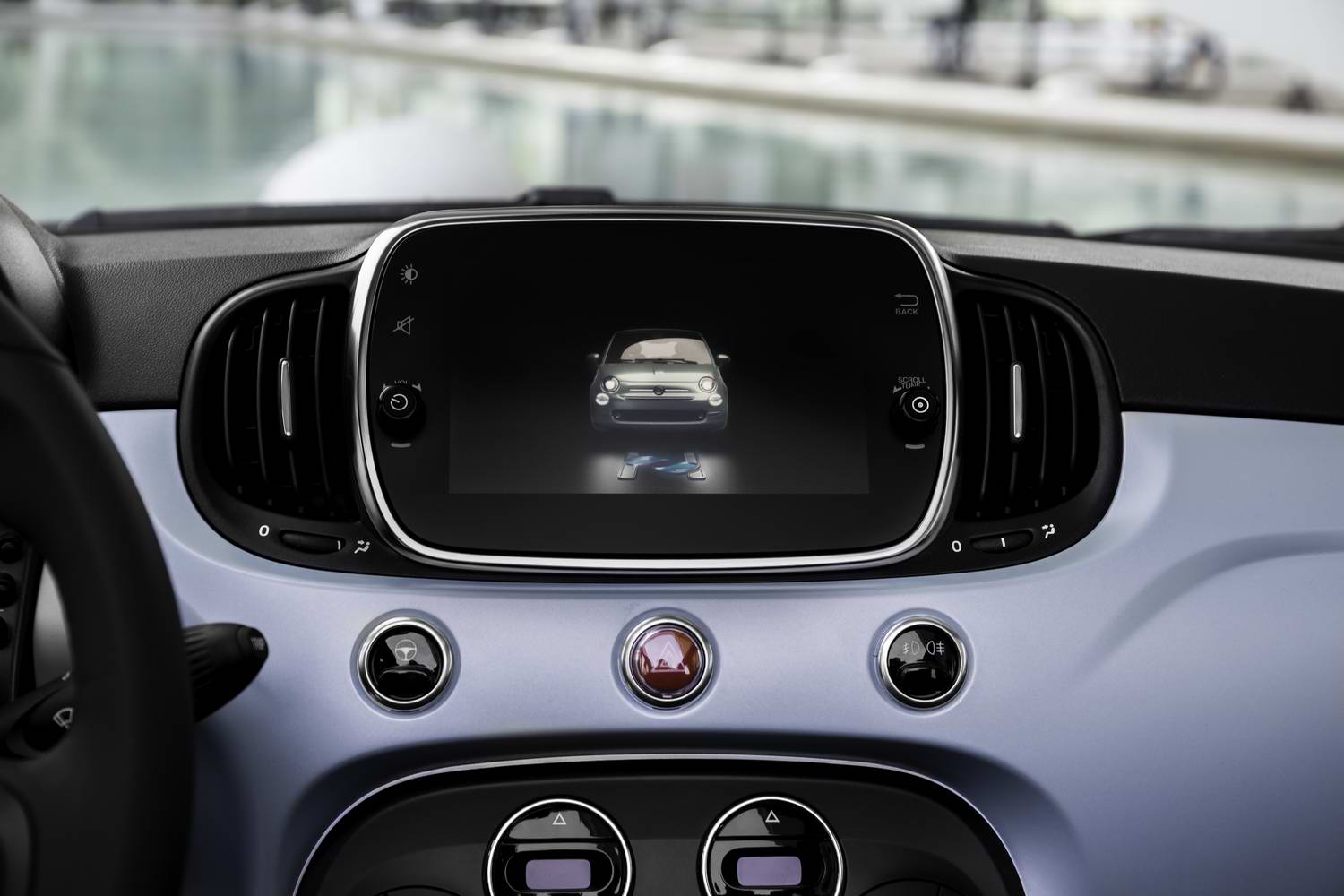 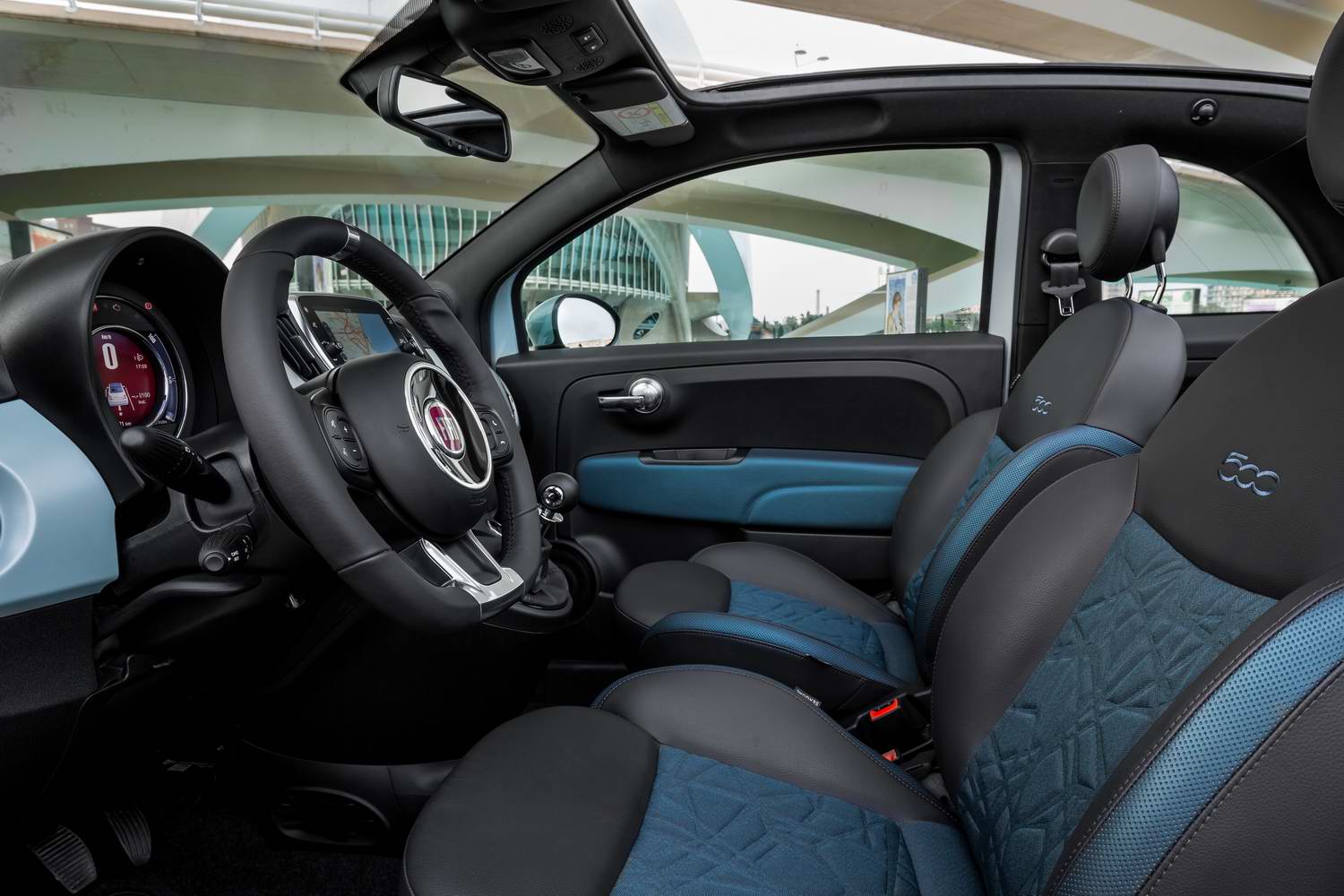 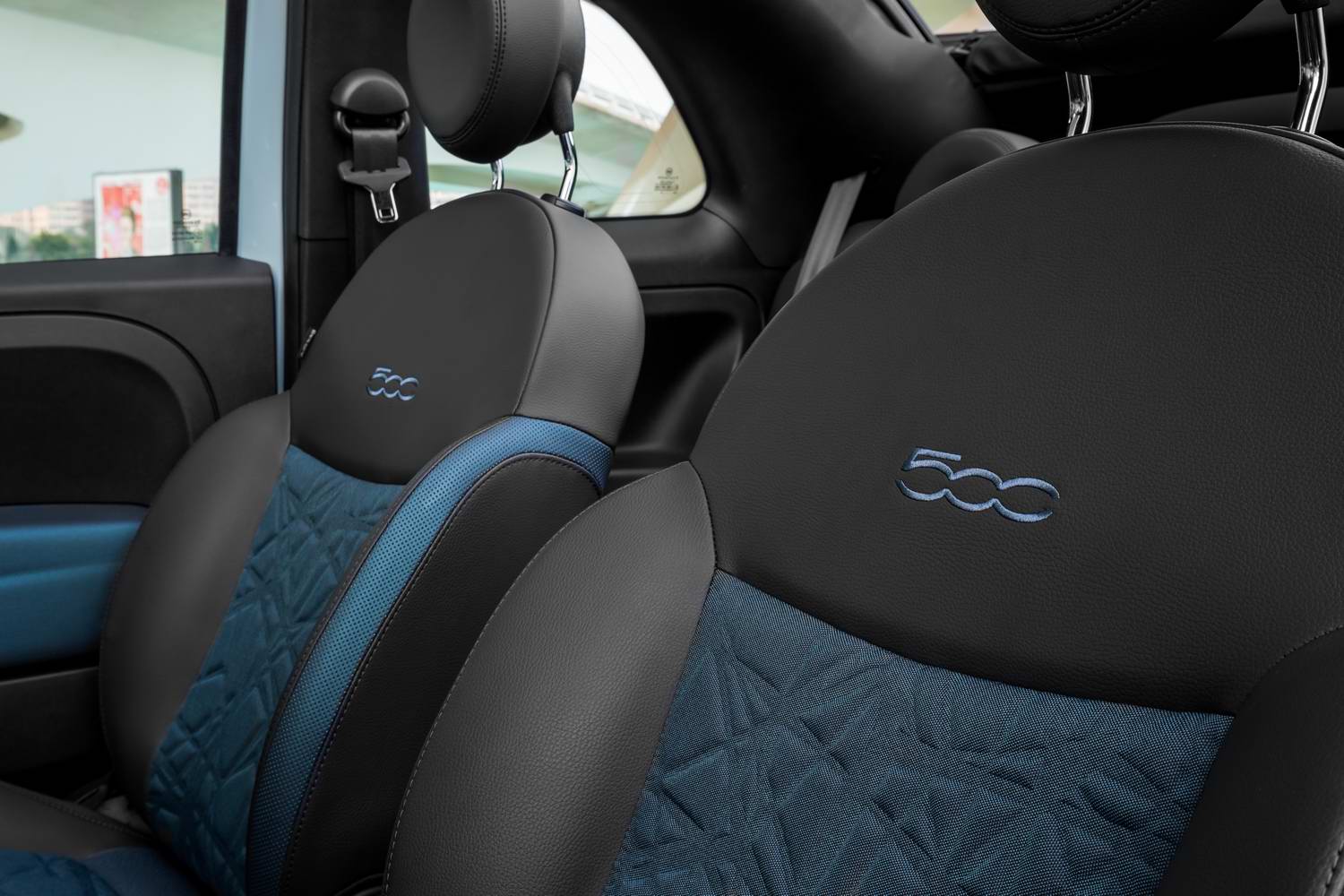 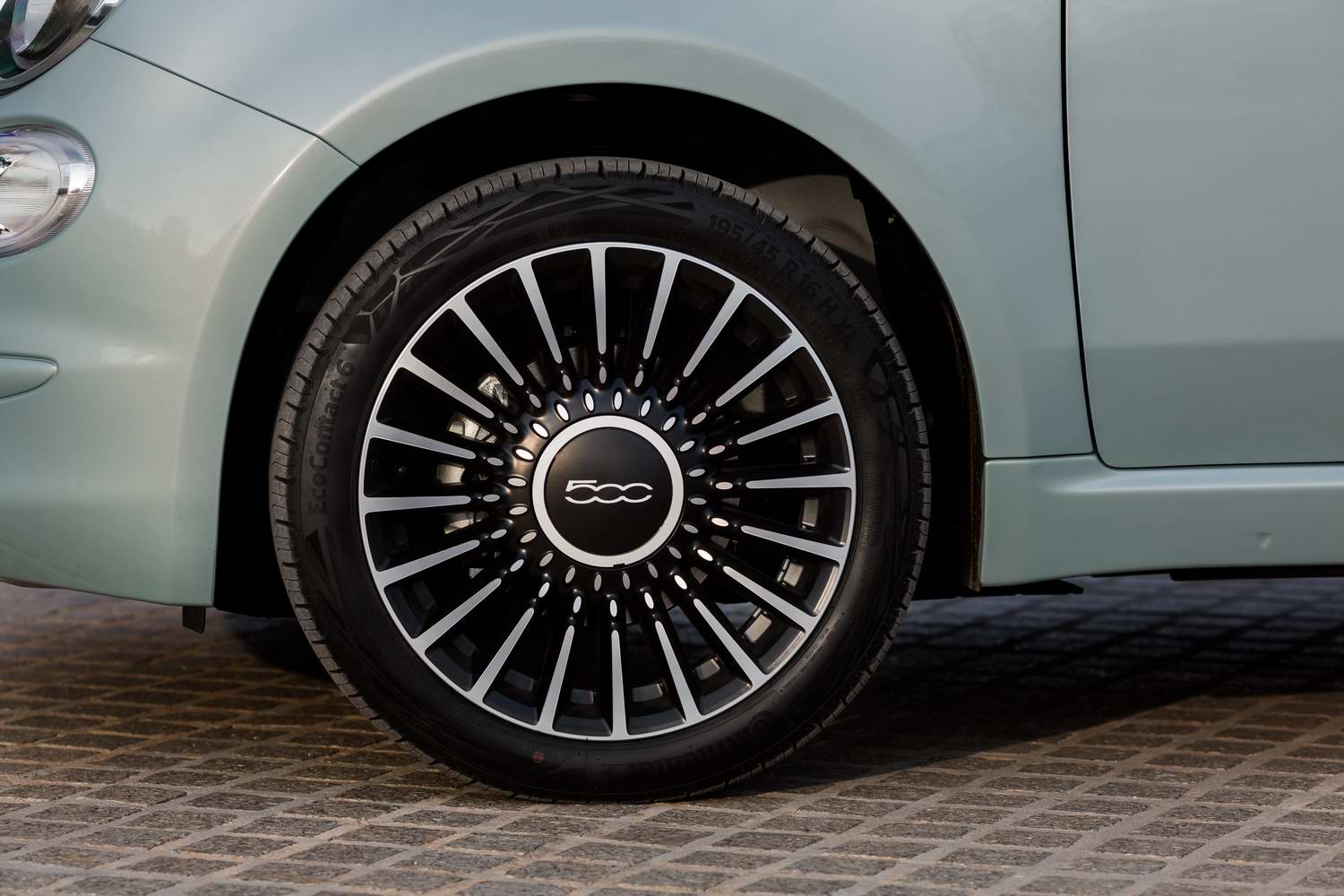 Fiat's late to the hybrid party with this part-electric 500, but it's decent fuel-saving tech.

Fiat's next model of the ever-popular 500 city car will be an all-electric affair, but until then there's just time for the current version - launched 13 years ago, remember - to have a part-electric mini-renaissance in its dotage. This is the Hybrid model, with very mild electrical assistance and a few strange quirks in operation, and we've tested it here as the open-top 500C cabriolet.

By now, the Fiat 500, or even the 500C with its retracting soft-top, is such a familiar shape that there's little to say here. It still looks great, outside and in, despite being an old car, and the Hybrid models do nothing to harm the appearance. For what it's worth, these First Edition versions come in the distinctive Verde Rugiada hue, or Dew Green in English, and they feature little 'Hybrid' badges on the B-pillar and another 'Hybrid' legend on the liftgate. Inside, Seaqual seats are made from a yarn imbued with plastics recovered and recycled from the sea (10 per cent) and the land (90 per cent), while energy-flow displays are added to the 500's digital instrument cluster, to show you how the car is using its petrol and electric reserves on the move. Aside from a matte-green dashboard to match the exterior, the 500C Hybrid feels no different to sit in than a regular 500C. Which means it's very cramped in the back, a strict four-seater and possessed of a small boot, so it's not the most practical city machine in the world.

This is an extremely mild hybrid electric vehicle (MHEV) system. It includes a belt-integrated starter generator (BSG) rated at 3.6kW and a tiny lithium-ion battery to supplement it, the whole lot backing up a new engine. The 'Firefly' 1.0-litre three-cylinder normally aspirated petrol engine replaces the old 1.2-litre four-cylinder previously found in the 500 family. Power is up by a solitary horse, from 69hp on the 1.2 to 70hp here, but torque has dropped from 102Nm at 3,000rpm to 92Nm at 3,500rpm. Yet, while the 500C's performance isn't anything to write home about, the MHEV system is said to save fuel and reduce emissions by up to 30 per cent on the models where it is fitted; in the 500's case, an old 1.2's figures of 61mpg and 110g/km have improved to 72.4mpg and 88g/km for the Hybrid.

What's weird about this, though, is that so mild is the system in question that pure electrical running is almost a non-event, even in this city-car shell. It can coast on its electric power alone, shutting off the engine at speeds slightly higher than walking pace if needs be, but to do this the 500C Hybrid needs to be in neutral and you have to have your foot off the clutch. Yep, Fiat has geared the system to work in a manner that you're explicitly told not to do in manual cars, normally. You're supposed to keep the car in gear until you've come to a complete stop and engaged the handbrake.

This is a minor frustration, in and amongst a driving experience that is incredibly similar to that previously offered by pure-petrol versions of the Fiat 500. Seriously, the integration of the MHEV tech is so subtle that it almost comes to the point where it's only the fact Fiat has told you it's a hybrid that allows you to remember you're doing your bit to reduce emissions. In every other respect, this might as well be any kind of low-powered, three-cylinder petrol engine, sans electricity.

However, that's not to say we don't like the way the 500C Hybrid drives, because there's one major bonus of this MHEV drivetrain and it's the noise: we've had two-cylinder 500s before and raved about the soundtrack they had, but the Firefly is another level again. Shorn of the low-pressure turbo that is so usually added to these 1.0-litre engines, there's a preposterously sporty little exhaust note to the 500C Hybrid as it winds through 3,000-4,000rpm. True, revving it out to the 6,000rpm point of peak power feels a touch counter-productive, as the engine becomes wheezy up there, but there's enough pep and verve to the engine to allow you to enjoy its voice at lower revs anyway.

Otherwise, it's a typical 500C driving experience: light controls, good visibility out in all directions (even in the convertible, although folding the roof right back does reduce your directly rearwards view), decent but not scintillating handling and enough refinement to make it an excellent urban conveyance and perfectly capable on bigger, faster-moving roads.

Prices for the Hybrid model have yet to be confirmed for the Irish market, but it will probably not be at the top end of 500 values due to its low CO2 emissions and modest power and torque outputs. We don't know the specification as yet, either, but 16-inch alloys, a seven-inch HD touchscreen with Apple CarPlay, Android Auto and Bluetooth, plus a leather steering wheel should all be standard kit, with a Beats sound system, climate control, satnav and parking sensors all being on the options list.

You can get this same Hybrid drivetrain on the regular Fiat 500 hatch and the Panda Cross too (albeit it's a Panda City Cross, not the pukka 4x4 version), but whichever part-electric Fiat you go for, this isn't what you'd call ground-breaking stuff. The addition of the MHEV system has reduced the 500C's fuel consumption and emissions numbers by a significant enough margin to affect the tax implications here in Ireland, yet beyond that the driving experience is no different to its stablemates with internal combustion and there isn't any capability for pure EV running. As city cars go, the Fiat 500C Hybrid remains one that looks cute, but which isn't exactly pushing the boundaries of what's possible in this class. 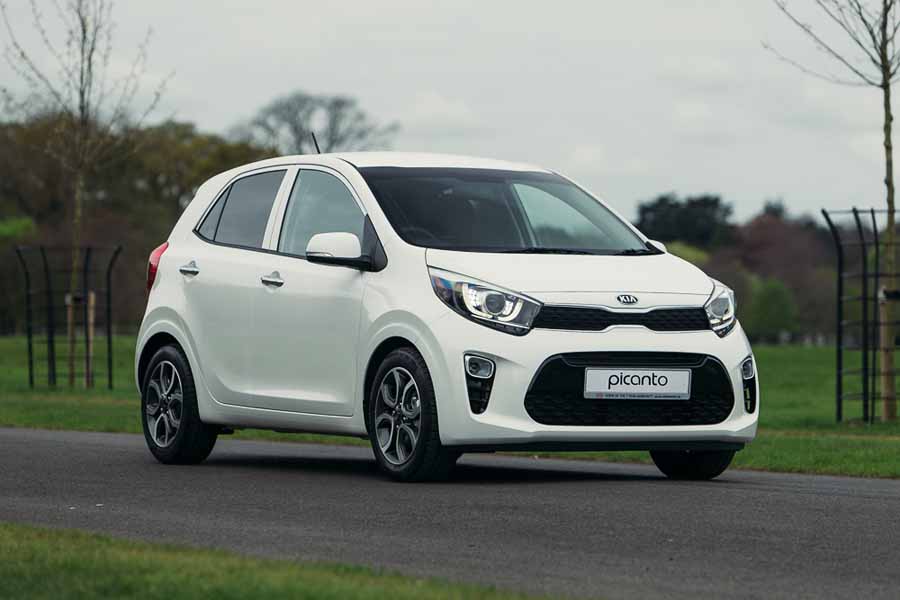 Kia Picanto review
Kia Picanto vs. Fiat 500C Hybrid (2020): good looks and appealing driving manners mark out the sharp-suited Picanto, although there is - as yet - no mild hybrid option in the Korean car's range. 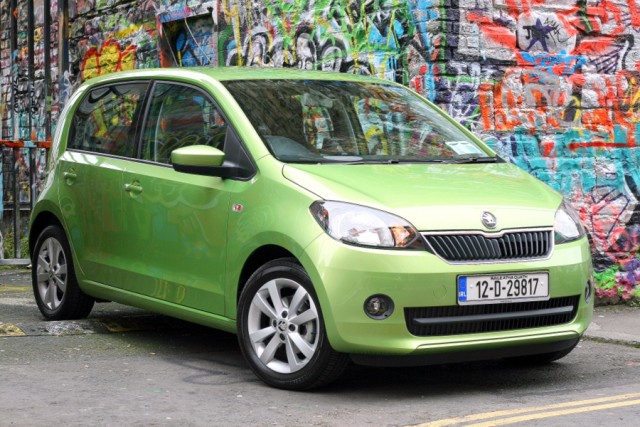 Skoda Citigo review
Skoda Citigo vs. Fiat 500C Hybrid (2020): the Citigo is petrol-only for the Irish market, despite the launch of an electric version elsewhere, but don't bet on that being the case with the next generation. 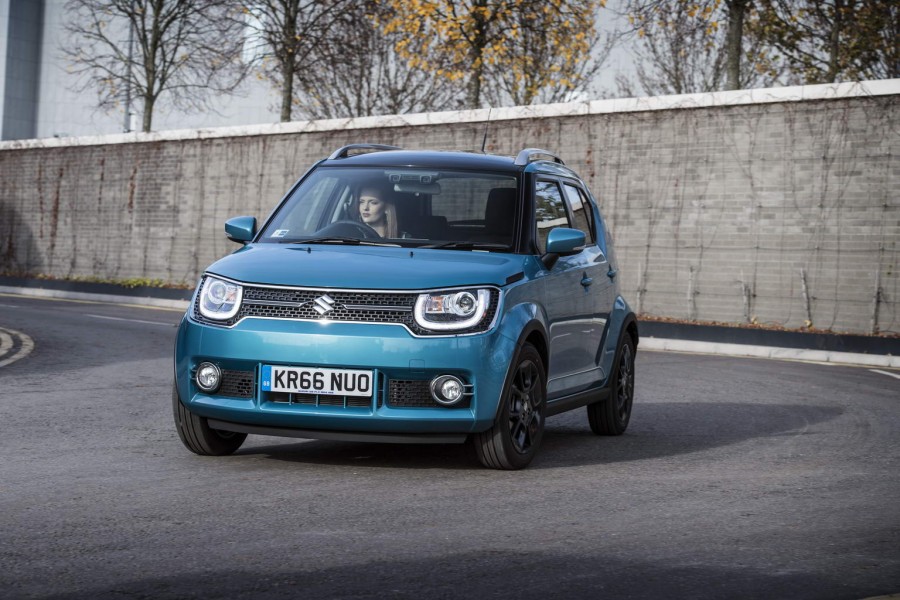 Suzuki Ignis review
Suzuki Ignis vs. Fiat 500C Hybrid (2020): has a similar mild-hybrid drivetrain, and relies on its cutesy looks and low running costs to tempt buyers in. Ignis is more fun to drive than the 500C, however.