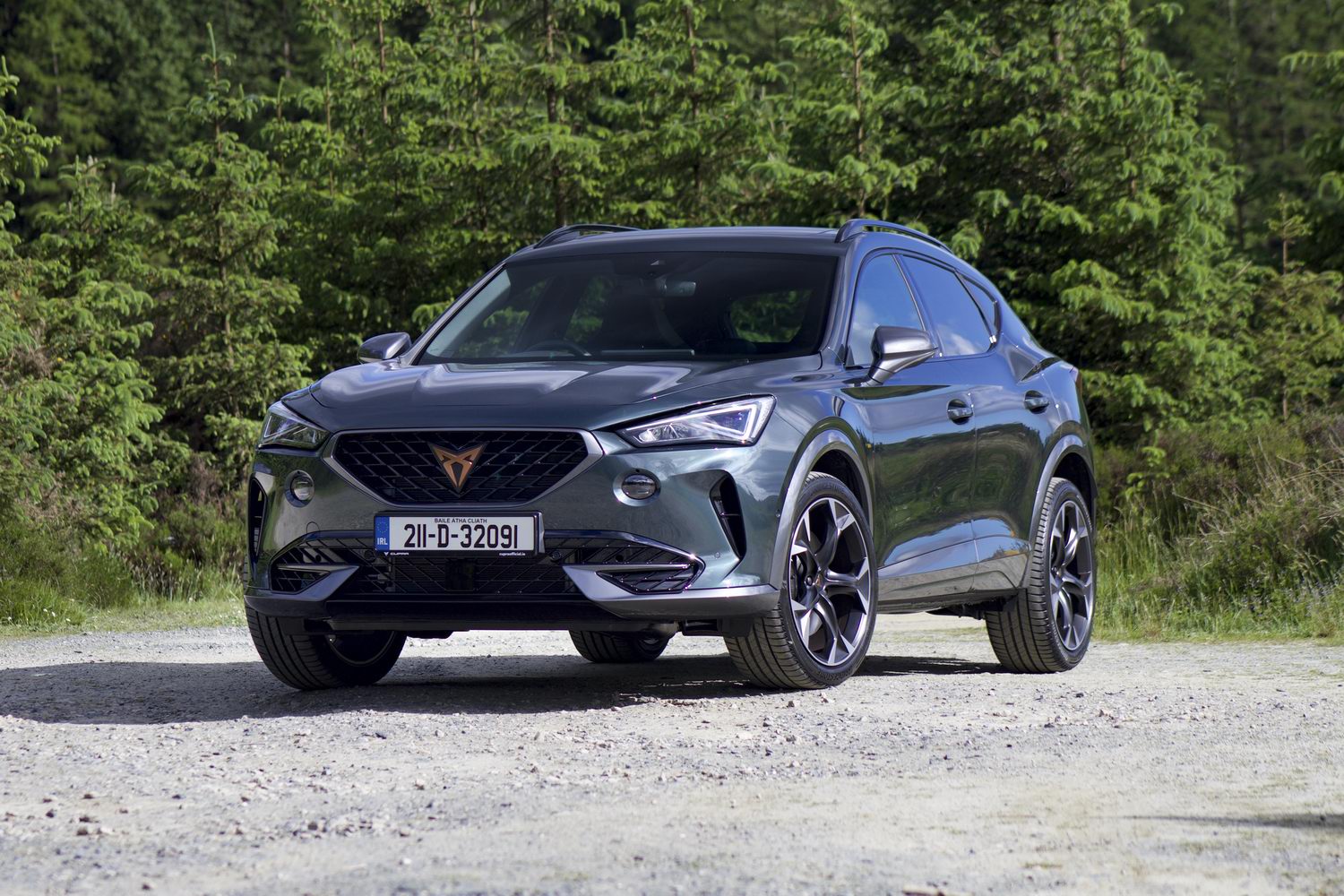 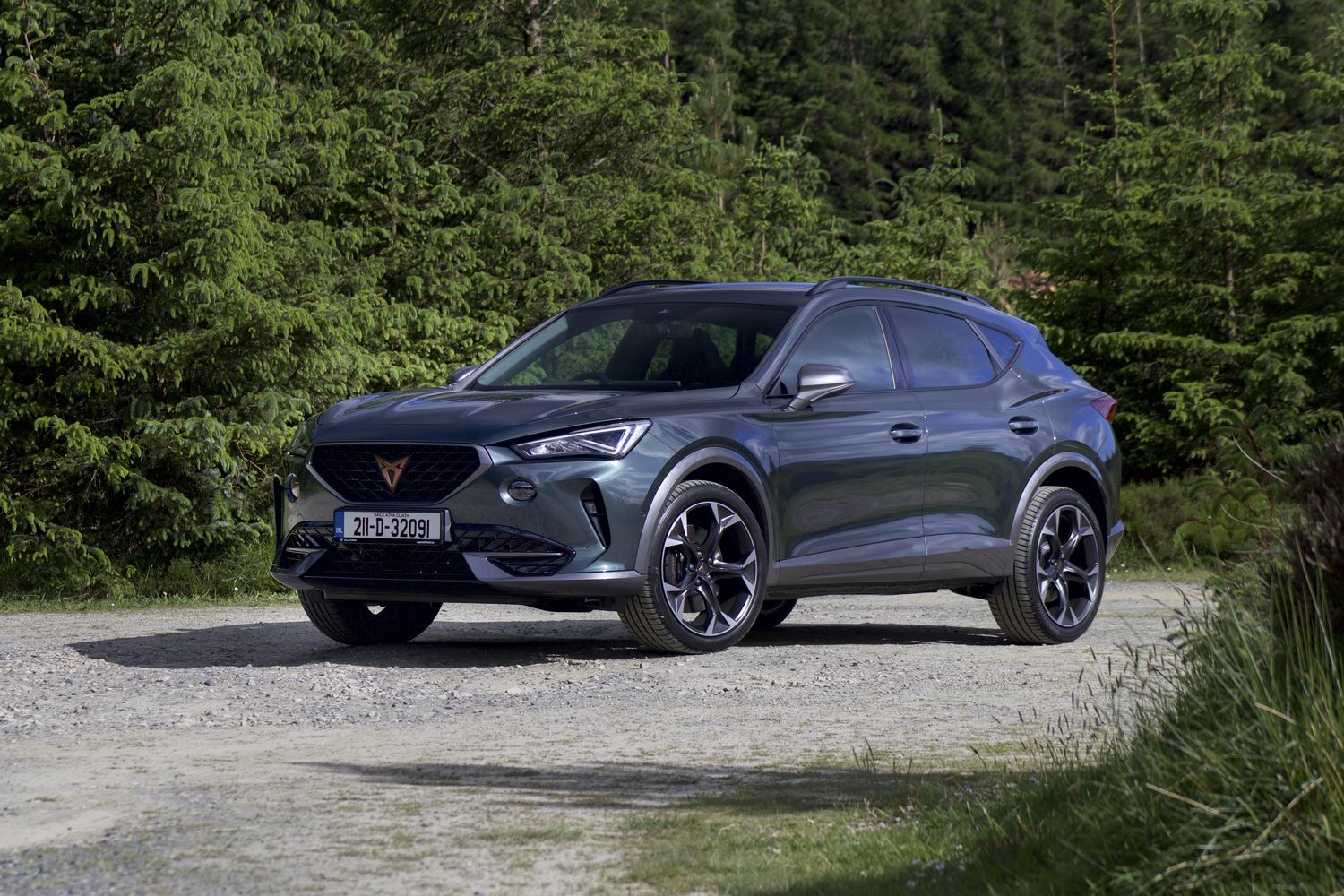 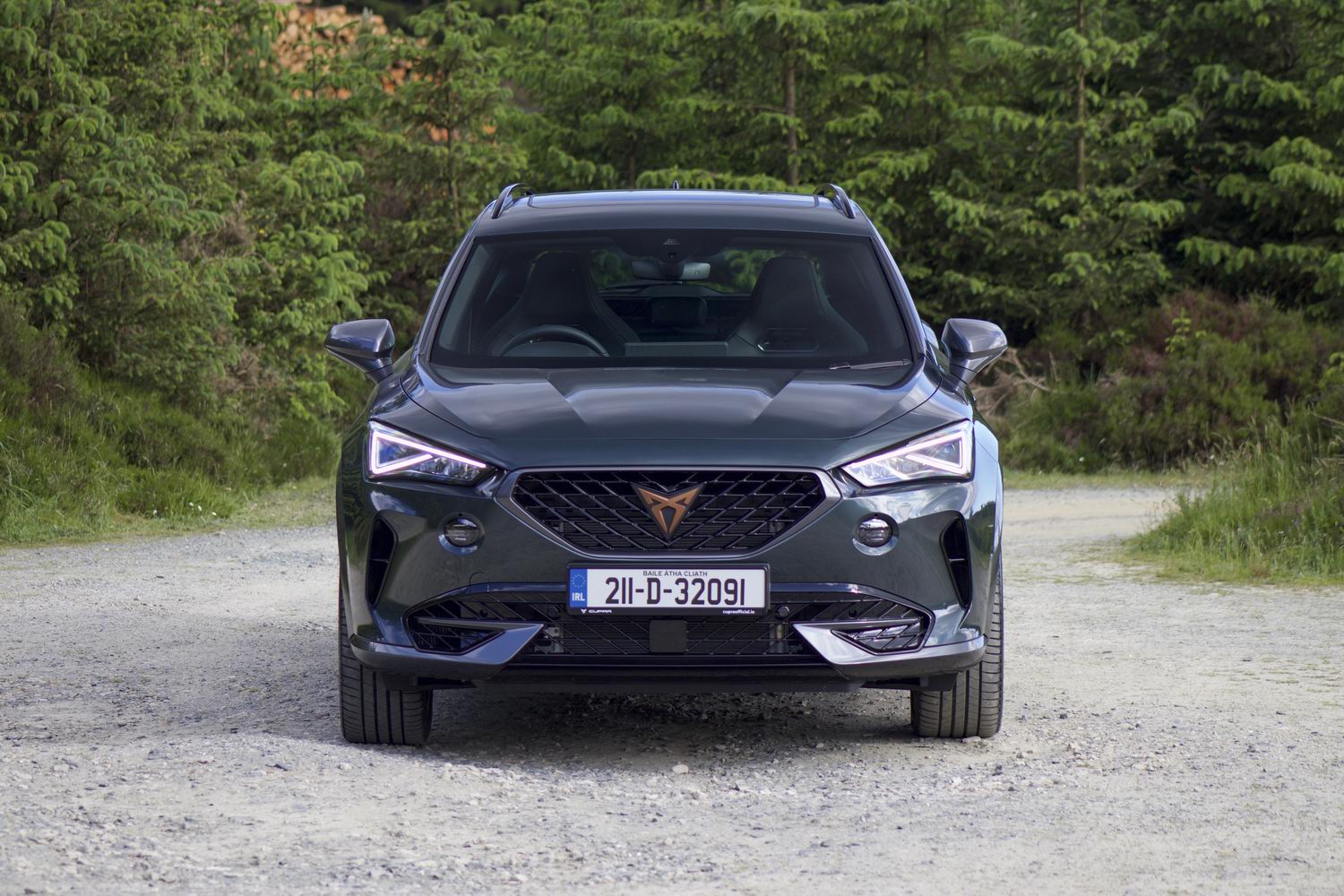 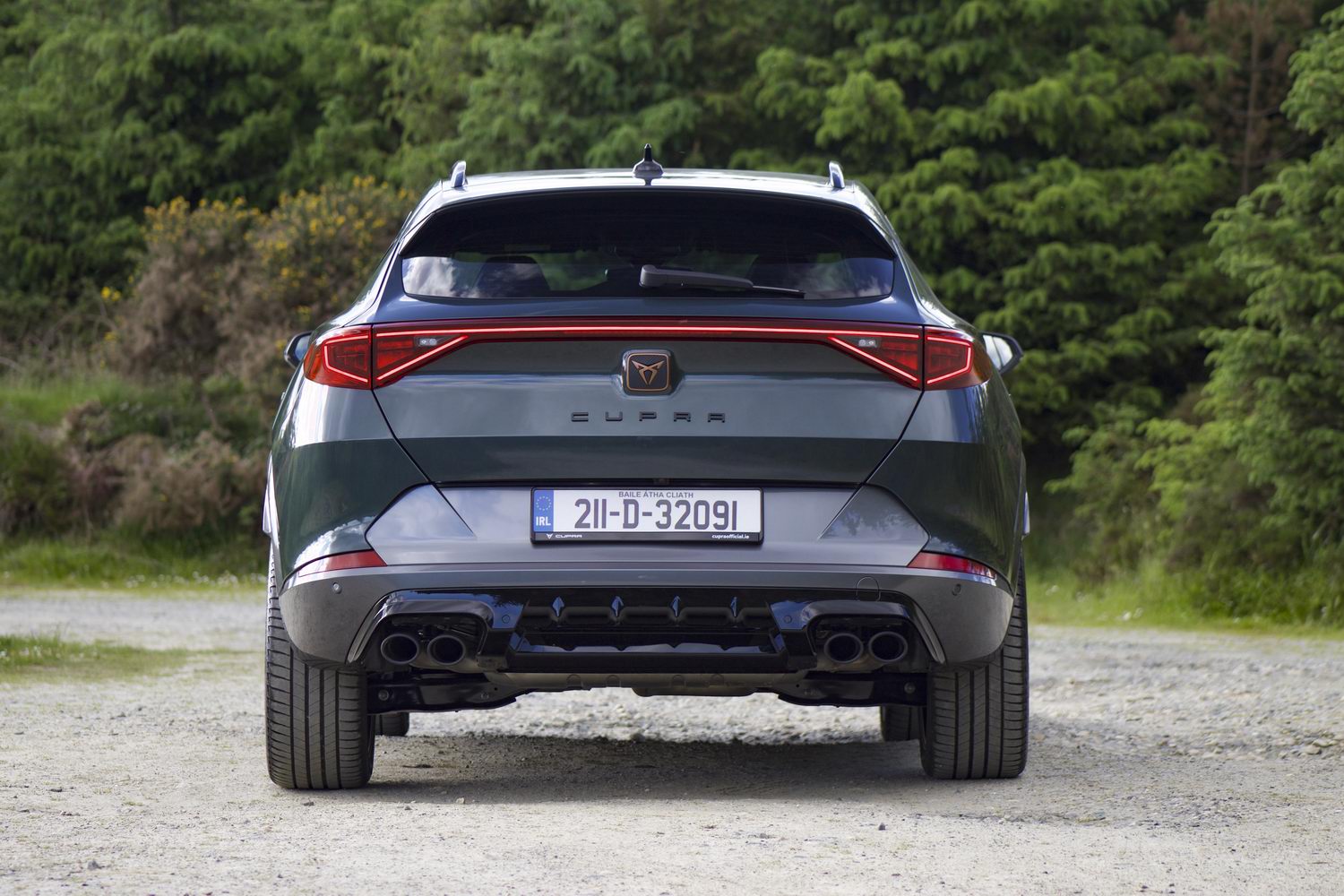 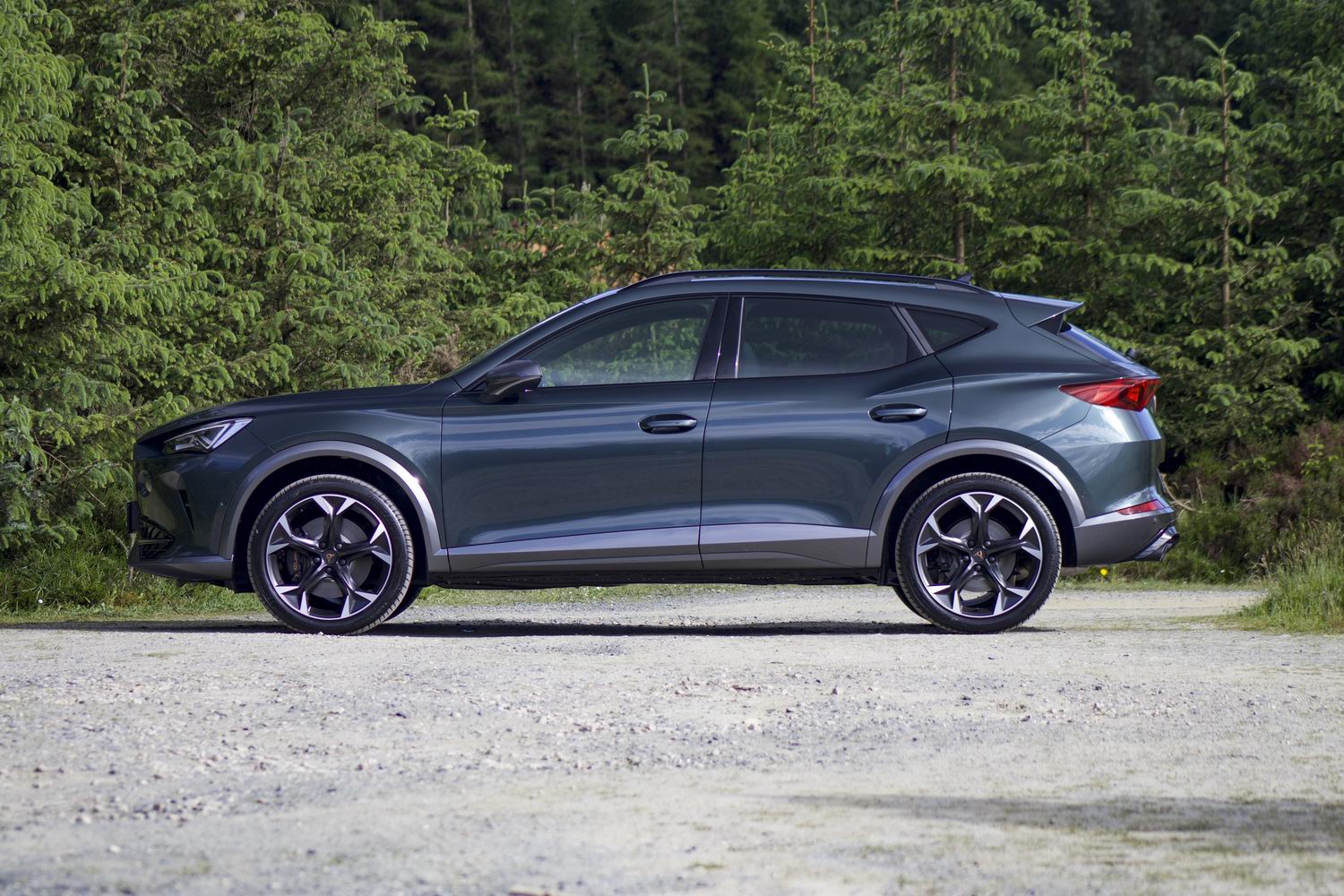 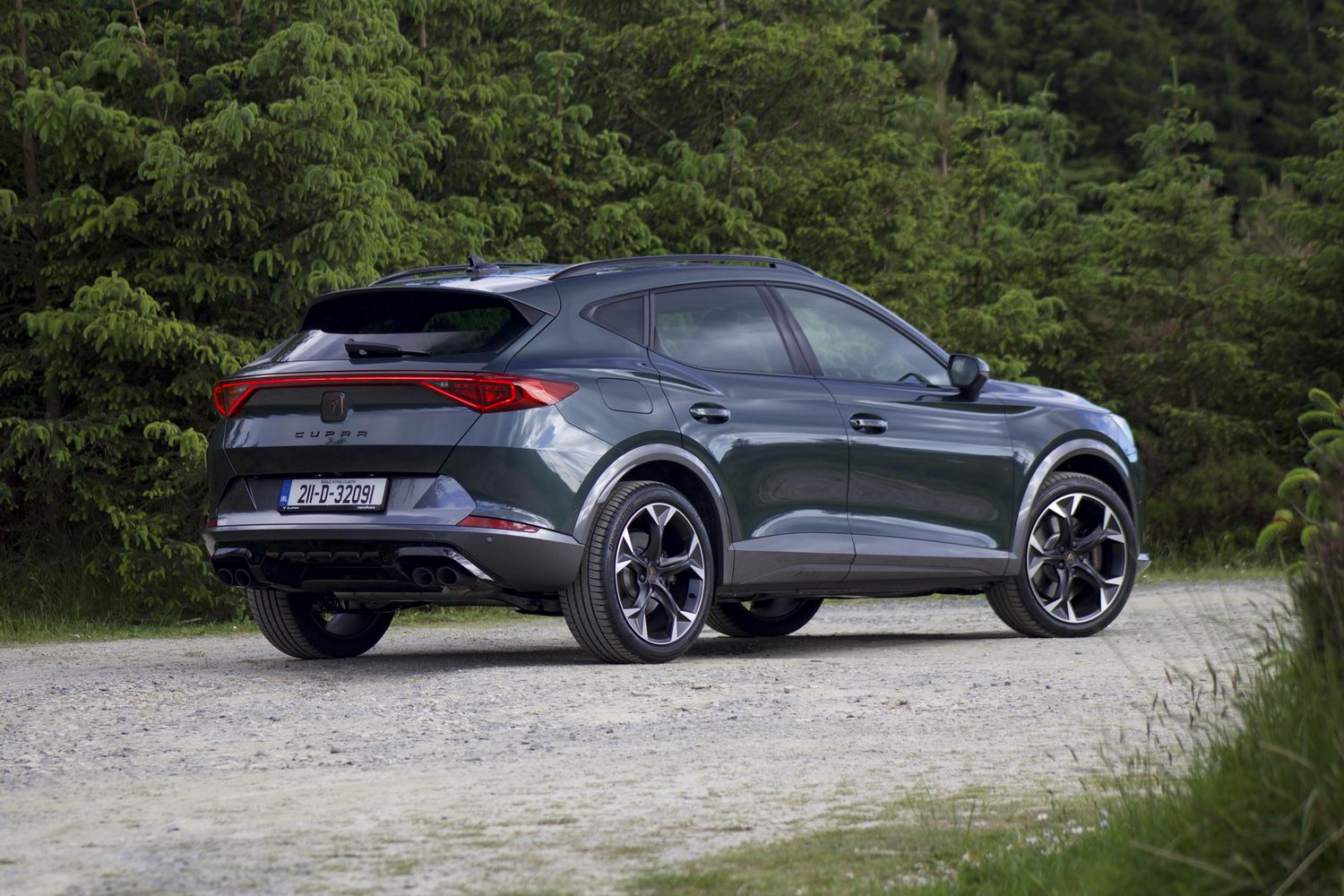 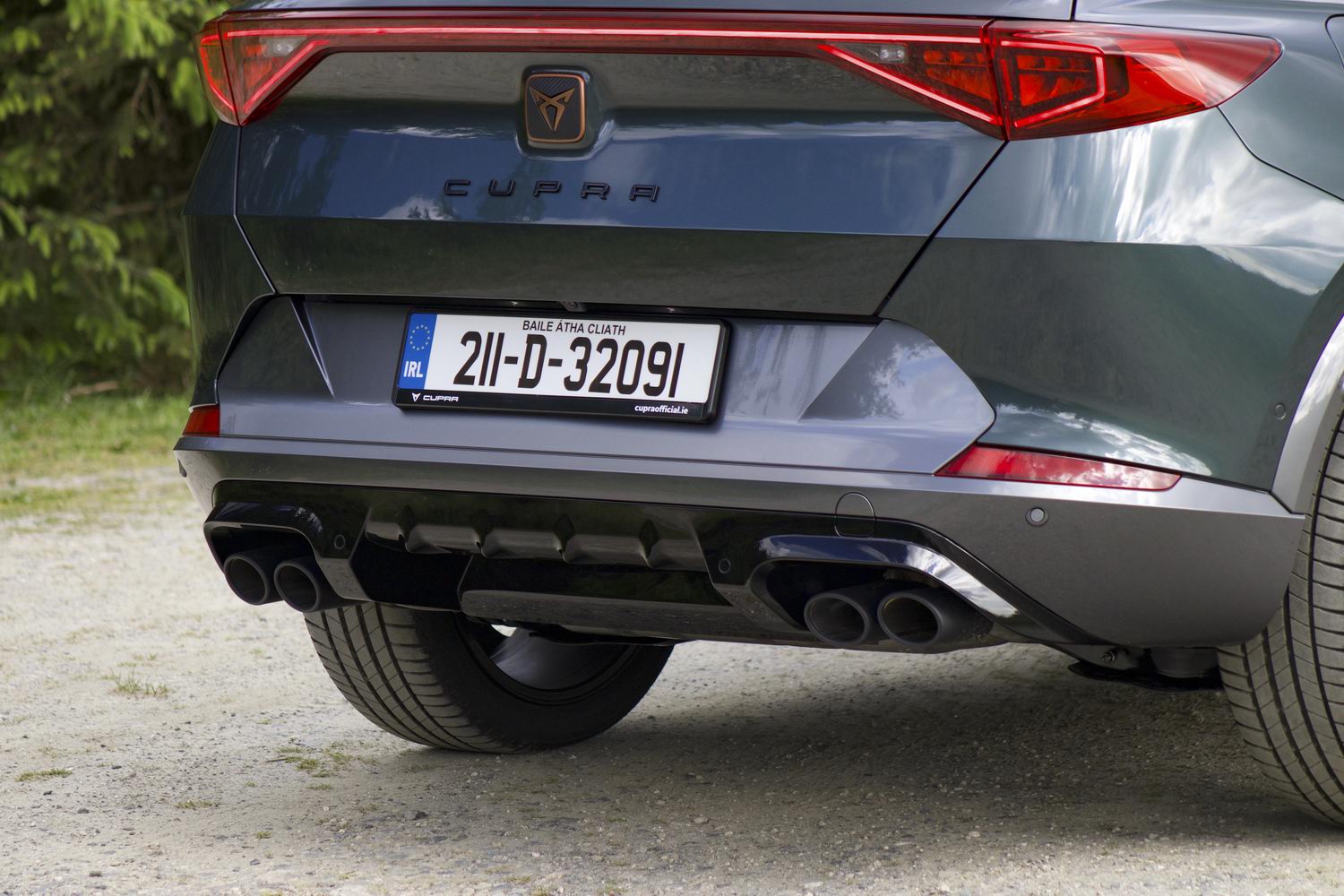 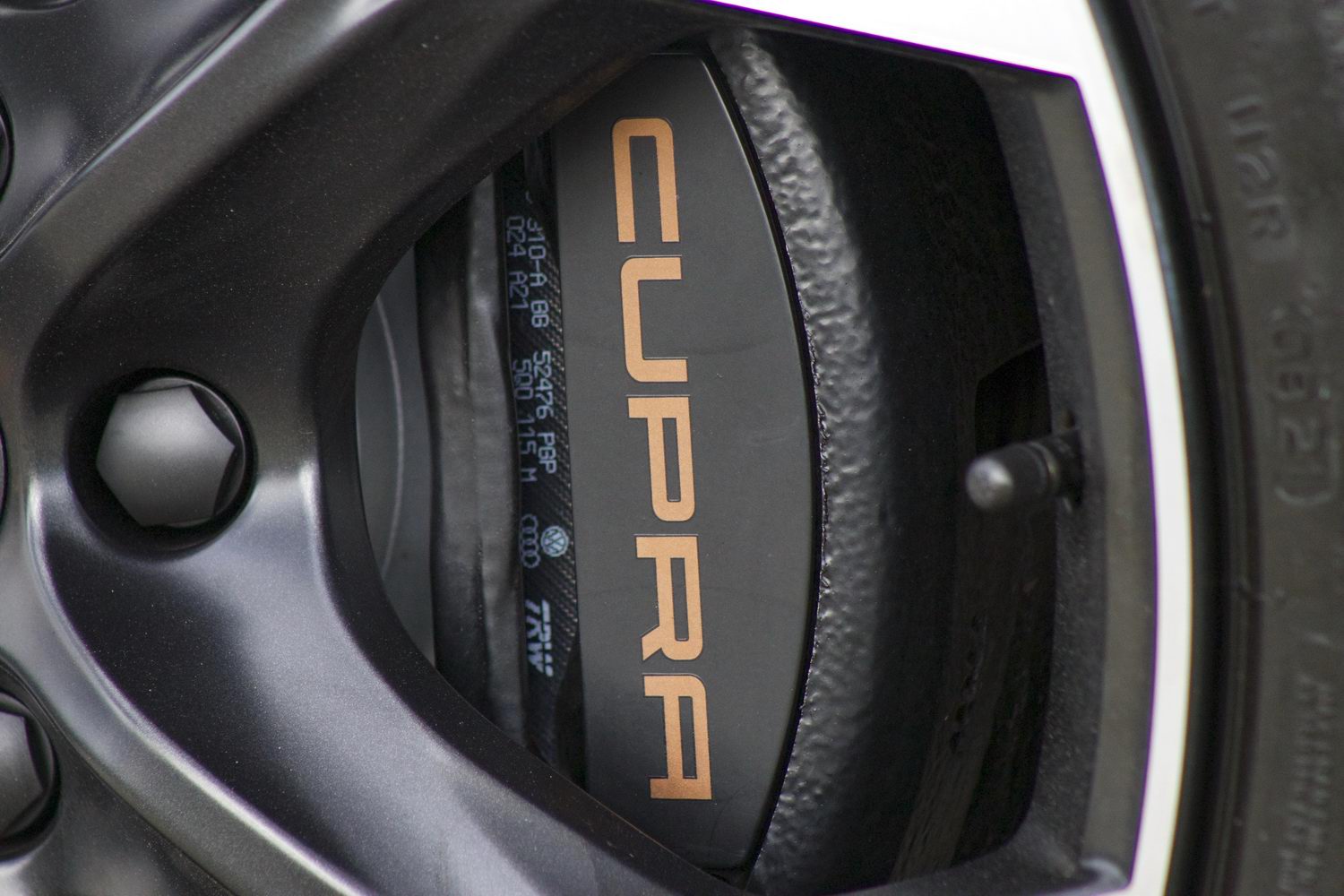 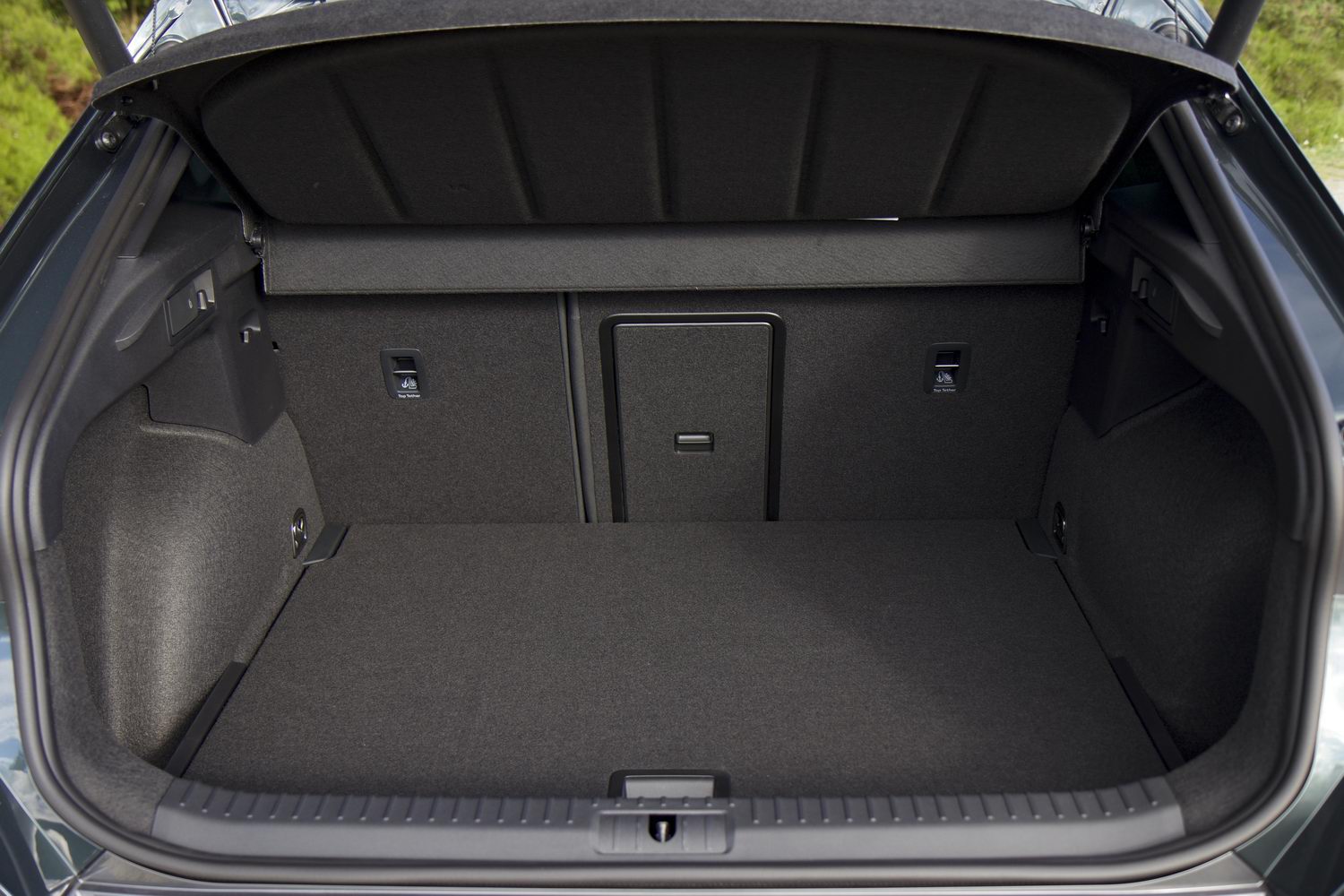 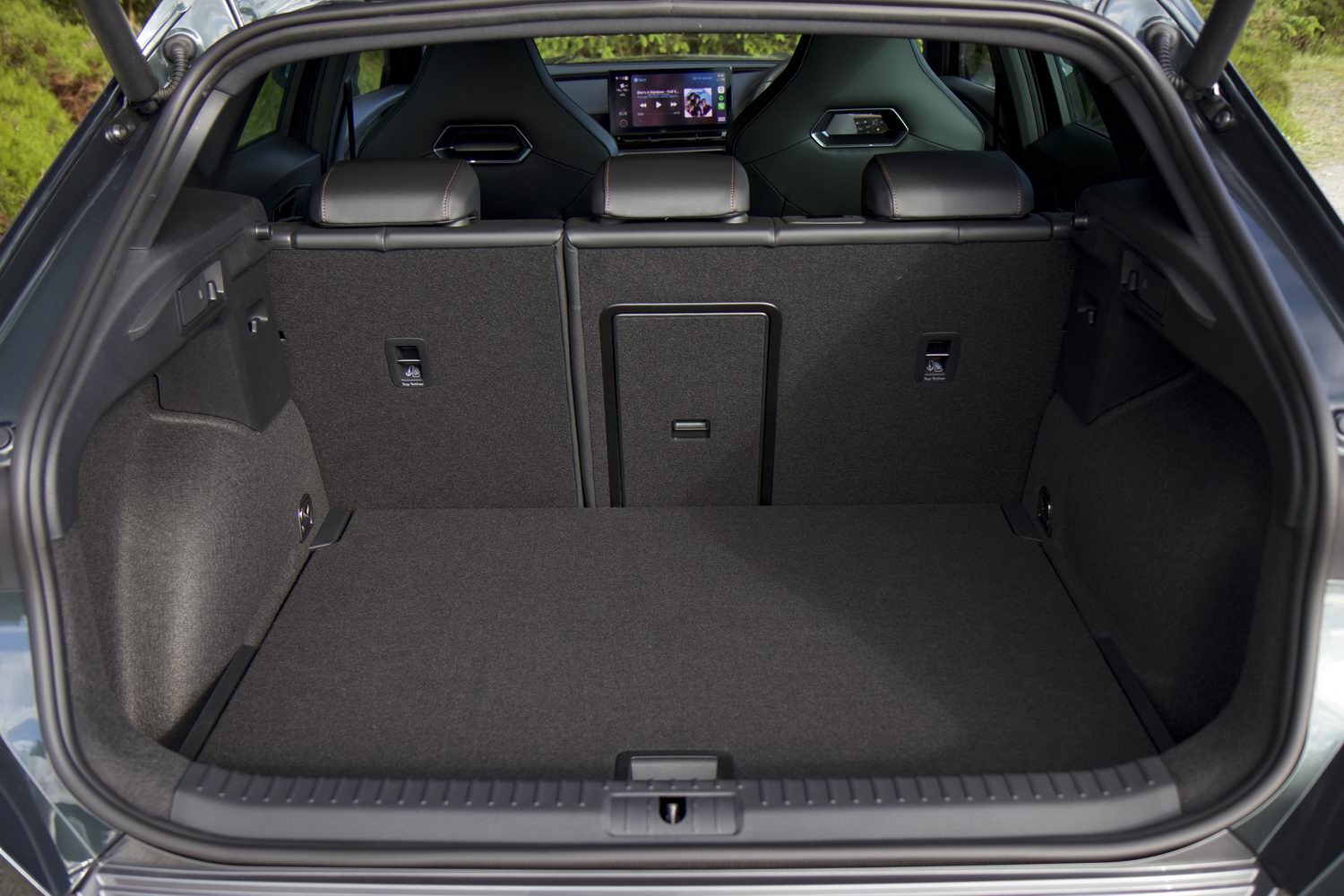 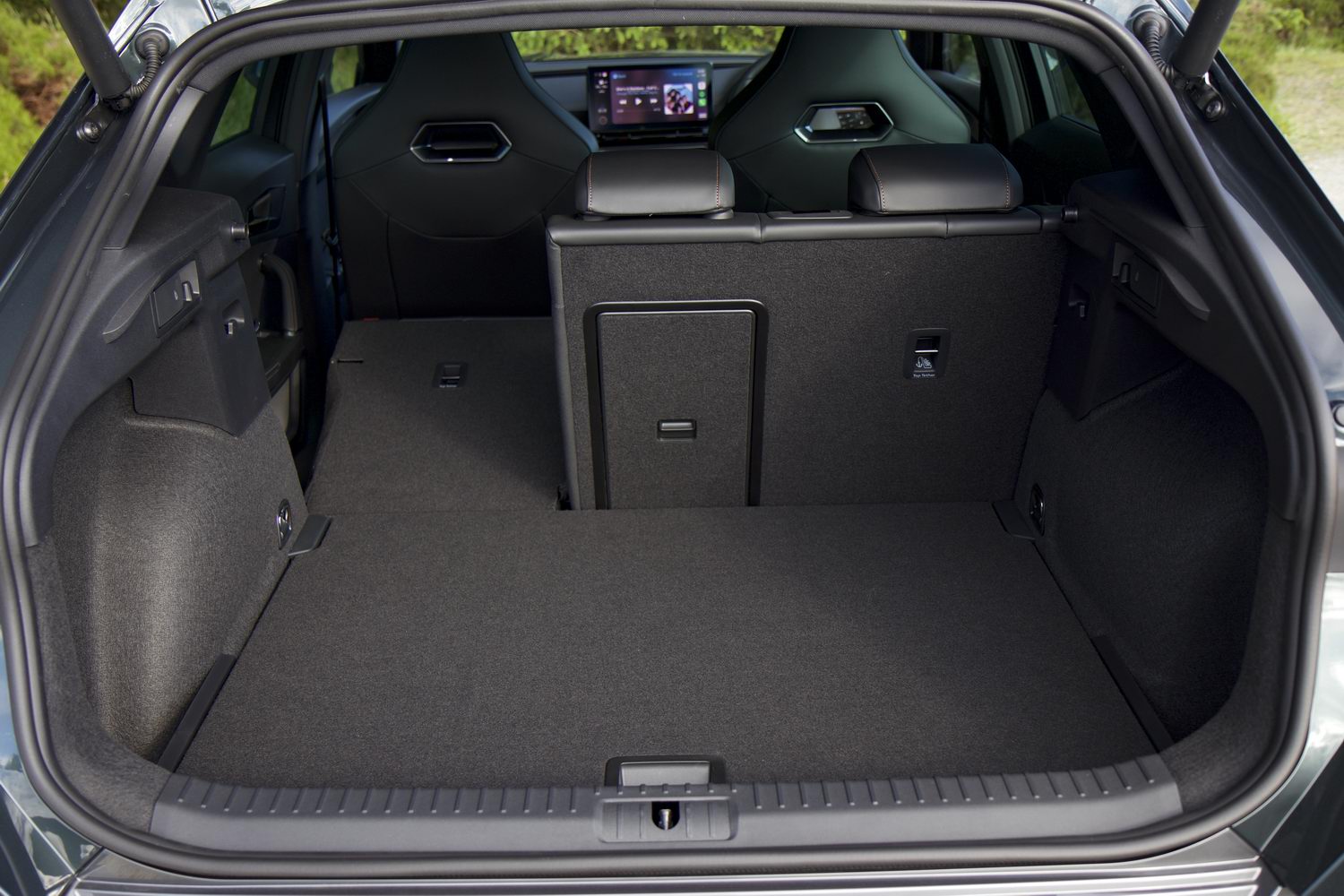 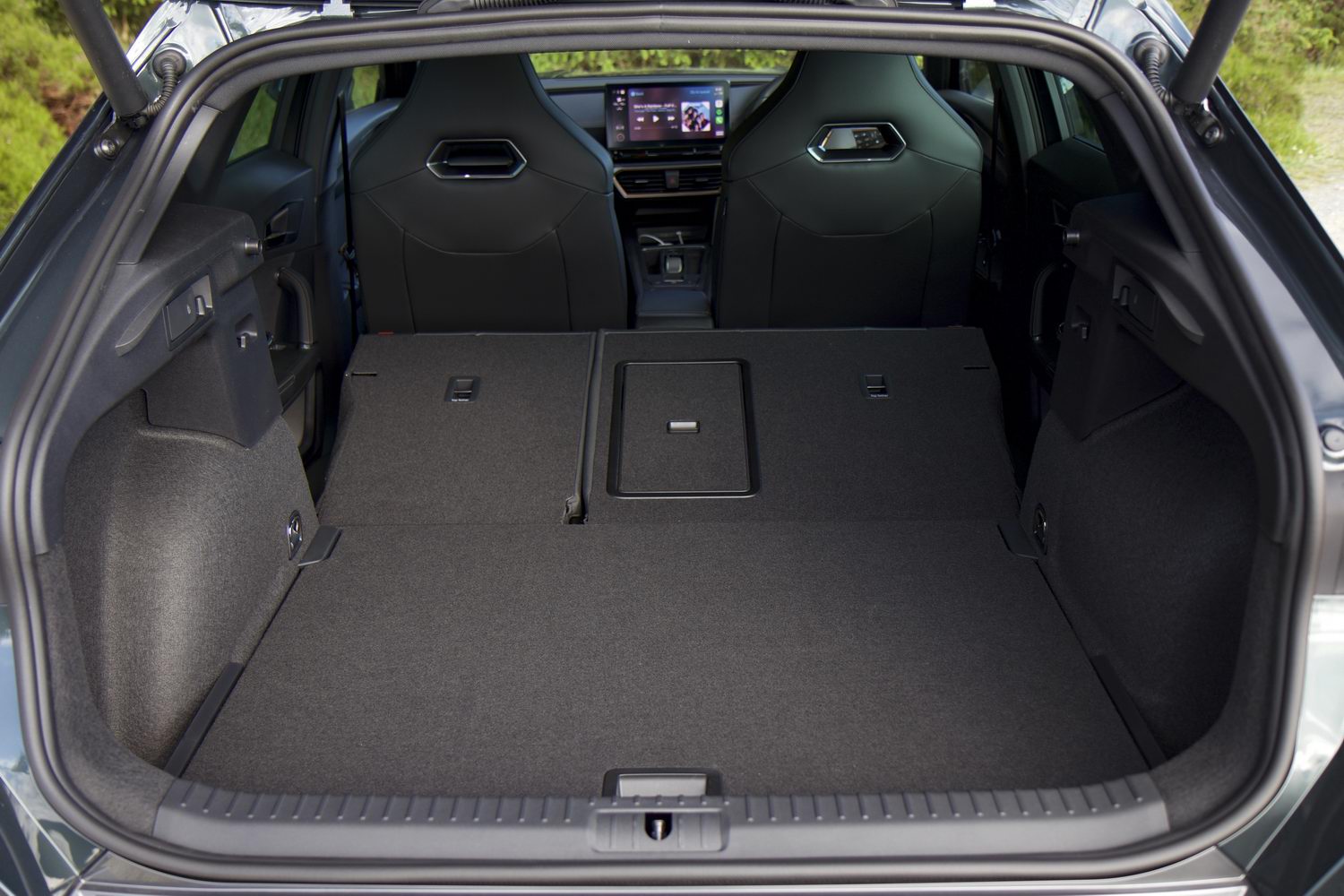 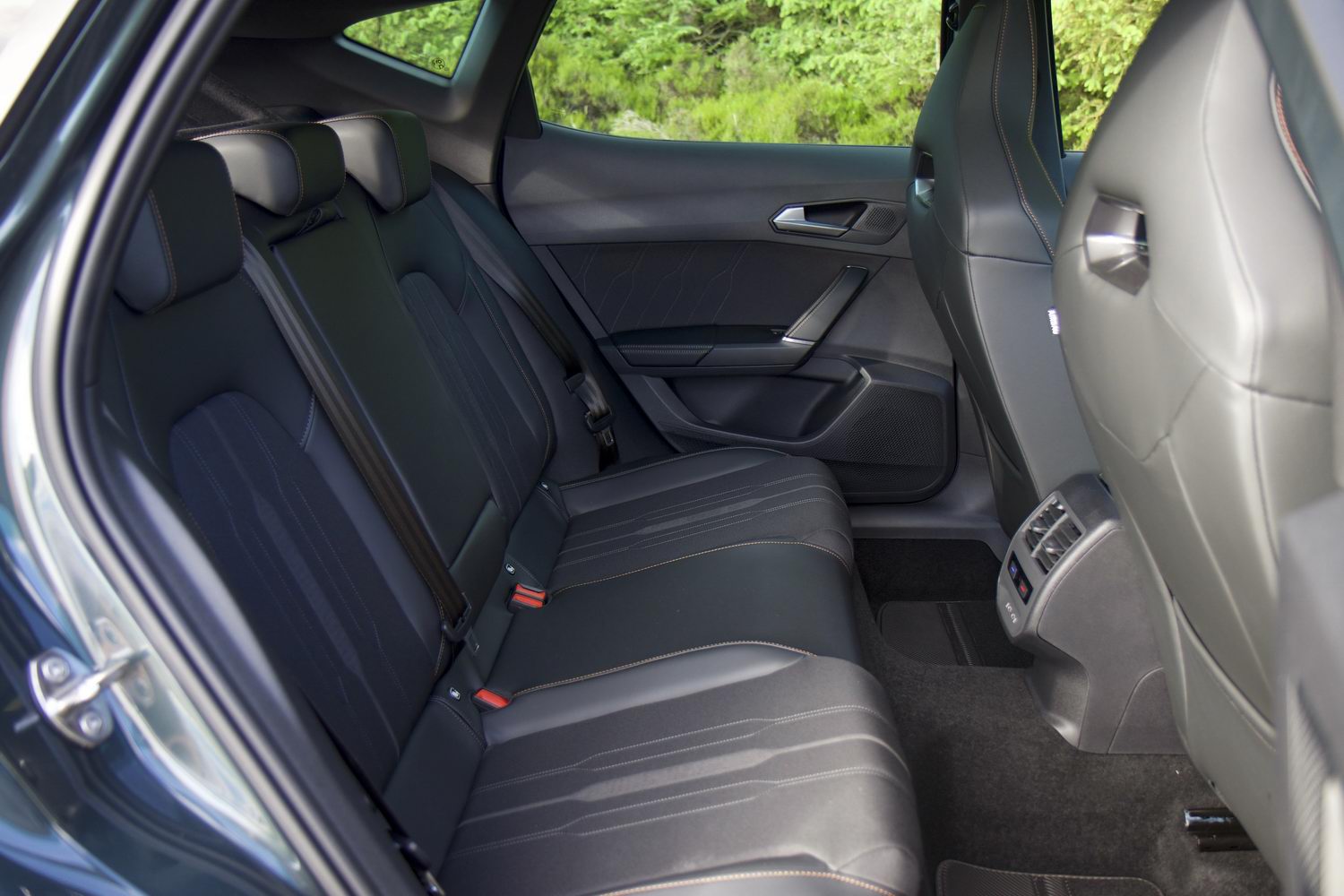 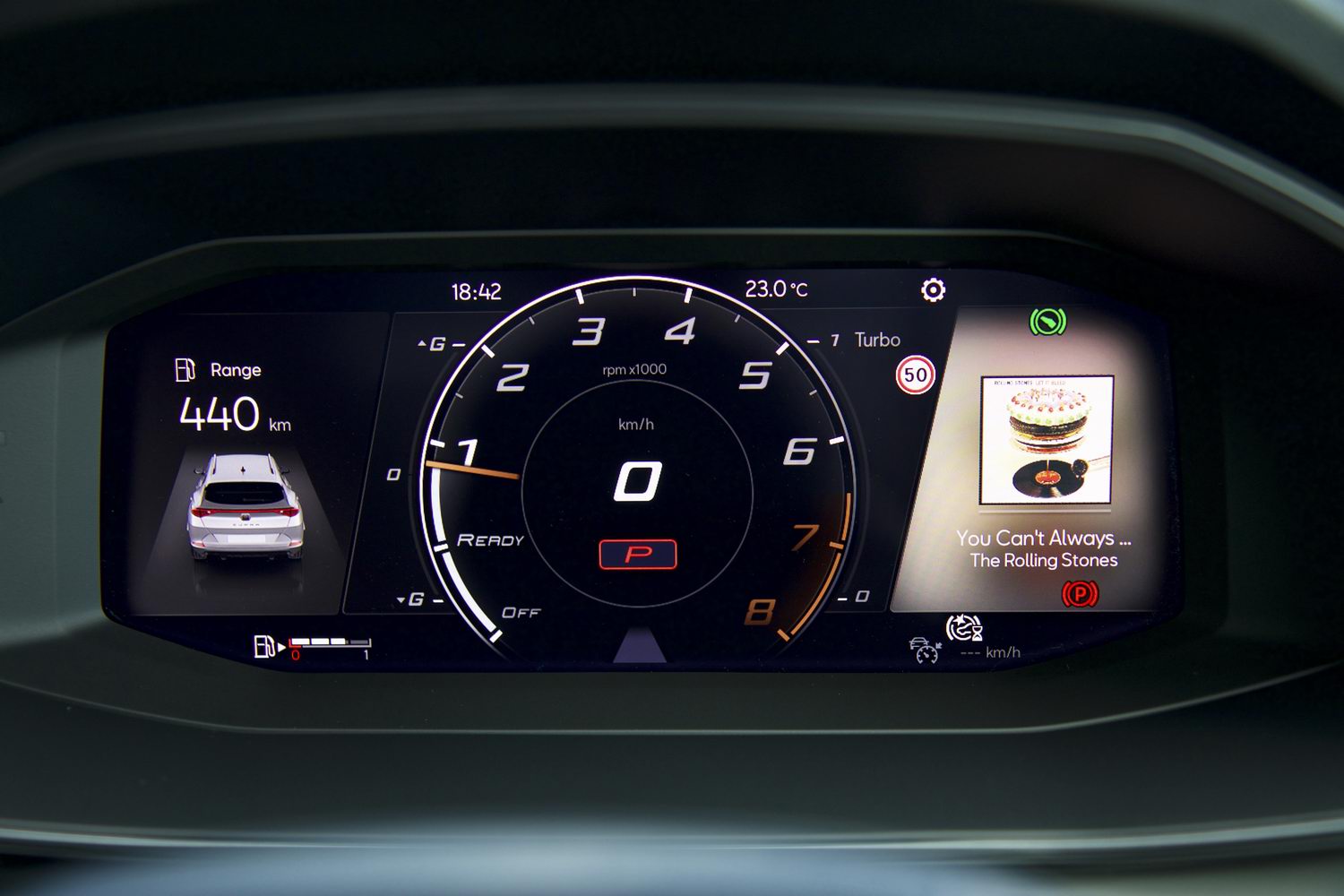 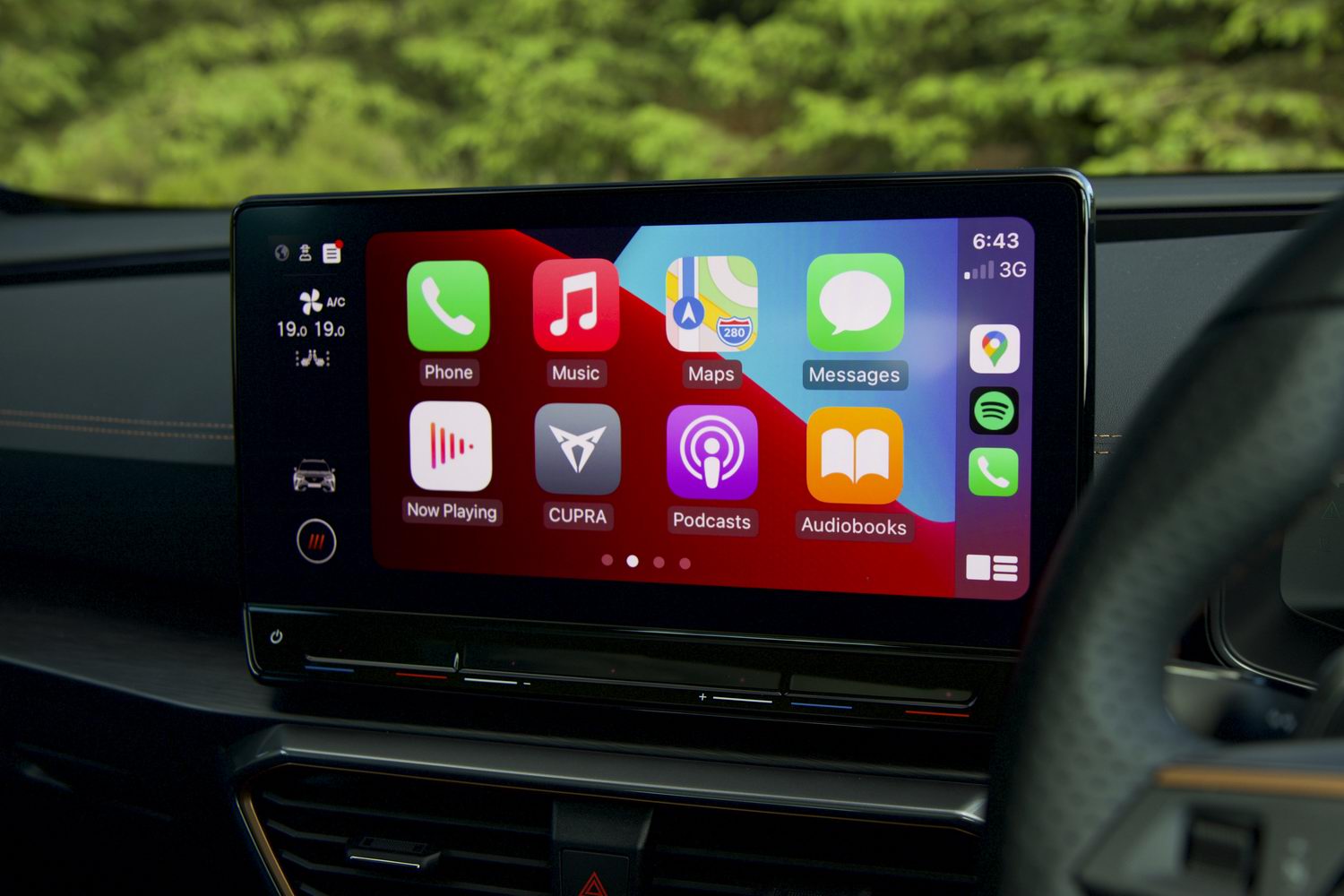 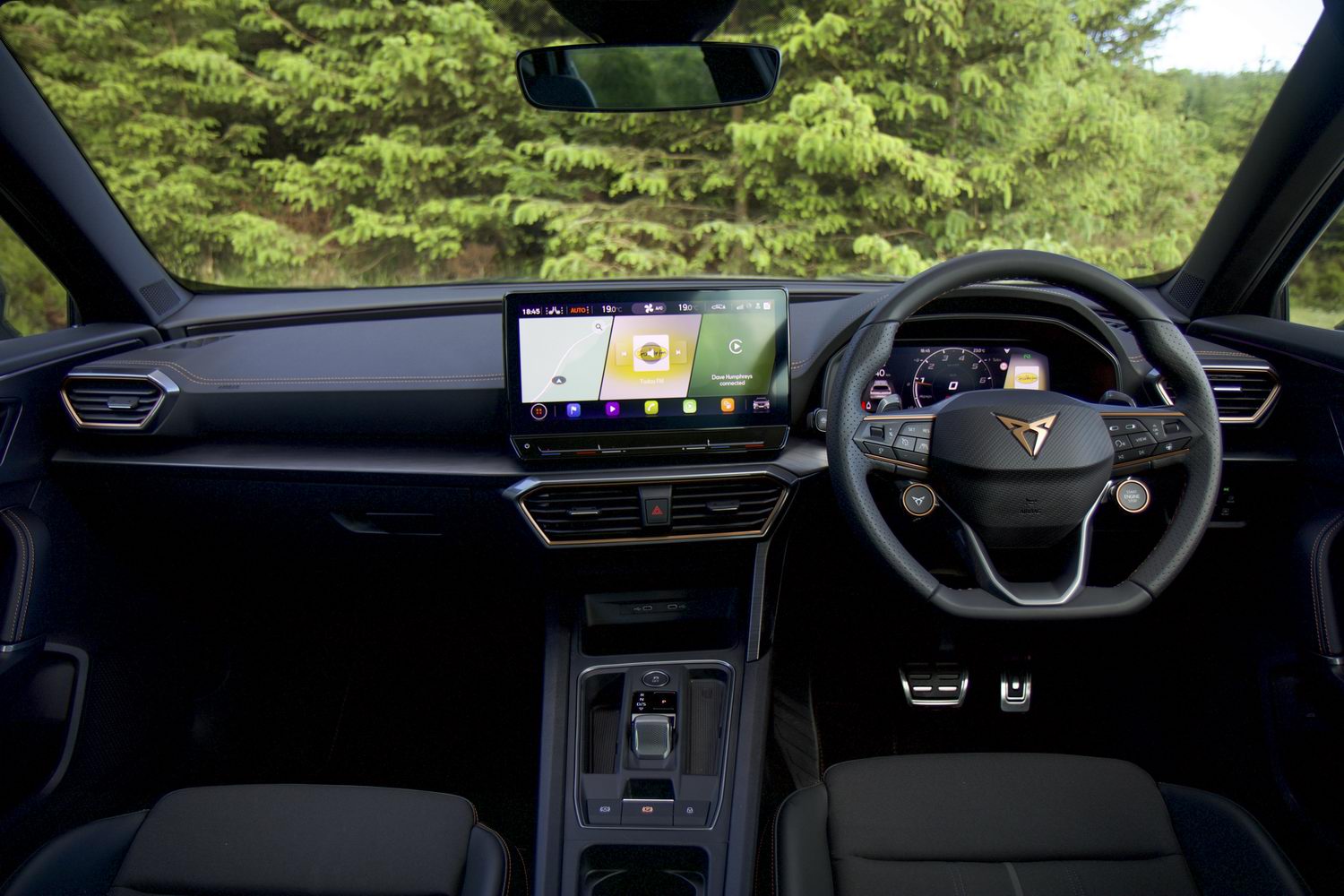 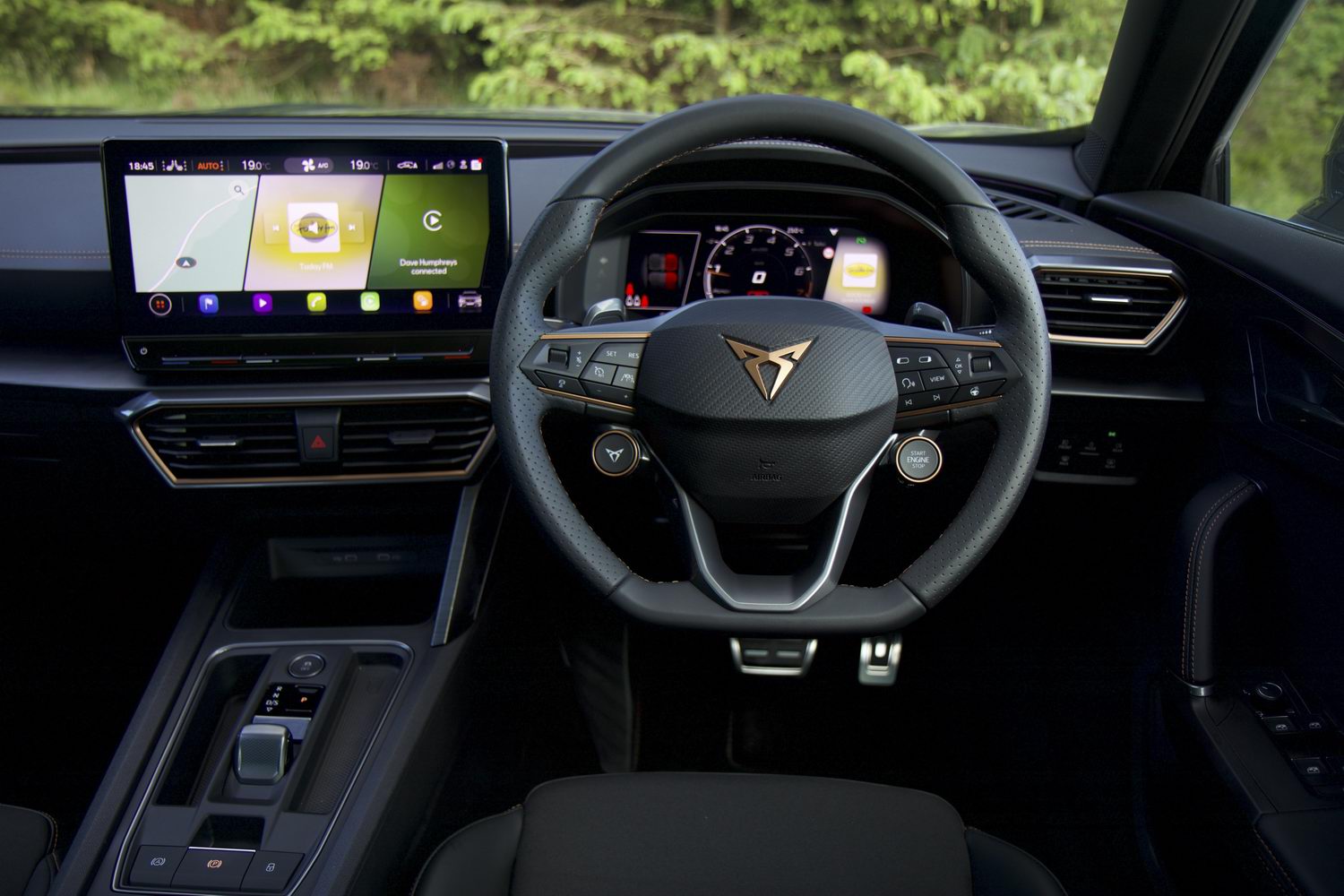 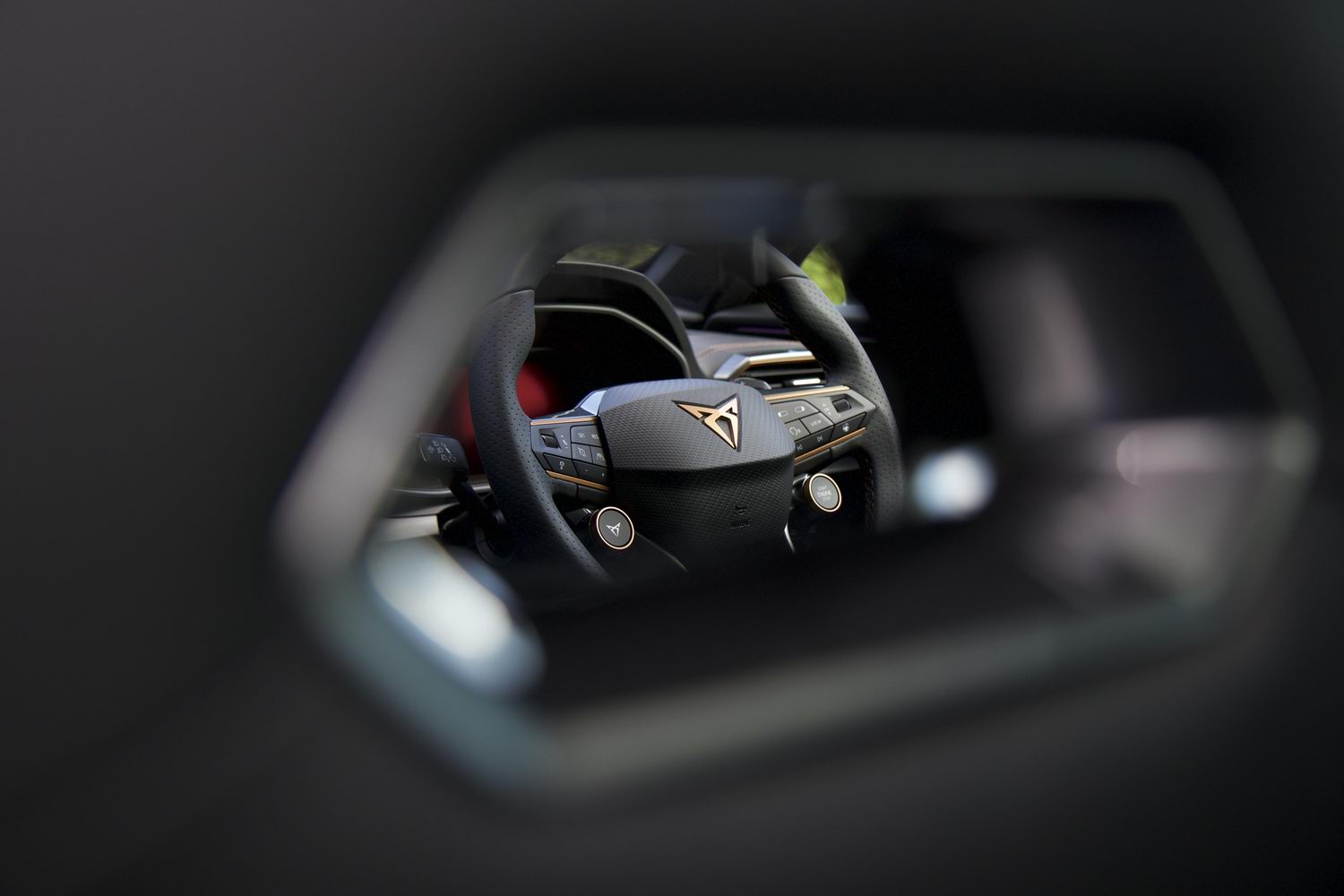 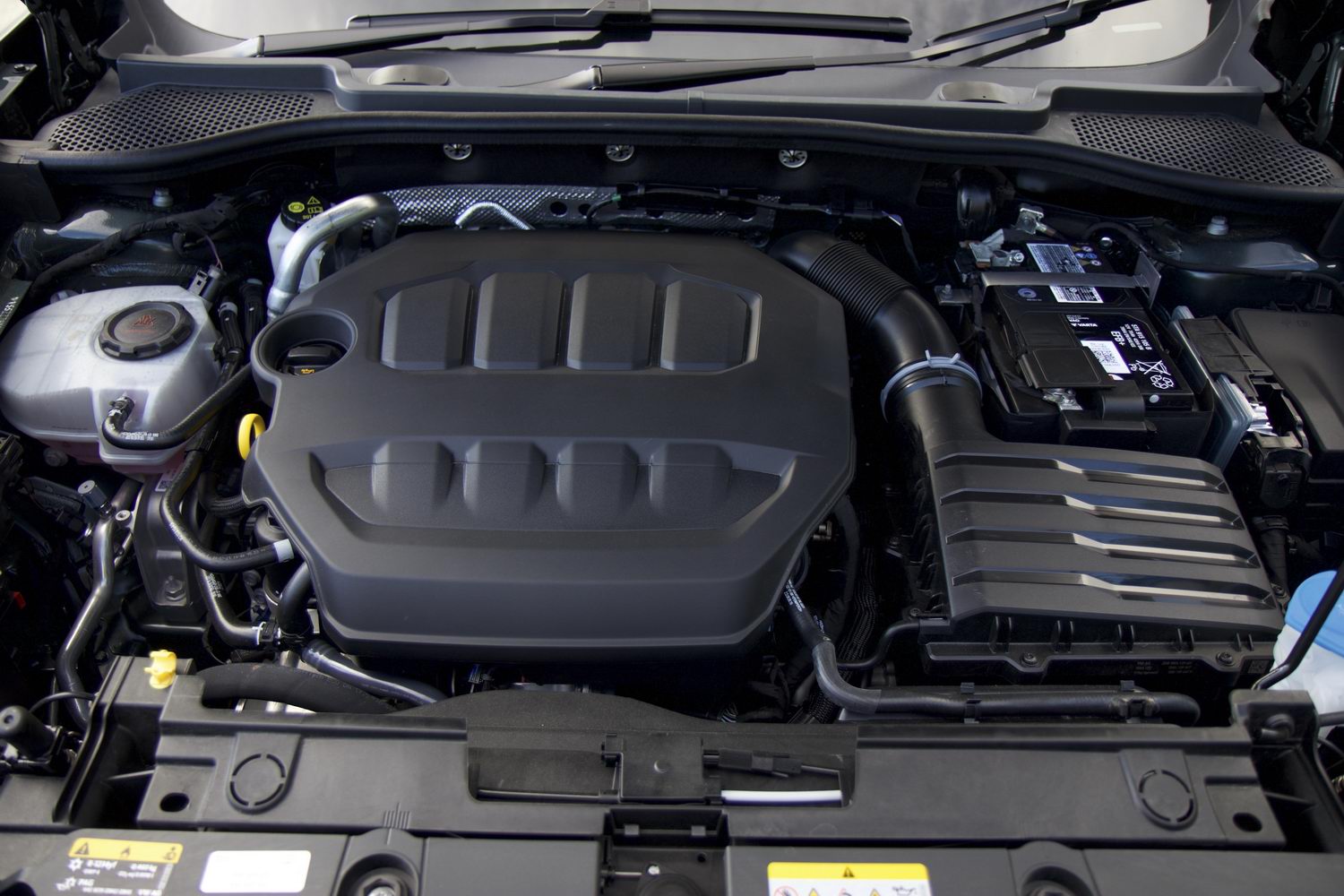 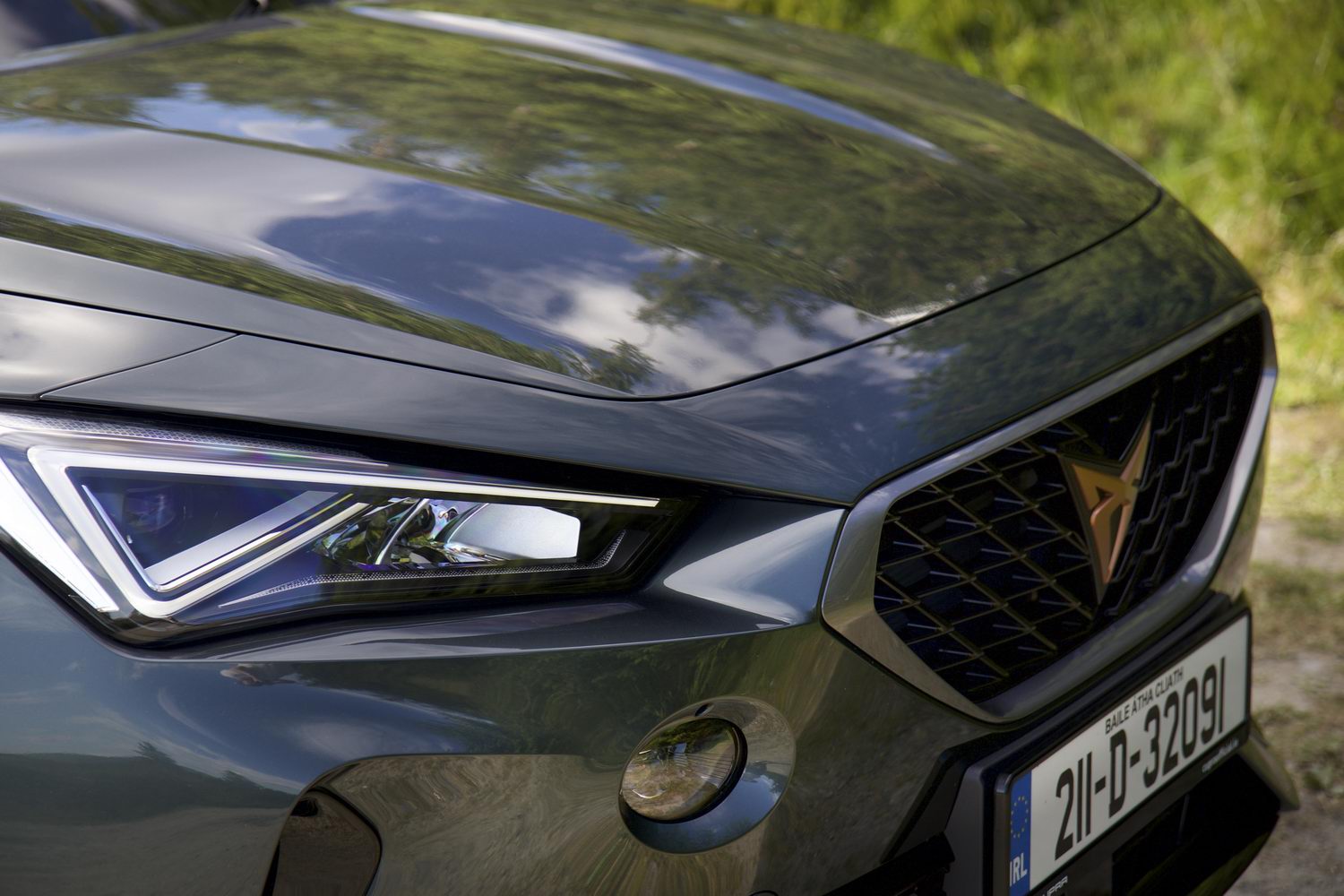 Cupra's first standalone model gets a powerful, 310hp, four-wheel-drive version. What's it like on Irish roads?

I guess the big question is, what the heck is a Formentor? Well, it's Cupra's first standalone model. The brand, spun off from SEAT to be a pricier, more profitable high-performance and electric brand had, until the Formentor came along, simply been making hotter versions of regular SEATs. The Formentor - for all its visual similarities to some SEAT models, both inside and out - is at least unique, and won't be sold with a SEAT badge.

This is the top-spec VZ model, powered by the 310hp version of the familiar Volkswagen Group 2.0-litre TSI turbocharged petrol engine, essentially lifted from the VW Golf R. It also gets four-wheel drive, and the seven-speed DSG gearbox. It's not - technically - the top of the Formentor range, but the extremely limited edition 385hp VZ5 model, which uses Audi's 2.5-litre inline-five turbo engine, won't be coming to Ireland, so for us, effectively, it is.

Given that it's a standalone, high-performance model, you can pick up a Cupra Formentor for a relatively affordable price tag. The range kicks off with the 1.5 TSI model, with a manual gearbox, for €37,135. If you want to add a DSG automatic to that, it'll be €40,885. Standard spec at this level includes 18-inch alloy wheels, sports seats, a ten-inch touchscreen and full LED headlights. I guess it's debatable whether 150hp is quite enough power for a supposed performance car, but the 1.5-litre engine is smooth and willing, so it's hardly disgraced. Emissions range between 141g/km and 153g/km, so it's not too steep in terms of tax.

Next up is the Formentor plug-in hybrid. That costs from €44,895 for the basic model, or €55,130 in VZ spec. VZ spec adds 19-inch wheels, a 12-inch infotainment screen, more in the way of advanced electronic driver aids (including lane-keeping steering, active cruise control and a parking aid), sportier bucket seats and heftier Brembo brakes for a bit more in the way of stopping power. The hybrid Formentor has CO2 emissions as low as 26g/km.

There are, in some markets, diesel Formentors, with the 2.0-litre TDI Evo engine, but they're not offered here in Ireland. Which brings us to our test car - the VZ-spec 310hp version with a starting price of €64,425 and which, thanks to a couple of options, was priced at €68,316 as tested.

With Cupra's current offers, you can finance a Formentor with repayments starting from €359 per month on a 2.9 per cent APR PCP scheme. That includes a Cupra complimentary care pack, which covers your first three years' servicing and gives you a Cupra courtesy car when yours needs to head to the garage.

It's worth checking out Cupra Ireland's website for up-to-date offers.

In many ways, the Cupra Formentor's cabin is hugely impressive. It's all well made, and the material choices are - for the most part - nice. There's a seam running across the centre of the dash, finished in Cupra's signature copper colour, that adds a little bit of visual interest, and the 12-inch touchscreen of our test car certainly looks good. The Formentor VZ's bucket seats too are really good - high backed and hugely supportive, but with just the right amount of squish for long-haul comfort.

In front of the driver, there's a 10.25-inch digital instrument panel, lifted from the SEAT Leon, that looks crisp and which allows for quite a bit of personalisation in the layout and the information offered.

There are no fewer than four USB plugs - two in the front and two in the back - but they're all USB-C connectors, so you might need to buy some adaptors. Optionally, you can have the 'Full Link' setup, which gives you wireless connections for both Apple CarPlay and Android Auto, and there's also an optional 'wireless box' that includes a wireless phone charger and which amplifies the phone's signal through the car's own antenna.

This is all good, but the Formentor's cabin does run up against a bit of a problem. You see, aside from the twin-pronged Cupra badge, there's precious little to tell this Cupra's insides apart from those of a humble Leon. The shapes, surfaces and switchgear are all the same. That's fine in a basic €37,000-odd Formentor, but it's far less acceptable at this price level.

Then there's the space in the back, which is reasonable, but perhaps not that great. Part of that is down to perception - you assume from the chunky styling and the price positioning that the Formentor is going to be a big, roomy SUV, but it's not. Actually, it's really more of a hatchback crossover, closest in physical terms to the likes of a Subaru XV, and so it ends up being less spacious in the back than you think it's going to be. On the upside, there are ISOFIX points for child safety seats in the outer two rear seats, and in the front passenger seat.

The boot is even worse off in that respect. A basic 1.5 TSI Formentor gets a reasonable 450-litre boot, but because of the packaging needs of this 310hp model's rear differential, that drops to 420 litres, which is only just about acceptable, really. It's even worse for a hybrid Formentor buyer - they have to make do with a puny 345-litre boot, which is less space than you get in the Leon hatchback.

At least the split-fold rear seats fold flat to help you increase the boot space when you need to. Nonetheless, we reckon the Leon Sportstourer estate is a much better bet if you want to carry large loads in the back.

While we're looking at niggles, although the 12-inch screen looks good, and the graphics are suitably rich and expensive looking, the menu logic and layout is all over the place, making it too difficult to find the function you need at times. Having the heating, ventilation and air conditioning controls on the screen is also less than satisfying.

If, in terms of practicality and cabin design, the Formentor slips a little, then in terms of how it drives, and how it performs, it's on much firmer ground.

Familiarity with the Volkswagen Group four-cylinder turbo engine has certainly not bred contempt, and with that big 310hp power figure, and 450Nm of torque, there's no doubting its potency. Dial up Sport mode and the Formentor rips through its seven forward gears in one big lunge, with a growling, snorting soundtrack to match. Not very eco-friendly, nor hardly socially responsible, but enjoyable all the same.

The standard-fit four-wheel drive helps marshal all that power neatly onto the road and, even in sopping wet, slippery conditions, the Formentor should give you no cause for alarm, as it seems capable of sniffing out whatever grip and traction is available.

It's not the most communicative car, in terms of steering feel and response - in fact, it's quite numb at the wheel rim, but the weighting is surprisingly light, and so the Formentor swings easily and briskly into an apex, and in spite of the lack of feel, you do learn to trust that it will grip and bite.

The best part of the Formentor's dynamic repertoire are the adjustable suspension dampers. These allow you to firm up the Formentor for press-on driving, but actually that's the wrong thing to do. You see, there are pre-set settings for Comfort, Normal and Sport modes, but if you delve into that confusing touchscreen layout, you'll find that in the Individual mode setup, there's actually a suspension setting that's one softer than the standard Comfort. Pick that setting and don't use any other. It does mean that the Formentor leans a little more than you might expect, but the trade-off is that it feels surprisingly supple and forgiving on broken Irish tarmac. In fact, in this mode, you end up making better progress because you're not constantly having your eyeballs rattled by rock-hard dampers.

Actually, oddly, when you set it up like this, the Formentor feels - almost - like an old-school 4x4 to drive. You have that same sensation of a square(ish) body, light steering, all-wheel grip and low-down torque. It doesn't quite replicate the experience of driving an old Land Rover, but there's more connective tissue to how it feels to drive than you might expect. The visibility is also great, even given the chunky, angled C-pillar, and we love the way you can see the corners of the Formentor's bonnet from the driver's seat.

The downside to all of this is its fuel economy. Use even the tiniest fraction of the Formentor's accelerative ability, and it gets very, very thirsty. We averaged 9.0 litres per 100km over a week, which is OK, given the official 8.2 litres per 100km figure, but still nothing to shout about. Maybe go for the hybrid and put up with the tiny boot?

Alternatives to the Cupra Formentor

Finding alternatives to the Formentor is no easy task, as it's close to being unique right now. A Mercedes-AMG GLA 35 has broadly similar ideas behind it, but is more expensive again and more powerful. The Golf R is lower, sleeker, has sharper handling, and is arguably more desirable. A Subaru XV is the closest in terms of body style and layout, but there's no hot turbo XV model (more's the pity) so that's not really right. The Cupra Leon Sportstourer estate is the closest rival - it uses all the same mechanical bits and pieces, but with a roomier, more practical (if stylistically less desirable) body.

Our verdict on the Cupra Formentor

It's still kind of hard to tell exactly what the Cupra Formentor is and to whom it's trying to appeal. It's not practical enough to be a high-powered family car, and it's too expensive - in this form - to appeal to hot-hatch fans. It is fast, and fun, really handsome (especially so in this optional 'Camouflage' green paint - all cars should be this colour), well-made and kind of cool - in an oddball sort of way. It is too thirsty and expensive in this form, though, which may limit its appeal.

Perhaps in trying to plough its own very distinct furrow, the Formentor is appealing to no-one in particular, which in some ways makes it all the more appealing again. A car that just gets on with doing its own thing and not paying too much attention to what others are up to, is very appealing in its own right.

What does the rest of the team think?

The Cupra Formentor VZ turned out to be quite a pleasant surprise. We've become accustomed to 300- or so horsepower crossovers these days (bizarrely) and, while the 2.0-litre TSI engine can feel a bit flat in most applications, the overall setup of the Cupra compensates. It rides incredibly well for a tuned-up crossover, absorbing and smoothening out surface imperfections with ease. The result is a package that comes together well to make its performance as enjoyable as it is exploitable.