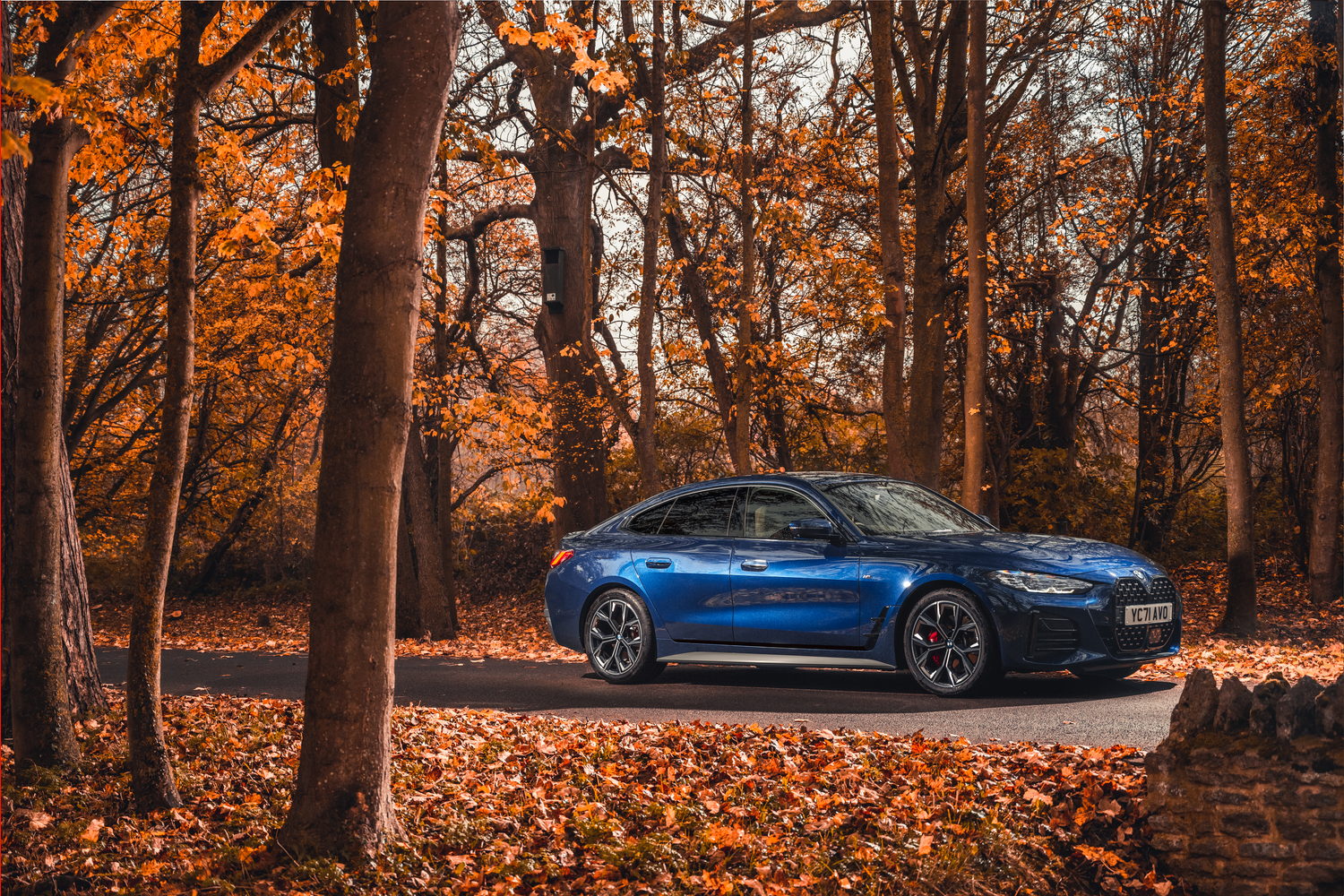 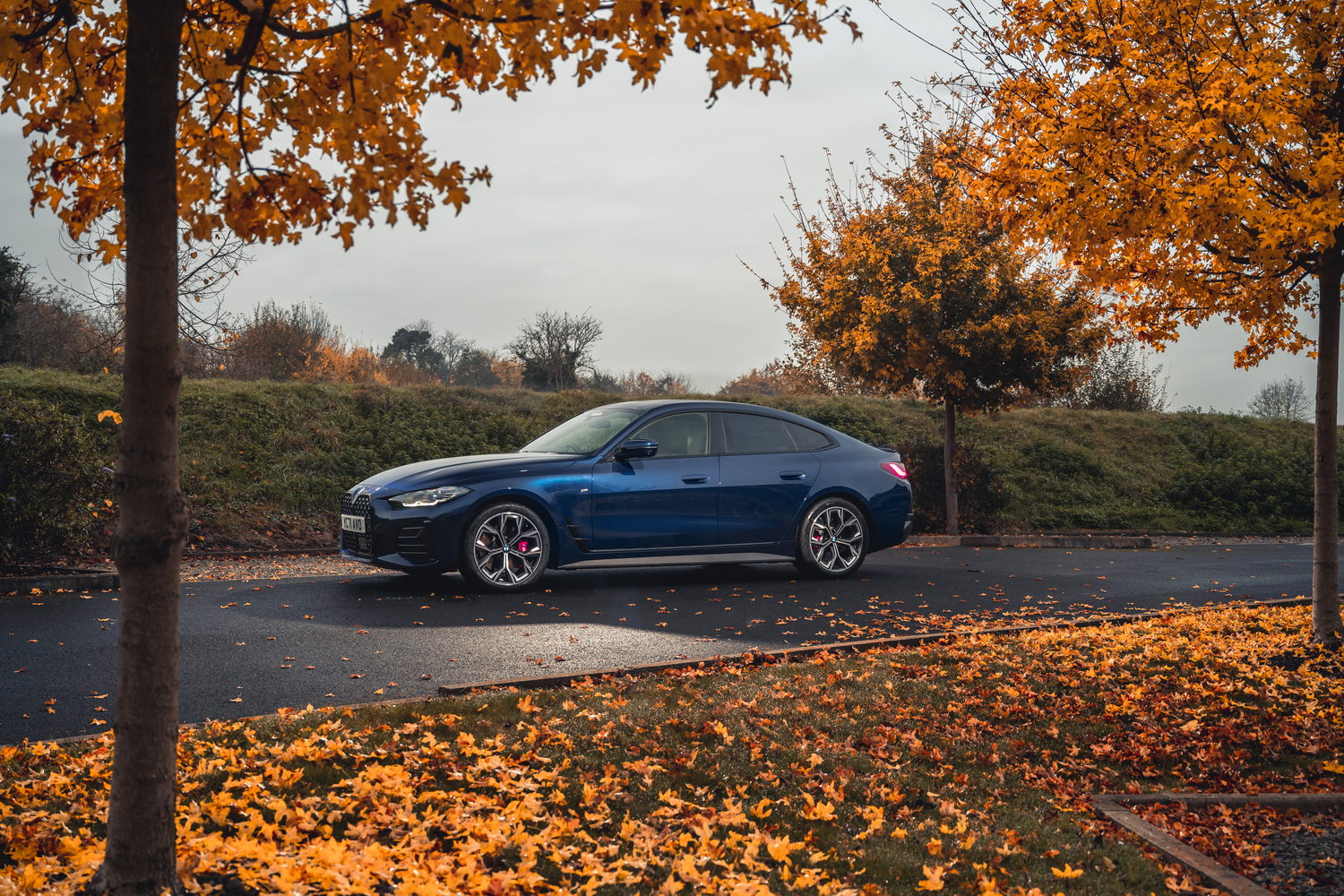 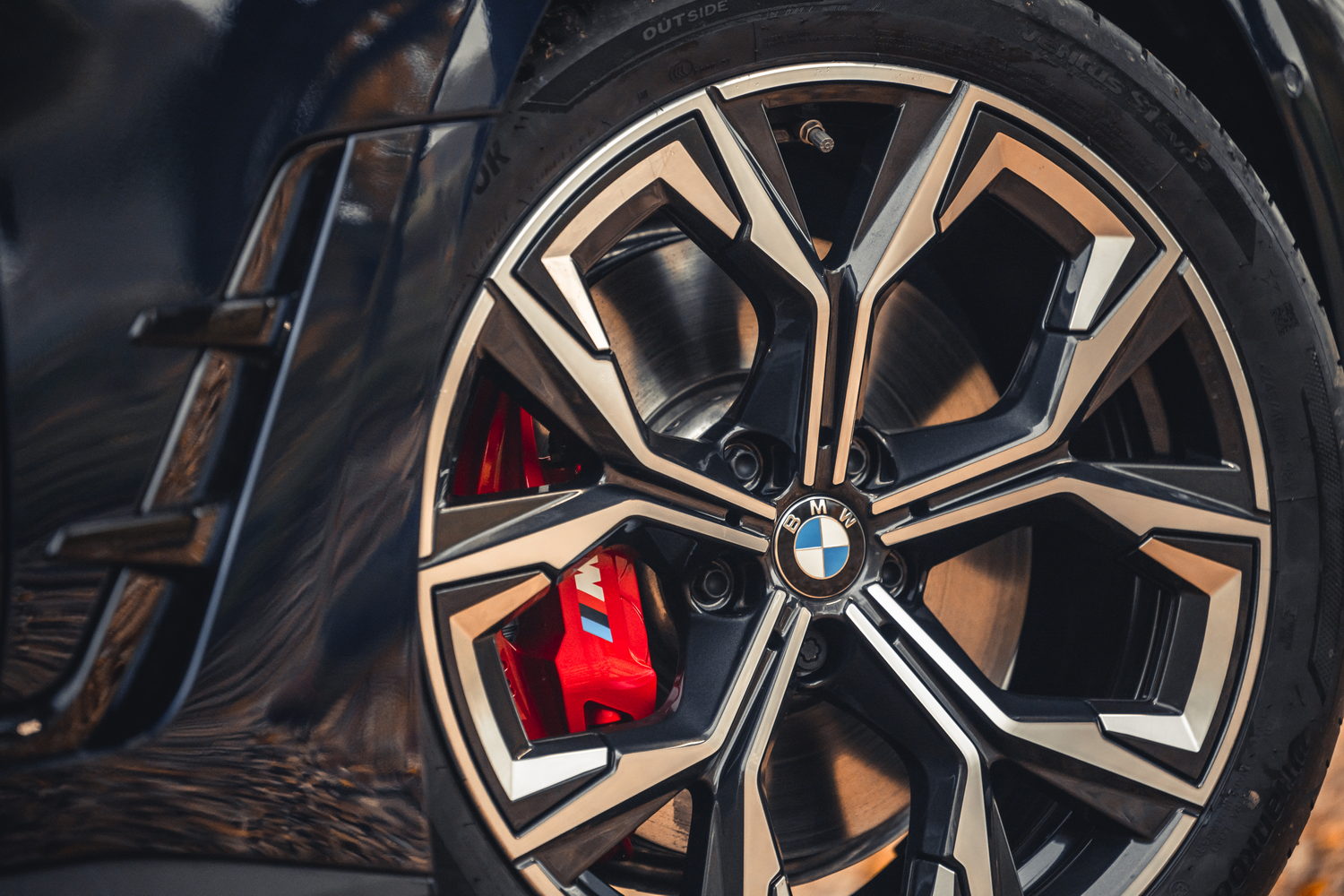 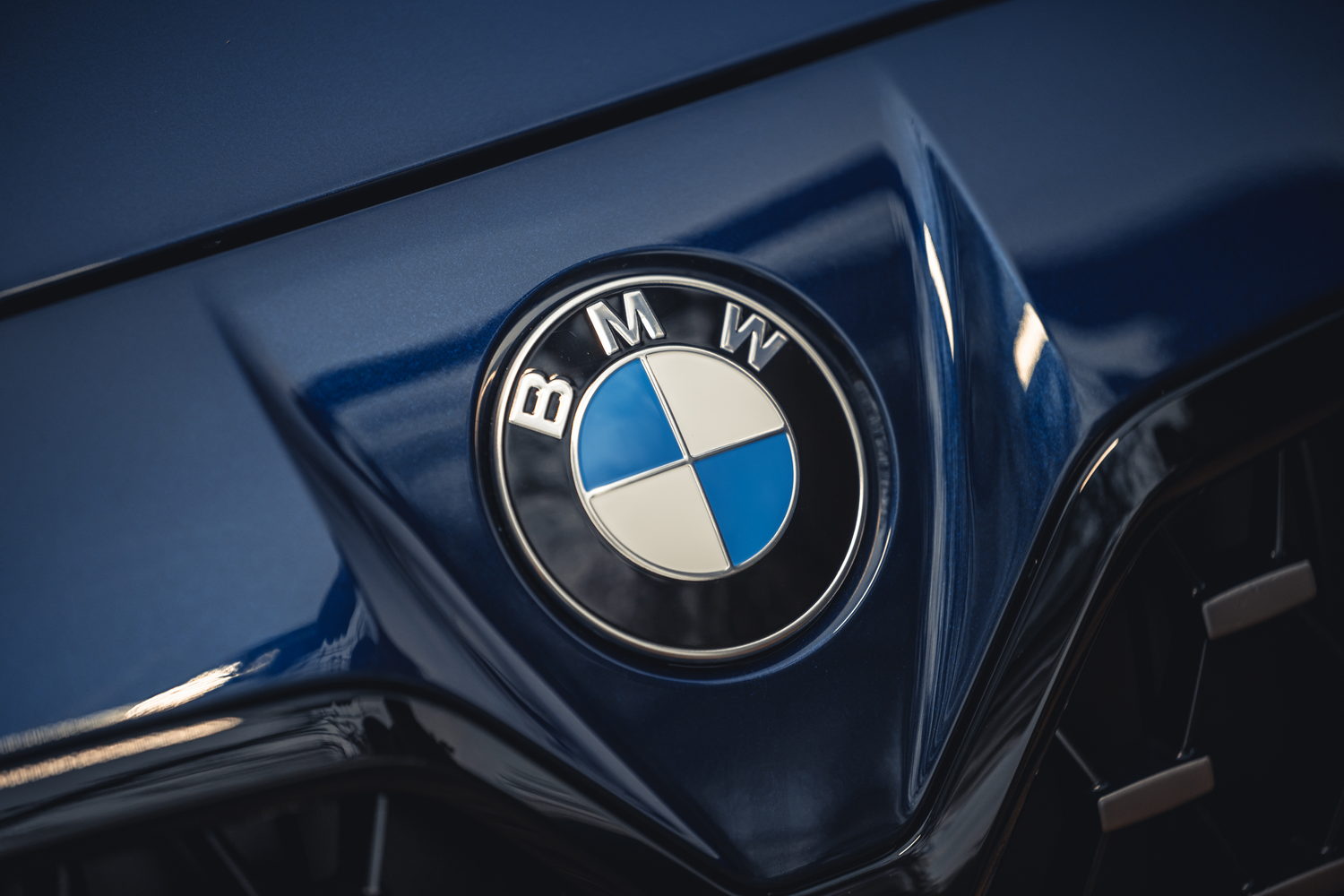 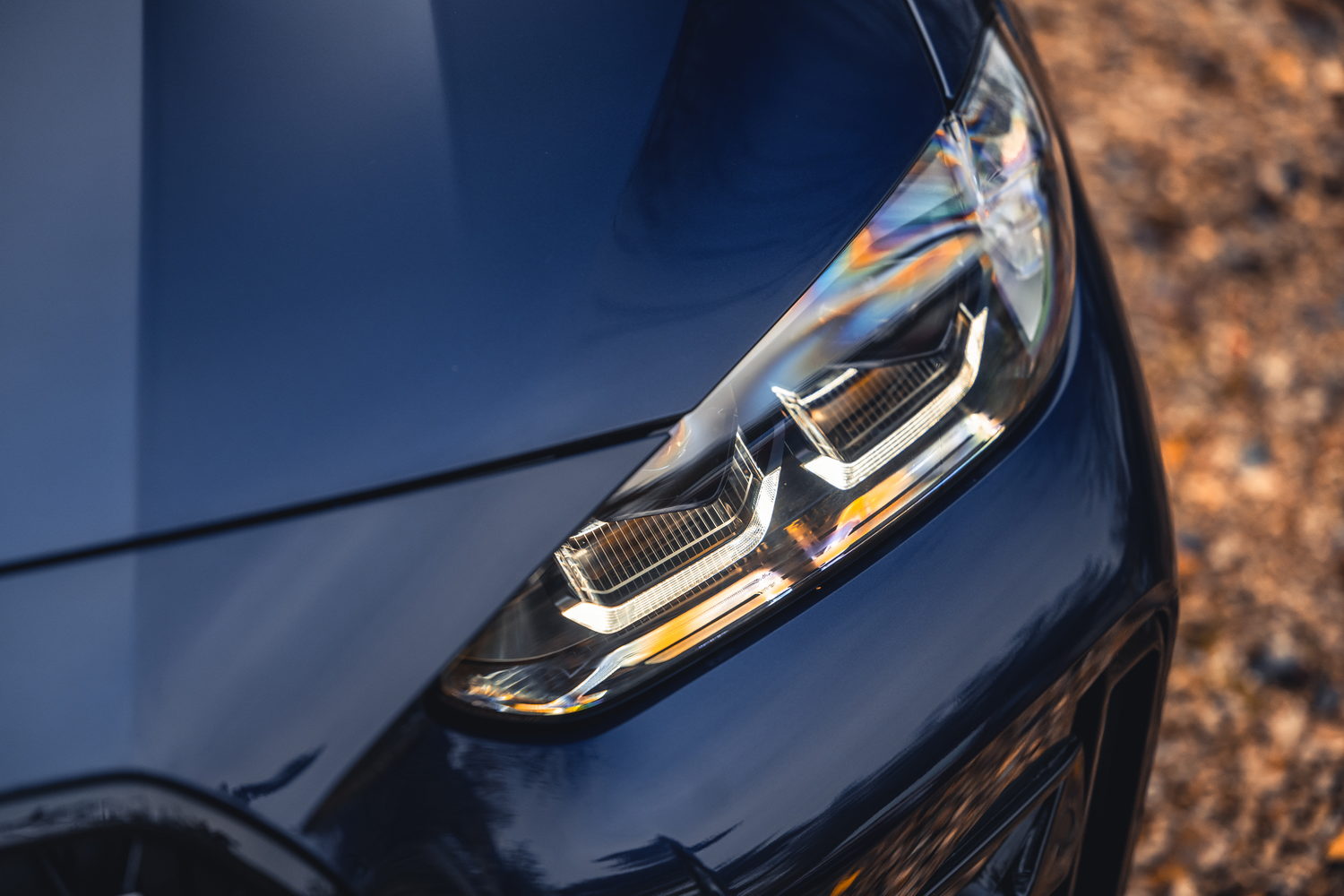 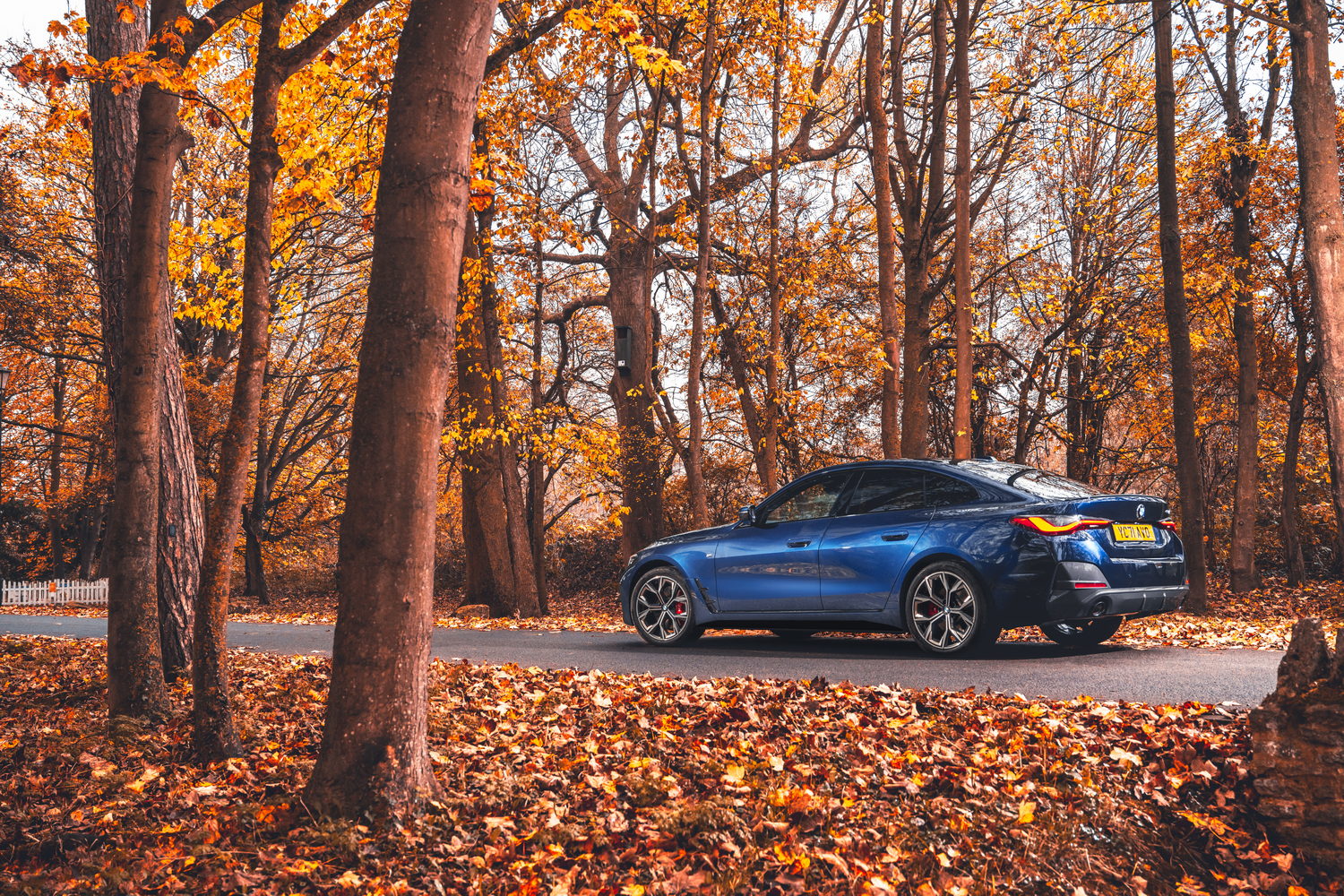 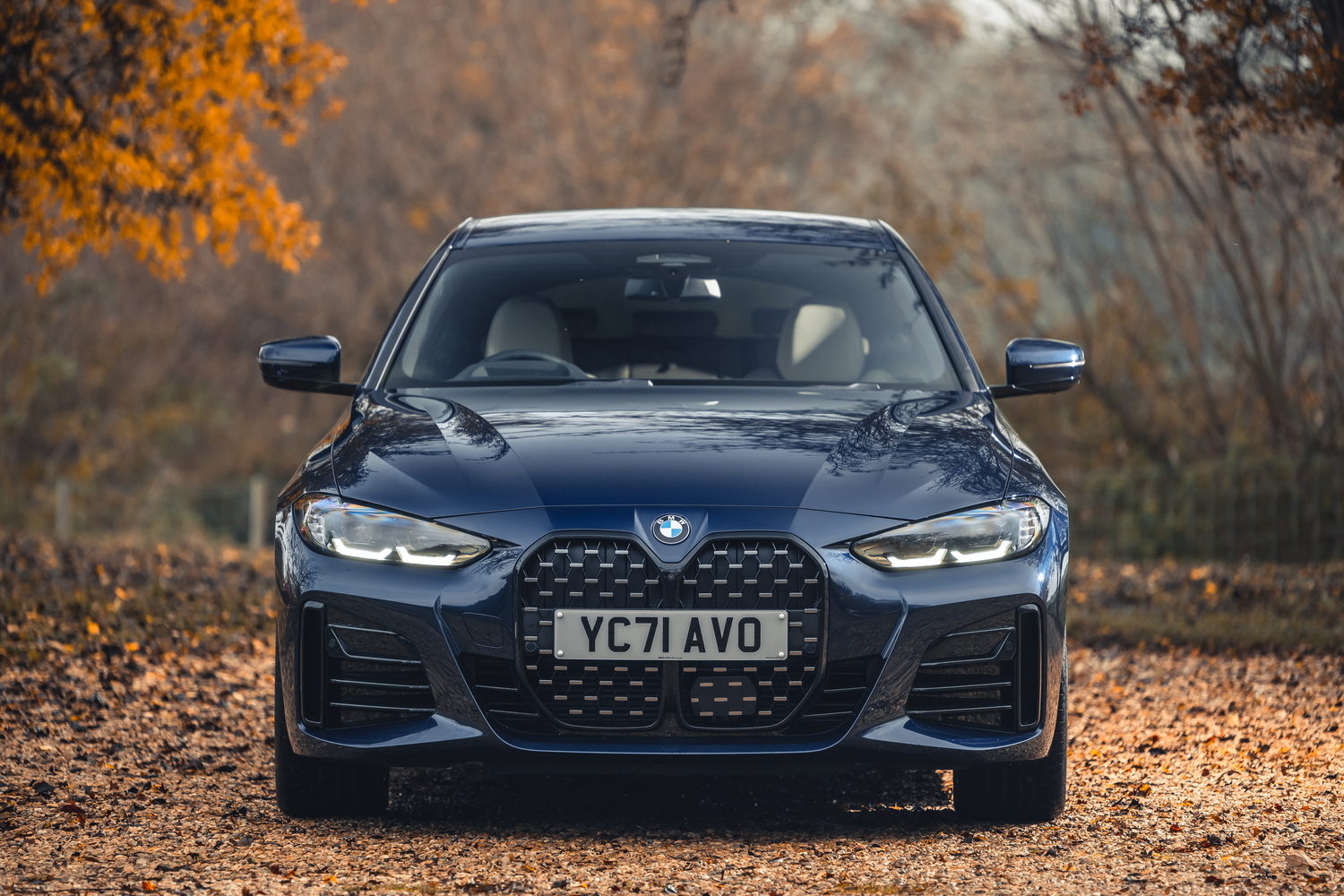 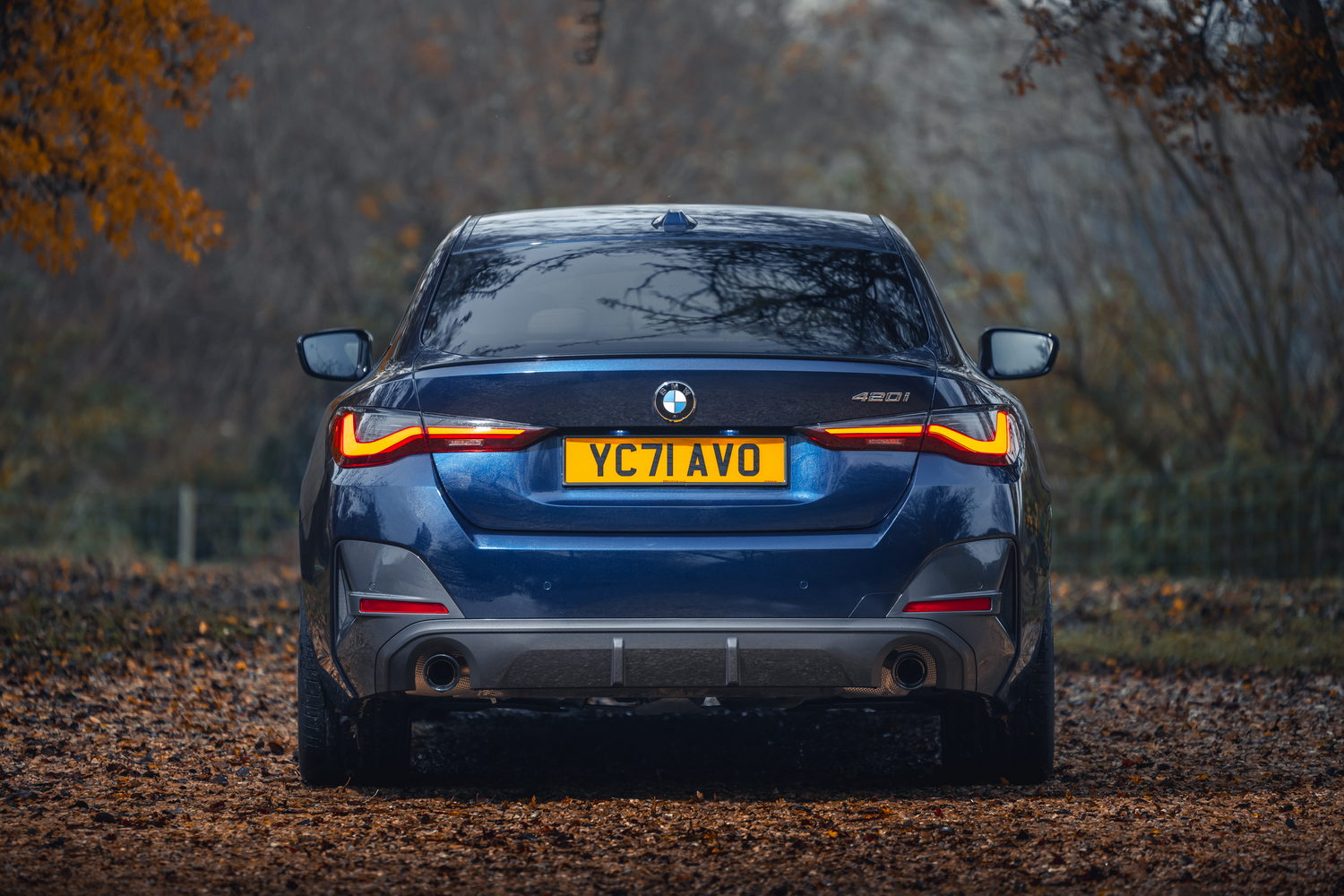 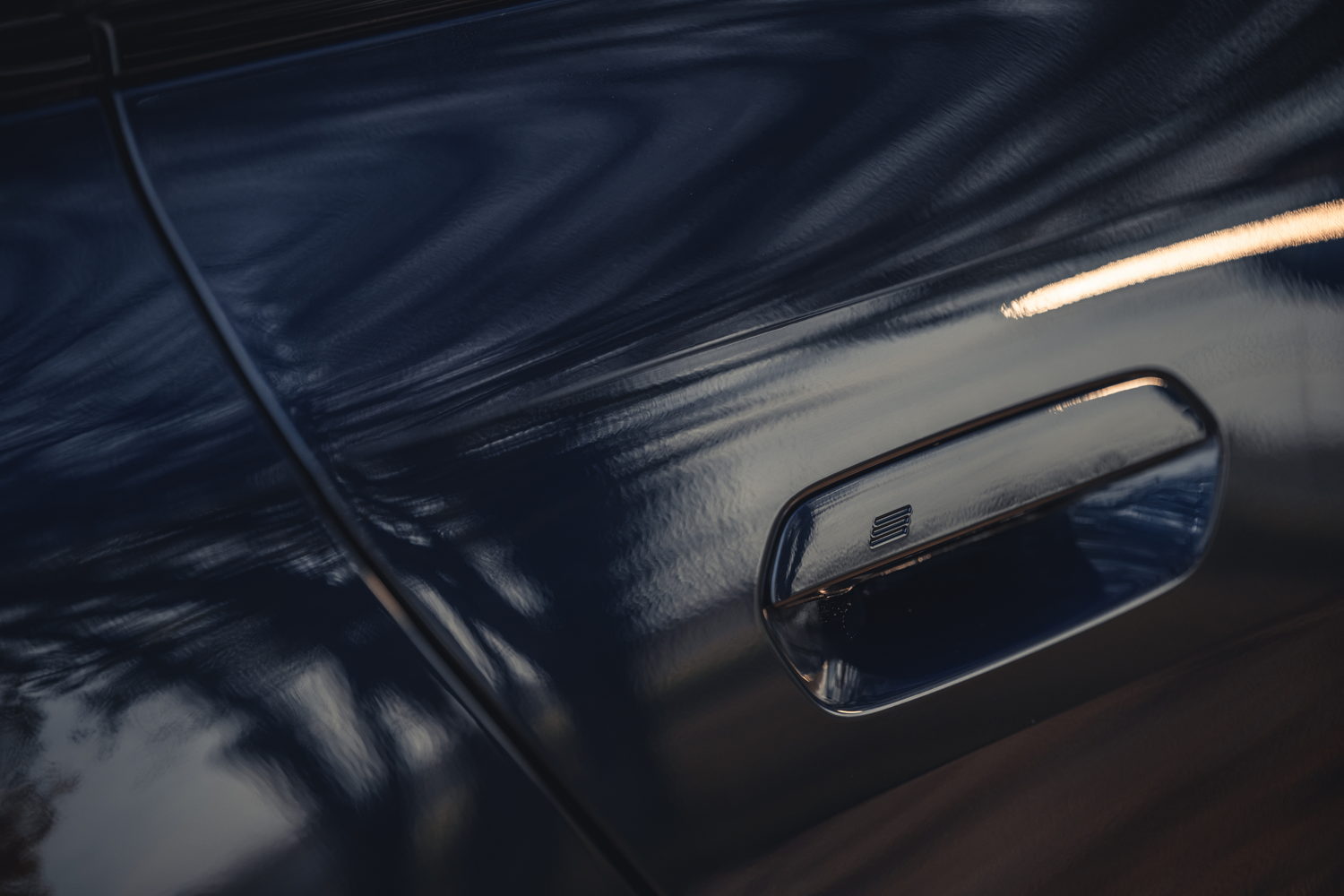 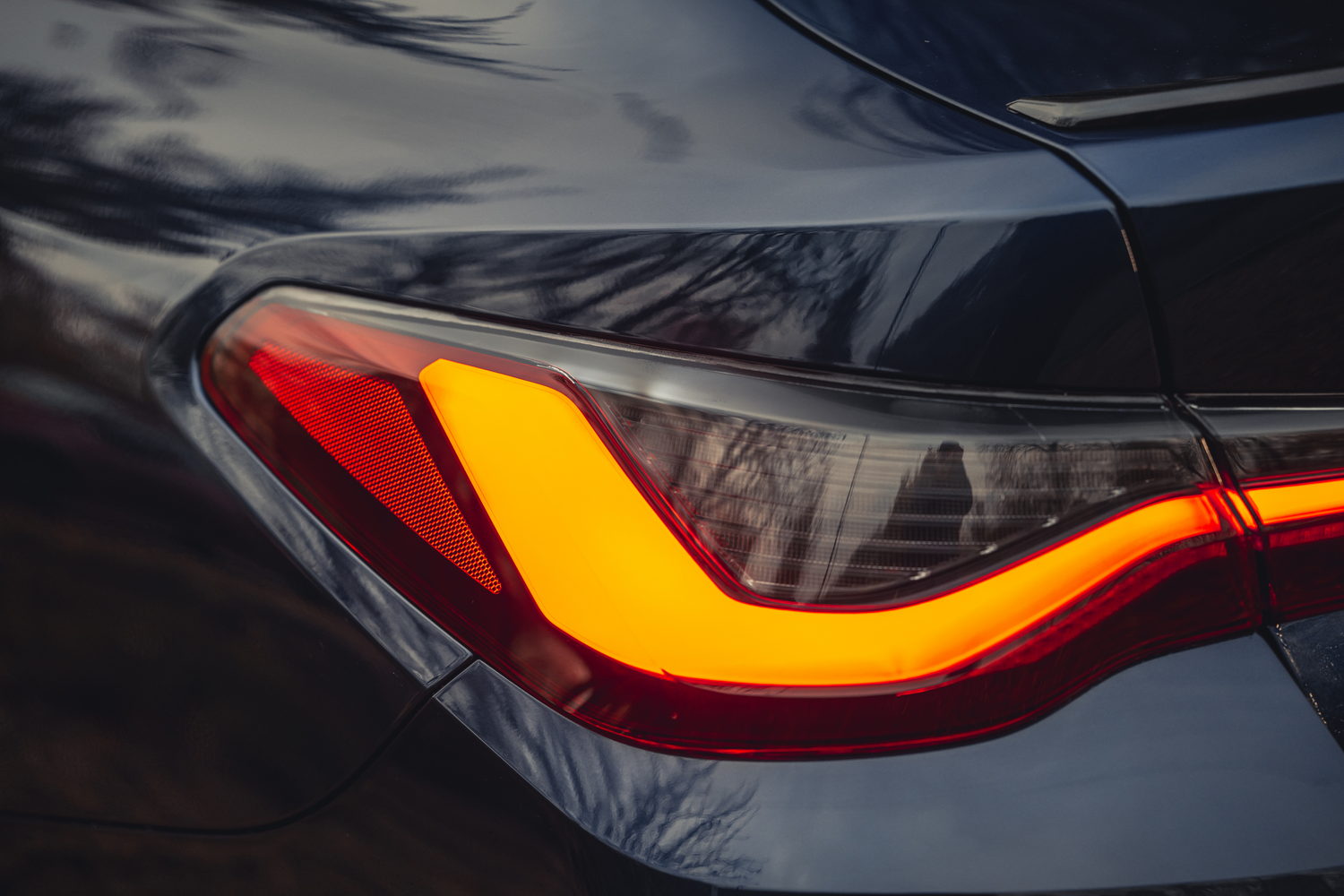 The 4 Series Gran Coupe body adds more practicality, but is it worth a €5,000 premium over the 3 Series?

Let's shoo the elephant out of the room straight away. The 4 Series' enormous grille is challenging, and plenty of customers will probably be put off immediately. Some members of the CompleteCar.ie office certainly are. But others will like the way it marks the 4 Series out from the more conservative 3 Series and gives that front end a little bit more menace. It's worth seeing in the metal before deciding, because pictures don't do it justice.

Right, we'll have no more chat about that grille. The 4 Series is designed to offer some of the two-door 4 Series Coupe's more rakish and elegant styling features without sacrificing (too much) the practicality of a four-door 3 Series Saloon. Generally speaking, it looks great, although there is perhaps a little too much bulk around the rear of the car still.

There are fewer questions about the 4 Series Gran Coupe's interior, where the traditional BMW quality is abundantly clear. The materials are great, the switches feel perfectly engineered and the technology is first rate. The digital instrument cluster is a little fussy looking, but otherwise that and the iDrive infotainment system are faultless, setting the benchmark by which all other in-car infotainment tech is measured.

Similarly, the ergonomics of the 4 Series Gran Coupe cabin are exquisite, with buttons exactly where you expect them to be. Of course, some might criticise BMW's lack of imagination, because the 4 Series Gran Coupe is laid out exactly like every other BMW in the past 10 or 15 years (including the standard 4 Series Coupe). But if it ain't broke, why fix it?

What BMW has attempted to fix is the 4 Series Coupe's questionable practicality. The rear seats offer a fair amount of legroom in both cars, but the Gran Coupe has more rear headroom and back doors making it much more habitable for passengers. It still isn't as spacious as a 3 Series, though.

Similarly, the boot is slightly more practical, thanks to the hatchback that sees the rear window lift with the boot lid, but the outright space is no more impressive. In fact, the 470-litre boot is just 30 litres larger than that of the Coupe. However, you can fold down the back seats to free up a very useful 1,290-litre luggage bay.

The 4 Series is designed to feel more aggressive and sportier than the 3 Series, and even the more practical Gran Coupe is no exception to that rule. Even in the regular 2.0-litre diesel 420d we sampled, it felt surprisingly firm, even with the suspension in its softest setting.

That said, the ride is perfectly tolerable. It's no worse than an Audi in S line trim or any other coupe with more than a modicum of sporting intent. And our test car had the optional 19-inch alloy wheels, which might not have helped. But even so, the 4 Series Gran Coupe just doesn't feel quite as supple as a 3 Series.

But that won't worry BMW - or its customers - too much. The 4 Series is the sporty sibling, and a firmer ride is exactly what buyers expect. They also expect the sublime handling that has become a trademark of the BMW range, and the 4 Series delivers, making up for its stiffer ride with improved body control and almost uncanny agility.

The old 4 Series was good, but the new model has beautifully precise - if slightly over-assisted - steering and effective, powerful brakes. And although the 3 Series does a great job of preventing the body from leaning too much in corners, the 4 Series feels even tighter and more stable. Even with the extra weight of the Gran Coupe bodywork hanging out near the rear axle.

The way this car turns corners is unbelievable, giving the sensation that it's simply pivoting around the driver's hips exactly when you want it to. The grip from those tyres is prodigious, and the optional xDrive all-wheel-drive system does brilliantly to provide security on greasy roads while still offering the balance of a well-sorted rear-wheel-drive car.

We can't go without mentioning the engine range, because that's another of BMW's big selling points. We sampled the standard '20d' diesel engine, which has long formed a mainstay of the 4 Series range and is now fitted with mild-hybrid technology to make it smoother and more efficient. Like every other engine in the range, it also comes with an eight-speed automatic gearbox as standard.

It's an incredible engine, considering its lowly position in the 4 Series range, and it creates very little noise when on the move. It is a bit grumbly when it's cold, but once it's warm it's hardly noticeable. Unless, of course, it needs to gird its loins and release all of its 190hp. Then it can take the 4 Series Gran Coupe from 0-100km/h in just over seven seconds. Driven more sedately, it'll burn diesel at the rate of between 4.8- and 5.4 litres per 100km.

Elsewhere in the range, there's a selection of 2.0-litre petrol engines (the 420i and 430i with 184 and 245hp respectively) and a 340hp 3.0-litre unit that underpins the M440i xDrive. An M4 Competition version with 510hp might also arrive in the coming months.

But for most customers, that 20d engine will do the job nicely. We tried it with the xDrive system, which only worsens economy slightly but adds a little more security in bad conditions. Commanding a premium of just under €4,000, it seems an expensive way of getting peace of mind, but it might be worth it for those who live in the countryside or somewhere particularly susceptible to bad weather.

Every 4 Series model on sale in Ireland (apart from the M440i and M4 models) comes in M Sport trim, which is among the sportiest and best equipped trim levels in the 3 Series range. Prices start at €59,665, and that pays for 18-inch alloy wheels, leather upholstery and the Live Cockpit Professional infotainment system, complete with a digital instrument cluster and a central touchscreen.

To that standard specification customers have the opportunity to add the Pro Edition package, which ups the price by around €8,000 but offers bigger alloy wheels, black exterior trim and adaptive suspension, as well as M Sport brakes and a choice of the snazzy BMW Individual paint colours.

The Gran Coupe is unquestionably more practical than the Coupe, and there is no great penalty for that improvement. All in all, it's a very refined and luxurious car to drive, and it only costs slightly more than the equivalent 4 Series.

The big problem with the 4 Series Gran Coupe is not its relationship to the 4 Series, but its clash with the 3 Series. With the same engines on board, the 3 Series is considerably cheaper, more practical and more comfortable. It's also similarly pleasant to drive, just as luxurious and you don't get the overgrown front grille. Although whether that's an advantage will be a matter of taste.

Admittedly, the 4 Series is designed to be sportier, but that only really matters when you're in among the go-faster M models. At the 20d end of the spectrum, the 3 Series' comfort should win through.

But customers have always flocked to the sportier looking 4 Series Gran Coupe, and those fans will be satisfied by this new model. Questionable grille aside, it simply refines the Gran Coupe recipe with a smoother mild-hybrid diesel engine and upgraded tech. It's everything you expect it to be. 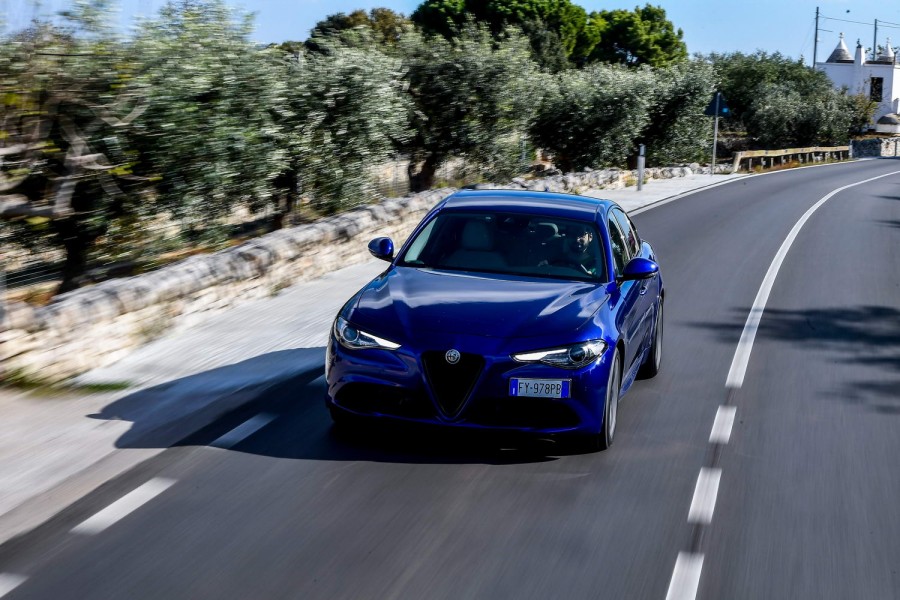 Alfa Romeo Giulia 2.2 diesel (2020) review
Alfa Romeo Giulia vs. BMW 420d xDrive Gran Coupe (2022): okay, the Giulia is technically a saloon, rather than a fastback, but it's so utterly gorgeous that we've forgiven it for that minor transgression. Stunning looks aside, the Giulia is a car that's great to drive, but it can't match the BMW's engine range or the classier interior trim. 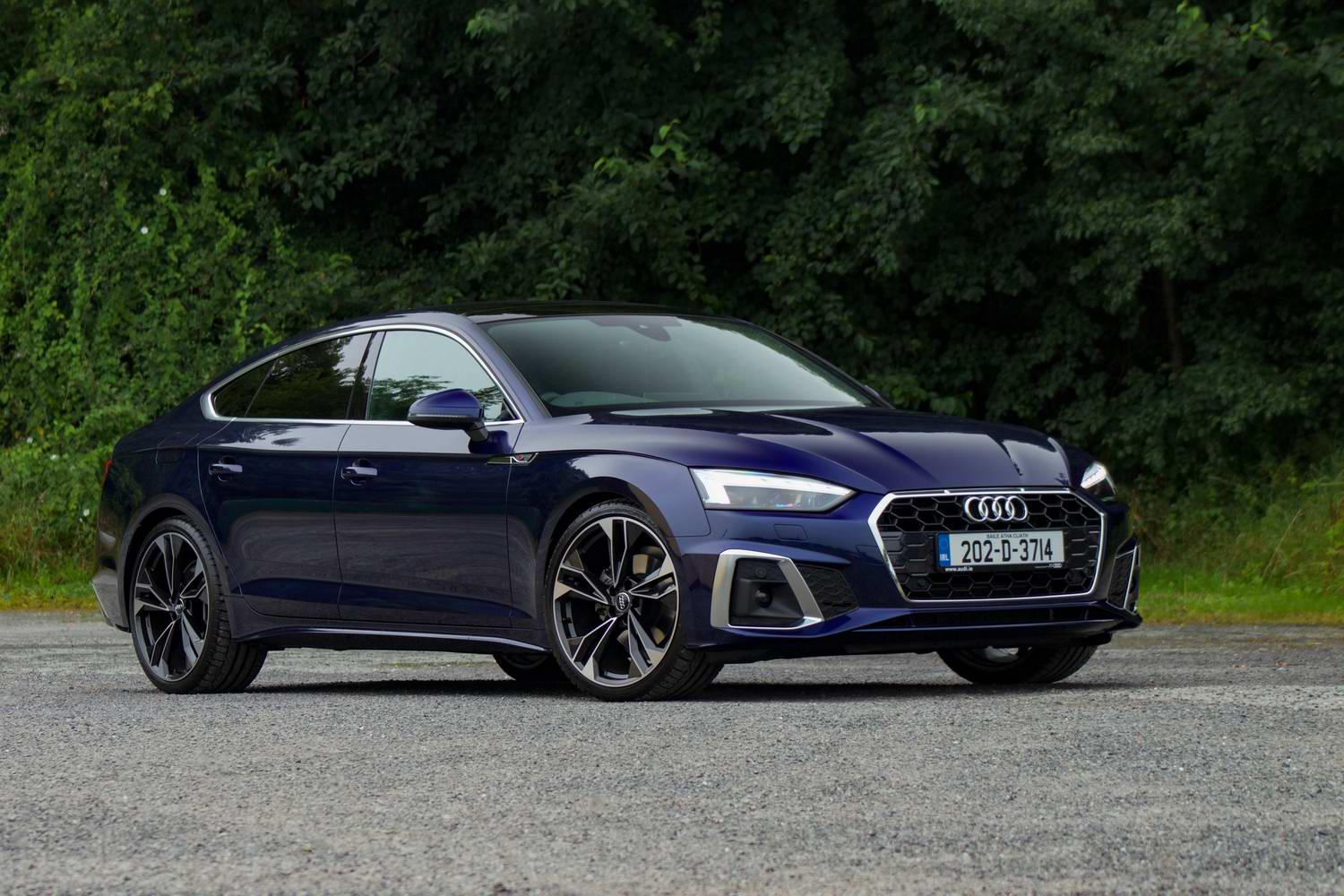 Audi A5 Sportback 35 TDI (2020) review
Audi A5 Sportback vs. BMW 420d xDrive Gran Coupe (2022): the 4 Series' arch-rival, the A5, has also spawned a five-door variant. With an emphasis on style, quality and technology, it fills its brief brilliantly, but it doesn't have the handling to really compete with the much sportier BMW. 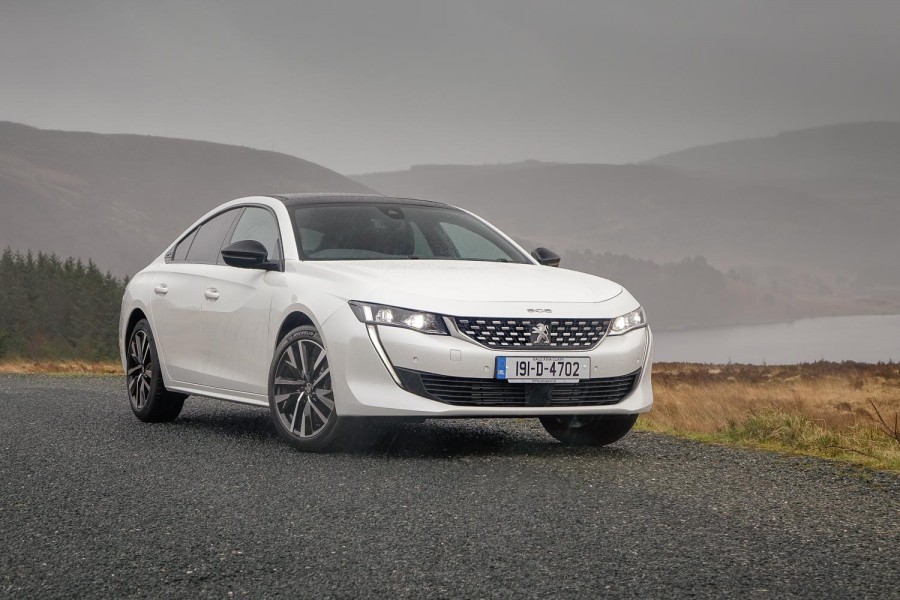 Peugeot 508 1.5 BlueHDi GT Line (2019) review
Peugeot 508 vs. BMW 420d xDrive Gran Coupe (2022): France's answer to the German giants, the 508 is a gloriously styled fastback that wowed everyone when it was revealed. A classy cabin and efficient plug-in hybrid powertrains sell it, but it doesn't have the quality or the poise of the 4 Series.