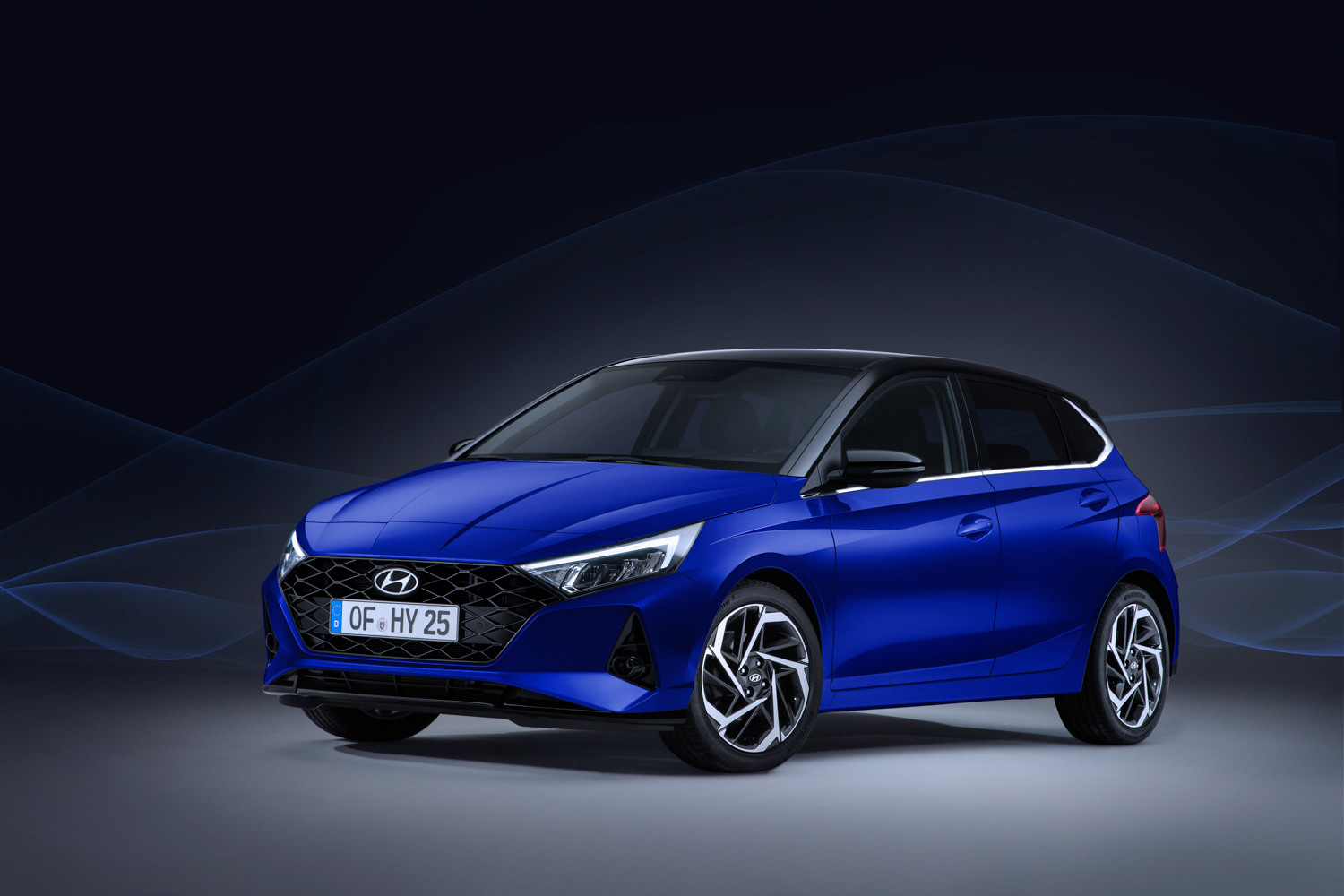 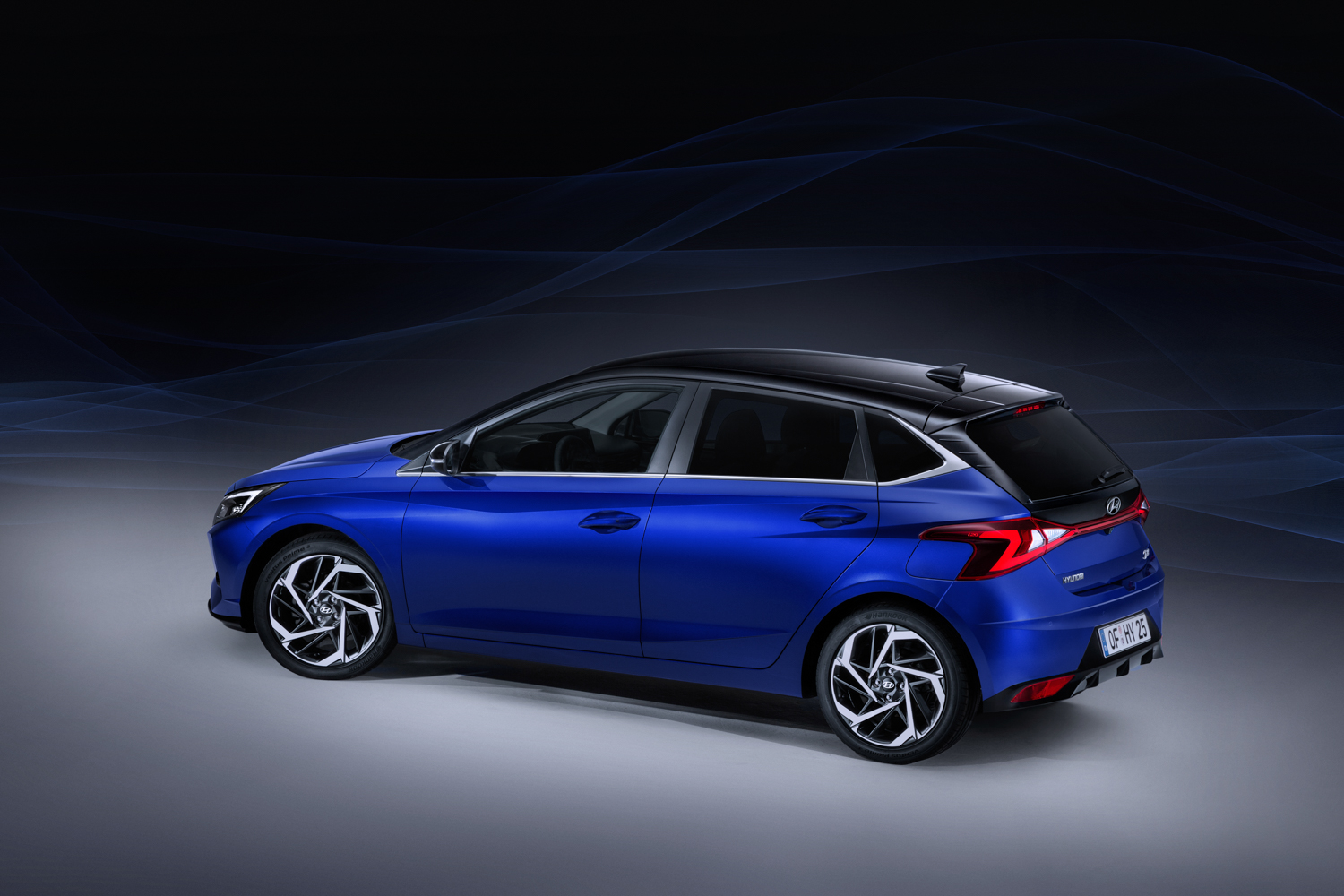 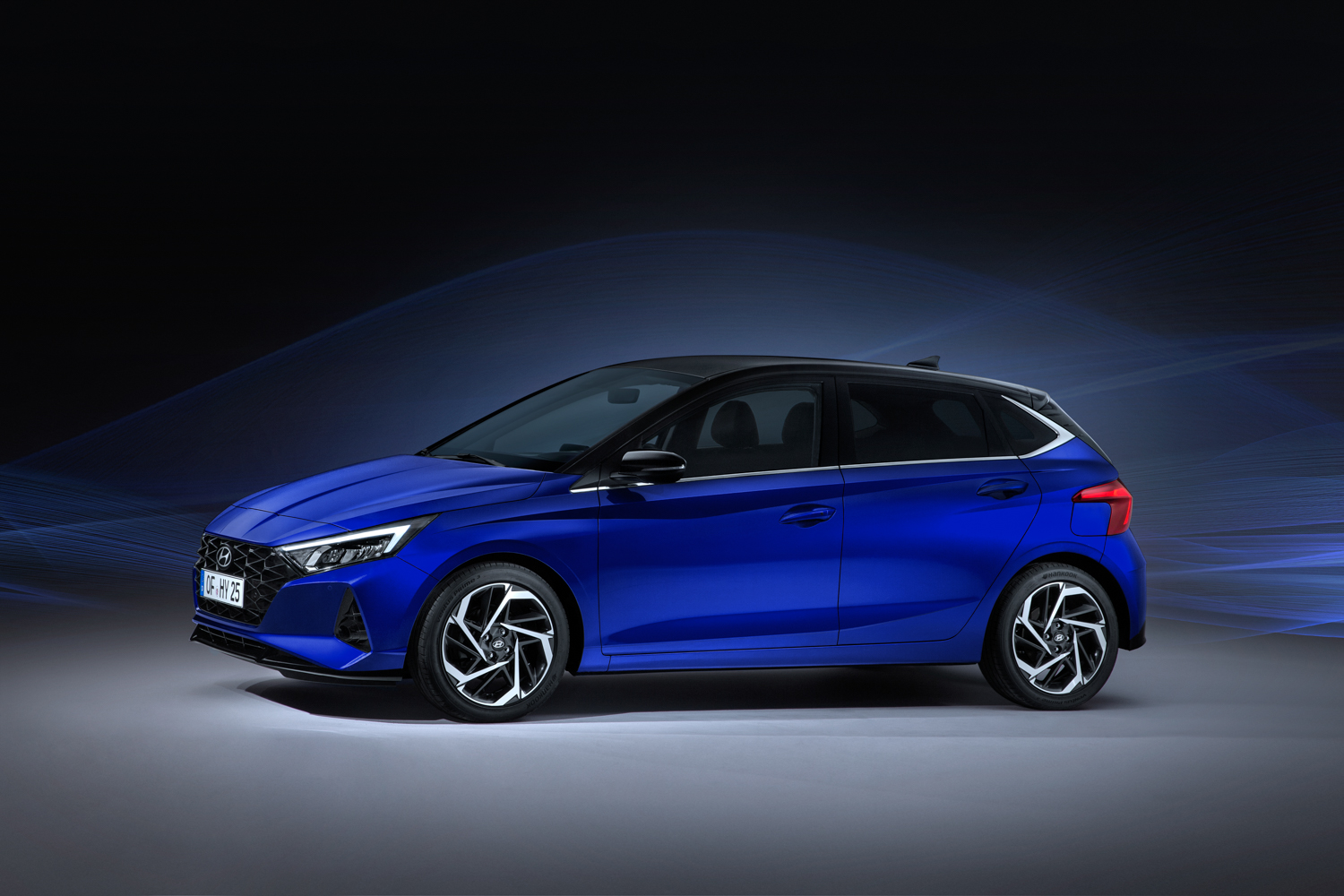 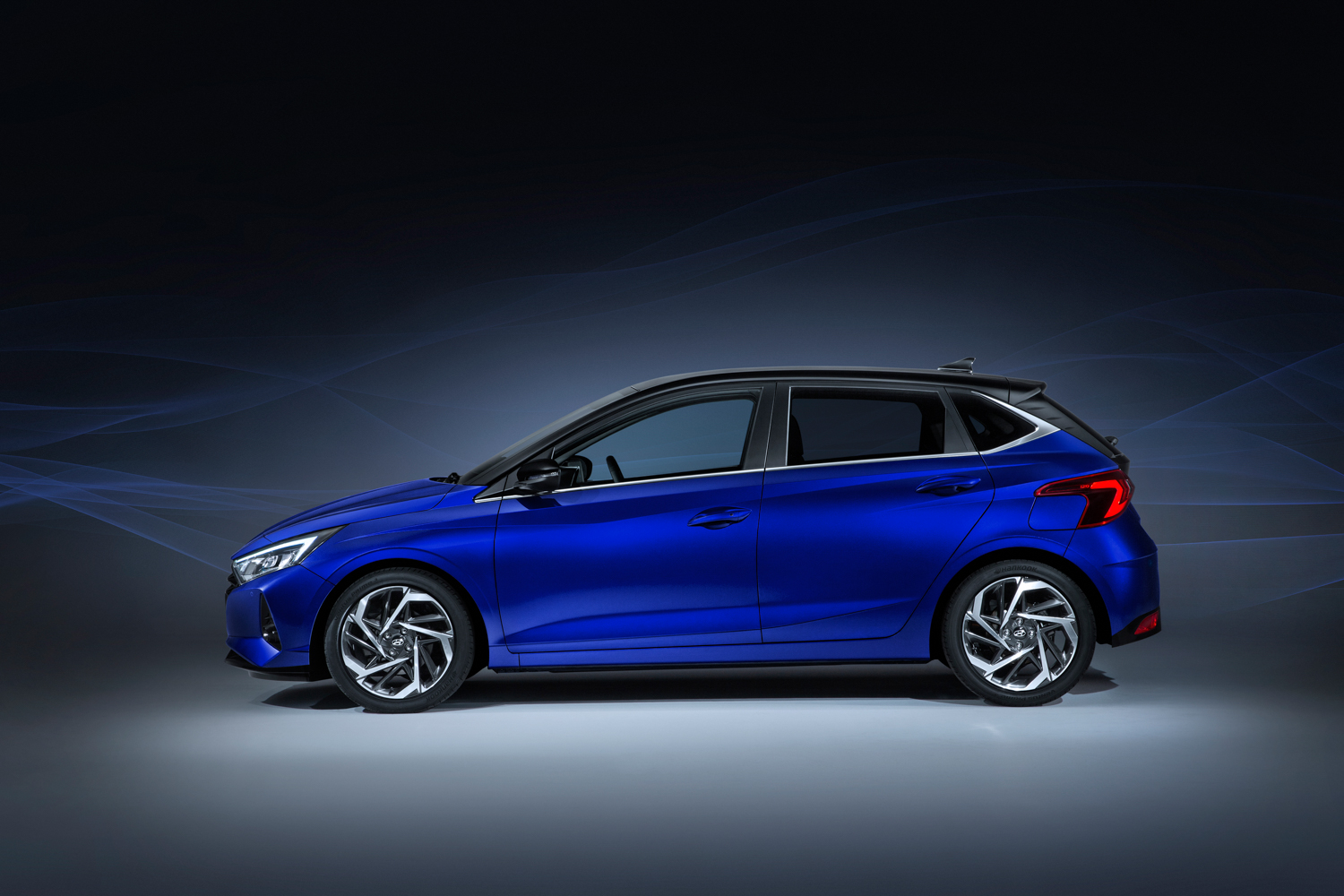 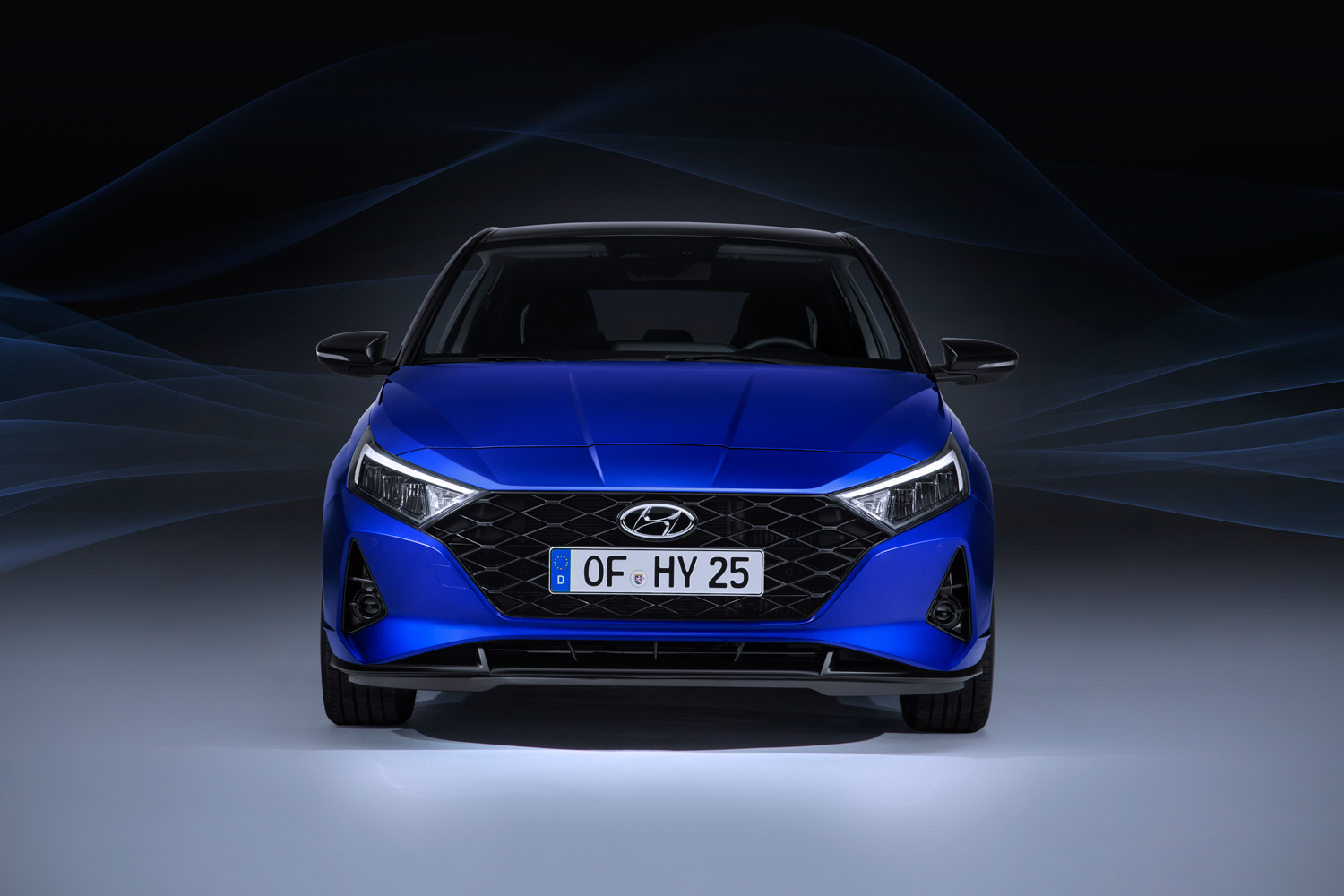 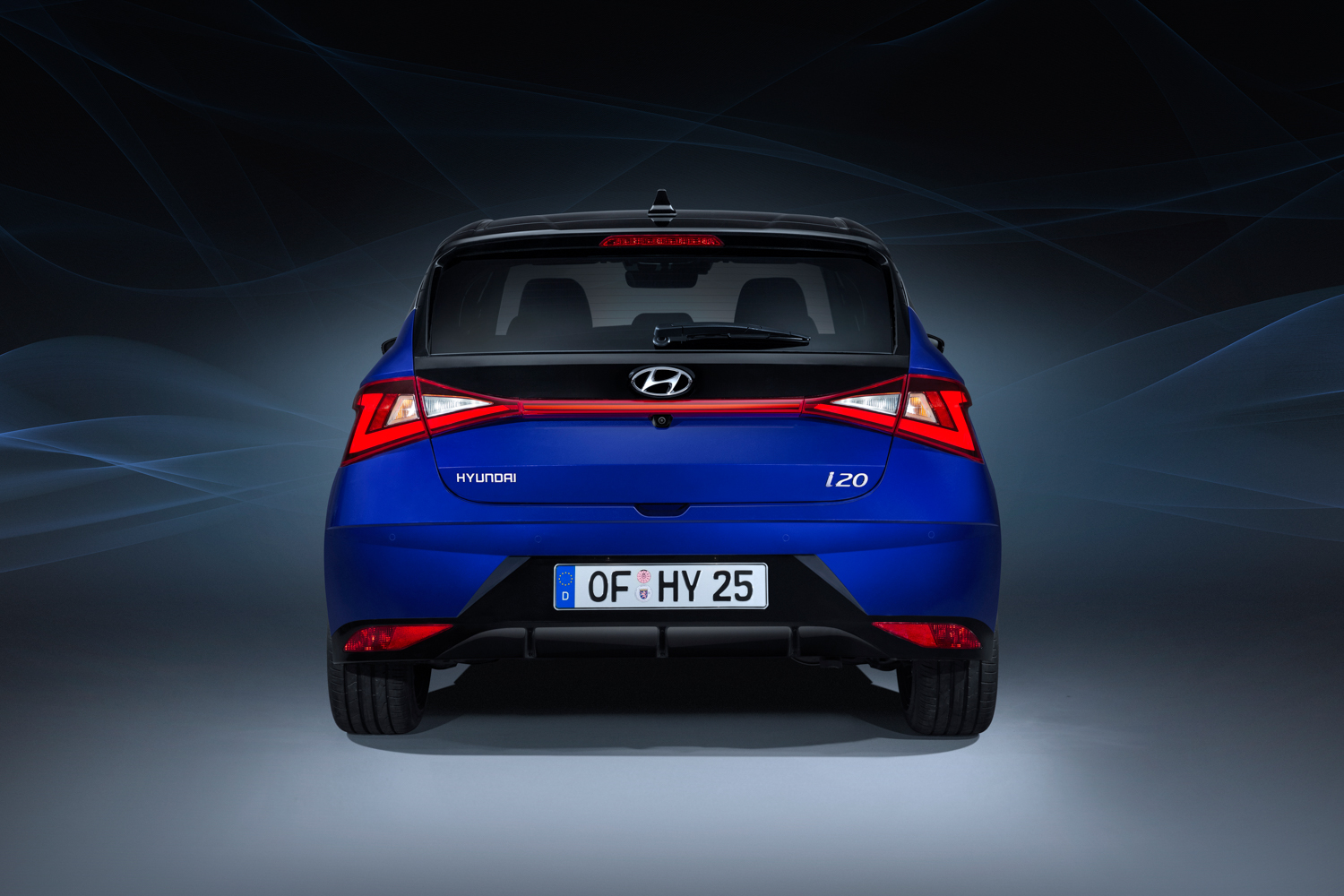 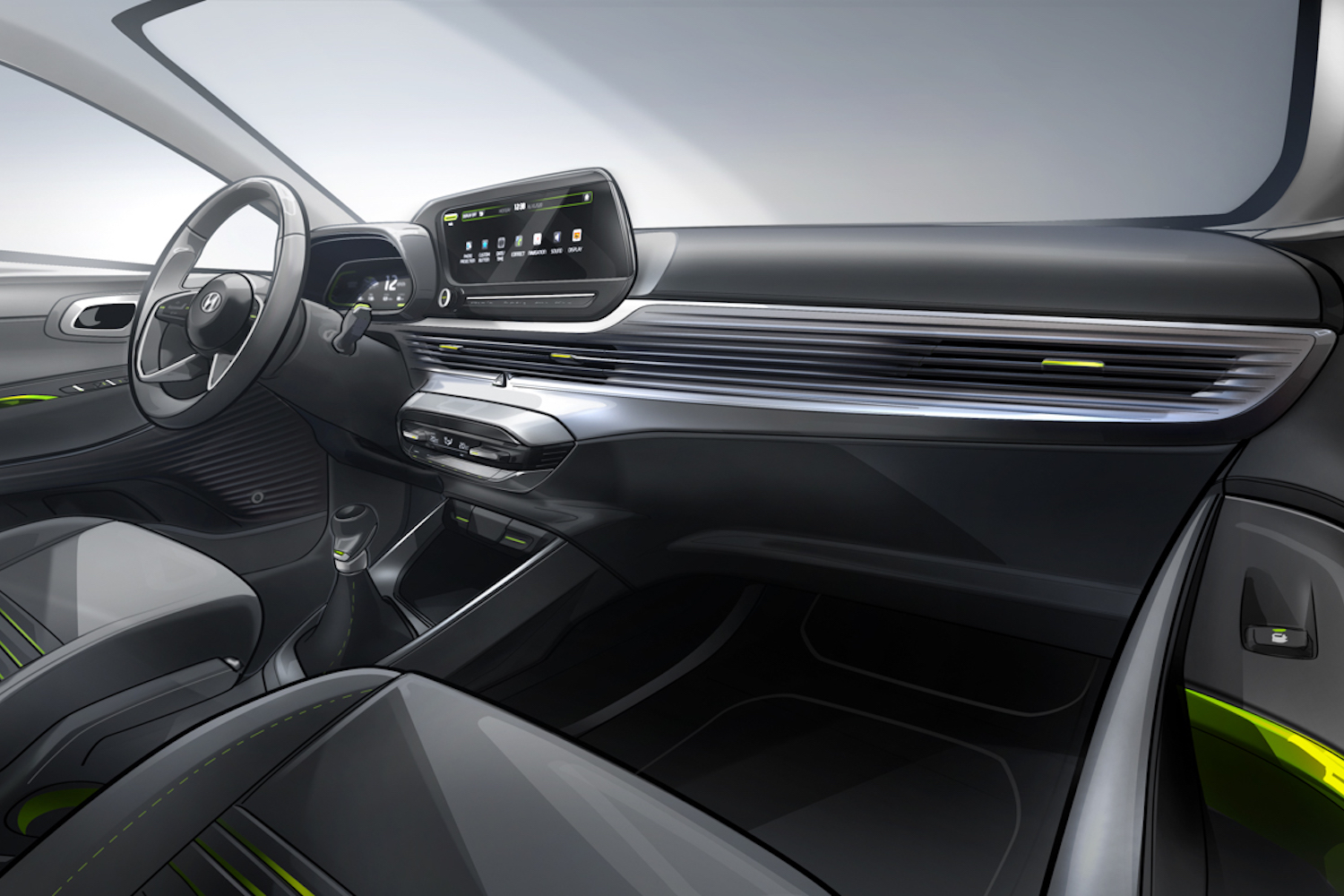 Hyundai has shown off its new i20 supermini for the first time, ahead of its official public reveal at the Geneva Motor Show. I think it's fair to say we weren't quite expecting this...

I mean, we knew that there was a new i20 coming, but the departure on the styling front is quite dramatic. From the almost apologetically-quiet looking current i20 to this new one is quite the leap. Hyundai calls this new design language 'Sensuous Sportiness' and it's going to spread to the rest of the range (having made its debut on the new i10).

The design takes a relatively simple two-box shape (with strong overtones of SEAT's Ibiza in the side profile) and adds dramatic side slashes, a gaping grille and angry looking headlights, and wraparound tail lights with a neatly integrated fuel filler flap. It sits some 24mm lower than the current i20 (which was hardly a tall-looking car), is 5mm longer, 30mm wider, and has a wheelbase that's 10mm longer.

There's a choice of ten exterior colours, including four new colours - Intense Blue, Aurora Gray, Aqua Turquoise, and Brass; and you can have a contrast black roof, too.

On the inside, Hyundai has gone seriously minimal, with a broad, low-set fascia decorated with horizontal 'blades', topped by an optional 10.25-inch central touchscreen (an eight-inch version is standard), which itself is leaning up against a 10.25-inch digital instrument screen.

There's a wireless charging pad for your phone, an optional Bose stereo, and Hyundai says that this is the most connected car it's ever made, with such services on offer through its Hyundai Live app as real-time traffic information powered by TomTom, fuel station prices and parking space availability (and prices), speed cameras locations (where legal), and weather updates. There's also a natural-language voice recognition system, plus a smartphone app that allows you to locate your car in a busy car park, remotely lock and unlock the doors, send navigation instructions from phone to car, send and receive servicing info, and get alarm notifications.

Needless to say there's Android Auto and Apple CarPlay too, but on a more practical front, the i20 gets more space in the back seat than the outgoing model (which was hardly shy of room) and a larger, 351-litre, boot.

Hyundai is also ladling on the safety spec, with such equipment as an intelligent speed limiter, lane-keeping steering, blind-spot warning with braking, forward collision alert, rear-crossing traffic alert, and automated braking in reverse. Oh, and driver attention monitor, and a high-beam assistant, and automated parking too. Phew.

On the engine front, the i20 will get Hyundai's 1.0-litre T-GDI turbo petrol three-cylinder engine, which is generally familiar to us, but which now gets a 48-volt mild-hybrid system. That can help save between three-to-four per cent on the i20's emissions and fuel consumption. But there's a catch...

The mild-hybrid setup only comes as standard on the 120hp version of the 1.0 engine, and is an option on the 1.0-litre version. The catch? Well, in the UK, Hyundai will only be taking the basic 100hp version, with the mild-hybrid fitted as standard. Irish specs won't be set for a while yet, so we'll just have to wait and see. The 120hp model also gets a clever new six-speed manual gearbox which automatically de-clutches when you lift off the throttle. That helps to save another few per cents of fuel, but, y'know, bye-bye engine braking. The 100hp version gets a normal six-speed manual, and both engines can be had with Hyundai's seven-speed DCT dual-clutch automatic.

There's also a basic entry-level engine (and again, we're not sure yet whether this will feature in the Irish lineup) which is the existing 84hp 1.2-litre MPi petrol four-cylinder. Even that should be a little more economical, though, as Hyundai says that this i20 is some four per cent lighter than the old one.