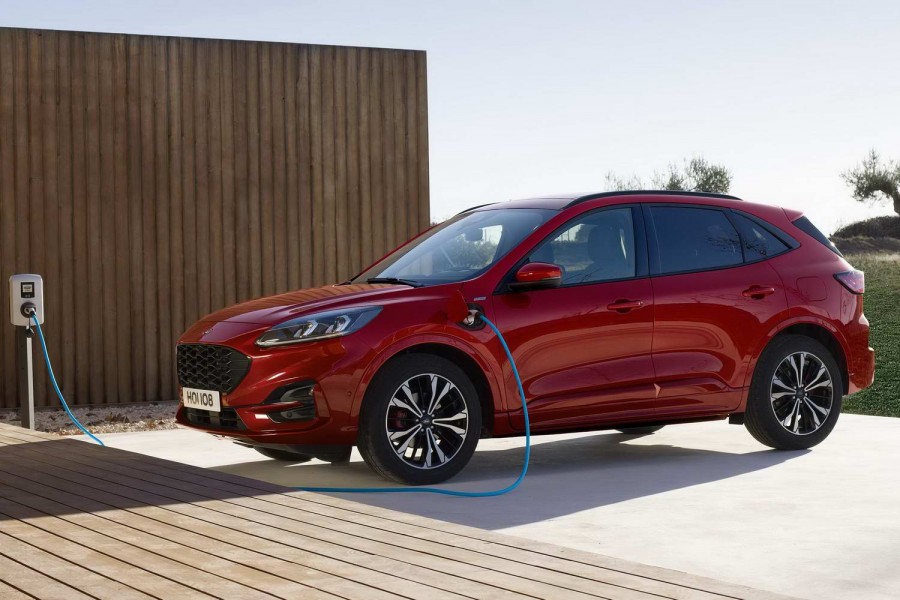 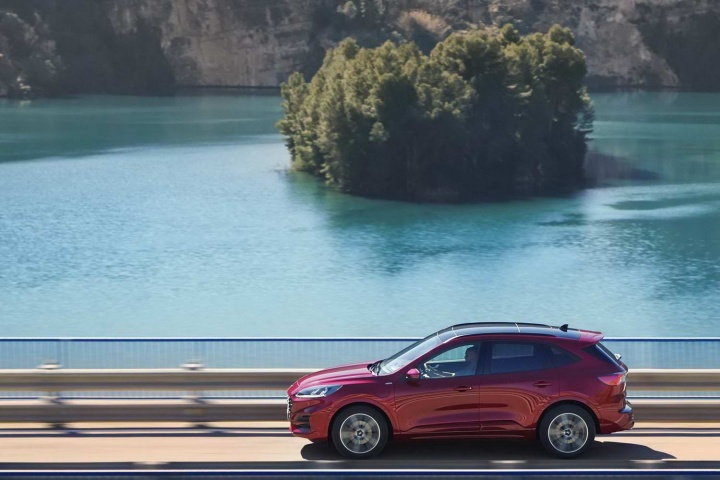 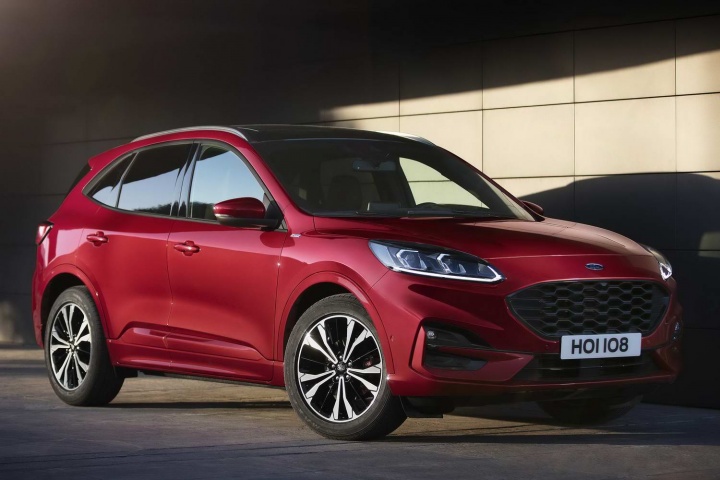 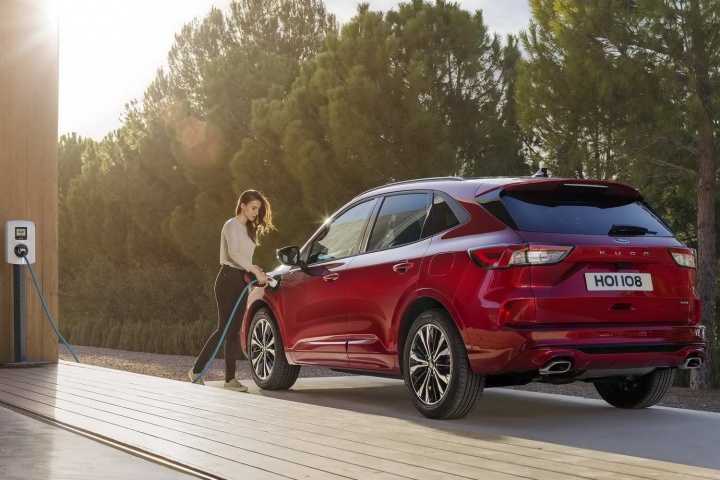 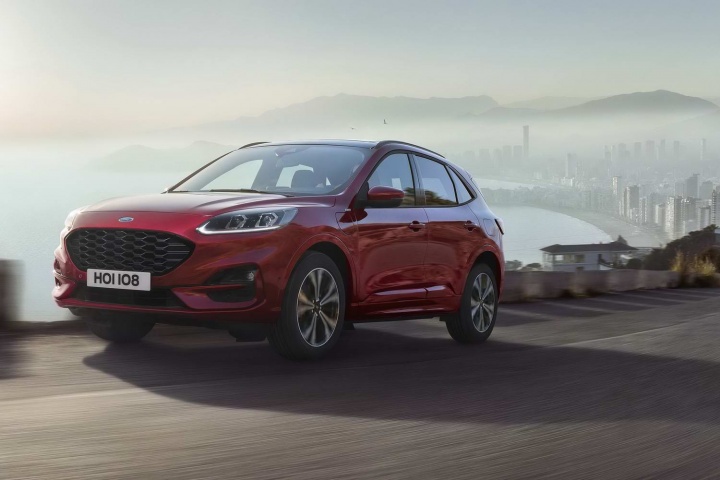 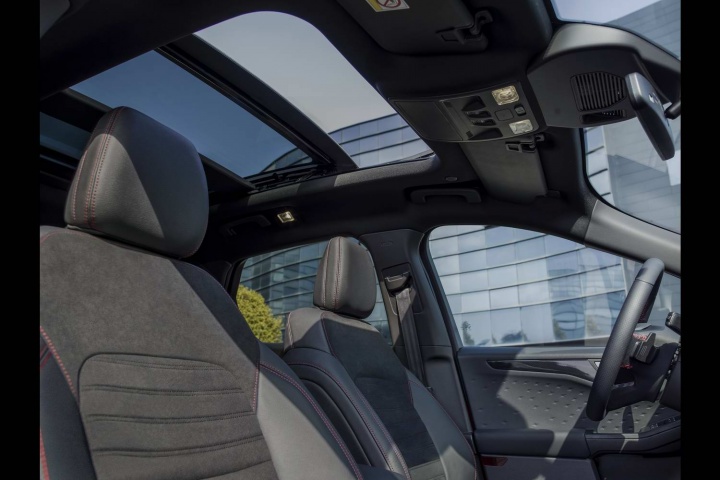 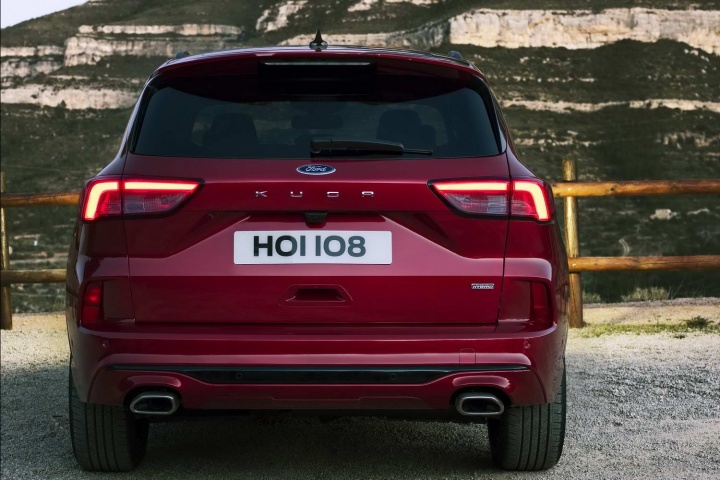 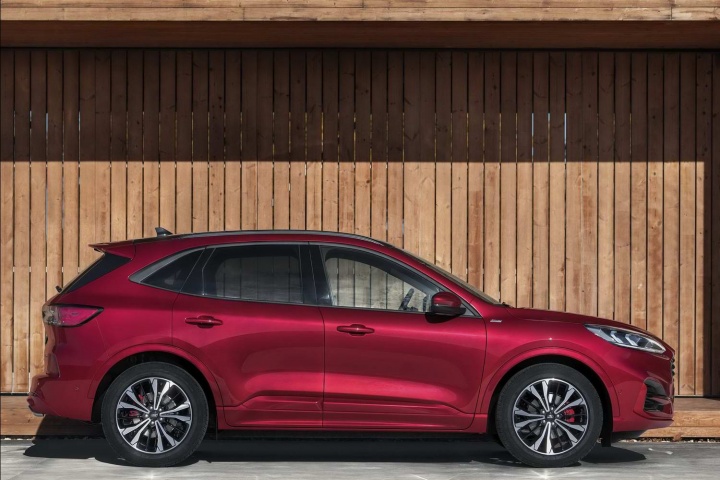 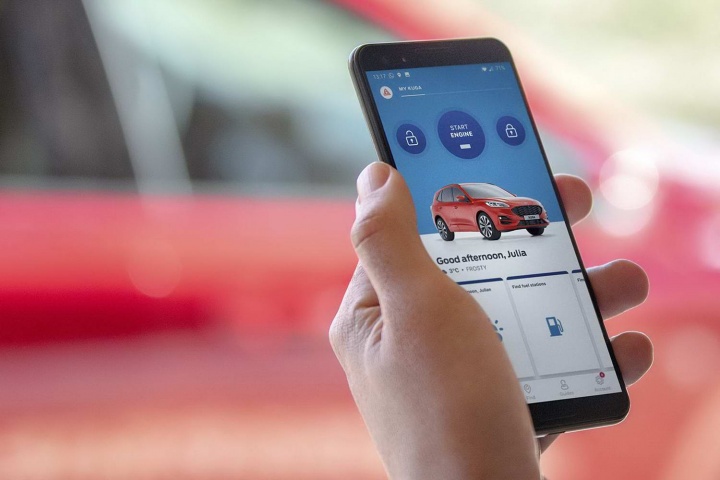 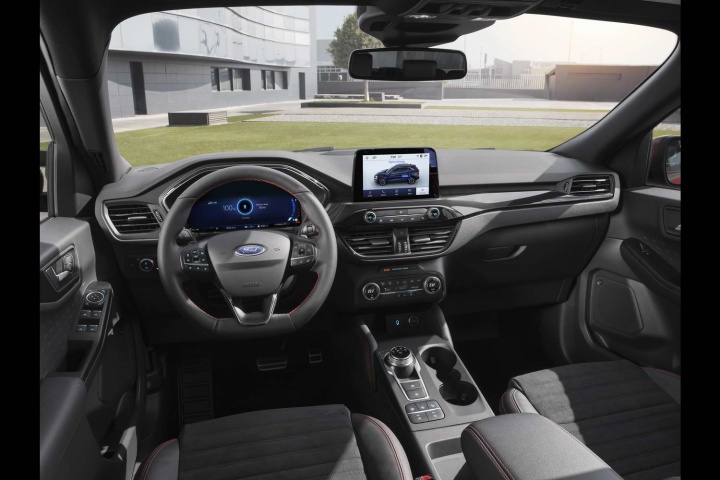 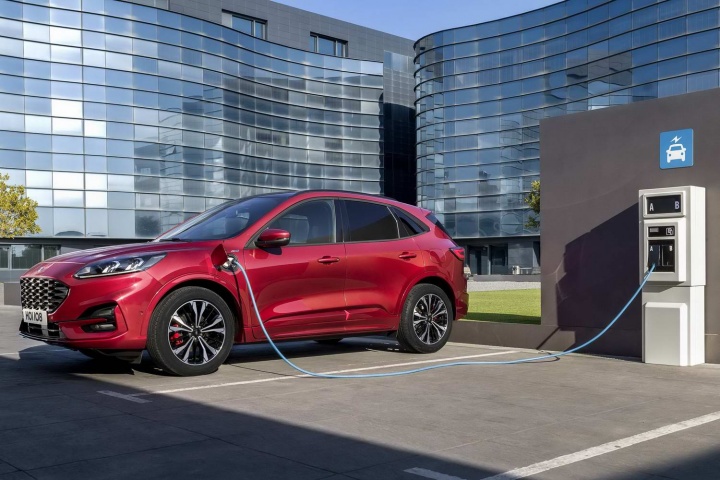 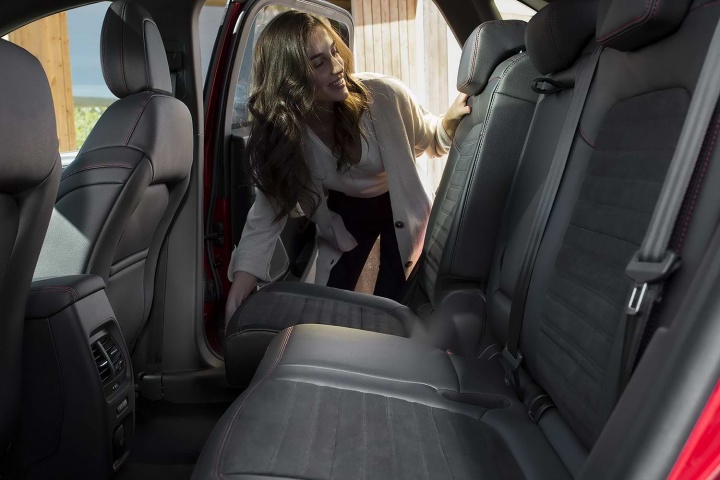 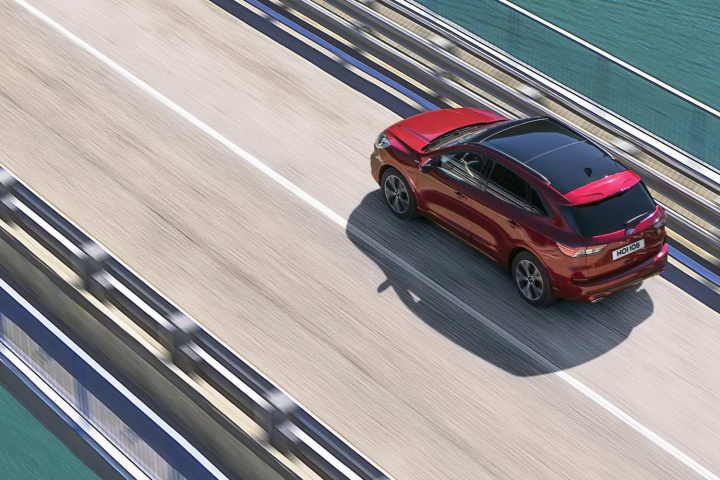 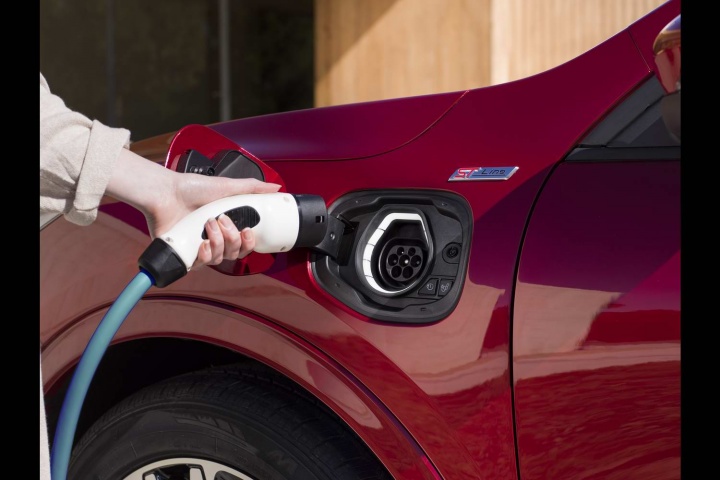 This is the all-new, third-generation Ford Kuga midsized SUV, which replaces the car that has been on sale since 2012. The big news is that the Kuga Mk3 will come with not one, not two but three hybrid powertrain options, alongside petrol and diesel alternatives.

The new Kuga is the first SUV to be based on Ford's latest global 'C2' architecture, that has a number of positive features going for it - such as ten per cent more torsional stiffness, improved aerodynamics for better fuel efficiency, less weight (the Mk3 will be up to 90kg lighter than its equivalent models in Mk2 guise) and more space inside. The latter is because the third-gen Kuga is 44mm wider and 89mm longer than the outgoing SUV, with a wheelbase stretched by 20mm as well. Visually, it's obvious to see from where the Kuga draws its influences - the front end of the vehicle is redolent of the Fiesta and Focus cars, while the rear looks a lot like the bigger Edge SUV.

Ford says it will offer the Kuga in upmarket Vignale, sporty ST-Line and entry-level Titanium variants, with a high standard specification offered on even the Titanium. All cars will therefore feature a front skid-plate and rear diffuser, body-coloured mirrors, side cladding and door handles, LED daytime running lights and alloy wheels of at least 17 inches in diameter - with 20-inch items on the options list for the Vignale. A total of 12 colours will be available for the Kuga, including new metallic shades such as Diffused Silver and Sedona Orange, while the Vignale will also be available in the exclusive finish of Blue Panther.

Bigger on the outside means bigger on the inside, too, so Ford is claiming the latest Kuga offers extra lounging space for passengers within. There's said to be 43mm more shoulder-room and 57mm more hip-room in the front seats, but the second-row occupants aren't left out, as they'll enjoy 20mm more shoulder-room and 36mm more hip-room, too. The Kuga is actually lower than its predecessor, by 20mm, but headroom increases within by 13- and 35mm, front and rear respectively. Those back chairs can slide aft, to increase rear legroom to a 'best-in-class' 124mm, or forwards to jack up the cargo bay by 67 litres. No word yet on the actual boot space figures, but we'd expect an increase from the old car's data of 456 litres.

The technology levels are boosted, too. The outer seats of row two in the Kuga can be heated for the first time, while FordPass Connect turns the vehicle into a mobile WiFi hotspot for up to ten devices. There will be a wireless charging pad for smartphones, this being located beneath the instrument panel, while Ford's SYNC 3 infotainment will be presented on an eight-inch central touchscreen; this will support Apple CarPlay and Android Auto, as standard. A 12.3-inch TFT instrument cluster is promised, although this is likely to be an option, as is a ten-speaker, 575-watt B&O Sound System. Out the back will be the hands-free tailgate, allowing for a 'kicking' motion under the rear bumper to open the boot, while Active Noise Control will broadcast sound-cancelling waves through the audio system to enhance interior refinement. Beyond this sort of stuff, there's a simply vast array of driver-assist technology features, including (but not limited to) Adaptive Cruise Control with Stop&Go, a Head-Up Display, BLIS (blind-spot monitoring) with Cross-Traffic Alert, Active Park Assist 2, Evasive Steering Assist, Lane-Keeping Aid, Wrong-Way Alert, Adaptive Front Lighting System, Post-Collision Braking and front/rear wide-view cameras.

There will be plug-in hybrid (PHEV), mild-hybrid (MHEV) and full-hybrid (HEV) powertrains for the SUV, so let's deal with them in order. The PHEV will be officially known as the Kuga Plug-In Hybrid and will team a 2.5-litre, four-cylinder, Atkinson-cycle petrol engine to an electric motor and generator, and a 10.3kWh lithium-ion battery for a maximum system output of 225hp. Ford's first European PHEV will be capable of more than 50km on electric power alone, while the company is targeting eco-stats as impressive as 1.2 litres/100km (235.4mpg) and 29g/km of CO2 emissions. Charging the vehicle back up will involve a port mounted on the Kuga PHEV's front wing, with a charging time of four hours from a 230-volt supply.

The Kuga EcoBlue Hybrid is the MHEV, as it uses a 150hp, 2.0-litre EcoBlue turbodiesel augmented by a 48-volt lithium-ion-powered electrical system, incorporating a belt-driven integrated starter/generator (BISG) to replace the alternator and the starting motor. Thus equipped, Ford reckons the Kuga MHEV will be capable of 5.0 litres/100km (56.5mpg) and 132g/km of CO2. The Kuga Hybrid (this is the HEV) uses the 2.5-litre Atkinson-cycle petrol engine again, along with an electric motor, generator, lithium-ion battery and a power-split automatic transmission, which can send power to the front or both axles. Due later in 2020, the Kuga Hybrid will use 5.6 litres/100km (50.4mpg) with 130g/km of CO2 emissions.

If you're not convinced by the electric future, then Ford will offer both turbocharged EcoBoost and EcoBlue petrol and diesel engines in the Kuga, all of them conforming to Euro 6.2 emissions standards under WLTP regulations. Gearbox choices will be either a six-speed manual or an eight-speed automatic, although the latter will only be available on the diesels. Choose from the 1.5-litre, three-cylinder EcoBoost petrol engine, with either 120- or 150hp (best fuel consumption of 6.5 litres/100km, or 43.5mpg, with CO2 from 149g/km), and enjoy a three-cylinder engine that can deactivate one of its cylinders to run on just two pistons from time to time (like the current Fiesta ST). Or, alternatively, there's a pair of diesels. The 1.5-litre EcoBlue has 120hp, with 4.8 litres/100km (58.9mpg) and 127g/km, or there's the 2.0-litre EcoBlue with 180hp, and figures of 5.7 litres/100km (49.6mpg) with 150g/km. Alone of the normal combustion-powered cars, the 2.0-litre diesel comes with Ford's Intelligent All-Wheel Drive, but all Kugas will have selectable Drive Modes for the first time.

The new Ford Kuga, due to go on sale before 2019 is out, will aim to build on its predecessor's strong sales performance - it was already driving Ford to 275,100 SUV sales in Europe in 2018 (growth of 19 per cent), along with the EcoSport.