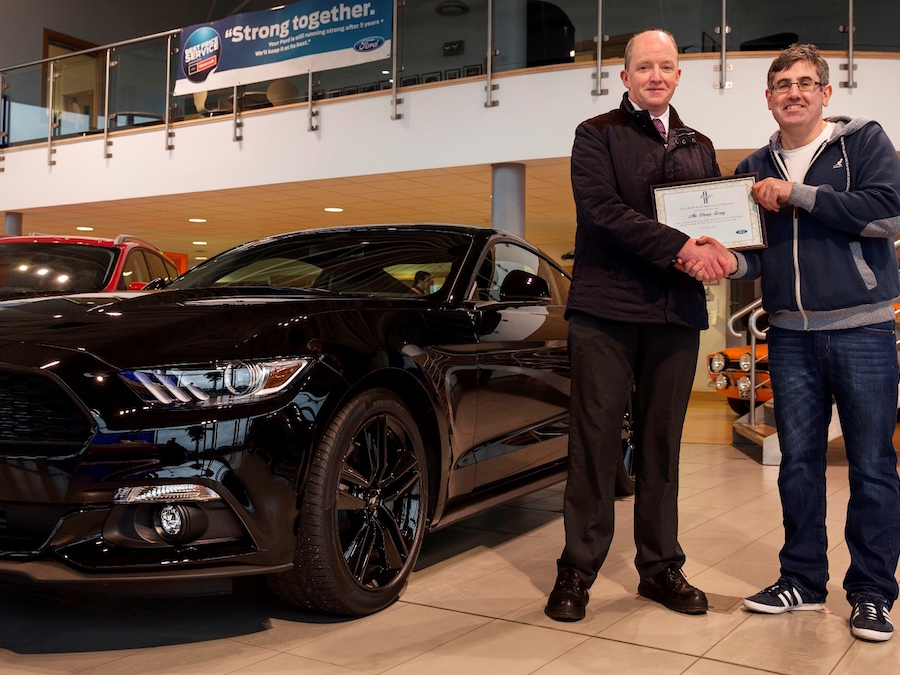 Everyone, get ready to be jealous of Denis Ferry.

We know that the first registered and delivered right-hand-drive Irish Ford Mustang already has at least 1,000km on it. How so? Because Denis Ferry, the lucky man from Donegal who has bought the first ever Mustang to be delivered to Ireland with the steering wheel on the correct side told us, via Twitter, that he just took the car straight out and started driving...

It's a black, 2.3-litre EcoBoost coupe, with 317hp and Denis is one delighted owner. "I can't describe the feeling of getting behind the wheel of my very own Ford Mustang", said Denis upon collecting his new ride. "I have always loved the look of Mustang cars and this latest version is one of the most beautiful ever. When I heard Mustang was coming to Ireland, I didn't hesitate, I just had to have one - I am delighted to be the first Mustang customer in Ireland."

Denis has long been a fan of Mustang and Ford performance cars in general so upon hearing about the plans for the launch of Mustang in Europe back in 2013, on the same day, he went along to his local Ford Dealer, Hegarty's in Letterkenny, and placed the first order for Mustang in Ireland and, indeed, Europe.

Andrew Hegarty, from Hegarty's Auto Services, said: "We wish Denis many years of happy and safe motoring in his new Mustang. With the help of Pat Hart from CAB Motors in Cork, we were delighted to supply Denis with the first Mustang in Ireland and we felt we had to mark this very important occasion so we gave Denis a framed certificate recognising him as the first Mustang customer in Ireland".