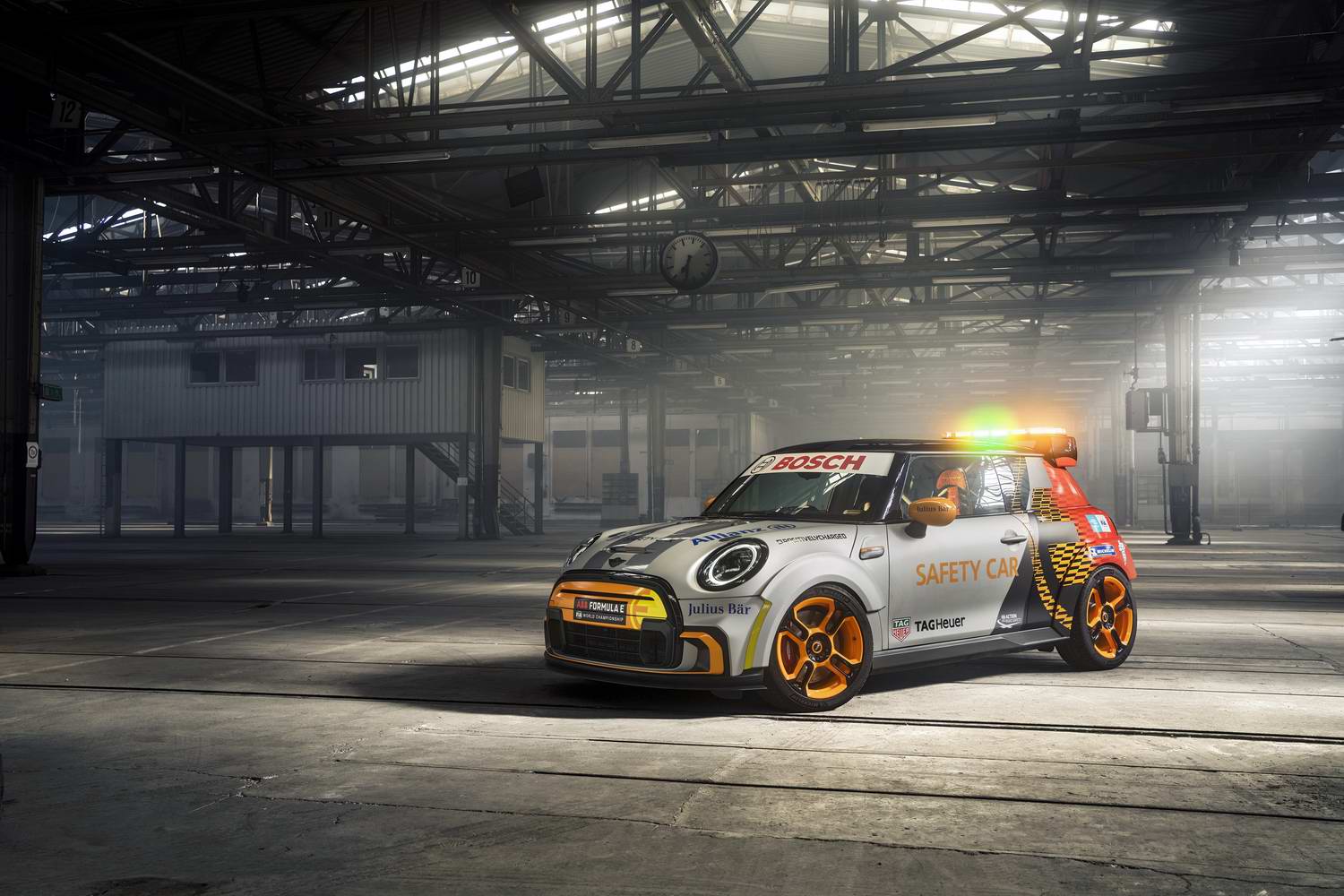 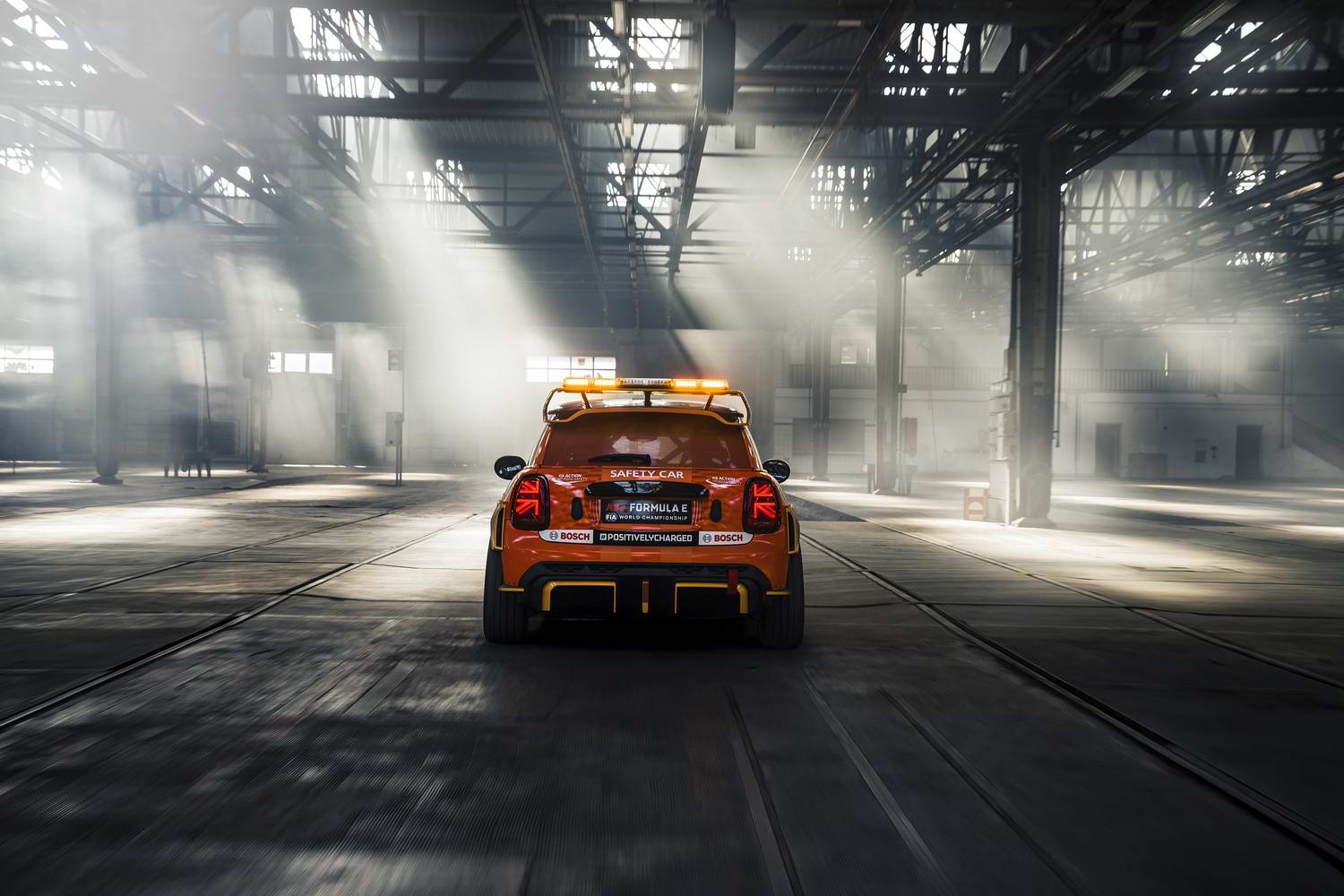 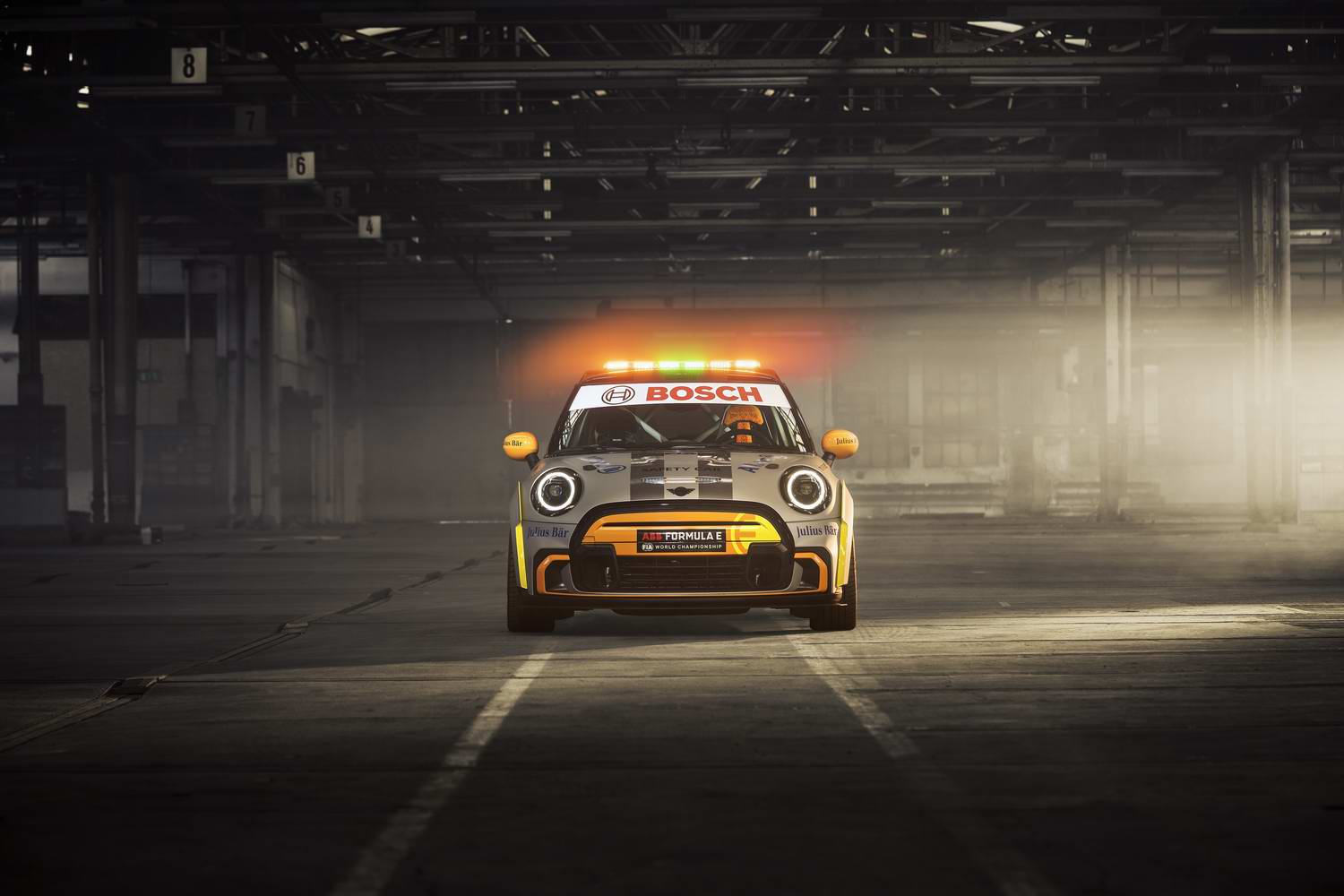 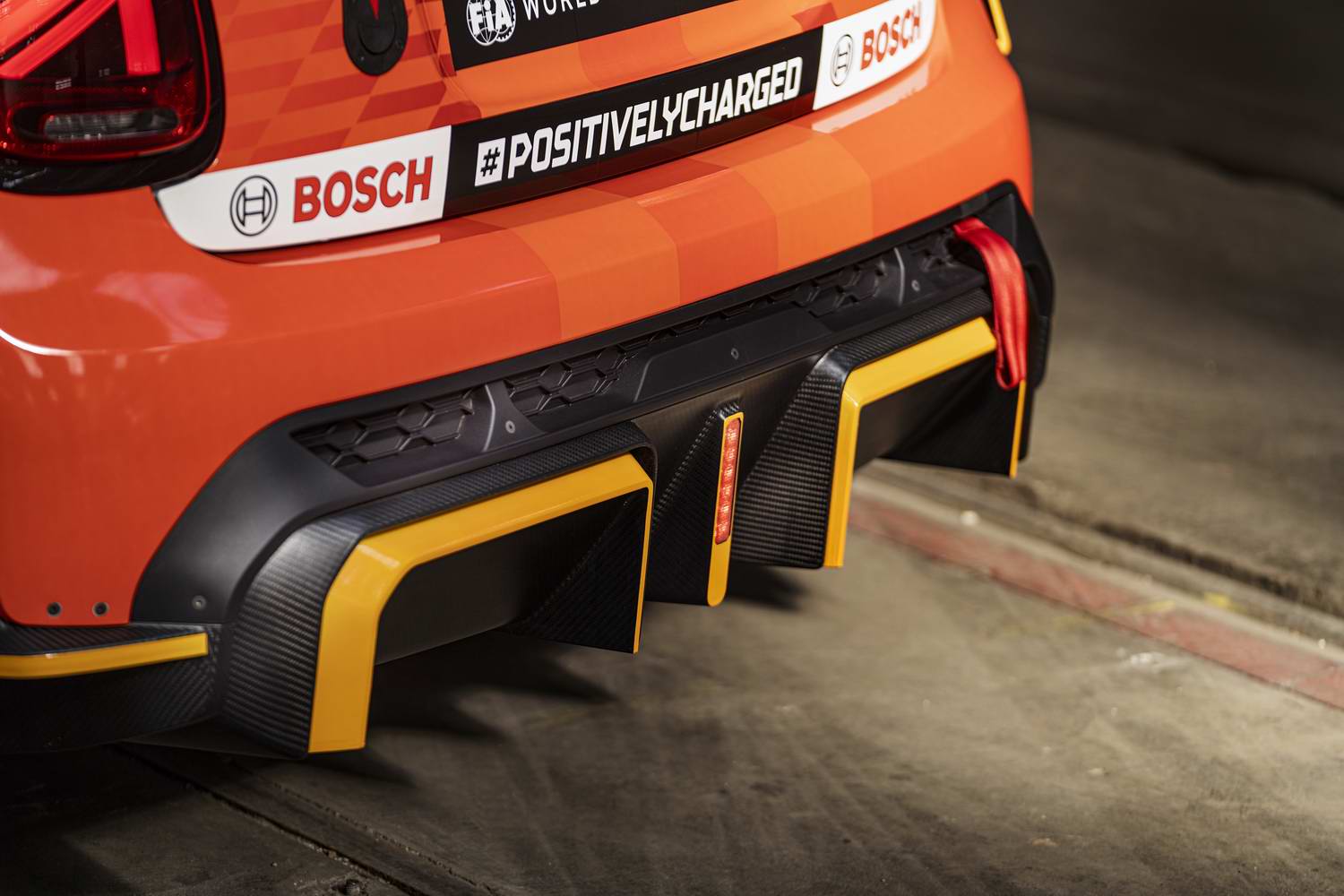 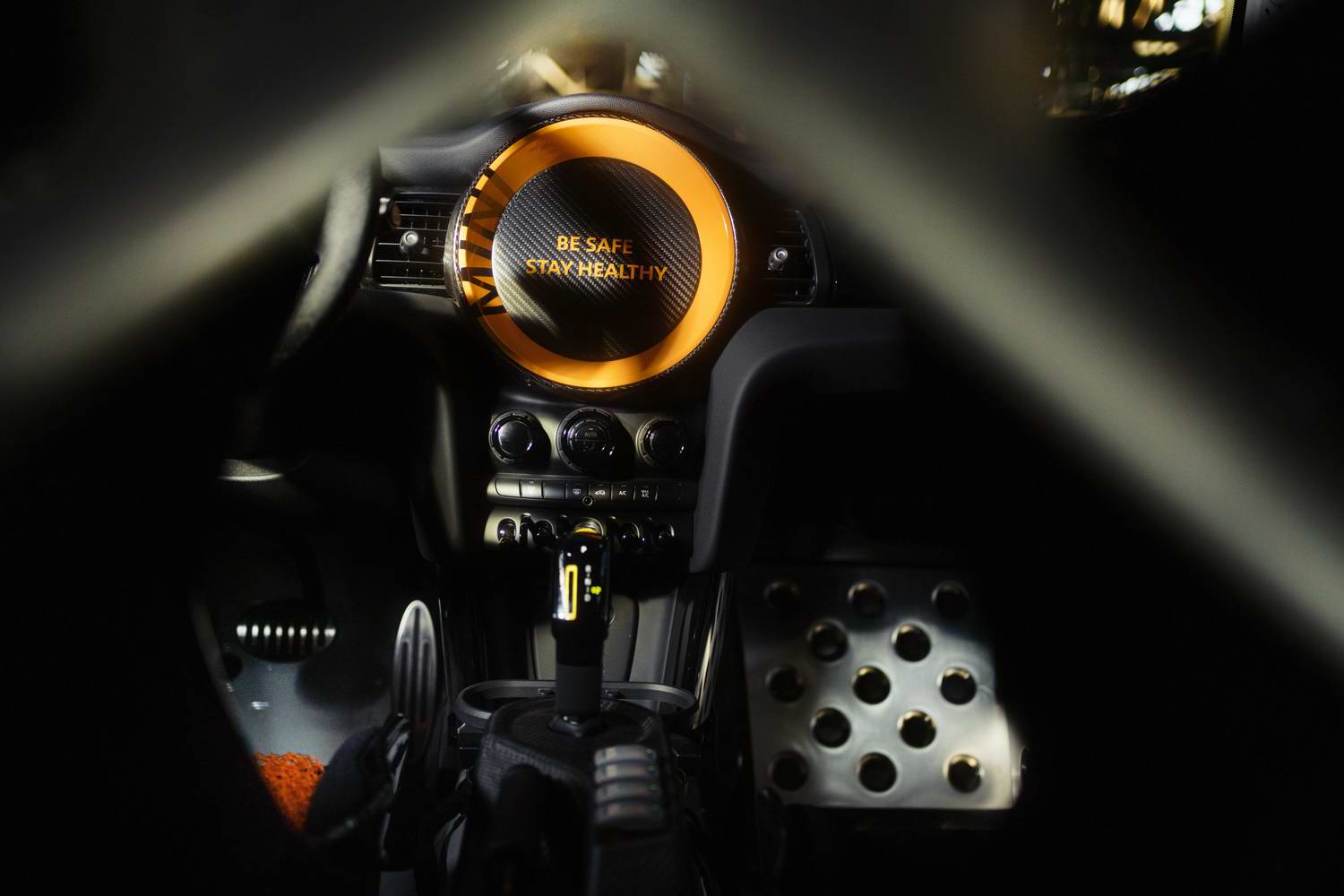 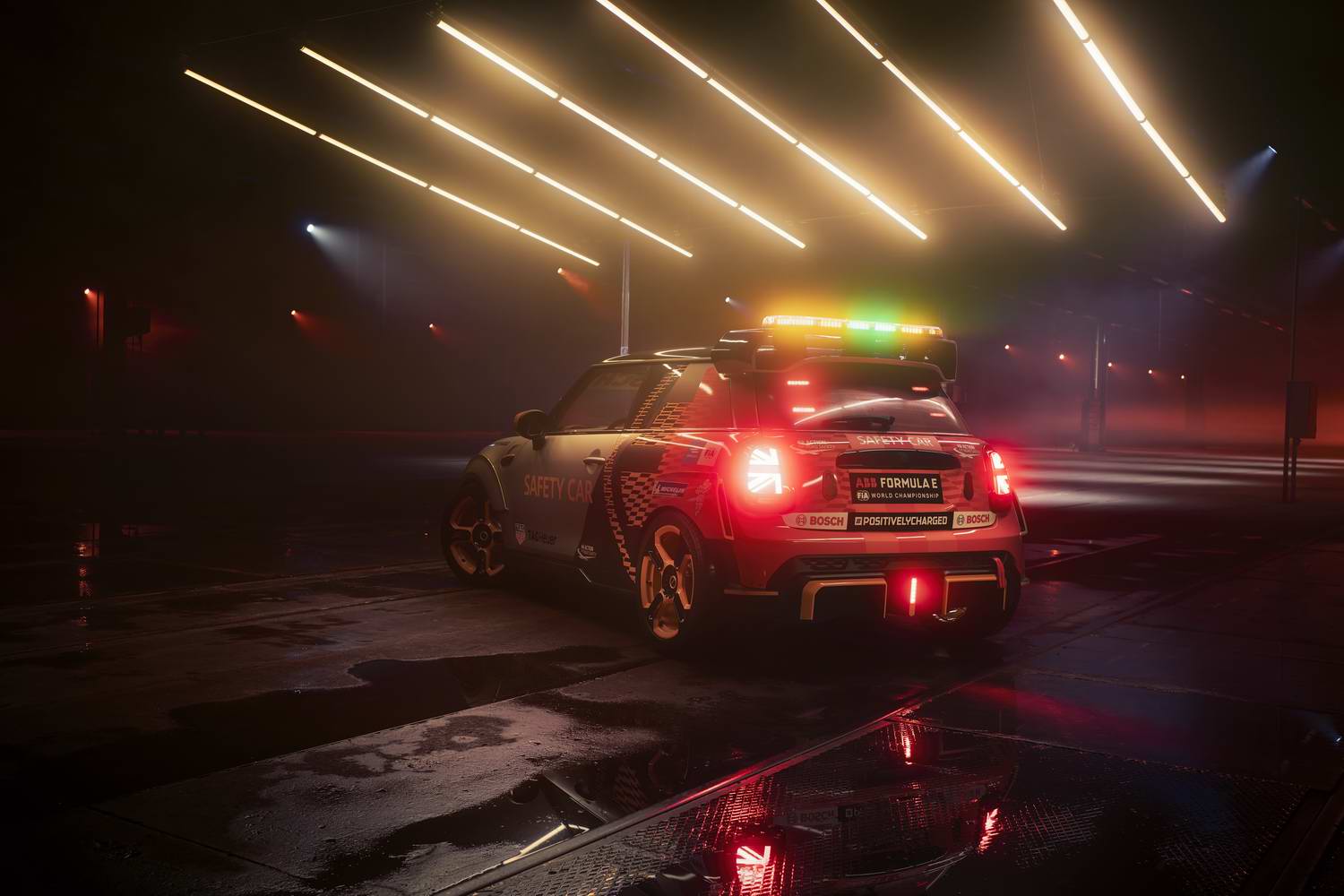 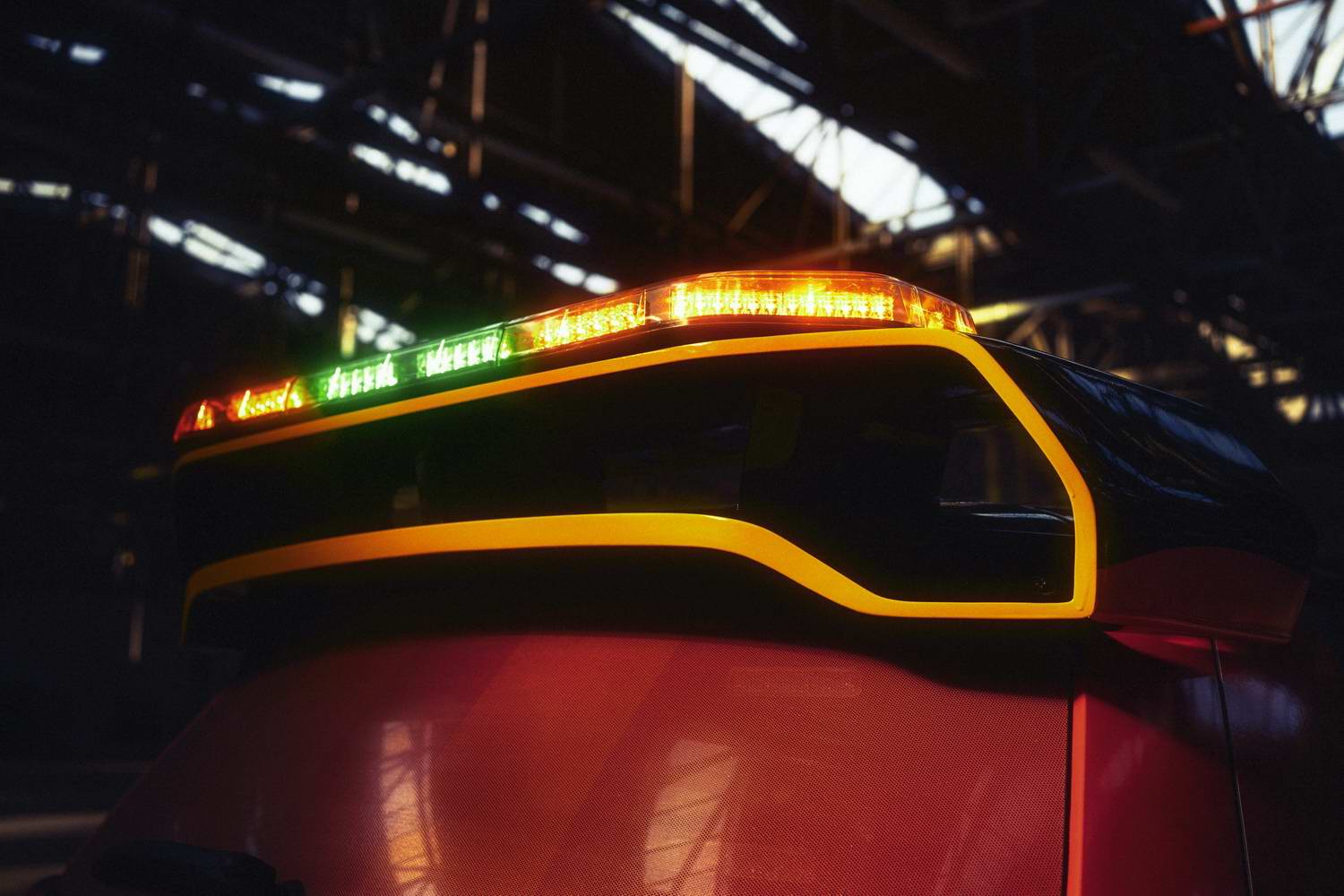 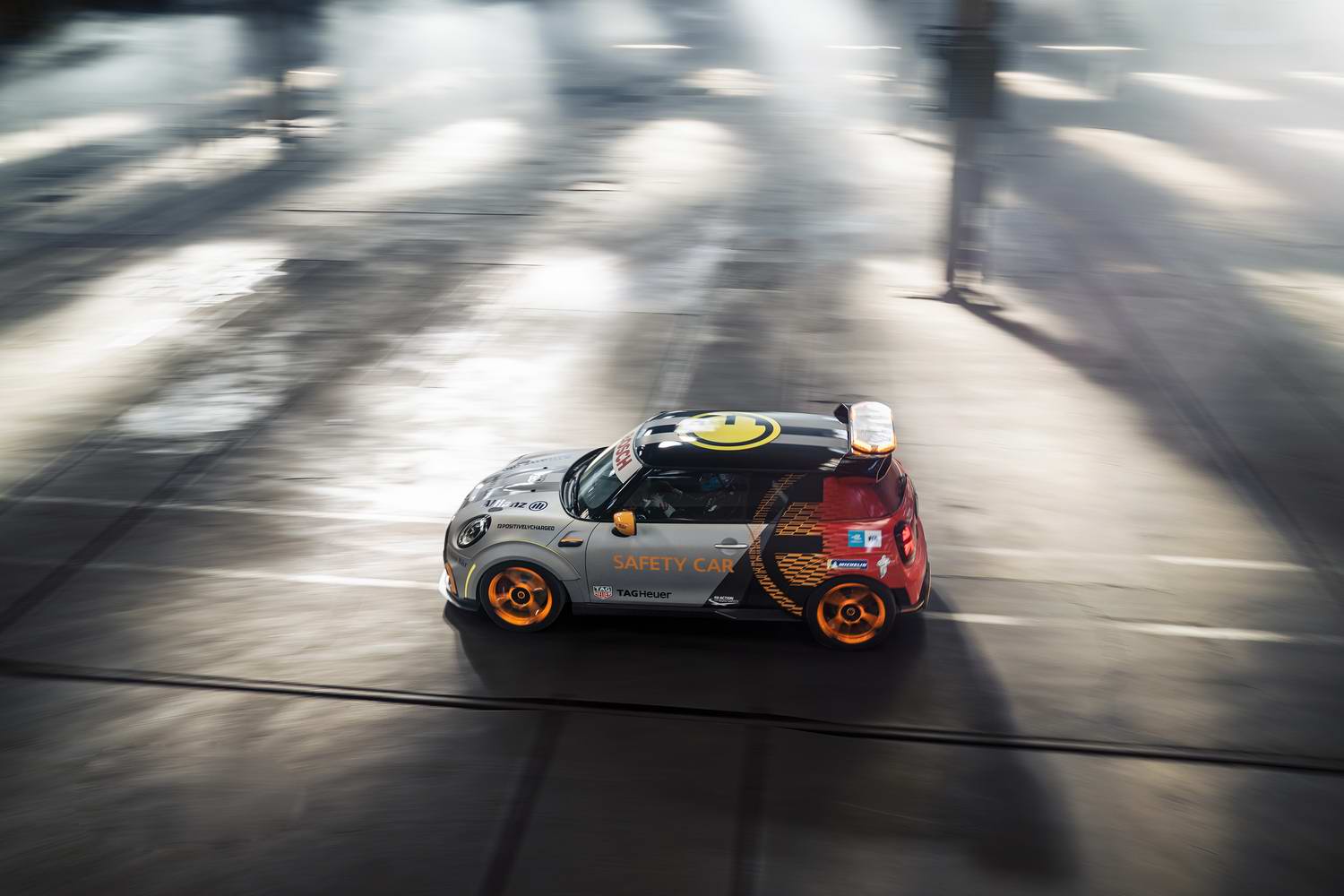 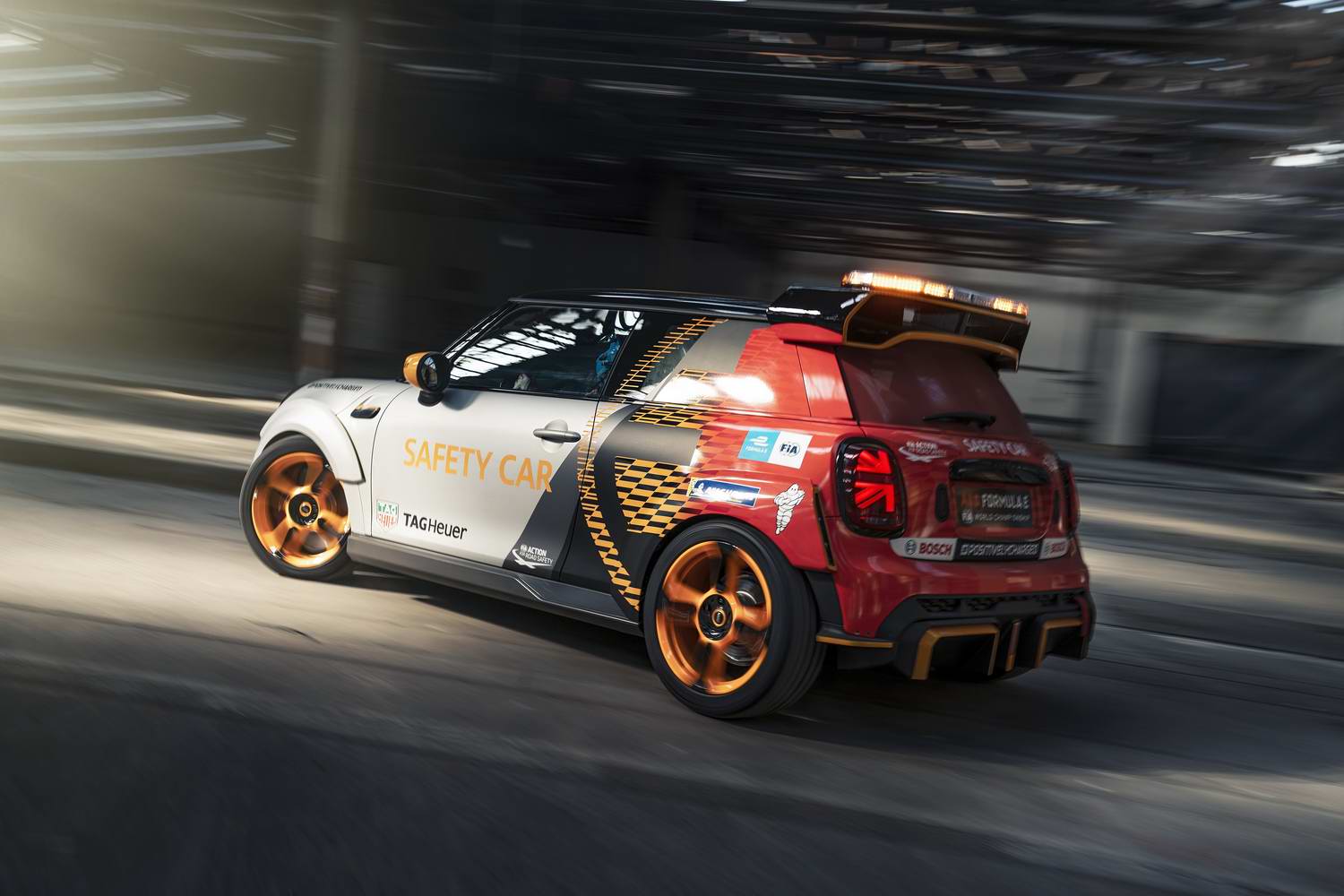 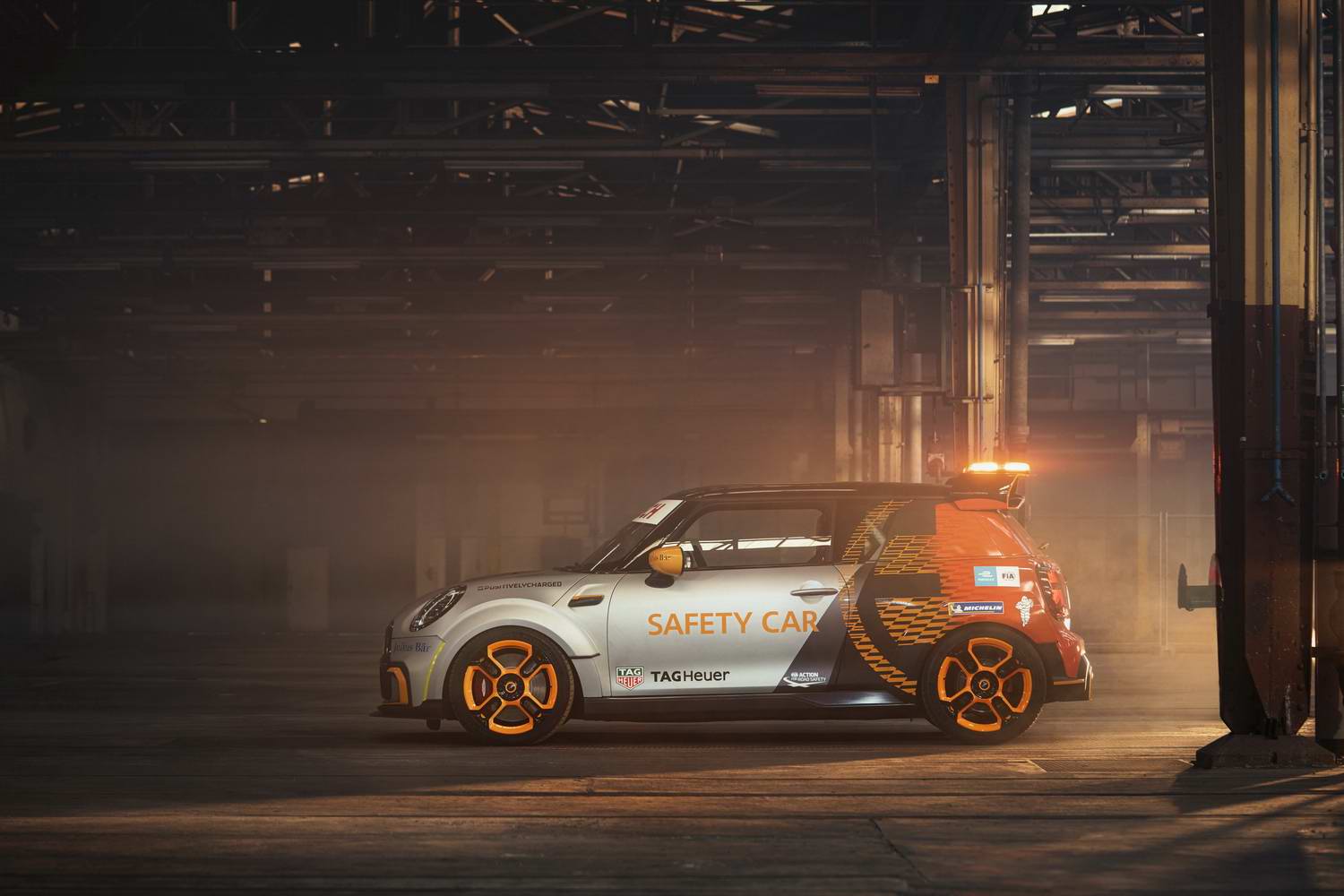 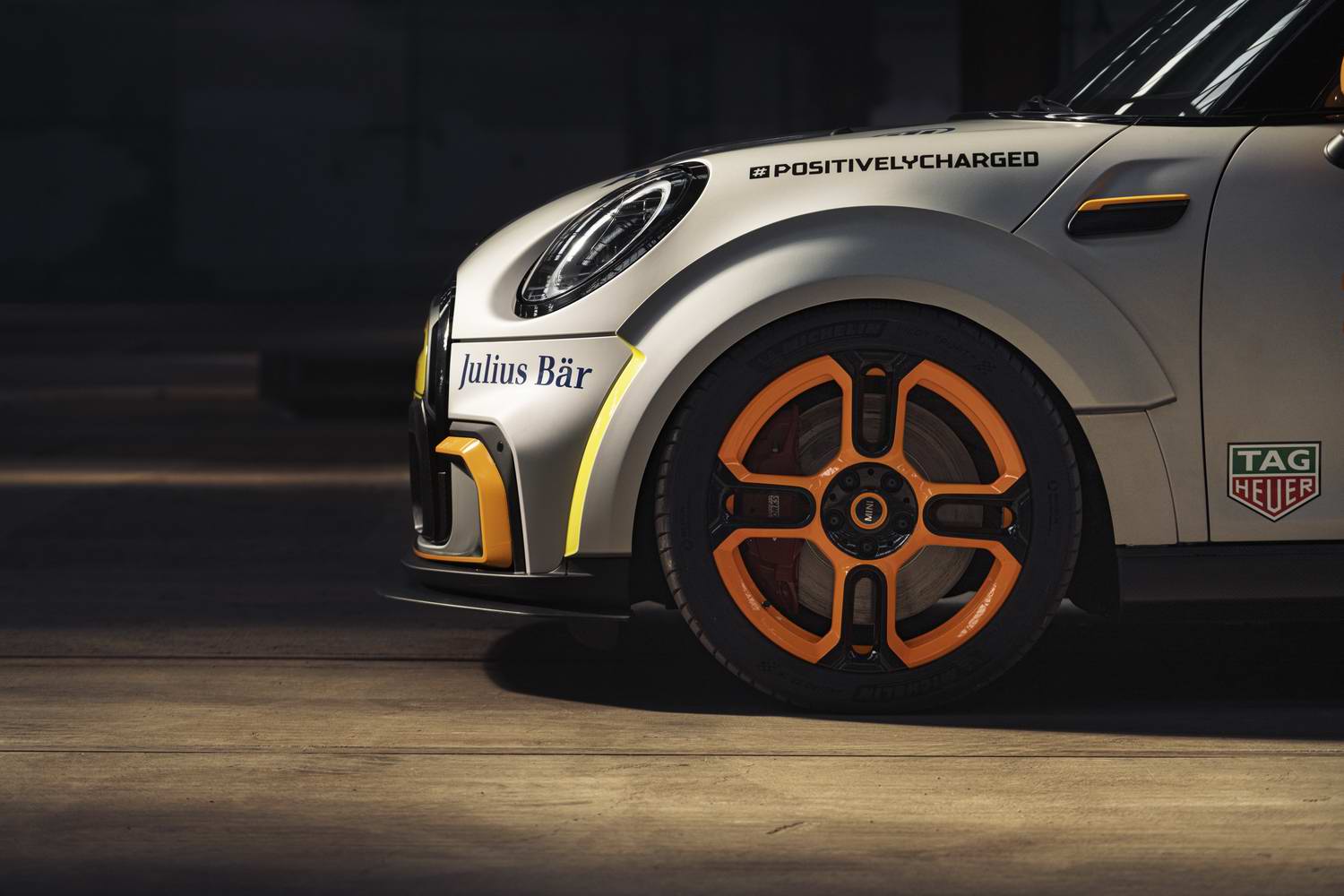 You're looking at the 'MINI Electric Pacesetter inspired by JCW', or in simple terms, the official new safety car for the 2021 ABB FIA Formula E World Championship. That's the single-seat race series powered by electricity run on street circuits around the globe. An electric safety car is apt. The BMW i8 hybrid previously served this role.

BMW Motorsport is credited with taking the stock MINI Electric and making it suitable for its new task. The electric motor's peak power of 184hp is unchanged, but its maximum torque output has increased by 10Nm to 280Nm. MINI quotes a 0-100km/h time of 6.7 seconds, some 0.6 seconds quicker than the standard car, with better mid-range acceleration, too. No doubt the 130kg weight reduction had something to do with this.

The MINI Electric's suspension has been given an overhaul, to cope with consistent fast lapping. It's now adjustable for rebound, compression, height and camber, and MINI alludes to the use of race-spec components. There's also a 10mm increase in track width.

A set of four-piston brakes can be seen behind the 18-inch alloys from the MINI John Cooper Works GP. The same tyres as used by the Formula E racers are employed on the safety car - Michelin Pilot Sport.

Beefy wheelarch extensions cover the wider track and complement the deeper front bumper, featuring an aerodynamic splitter and openings for brake cooling. Zoom in on the front shots and you'll spot neatly integrated flashing lights at the front of the bonnet, in the position often occupied by air intakes on fast MINIs.

The JCW GP's look is mimicked at the side of the Pacesetter, with carbon fibre (made from recycled material) side sills and a massive roof spoiler.

Look at that from the rear and the safety car lights are more obvious, as are the cut-outs in the backs of the flared rear wheelarch extensions. There's also a significant looking aerodynamic diffuser, which, obviously, doesn't have to accommodate any exhaust pipes.

The cabin of the safety car is stripped out and has the appearance of a racer. Thanks in no small part to the welded-in roll cage. There are no rear seats, while the two front chairs are, unsurprisingly, certified racing seats with six-point harnesses.

MINI has replaced much of the comfort trim with simple carbon fibre, while some items are 3D-printed, including removable pads on the seats to adapt to different drivers.

Late last year, MINI indicated that the JCW brand would be going down the electrification route soon, and this safety car is perhaps a closer look at how that might pan out.

"We have already shown how well driving fun and electric mobility go together with the MINI Electric," says Bernd Körber, Head of MINI. "However, the MINI Electric Pacesetter inspired by JCW goes at least a step further and blends the performance character of the John Cooper Works brand with electric mobility. This extreme version of the MINI Electric has been developed as the Safety Car in the Formula E, so is clearly not intended for use on public roads. But it does reveal one of the directions we could take with the electrification of the JCW brand. For me, the message is clear: electrification and John Cooper Works are a good fit."