Mercedes-Benz GLA is a five-star car 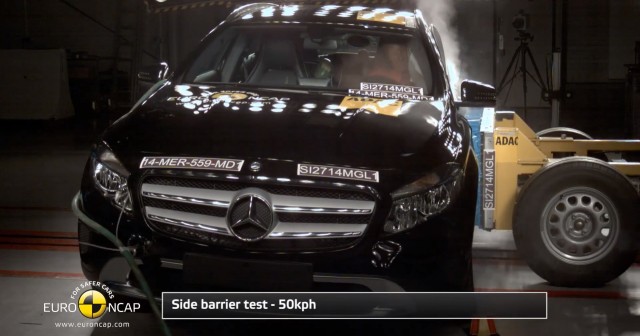 The bods at Euro NCAP have been busy crashing cars again in the name of science and deemed that the Mercedes-Benz GLA is a very safe car indeed.

The compact crossover (tested in GLA 200 CDI Urban guise) scored an impressive 96 per cent for adult occupant safety with particular praise for how it fared in the side barrier impact test where it score maximum marks. The 'active bonnet' fitted to the car also meant it scored well in pedestrian protection with the bonnet being raised on actuators to provide a softer landing once a collision with a pedestrian is sensed.

Not faring so well in the latest raft of crash tests was the Toyota Aygo and by extension its siblings, the Peugeot 108 and Citroen C1. In the frontal impact test the steering wheel, ignition barrel and dashboard fascia presented a risk of injury to occupants, which goes some way to explain why the Aygo only managed a four-star rating. That is one more star than the original Aygo managed when it was retested recently, however.

And the Aygo is actually in good stead as its four-star rating is shared with the all-new Renault Twingo, one of its rivals in the city car category. In the Renault it was the rear movement of the pedal box that was its undoing with the steering wheel (presumably) staying firmly in place.

Anything else?
Propping up the table for the latest rounds of crash tests are the Citroen Berlingo and Nissan e-NV200 electric van/people carrier. Both suffered from the same movement of steering wheel and dashboard facia as the Toyota Aygo while the Nissan was said to provide minimal protection in the side pole test. At least it could be tested - as the Berlingo does not feature a curtain airbag as standard it could not be subjected to the same test. The Citroen's score will be shared with the virtually identical Peugeot Partner.