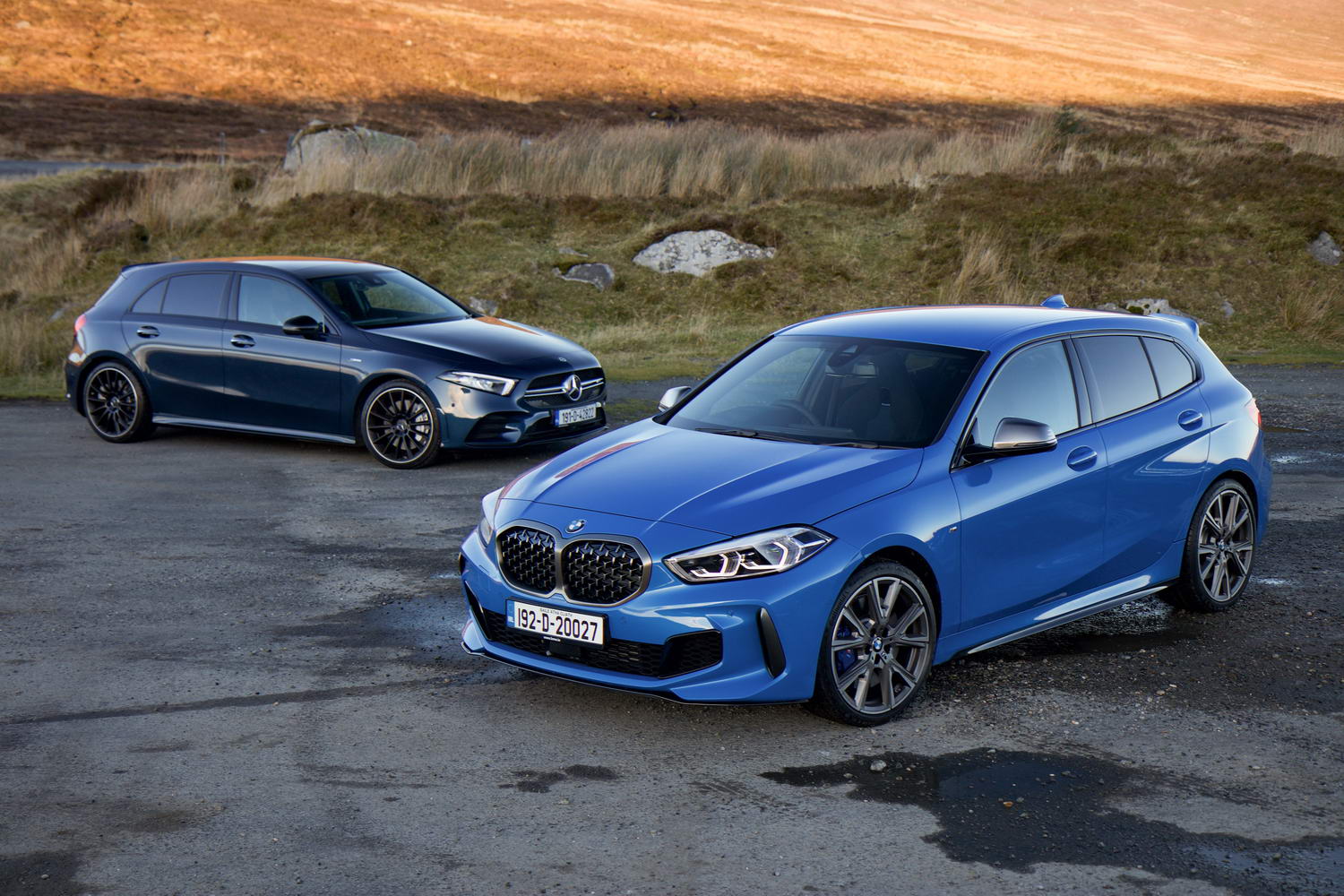 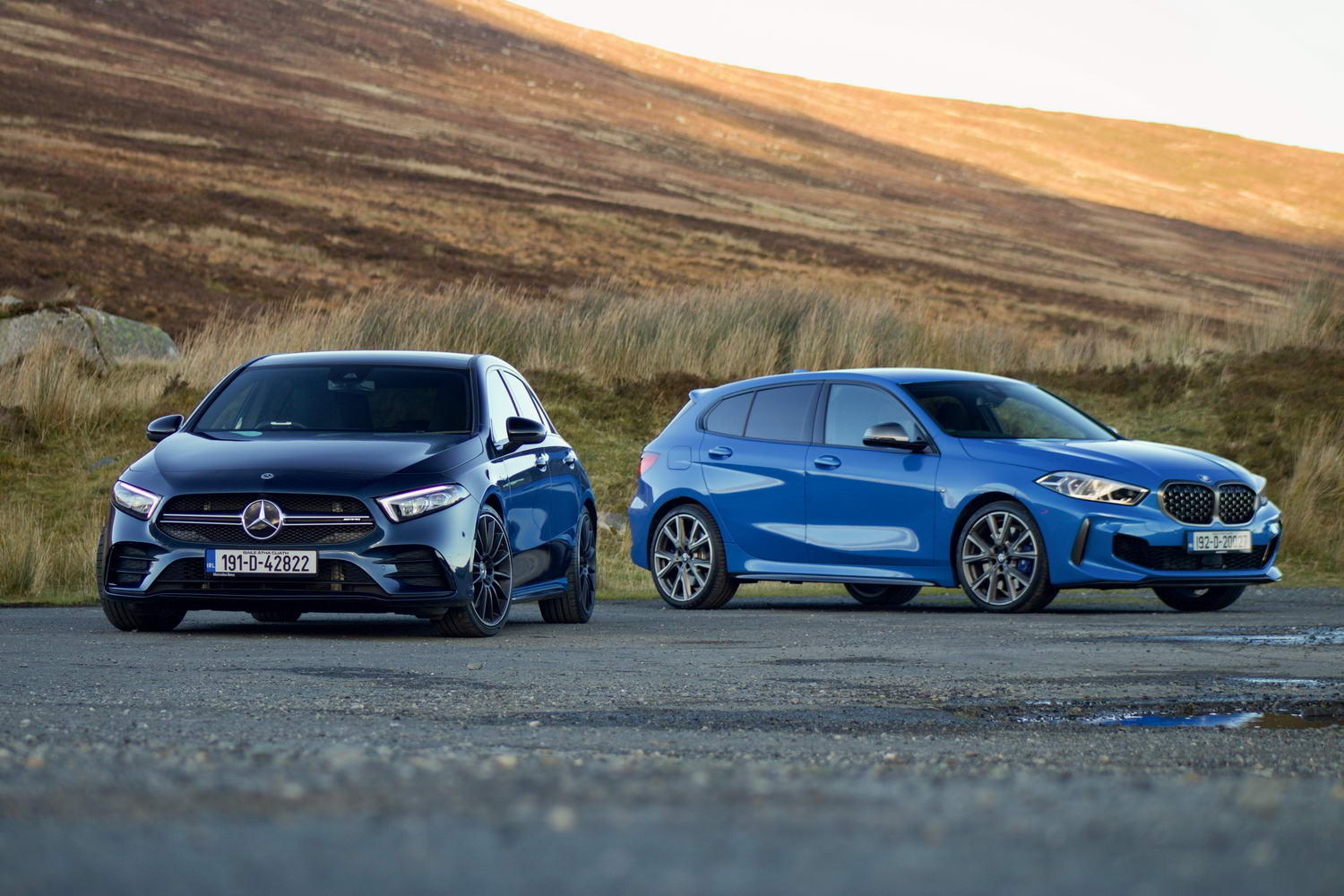 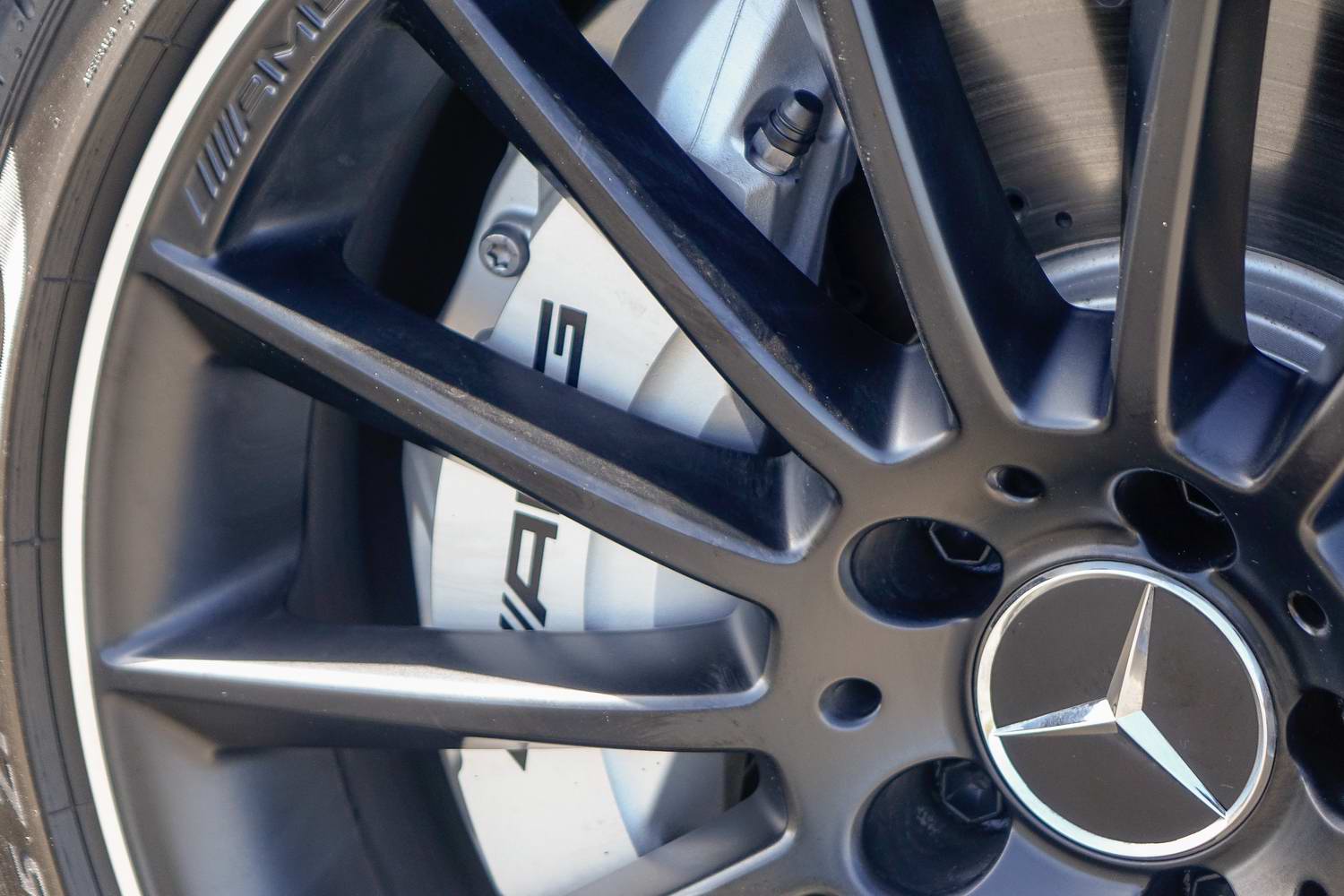 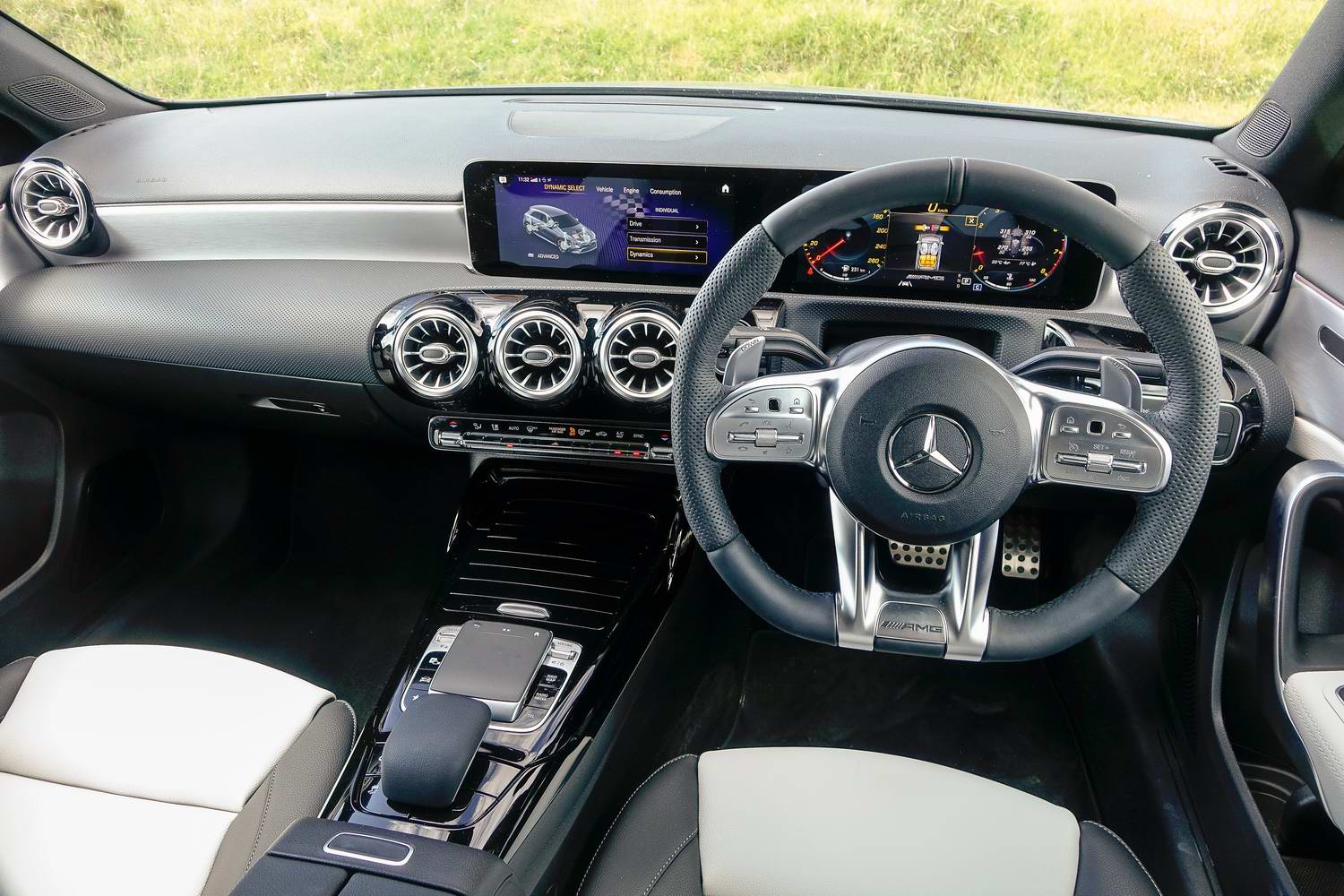 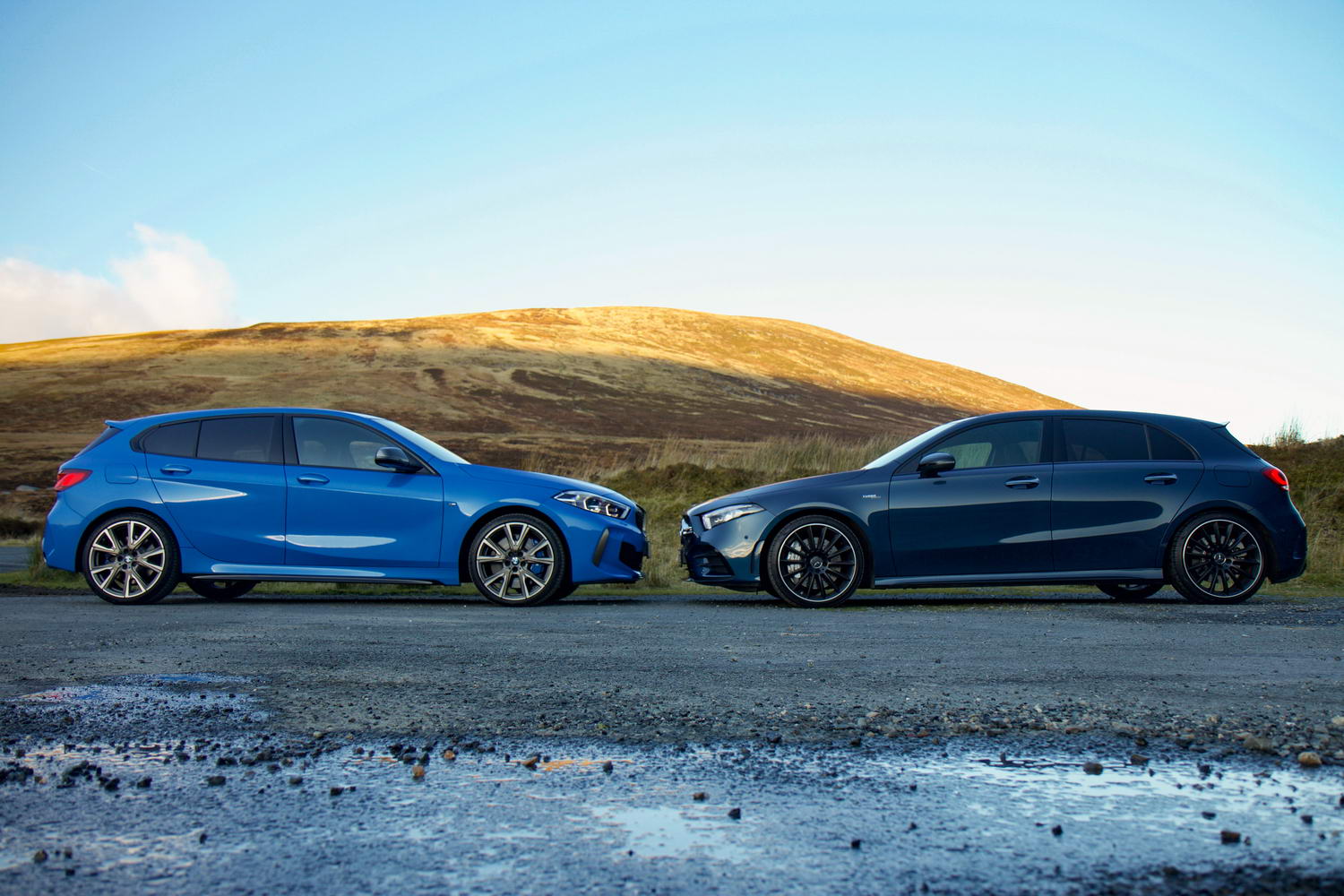 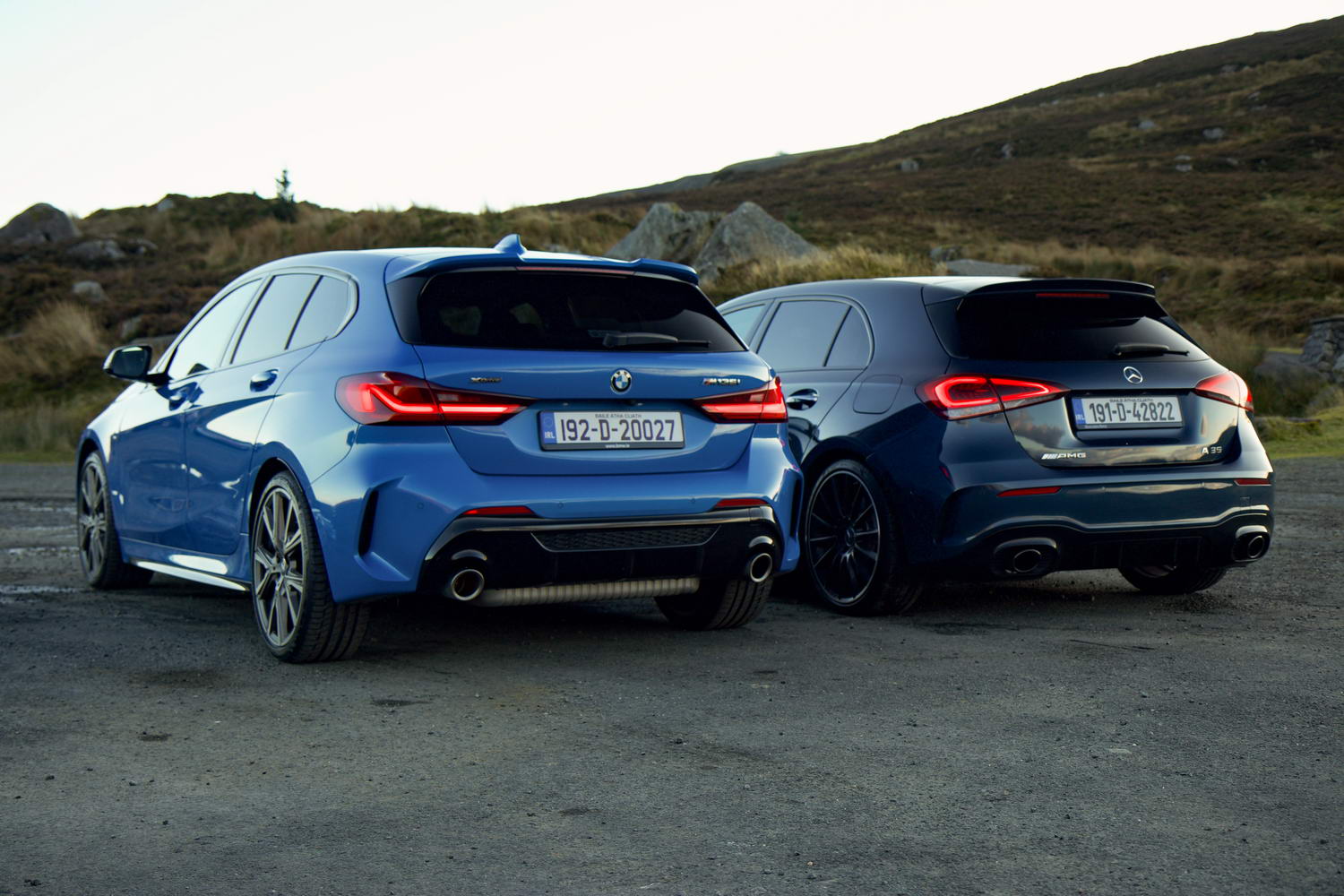 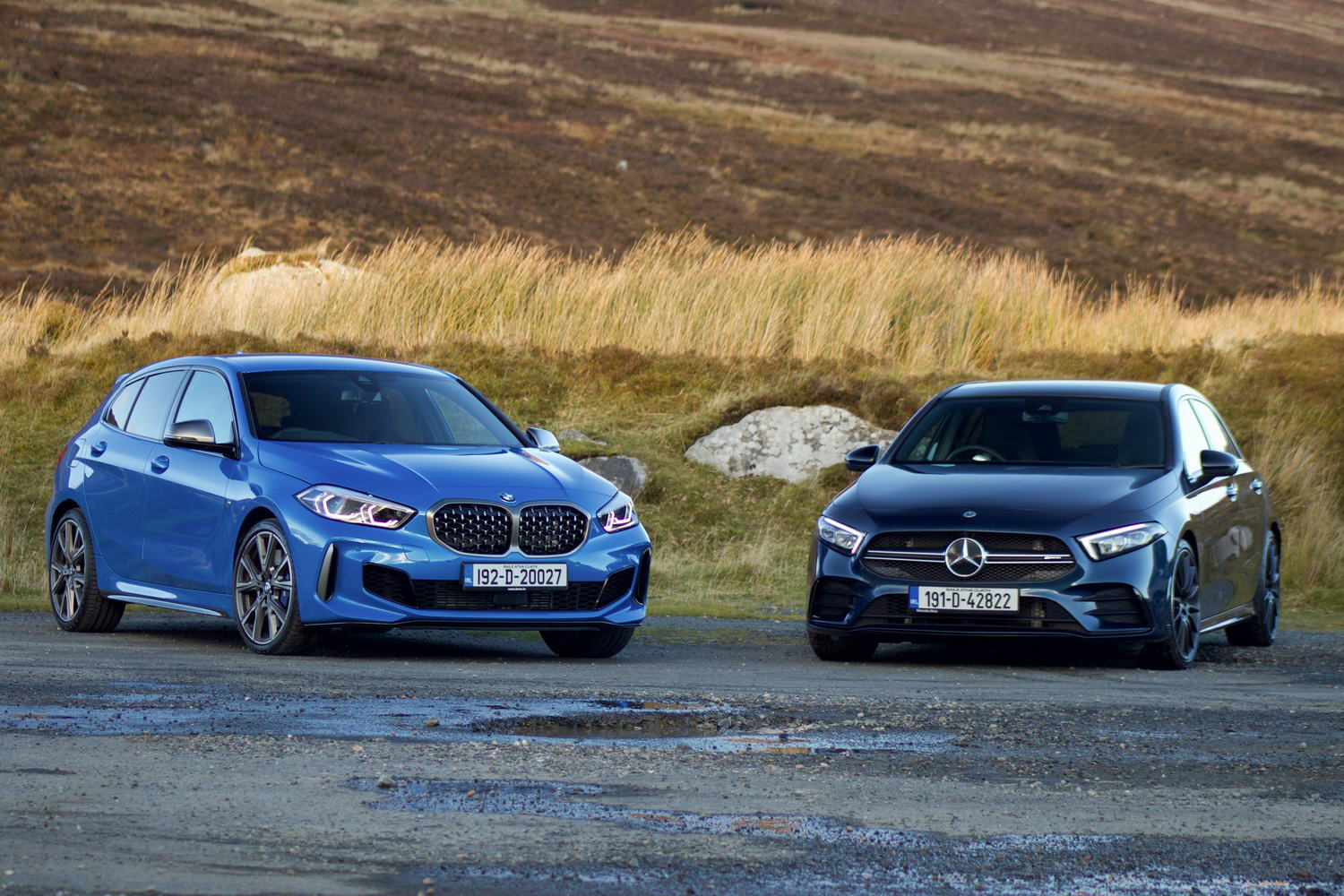 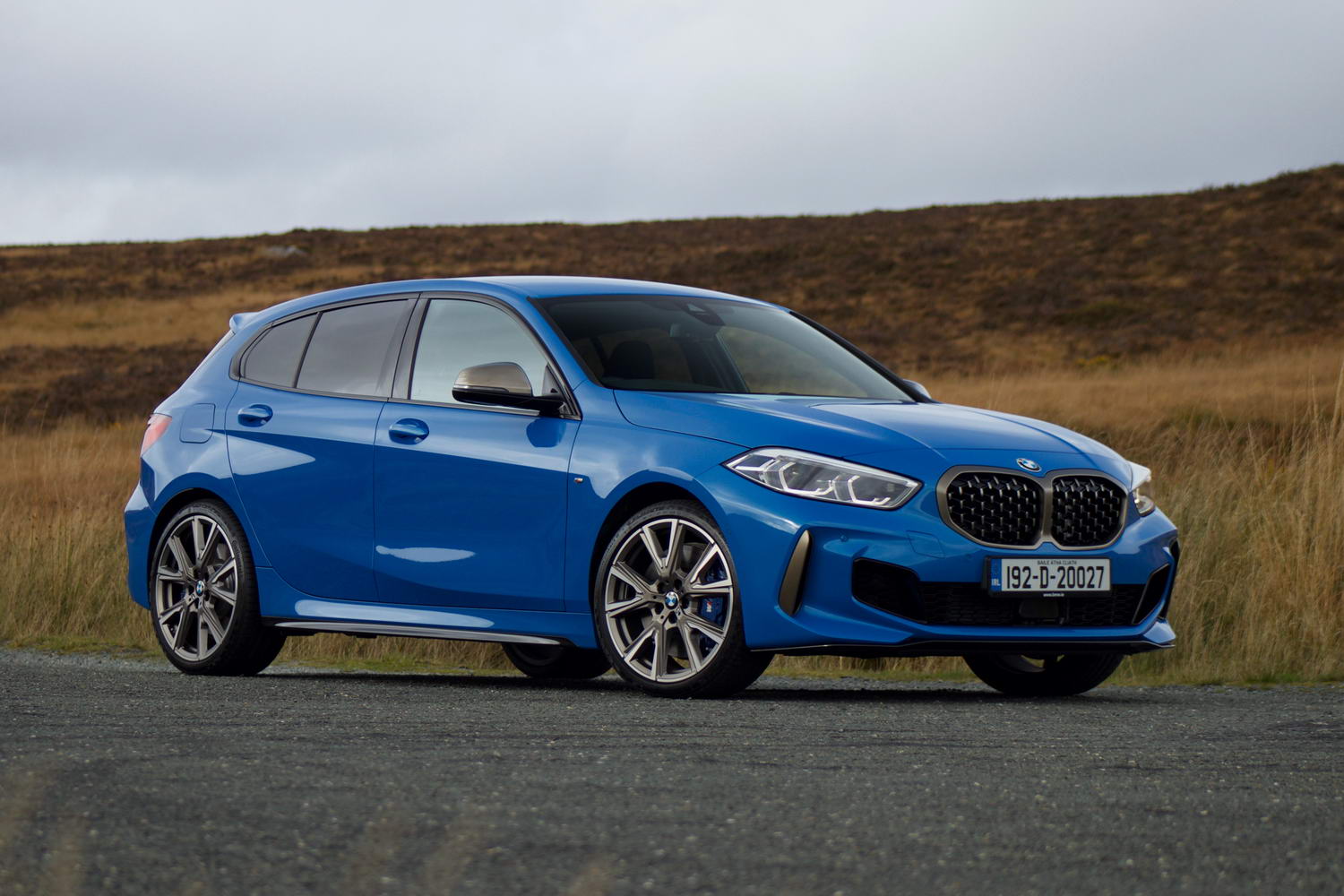 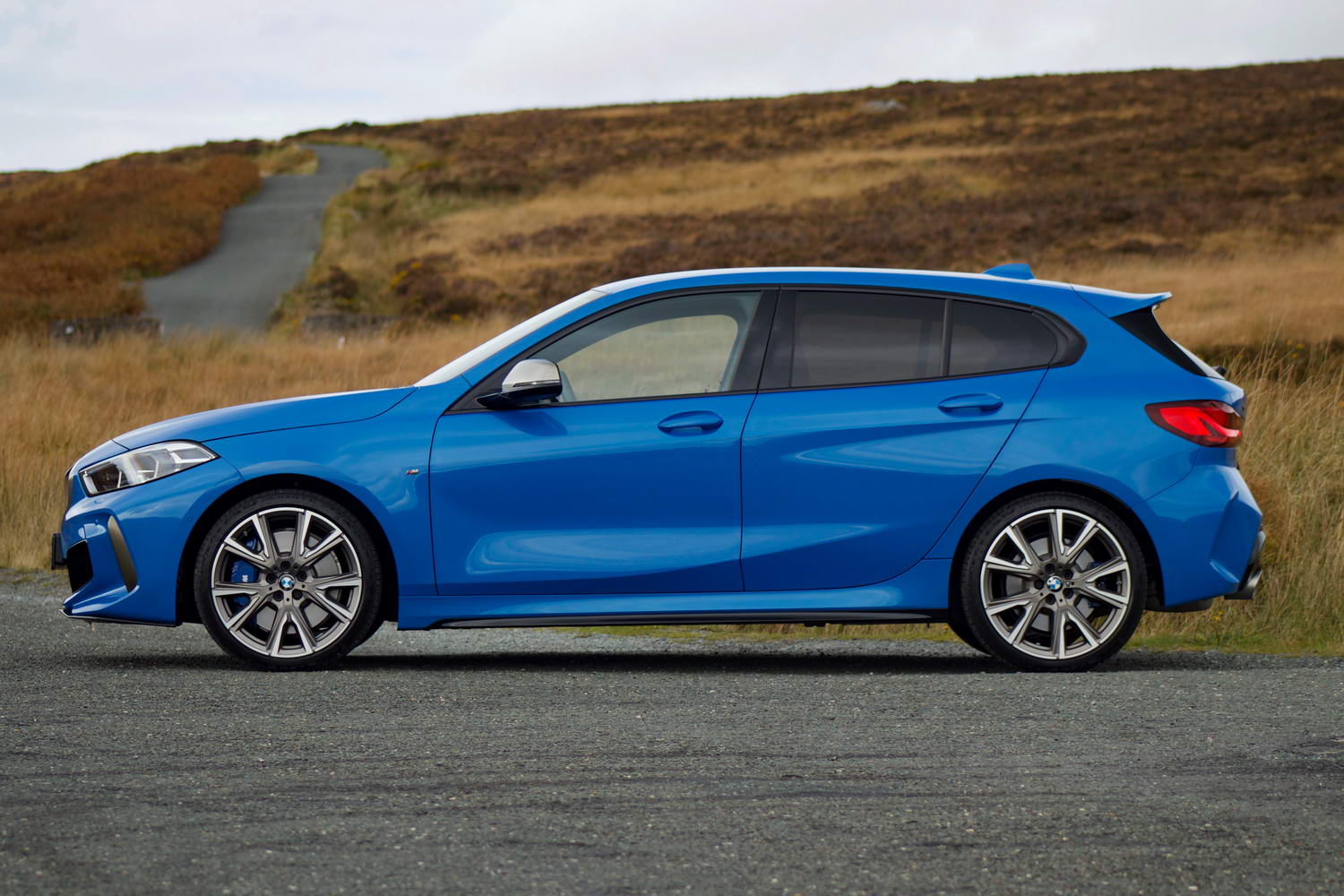 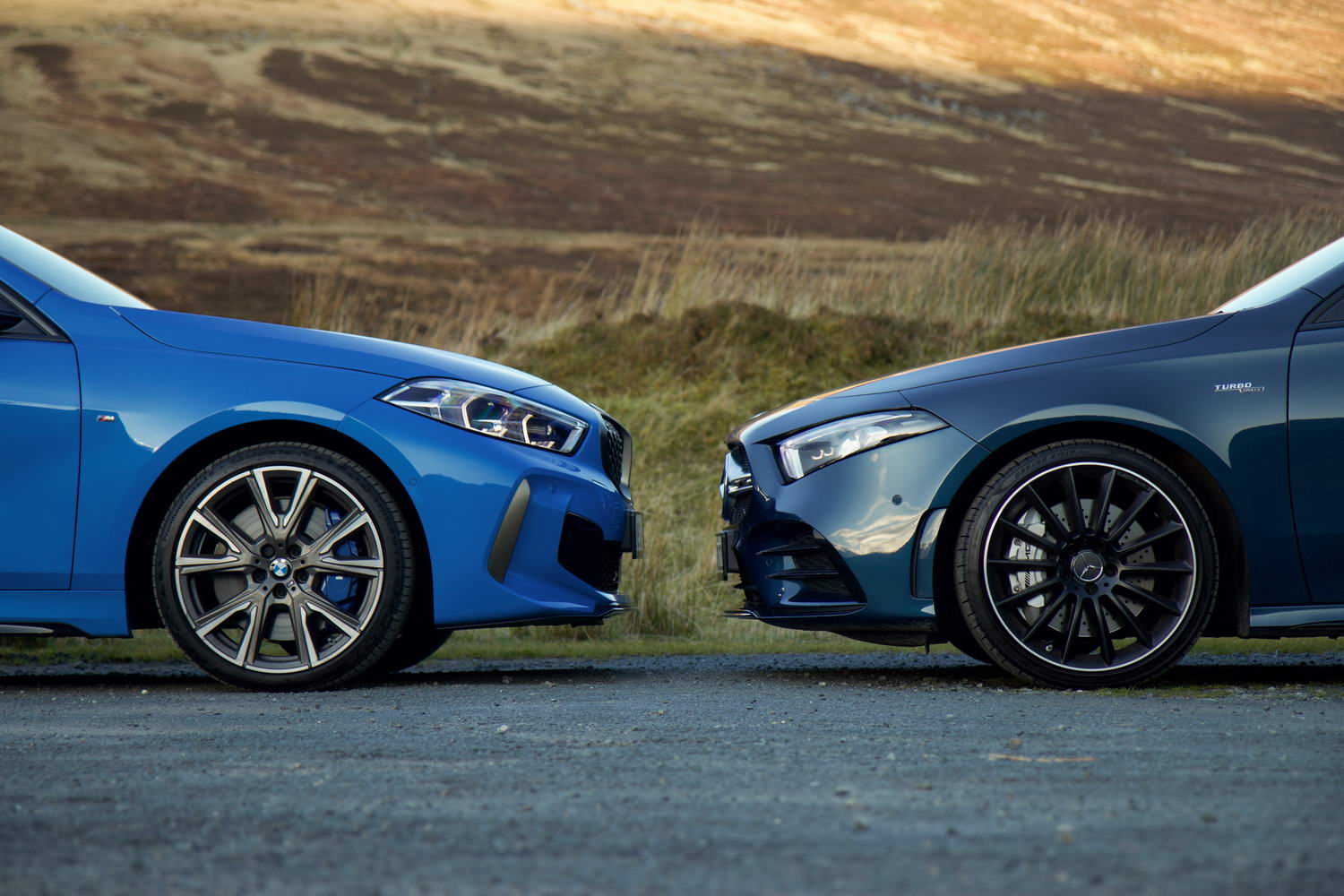 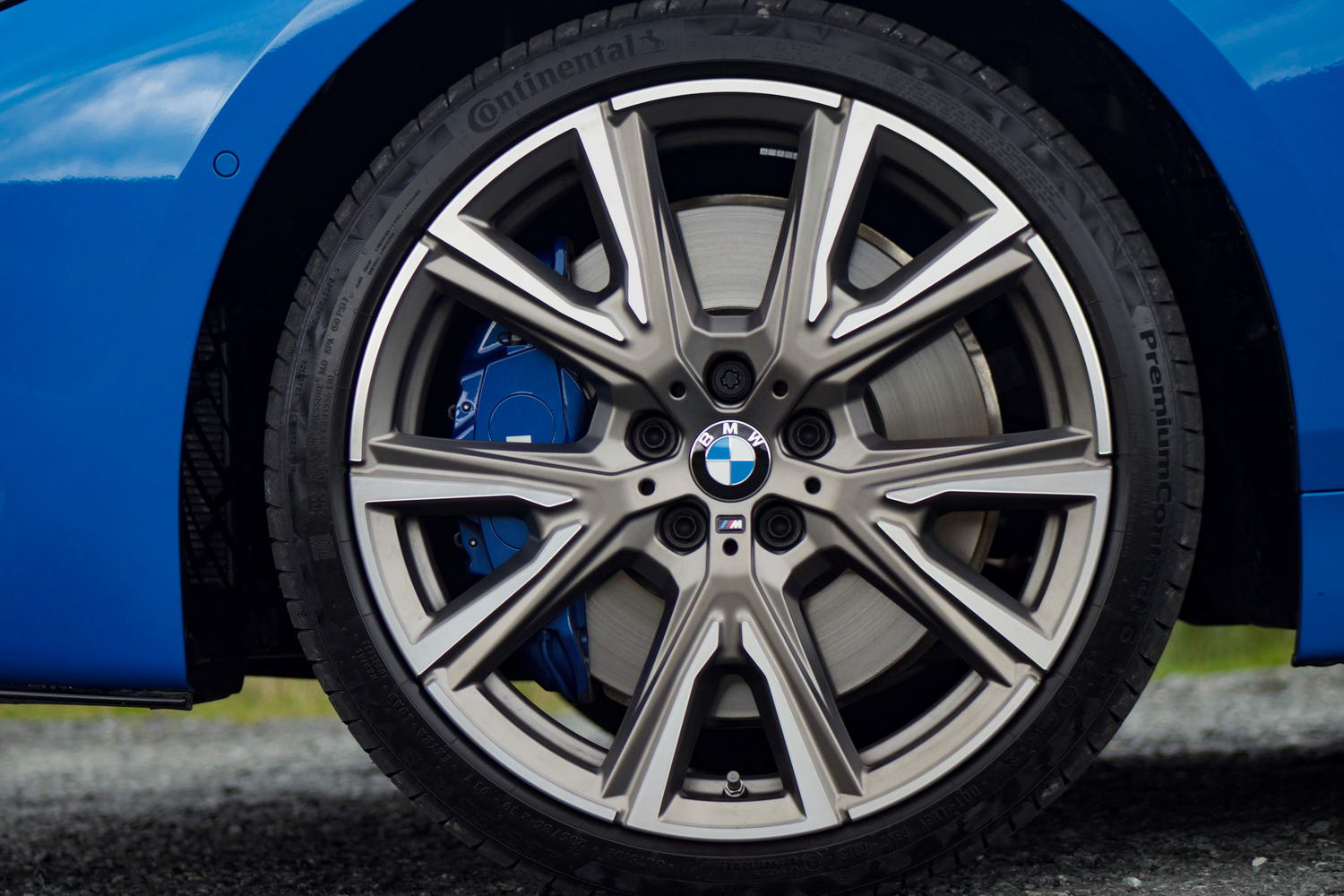 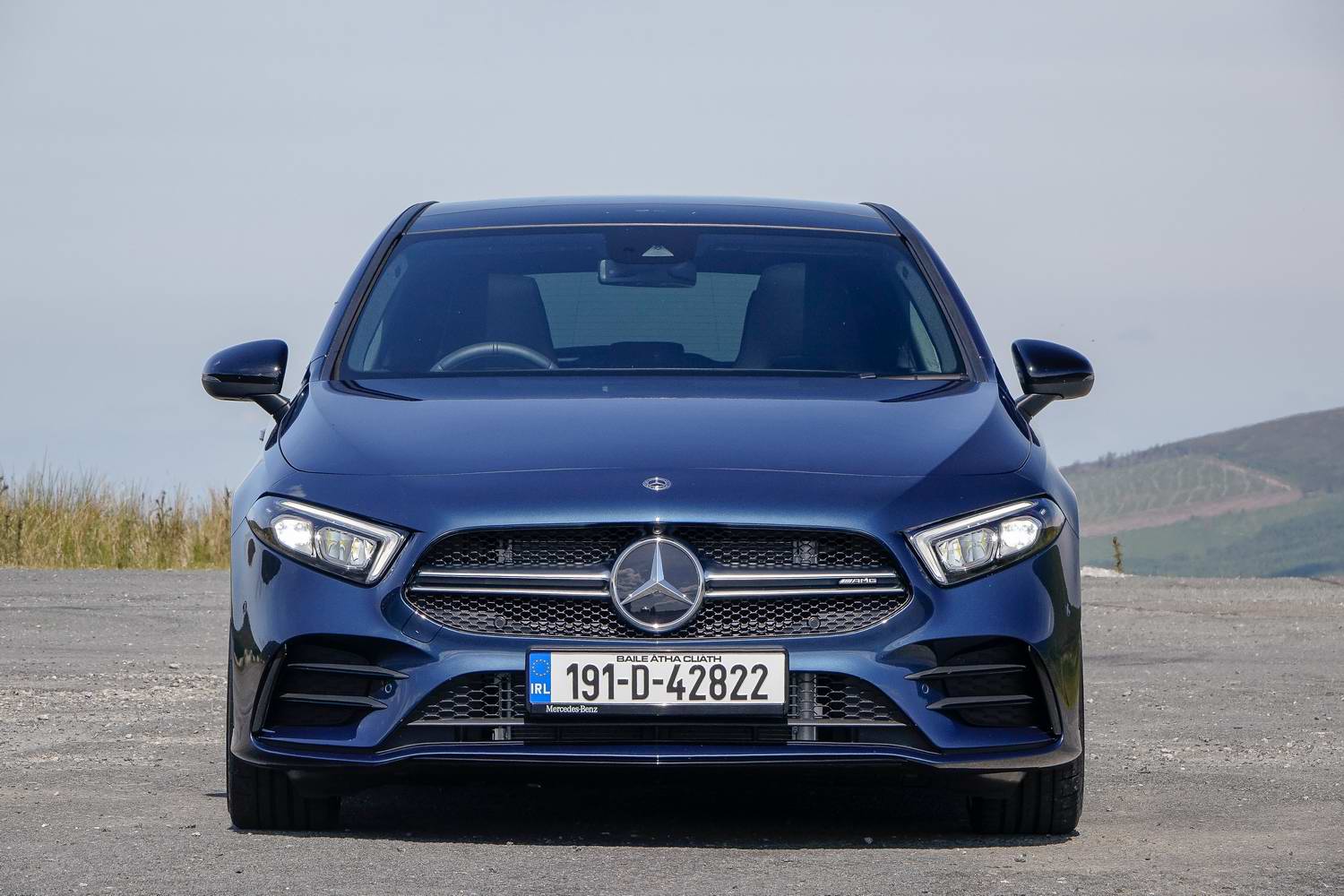 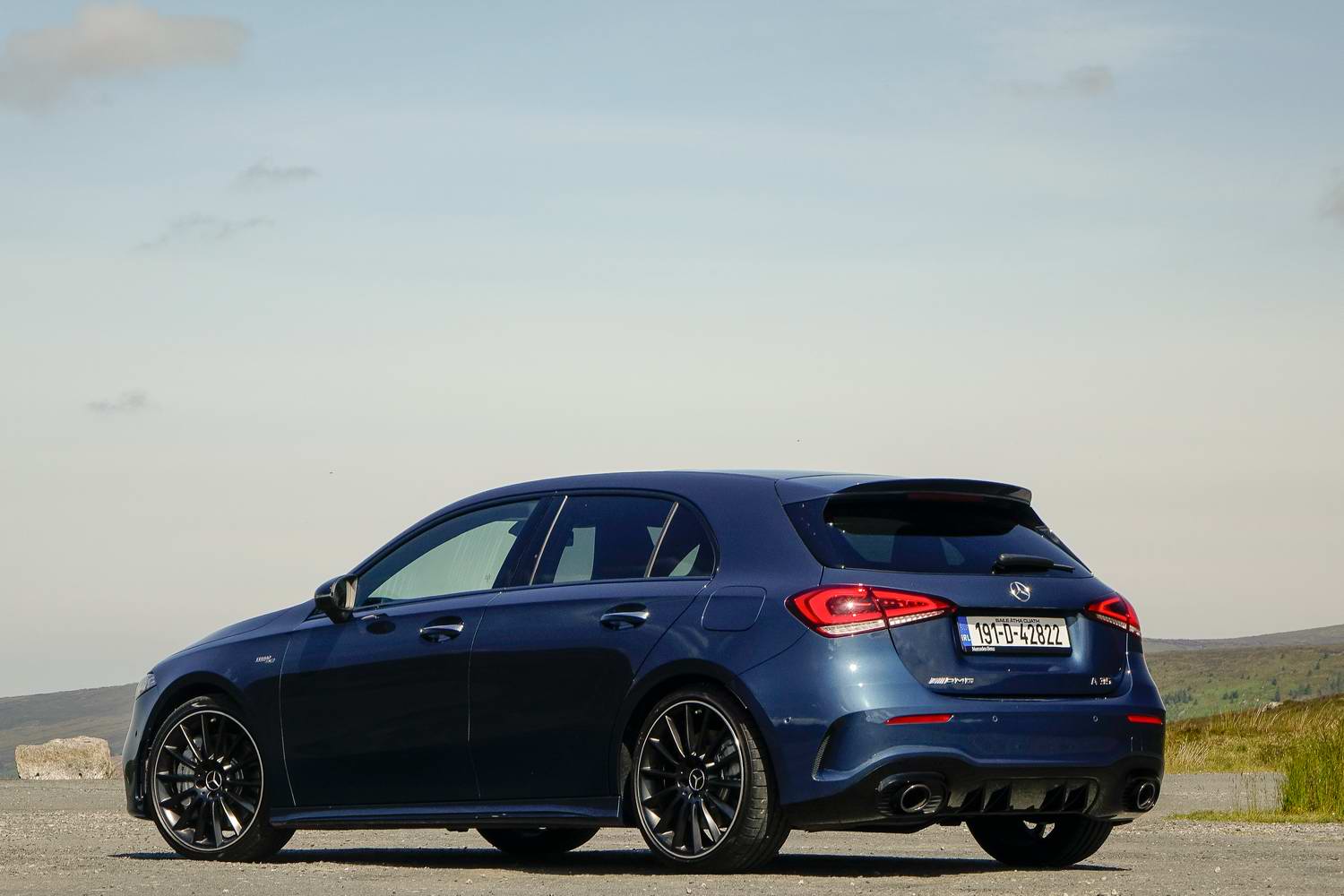 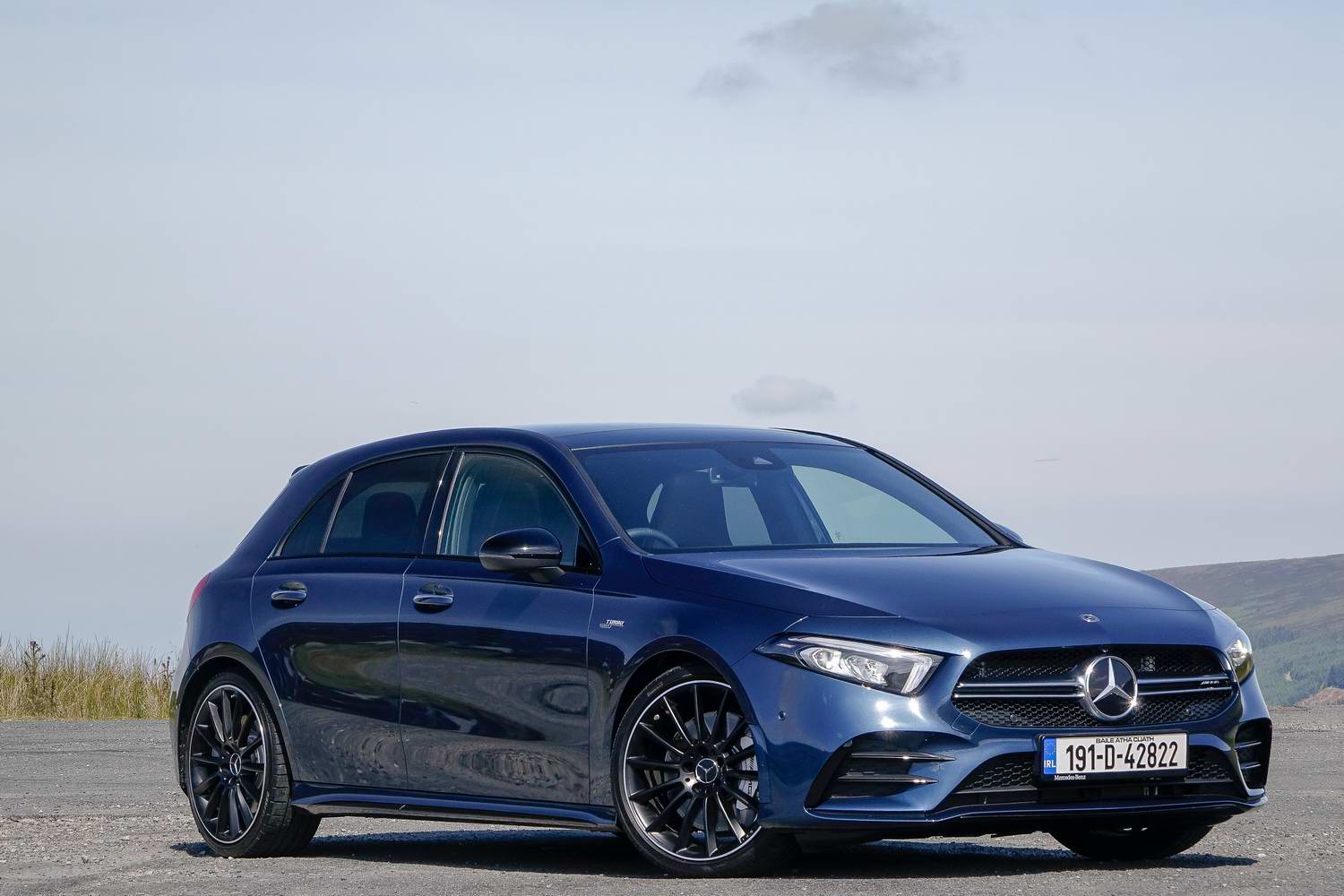 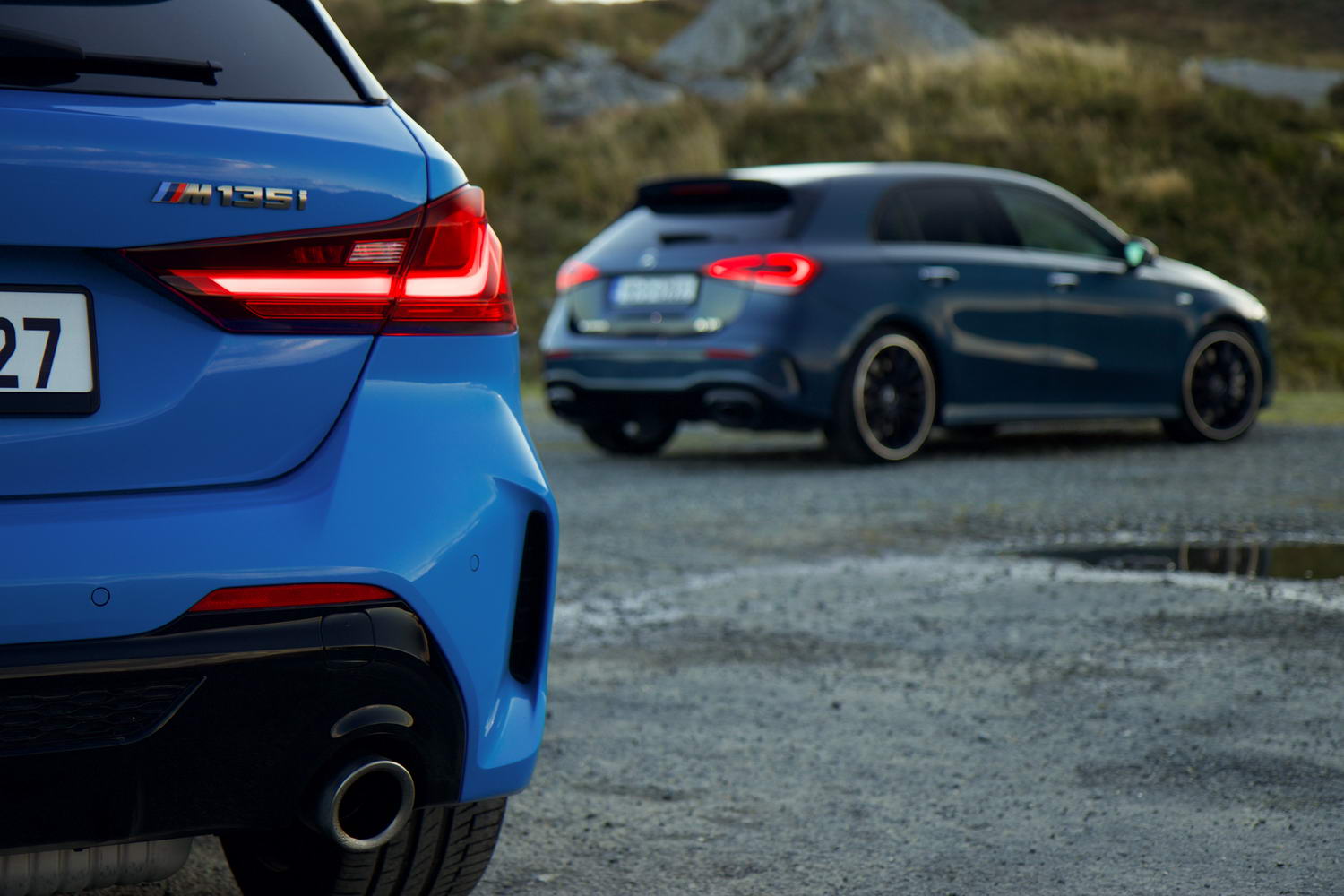 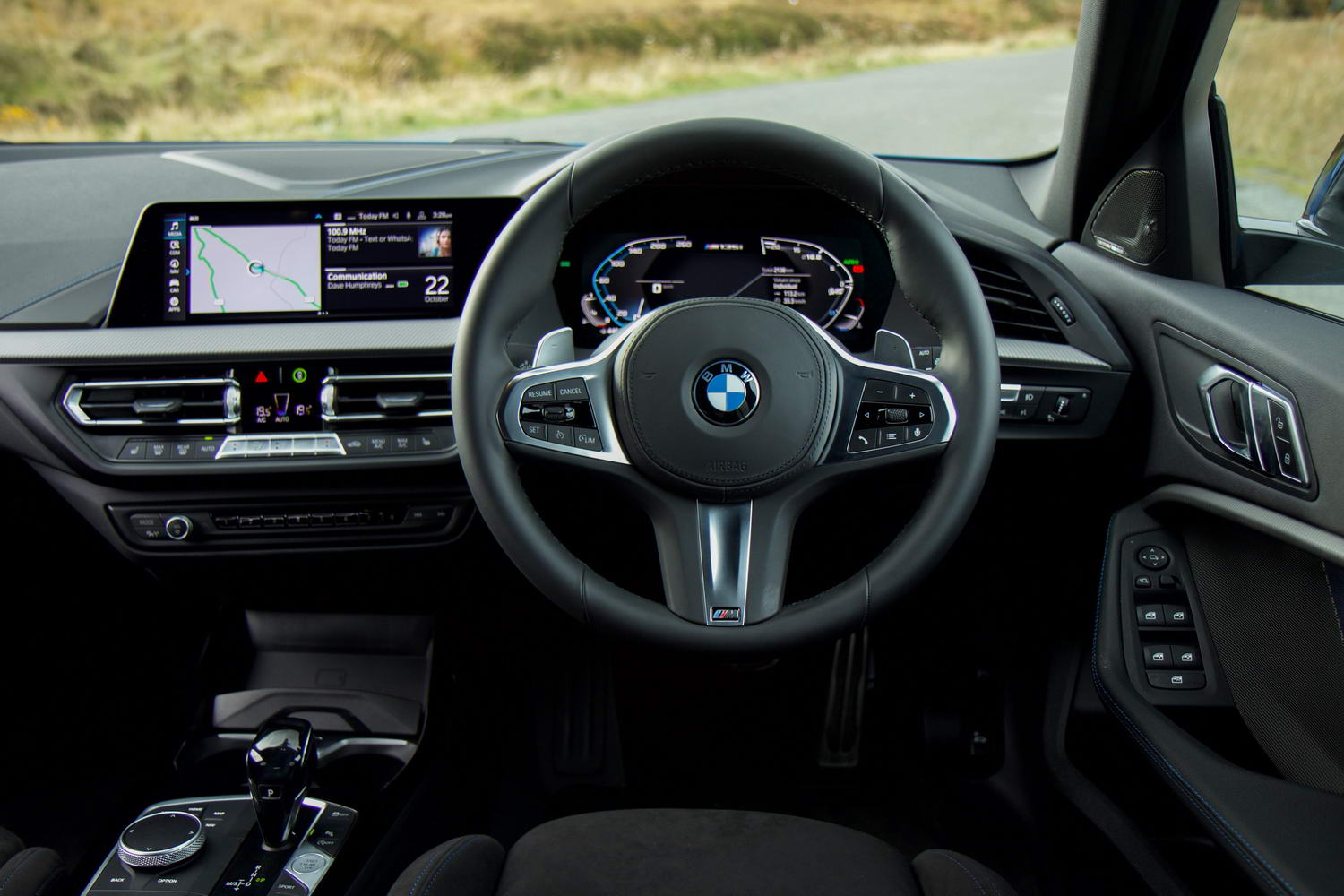 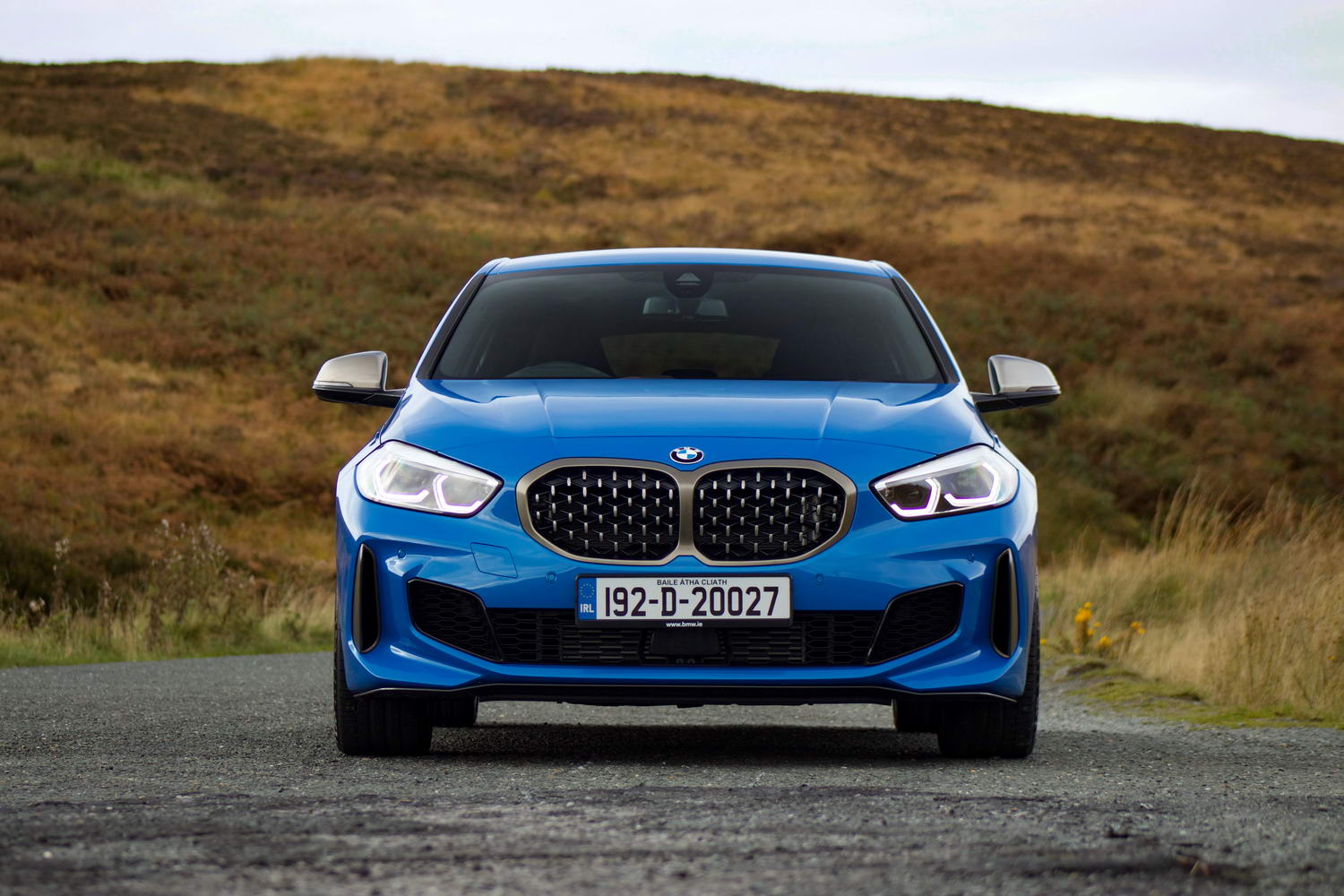 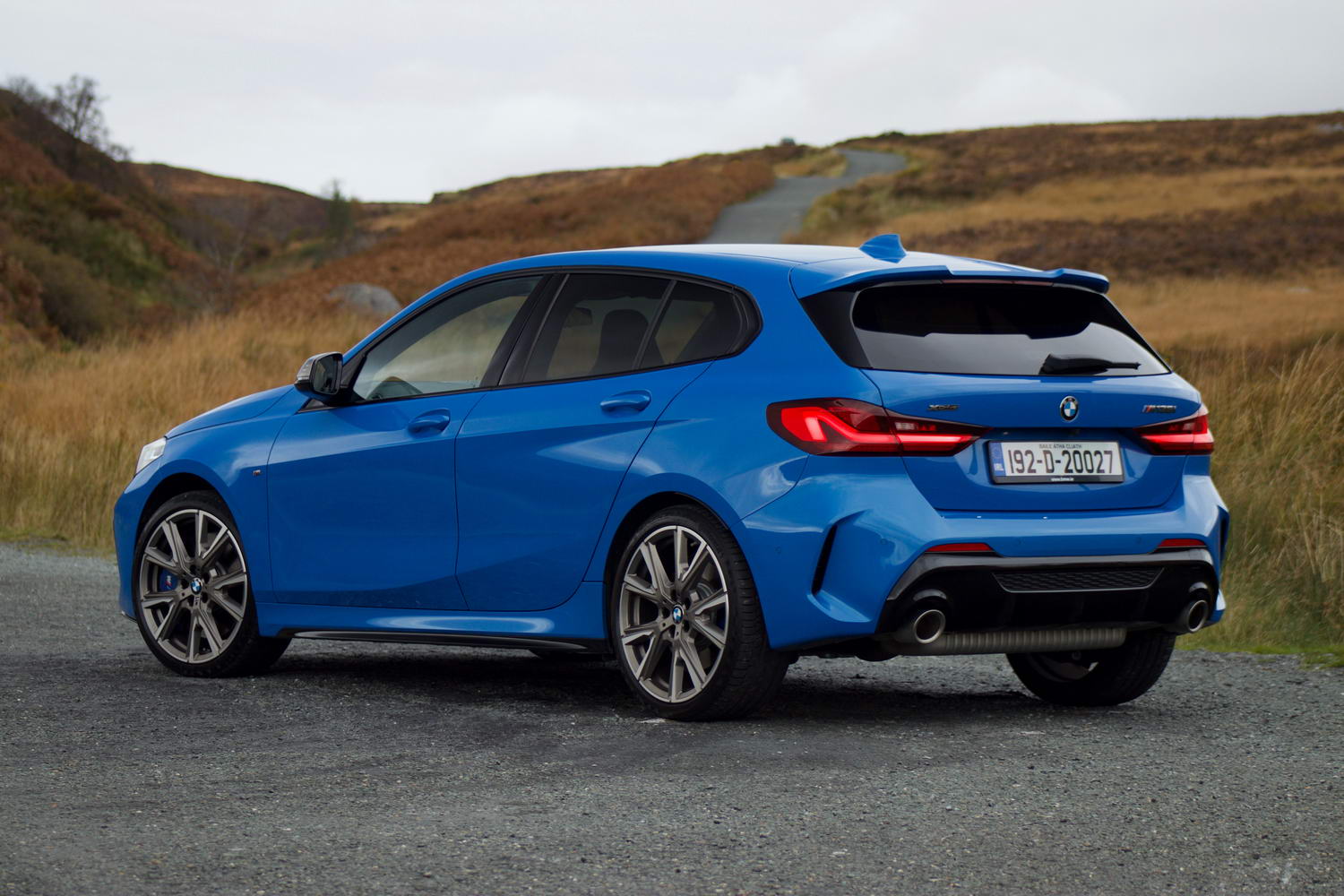 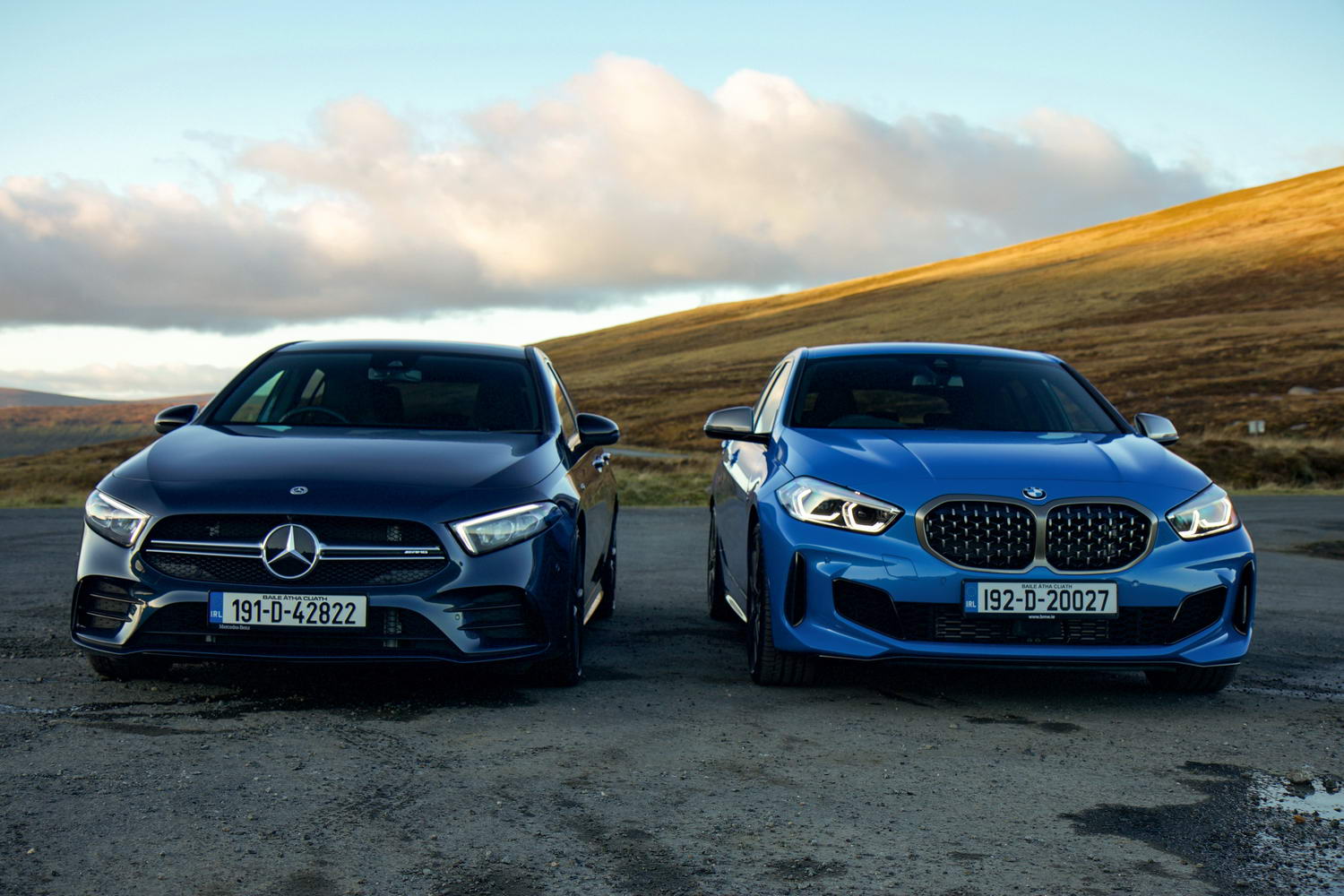 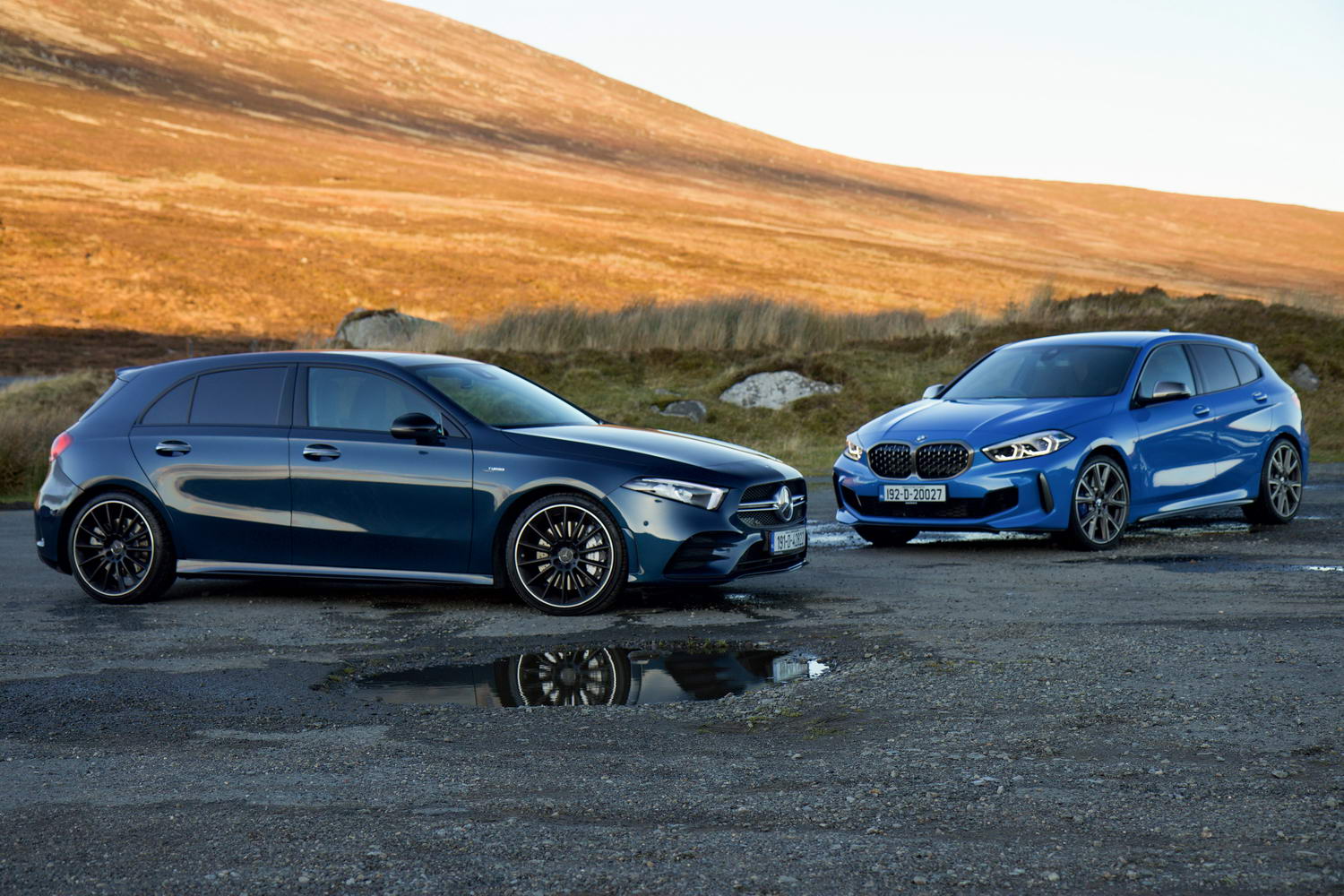 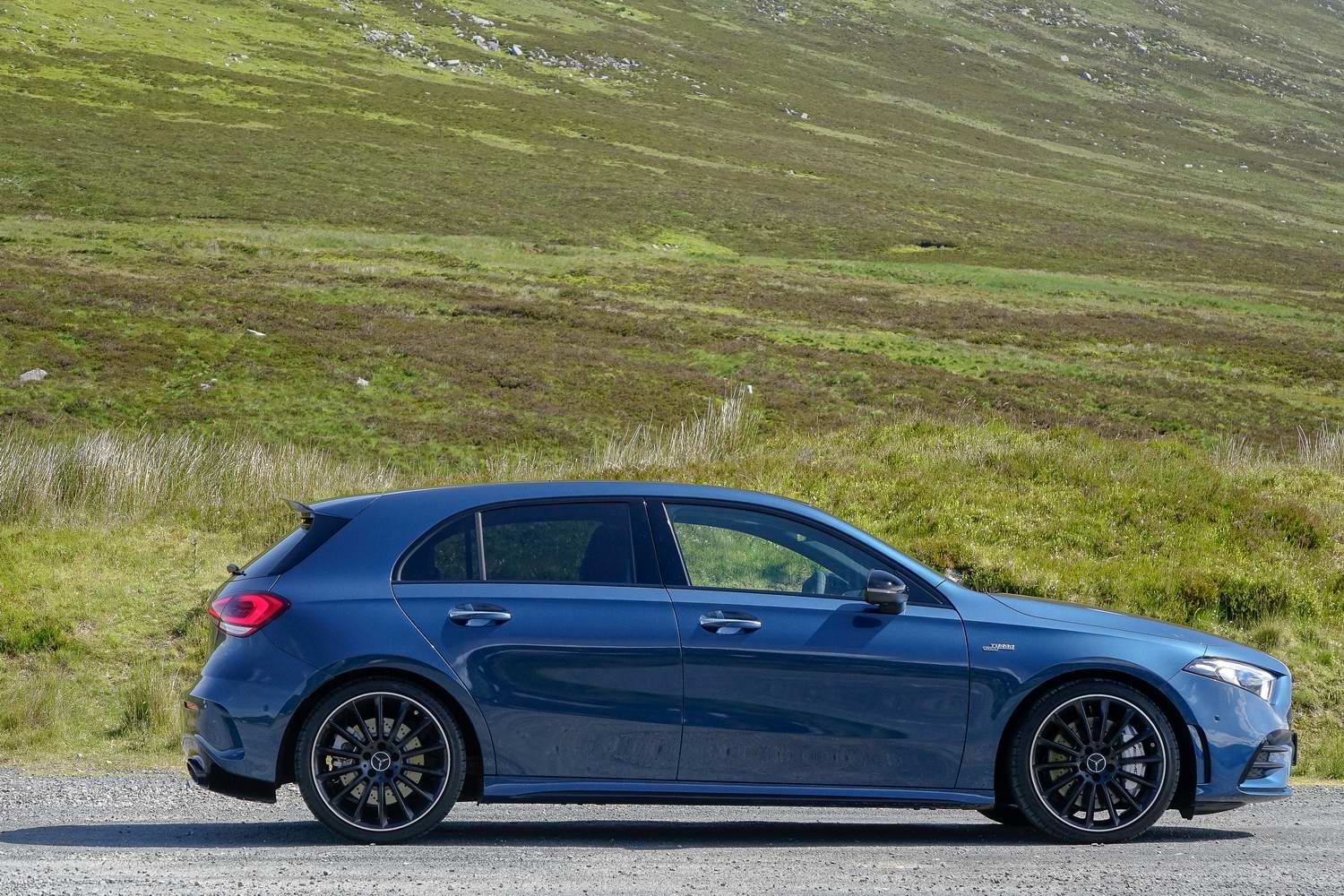 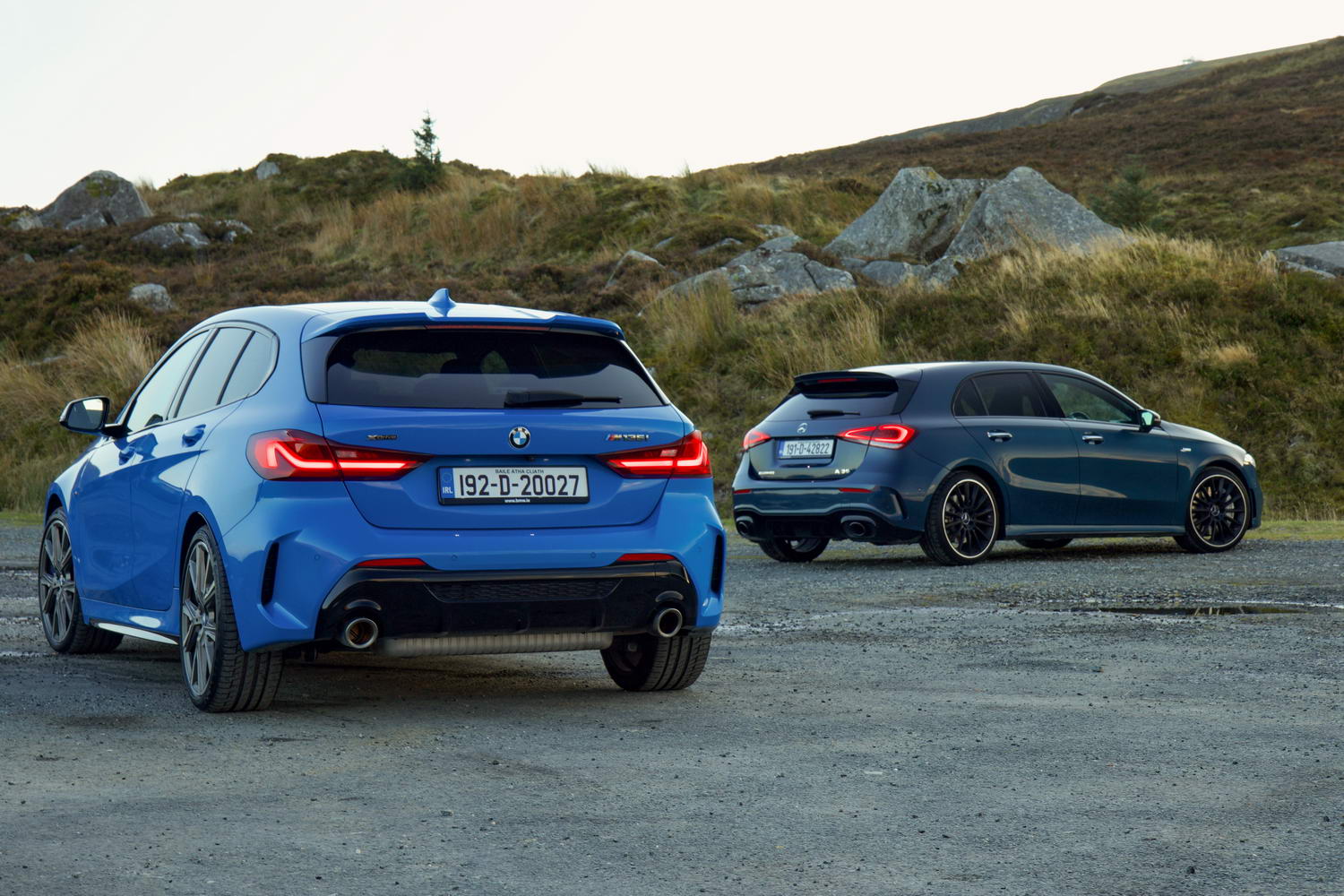 Two premium German hot hatches, the BMW M135i and Mercedes-AMG A 35 are equally matched, yet they're very different.

The world of hot hatches as we know it is evolving into unknown territory, including everything from plug-in hybrids to stripped out two-seat specials and everything in between. Names like Ford, Honda and Volkswagen have storied form in sprucing up their various hatchback models. Meanwhile, during the 1990s, the premium German carmakers were focusing on other things, like becoming embroiled in a horsepower war. But now they're focusing on serious hot hatches, including the BMW M135i xDrive and Mercedes-AMG A 35 4Matic tested here.

As BMW expanded its range downwards to give us the 1 Series, we got the wonderfully silly and rear-wheel-driven M130i (which you could even get with a manual gearbox). The M135i of today is quite a different machine, largely due to its xDrive transmission and loss of two cylinders in comparison to that first M130i. Although subjective, the consensus is that the current 1 Series is ugly as sin, but it is far easier on the eye in this trim as the M135i gets Cerium Grey accents on the door mirrors, bumper vent surrounds and the kidney grilles. These work particularly well with the Misano Blue paintwork. We reckon that the two-tone V-spoke 19-inch wheels look ace too.

Mercedes-AMG has only been giving us hotter versions of the A-Class since the previous W176 generation and this current model looks superb. Even the regular A-Class is a handsome thing, a far cry from the innovative A-Class of Elk Test infamy. In this dark Denim Blue Metallic colour the A 35 does a better job of flying under the radar then the BMW, save for the rear spoiler. Aside from sitting lower, the A 35 seems like the less showy of the two cars, though the specification of this example contributes to that. The curves and lines complement the lowered stance, which is enhanced by the optional 19-inch wheels pictured.

On the inside, both cabins are to a higher standard than the norm, though it's the A 35's that feels a bit more special. Both cars also have ambient lighting, yet it's the Mercedes that takes it to a whole other level. Even after the novelty of ownership wears off, sitting inside the A 35 at night will still feel special. Both cars feature cabins that look and seem reasonably well made, though the A 35 we drove did have some creaks and rattles from the dash. That aside, the Mercedes-AMG is more attractive to our eyes from an aesthetic standpoint. Its dual-screen setup and shallow dashboard gives a greater sense of space. Features from the more senior AMGs have trickled down, too, such as the rotary controller for driving modes on the steering wheel.

In comparison, the BMW doesn't look quite as special inside, though it's not without its own notable features. The sports seats are especially comfortable, and that bit snugger than the AMG's, while the iDrive infotainment system is still lovely to use and uses a rotary controller that's far more intuitive to use than the square trackpad in the A 35.

Yes, both cars produce the same 306hp output, but the BMW gets a useful 50Nm more torque at 450Nm, while the two cars are limited to 250km/h (a moot point in Ireland, obviously) and only separated by a tenth of a second in the 0-100km/h sprint, in the A 35's favour at 4.7 seconds. The inclusion of all-wheel drive and an automatic transmission in each car underscores the performance on tap. As closely matched as the cars are on paper, it's the BMW that feels distinctly quicker as speeds rise.

On top of that, the M135i has a forgiving ride, which helps on poorer road surfaces. Point-to-point it's undoubtedly a quick car and the steering is just that little bit sweeter of the two, as well. It feels meaty and has just the right amount of weight to it, especially when you're turning into a challenging bend. The Continental Premium Contact6 tyres fitted here might not be the outright grippiest for such a car, but they certainly contribute positively to the experience. However, you can always feel the BMW's mass, especially when you start to hustle it. Carry more speed through a sequence of corners and you can't help but feel that there's a lot of weight being managed, even though it's only 45kg heavier than the baby AMG. It doesn't noticeably detract from the high levels of grip that the Bavarian hatch finds, however.

As well as the M135i holds it all together, the A 35 is unshakable from its tail. In fact it's almost too unflappable, delivering near clinical levels of grip and road-holding. We've previously referred to it as the 'junior AMG' car, but there's still a characterful hard edge to the engine, especially when you run it closer to its redline. The body control is excellent, to; though it rides more firmly than the BMW, it copes well with the lumps and bumps of everyday driving. It may have only a seven-speed transmission (compared to eight gears in the BMW), but it works well, and its cause is helped further by nicer gearchange paddles behind the steering wheel. Driven back-to-back with the BMW, the Mercedes seems like more of a performance machine in how its chassis and suspension feel. If only it had the M135i's steering.

For starters, neither of these cars are what you'd call cheap and, in a way, that sort of goes against the whole point of hot hatches. Granted, these are the premium offerings in the class, but with the M135i costing from €52,247, and €59,245 in the case of the A 35, they can get very expensive once you start adding some options. And you will need to add some options. For example, that nicer dual-screen setup in the A 35 is part of a Premium Package that includes the snazzy ambient lighting, parking assist systems, keyless entry and start and navigation, adding a total of €5,024. In the BMW, a similar Technology Pack adds a head-up display, parking system and adaptive LED headlights for €2,389.

You do get 'essential' items in both cars as standard, like LED headlights, heated front sports seats, sportier steering wheels and decent infotainment systems, in addition to the performance-oriented styling of the two cars. But, really, you are paying that extra money for the badge on the bonnet. Many non-premium options are just as fast.

Considering the weight of the Mercedes-AMG and BMW M brands and reputation, both of these cars seem to have been brought in on something of a performance budget. What we mean is that there is already an abundance of 300-or-so horsepower hot hatches on the market. There's the ubiquitous Volkswagen Golf R and more affordable Cupra Leon and the harder-edged Honda Civic Type R. If anything, it's the Ford Focus RS that becomes an outlier with its 350hp. Yes, Mercedes-AMG also offers the A 45 S with a frankly ludicrous 421hp, but you'll need to sell some of your vital body organs to buy one. In comparison to that, the A 35 just seems too sanitised, but it's the BMW that misses the bigger opportunity since its M-derived hot hatch is no longer available with rear-wheel drive, as it had been in previous iterations. Surely a slightly bonkers 'M1' would be the perfect solution to those with families that dream of owning an M2? When it comes to the crunch, it's the Mercedes-AMG that gets the win by a nose, helped in part by its gorgeous cabin and stylish exterior and, despite the high price, it's the one that I'd rather own of the two.

I find the regular BMW 1 Series quite forgettable in terms of its exterior style. The M135i model does improve on that, thankfully, but still, the Mercedes-AMG A 35 trumps it, especially if you spend a little more on its specification, as has been done for the pictured example. Inside, there isn't as clear cut a winner for me, though the M135i's cabin just shades it if we're talking about standard cars without options. And regardless, I prefer the infotainment interface of the BMW. Conversely, I much rather the graphics and design of the A 35's digital dashboard.

On the road, there's not a lot between them and, actually, at normal road speeds, both of these cars are quite anodyne. Effective, undoubtedly, but exciting? I'm not so sure. You need to really fling the cars around to get the chassis to come alive, which is not something to be done on the public road. Sure, they make it possible for pretty much anyone to use their considerable performance whenever they want, but those that adore driving might find them lacking engagement. As Dave pointed out, the BMW rides better, but I wonder if that advantage would be eroded if the Mercedes rode on the standard (smaller) wheels. The BMW is also, slightly, more willing to allow the driver take control, but there's not much in it, in truth. For me, there is one clear differentiator between the two and that's the sound they make: I much rather the AMG's noise, which may not be sonorous exactly, but it is purposeful and less synthetic sounding than the BMW.

If I could get away with sitting on the fence for this one, I would. That's how closely I rate the cars. I'll cheat a little by saying that the A 35 is my preferred option, but so it should be for the price differential...