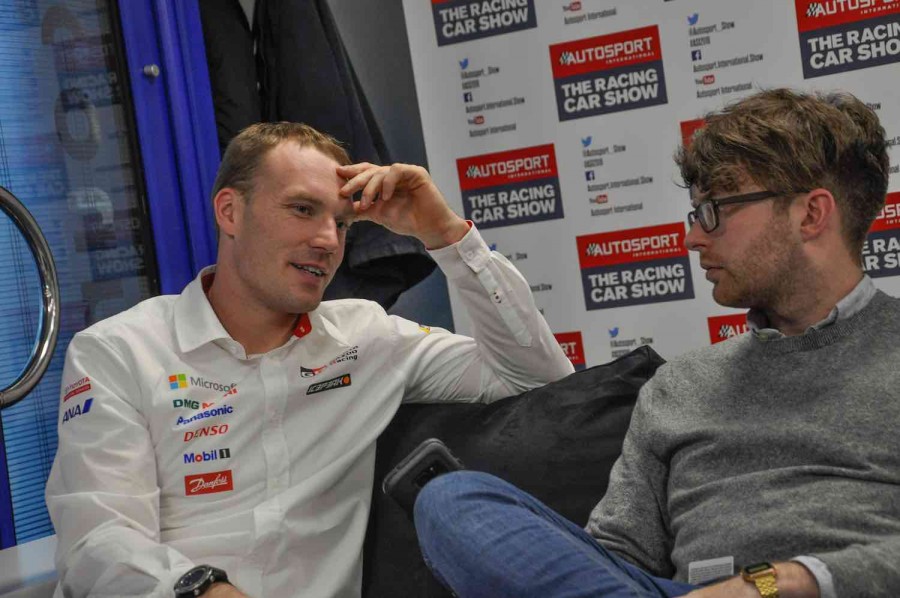 Maurice Malone speaks to Toyota WRC driver Jari-Matti Latvala about his passion for historic rallying, and his memories of competing on Irish tarmac.

I was fortunate enough to grab some time with Jari-Matti Latvala at the Autosport International show last week. By a sheer stroke of good luck, we were left undisturbed in the media centre for a spell, and the talk flowed.

Jari-Matti is one of the sport's icons, and his flat-out approach and tendency to wear his heart on his sleeve has endeared him to legions of fans all over the world. He's heading into what could be a pivotal year for him and his lifelong ambition to become world champion, with the outrageous-looking Yaris WRC now a seriously competitive package and the explosively quick Estonian, Ott Tanak, joining as teammate from M-Sport. However, Jari-Matti has been answering questions about the new season all morning, and getting the same interview as everyone else was not an option. Time to try something different...

MM: I'm going to talk to you about your fondness for historic rallying. Is that alright?

Jari-Matti's face lights up. While still trim and fresh-faced, his blonde hair is starting to recede. Lest we forget, Jari-Matti is the most experienced driver currently competing at the sport's top level, and the third most experienced of all time. He sits back on the couch, crosses his legs and begins to chat, his mandatory Toyota Gazoo Racing team-issue shirt and pants reading a bit like a shopping list.

JML: I started competing in historic rallying for the first time in 2009 with my father's Ford Escort BDA, and got quite excited when I won the Lahti Historic Rally. That kicked it off, and I ended up buying that car from him.

MM: Some of the onboards from those events are pretty spectacular!

JML: Yeah, the Escort was a lot of fun, very sideways, and the noise of the BDA was fantastic. That went on until 2012, then of course I moved from Ford to Volkswagen Motorsport, and so couldn't continue competing with the Escort. It wasn't all bad though, because one of my all-time dream cars was the Audi Quattro, and with Audi being part of the VAG group, I was able to use one of those instead!

The Quattro was really revolutionary when it debuted in the early 1980s, and I'd always wanted to experience what it was like to drive one and feel what those guys did back then. I started off with a Group 4 car, but what I really wanted most of all was to drive a Group B version.

MM: So that's why you decided to purchase a Quattro A2?

JML: Correct. Unfortunately, it was a little bit difficult to get parts for and work on, some of the components had to be specially produced, we had engine problems... I only did three events in the car before my career at Volkswagen came to an end. On the first one, the car broke down immediately. We had engine trouble on the second, and managed to finish the third, but now the car will have to stay in our museum for a while!

MM: What was the Quattro like to drive? Did it live up to your expectations?

JML: Lots of power, but also lots of turbo lag! It's like a big kick in the back when the boost comes in. Also, with the engine sticking out so far in front, it's difficult to get it to turn. You need to be quite aggressive. It's fun, though, and I hope to compete in it again in the future.

MM: With the early Celica GT-Fours now eligible for historic events, that was a logical car to buy when you joined Toyota, I guess?

JML: Believe it or not, I actually purchased an ST165 and an ST205 version in the summer of 2016, without knowing at the time that I'd end up becoming a Toyota driver! It was just a strange coincidence.

JML: (laughing) No, it's got the legal turbo! I've been doing some events with the ST165 lately, and I must say that it's really good fun.

Basically, my aim was to have a road car Quattro, Group 4 and Group B versions, and by spring we hope to have a Group A version of the Audi Coupe Quattro as well. In terms of Toyotas, we already have a Corolla WRC as well as the two Celicas, and I can tell you that there's an ST185 version coming as well. It's an ex-Armin Schwarz TTE car, and it's actually here in the UK, but is currently in pieces so we will need to do some work!

MM: That's an impressive collection of toys, and it's great to see a current frontline driver so enthusiastic about the history of the sport and the older cars. Can you tell me a little bit about your experiences of rallying in Ireland?

JML: I must say that I've got some great memories of Ireland. I did the Ulster Rally back in 2003, but 2007 was a big highlight for me, because I achieved my first-ever WRC podium on Rally Ireland that year. The conditions were so, so difficult; muddy and narrow and bumpy, but that was a fantastic weekend.

One thing that struck me was the enthusiasm of the Irish fans, and the sheer amount of WRC cars that took part. I think at one point, you guys had the most amount of WRC cars per capita of any country in the world, is that correct?

MM: Yeah, we had loads of them! It was pretty insane when you look back on it, but very cool to witness all the same. Can you see yourself returning to the Irish stages some day?

JML: Maybe one day, when my works career is over and I've got a little more time to devote to historic rallying! The problem at the moment is that my schedule is so busy, I can only pick events that suit, but you never know...

At that moment, Tommi Makinen appears, pointing at his watch. Time's up. I thank Jari-Matti and bid him good luck for the season, though I get the distinct impression that he would have been quite content to talk about his collection for the day. What a dude.