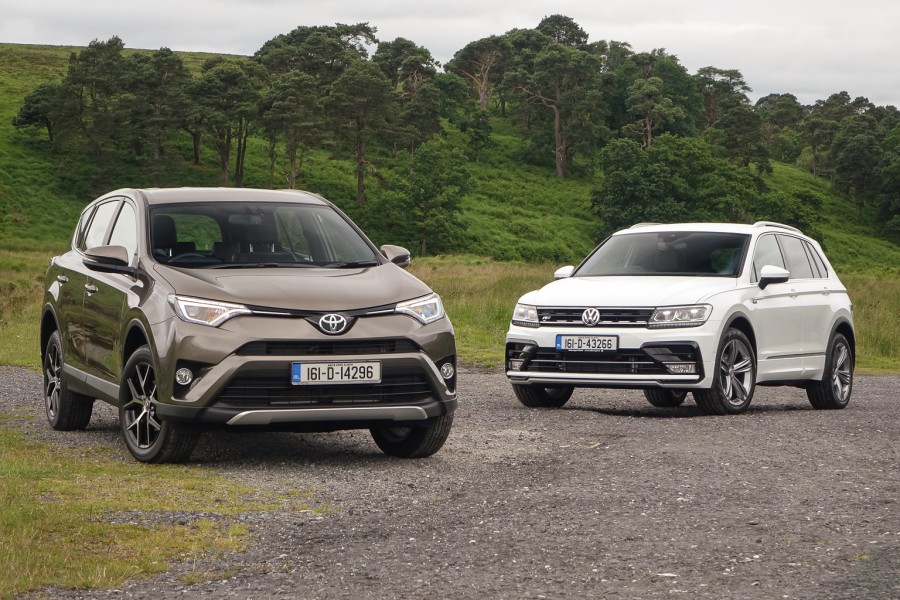 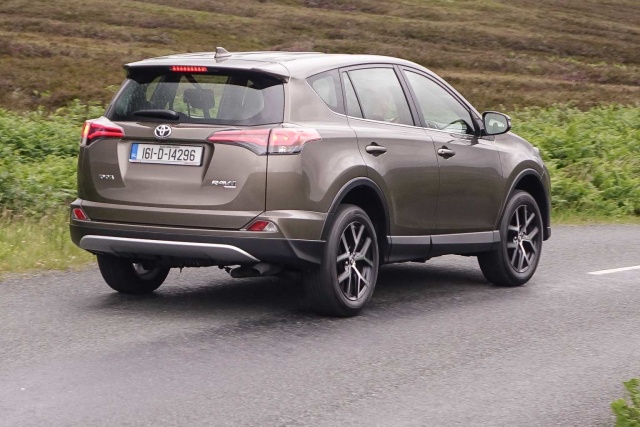 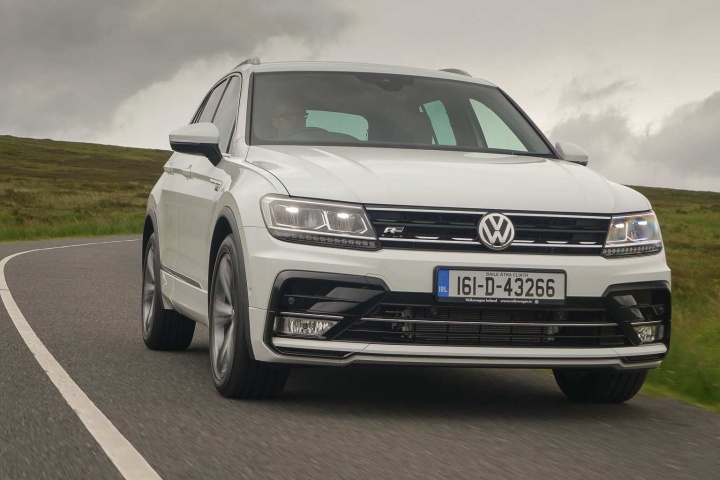 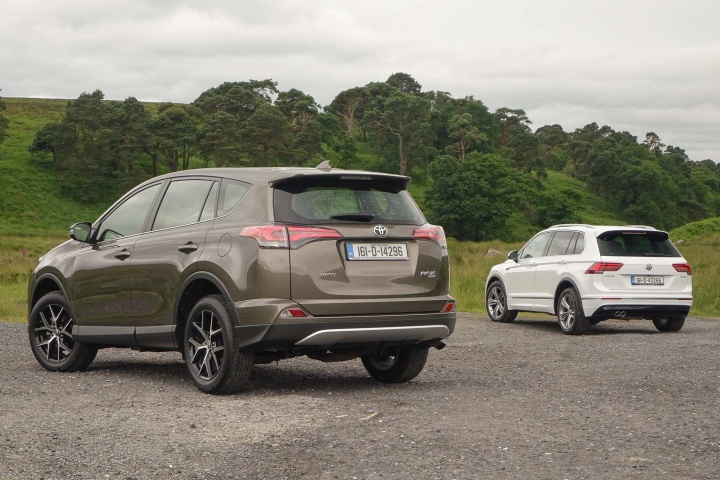 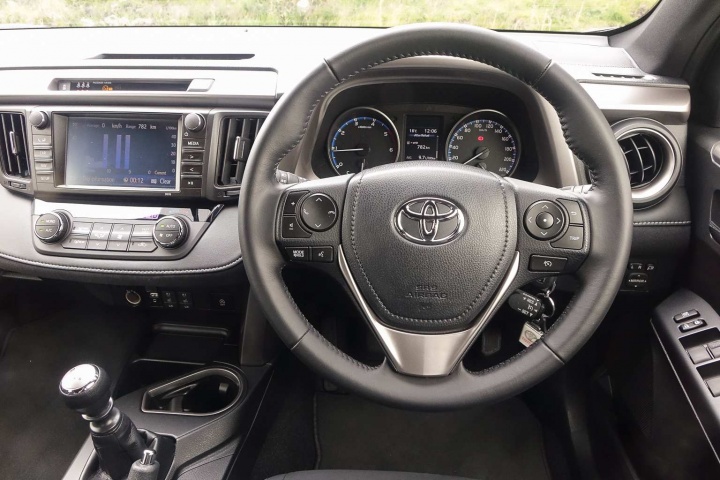 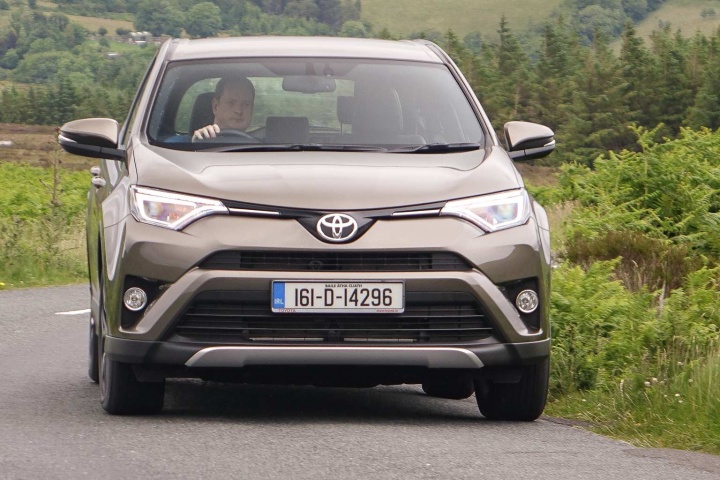 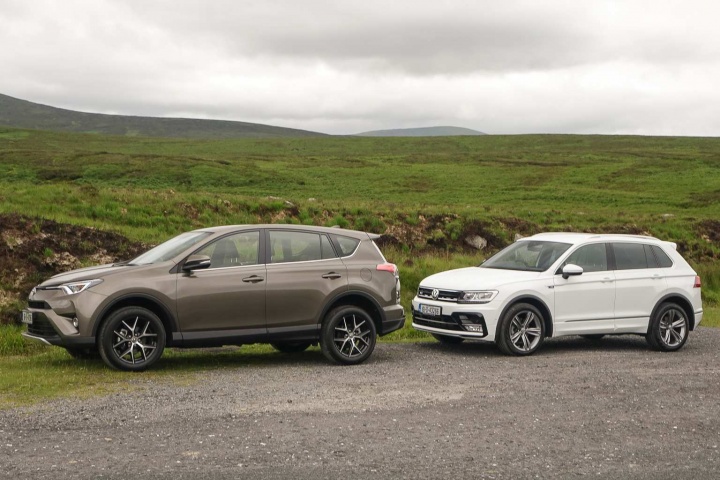 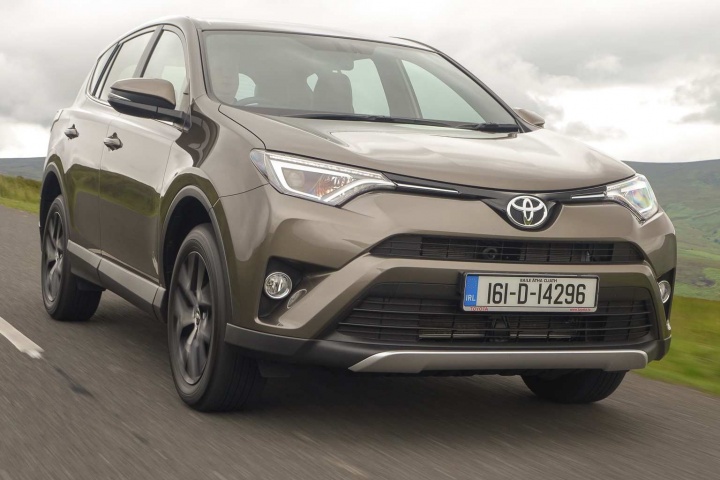 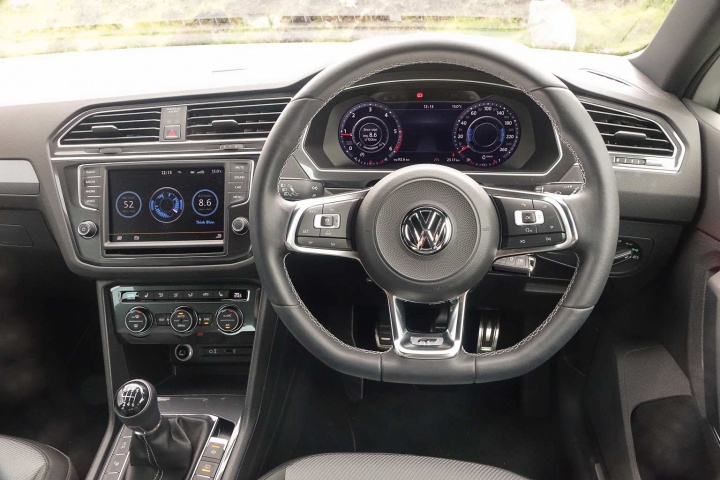 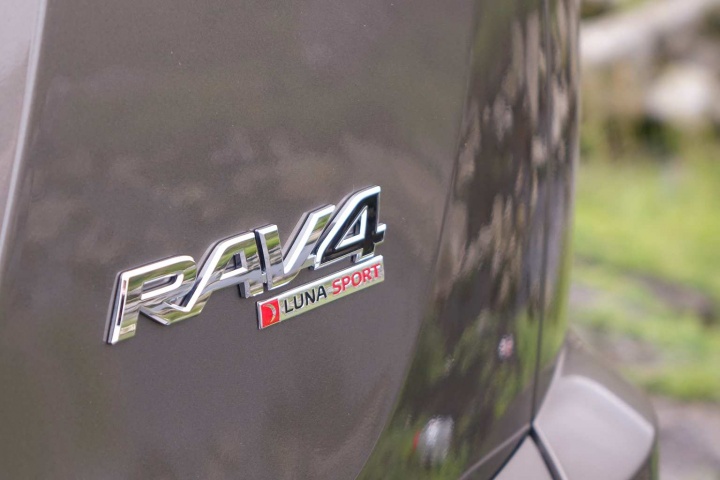 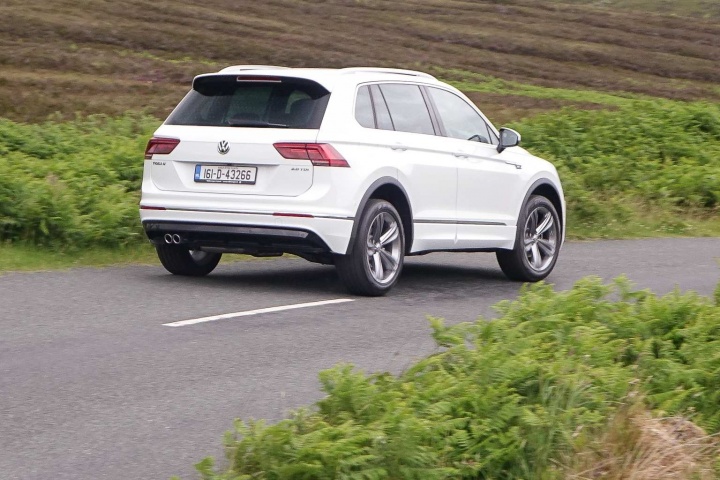 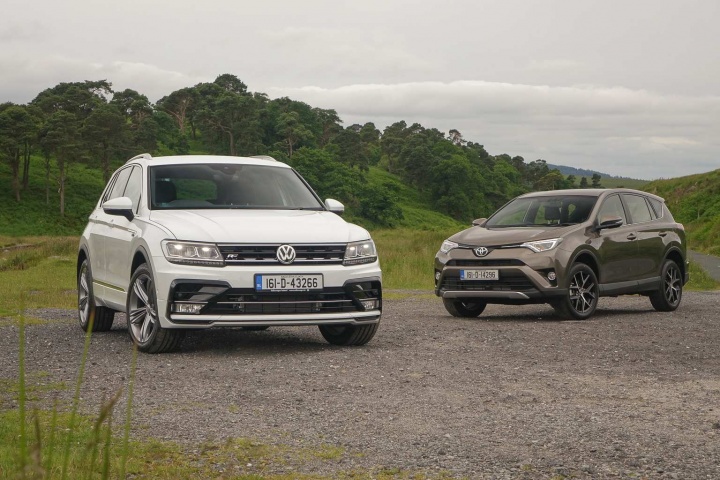 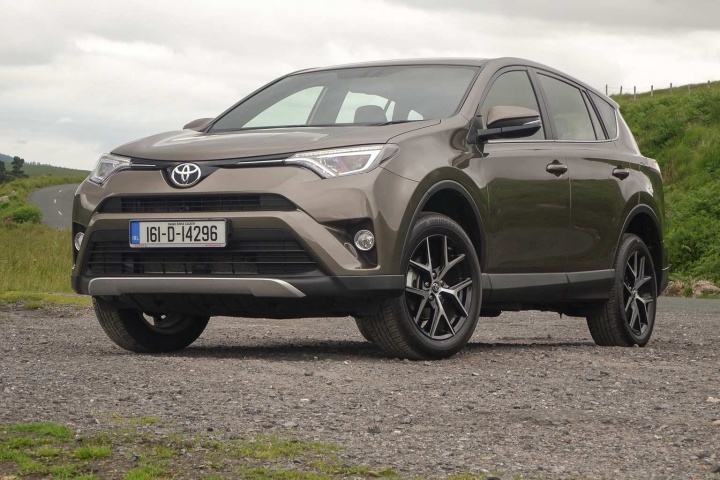 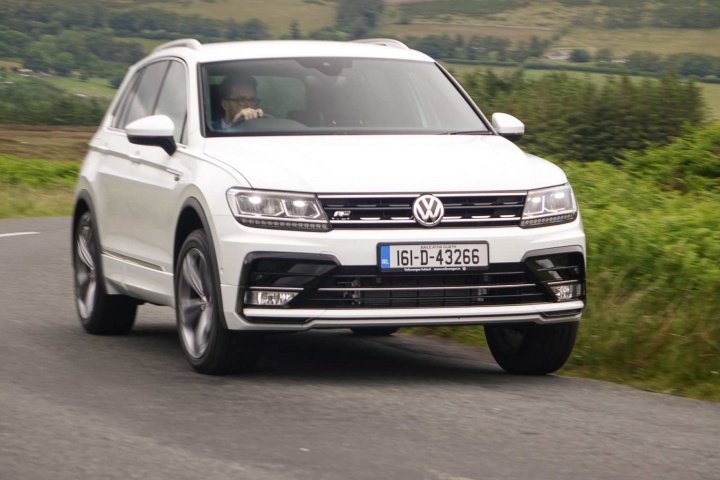 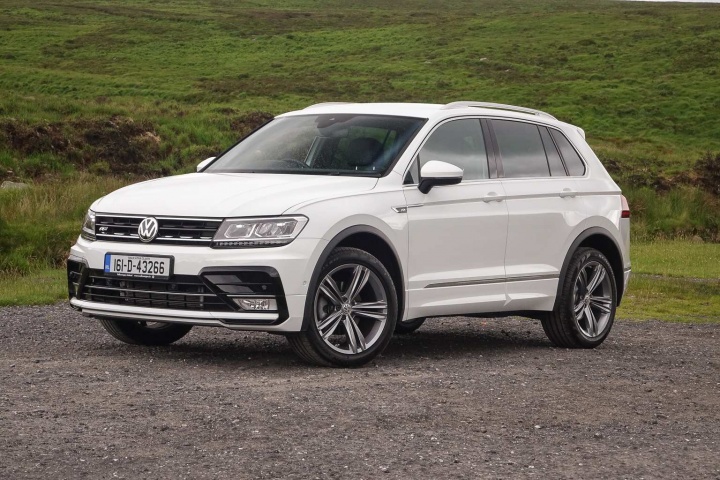 It's the battle of the family crossovers, as the handsome new Volkswagen tries to interlope on the territory currently commanded by the strong-selling Toyota.

The recent facelift for the Toyota RAV4 made it look much more interesting than its predecessor, and in some ways it's a very striking SUV. Those slim, angled headlamps, the sharp creases in the bodywork and the jutting lower jaw of the nose should give it an edge over the relatively conventional looking Volkswagen.

And yet, they don't. Partially, this is down to colour. In bright metallic blue or even white I think the RAV4 would have given a potentially bloody nose to the Tiguan, but in the muddy brown of our test car (and we have to test the car in front of us...) it just starts to look too messy, too over-designed. Up close, you can appreciate the fine detailing, but step back and it loses its sparkle.

The Volkswagen is almost the opposite. Look closely and it can seem a little generic, especially around the back where some of the detailing looks a little too close to that of a Skoda Superb for comfort. But step back, and take in the body as a whole, and the overriding impression is one of sheer class. It helps that our test car was wearing the subtly pumped-up body kit of an R-Line version (more on the price of which later), but even in plain white paint, which tends to disguise some of the styling, it just looks very desirable.

That goes double inside, and again here we have an initial strong run from Toyota before the Volkswagen stomps off into the sunset - albeit only if we're talking about aesthetics. The RAV4's cabin looks neat and purposeful, with big clear dials, a nice central touch screen that juts out from the dash in a big curve and comfortable, supportive seats. It all looks very pleasant indeed.

But glance inside the Volkswagen and it could have come from a different planet, a planet where everyone buys premium. Where the Toyota's cabin feels solid and sensible, the Volkswagen's interior looks positively lavish. Part of that is down to specification - the high spec of our test car included a big central touch screen and the gorgeous all-digital instrument pack, which lifts the cabin like nothing else and makes the Tiguan feel part family car, part Starship Enterprise, but even so its fundamental layout and the quality of the materials used is a step ahead of the Toyota.

Where the Toyota grabs the Volkswagen's collar and hauls it back is in the practicality stakes. The rear seat of the RAV feels noticeably roomier, especially in the legroom department (the middle passenger doesn't even have to contend with a raised floor section), although the Volkswagen fights back with a rear seat that's broader, so may be better at accommodating child car seats. Basically, if you're carrying adults or teenagers in the back, get the Toyota, but if it's small kids you're hauling, get the Volkswagen. The RAV4 is the clear winner when it comes to boot space though - 547 litres (seats up) against the Volkswagen's 520 litres.

The Volkswagen wins the engine race, right enough. Its 150hp 2.0-litre TDI diesel engine is 5hp up on the Toyota's 2.0-litre D-4D unit, and it's far more refined too. While the Toyota's engine is smooth enough, the Volkswagen's is positively silent when you've given it a chance to warm through. The RAV4 never quite shakes off a faint diesel clatter.

Both engines are enjoyably punchy, however, and can pull along strongly even in long-geared sixth gears. Both post an identical 4.7 litres per 100km on the combined fuel economy cycle and both will likely easily do around the 50mpg mark in daily driving if driven gently. Both are in Band B1 for tax, so will cost you an identical €270 a year for a disc.

Where this gets really interesting is in the chassis department. The Volkswagen feels smooth. In spite of being the sporty model in the Tiguan line-up, the R-Line effortlessly soaks up lumps and ripples and its steering feels free from friction, light, accurate and able to easily flick that bluff nose into corners. By and large, it's a class act - far better to drive than most customers will ever care to notice, and exceptionally good at soaking up the worst of Irish roads.

The Toyota initially feels a little bit busier in the suspension department, lacking the Volkswagen's ironing skills and fidgeting somewhat over poor surfaces. But bit by bit, you start to realise that the RAV4 actually has the better chassis. It certainly has more suspension travel than the Tiguan, and when you're pressing on along a really challenging road, it's quickly the Toyota that becomes more confidence inspiring. Its steering is just as light as that of the Tiguan, but it feels fractionally better balanced and delivers a hair's more road feel, so you actually end up enjoying it more. It resists understeer better than the Tiguan (although ultimately both will push stubbornly wide once you approach the limits of grip) and it has better traction too, putting its 320Nm down to the tarmac a little more neatly than the Volkswagen handles its 340Nm.

Ok, so few if any owners of these cars are ever going to take their cars deep into the Wicklow mountains and start pushing the chassis to the brink, but there's no doubt in my mind that the Toyota has the greater depth of reserves when the questions start to become more serious, and the extra confidence it brings when the road gets nasty is quite genuine.

What you get for you Money

With the Tiguan clocking in at €39k and the Toyota at €33,950 this should again be an easy win for the RAV4. Again though, it's not - our test Volkswagen was positively groaning with optional extras, while a €33,750 Comfortline model, likely to be the strongest seller, would put it in better contention with the Toyota. Both come with nice alloys (the Toyota's an inch larger as standard), multi-function steering wheels, touchscreens and split zone climate control. You're not going to feel short-changed by either and both have truly impressive build quality. Mind you, it's worth noting that both cars exhibited faint fizzy rattles in the cabin during our test, which is both surprising and disappointing. Overall, you'd have to say that while Volkswagen makes impressively built cars with strong reliability, the Toyota is likely to edge it in the longevity stakes.

Boy, this is a close one. The Volkswagen really ought to romp home the easy winner. It's so good looking inside and out, so classy both visually and dynamically that the Toyota shouldn't even get a look in. The fact that it does is testament to the RAV4's combination of strong value, quality, practicality and a genuinely talented chassis that really stepped its game up when the going got tough. I think the Tiguan keeps its nose in front in this test, but only by the slimmest of margins and really only because we buy cars with our eyes, not our brains. From a fundamental engineering point of view, the Toyota has the ability to win this test, and very nearly does so.

When we brought these two cars together for the photo shoot and back-to-back testing for a day we realised that there's almost a town-country divide going on. If you live in the countryside and have to deal with bad roads all of the time then the RAV4 is a better bet, but if not, then the Tiguan proves to be more accomplished. The RAV4 has a well-judged chassis that soaks up poor surfaces with aplomb, even if you're in a hurry. The Tiguan isn't far behind, but if feels particularly well tied down when the road is silky smooth. In contrast, the Toyota is less impressive in such (admittedly rare) conditions, with more body roll and less composure.

Nonetheless, that matters little to most buyers of these cars. There's effectively nothing between them in running costs and each has its own merits in practicality terms as Neil has pointed out, though the RAV4 does feel like a larger and more substantial vehicle. It's not as polished a car, however, where the Tiguan sparkles with seemingly endless development and refinement. For that reason, and perhaps a little influence from the Tiguan R-Line appearance, I too would opt for the Volkswagen if spending my own money.