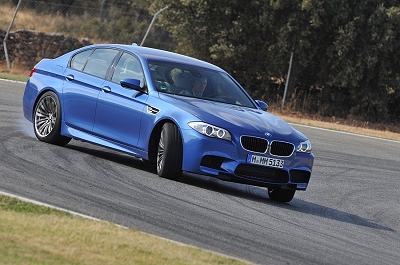 Hopefully you've already seen our first drive of the BMW M5? There's no debate; it's a five-star car. Paddy actually wanted to award it six out of five... Anyway, following the publication of the first drive we got to bring the car to the Ascari Race Resort in Spain to see what it could do at and beyond the limits. I know it's pretty irrelevant given that few buyers of this €132,000 saloon are ever going to dare take it on a circuit, but it does help understand the car's on-the-limit behaviour. Oh, and of course it gives us a chance to be hooligans for a few hours. All in the interests of research you understand.

As mentioned in the write-up, there's a vast array of driving options to choose from. On a smooth track like Ascari it makes sense to go for the most hard-core settings, so that means switching the power steering, throttle map and damping to Sport Plus, upping the transmission gear-change speed to maximum and then having a little word with yourself about the DSC (Dynamic Stability Control).

Let's not forget that the new M5 has 560hp, along with 680Nm of torque produced all the way from 1,500- to 5,750rpm. And an M Differential that can vary lock-up across the back axle from 0-100%. Needless to say it makes sense for most road driving to either leave DSC fully on or go for the halfway 'MDM' setting. During the familiarisation laps in Ascari I did the latter, but with so much room to play it felt too restrictive. We weren't aiming for lap records after all.

The result is clear to see. It's VERY easy to light up the rear tyres. These shots were taken from a couple of the slower speed corners under provocation, but even on the higher speed stuff the rear was all too easy to coax out into a delicious, controllable slide. It's the kind of thing that may not be particularly visible to a bystander, but the angle of the car can be altered minutely with your right foot on the accelerator. It's massively rewarding.

Hooliganism aside, the M5 copes well enough with fast lapping. It's nigh on two tonnes in weight so it was no surprise to feel the tyres going off after a spell of hard driving - that's the front tyres, by the way. However, it does disguise its bulk when it comes to direction changes.

Can't wait to try it out on Irish roads to see how it copes. It's on sale here in December.