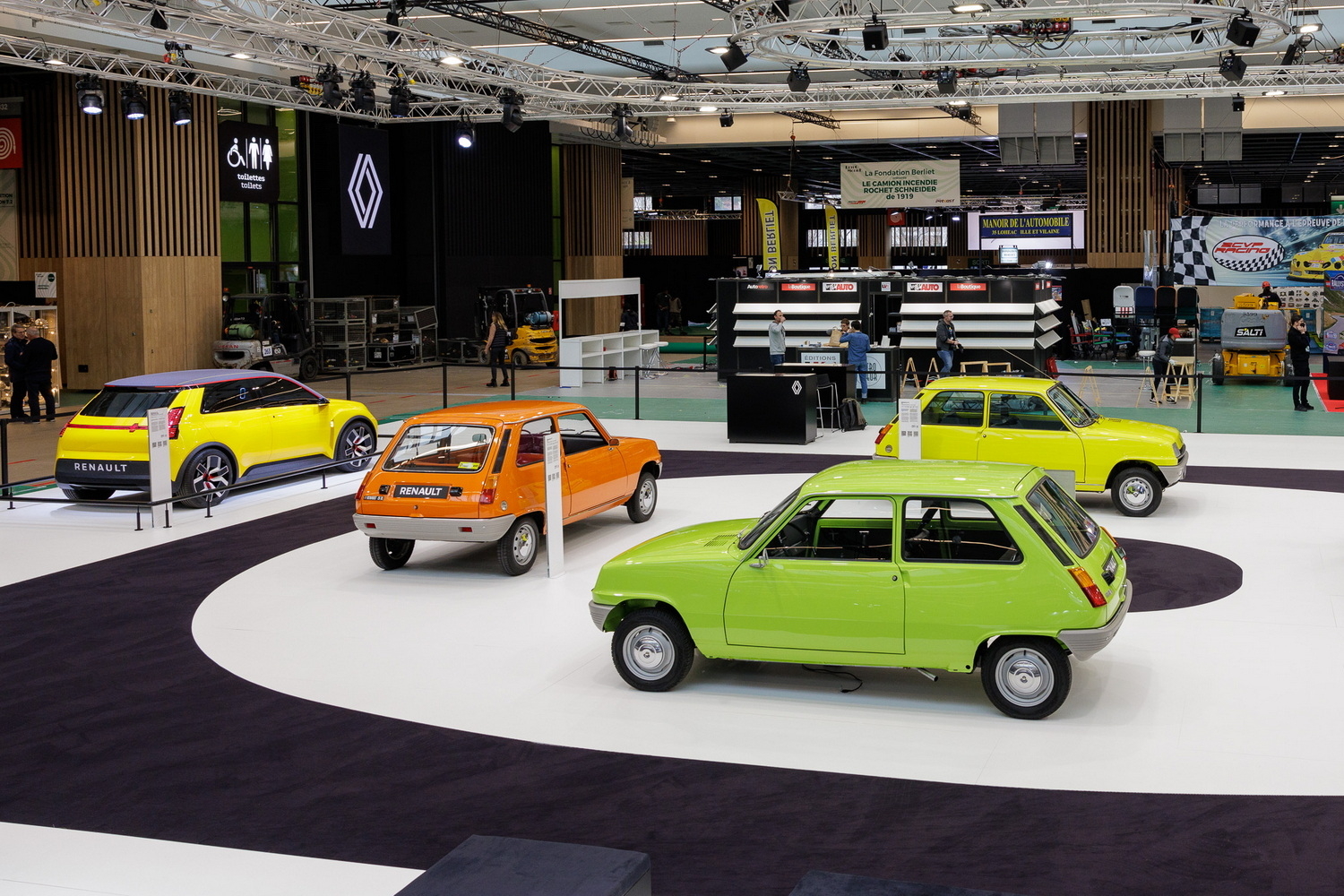 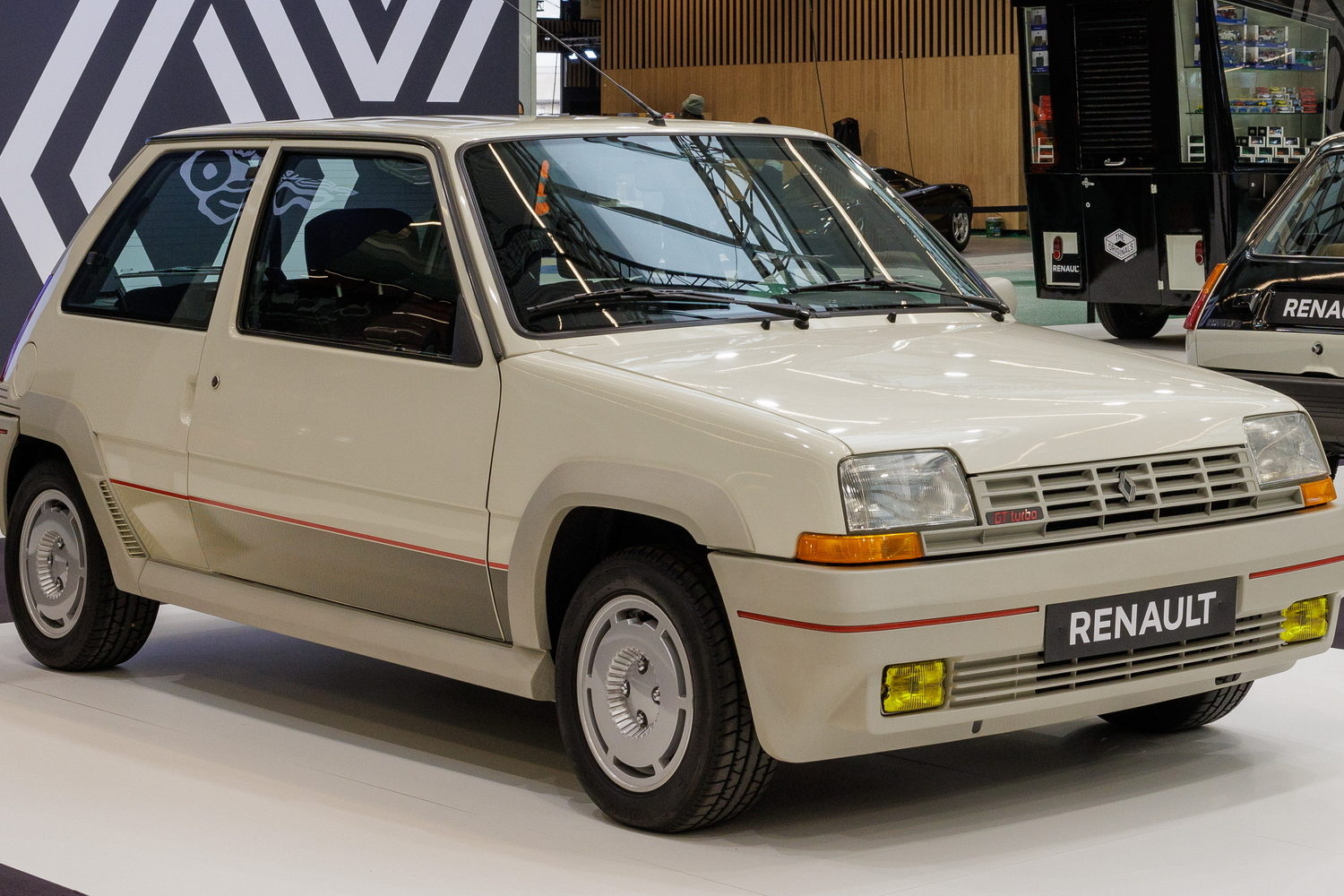 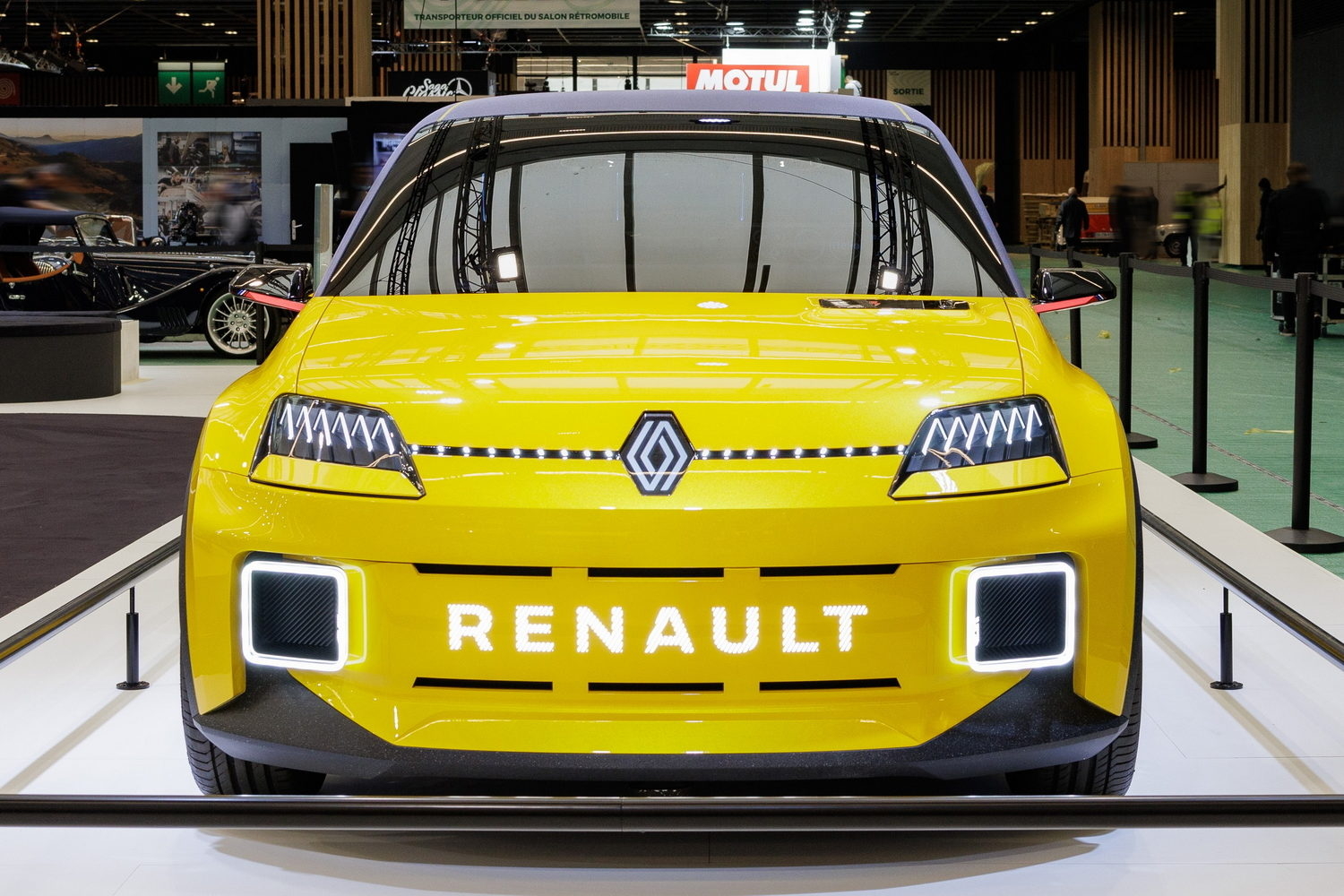 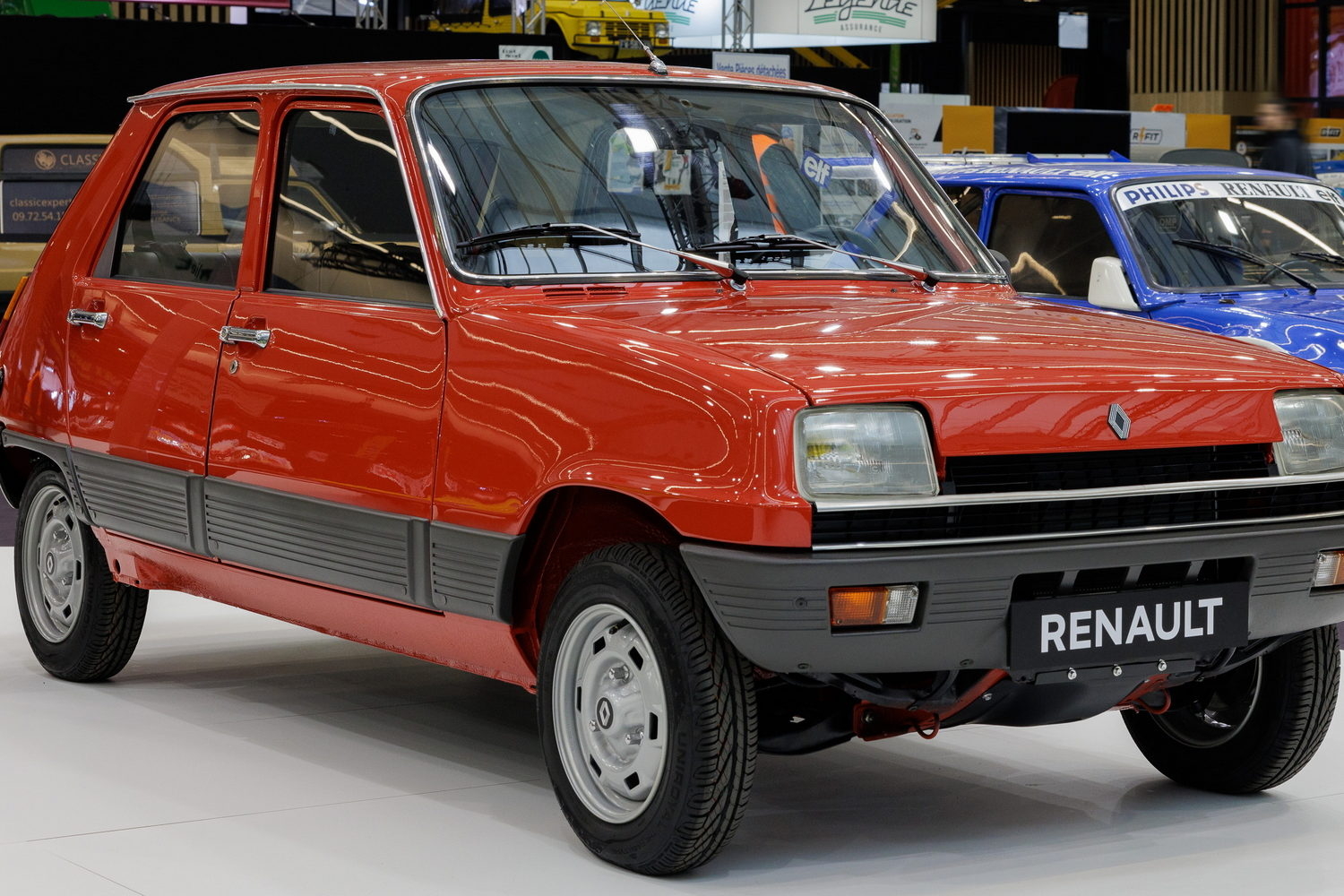 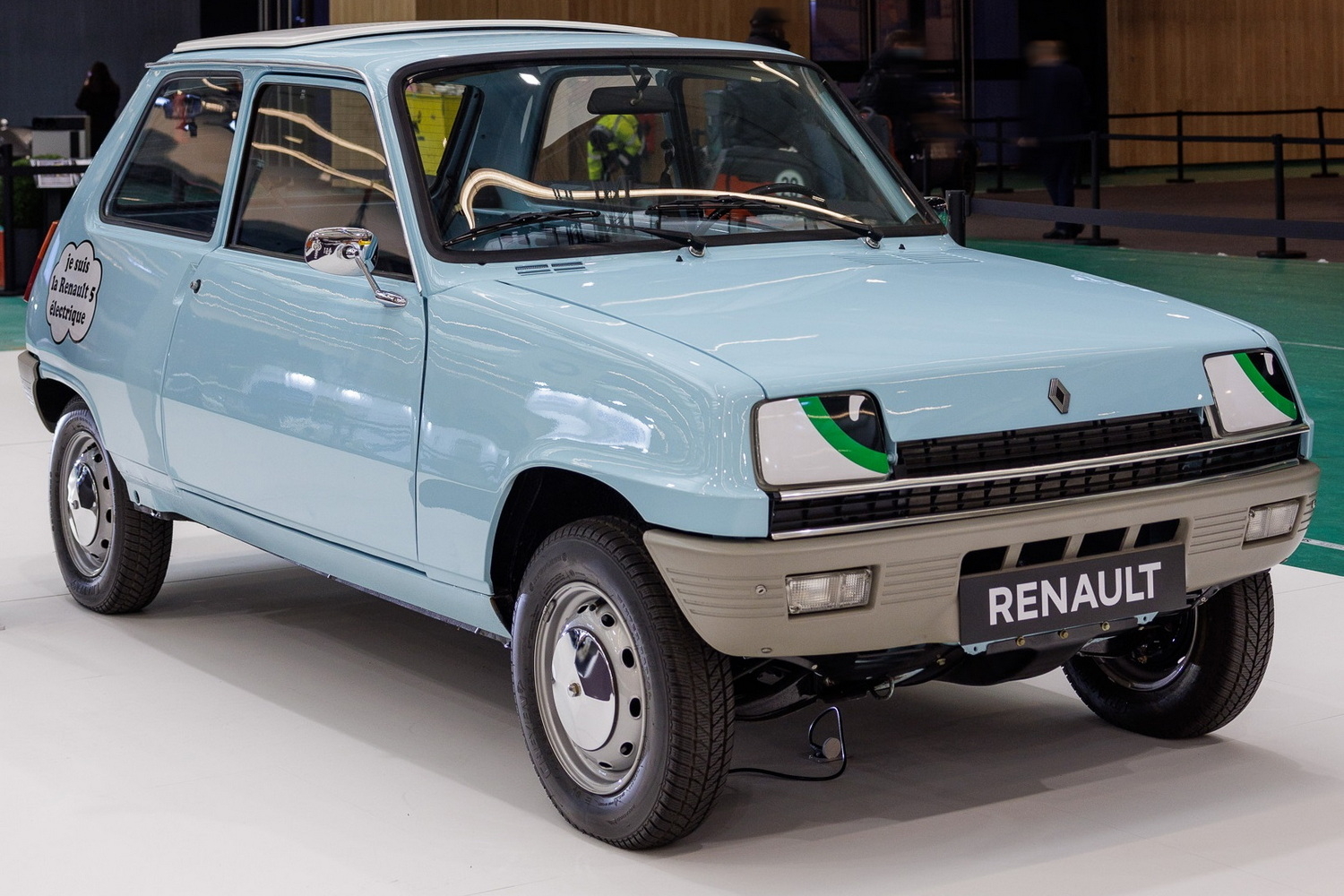 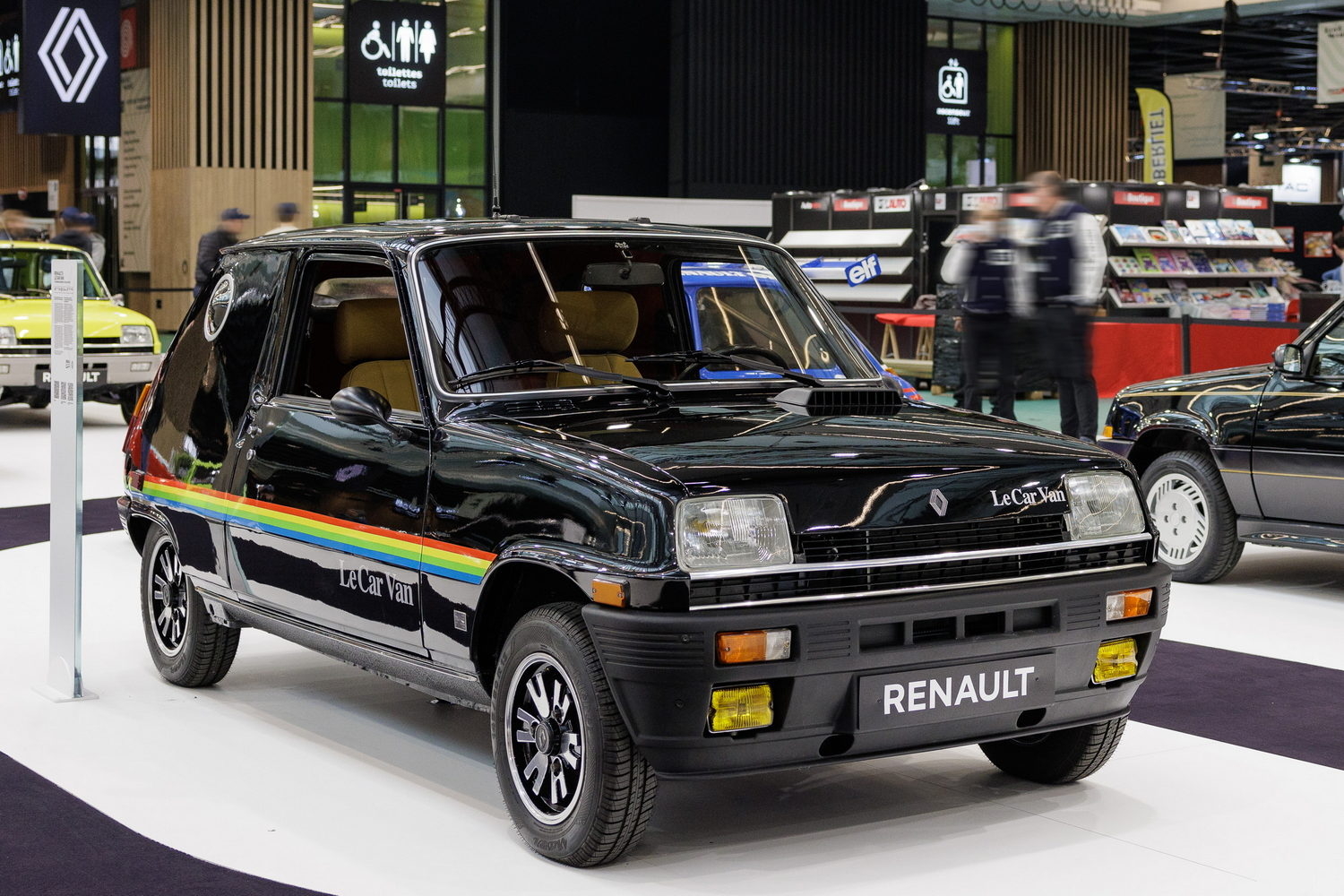 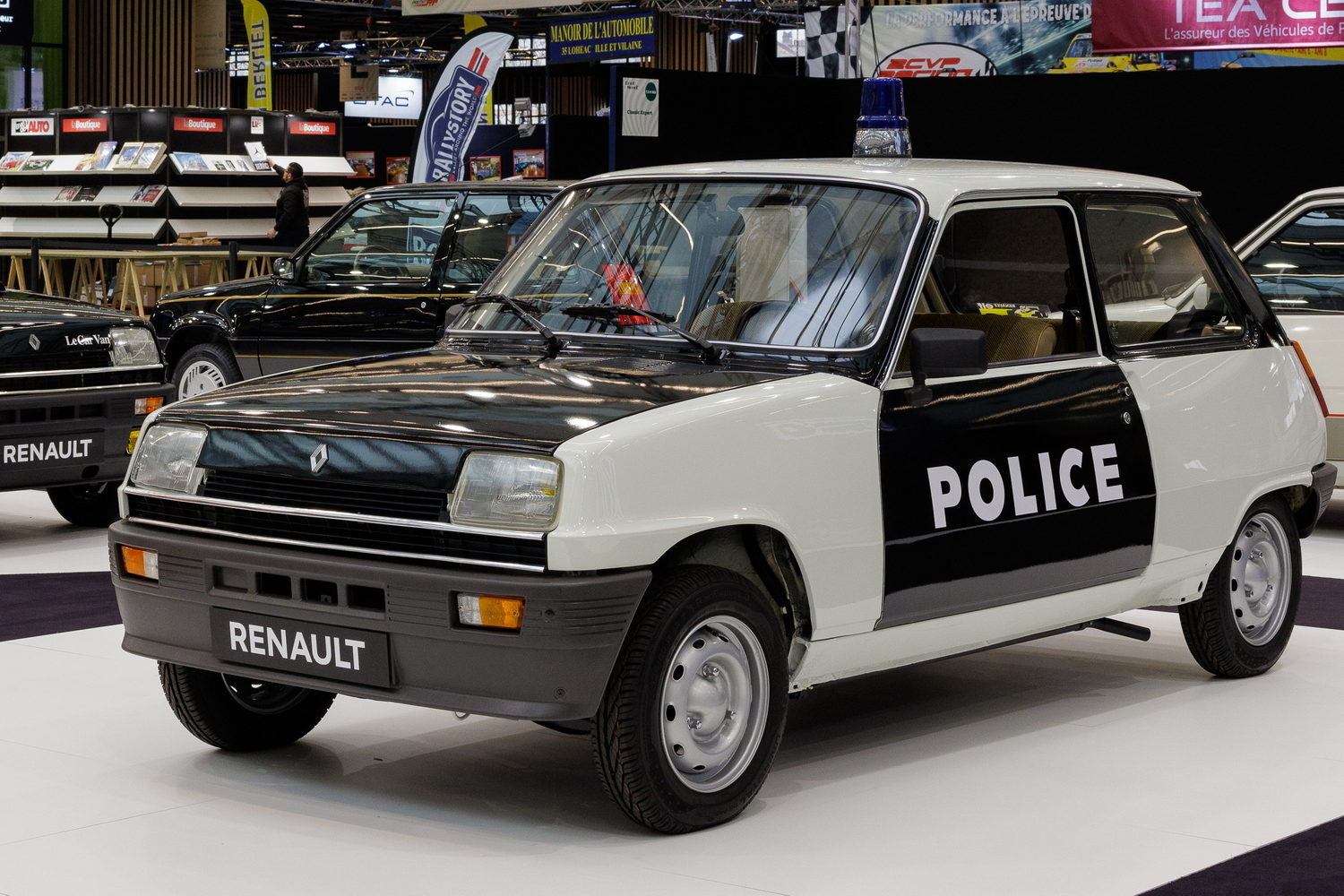 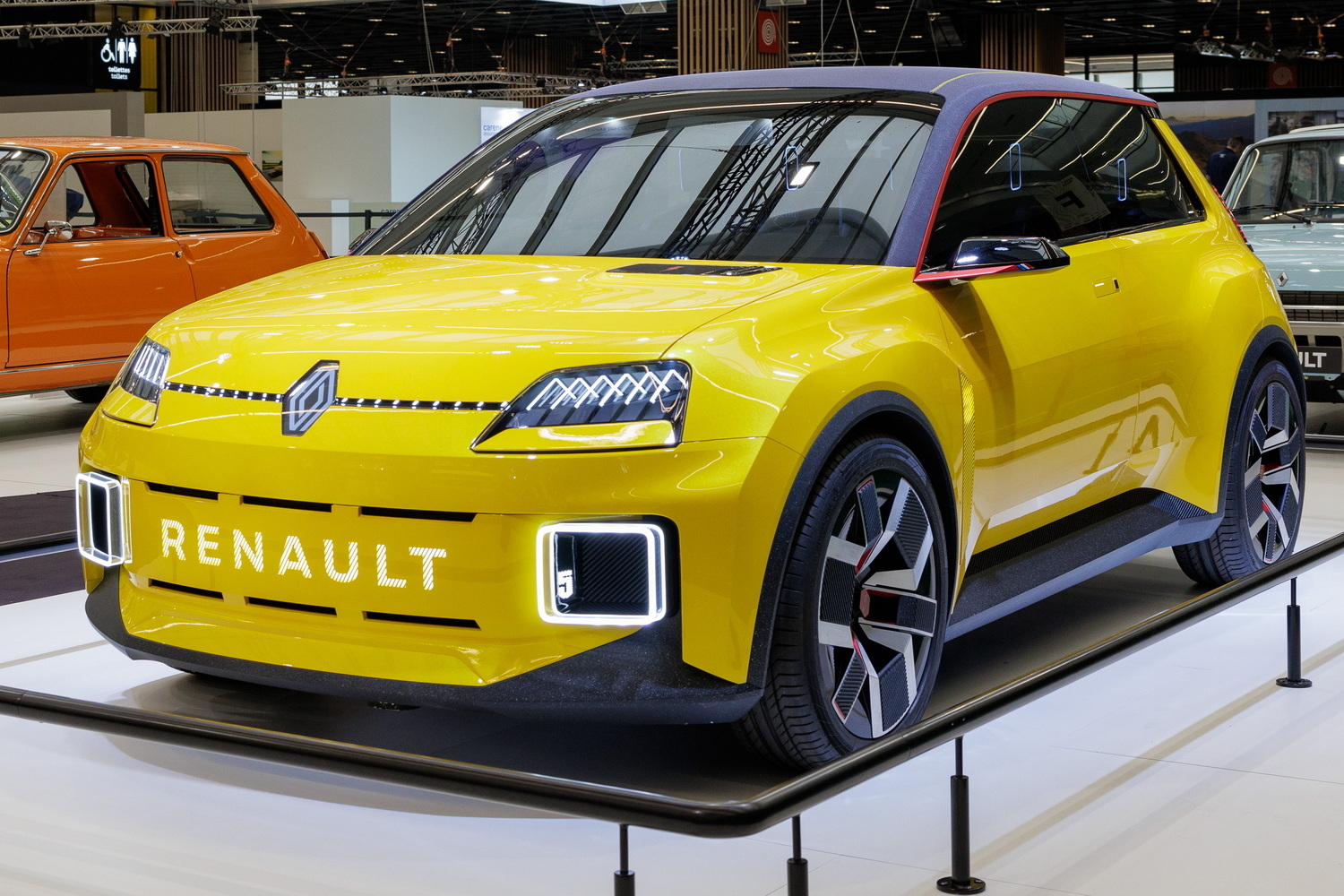 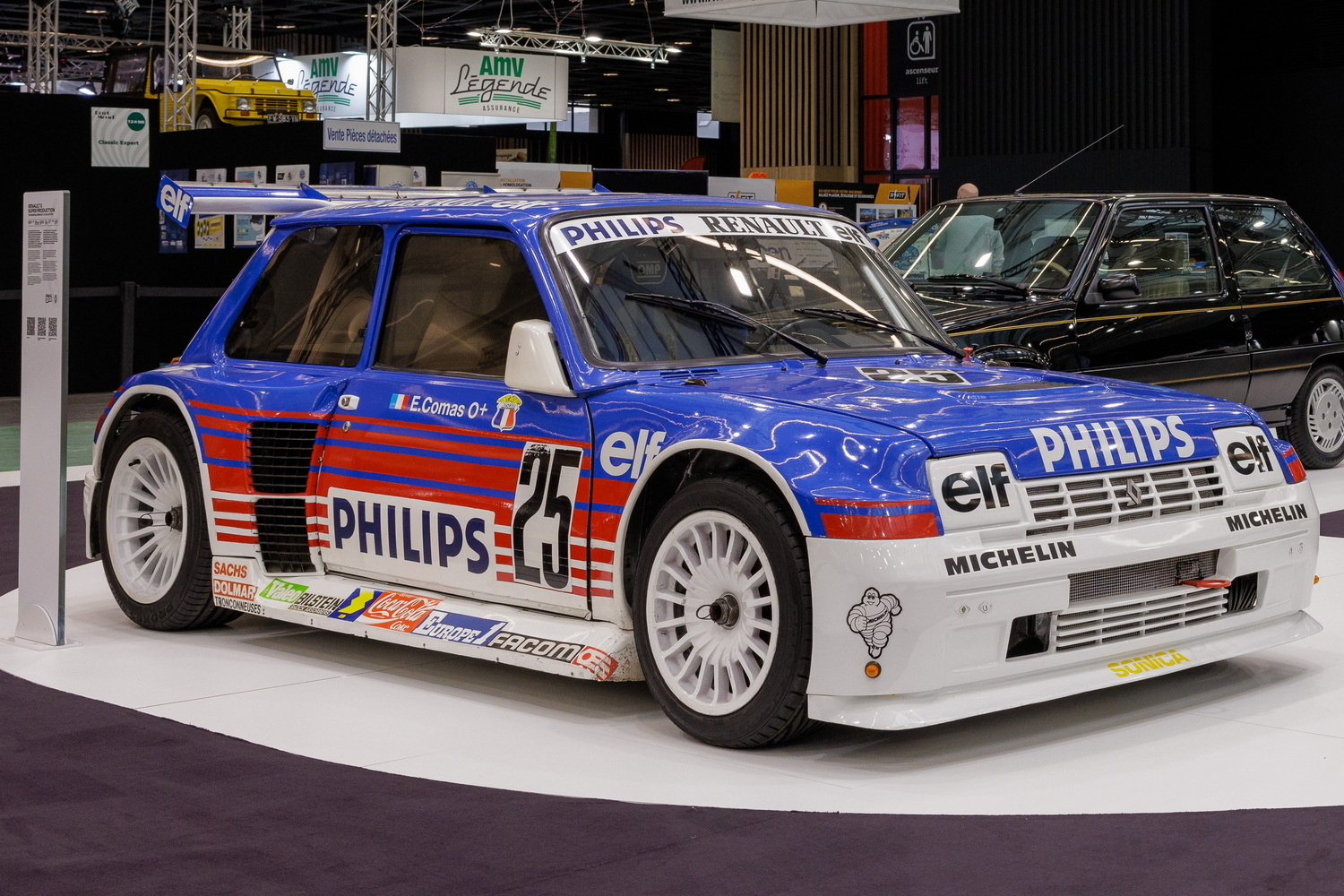 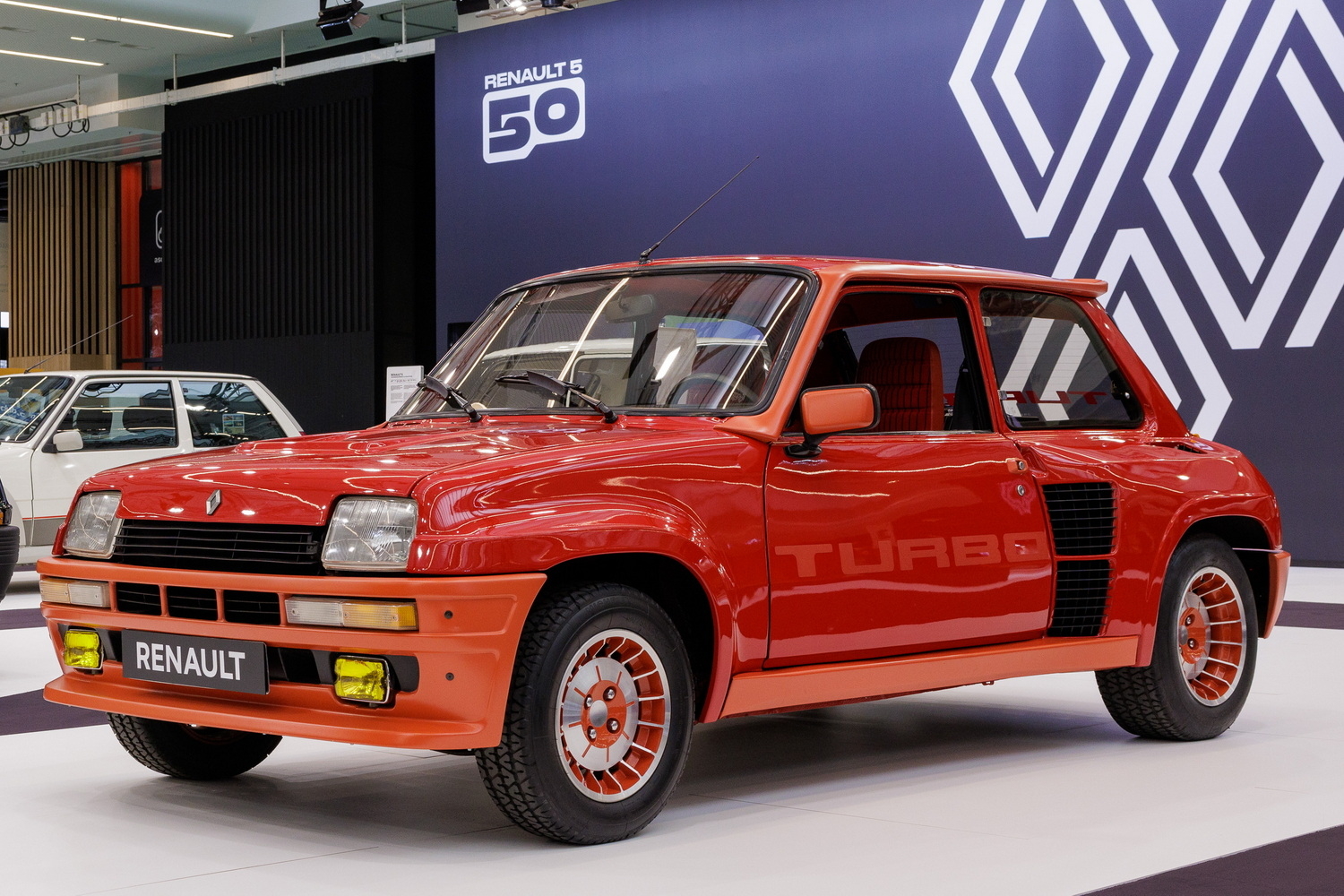 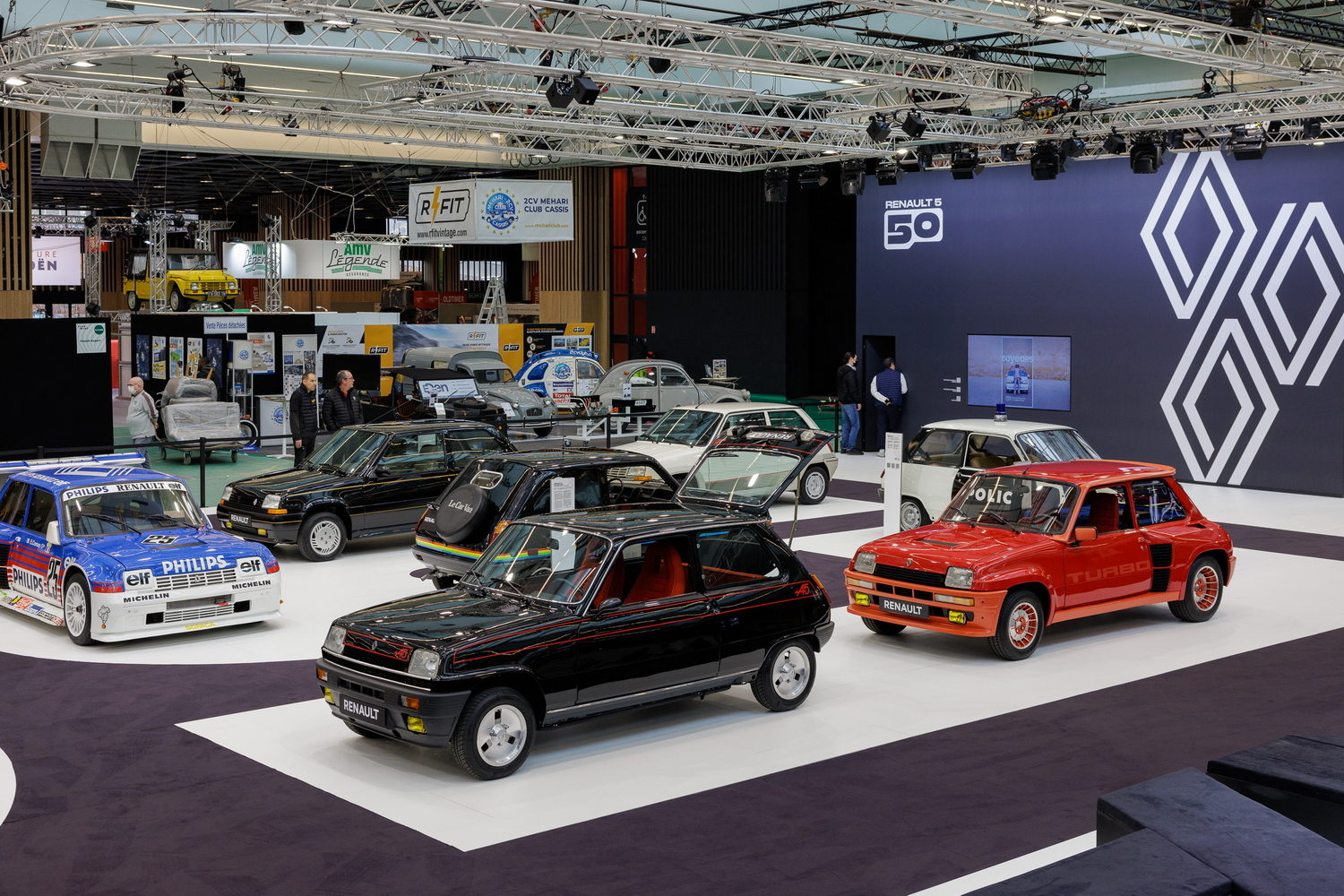 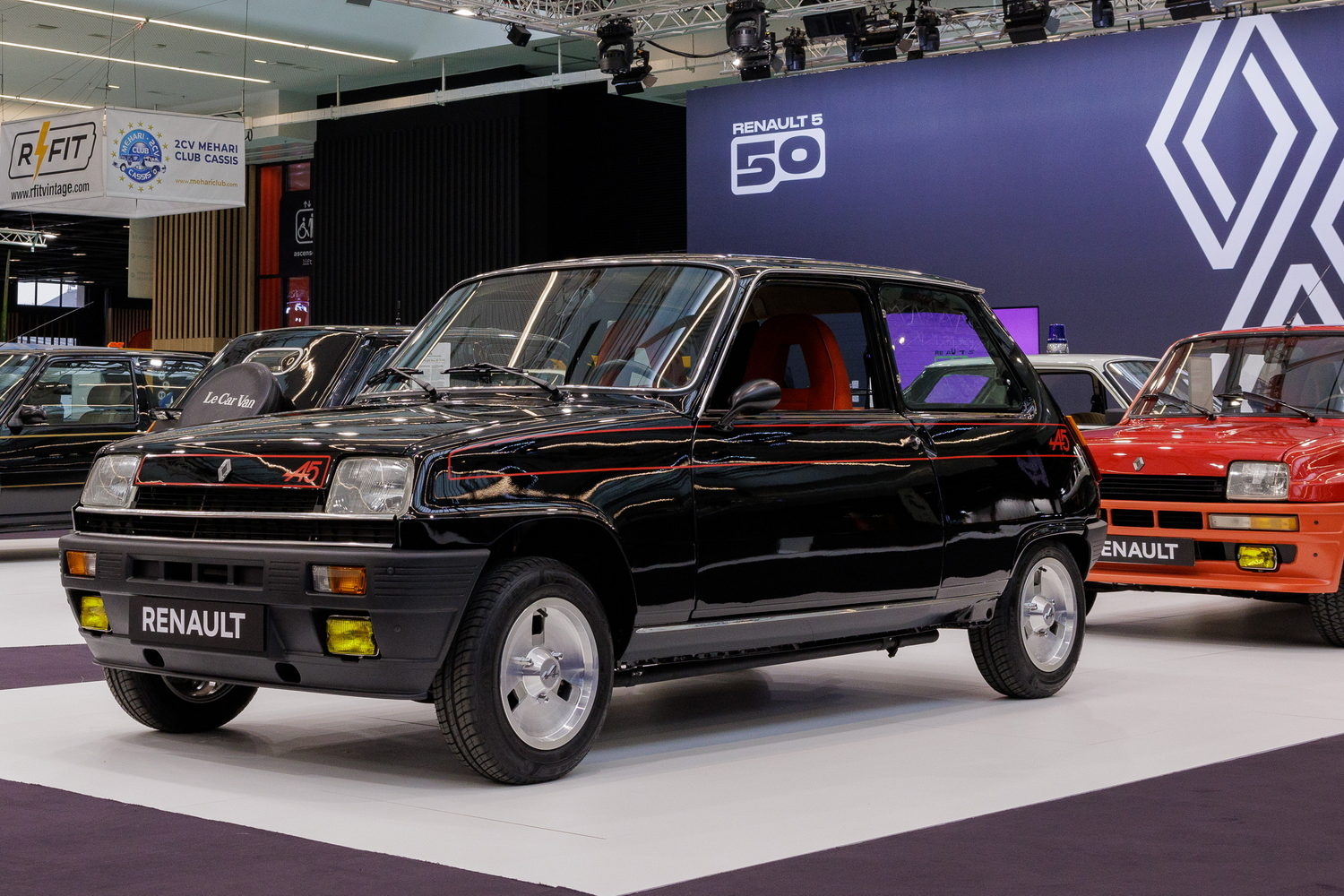 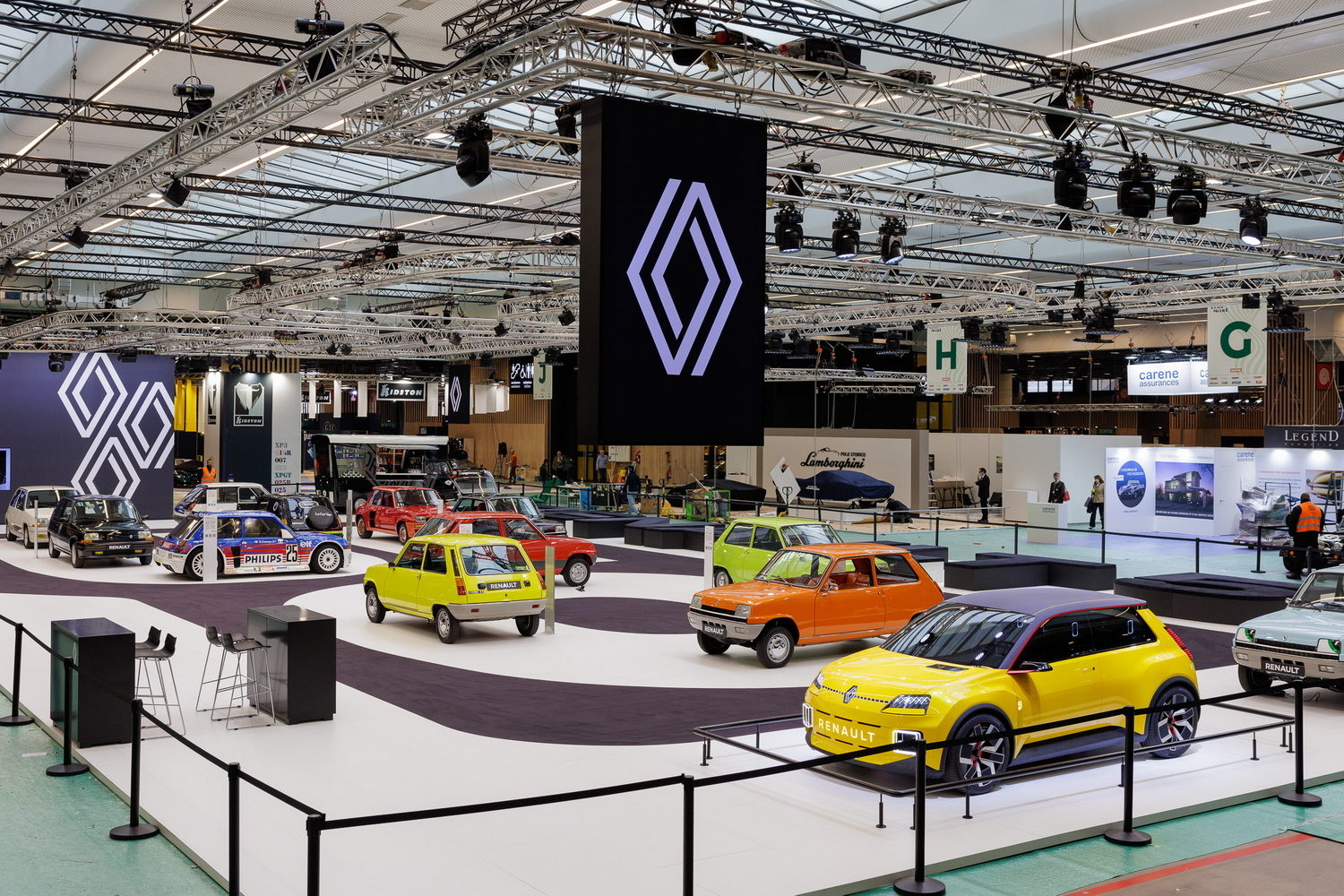 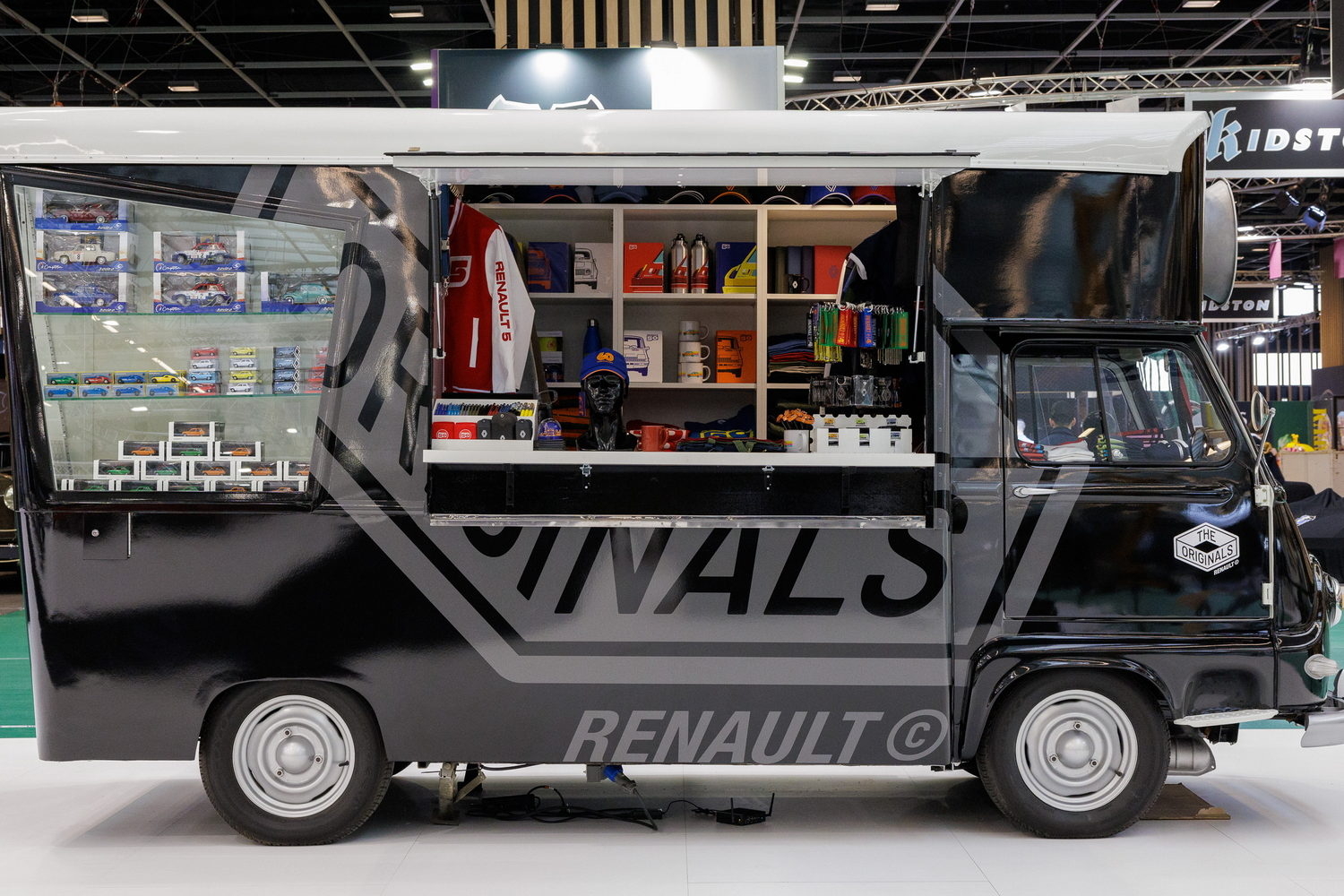 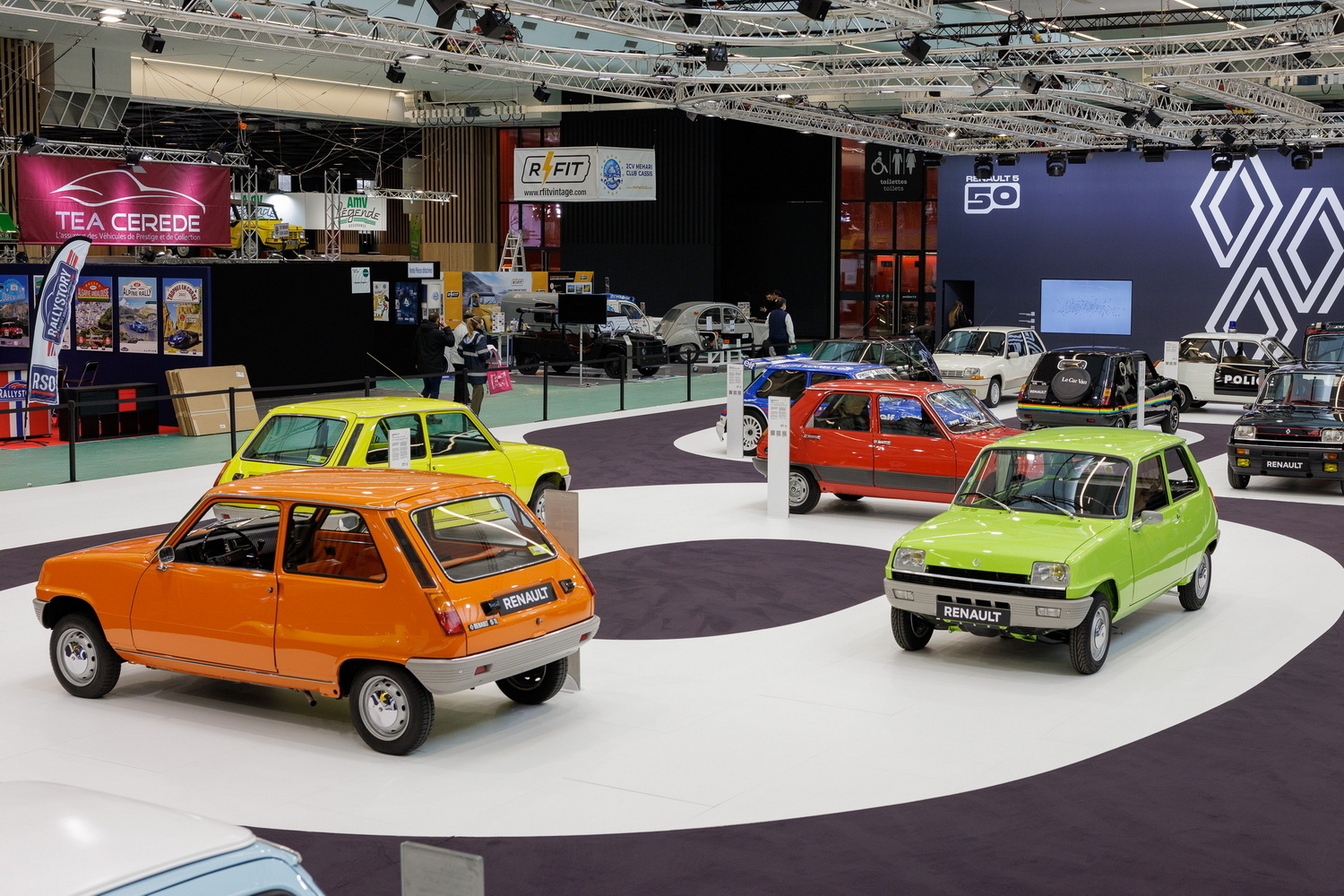 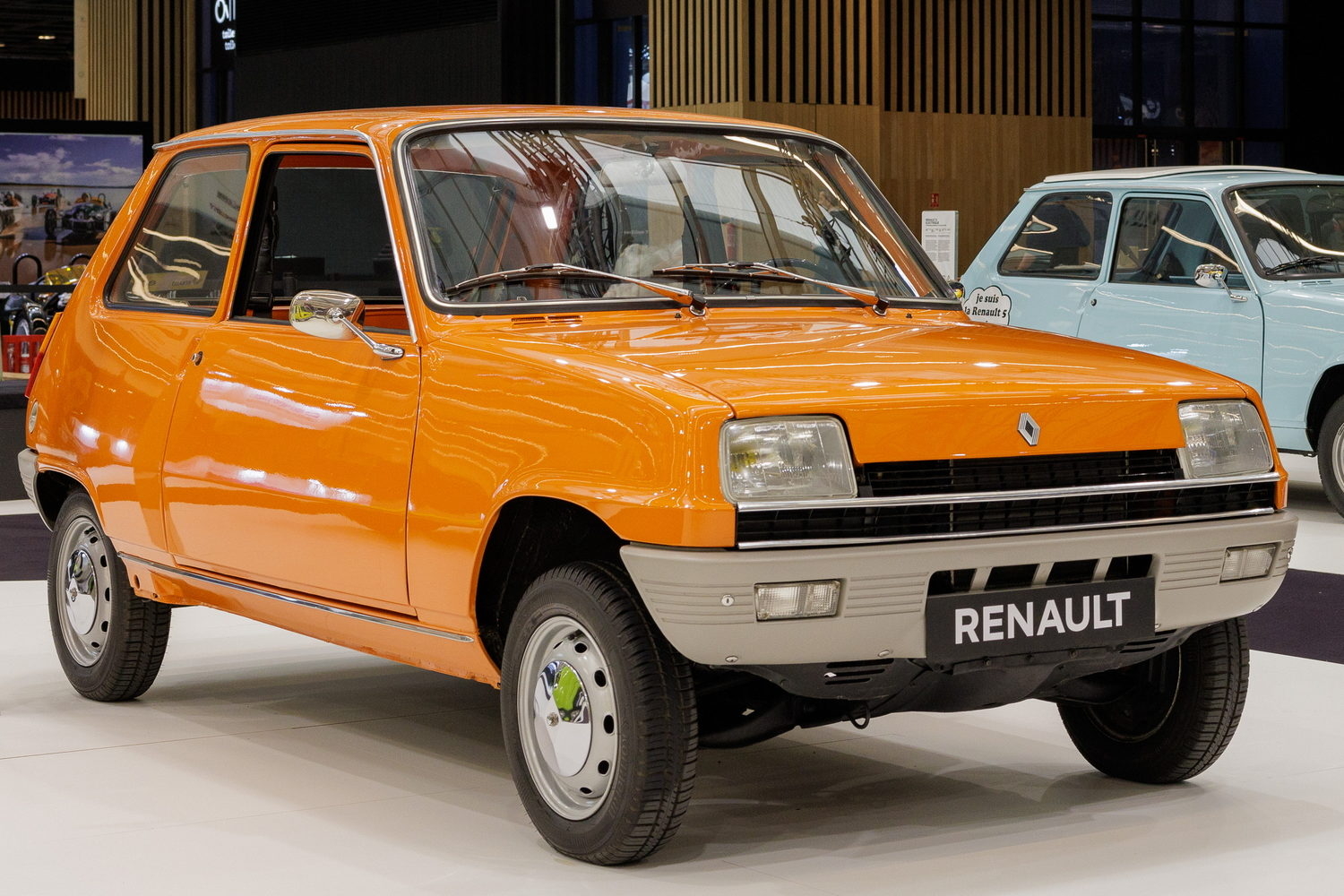 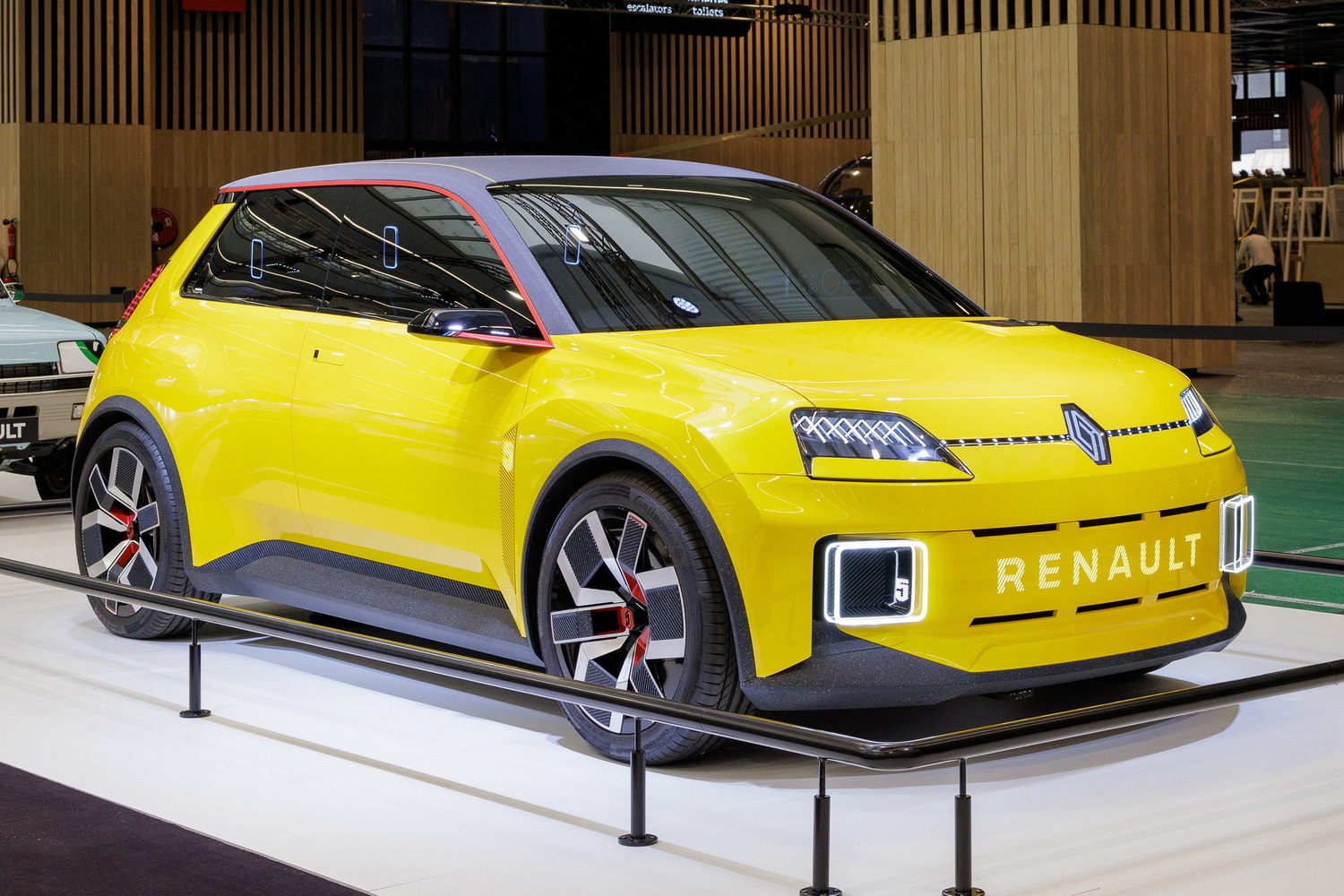 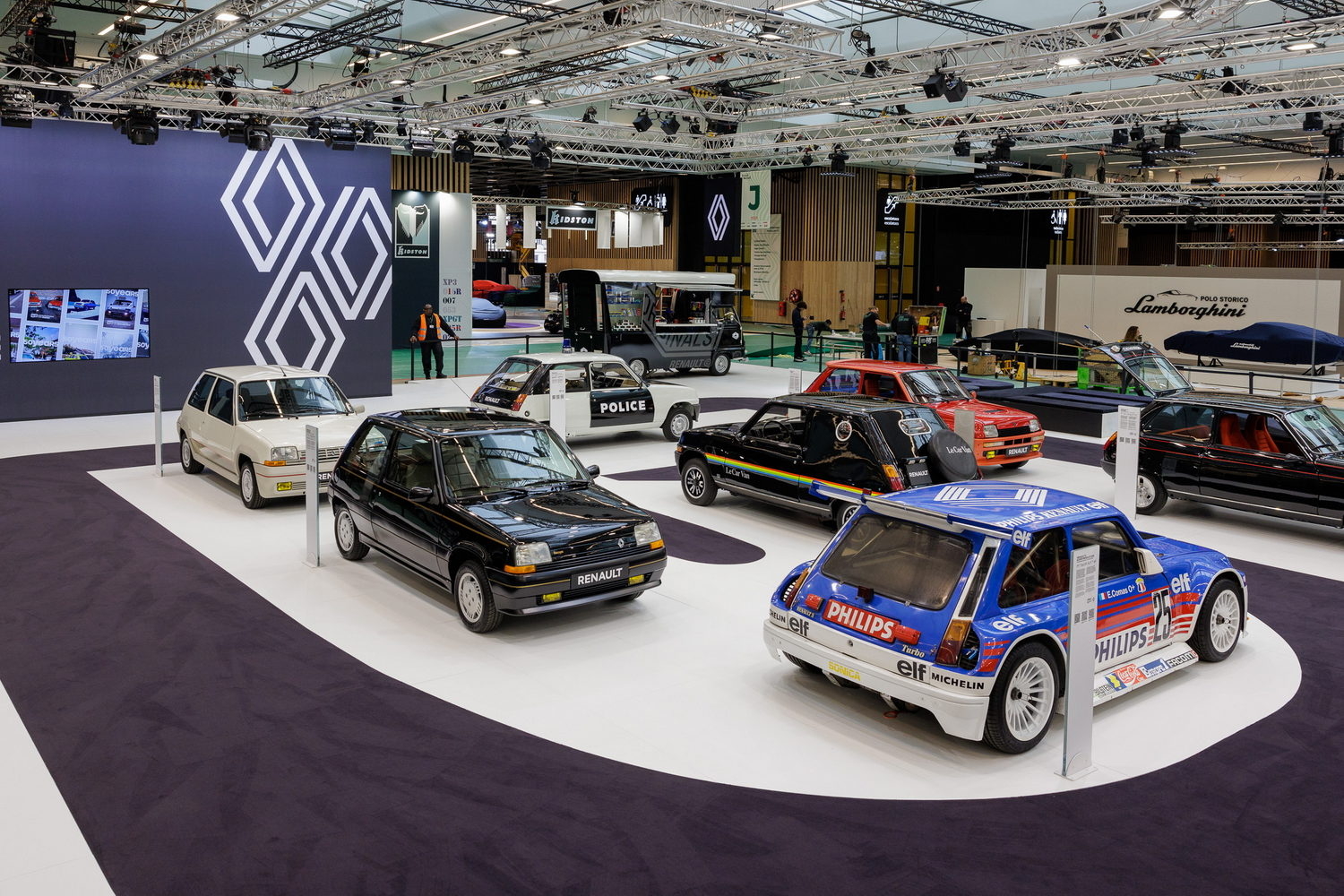 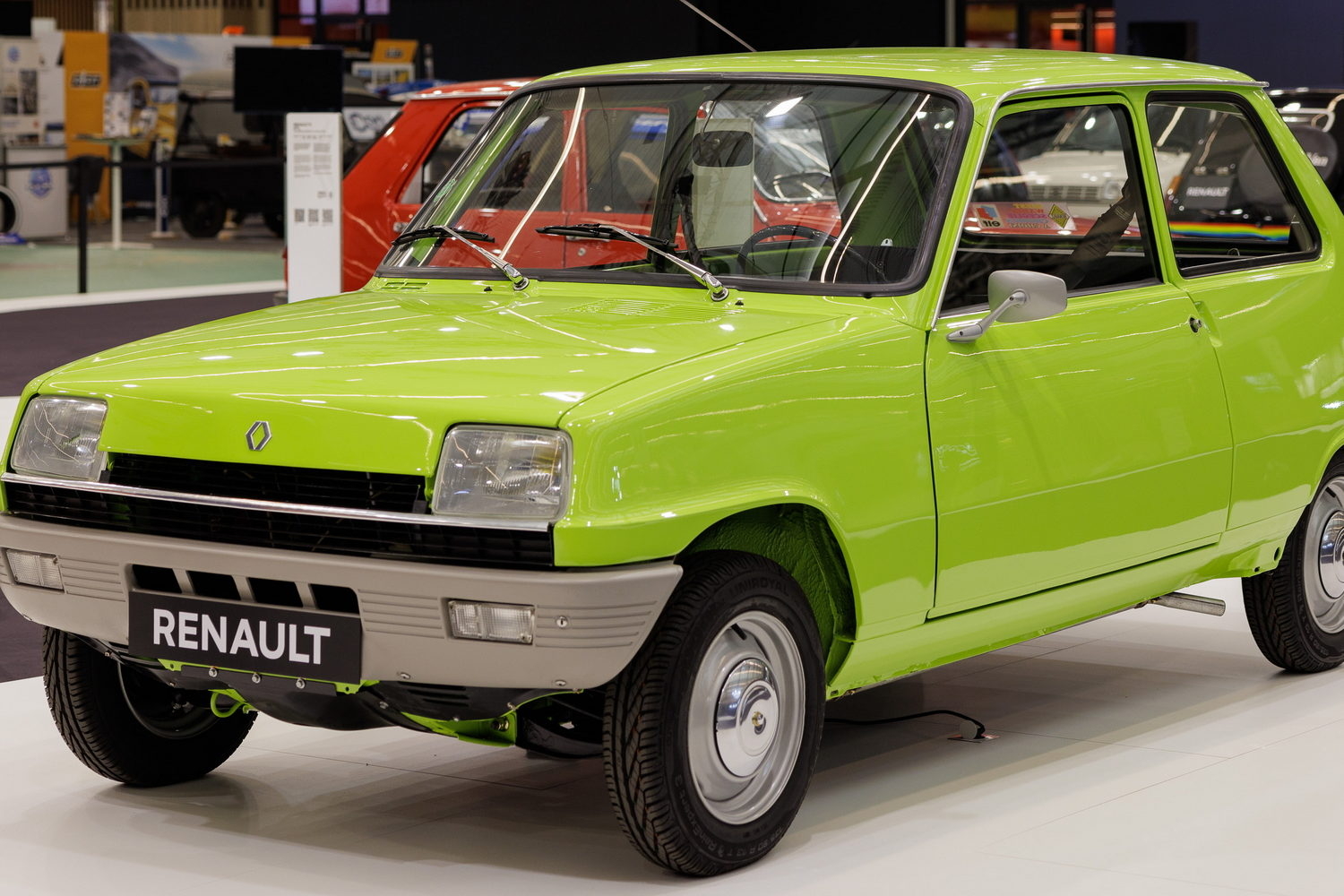 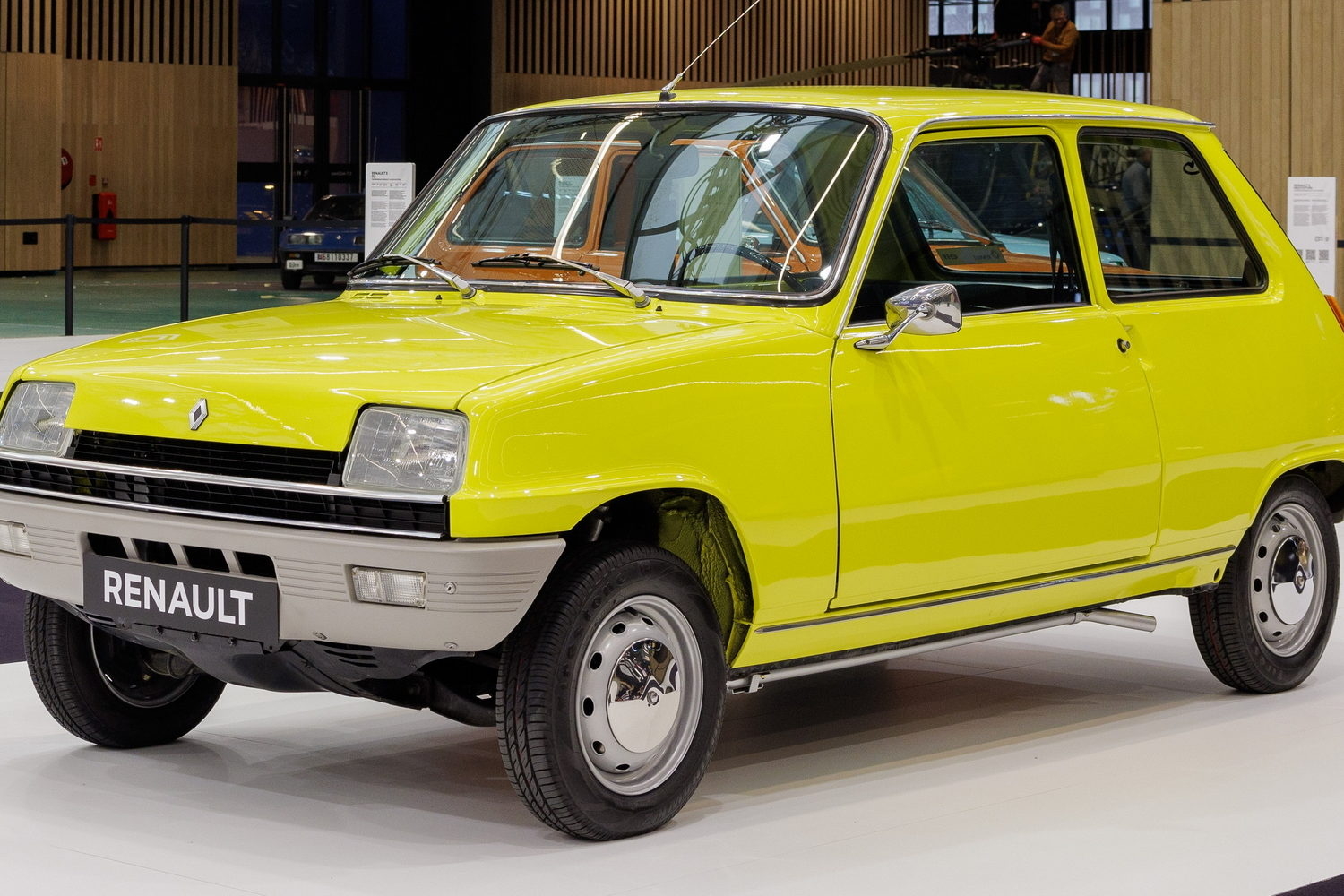 The Renault 5 celebrates its 50th anniversary at Retromobile Auto Show.

Have you ever been to Retromobile? You really ought to go - the Parisian classic car show, held at the Porte de Versailles exhibition centre (take Metro line 12, heading towards Montparnasse and St Lazare) positively heaves with a glorious concoction of familiar favourites and wild flights of automotive fancy. It's hugely well worth a visit.

Especially this year if you're a fan of the Renault 5. And, let's face it, who isn't? The cheeky little Renault hatch effectively set the standard for all compact, front-drive family cars that followed. While the 1959 Mini was revolutionary in its design and packaging, really it was the Renault 5 that actually set the template for all that followed.

That first 5 was launched all the way back in 1972, making this year its 50th birthday. Instead of a cake, Renault gave the 5 an 820-square metre stand at Retromobile this year, celebrating the 'Cinq' in all its varied versions. The Renault booth took visitors on a journey through the history of Renault 5 and give them a glimpse into the brand's future with Renault 5 Prototype. "We are delighted to join with aficionados, fans, journalists, partners, and club members to celebrate the 50th anniversary of the emblematic Renault 5 at Retromobile auto show, one of Europe's most acclaimed classic auto shows", said Hugues Portron, Director of Renault Classic.

It seems astonishing in this era of short-lifespan vehicles, but the 5 stayed in production for a full 18 years - you really could buy one in 1990, even though it had been usurped by the first-generation Clio by then.

Back in 1972, there was little else like the 5. Arguably the first mass-market three-door hatcback, according to Renault it was created not as a mere car to be sold, but in response to vast socio-political shifts taking place at the time. "It was perfectly adapted to the burgeoning expectations of society at large with the emerging middle class, suburbs, supermarkets, and a rise in female emancipation." That might be a Renault official statement on the 5's history, but it reads almost like an essay by Roland Barthes (who, ironically, was killed when he was knocked down in an incident that involved a Renault Fuego, alas).

Renault's idea was both classic and modern - give people a car that could be relatively easily afforded, and was small and easy to drive around town, but which was also roomy and refined enough for longer hauls down the nearest Autoroute should the mood take you. It was a recipe that clearly worked - the 5 was the best-selling car in France from 1974 until 1983. In 1980, it was the second-best-selling car... in the world. Not bad for a car that started life with a titchy 782cc engine. It's something to chew on that when the 5 was upgraded, it was given first an 845cc engine, and latterly a 956cc unit. It seemed plenty at the time, in fairness.

Of course, that was never going to be enough. The 5 was launched at a time when Renault was conquering Le Mans, and was gearing up for a literally-turbocharged assault on Formula One. So, inevitably, the 5 was going to get caught up in that. I just don't think that any of us, at the time, reckoned that would involve an incredibly fast and furious mid-engined rally concoction - The Renault 5 Turbo. Conceived by Jean Terramorsi and designed by Yves Legal, Renault 5 Turbo was made specifically for rally driving; its first model was presented at the Paris auto show in 1978. It was built in Alpine's factory in Dieppe, and originally the plan was just to make 400 to homologate it for rallying - eventually, 4,857 were made and sold. Its turbo engine produced a mere 160hp, but you've got to remember that this was a time when a Golf GTI had 100hp. It was barmy rapid, and if you want to find out just how much fun a 5 Turbo is, click on this link to read Dave Humphrey's test drive of a perfectly-maintained original...

Actually, Dave drove a 1983 Turbo 2, a car that was rallied in anger by greats such as Didier Auriol and Carlos Sainz Snr, but which achieved true artistry in the hands of French ace Jean Ragnotti. Honestly, Ragnotti in a 5 Turbo is just as wild a sight as Mouton in a Quattro or McRae in an Impreza. Needless to say, the Turbo was represented on the Retromobile stand.

That was, of course, a touch predictable. What about something a little more... unusual? Well, OK then. Remember that the 5 was sold, for a time, in the US market, and called 'LeCar'? It met the usual problem of trying to sell small cars in America, which is that Americans are allergic to small cars. Renault, in trying to convince them that the 5/LeCar could be different, decided to convert some into little itty-bitty day vans. Based on Renault 5 TS, it was more of a 2-seater and its rear quarter windows had been replaced by an injected polyester panel with tinted glass porthole and aluminium trim. A spare wheel was anchored to the outside of the car, on its back end. Dressed on a black lacquer finish on the outside and an interior upholstered with a red carpet, it featured rainbow-coloured stripes and bold inscriptions along the base of the body and the bonnet. Astonishingly, 450 of these were made, and there was one on the Retromobile stand.

There were others on the stand too, such as a plain and simple 5 GTL - recognisable by its protective plastic side guards that extend through to the bumper - which became the best-selling version of this best-seller, and a Supercinq Baccara, which came with leather seats and steering wheel, twine-coloured interior, black leather gear knob, thick carpet on the floor of the passenger compartment and throughout the boot, electric windows, and the famous garment cover attached under the rear shelf. There was also a Supercinq GT Turbo, the mildly-less lairy, front-wheel drive brother to the mad mid-engined Turbo, and a heck of a hot hatch in its own right.

Perhaps more importantly, two electric Renault 5s were on the Retromobile stand. One was made in 1972, helped by French electricity supplier EDF. Only around 113 electric 5s were made, and they had a range of just 60km. And only two seats.

That can be perhaps excused as a minor curiosity, but the other electric 5 on the stand is of rather more import. It's the future - the concept version of a production revival of the 5, due on sale in 2024, and coming only with electric power. Quite apart from the utterly gorgeous exterior design - which lifts more styling cues from the squarer, second-generation 5 than the softly curved 1972 original - the new electric 5 will have a one-charge range of 400km (or thereabouts) and cutting edge tech on the inside. If the early word coming from within Renault is to be believed, it will also be very affordable, possibly even more so than the current Renault Zoe, which it will essentially replace.

It's a new beginning for the Renault 5, 50 years on from the original, and we can't wait to see how the original recipe translates to an electric future.