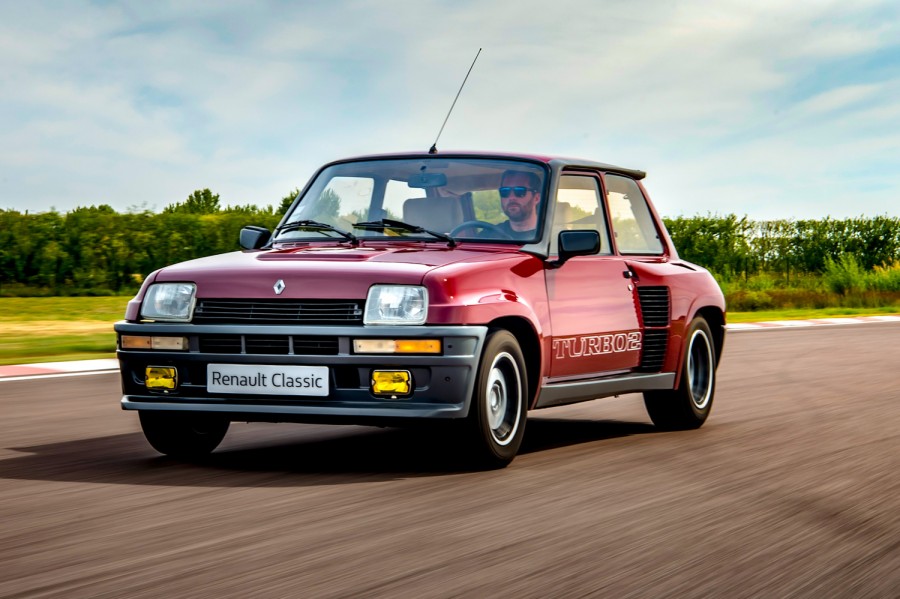 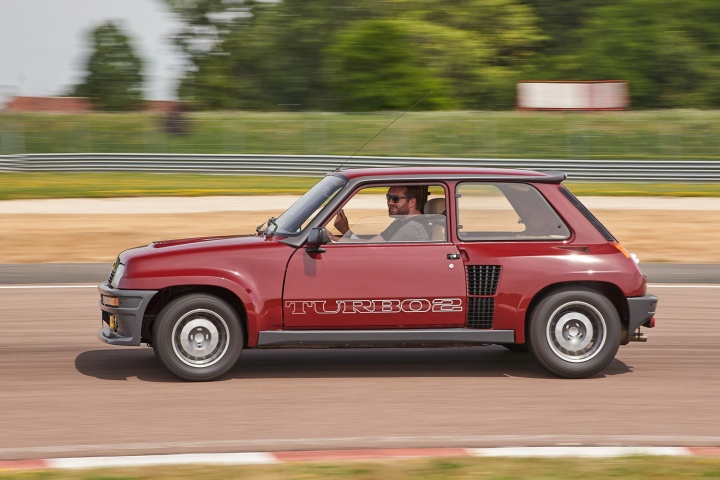 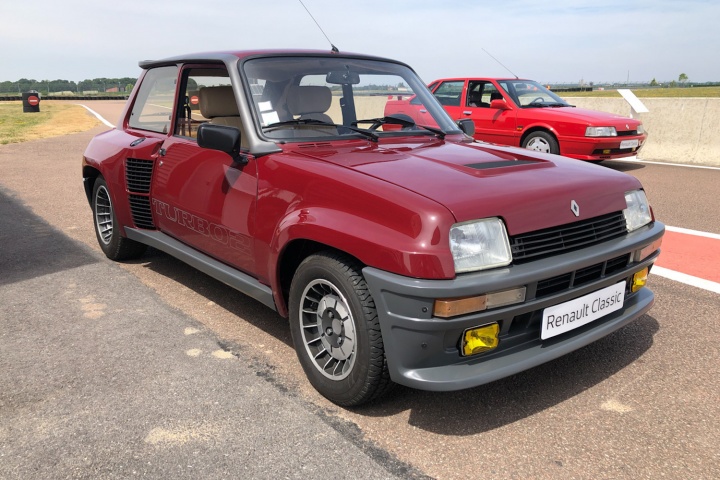 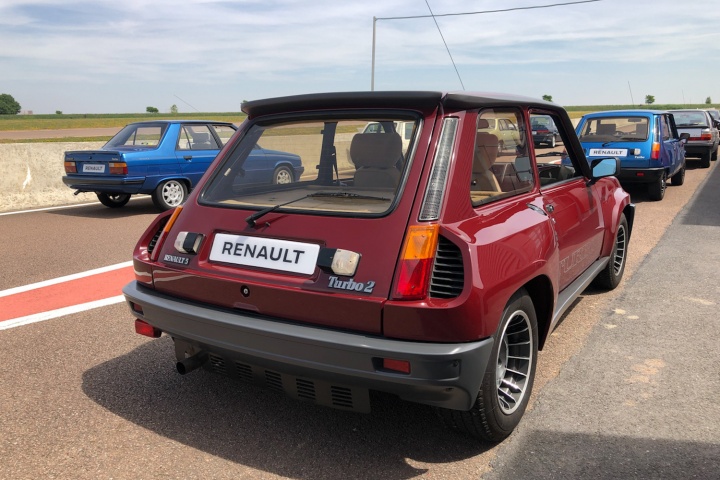 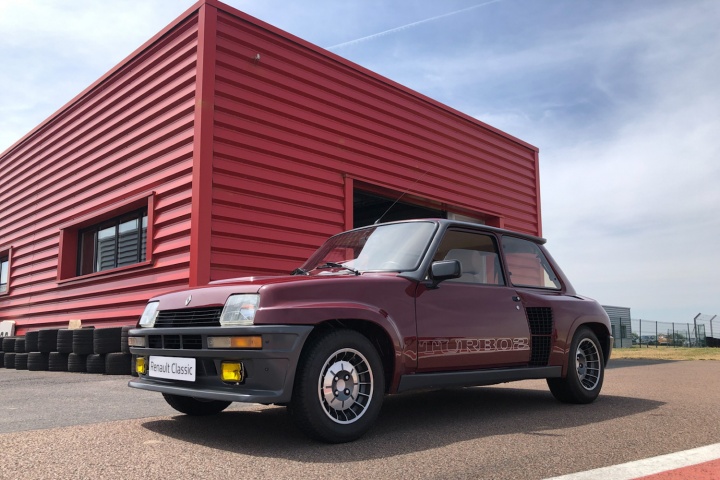 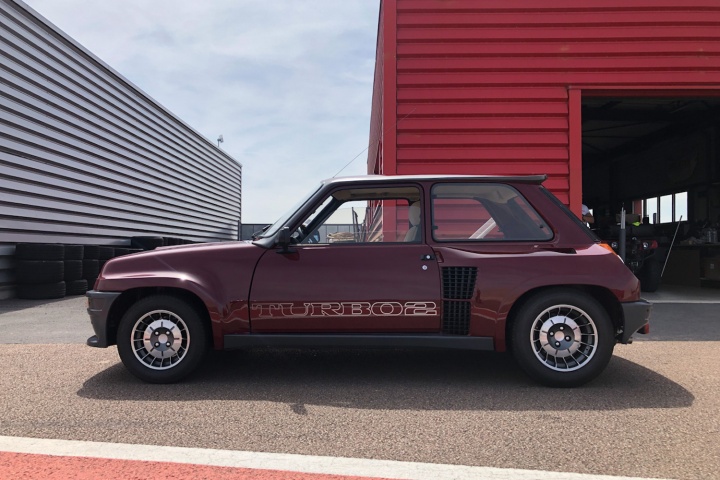 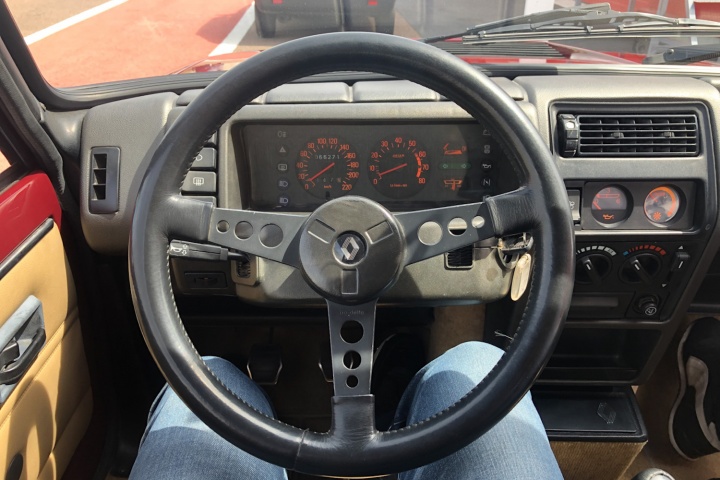 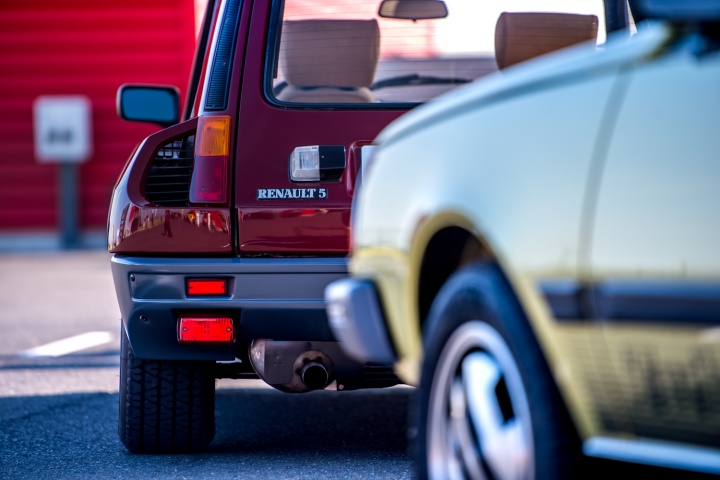 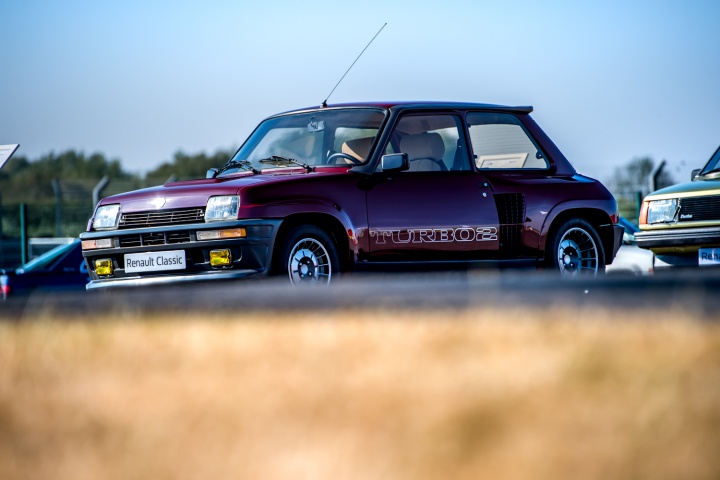 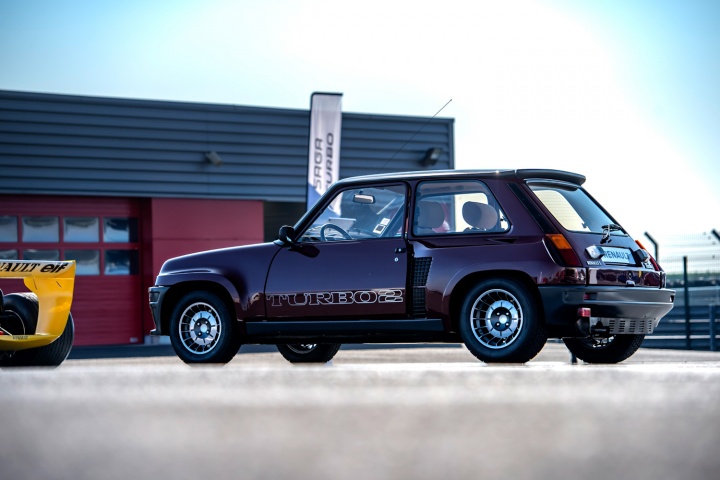 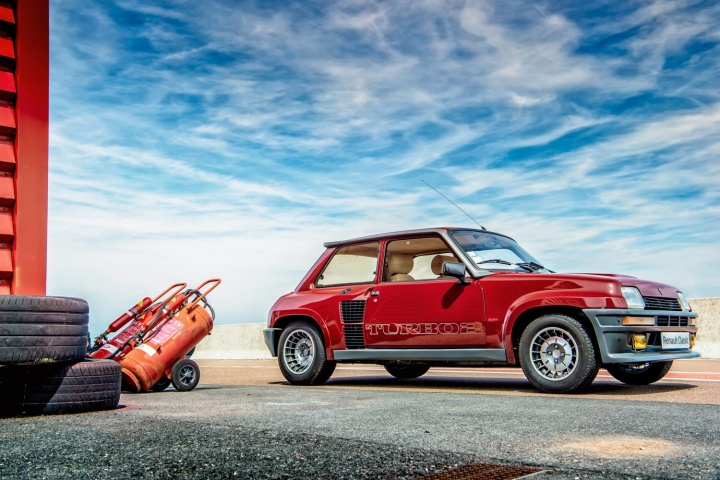 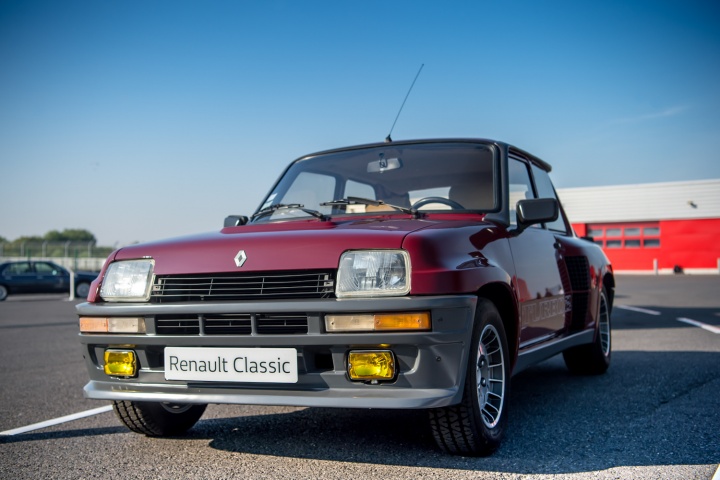 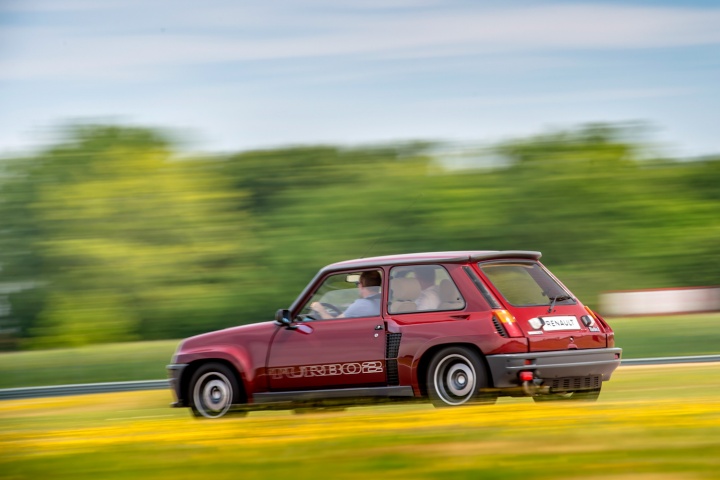 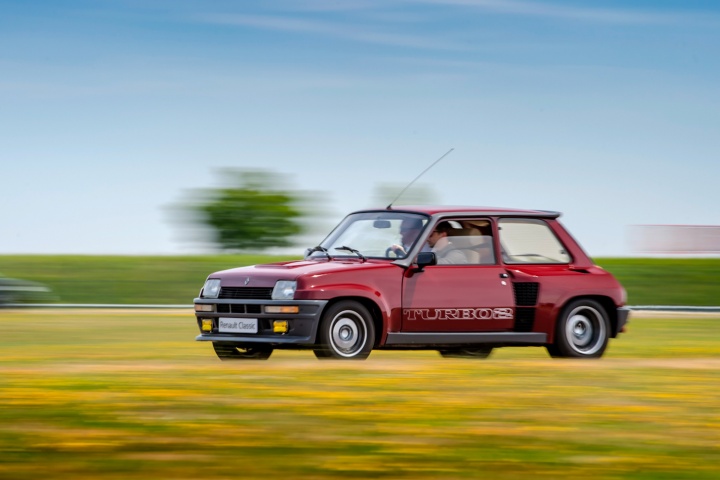 Having introduced turbocharging to its Formula One cars, admittedly to limited success initially, Renault wanted more motorsport results, so it turned its attention to rallying. Throughout the 1970s, cars like the Lancia Stratos and subsequently the Fiat 131 Abarth and Ford Escort RS1800 dominated the scene. Renault already had the 5 Alpine as its hot hatch, but it would need something more.

The Renault 5 Turbo first appeared in public at the 1978 Paris Motor Show, but wouldn't go into production until the start of the 1980s. Its look is one that seems to help define the decade that also brought personal computers to the home, saw Toht's face melt off in Raiders of the Lost Ark and the roll-out of 24-hour news.

With the engine moving to the rear-mid position, significant work has needed to make it all work, and that extended to creating a bespoke body for the car. Renault drafted in Marcello Gandini at Bertone. For Renault to race it in the World Rally Championship, it would have to build and certify 400 examples under homologation rules. In comparison to the already quick Renault 5 Alpine, this thing was something of a monster, in appearance anyway.

Even as I walk up to the car now, in its Bordeaux paint and beige corduroy interior, its menace is apparent. This car is the Turbo 2 version, built after the initial 400 done to homologate the R5 Turbo rally car. It uses more stock parts from the Renault 5, including the dashboard and seats from the Alpine version. In many ways it's more civilian looking than the rarer Turbo 1, especially in this specification.

You can't help but spend time looking around it, soaking in the details: the grey plastic bumpers contrast wonderfully against the red paint; there are yellow fog light lenses; and a bulging bonnet that hides the Gotti steel spare wheel; and of course, those swollen front wings. A grey soft sponge shroud runs up the A-pillars and along the roofline to join into the separate roof spoiler at the back. There are panel gaps at the rear bumper that you can see through from fifteen feet away. But you don't care because this is French automotive engineering at its most bonkers.

As you slide your hand in behind the door and press in the lock barrel to pop it open you get a sense of the wacky proportions and stance of the Renault 5 Turbo. The plastic intake covers on the leading edge of both rear wheel arches are every bit as simple, yet glorious, as the large 'Turbo 2' font emblazoned along the lower section of the doors.

The seats are more upright than you might expect, mainly due to the rear bulkhead. Like so many cars from this era, driver ergonomics weren't always top of the design brief. The five-speed gear selector is low enough, while the pedal box feels tight even for my modest size nines. Unlike Italian supercars of a similar era that are offset inwards due to the front wheels, my feet are slightly canted to the left, away from the chunky centre console.

You stop for a moment to soak it all in - the simple, easy-to-read dials with a bright orange font. The speedo on the left reads to 220km/h, the tacho next to it 'orange-lines' at 6,500rpm. More important, yet off to the far side of the centre console, is a Jaeger turbo boost gauge. Its drilled three-spoke Iso-delta steering wheel is perfectly circular, wrapped in leather that's just starting to show wear to match with the 66,000 kilometres this example has racked up to date.

I twist the simple key and give the throttle a few prods to help the engine splutter into life. It quickly settles to a purposeful buzzy idle. The only advice I'm given is that the gears are close and to watch downshifting from third to second, as it's all too easy to slot it into reverse. That's one thing I absolutely do not want to do today. Despite the engine being right behind you and separated only by some light engine covers there isn't an overwhelming level of noise in the cabin. Easing out of the parking space the non-assisted steering quickly lightens up as speed increases. Even now you can sense the rearward weight bias in the car. Driving around off-boost is pretty sedate but your excitement levels build just as the turbo does and things quickly change.

As the revs increase, the engine note moves up a couple of octaves, accompanied by increased turbo whistling, and then you get this surge pushing you along towards the next upshift. With the Garrett T3 turbo on song, there's an incredible cacophony resonating around the cabin. It feels quick. Quicker than the numbers suggest, but there's undoubtedly some petrolhead intoxication happening. I drink it in, and as I become more comfortable with the car, we pick up the pace. Faster upshifts keep everything spinning nicely. Despite the small pedal box, there's just enough space for some heel and toe action to sweeten the downshifts. It's when you're going from third to second gear that I give it an extra moment, slow my movements down a little, fearful of hearing that agonising grind of accidentally attempting to slot in reverse. Thankfully it doesn't happen.

It's very much a car that you need to keep on the boil. Do so, and it's such fun to drive. Like so many performance cars from the 1980s, there's slowness and predictability to the compliance and movement of the suspension. It leans a little, and you've got some generous tyre sidewalls to squeeze too. The car rides on 13- and 14-inch wheels front and rear respectively, and in this case they're the original factory 'Turbine' alloy wheels. They look sublime - we don't get wheel designs like these anyway.

Its maximum power is quoted as arriving at 6,000rpm, but it feels that once the turbo gets blowing you've always got the performance you need. Then, when you lift off, you get the bang ba-bam-bambam-bambambam on the overrun. Glorious. Considering its layout, it's far from the pendulous, eager-to-put-you-in-a-ditch car that you might expect. It only had 160hp on its best day, and even with the factory upgrade kit that bumped power up to 185hp, the amount of weight around the back axle is enough to keep the 220 section rear tyres firmly pressed into the tarmac. You could, of course, provoke it, and grabbing it by the scruff, especially on a wet day, will either confirm your braveness or stupidity, depending on the result.

At the time of writing this, classic car values are reaching stratospheric levels with no rhyme or reason accounting for it in some cases. A clean example of the Renault 5 Turbo will set you back somewhere approaching six figures, but there are plenty for sale. After all, Renault produced over 4,000 examples of them over a six-year period. For the same money you could buy something that's faster, or more involving, or just outright sexier, but I will walk past every classic Ferrari or Porsche to ogle one of these.

When you break it down and look at it purely from a numbers perspective, the Renault 5 Turbo doesn't seem all that thrilling. But it is a classic example of something being far more than the sum of its parts. The simplicity of its approach, the sheer absurdity of its design (and the very fact that it exists) and how it feels to drive are just part of what makes this such a wonderful car. I'm so glad that it exists, and even happier that I got to drive one.