Skoda dips into its back catalogue for classic reboots 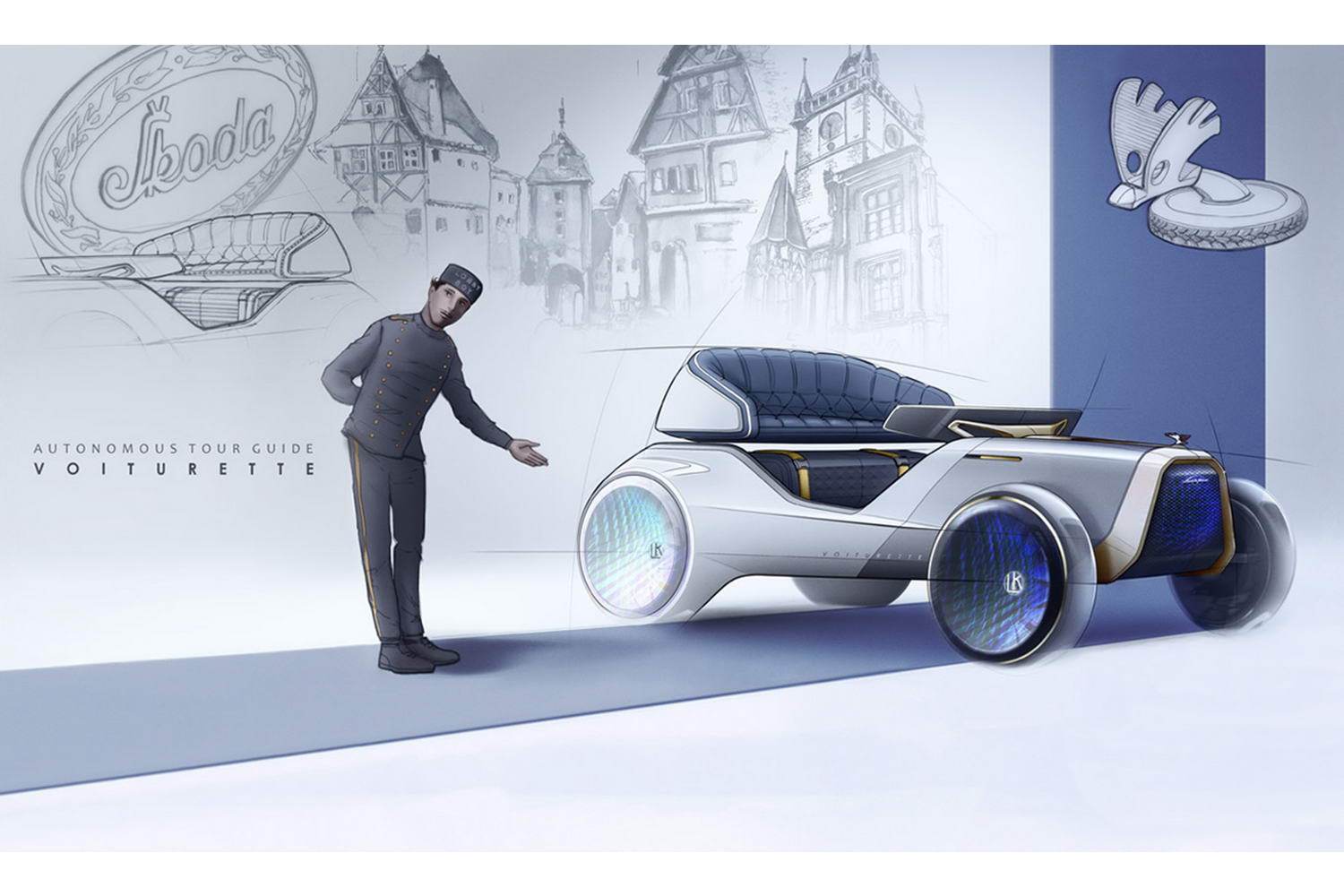 Skoda is celebrating its 125th anniversary this year. The Czech carmaker started work in 1896, when two guys called Vaclav - Vaclav Lauren and Vaclav Klement - made their first 'velocipede' (basically a motorised bicycle). Eventually, the Lauren & Klement company would evolve into Skoda (having merged with a gigantic Czech firm of that name, which had been in business since the 1850s). To celebrate its birthday, Skoda has asked its current design team to dip into the company's back catalogue and update some classic designs for modern-day tastes.

Appropriately enough, the first of these projects is an update of Skoda's first proper car - the 1905 Voiturette A. Created by Yuhan Zhang - a member of the interior design team at Skoda - the Voiturette has been updated into an autonomous, open-top tourer, complete with the high-rise, wraparound bench seat of the original, designed for taking tourists around Prague to see the sights. There's also a big screen in the front to help people learn about the city's history on their tour.

Zhang explained: "I wanted to make a connection between the history of ŠKODA and beauty of Prague. There is a big display in the car presenting a description of the sights as you go, but it could also show passengers the history of Skoda."

Next up is our favourite design - or should that be Favorit? Skoda interface designer Daniel Hájek has taken the 1968 Skoda 1203 van and given it a modern, electrically-powered, campervan update. The original 1203 was a backbone of Skoda's production throughout the 1970s and 1980s, and Hàjek has given it electric power - which suggests to us that it could be pretty easily built on Volkswagen's new MEB platform, alongside the upcoming retro-styled Volkswagen ID. Buzz. To which we can only say DO IT! DO IT NOW!

There's loads of space inside and a pop-up camper roof, and the 1203 Camper features a number of touches that combine old with new. "I thought long and hard about how to reference the original's round lights without them being too retro." Explains Hájek. "That's why there's just a hint of some curves here, but otherwise the light signature is new and bold."

Next up was a 1959 Skoda Felicia cabriolet, surely the most ostentatious of all Communist-era cars. Interior designer Martin Leprince spent hours with an original example kept at the Skoda museum in Prague and has taken the original's wraparound windscreen and finned tail-lights to crisp, modern extremes, with a concept that has more than a hint of a 1961 Lincoln Continental about it. Leprince's 21st Century Felicia has a "floating" windscreen that hovers a few centimetres above the body and curves inwards to serve as the instrument panel and infotainment display. "I studied glass statues, and with the help of photographs and pictures I tried to come up with a way to draw a 3D glass object so that the whole was comprehensible and looked realistic. That kept me busy for quite a few days," he explains.

Skoda is, of course, famed for its motorsports exploits, so of course, some of the redesigns were going to reflect that. Interior designer Ljudmil Slavov chose to recreate the brand's classic Popular Monte Carlo, turning it into a sleek, curvaceous roadster with classic motorsports colours. "The Popular Monte Carlo is one of the most beautiful cars ever made, and I found its history fascinating as well. It is incredibly elegant and tasteful," explained Slavov, who also chose to replace the traditional centre speedo with a floating hologram and a wraparound screen.

Finally, stylist Aymeric Chertier opted to update one of Skoda's original rallying heroes - the 130RS coupe. "I wanted to refresh the original car, not change it," explained Aymeric Chertier. "I retained its essence and characteristic lines and added certain details that we know from modern WRC cars, for example," the designer said.

Want the bad news? Skoda officially says that: "it has no specific plans to develop any of the designs created as part of the icon project" but the good news is that: "the brand's design team continues to seek inspiration from the past, the present and future environments." We just think an electric 1203 Camper and that re-invented 130RS would make a perfect two-car garage...