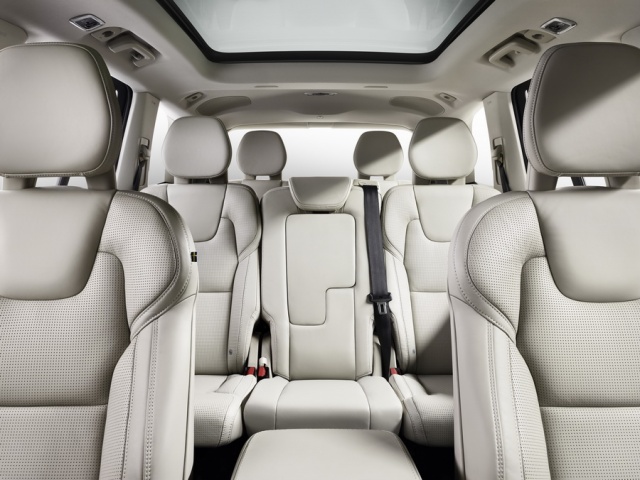 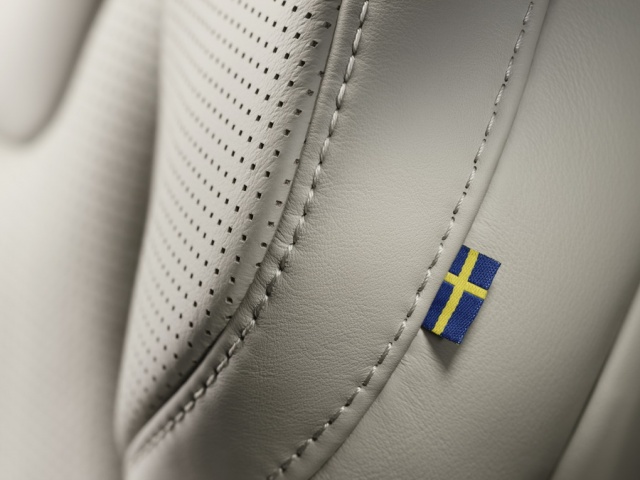 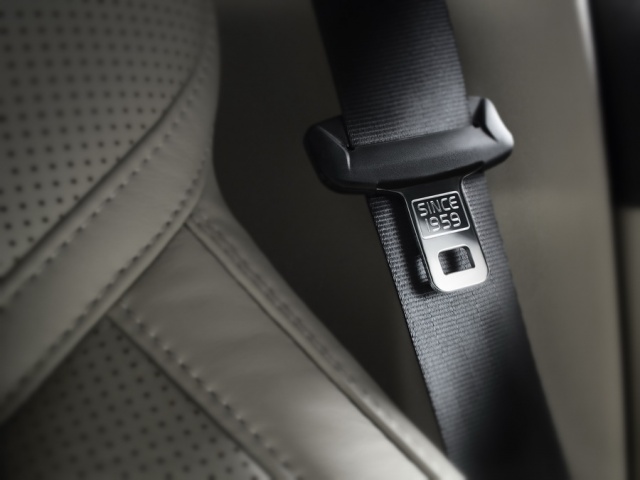 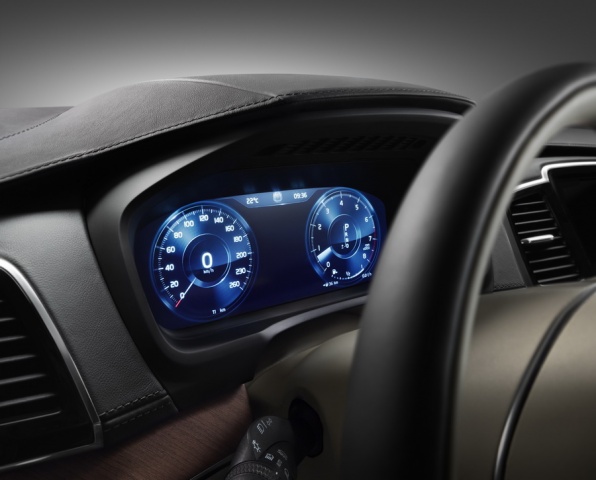 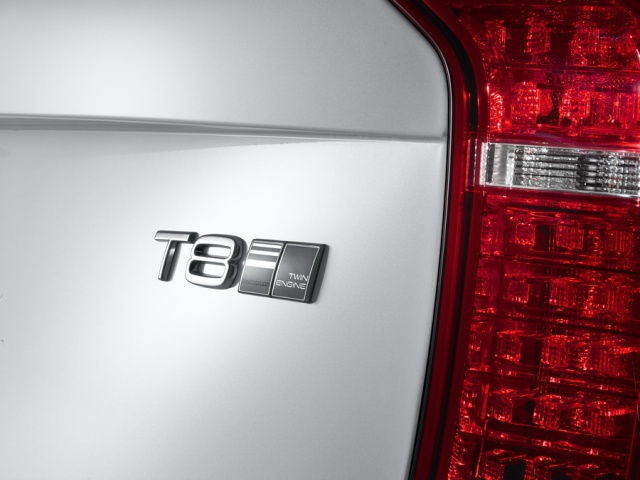 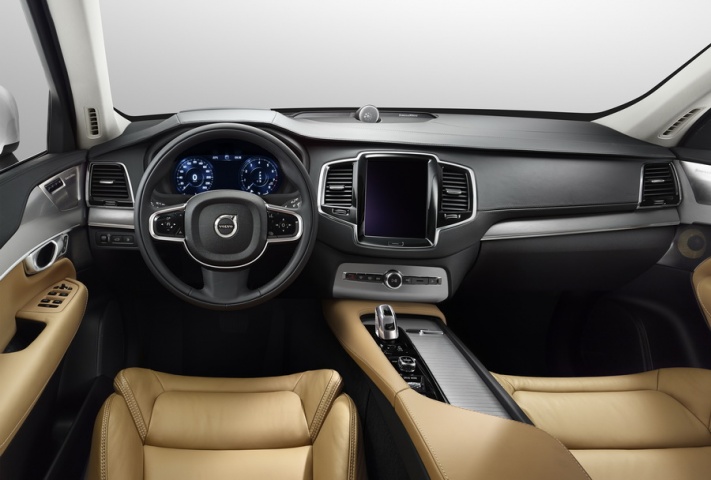 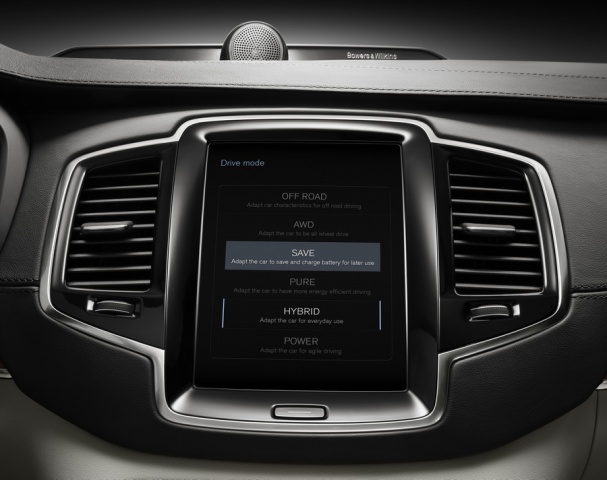 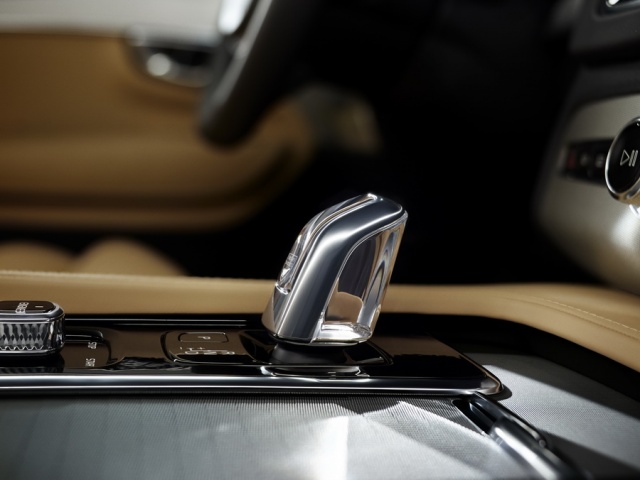 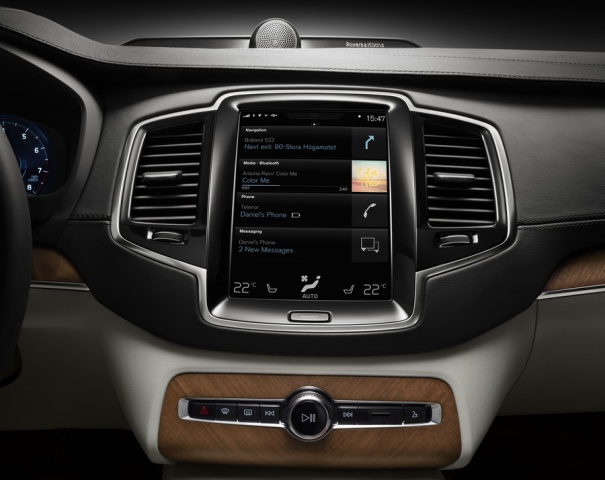 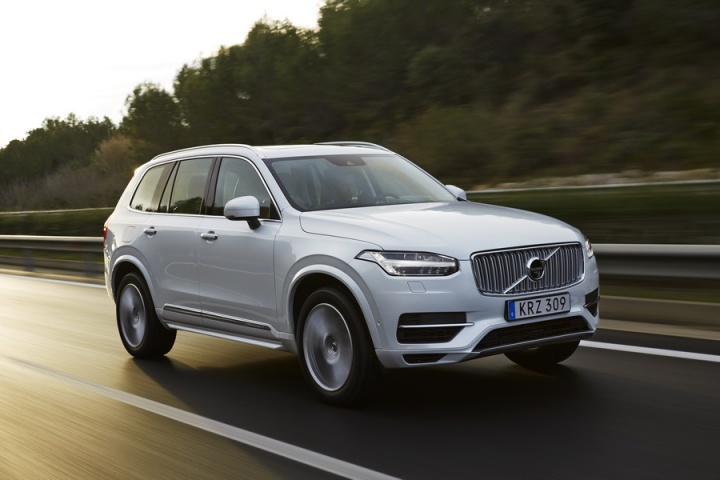 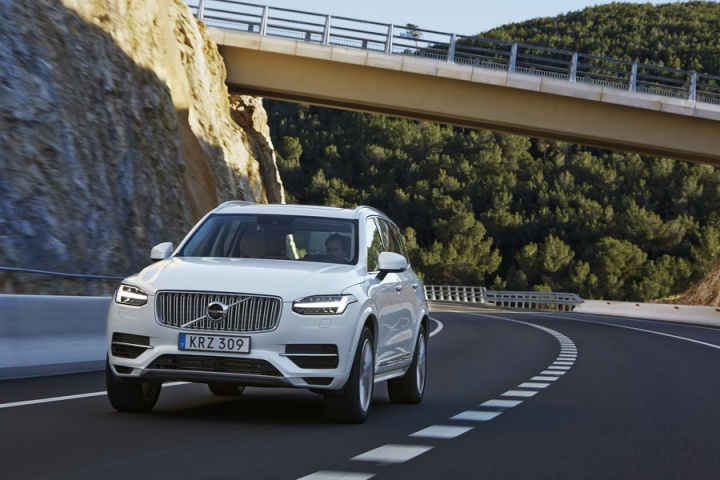 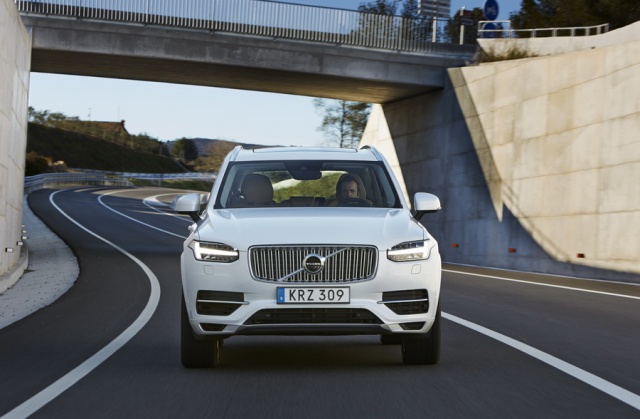 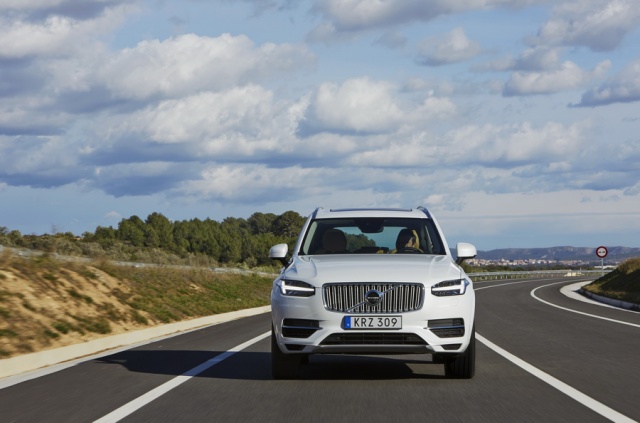 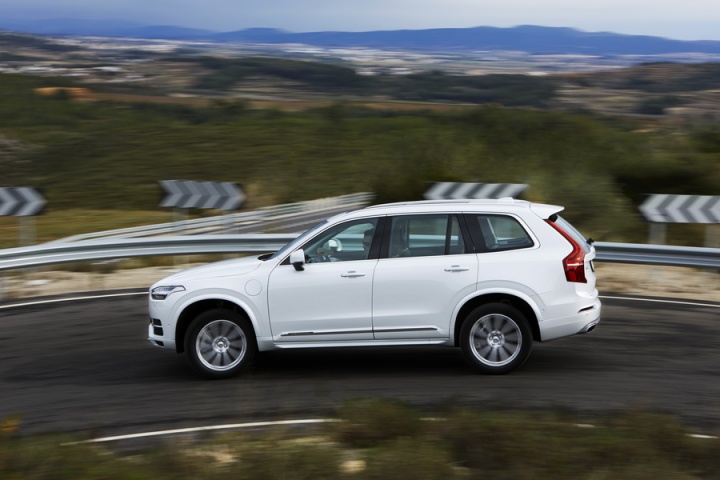 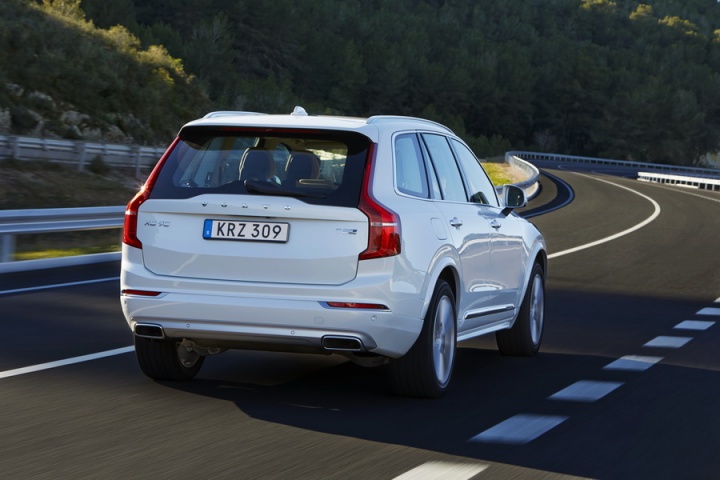 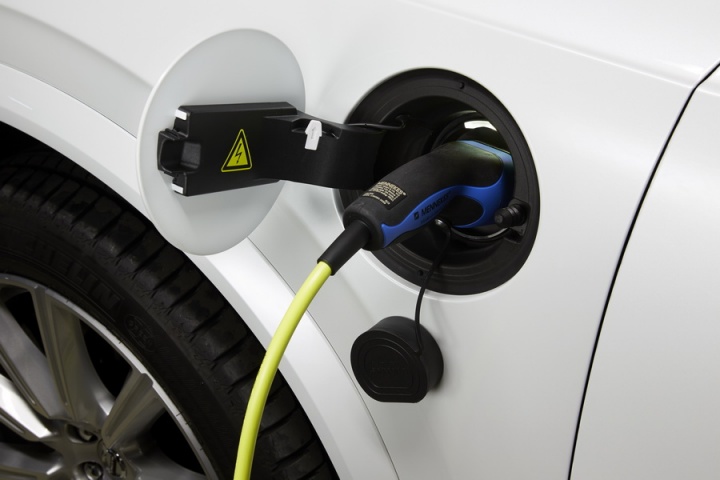 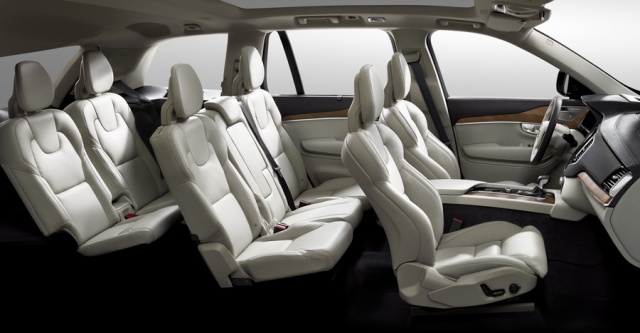 The Volvo XC90 T8 plug-in hybrid rivals those a class above.

There is no doubting that the new XC90 looks a lot less friendly than before. Instead of the old-style, big-eyed Lego-block styling, there is a much more menacing mien - a squinty-headlight, gaping grille effect that, especially in darker hues, looks as if the Swedish Men in Black are out to get you. It's possibly not quite so pretty as it might be, but it is a shape that works very much better in the flesh, in natural light, than it ever does on a screen or a motor show stand. The "Thor's Hammer" LED signature in the headlights is an especially nice touch though, and it will be standard on all Irish XC90s. Big 19-inch wheels are also standard, but you can, ahem, 'murder it out' with optional 22-inch alloys if you fancy...

Inside though is where the XC90 really lays down a marker against the competition. Audi will have to, we reckon, hand over its cabin design leadership award to Volvo now because there's a lot going on here and it's all good.

Let's start with the seats - typically Volvo-ish, they're squishy, supportive and wonderfully comfy. But, they're also slimmed down to create as much interior space as possible. Indeed, there's proper stretch-out room for (very) full-sized adults in the back and even just about enough space for a six-footer to squash into the third row. The boot is a healthy 671 litres in capacity with those seats folded flat by the way, and for those thinking with their family heads on, yes, you'll be able to fit three child seats abreast in the back.

Forget that though because the star performance is up front. Ahead of the driver is a full TFT instrument pack, which is similar in layout and style to that seen in the Audi TT. It works rather brilliantly. In the centre stack, almost all buttons have been eliminated and replaced by a multi-function touch-screen that looks like an iPad and which, according to whispers, Apple itself has had a small hand in. It's the best such system we've tried yet - intuitive, handsome and easy to work your way around. It even works if you're wearing gloves (this is a Volvo, after all) and swiping up, down and sideways soon becomes second nature. It's also very fast-reacting, not leaving you waiting around for a command to be followed as some systems do.

For the rest, the quality of construction is excellent and the optional Bowers & Wilkins sound system (which has a setting that can replicate the sound of the Gothenburg symphony hall - yes, really) is just ear-dashingly brilliant. Best car interior of the moment? Yup - you'd need a Rolls-Royce to do much better than this.

OK, this is the T8 Twin Engine plugin hybrid so prepare for a little science. The hybrid bit is a 60kW, 80hp electric motor mounted between the rear wheels, fed from a stack of batteries that lurk under the centre console. Charge these from the mains (it takes about four hours to do so) and you can go for a claimed 40 kilometres on pure electric power. You'd have to drive fairly gently to do that, but we reckon it's do-able.

Providing the petrol power side of the equation is a super- and turbocharged 2.0-litre four-cylinder petrol engine with 320hp. Prod the throttle hard and, if there's charge in the batteries, you get a massive kick up the backside and the XC90 will hurl itself to deeply un-Volvo-ish speeds with no small ferocity. The way the car drives can be tweaked between a standard hybrid mode, a 'Pure' mode that tries to keep it on just electric power as much as possible, a Dynamic mode that gives you some exceptional thrust and a Charge mode that tops up the batteries as you drive. Now, Volvo claims that you can get 104mpg (2.7 litres/100km) out of the T8 and on one shortish run we did manage to see the sunny side of 90mpg (3.1 litres/100km). On another, brisker, longer run with lots of mountain roads and some fast motorway miles, we averaged just under 30mpg (9.4 litres/100km). As with any hybrid, the fuel consumption will depend mostly on how you drive it and where you drive it. From this brief acquaintance, we'd say that the D5 diesel is probably still the better all-round choice if you're doing lots of long hauls. However, if you mostly motor in town and you can get an electric car plug onto the side of your house, then a T8 (which costs just over €2,000 more than the D5) could make a lot of sense.

Whatever about consumption, the T8 is a joy to drive. Refinement is exceptionally good, even when the car dips into electric-only mode - tyre and wind noise are very well suppressed and conversation with rear-seat passengers is easy even at motorway velocity. The handling is pretty good too - not as dynamic or as plugged in as a BMW X5, but the T8 has slightly sharper, more fulsome steering than the D5 (possibly, due to the extra 250kg it's carrying) and it acquits itself well even on tricky, tight roads. You won't throw it around for the hell of it, but it's a reassuring companion on all roads, and a brilliantly long-legged one on straight roads. Visibility out is terrific too, a result of Volvo ignoring the trend for pointlessly rising belt-lines or 'coupe-like window graphics'. Even for a big beast, parking's a doddle when you can see out this easily.

Those who bought a new XC90 for €50k last year will get a shock when they see that this new one starts with a 7... In fairness though, prior to that very good value run-out special, XC90s were never cheap, and most buyers specced them up. The T8, as mentioned, costs around an extra €2,000 over and above the D5 (a cheaper, front-drive D4 is coming next year) thanks to the grant from the Sustainable Energy Authority and the VRT refund. Is it politically sensible to subsidise the purchase of a luxury SUV from public funds? Perhaps and perhaps not, but it does mean you can access all this high-tech for a reasonable premium. T8s get a specially made crystal gear shifter, hill descent control, a panoramic roof and third row air conditioning over and above the standard spec, which includes satnav and full leather. The best bit? That CO2 rating means you can tax it for just €170 a year - the same as a Toyota Yaris Hybrid... While it's tough to call a €70k car good value, there's no getting around the fact that this is really multi-role, multi-functional and, thanks to the four-wheel drive system, all-weather to boot. It can do luxury car, family car and load lugger all in one and it has a cabin that's nicer than that of a €140k Range Rover Vogue.

There's an eight-year warranty on the battery, and Volvo says it can be accessed and replaced quite easily (put the car on a hoist and it drops down once you've removed the exhaust centre section apparently) should anything go wrong. Needless to say, Volvo has also put safety to the forefront, so the automatic braking 'Intellisafe' system now also works at night and at speeds of up to 50km/h while there are other touches such as a shock-absorber in the seat base that prevents spinal injuries should you run off the road and down an embankment. Other touches? How about the little Swedish flag sewn into the side of the seats and the 'since 1959' script on the seat belt buckles to remind you just who it was who invented the three-point safety belt?

There's another intangible thing too. I won't get into the nerdy minutiae of what some Volvo engineers and I discussed over dinner (clue: it was about gearboxes), but it's clear that the Swedish firm still puts more serious thought and intelligence into the design of its cars than many competitors. Quite apart from the fact that it's the only company, alongside Mercedes-Benz, that logs real-world accidents involving its cars to help improve its safety systems, there's also this - in conversation with one of the engineers, talking about computer modelling for prototype systems, he said "yes, but that is electronics and a car is a mechanical object. I care more about what I feel out on the road than what a computer tells me." I almost wept with joy...

OK, we have a slight reservation over fuel consumption, which really needs a proper test, with fully charged batteries, on roads and routes that we know, but the T8 version of the new Volvo XC90 makes a wonderful alternative to the D5 diesel. If the fuel burn works out in your favour then it could actually be cheaper to run than the diesel, is really high-tech and won't be banned from any city centre in Europe. It's also luxurious (yet practical), fast (yet comfortable) and while that €70k+ price tag does feel a little sharp, it's actually much better value than any rival car and can compete squarely with some from more prestigious segments above. An immediate, firm favourite then. Volvo at its well-thought-out best.