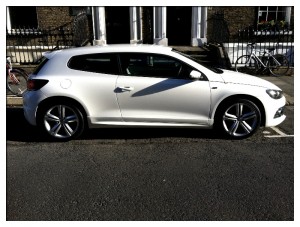 If the Volkswagen Golf is the sweet, dependable girl with the nice personality, the Scirocco is its posher, prettier sister. But this one isn't all about being flash; it's a diesel. Perhaps sensible can be sexy after all?

Volkswagen went through a pretty dull design period in the early part of the last decade. The Mark IV Golf was bland; so was the Passat. Ditto the Polo. People bought Volkswagens for their residual value and other equally sensible reasons. They were 'okay' to drive too, but nothing really stood out. Thankfully things suddenly got a whole lot better with the Golf GTI, which was then followed to market by the Scirocco. Designed by a Californian (Derek Jenkins, now at Mazda), the Iroc Concept became the new Scirocco and suddenly we all paid attention again.

The Scirocco is a really eye-catching car. It has cues from the original model, but it is bold and contemporary too. Sitting on the right wheels (18-inch rims in our test car's case), the right colour (Candy White) and with the right body kit (R-Line Exterior Pack) - you really can't keep your eyes off it.

Inside, it is beautifully put together. The quality is on a par with Audi. Interior space is good in the front, but rear space is limited. Kids will do fine back there though. Luggage space at 292 litres isn't bad for this sort of car and is about the same as you will find in an Audi TT.

The instinct is usually to go for petrol power in a coupé, especially one with notions of being a sports car. That's the tradition at least. But now we have emissions laws and better, quieter diesel engines. The 170hp 2.0-litre unit in the Scirocco is one of these. It is urgent, doesn't run out of puff too quickly and is potent enough too. This engine wasn't initially offered in the Scirocco, but this higher power really suits the car. With 350Nm of torque 0-100km/h takes 8.1 seconds and the top speed is 222km/h. It uses a six-speed manual gearbox that is smooth too, although we'd still probably opt for the excellent double-clutch DSG transmission, which offers the best of both worlds between manual and automatic.

The Scirocco manages to do a lot of things very well. Our car featured, as standard, the Adaptive Damper Control (ACC), which adapts the shock absorption rate to the road conditions and driving style you require, with a choice of Normal, Comfort or Sport settings.

There is a nice weight to the steering in the Scirocco too, and while the diesel version, even this 170hp model, doesn't really make you want to push it on too hard (feeling a little heavy at the front-end), it has plenty of grip. The brakes can feel a little on the snatchy side at first, but you soon get used to this. The steering isn't razor sharp either, but is pretty communicative.

Volkswagen products are much more generously equipped than in previous years and there is less need to dip into the options list, but there are still a few boxes that need ticking before you get the absolutely right car. While our car featured "Climatic" air conditioning, cruise control, Adaptive Chassis Control, rain Sensing wipers, sports seats and ESP (Electronic Stability Control) as standard there was still room for €4,200 worth of options in the shape of Xenon headlights, the "R-Line" Exterior Pack and 18-inch Mallory-style alloy wheels. It also featured an optional Safety Pack with 'Premium Bluetooth Phone Preparation' (which I couldn't get to work with an iPhone 4) and Park Distance Control, which is useful given the Scirocco's restricted rear visibility. Our car's colour, Candy White, is a non-metallic hue so won't cost you extra.

Emissions of 139g/km mean that the car sits in Band B, so you pay just €156 to tax this car and fuel economy of 5.3 l/100km is impressive too. All in all this car came in at €36,195, which really isn't bad, but there is the Peugeot RCZ to contend with now, which looks great, has an excellent diesel engine on offer and comes with most of its toys thrown in as standard. The difficulty perhaps with the Scirocco is that the brilliant Golf GTI can be had for the same money.

VW's Scirocco looks good, is really well built, is better-equipped for the money than you might expect and would be a very easy car to live with. Residuals are strong, and likely to be stronger on a diesel model as used car buyers become increasingly shy of petrol models.