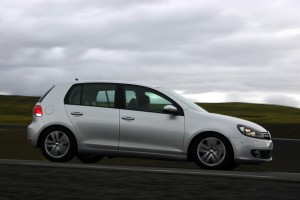 The Golf is as much a part of the Irish motoring scene as the Toyota Corolla or Starlet-driving nuns and it always hovers near the top of the sales charts because it is well built. On top of that, the Golf is seen as being more upmarket than some of its key rivals. A conservative makeover for Volkswagen's Golf brought big improvements in quality and refinement and premium car equipment to the sixth generation model launched in 2009. Sharper to drive and neater inside and out, the new Golf isn't a radical change over the outgoing model, but that's part of its appeal.

Where the Golf feels different is inside. The dash is much the same as those used in the Scirocco and Eos, with improvements to interior quality and feel. Volkswagen also makes a big deal out of the white backlit instruments, binning its old signature blue instrument lighting for the new Golf. It feels like a far higher quality car inside, the seats firm and supportive while refinement is excellent.

Refinement improvements have been one of the key goals in this new sixth-generation Golf. Getting in and turning the key underlines that VW has been very successful in achieving that aim. It's eerily quiet when starting, Volkswagen's change to common rail turbodiesels meaning even turning the key in the TDI model requires a quick check of the rev counter to confirm it's fired into life.

Of the engines it's the turbodiesel that impress most. The easy, linear delivery of its power makes it deceptively rapid, the 2.0-litre 140bhp version managing 0-100 km/h in 9.3 seconds. Even though the TSI 'Twincharger' petrol engine covers the same sprint 1.3 seconds quicker, you won't feel short changed with the 90- or 105bhp diesel engines, which are incredibly frugal, residing in tax band A.

Add the Golf's impressive new found refinement and it's easy to find yourself carrying more speed than you think in either. Improvements to the chassis make the Golf a more entertaining car to drive than before, the steering nicely weighted and precise though there's precious little feel through the wheel's chunky rim.

VW's optional DDC Adaptive Chassis Control system gives the choice between Sport, Comfort or a default setting. Sport firms everything up to the detriment of ride comfort and it's actually best left on its default setting for everyday driving. Roll control is impressive, the Golf rewarding more than its predecessor in the bends, though it still trails its Ford Focus rival for ultimate dynamic ability and driver feedback and interaction.

However, Volkswagen isn't trying to out-Focus the Ford with its Golf regarding driver appeal; VW's customers are looking for something a little more refined and mature. And the Golf delivers. It's hugely refined, feels beautifully built and drives sharply enough for all but the most demanding of drivers. Every derivative across the range sees improvements in economy and emissions - critical in these greener times - and Volkswagen also offers a BlueMotion version with just 99g/km of CO2 - that being the level of the existing Polo BlueMotion. The TSI Twincharger engine underlines VW's downsizing policy with the Golf, its output of 158bhp achieved from a super- and turbocharged 1.4-litre engine, while combined economy is an impressive 5.9 l/100km.

Volkswagen has been conservative with its sixth generation Golf's styling, but the overall package is significantly improved. Building on the Golf's reputation for quality the new car really does feel above its key rivals for interior ambience, comfort and refinement. It drives better than ever too, and should you have deep pockets you can specify it with the sort of equipment that used to be exclusively reserved for the executive class.