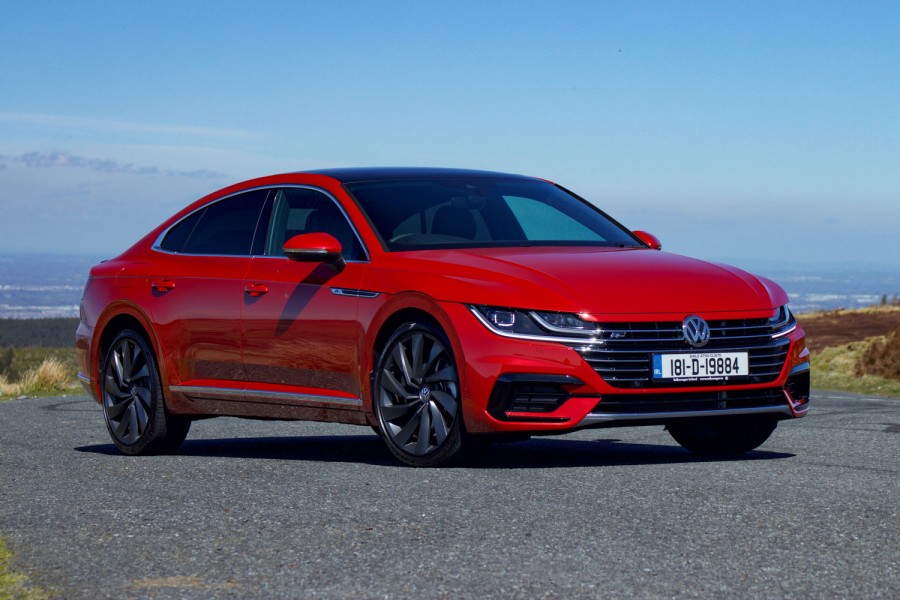 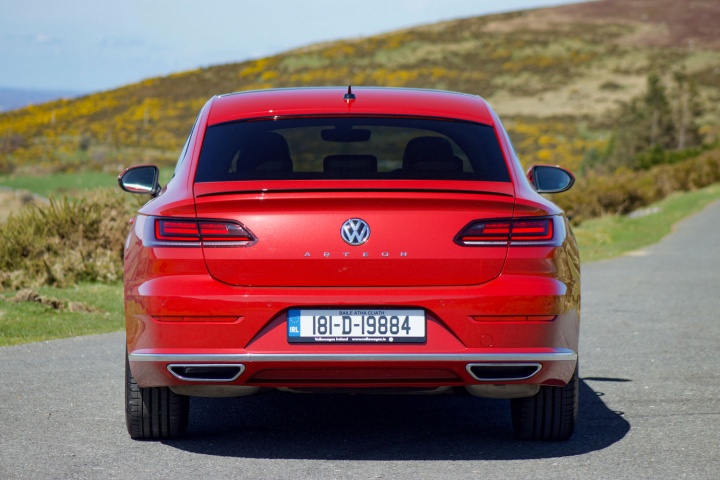 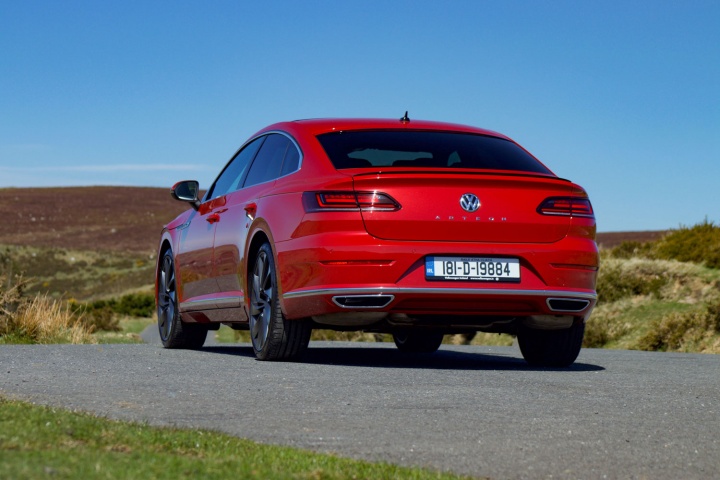 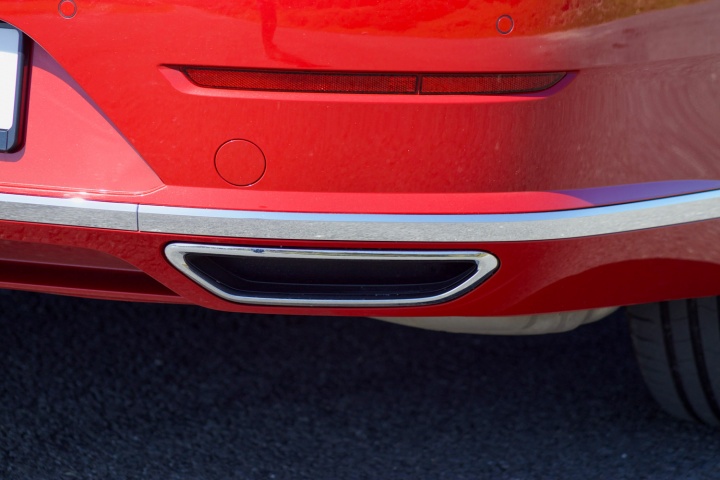 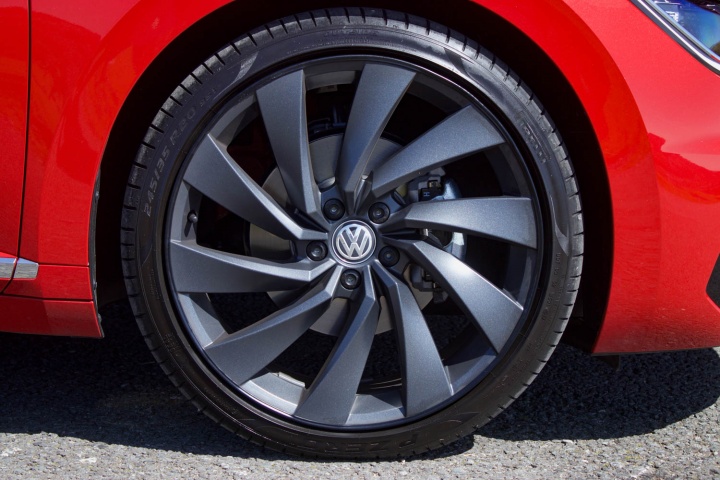 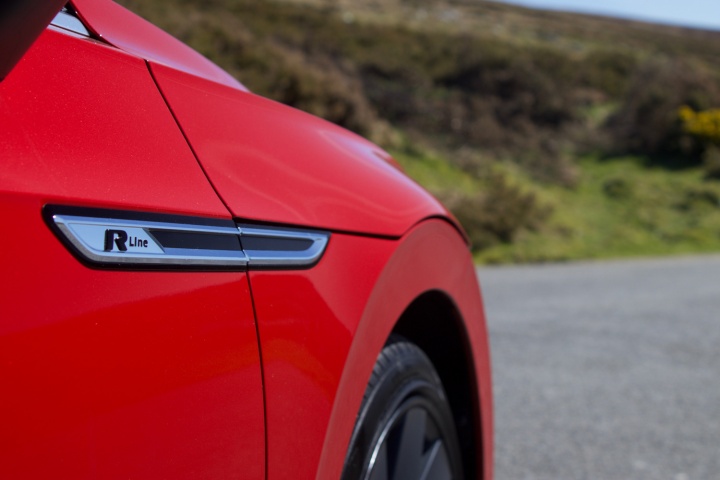 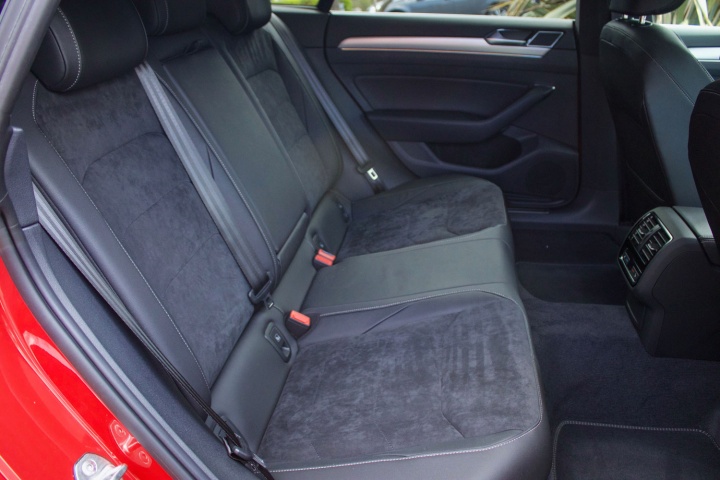 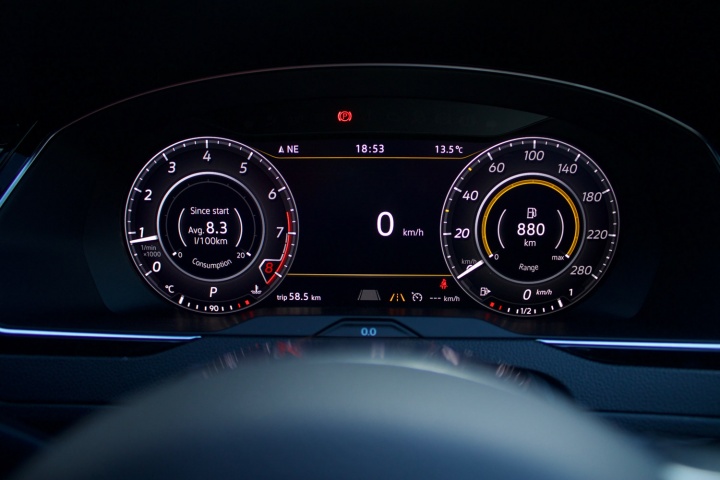 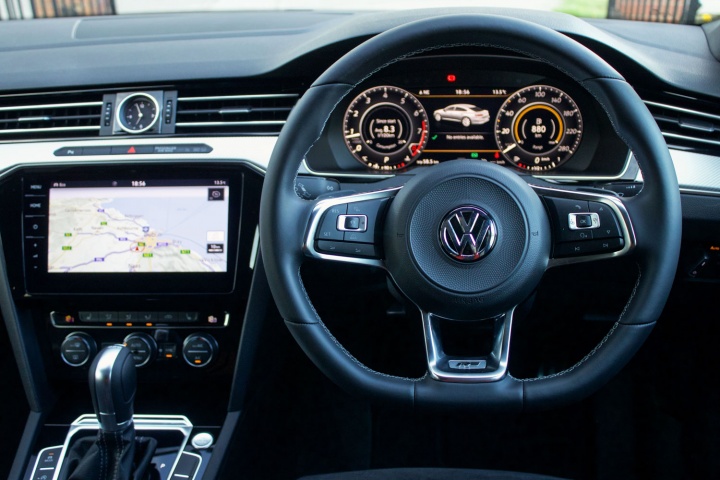 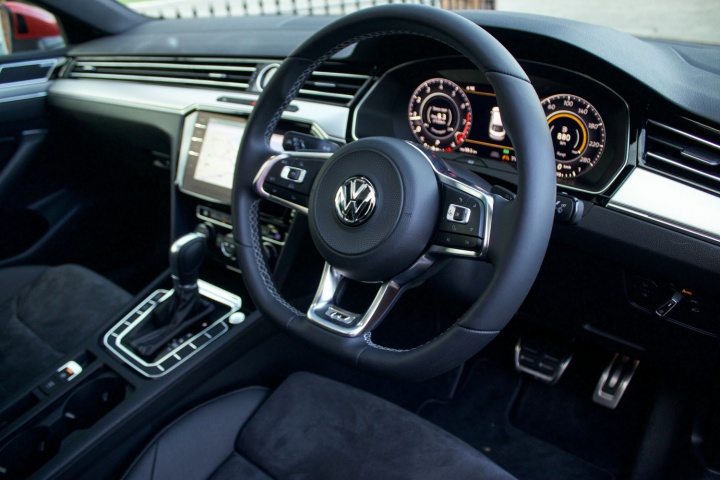 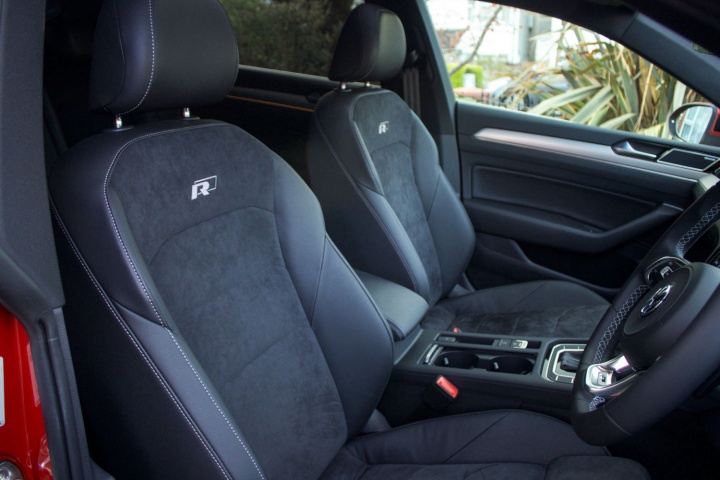 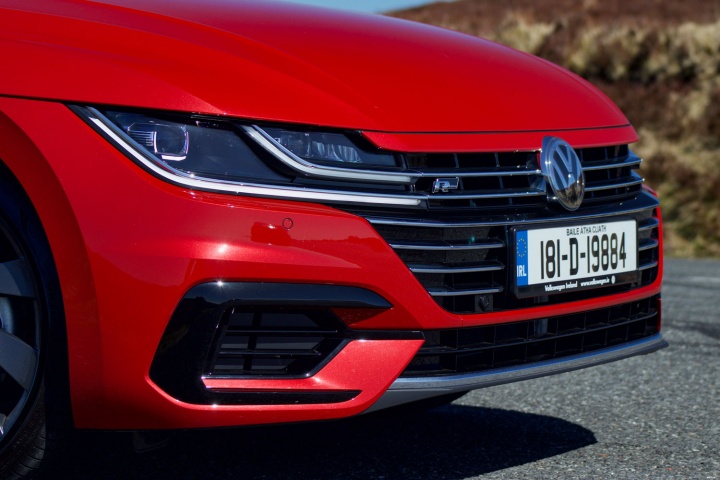 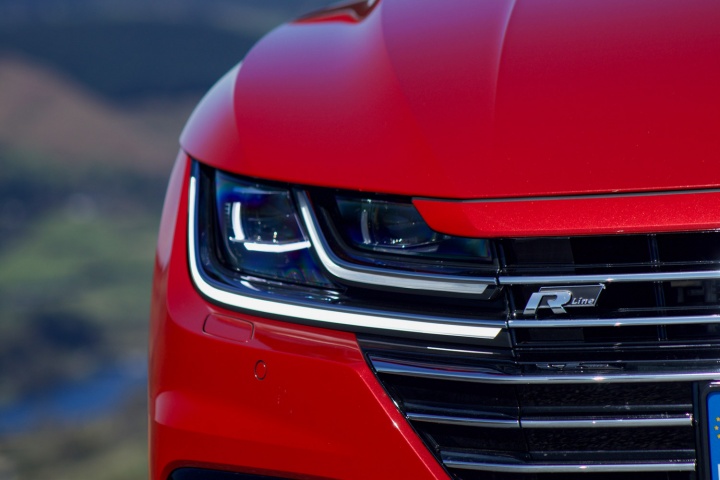 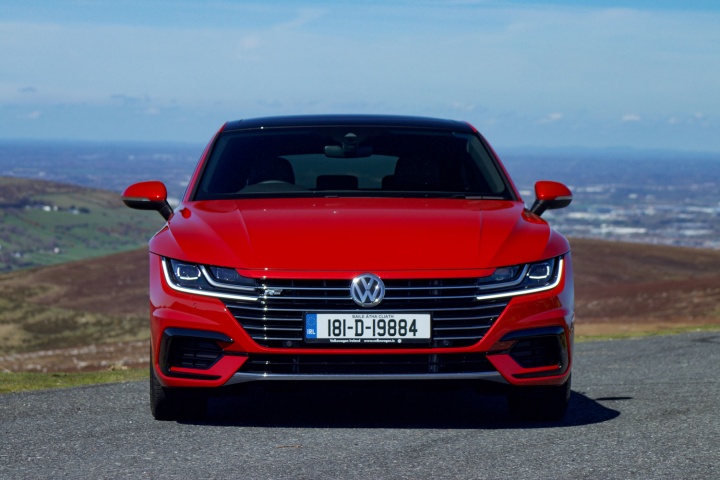 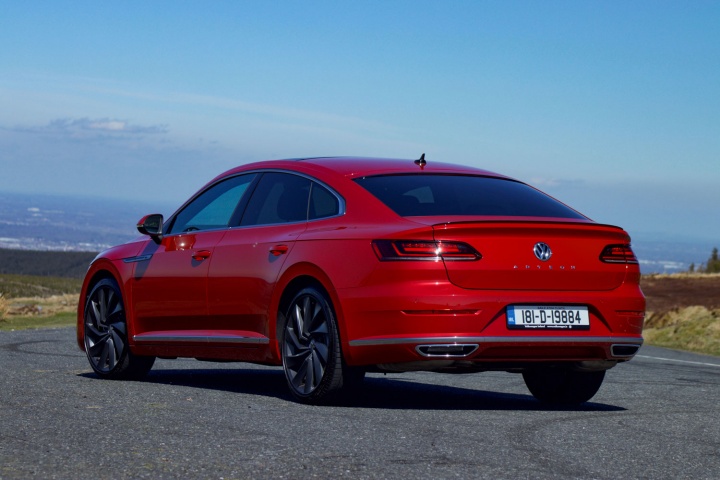 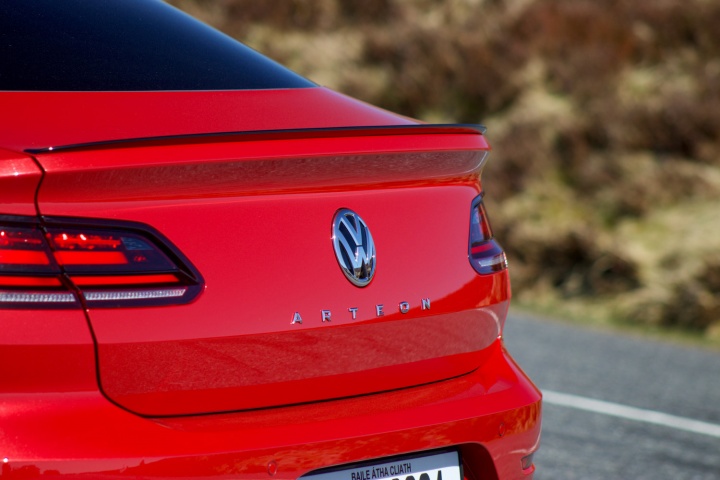 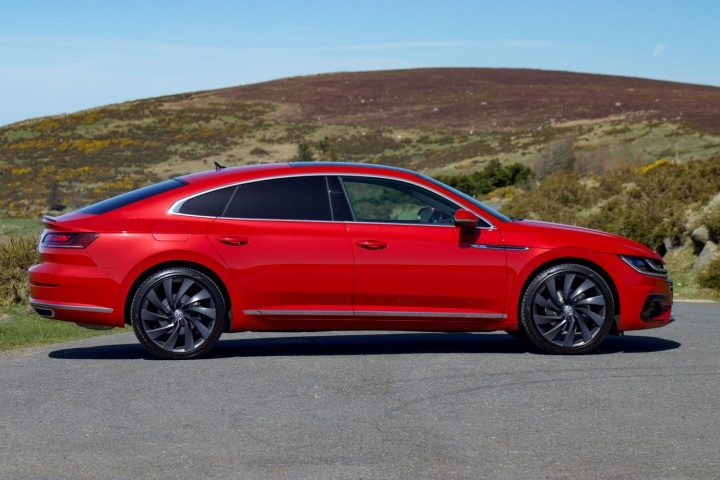 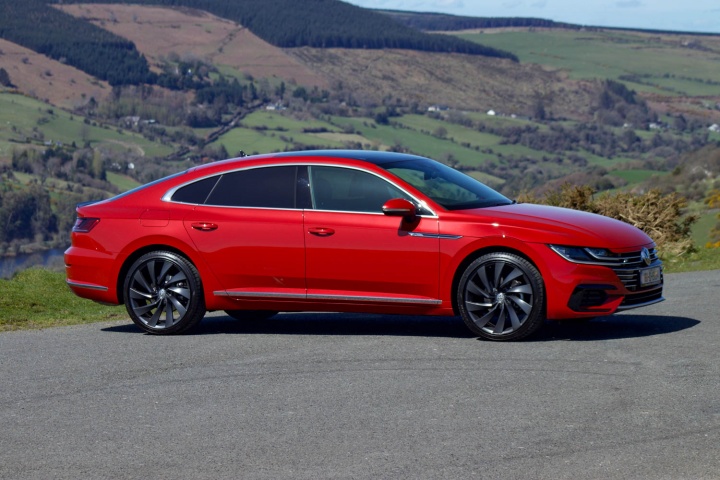 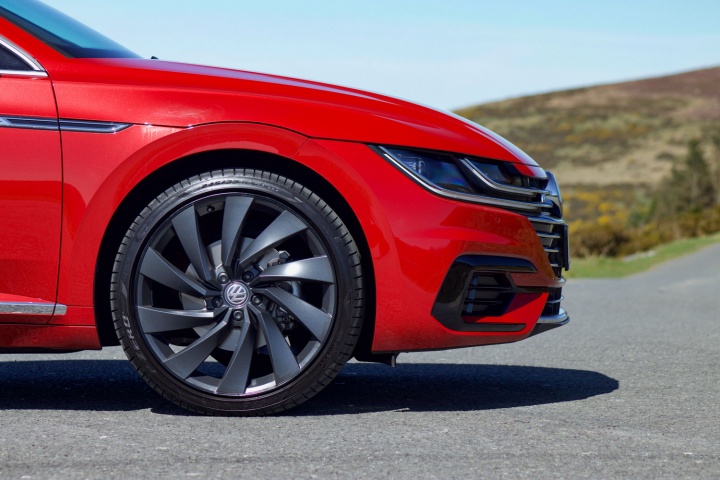 A petrol-fuelled version of the Volkswagen Arteon finished in the sporty-looking R-Line specification, a snazzy colour and a few choice options. Given the conversations I had with people while I had this car on test, the Arteon is evidently not a known quantity as yet, so in summary, it sits above the Volkswagen Passat in the line-up, effectively replacing the old Passat CC, which morphed into the CC. This time around it aims higher up the automotive food chain. While there are 2.0-litre diesel engine options for the Arteon, and an entry-level 1.5-litre TSI petrol, under the bonnet of our test car is a turbocharged 2.0-litre petrol unit, sending 190hp and 320Nm of torque through a seven-speed DSG transmission to the front wheels.

Have you looked at the pictures? The Arteon is a genuinely gorgeous piece of design and that is emphasised in R-Line specification and double underscored when painted in the Chilli Red metallic. That's offset against optional 20-inch 'Rosario' alloys, which fill the arches well, though the standard 19-inch rims aren't exactly puny, and they would no doubt enhance comfort a tad. Saying all that, the Arteon looks great even in its lowliest specification.

The sense of occasion continues as you open the doors, as they're all frameless and, while the dashboard isn't anything as interesting as that of the new Touareg's, it's well put together and there's a huge amount of rear space. Anyone expecting the swoopy styling to seriously compromise on practicality like the old CC did will be in for a pleasant surprise.

Last, but not least, this Arteon is seriously refined and comfortable in Comfort mode, with perhaps just a tad too much road noise at times, probably due to the lower profile tyres fitted to the optional alloy wheels.

This is not a sporty car. Now, that shouldn't be a criticism as such, as we have enough sports saloons in the market with scalpel-sharp driving dynamics, and not enough manufacturers focusing on what most people want - i.e. comfort. The standard Arteon is a fabulously comfortable contrivance (as is this car to a point), but when you start painting it bright red, bolting broody alloys on and specifying an R-Line body kit and turbocharged petrol engine, it lifts expectations a tad. And while it won't win many traffic lights Grand Prix, this Arteon has sufficient performance, especially in Sport mode for the throttle response and transmission. Volkswagen Ireland also fitted the optional adaptive damping to this car (buyers can't choose the larger wheels without also specifying it) and the dampers in their firmest setting, could never be called uncomfortable. Nonetheless, neither does it suddenly transform the chassis into one you'd seek out an interesting road for. The body control is fine, but not exceptional, and while the steering firms up, it's still relatively slow, so most buyers will likely leave the driving mode in the default setting - and that's where the car is at its best.

The idea of a relatively efficient petrol-powered Arteon that is also quiet certainly is appealing, but perhaps sticking with the standard comfort-oriented suspension and wheels, as this particular car compromises on the Arteon's core values. On looks alone, however, the Arteon is a five-star car and, as standard, it's spacious, special and comfortable on the road, regardless of what powers it.

On paper, the petrol engine would seem to suit the Volkswagen Arteon better than a diesel one. However, it delivers refinement rather than outright pace. As much as the look of the Arteon would have you believe (it aesthetically outshines the Passat), it's a car that is more about the show than go. 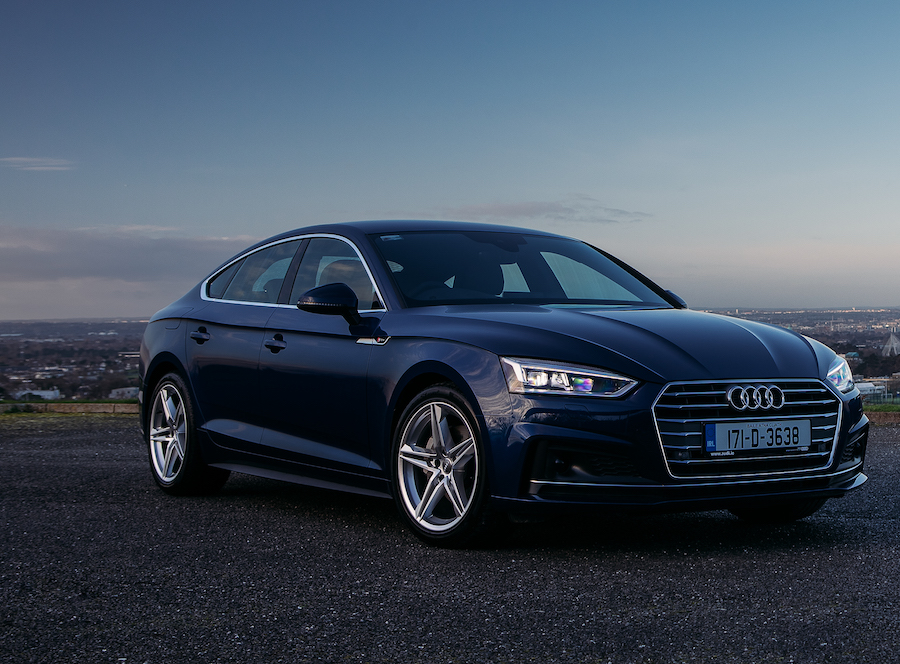 Audi A5 Sportback review
Audi A5 Sportback vs. Volkswagen Arteon 2.0 TSI petrol 190: is tauter than the Arteon in handling terms, but the Volkswagen is more comfortable in return and far more spacious. Closer contest than you might expect, especially as the A5 can be had with the same 2.0 petrol engine. 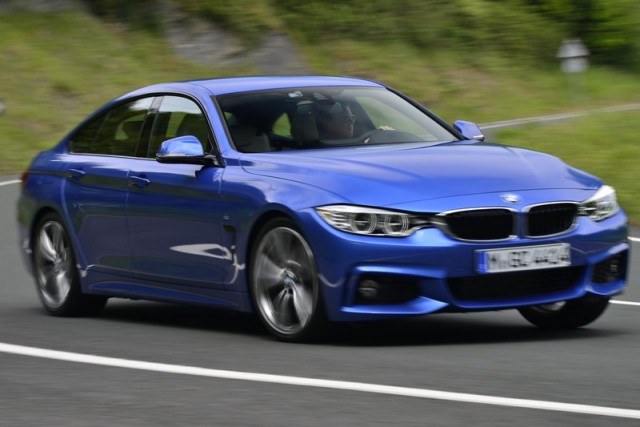 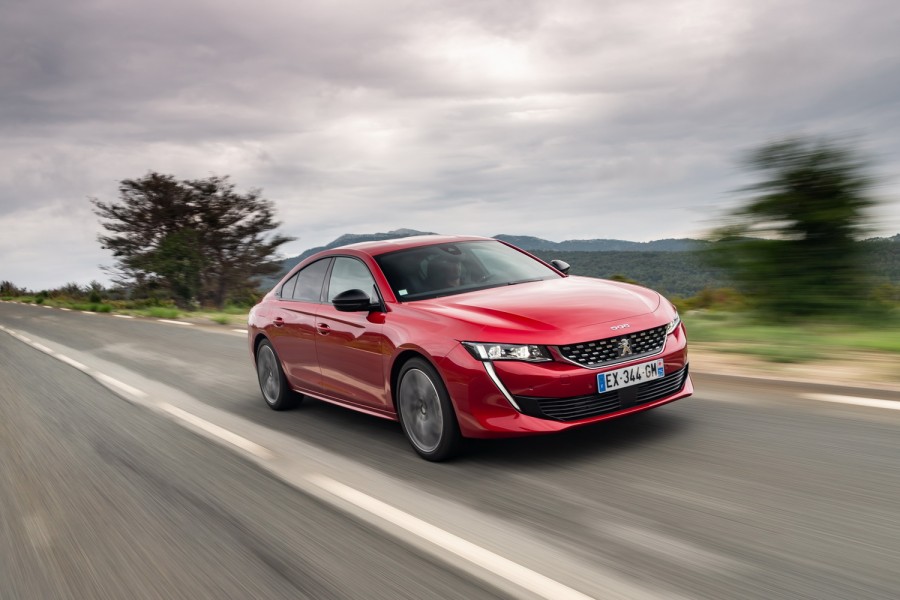