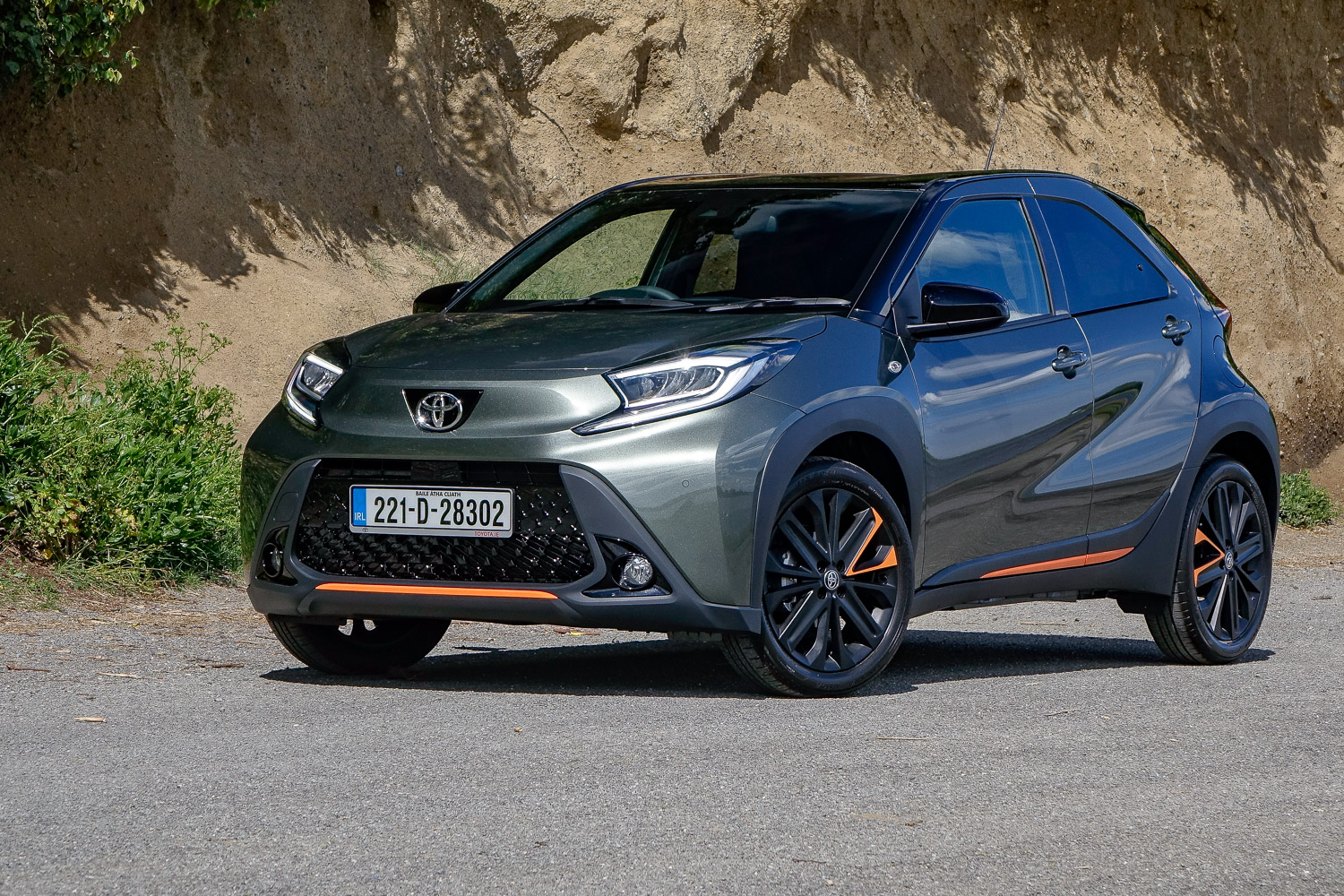 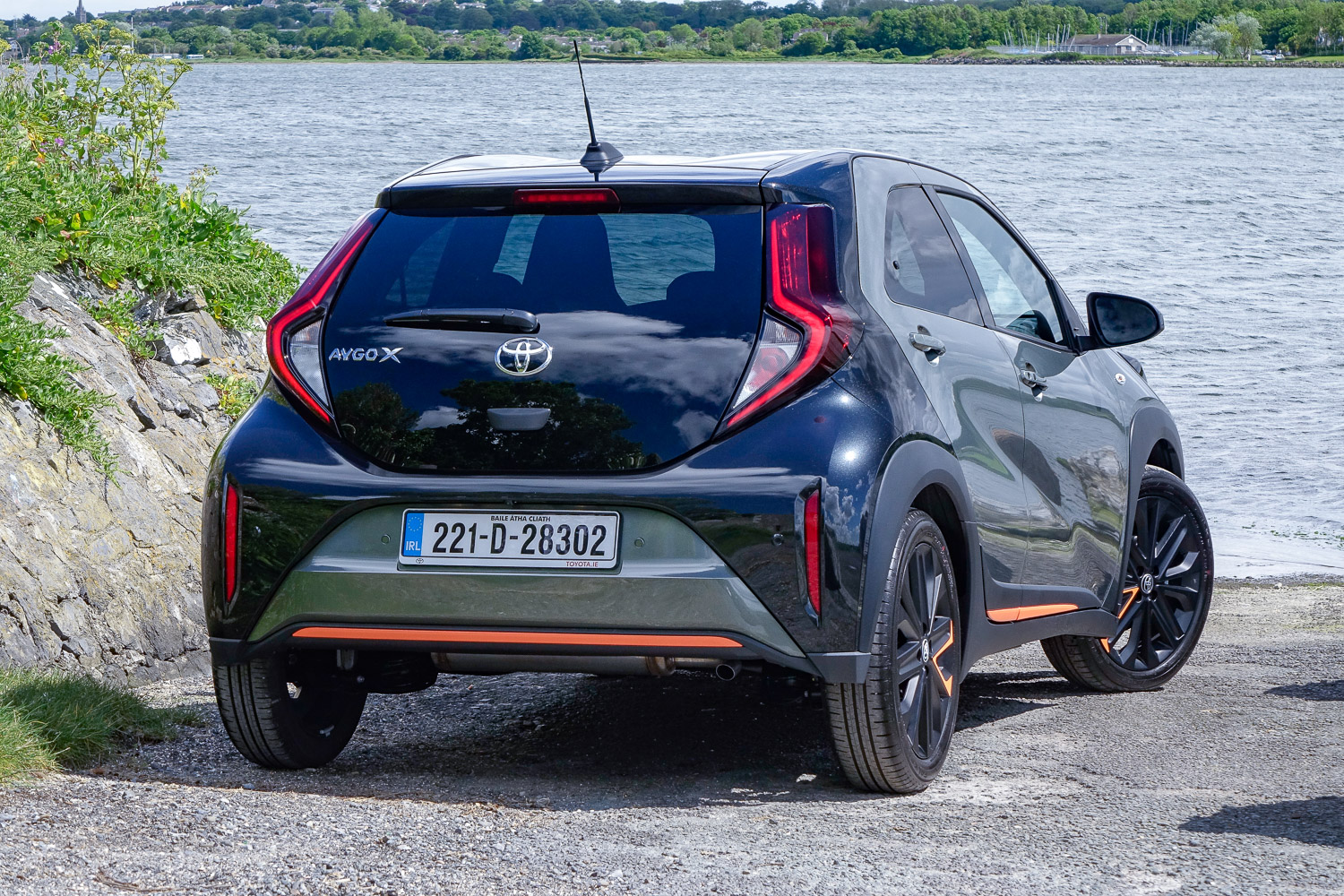 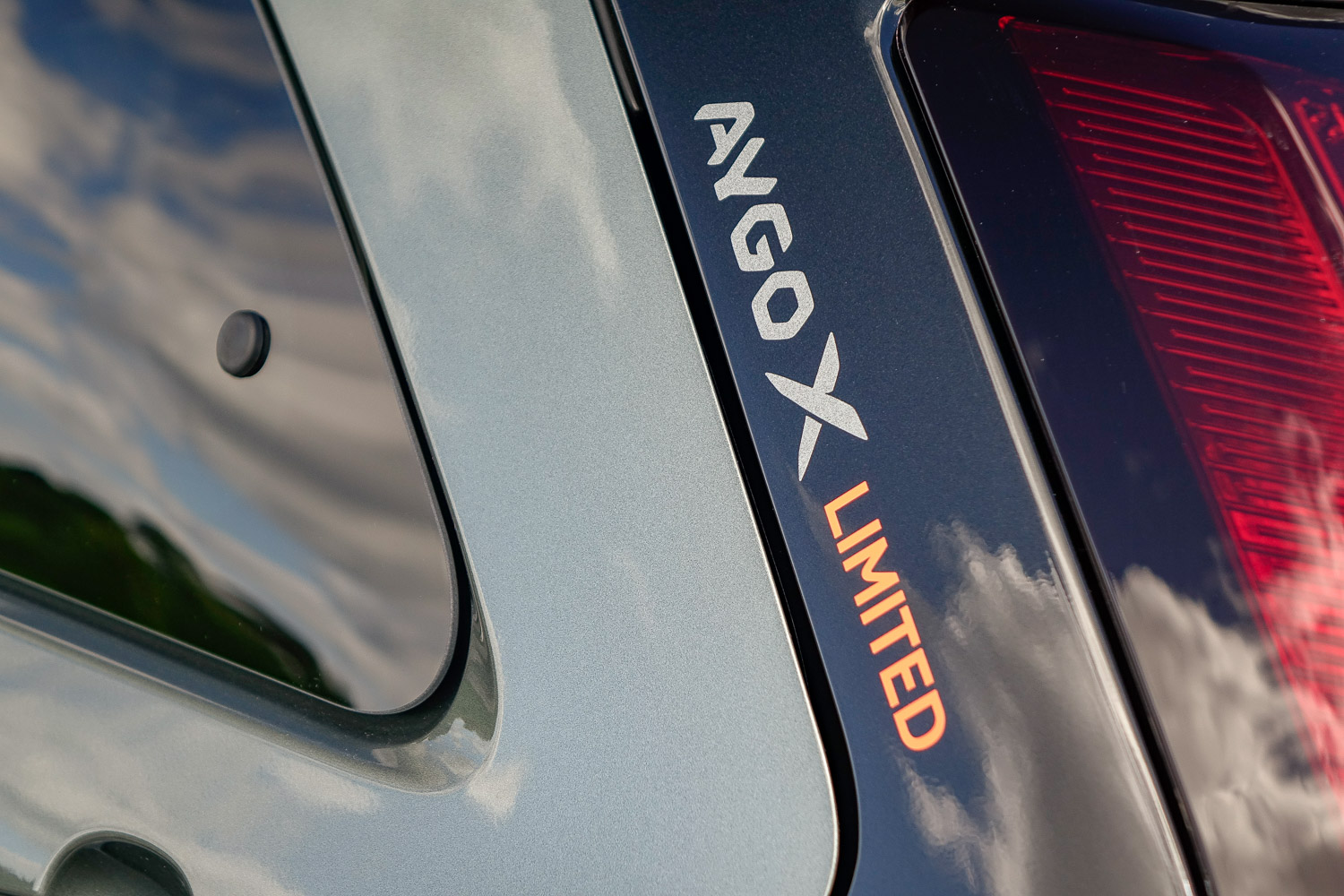 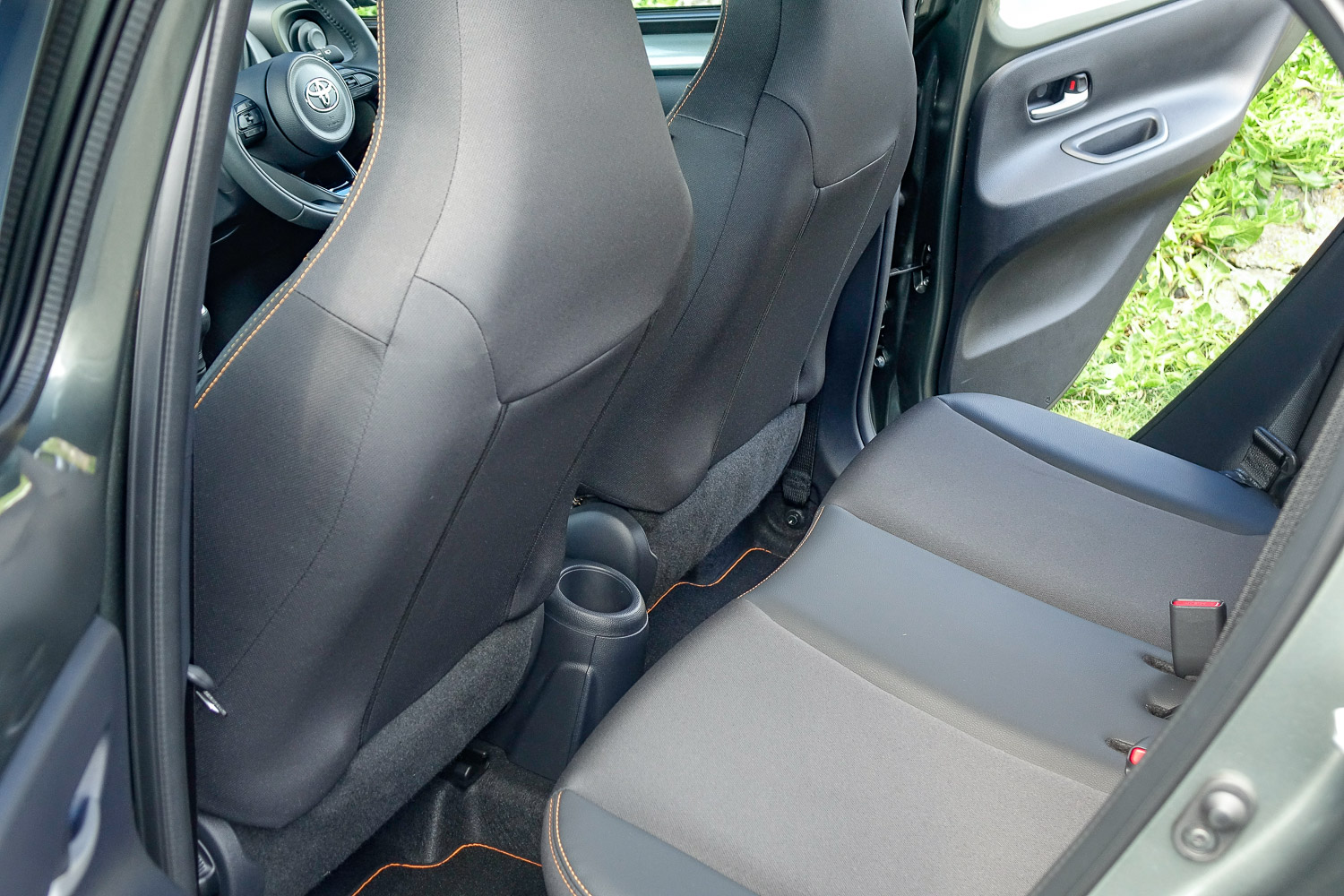 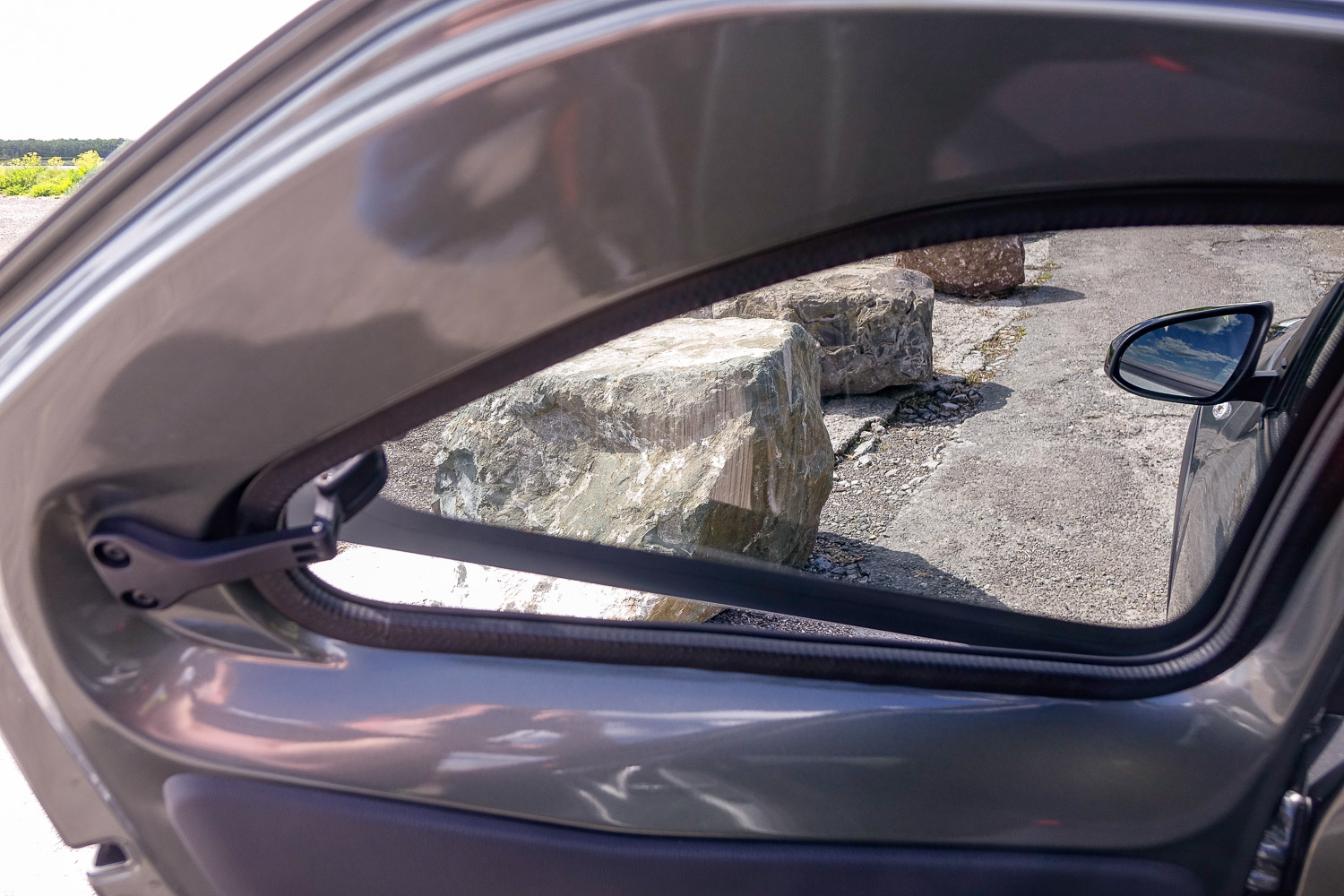 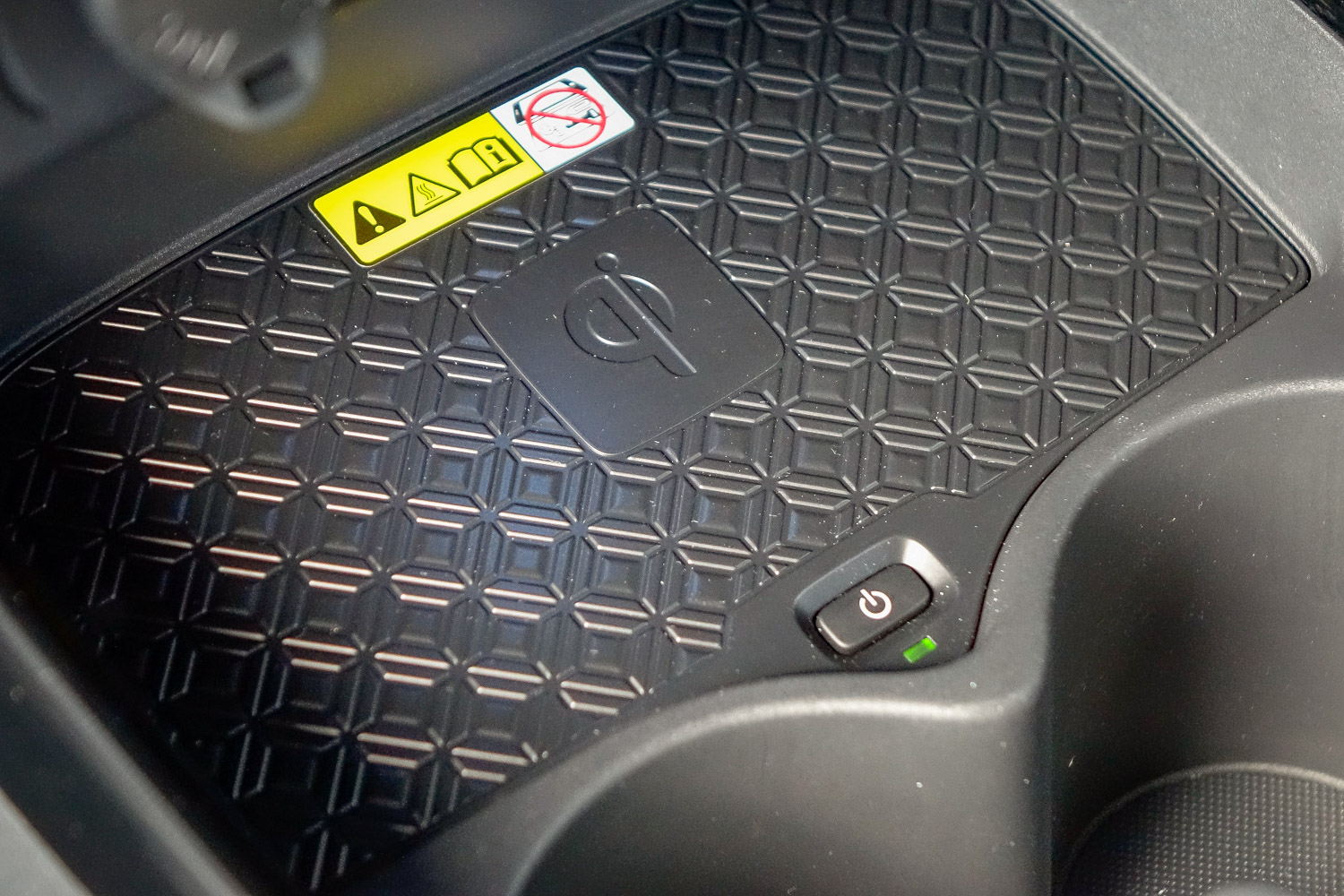 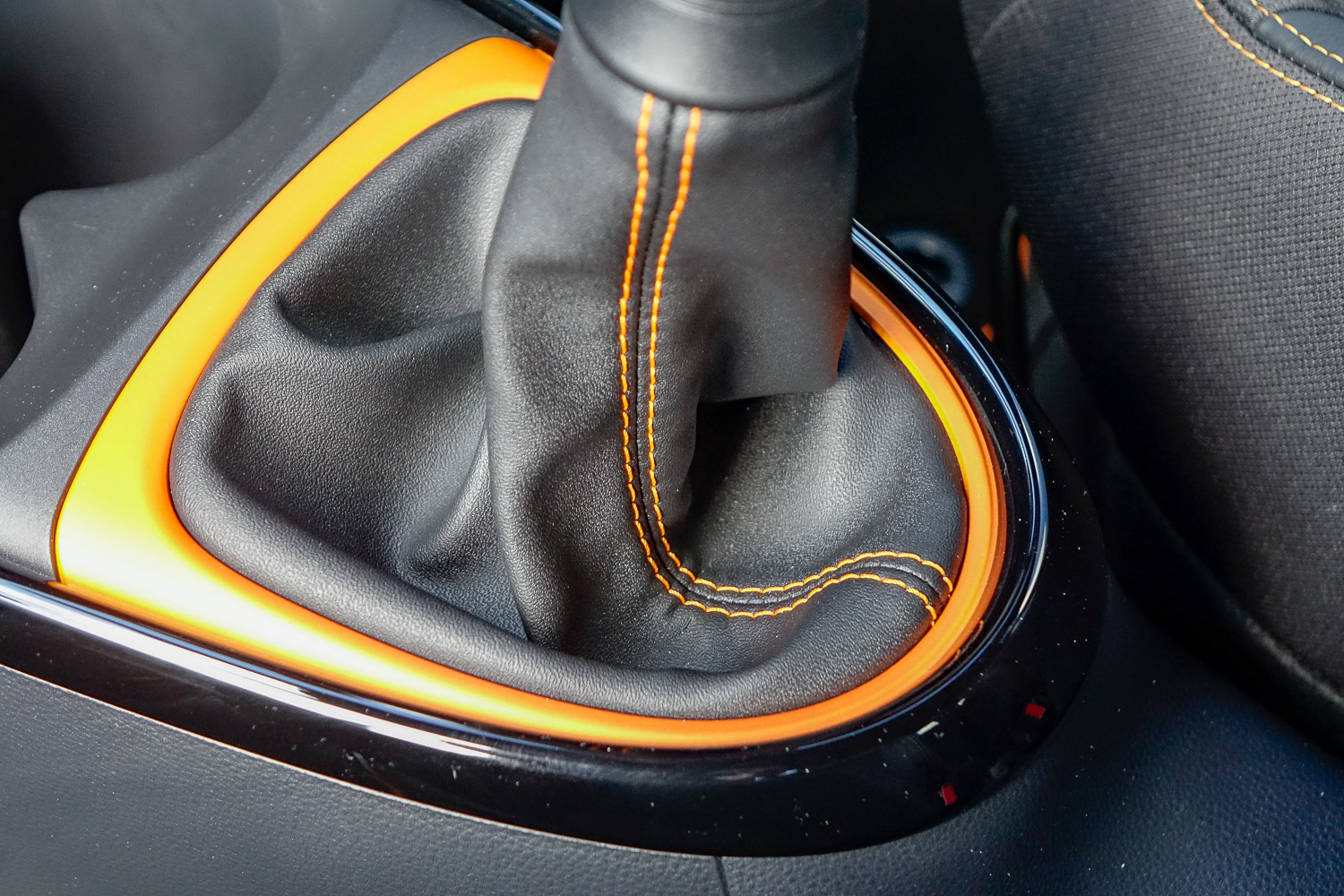 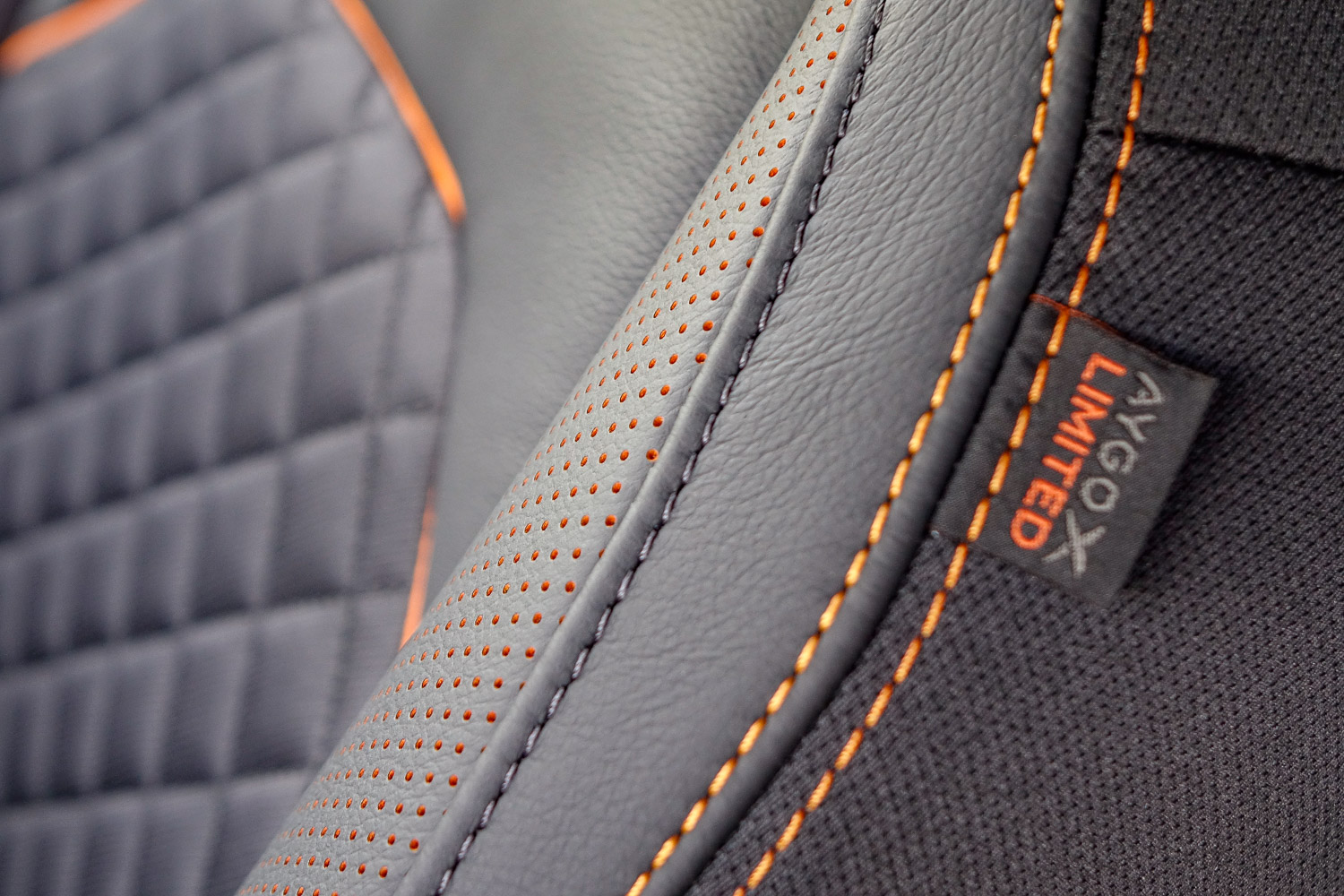 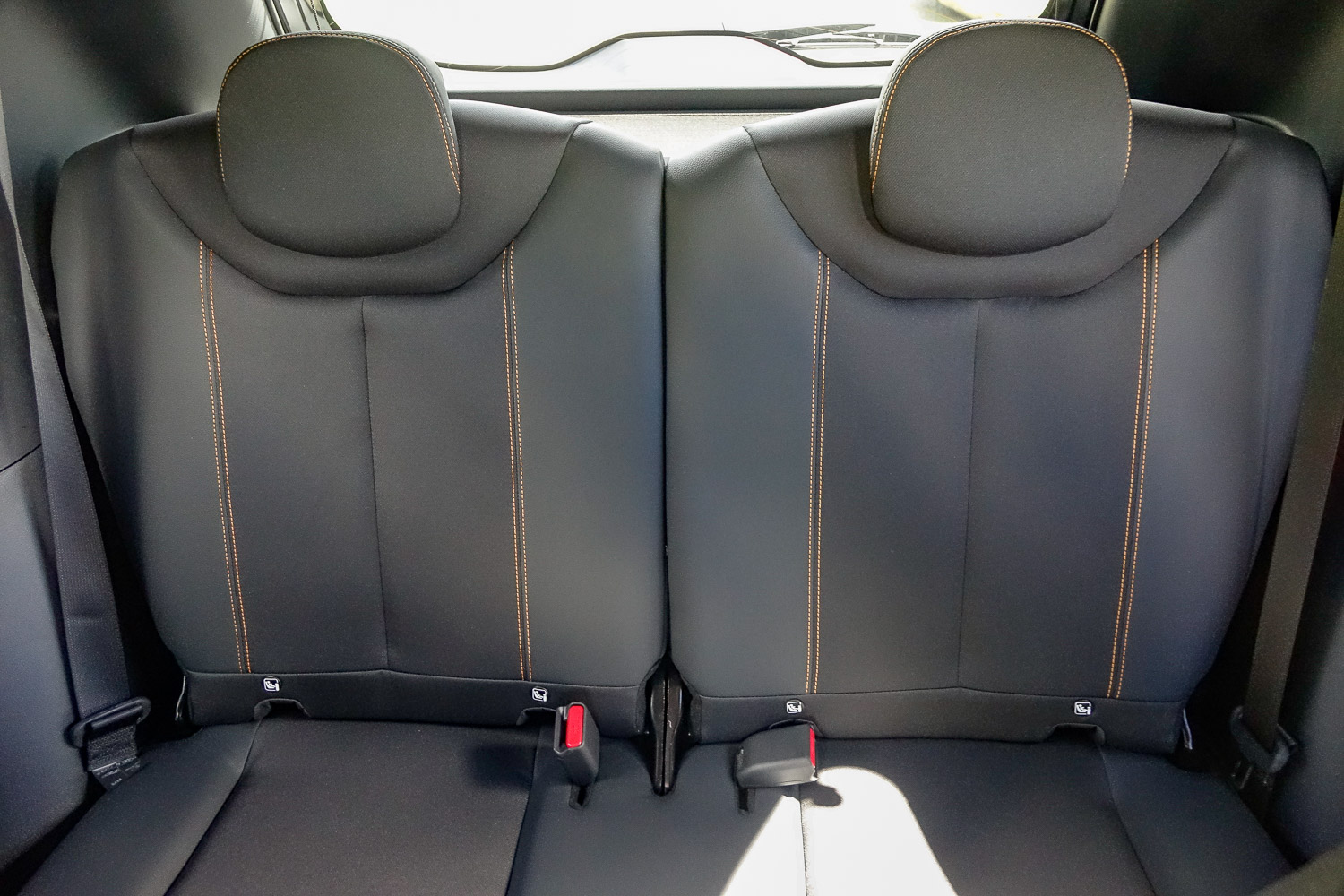 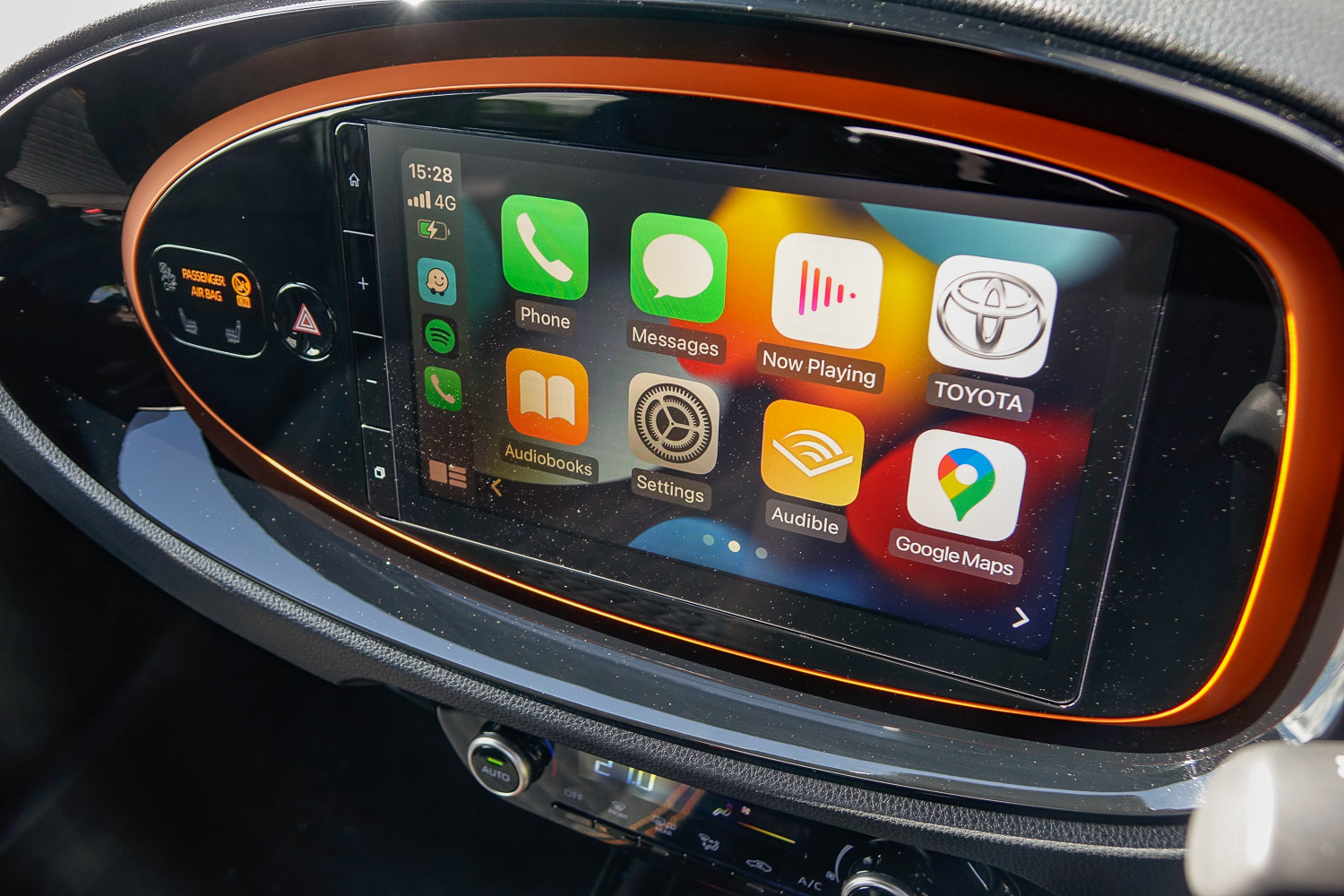 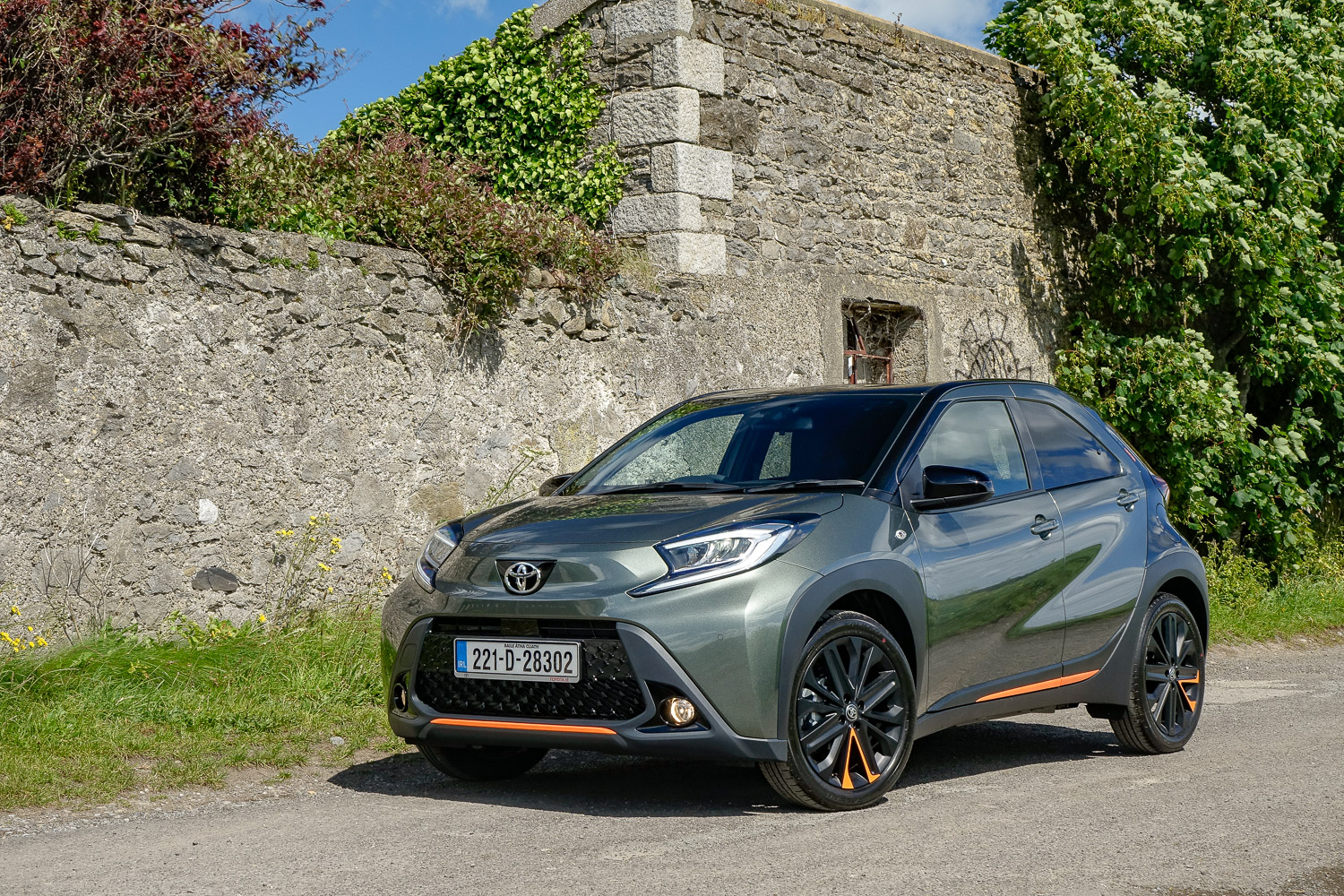 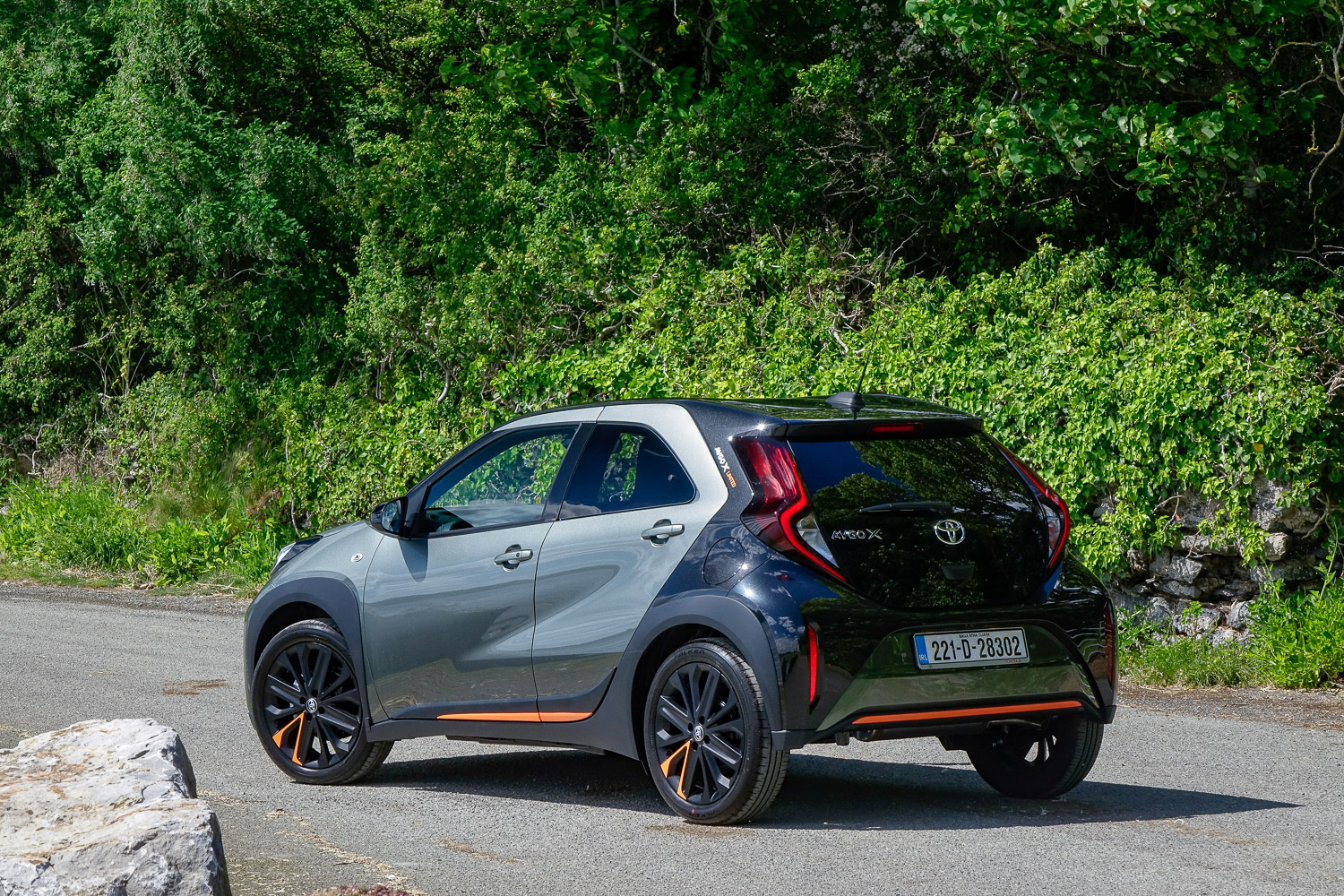 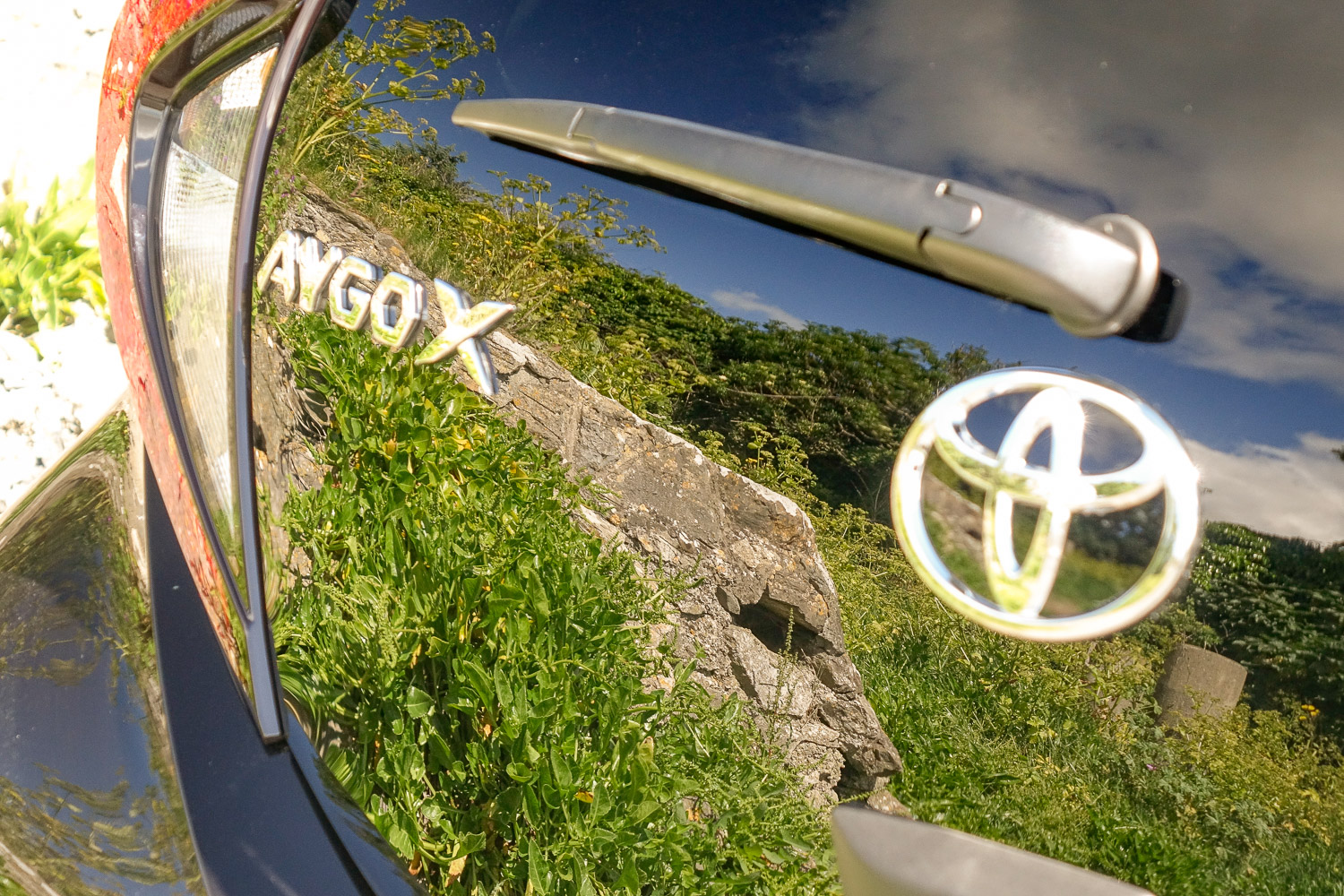 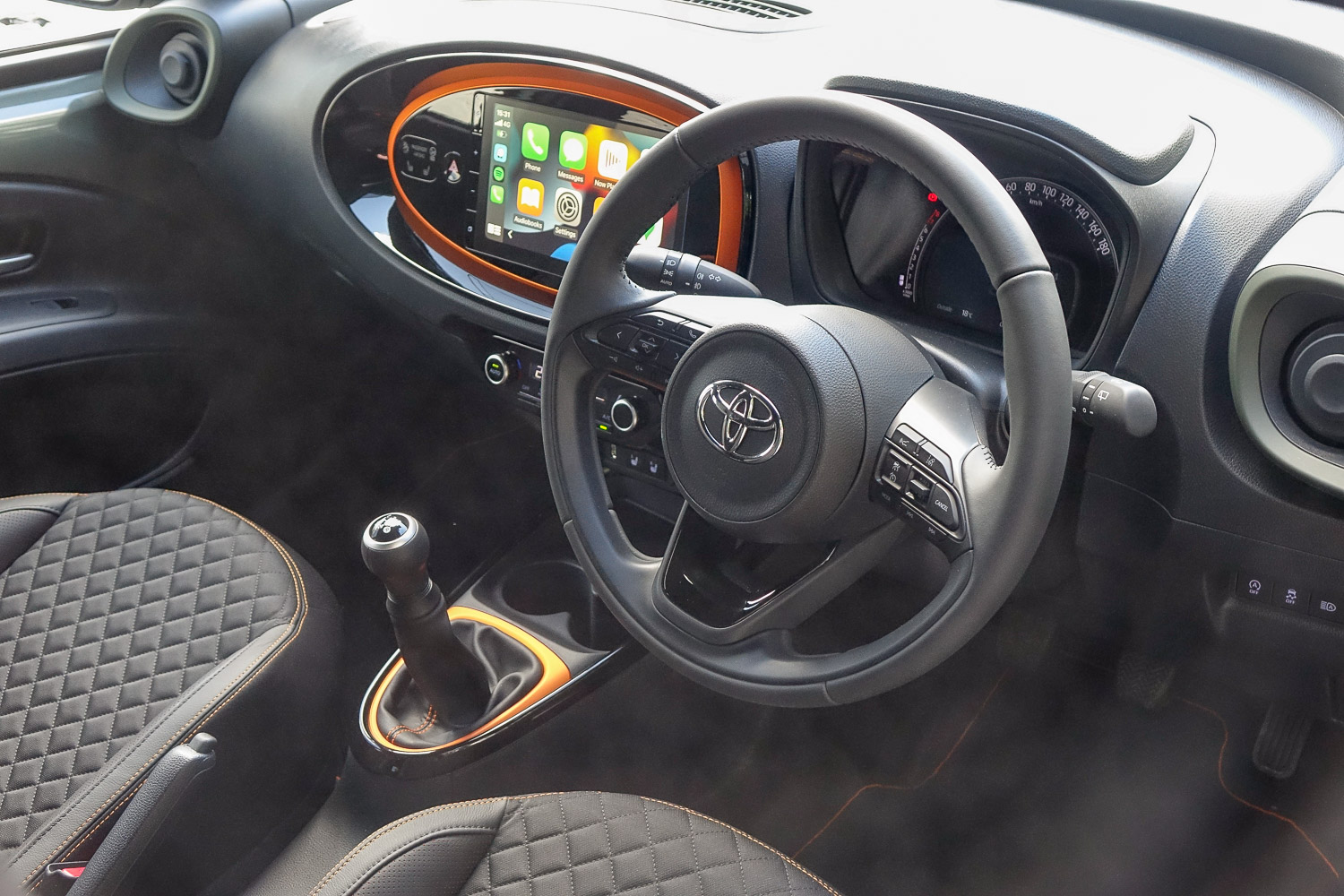 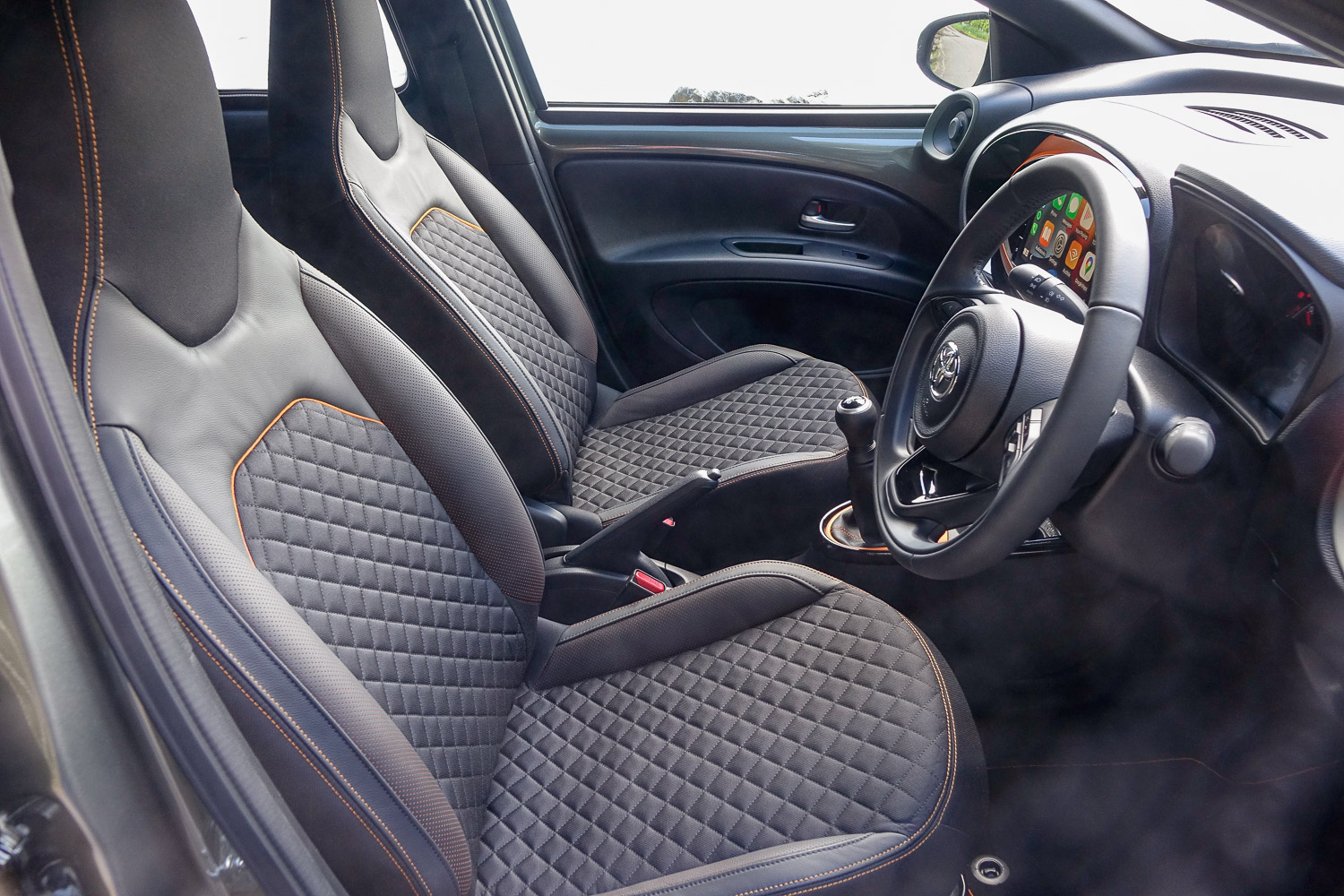 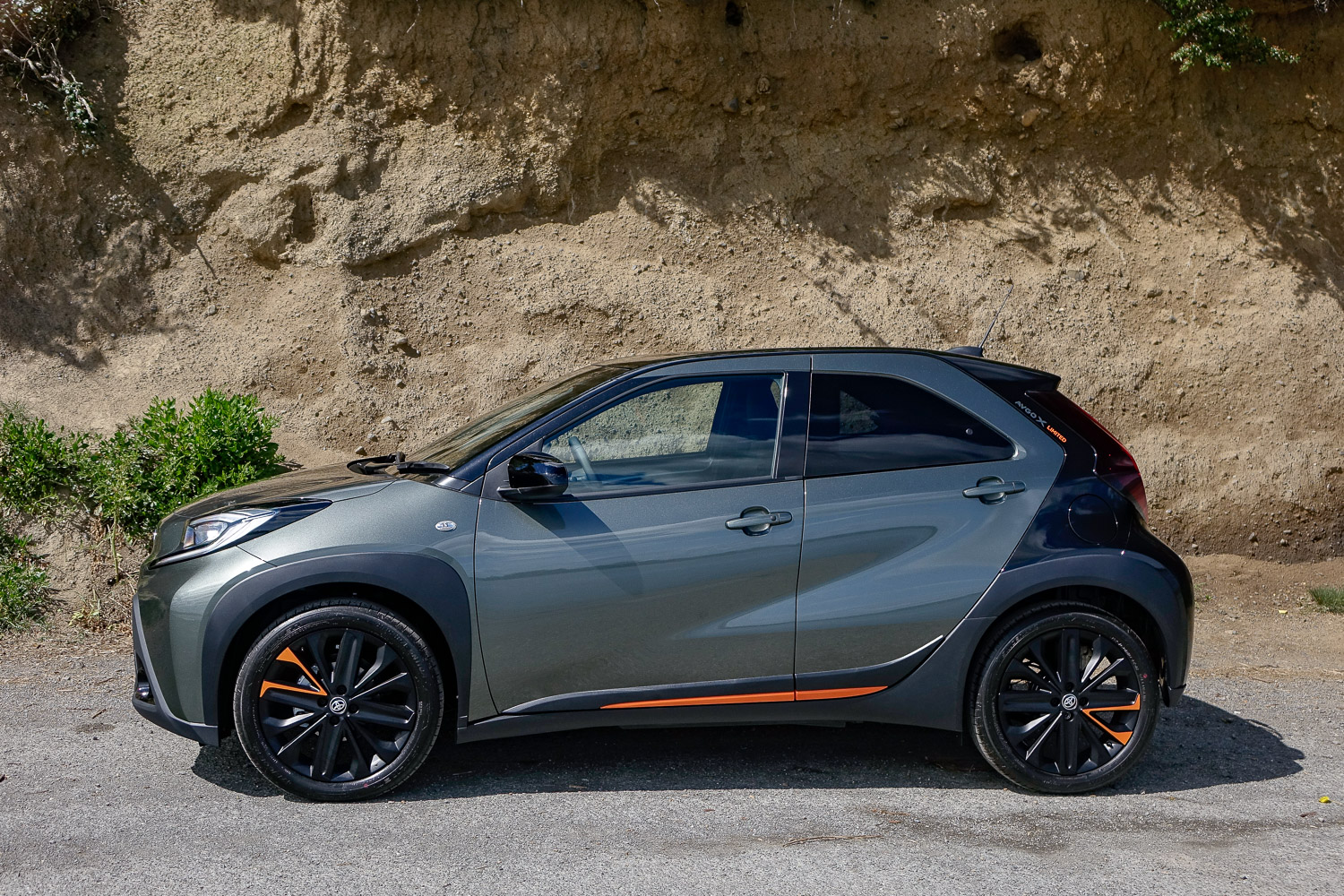 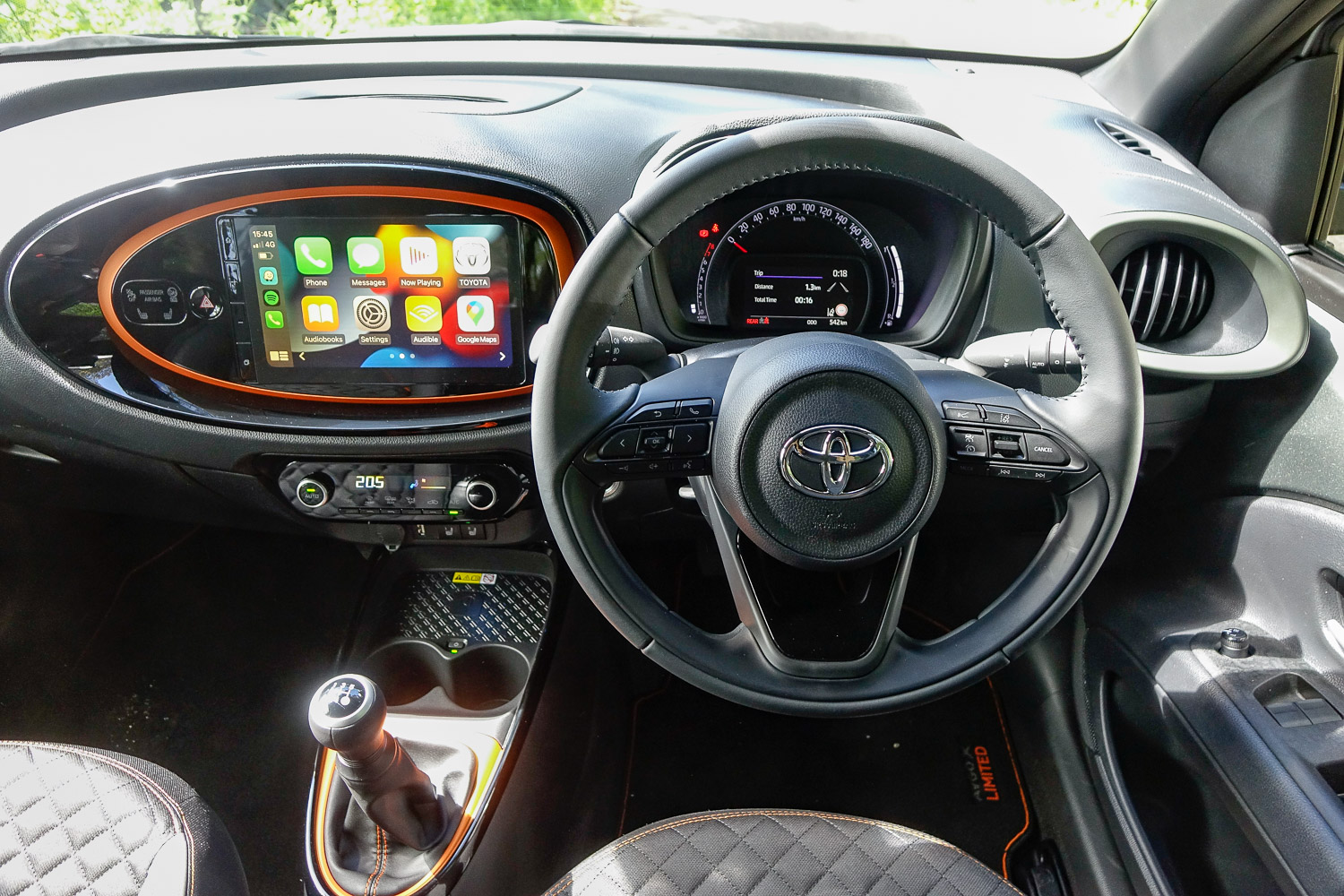 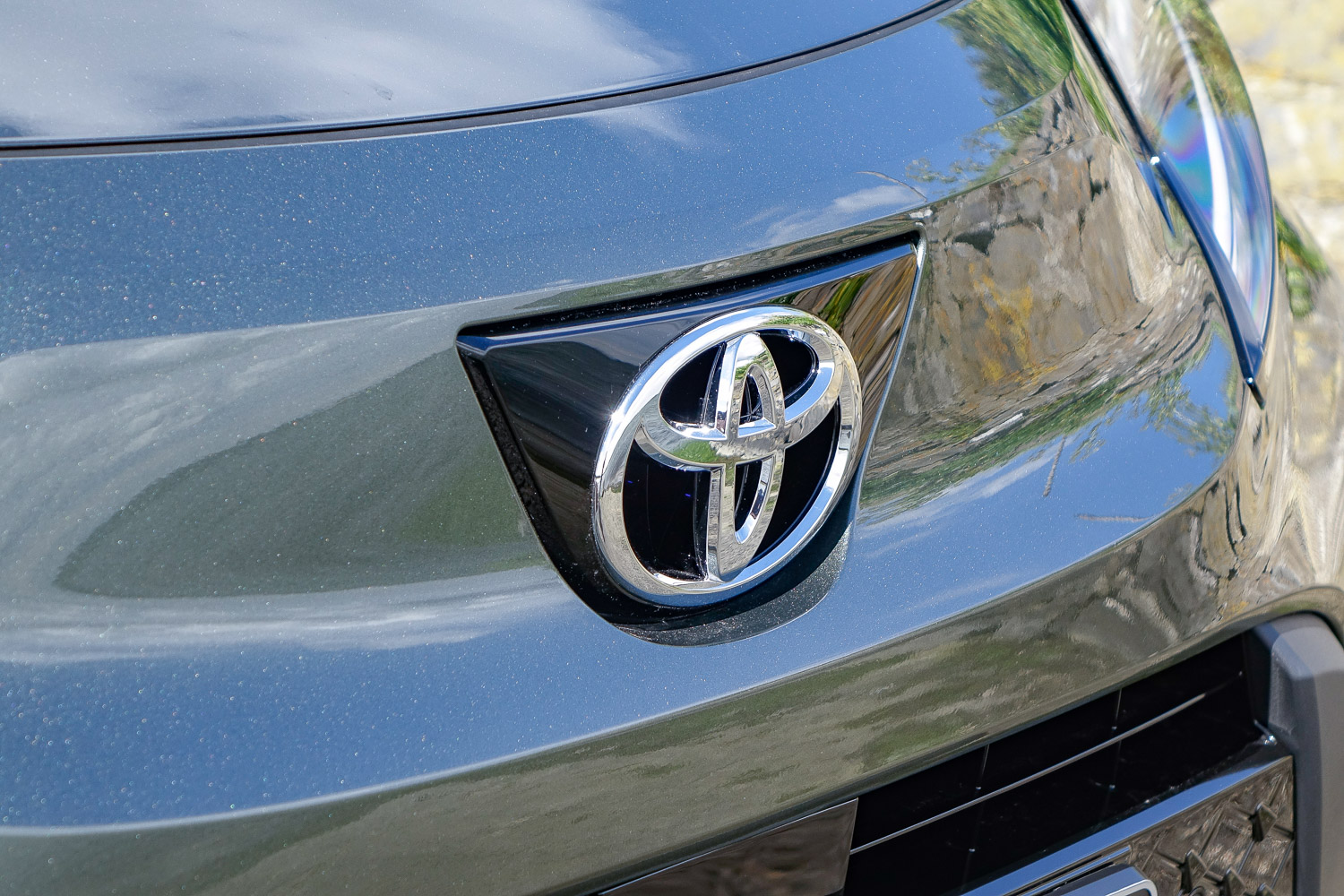 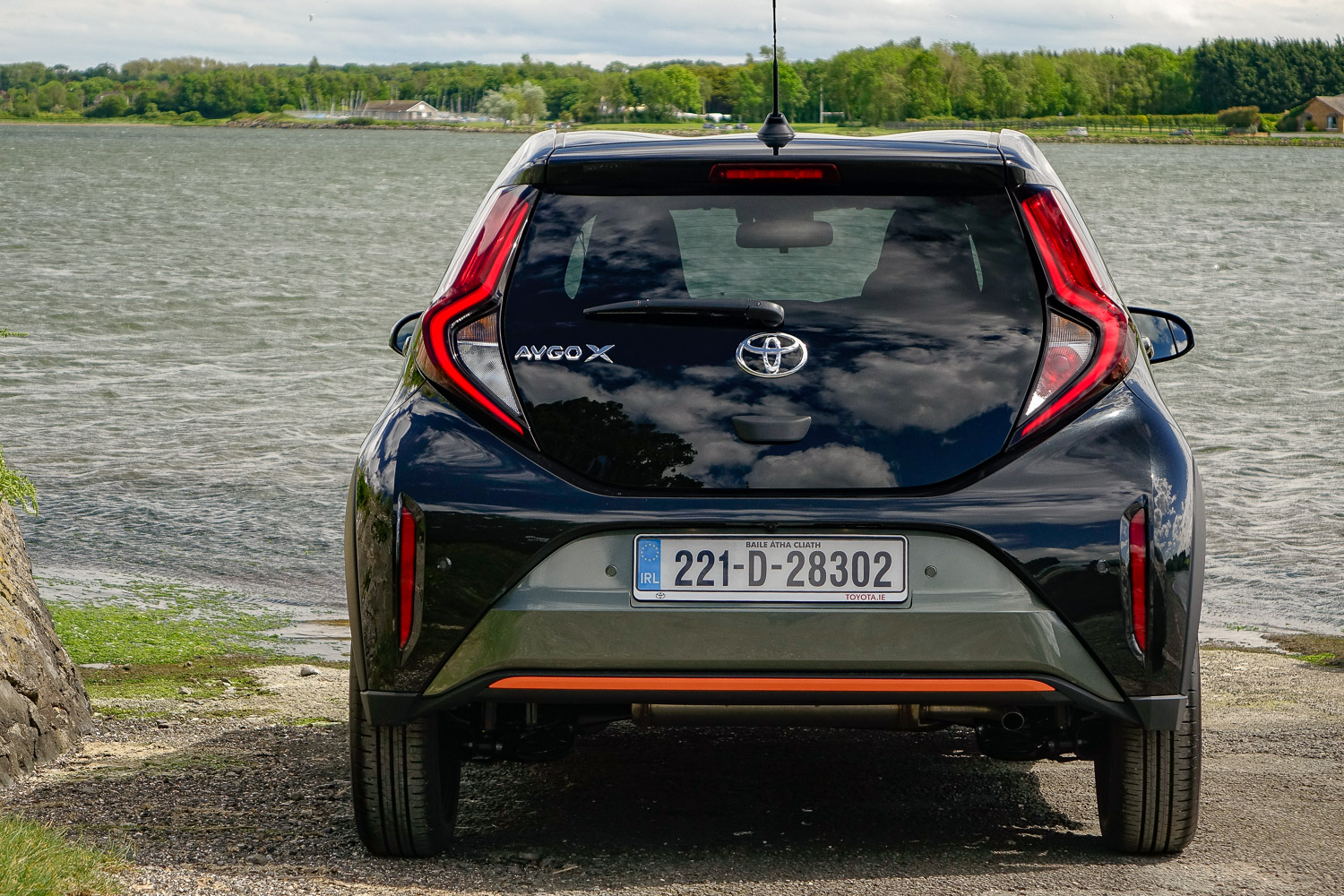 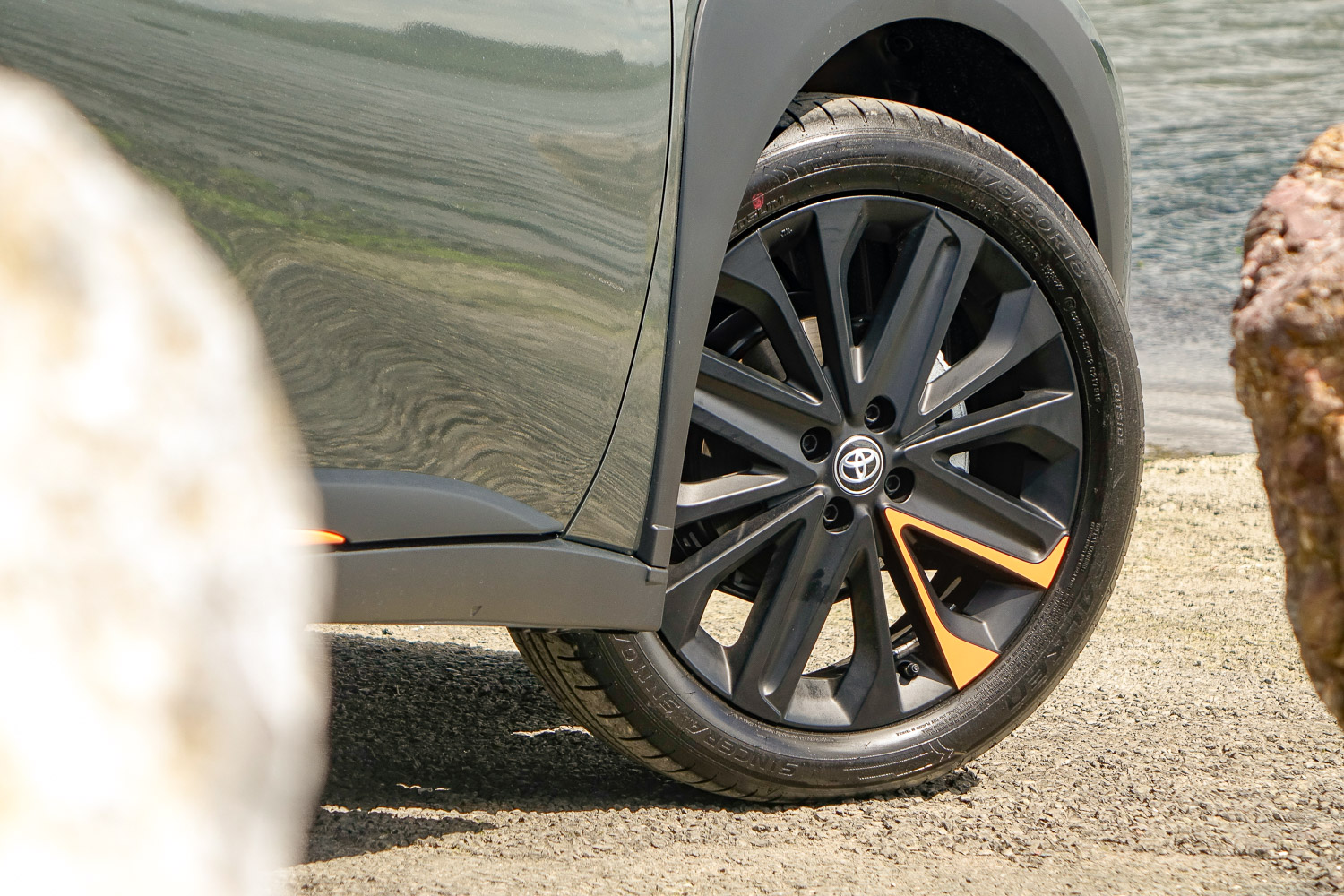 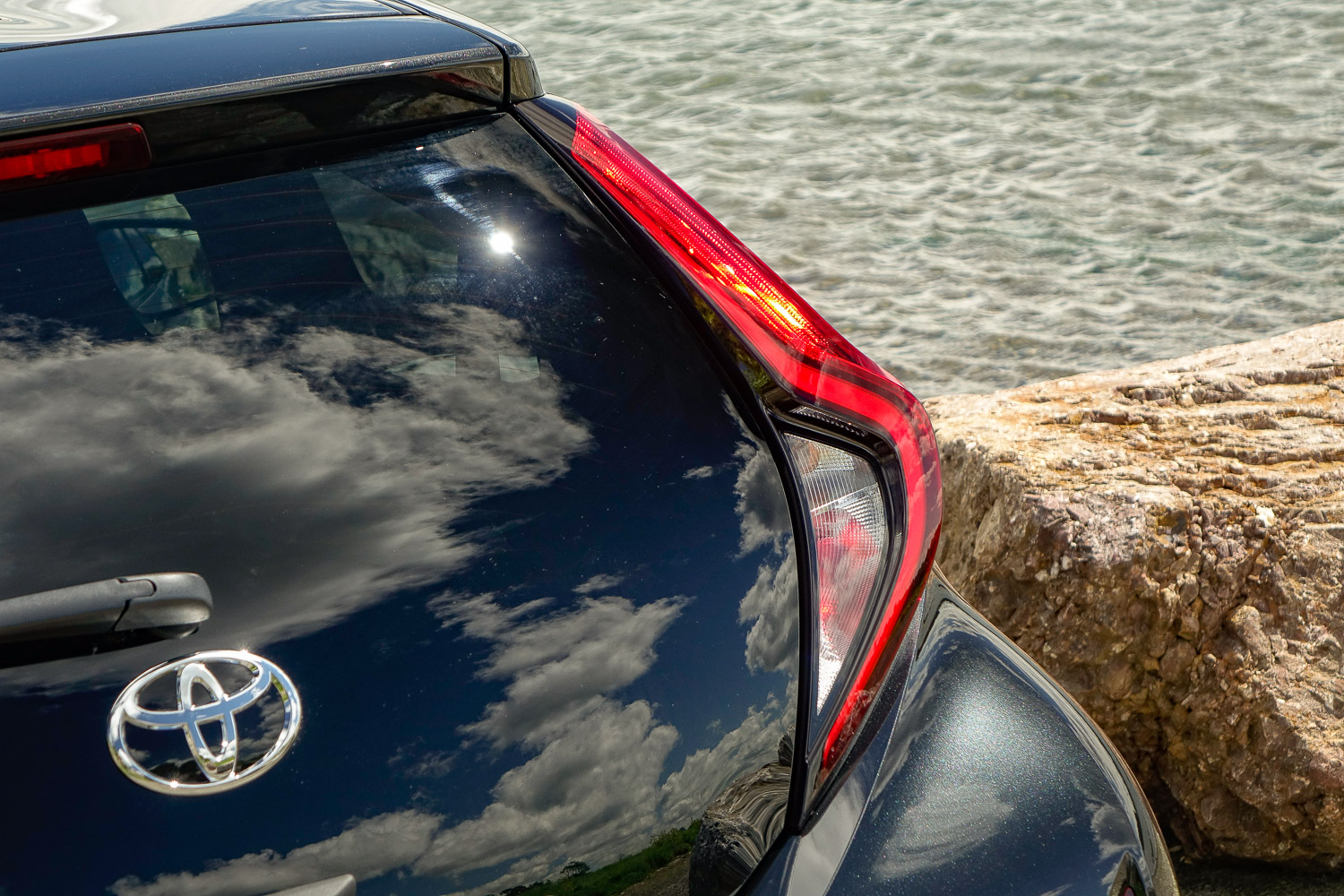 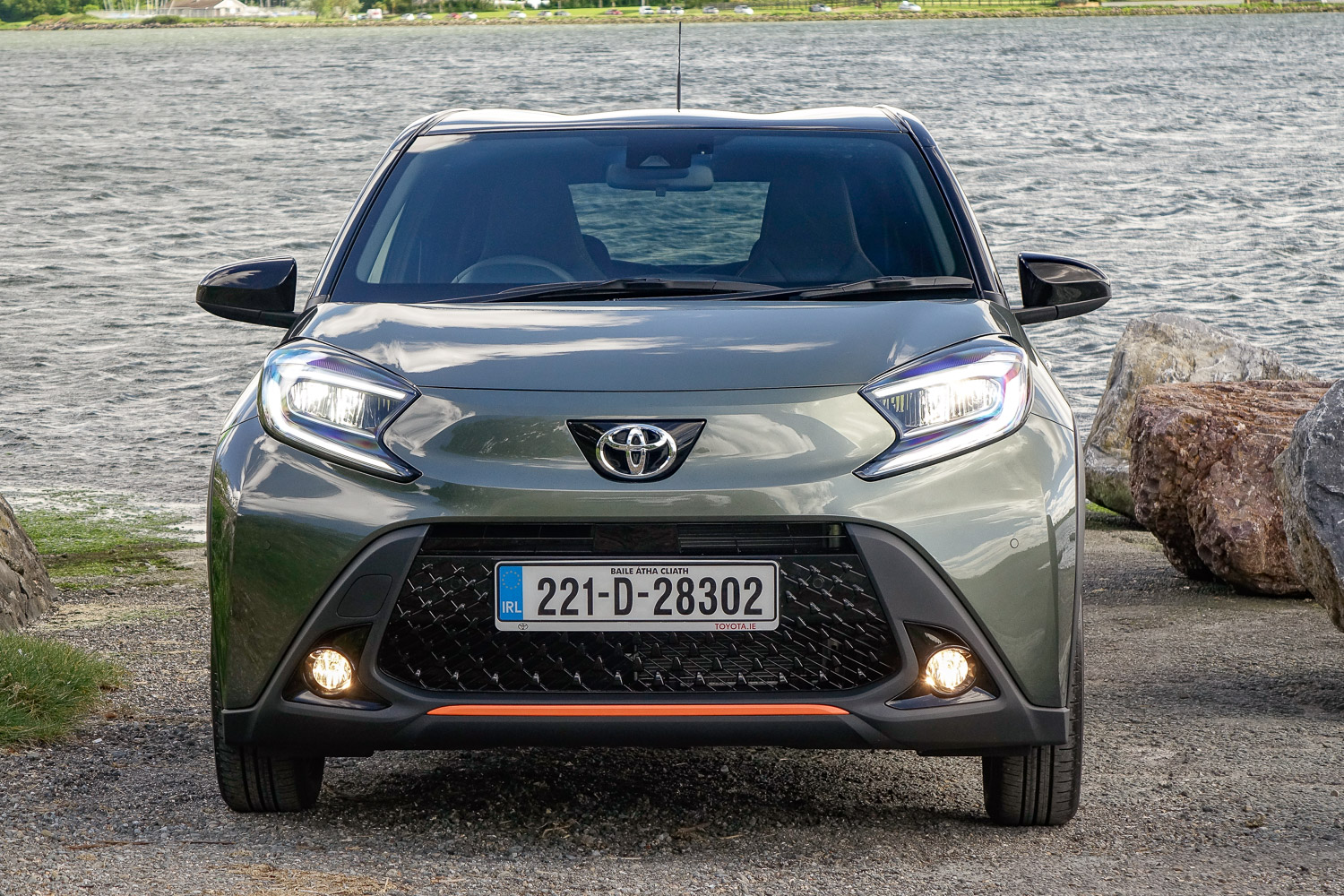 Toyota has taken its ever-popular Aygo city car and given it a trendy 4x4-ish makeover. To call it a crossover is stretching credulity ever so slightly, but it is taller and chunkier than the previous Aygo, even if at heart it's still a frugal 1.0-litre city car.

It's chunkier to look at, with a genuine sensation of looking like someone has shrunk an SUV in a boil wash (especially in the dark green paintwork of our test car). It's a far more desirable looking car now than the shy and retiring Aygo of old.

The Aygo X line-up starts with the Pulse model, priced at €18,325 and using the same 72hp 1.0-litre petrol engine as the rest of the range. Standard equipment includes a seven-inch infotainment touchscreen with Apple CarPlay and Android Auto; a tyre repair kit in place of a spare wheel; 17-inch alloy wheel and a rear spoiler; heated and power-adjustable door mirrors; a rear-view camera; and Toyota's Safety Sense 2 system, which includes pre-collision braking with pedestrian and cyclist detection, lane-trace steering, road sign recognition, automatic high-beam and radar-guided cruise control. That's an impressive list of safety kit for what is a basic model. You are restricted to just three paint choices on the Pulse, though - Pure White, Atomic Silver or Night Sky Black.

Next up is a €19,500 Design model, which comes with a contrast roof colour; upgraded seat upholstery; the option of a CVT automatic transmission; rear privacy glass; Piano Black exterior trim; a vanity mirror for the driver's side sun visor; and an eight-inch touchscreen.

For €21,190 you can get an Aygo X Envy, and that will come with 18-inch bi-tone alloys; LED headlights; climate control; rain sensing wipers; a nine-inch touchscreen that comes with the much-improved Toyota Smart Connect software; wireless phone charging and connection; blue ambient cabin lighting; and some body-colour interior trim pieces.

At the top of the range sits our €23,230 Limited test car - this comes with 'Cardamom Green' paint with a contrasting black roof and C-pillar; 18-inch matt-black alloys with orange inserts; front and rear parking sensors; keyless entry and ignition; part-leather trim; and heated front seats.

All manual Aygo X models have CO2 emissions of either 109- or 110g/km, while the CVT automatic raises that to 113g/km.

The Aygo X is currently available on a 3.9 per cent APR PCP plan, with monthly repayments starting from €142, but be sure to check out the Toyota Ireland website for the most up-to-date offers.

The Aygo X looks and feels like a cut above its predecessors in the cabin, particularly in the front. While there are some harder plastics on show (as is the norm in the sector), overall quality is excellent, and the design shows some flair. That's especially true of the big elliptical sweep in the centre of the dash, which houses the infotainment touchscreen. In our Limited test car, that screen uses Toyota's latest-generation software that is far more satisfying and simpler to use than older versions.

In front of the driver, there's a simple sweeping arc of an analogue speedometer, although to be honest you're as likely to use the digital display, mounted just below, more of the time. That display can show the speed, trip computer, media and music choices, and is controlled by buttons on the chunky, three-spoke steering wheel. The rest of the steering wheel buttons control the radar-guided cruise control.

Below the screen, on the centre console, there are neat and simple physical heating and air conditioning controls, and beneath them, on our test car at any rate, a pair of switches for the heated seats. Next to those, you'll find a USB port and a 12-volt socket.

Below the console, there's a shallow storage area that's also home to the wireless phone charger, and a pair of cupholders. Behind that is the manual gear shifter, which seems to have been donated by the last-generation Toyota Corolla saloon.

The front seats are generally very comfortable, although can lack a little bit of lower-back support on longer journeys.

In the back of the Aygo X there's no more or less space than in most city cars. If those in the front seat are anything over five-foot-eight then legroom in the back is going to be restricted. Even if you can squeeze in, you'll find it quite claustrophobic - the line of the rear windows sweeps up rapidly, and on top of that those windows don't wind down, they just pop open at their trailing edge. While that might be considered a safety feature if you're carrying young children, the restricted view out will not be welcome. There are no USB ports in the back, but there is a 12-volt socket.

The boot of the Aygo X is larger (at 231 litres) than that of the old model (168 litres), but happily it's still accessed via a weight-and-cost-saving glass panel, rather than a steel boot with a window. The rear seats do split and fold, but only the seat backs fold, leaving you with a step over which to load any bulky objects. The load lip at the edge of the boot is quite deep, too.

Keep the Aygo X in its most appropriate urban environment and it's fine. The little engine has only a modicum of torque but as the Aygo X only weighs 945kg at the kerb, it doesn't have much mass to overcome. So, the Aygo X feels appropriately nippy, and that 1.0-litre petrol engine trills and snarls happily when you rev it hard. In many ways, it's a joy to use.

The ride quality is well-judged - firm enough that the Aygo X doesn't feel loose and floppy, but good at soaking up the worst urban surfaces. Over the shoulder visibility is a little limited thanks to those small rear windows (so the rear-view camera is more helpful than you'd expect in such a diminutive car), but the Aygo's tight dimensions mean that in-town manoeuvring is an absolute joy, and you start to wonder why anyone buys bigger and heftier cars than this.

The answer to that question is: sometimes you have to take on long journeys. The Aygo X is actually fine on a main road or motorway - windy conditions don't seem to faze it, and while it's hardly the most refined thing around, it cruises in relative comfort. There's plenty of wind and tyre noise, but you can turn the stereo up enough to drown out the worst of that.

The problem on bigger roads is quite simply the lack of performance. This Aygo X is fractionally faster to 100km/h than the old model, but not enough for it to feel powerful enough for bigger roads. Try to accelerate in fifth gear on the motorway and... nothing much happens. In fact, on long inclines, even with your foot planted to the floor, you'll often feel the Aygo slowing down. It's just not optimised for long motorway drives.

The Aygo X is also a touch thirsty in such scenarios. Not by general standards - a return of 5.7 litres per 100km in our hands against an official 4.8 litres per 100km is not bad at all by any standards, especially given that we undertook two long motorway runs that took the Aygo X well and truly out of its comfort zone - but it reveals that the engine has to work hard under such circumstances.

Our verdict on the Toyota Aygo X

The Aygo X is not the Toyota Aygo you knew. It's bigger - both physically and in price terms - and bolder, but it's not the super-affordable run-around it once was either, and that's a bit of a shame. That said, we do like the new style, and the Aygo X is suitably useful and fun-to-drive around town. Plus, being a Toyota, it should prove to be thoroughly dependable.

Unlike Neil, I spent very little of my time in the Aygo X on the motorway - and I would suggest it's for drivers that do the same. Its lack of performance isn't an issue around town, or even on an interesting back road, where its low weight makes it quite fun to drive. The baby-crossover looks charmed me, too, while I found the interior to be superior to those of most other city cars on the market, mixing style with a great specification (admittedly in our top-spec test car). Think of this particular one not as a cheap-as-chips city car, but a cool small car that is perfectly proportioned for city life - yet it doesn't sacrifice desirability for that remit. 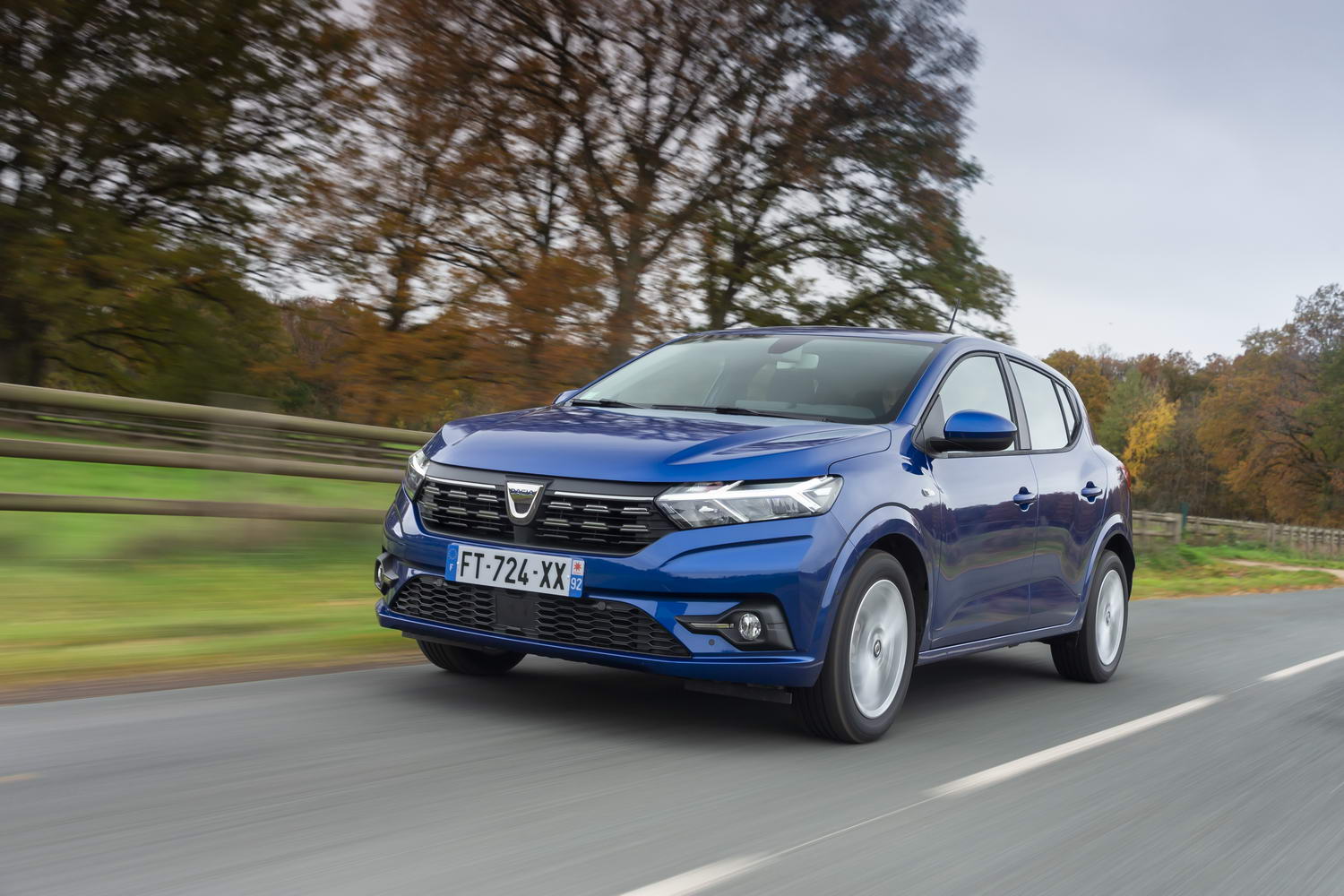 Dacia Sandero 1.0 Essential (2021) review
Dacia Sandero vs. Toyota Aygo X Limited (2022): the Sandero is significantly cheaper in base form than the Aygo X, and much more practical with bigger back seats and a larger boot. OK, so it doesn't look as cool, but it's a better all-rounder for less cash. 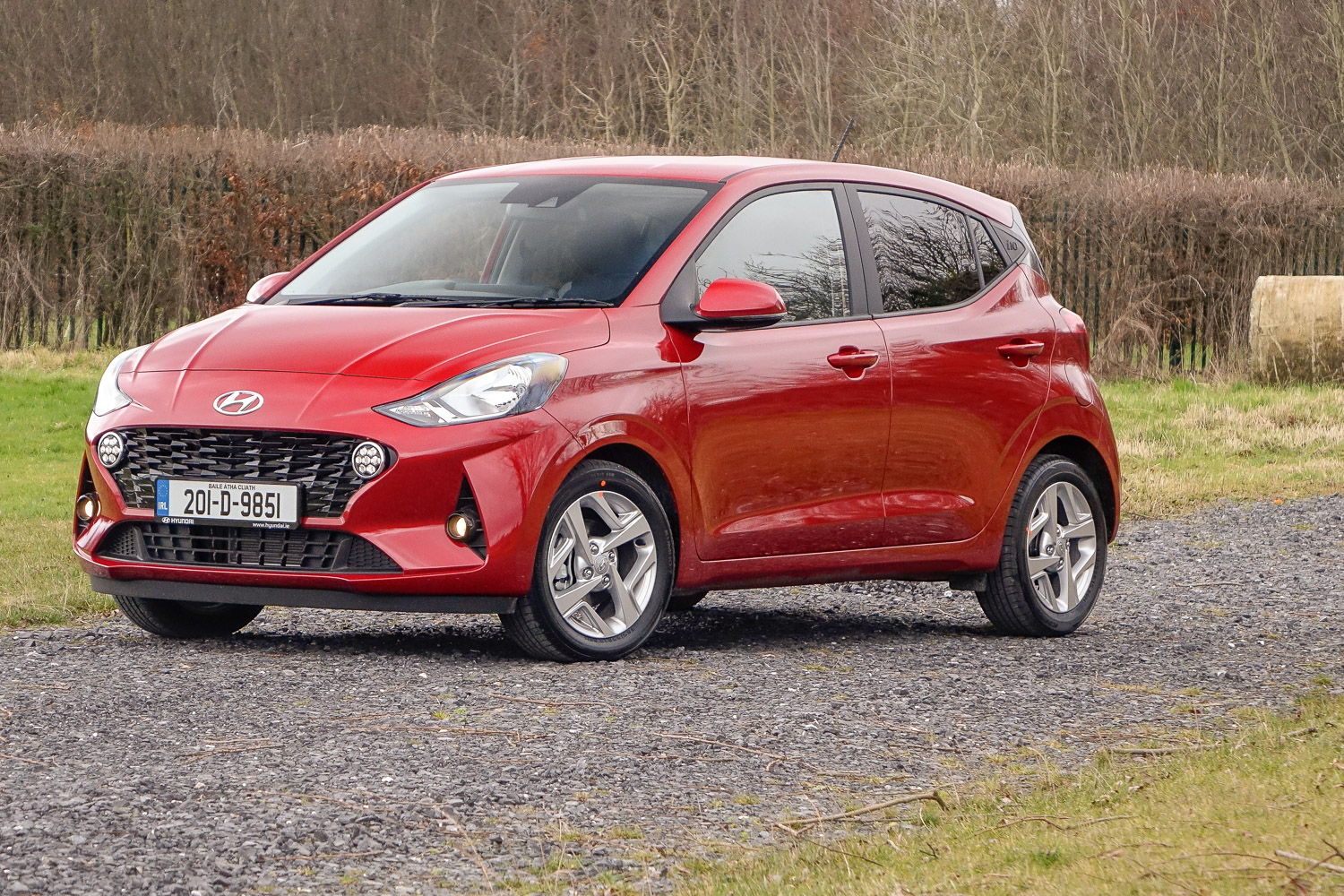 Hyundai i10 1.0 (2020) review
Hyundai i10 vs. Toyota Aygo X Limited (2022): the Hyundai uses a simpler, although still eye-catching, hatchback design than the quasi-crossover Toyota, and there's decent space in the cabin too. The i10 isn't a huge amount of fun to drive, but it's simple and frugal. 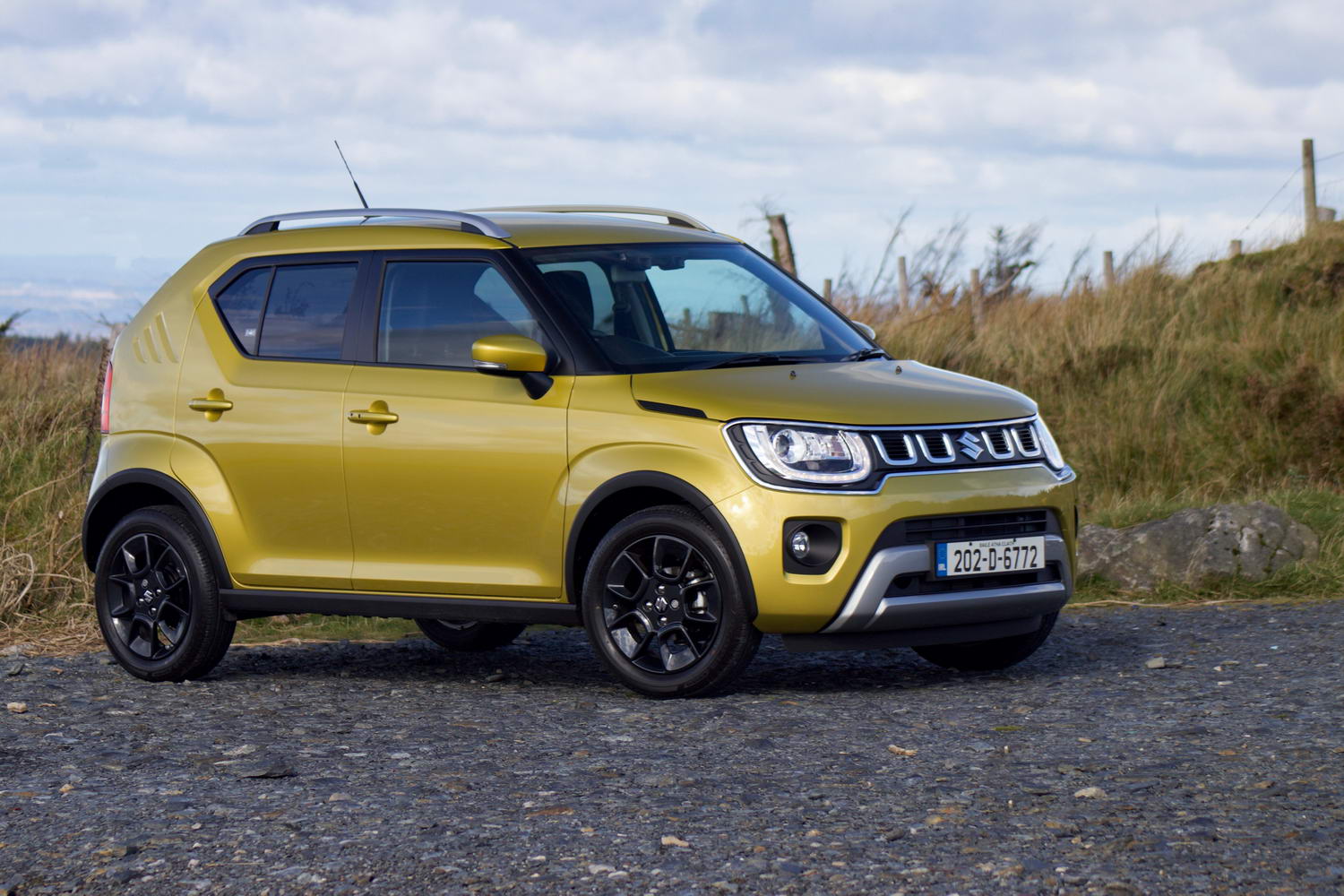 Suzuki Ignis SZ5 AllGrip (2020) review
Suzuki Ignis vs. Toyota Aygo X Limited (2022): the closest competitor to the Toyota in terms of style and price, the Ignis is masses of fun to drive, if fairly crude and unrefined, and should prove to be indestructible.