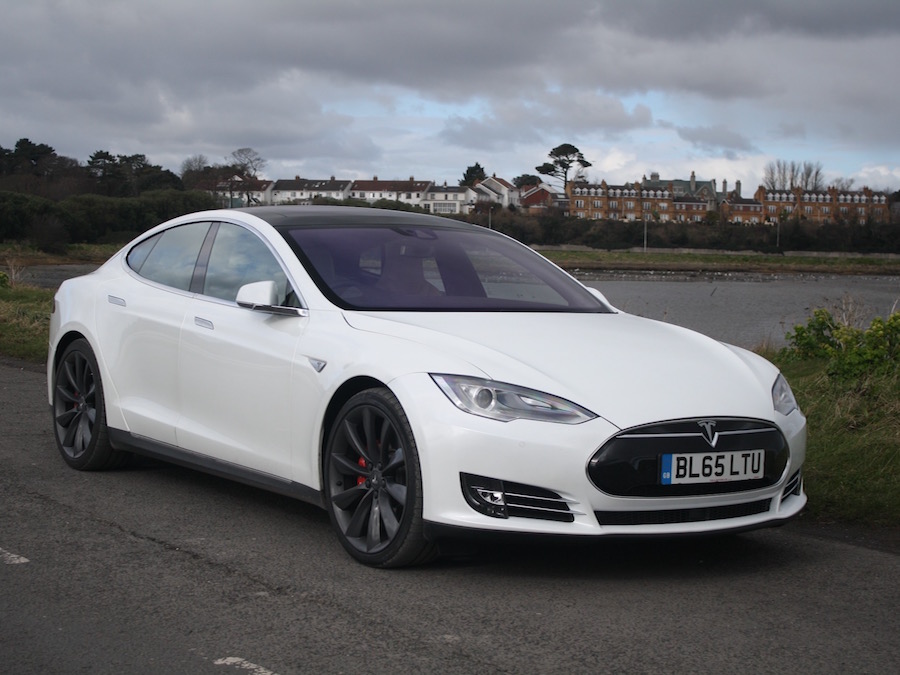 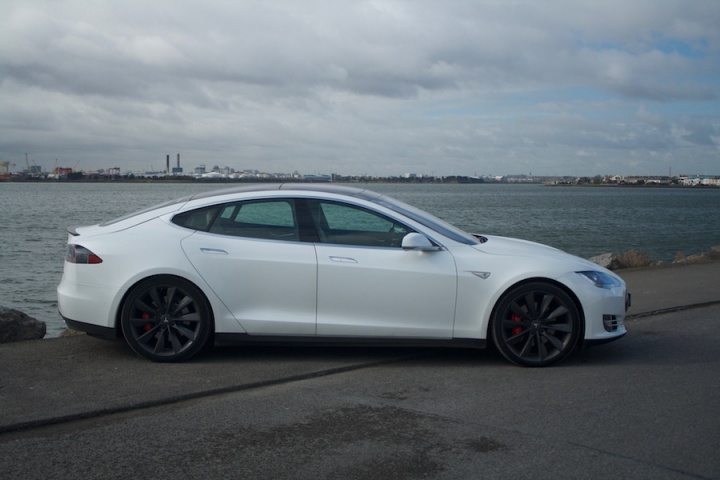 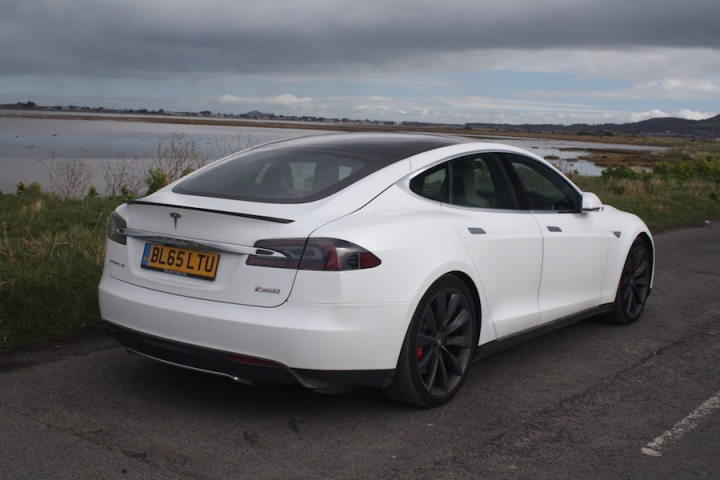 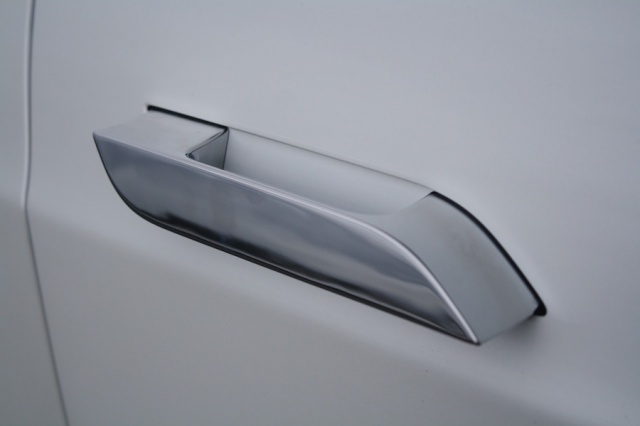 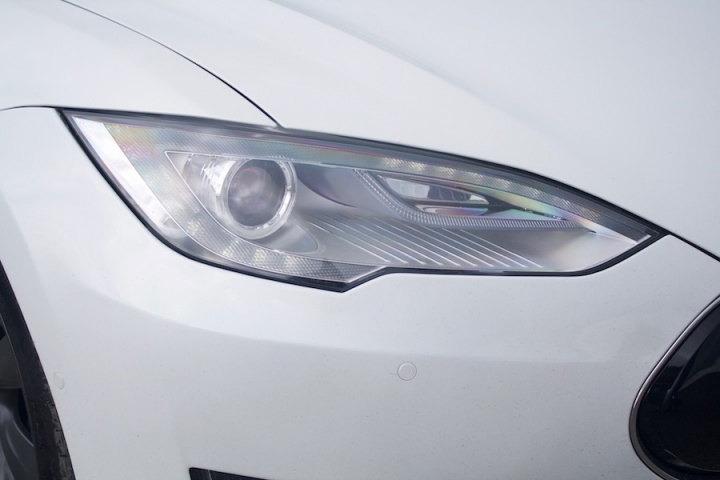 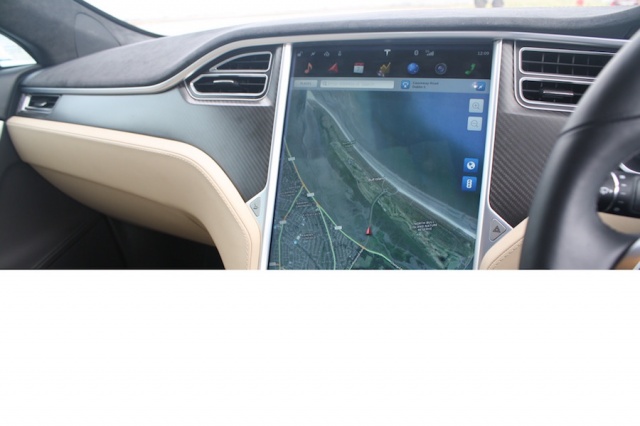 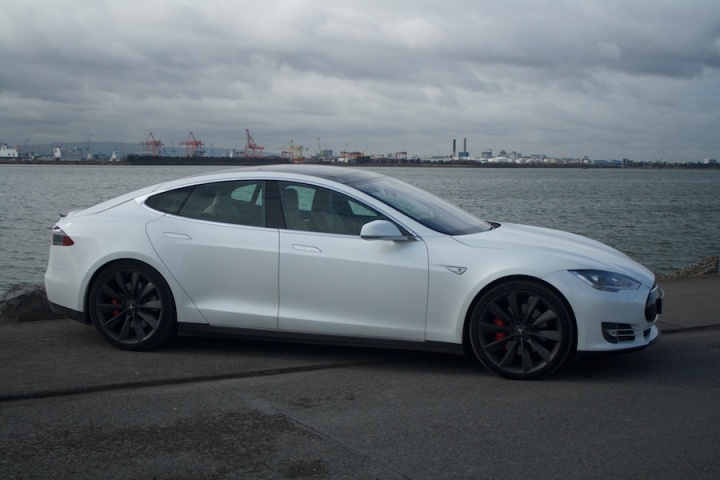 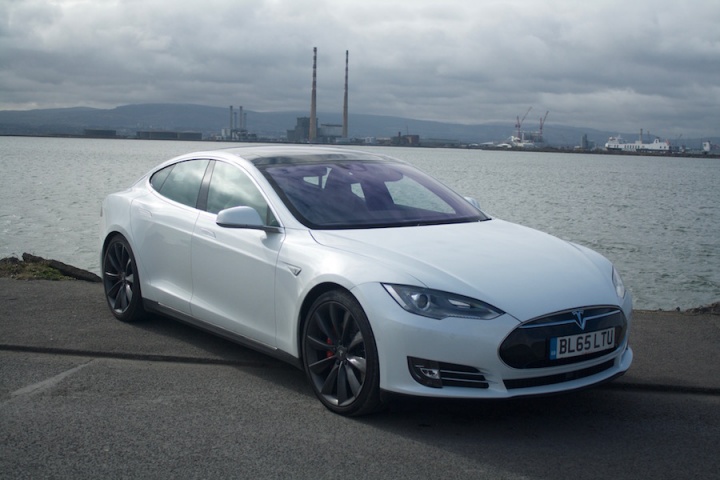 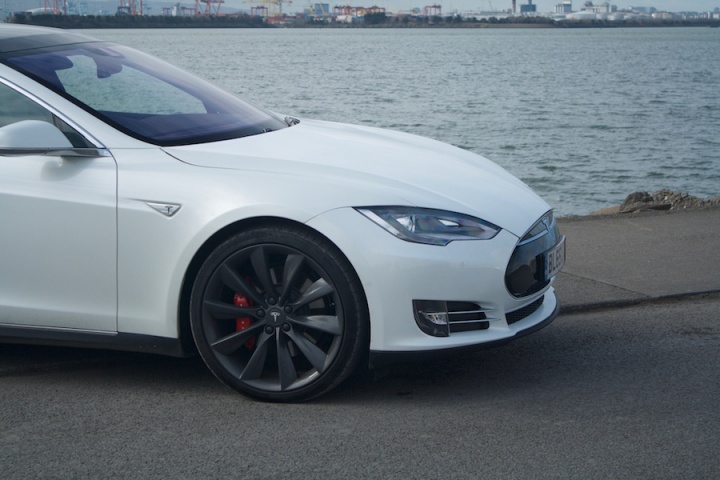 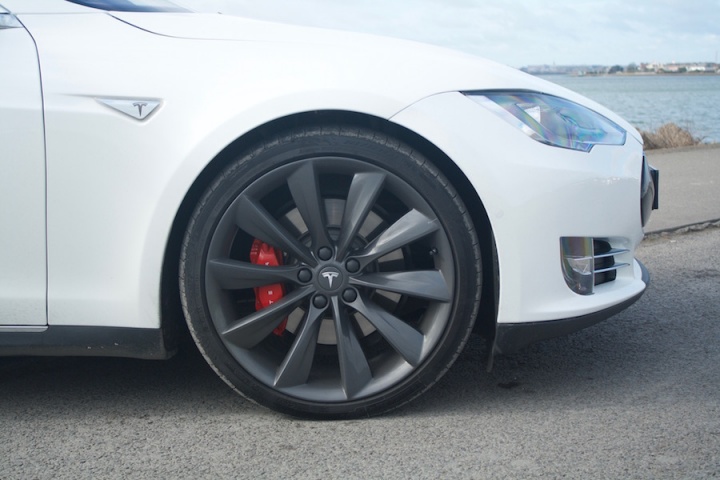 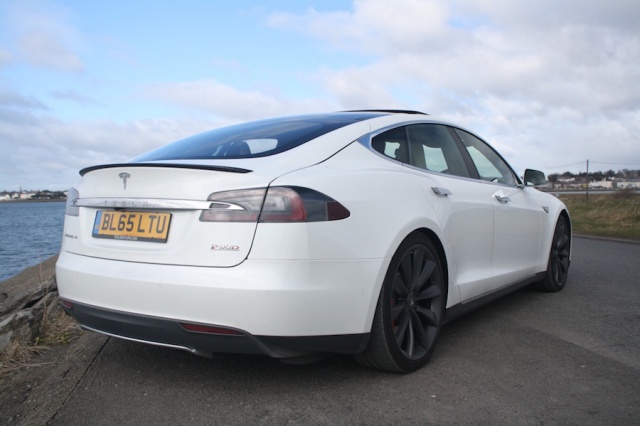 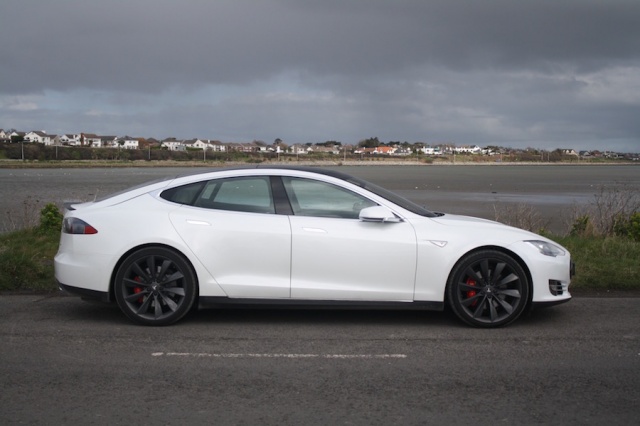 Practicalities aside, the P90D is Tesla's ultimate performance model to date.

With a clean sheet approach to design the Tesla Model S offers lots of appeal while the P90D drivetrain delivers serious performance and a generous driving range, proving electric cars can be truly desirable.

If you're familiar with the Tesla Model S range you will be able to spot the very subtle differences that mark out this range-topping P90D model, namely the small carbon fibre boot spoiler and larger 21-inch wheels, behind which are red four-piston Brembo brake calipers. The rest is as as-per the standard Model S, which is no bad thing. As modern car design goes the Tesla is one of the most stylish and elegant shapes on the road today.

It's clear to see that aerodynamics have played a key role in determining the overall silhouette of the Model S. The blanked off ovoid grille is a further hint to the casual observer that this is no regular car. Unlock the car from the key, which itself is a miniature Model S, and the chrome door handles that normally sit flush with the bodywork rise outwards to enable their use.

What greets you when you sit in is arguably the most minimal interior design on sale in any car today. The centre console is dominated by a huge 17-inch touchscreen that controls virtually every aspect of the P90D. Climate control, music, phone connectivity, even your calendar can all be accessed and it works intuitively.

From the driver's seat there is a smaller display ahead, but even this isn't conventional. You do see all the important information though, such as range remaining, speed and power usage. The drive selector, indicator stalk and cruise control functions are shared with Mercedes-Benz and look and feel as solid as the rest of the cabin. Between the seats there is a huge space for storage that, unless you spec the optional storage compartment, is slightly wasted space for anything other than a handbag or rucksack.

For rear passengers there is ample space too, with generous levels of legroom, though headroom isn't quite as generous as in some rivals due to the Tesla's sleek roofline. It is also possible to equip the rear boot with two rear-facing seats, although these are more of a temporary measure and are best suited to children due to the limited space. Luggage can also be stowed in a second 'boot' in the front, since the Model S doesn't have a traditional engine, but the P90D's extra electric motors for the front axle does reduce this capacity compared to the regular Model S.

Drive the P90D around town and it is in some ways unremarkable. It gets the job done and like most electric cars does so in almost total silence. In fact the most noise comes not from the electric motors, but from the thinly shod wheels that transmit just a bit too much noise into the cabin and don't cushion the surface imperfections any more than the somewhat firm suspension does. The latter can be adjusted only in height, which includes a function to help it over high speed humps. That said, throughout our time around Dublin it remained in its lowest setting without ever causing an issue.

The Tesla's steering is weighted enough to give you a sense of what the front-end is doing though it never feels too heavy. You could easily drive around town all day in this without ever tiring from it. Aside from the obvious performance aspect, which I'll come back to in a moment, the battery is the real star of the show here. When fully charged, it is capable of giving the P90D a driving range of up to 506 kilometres, virtually eradicating the prospect of any range anxiety. In the real world where you drive normally and use things like air conditioning and heated seats you should still be able to manage well over 350 kilometres from a full charge, which is a good deal more than the likes of the latest Nissan Leaf 30kwH.

Charging in Ireland is limited to the existing charging network or a home charger; these are enough to see a full charge achieved in around eight hours. There are plans in place to setup a 'Supercharger' station in Ireland, but no firm decision or timeline has been set yet. These can rapidly charge the battery to a 270-kilometre range in just 30 minutes.

When you want to go faster, the Tesla delivers in spades. On the P90D model this consists of a setting called 'Ludicrous mode' that gives the maximum level of acceleration from rest. This can propel the car forward at 1.1g, described by Tesla as "faster than falling". With both sets of electric motors driving all four wheels the acceleration is nothing short of brutal in its delivery. From a standing start, 100km/h can be reached in just 3.0 seconds - that's just 0.5 seconds shy of what the new Bugatti Chiron http://www.completecar.ie/car-news/article/5834/Brutal-Bugatti-Chiron-breaks-cover covers the same sprint in - and the fact that it does so in virtual silence makes it even more breath-taking.

The pièce de résistance is Tesla's new Autopilot function. Going beyond a simple cruise control system this feature effectively allows the car to drive itself along a motorway or dual carriageway as long as there are sufficient road markings. It can also manage lane changes when prompted by the driver activating the indicator, although at that point their hands must be in contact with the wheel, but they aren't required to make a direct input. It's science fiction stuff, in real life.

Official Irish pricing has yet to be confirmed, but the P90D will be the most expensive model on sale. Based on its UK price, the car we tested would be somewhere around €140,000 imported into Ireland. Buyers can specify a large all-glass panoramic glass roof that can easily be opened to any level via the 17-inch tablet. The choice of interior materials and colours allow for a good degree of personalisation and appear to be finished to a reasonably high quality.

Within the current realm of electric vehicles there is nothing that comes close to offering not only the range but also the performance of the Model S P90D. But Tesla also carries with it a degree of desirability that transcends the established premium brands irrespective of drivetrain. Considering that this is only the second model the company has produced the results are hugely impressive. Looks and performance aside it is the extended driving range that is crucial in setting the Model S apart from all other electric cars and that is what owners are going to relish the most. 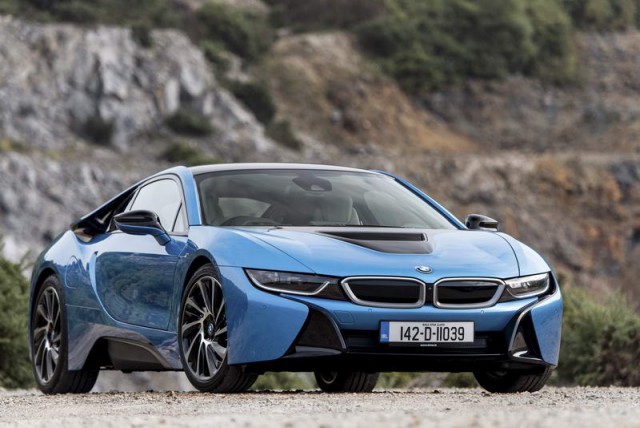 BMW i8 review
BMW i8 vs. Tesla Model S P90D: every bit as futuristic but adopts a different approach to on-road performance. 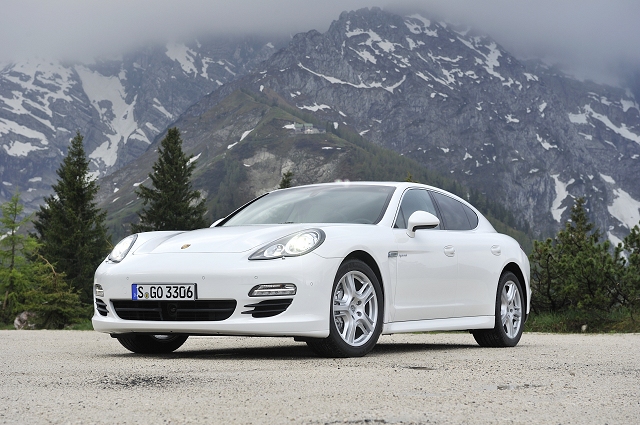 Volvo XC90 T8 Twin Engine review
Volvo XC90 T8 vs. Tesla Model S P90D: luxurious, elegant, quick, the Volvo proves that a plug-in SUV can be something to lust after.