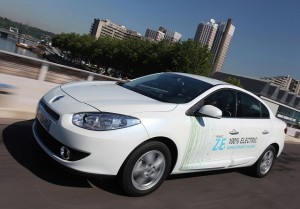 A full electric version of the value-for-money Renault Fluence will arrive in Ireland next year: we've driven it.

A new electric car is no longer a shock; a weak current of zero emissions models is rapidly becoming a full charge. Renault wants to lead that charge and is positive the Fluence saloon will spark aflame even the most negative electro-sceptic. It isn't electrifying - it's a mid-level family saloon. But that's exactly the point...

The Fluence Z.E. (Zero Emissions) we're driving here is a prototype and is, bizarrely, a few centimetres shorter than the final car will be. The production version's extra length will allow the batteries to be more neatly packaged behind the rear seats, augmenting a currently quite small boot.

But even in pre-production form the car boasts proper head- and leg space for four six footers. Think Mégane in terms of cabin ambience, design and quality and you're on the right grid. The only real difference is the odometer, which has analogue gauges to indicate your real-time power sapping, and remaining charge.

It won't surprise you to learn that the French dudes aren't too keen on saying how much it will cost. But using all our best journalistic sorcery we ascertained it should be priced on par with the internal combustion versions, once the €5,000 Government grant has been subtracted. That puts it between €20,300 and €23,500 as the Fluence range stands in Ireland.

There's a slight catch in that Renault won't include the battery pack in the price. Instead it aims to lease the batteries to owners with a monthly fee of about €100. However, Renault claims that running costs are about a fifth of the comparable diesel car and that an owner's break-even point is just 10,000 kilometres per year.

The absence of internal combustion rattle gets less eerie with every new electric car we drive, but it's still not quite normal yet. From a road tester's point of view it's quite disorienting - electric cars all tend to feel about the same. Turn the key, check the dashboard for the 'on' light, tentatively tickle the throttle, be impressed as it pulls away with only a faint rumble from the tyres and a whizz from the motor.

The fundamentals of the Fluence all seem about right at the moment. The ride is compliant, the steering light, the cabin a suite of calmness. Certainly, the refinement levels are at production car standard. Its 95hp (70kW) power output isn't shocking - in fact it's a little lethargic if anything - but that old maximum torque at zero rpm chestnut at least makes it feel zingy from the get-go. There's 227Nm of it. Quite stark engine braking at all speeds is the cost for a motor that becomes generator when the throttle's not in use, though the brakes aren't grabby at all, which is a common electric car issue.

The Fluence's battery can be charged from a household socket in eight hours for a 160 kilometre range, though by the time cars hit Irish roads in any meaningful numbers there should be a quick charging network too, meaning a full charge in 30 minutes or so.

Alternatively, whirr your way to a battery change station (they're just an idea at this stage) and swap your chunk of lithium ion for a fresh one. That's a three-minute, automatic operation.

As a Renault three-box saloon the Fluence is probably going to have about the same level of functional appeal as a packet of AAA Duracells. However, lots of space, a useful range of charging solutions and low running costs will ensure the Fluence leaves showrooms relatively quickly and quietly when it arrives.