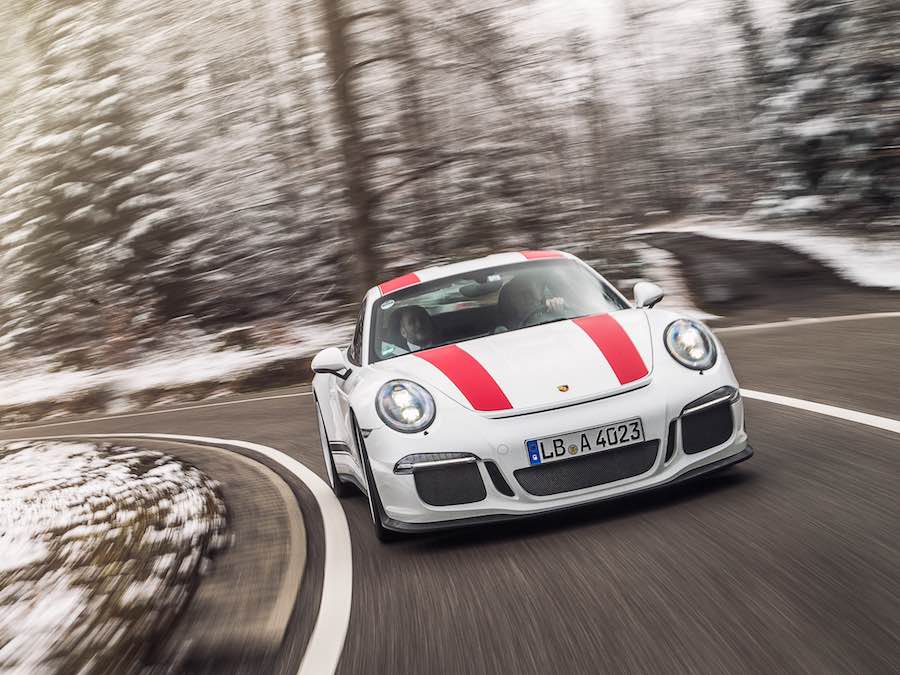 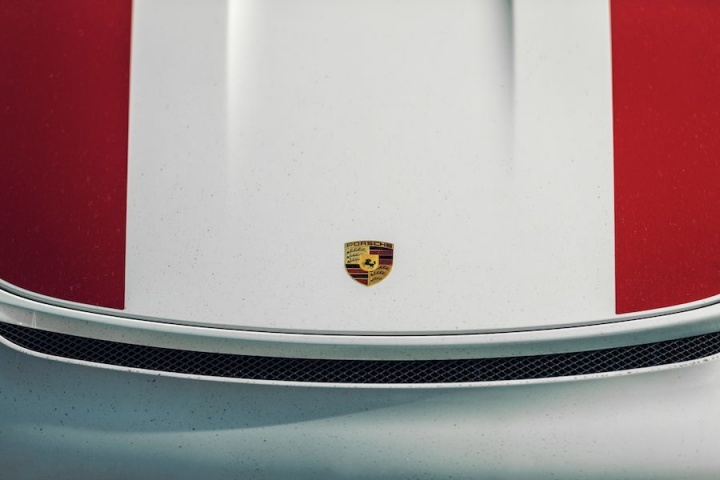 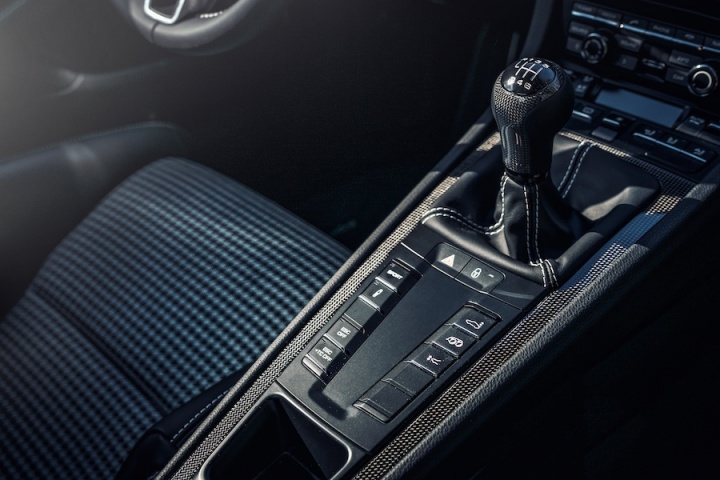 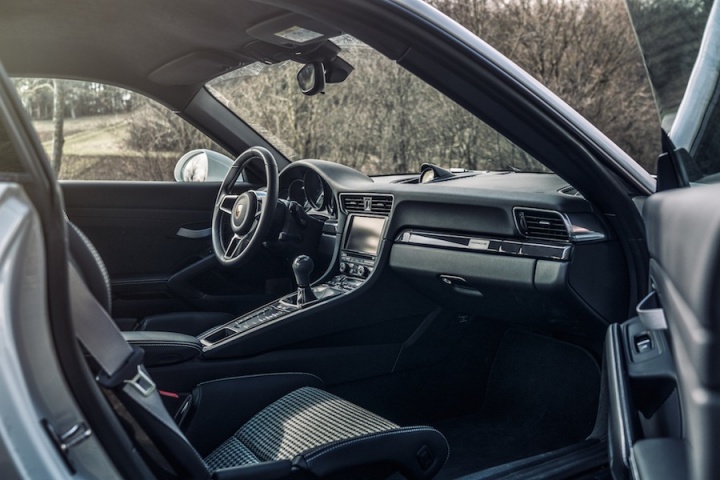 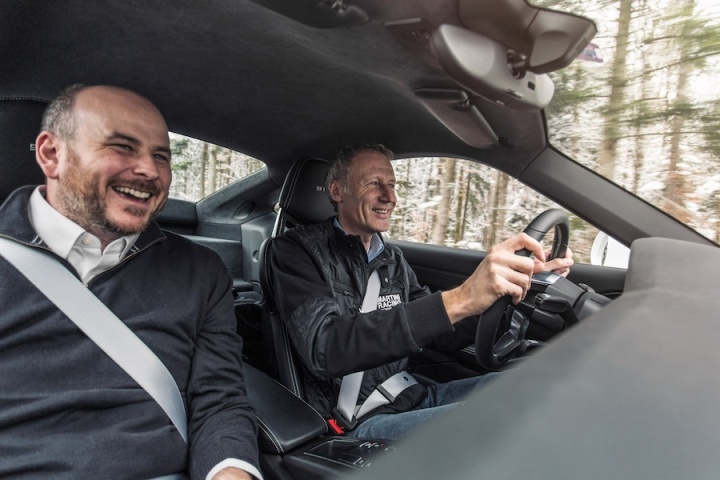 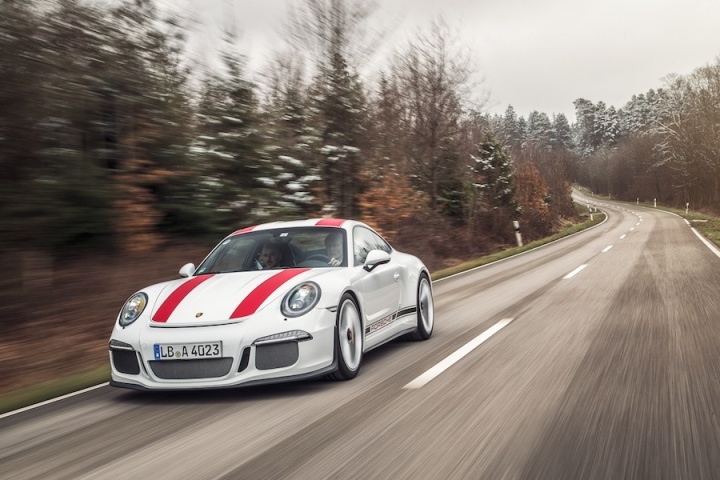 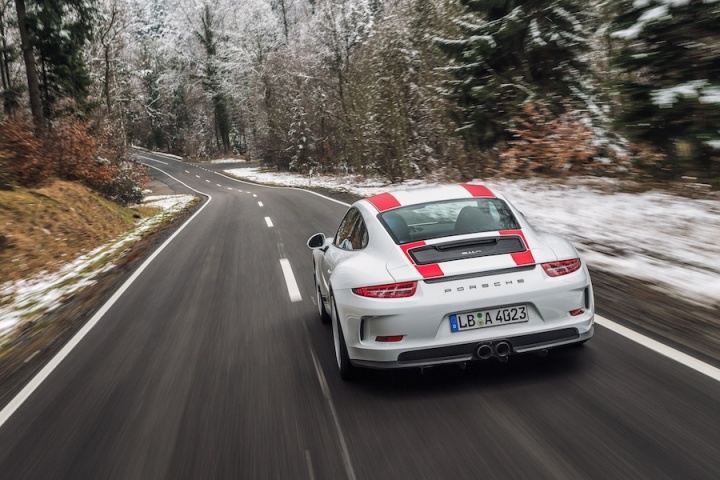 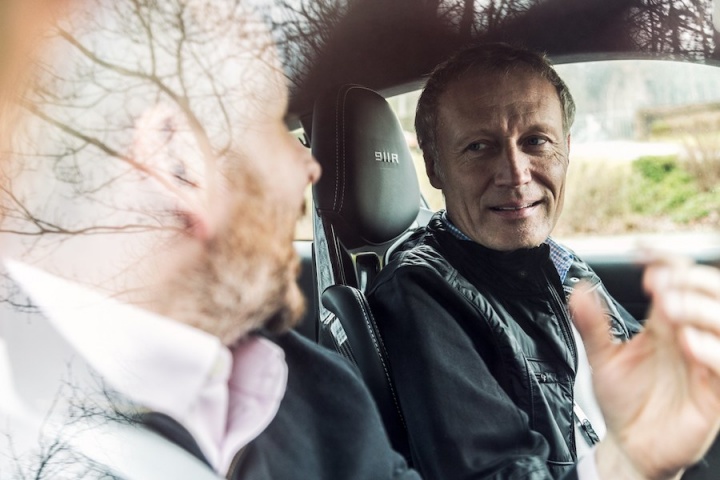 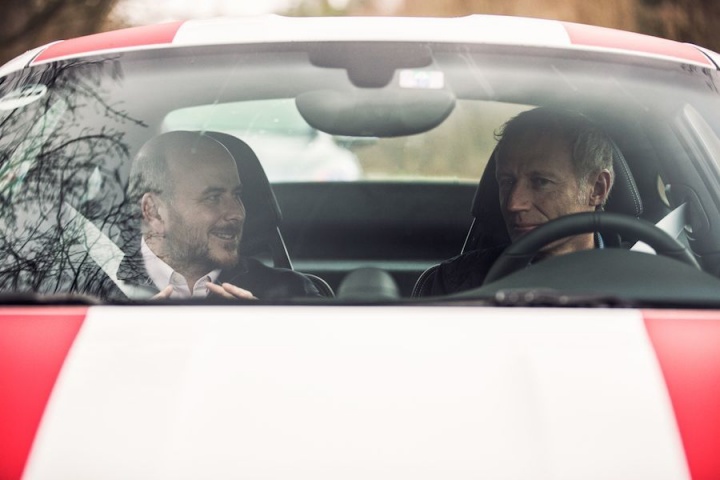 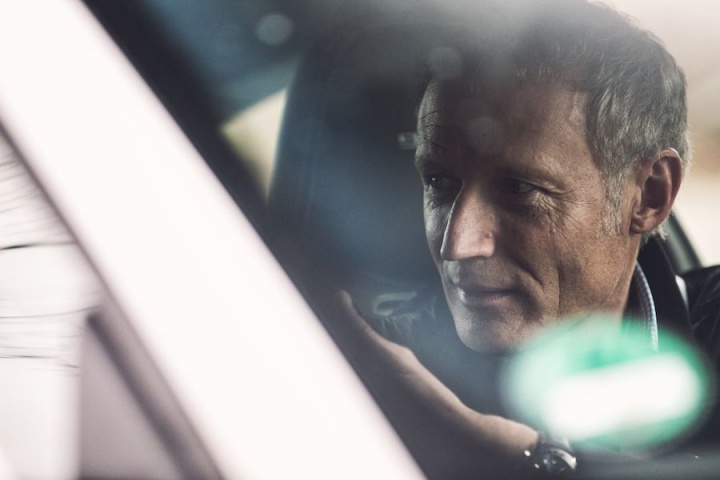 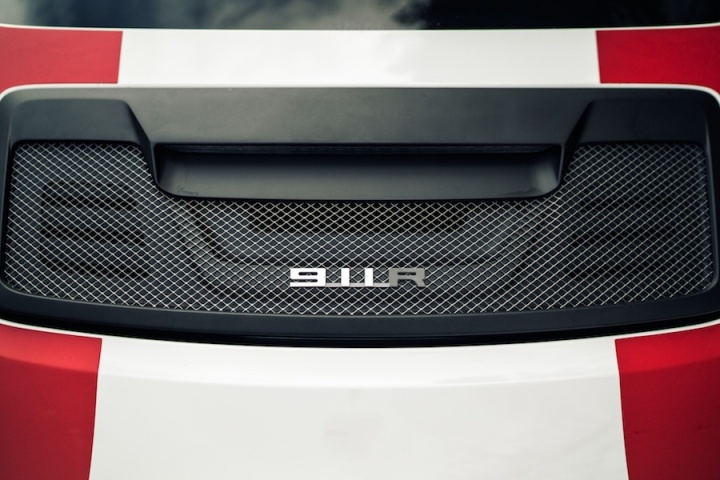 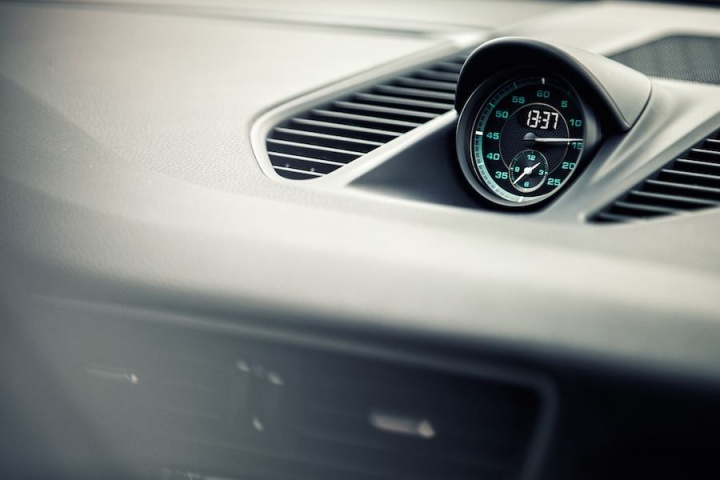 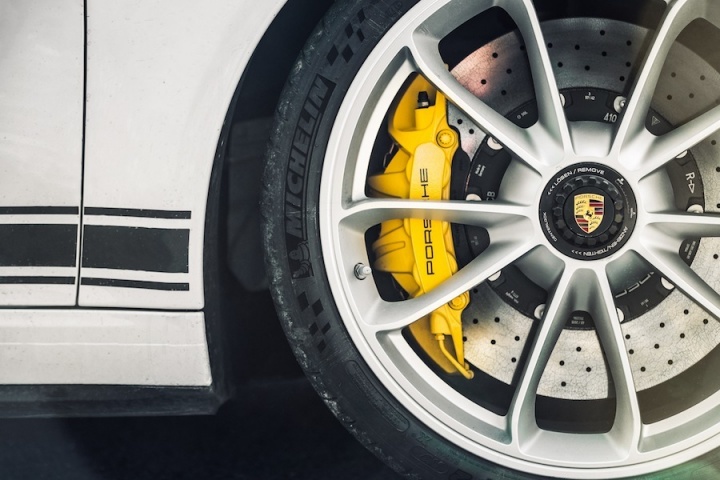 We ride in the new Porsche 911 R with the man who developed it.

Okay, so we've not driven the new Porsche 911 R as yet, but we've spent hours in it with Porsche GT boss Andreas Preuninger and experienced a lot of its performance as a result. It sounds fantastic, looks amazing and goes like hell. That it's got three pedals and a stick only has us looking forward even more to getting in the hot seat.

It wears an R badge, but the 911 R is very much a product of Porsche's GT department. The boss, Andreas Preuninger, wants it to be as true to the 1967 original as possible. So gone are the wings of the 911 GT3 and 911 GT3 RS, and the 911 R uses the slimmer-hipped body of the GT3. The wheels and tyres are the same size too, and behind the wheels are the tell-tale yellow callipers that signal Porsche's PCCB carbon ceramic brakes. Without the stripes - a free option in red or green - and the Porsche script down the flanks it could pass as an ordinary 911 Carrera, though looking a bit closer reveals it's more specialist than that. The channelled roof and bonnet reveal its exotic build, featuring magnesium in the case of the roof, while carbon fibre is used for the bonnet and wings. There's some clever airflow management underneath to maintain stability at the quoted 323km/h top speed too, though Preuninger admits that figure is on the conservative side. The front bumper, with its large intakes and the rear with its punctured vents hint at the GT department's involvement, but it's a subtle look, which is gloriously evocative of the car it shares its badge with.

Peek through the Perspex rear windows and you'll see no seats in the back, while the front pair are fixed-back lightweight carbon buckets from the 918 Spyder, covered in hound's-tooth and leather in a mix that alone defines the classic and contemporary amalgam that the 911 R ultimately represents. Along that theme, the instruments are highlighted in green and there's a refreshing lack of complexity - even the stereo and climate control system are optionally removable if you want to save as much weight as possible. There's no embellishment on the steering wheel either (the car in the pictures isn't the final production item), as Preuninger prefers no reflective surfaces on the wheel, while the dashboard is the simple, plain, non-leather covered one as standard. Most will option leather, with visible stitching, but that's kind of missing the point. The biggest signifier of the simplicity and driver focus inside nestles between the seats and at the driver's feet, as this GT3 RS-engined 911 R is operated by a six-speed manual gearbox and three pedals. Glory be...

We didn't yet drive the car, so our experience with the 911 R was entirely undertaken in the passenger seat. We'd usually rule out making judgements on a car so positioned, but it's obvious that the 911 R lives up to its purist, visceral billing even when witnessed from the wrong fixed-back carbon pew. As it's the man who dreamt up the idea and developed it to this point driving, it's worth experiencing. As part of its purist quest Porsche has stripped even more weight out of the 911 R, to the point that it's a sizeable 50kg lighter than the GT3 RS. Some 4.5kg of that is in sound deadening, allowing even more of the 4.0-litre flat-six's characteristic rumble and mechanical din to enter the rear cabin, while a lightweight titanium exhaust adds a rich blare to the proceedings. Mix all that with some chatter from the clutch release bearing and the mechanical differential and it's the noisiest 911 since the fabled 997 GT3 RS 4.0 was released. That car comes up a lot in conversation with Preuninger, as it was used as a benchmark and, whisper it, it was surpassed by the new car in every area.

Performance is never in question; having experienced the speed of the GT3 RS previously in the correct seat the 911 R comes as no real surprise from the wrong one. It sounds better though, the induction noise not so obvious, and the immediacy to Preuninger's inputs seem greater still. There's less drag in the manual gearbox, and when mated to the lighter, optional single mass flywheel, there's 5kg less weight to spin, making that 4.0-litre engine rev with even more fervour than before. Preuninger still short shifts, clearly enjoying the bespoke manual gearbox. It comes with a rev-match system that'll blip the throttle on downshifts automatically if you don't fancy rolling off the brake yourself. Those that like to will be happy to find that it's disabled by the Sport button, its sole task. Other choices via individual buttons around that gearstick include the sports exhaust, PASM suspension and the traction and stability systems. And that's it; the 911 R otherwise devoid of distractions. Pick your settings and get on with it. For the record, Preuninger likes Sport on, normal suspension, exhaust noisy and the traction and stability turned off.

The 911 R moves around a little underneath us as he drives on roads he used to develop it. The combination of bespoke rear-wheel steering combined with tuning of the steering system makes it particularly agile. He describes it as the best steering 911 yet, bettering even the GT3 RS 4.0 for turn-in and stability. That's quite a claim, and difficult to judge properly without steering it ourselves, but it does appear to be very faithful to his responses, while it rides even broken tarmac with real composure, too. For the finer nuances we'll have to wait until we drive it, but we can check off the boxes marked 'sensationally quick', 'epic sounding' and 'fine riding' with conviction, and we're pretty certain when we do drive it the rest will be just as agreeable.

This is the purest modern Porsche 911 you can buy. It's all about the driver here, and we want one. Thing is, so will more than 991 people, even though Porsche upped the original quota of 600. It's in such demand that even Preuninger can't get his hands on one, though he can satisfy himself with the three 'zero number' development cars that exist for GT department use. It's fully equipped as it should be, insomuch as it's got things like PCCB ceramic brakes and a sports exhaust; if you want more luxuries a few are offered, but really if that's your bag then there are other 911s that might suit you a bit more. It'll be a solid-gold investment for those lucky enough to own one, but we beg that, if you're lucky enough to be one of those people, don't park it in a climate controlled garage; use it, and let your pals (and us, please) drive it, too.

Porsche 911 GT3 RS: want the same engine mated to a PDK gearbox? Then you know the answer, though why you've read this far is a mystery.

Singer 911: the guys at Porsche admit the R will appeal to customers wanting old-school thrills with modern performance. Singer will do just that, for more money.

Corvette Stingray 2LT MT7: not quite as powerful, but 6.2 litres of V8 pushes out more torque and there's a seven-speed manual. A brute, but it's a lot cheaper.

The 911 R came about after the six-speed manual hack GT3 development car that was lying around the GT department became a huge hit with staff. The idea grew, and got better as it developed, the R addressing the needs of those drivers who aren't so concerned about outright speed (it's still stupidly fast) and instead focusing on interaction. Keep your GT3 or GT3 RS for track work then and your 911 R as a daily driver if you like. If only.