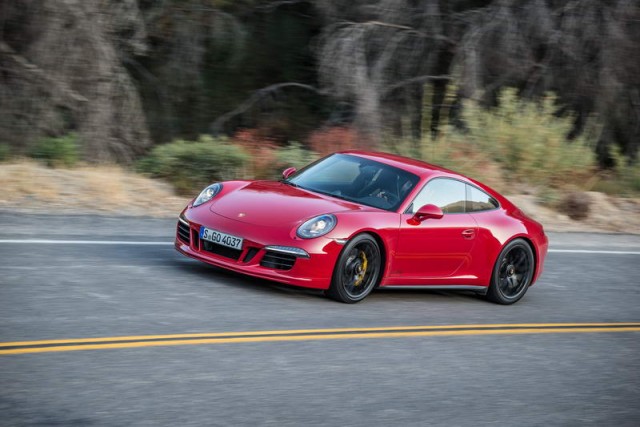 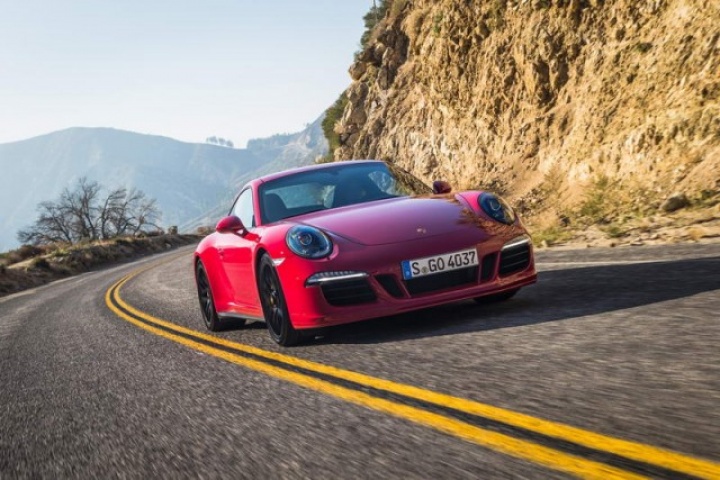 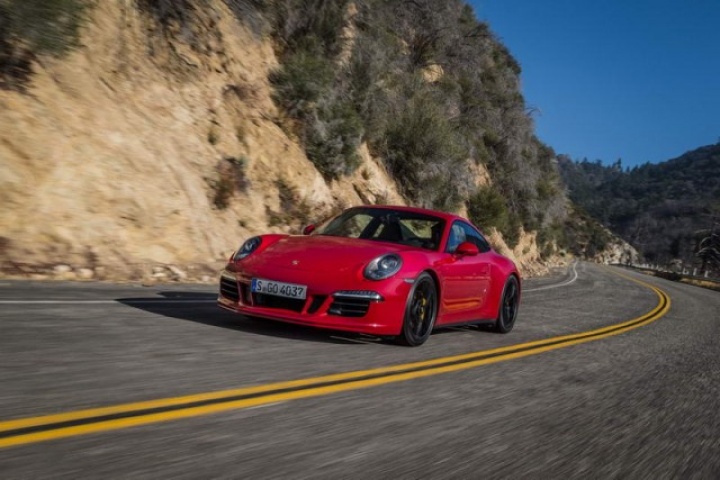 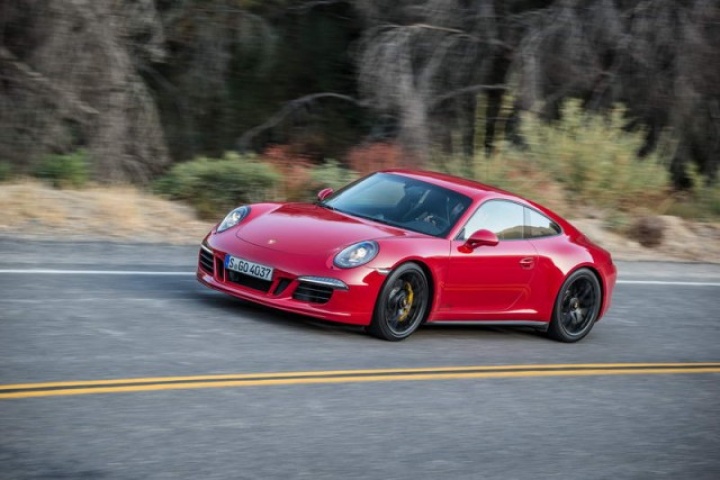 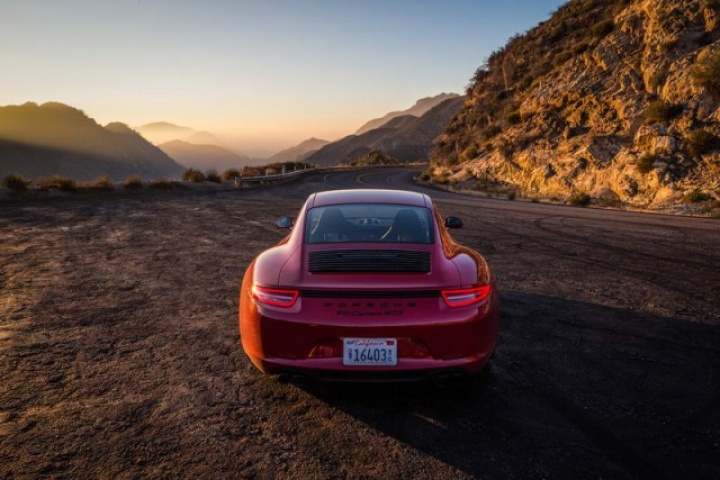 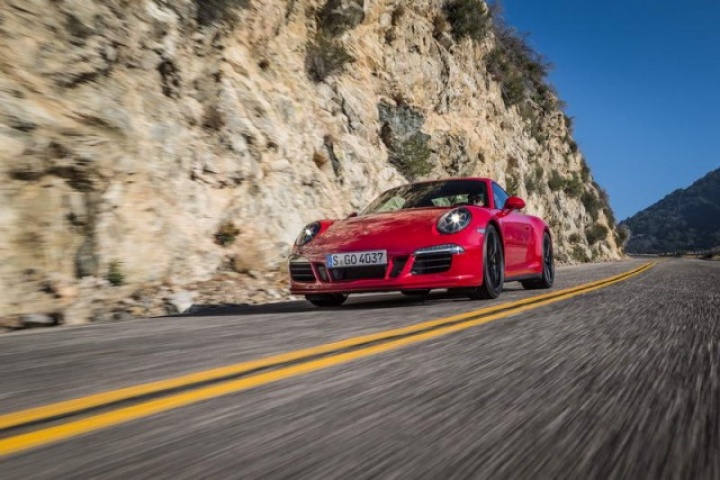 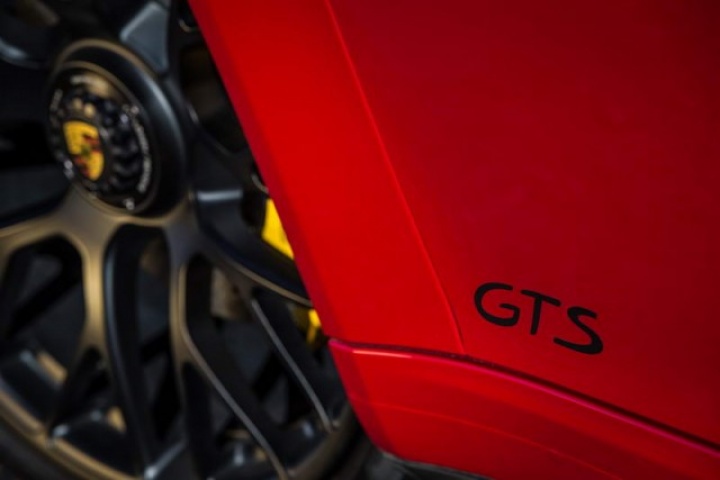 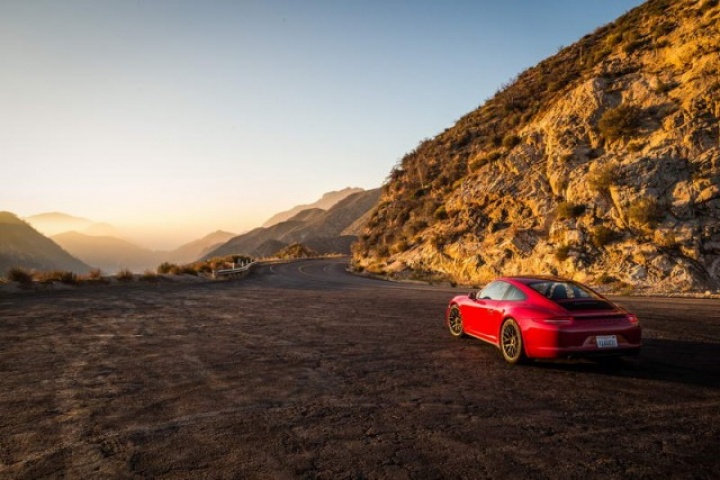 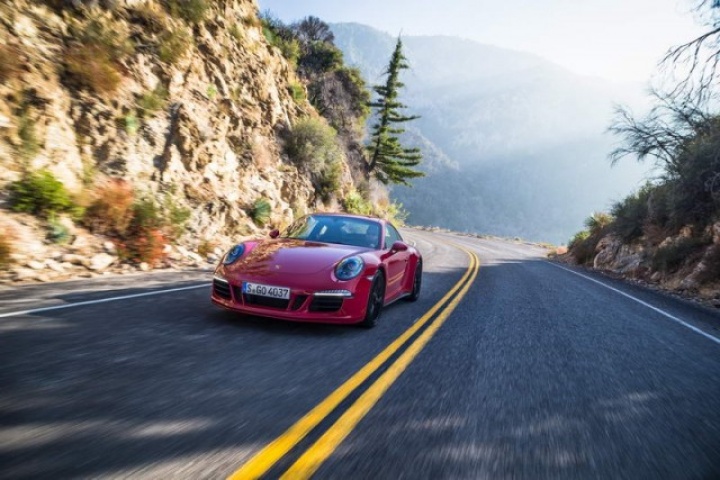 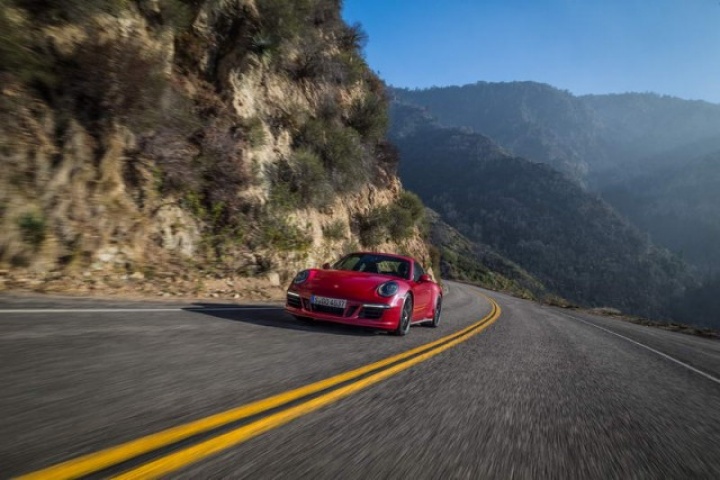 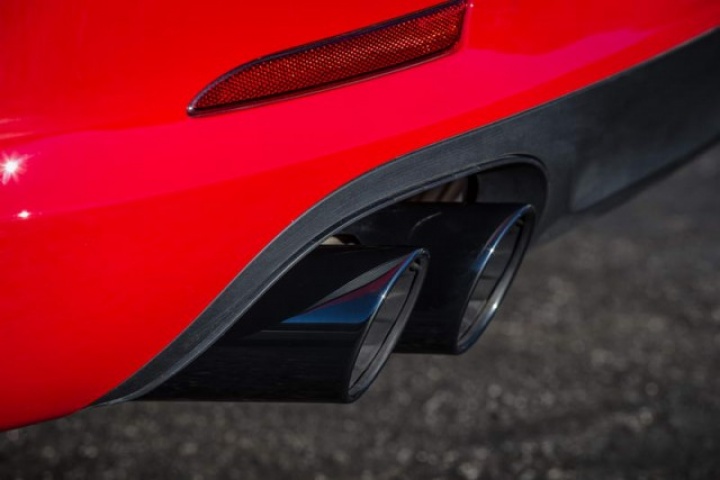 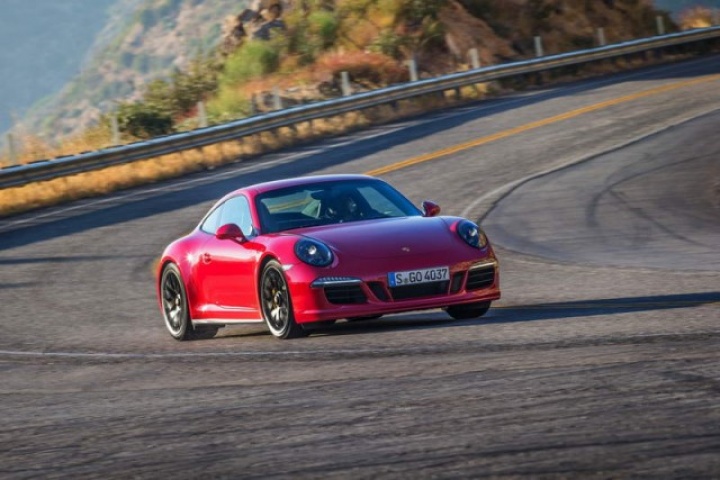 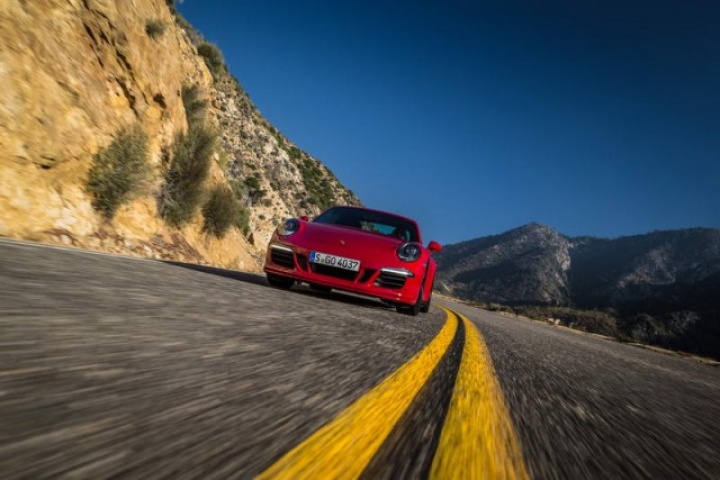 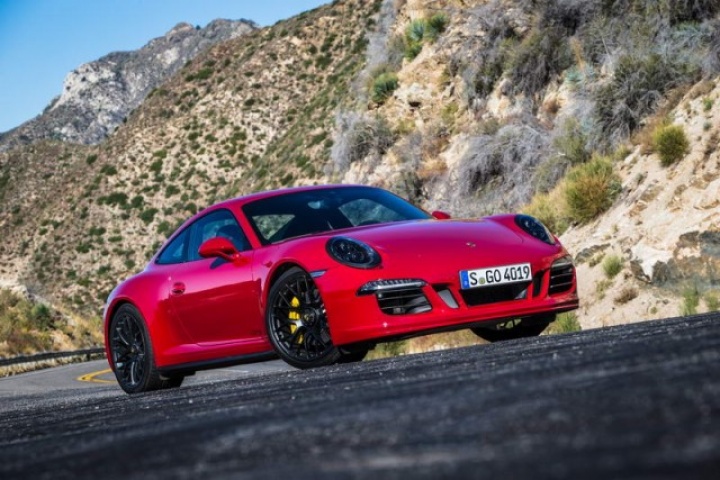 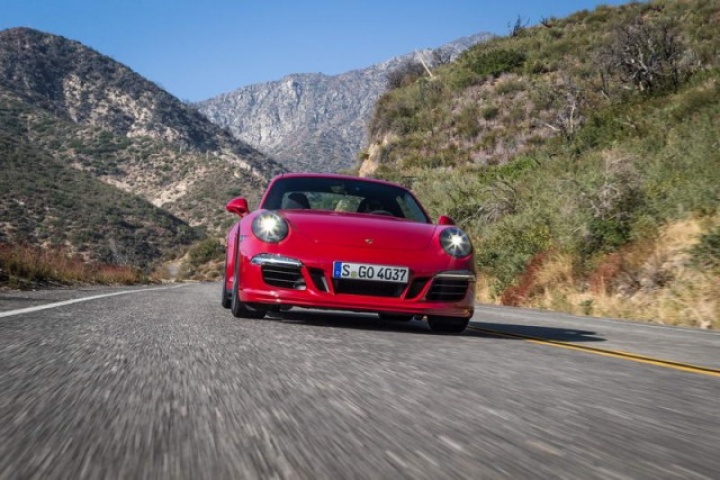 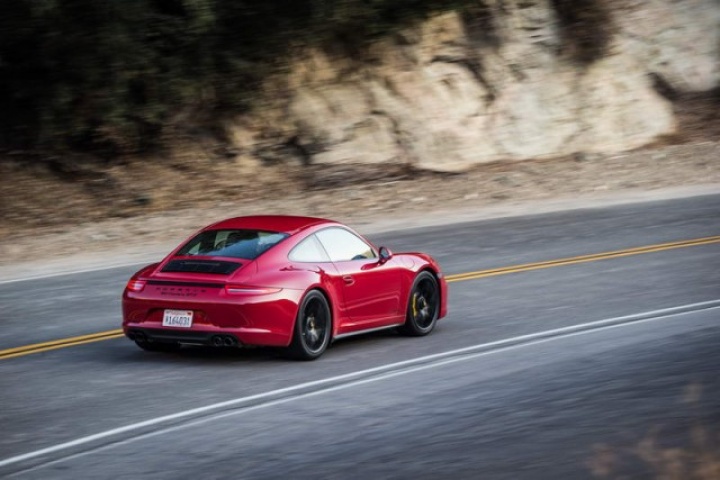 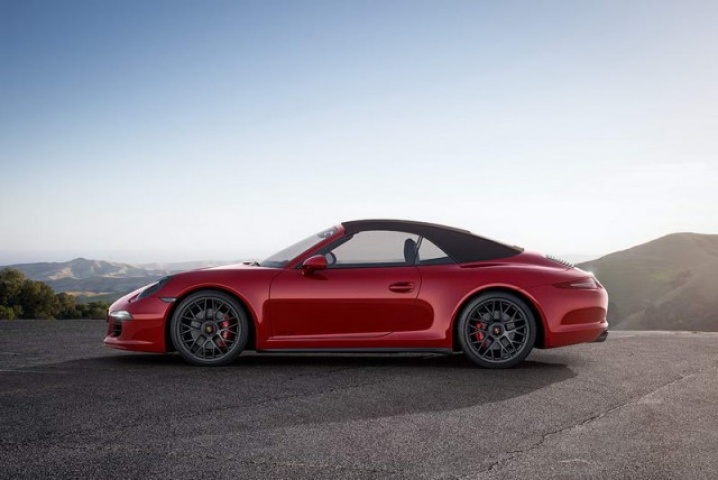 GTS badge makes an early appearance on the 911 line-up with more power, unique looks and equipment.

Porsche's GTS badge bridges the gap between the Carrera S and the GT3, this halfway house, spec-adjusted and performance boosted 911 arguably the most complete 911 you can buy. In coupé form at least...

Porsche's new 911 Carrera GTS distinguishes itself from its regular Carrera and Carrera S relations with some unique styling and specification revisions. Based on the wide-hipped Carrera 4 body (whether two- or four-wheel drive) there's a GTS-only front bumper, black headlight and window surrounds and trim, GTS badging, chrome-tipped exhausts and black painted single nut 20-inch alloy wheels. The cumulative effect of these changes is impressive, the GTS looking distinct, perfectly positioning it between the Carrera S and GT3 models in the 911 range.

GTS badging features inside too and the sport steering wheel is covered in Alcantara, Porsche's typical detailed approach adding subtle but effective changes to demark this new model. Unlike in any other Carrera it's possible to specify the GTS without rear seats, further linking it to the two-seat only GT3. Do so and you'll save a scant 7kg, but also limit the 911's occasional usefulness.

The specification list ticking make-up of the GTS includes such things as the adoption of Porsche's Powerkit upgrade, the freer-breathing cylinder heads liberating an additional 30hp to give the GTS 430hp at 7,500rpm. Some acoustic tuning has been undertaken too, so the flat-six's presence is more readily heard (and enjoyed) at everything from idle to maximum revs. The switchable, standard Sports Exhaust allows you to quieten it down a little, but even so it's more obvious than a standard 911's.

That shapelier Carrera 4 body brings with it wider tracks front and rear, while unique damper settings on the PASM (Porsche Active Suspension Management) system are calibrated for a more sporting drive. Those 20-inch alloy wheels are wider by half an inch front and rear, to the benefit of the GTS's mechanical grip. The steering is more eager and precise in its turn in too, the GTS's nose far more faithful to input, while the steering's fine weighting is underpinned by detailed communication at the wheel.

Traction is as impressive as ever, while the engine's free-revving nature is better accessed thanks to Porsche's work on the standard seven-speed manual gearbox. Stung by criticism of the obstructiveness of the shift, Porsche has reduced the internal friction, improving the quality and accuracy of the lever's movement markedly. Previously, we suggested that the 991-series 911 was one that should only really be considered with two pedals and the PDK automatic transmission. The GTS changes that. Pleasingly, the revisions to the seven-speed manual will be adopted across the entire Carrera line-up.

With the gearshift working now as it should, the 911 GTS is simply remarkable. There's torque vectoring helping with apportioning drive and the GTS's agility is breath-taking. The speed it can carry and its composure even in challenging bends are a step ahead of its regular Carrera relations. It's the chassis revisions - and that gearbox - that define the GTS, the additional power it brings not being quite so apparent in comparison, even if the 3.8-litre engine revs with more enthusiasm. The brakes are as powerful as ever; even sustained hard track use sees little drop off in pedal feel or braking force.

You could spend a lot of time and money trying to specify a Carrera S to the GTS's level. Hence it actually looks like pretty good value. The Powerkit itself would account for a sizeable portion of the price difference, and that's before you consider some of the GTS's unique features like its wide body, 911 Turbo inspired wheels, GTS-only styling elements and the suspension set-up.

The evocative GTS badge isn't just offered in Carrera 2, manual coupé guise. It also adorns - with less credibility - both four-wheel drive and Cabriolet models, with either manual or PDK gearboxes. Go for the PDK and the GTS gains torque vectoring plus, though tested back-to-back on track the standard torque vectoring of the manual model didn't leave us wanting. The rear-drive GTS is additionally offered with a no-cost 90-litre fuel tank upgrade, which is worth having.

Porsche staff quietly admit that the manual coupé with rear-wheel drive is the 'real' GTS, and we're inclined to agree. PDK shouldn't be discounted if you prefer two pedals, but with its improved shift, a manual GTS is a real and rare joy that engages and delights, yet retains the 911's unusually rounded ability. GT3 aside it's the best driver's 911 money can buy, though start adding a few options and that GT3 looks tantalisingly close...