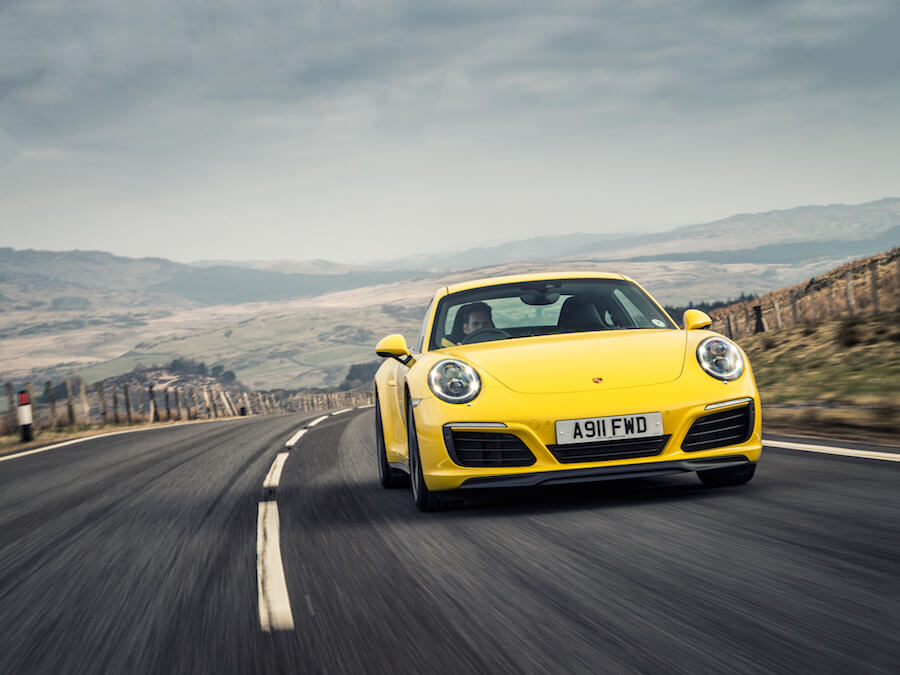 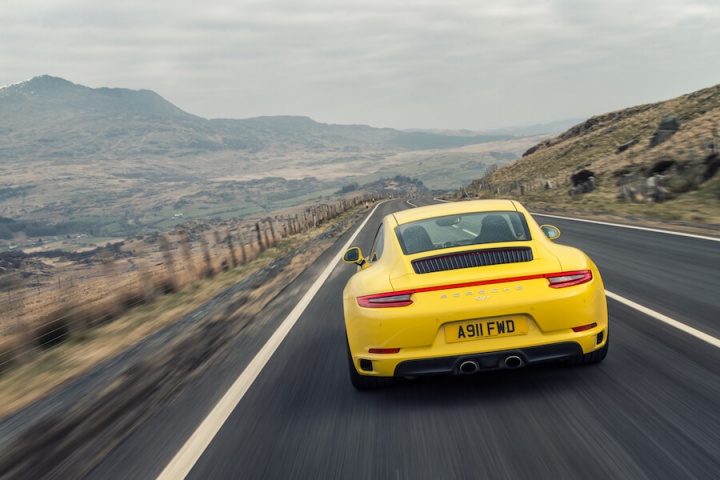 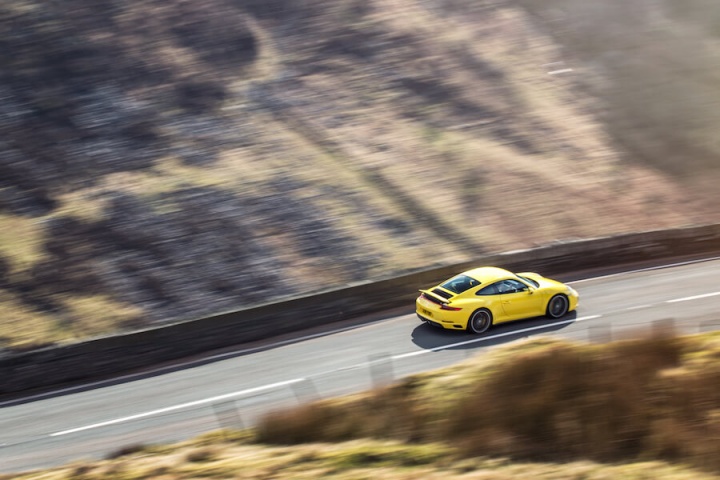 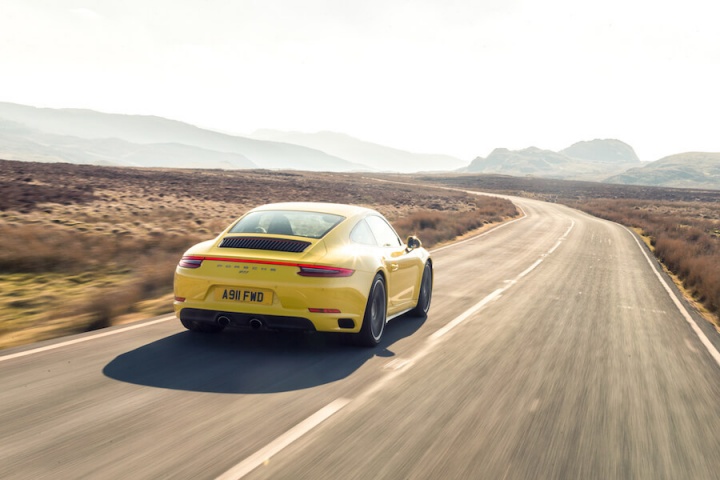 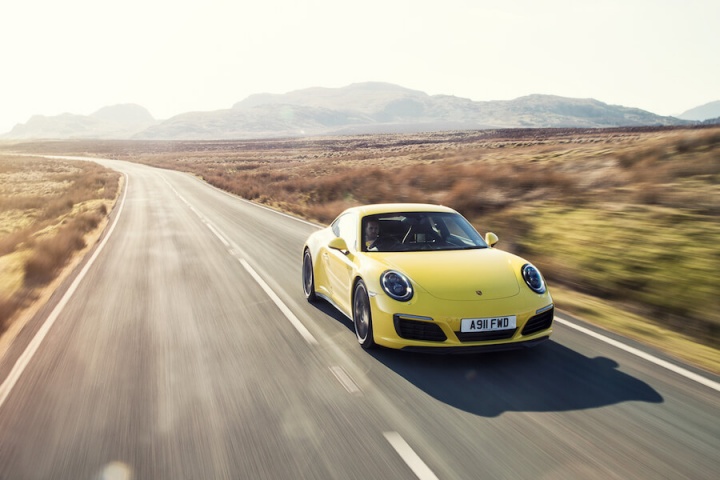 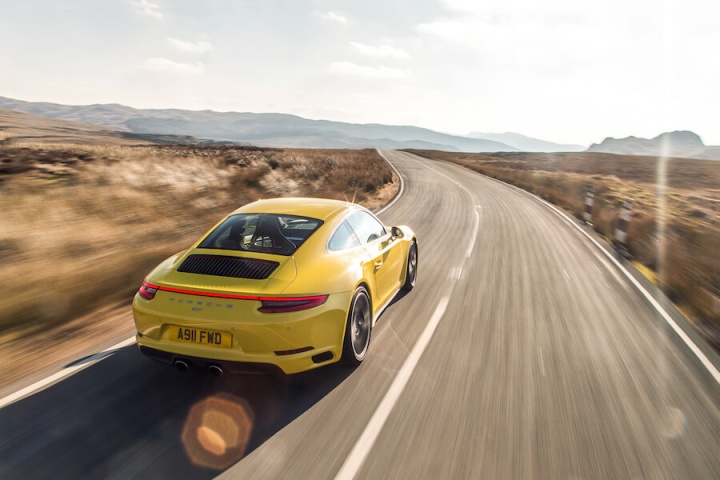 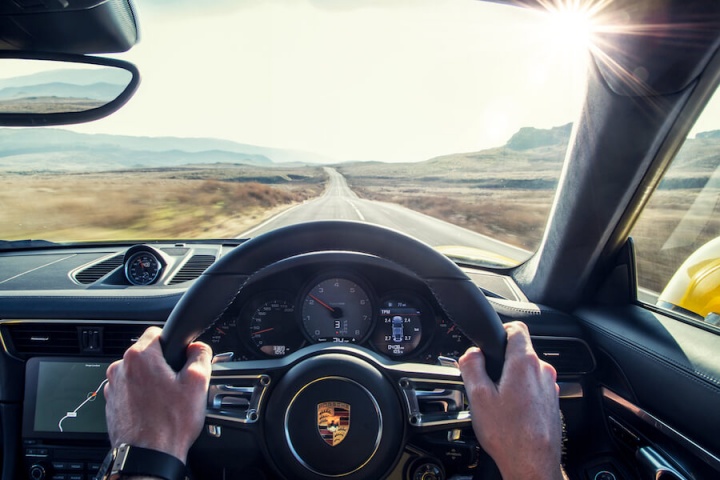 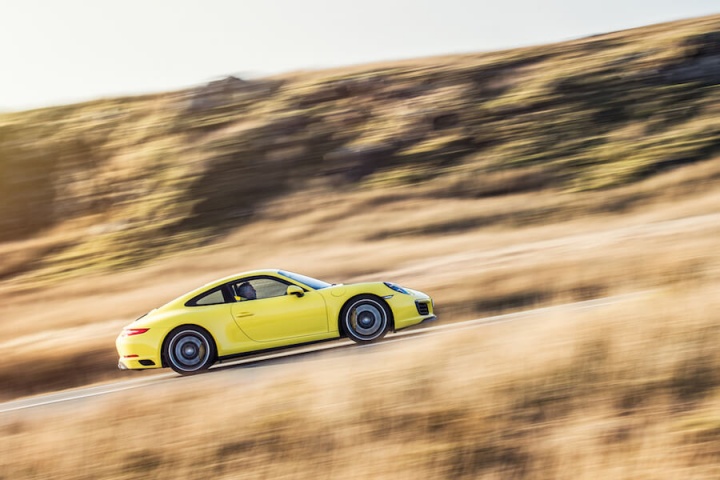 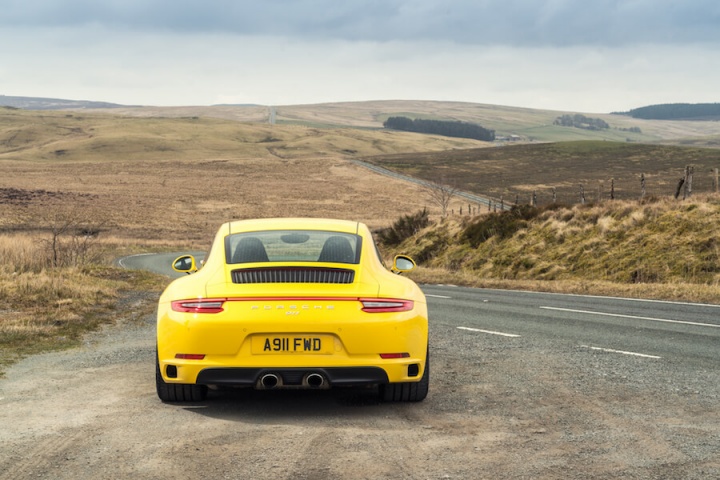 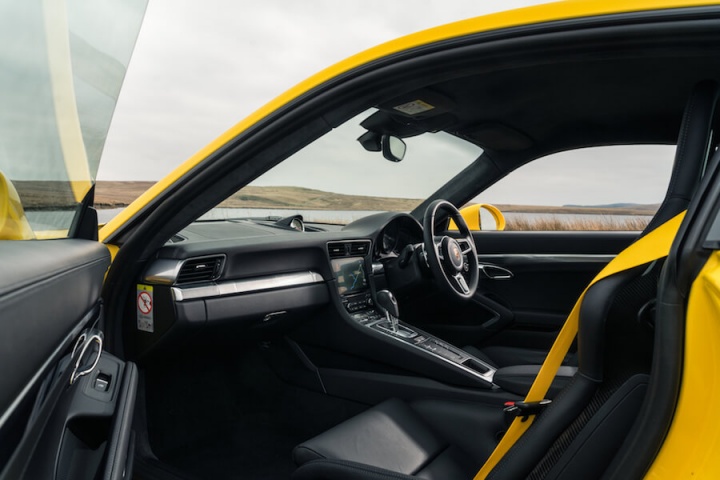 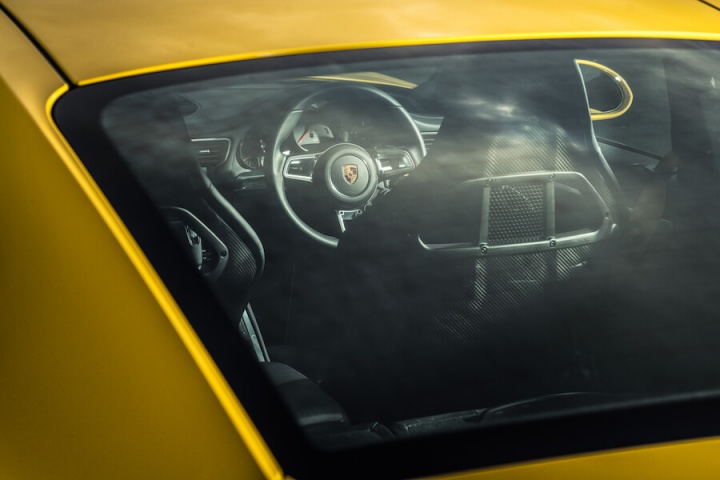 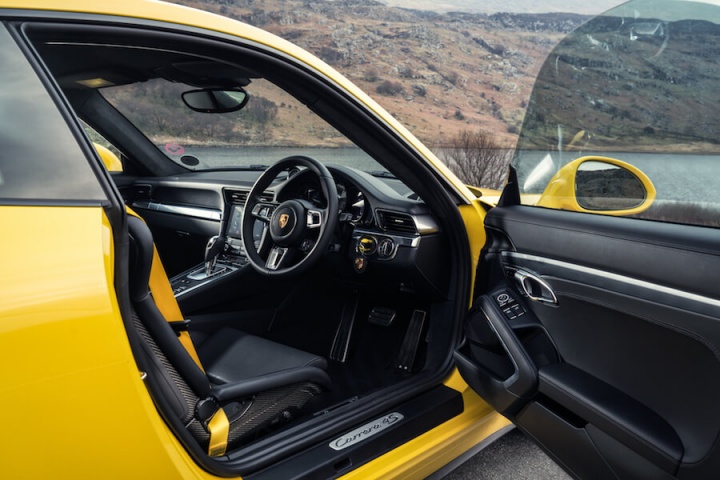 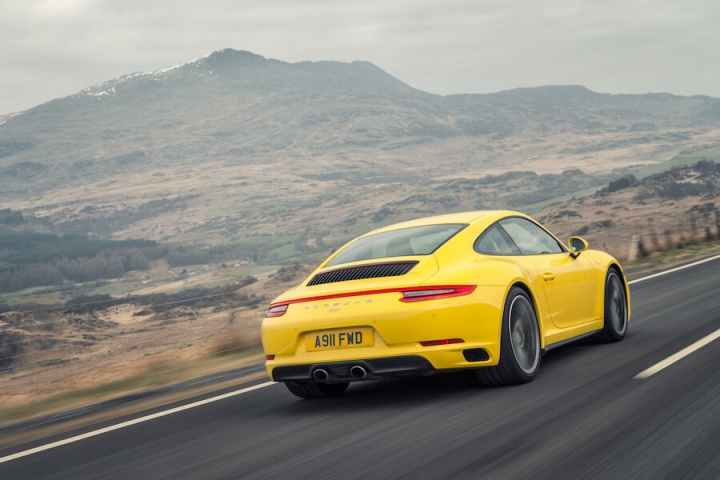 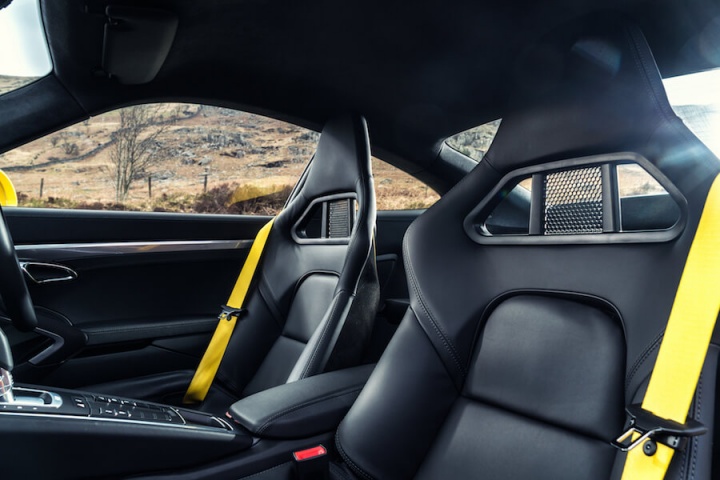 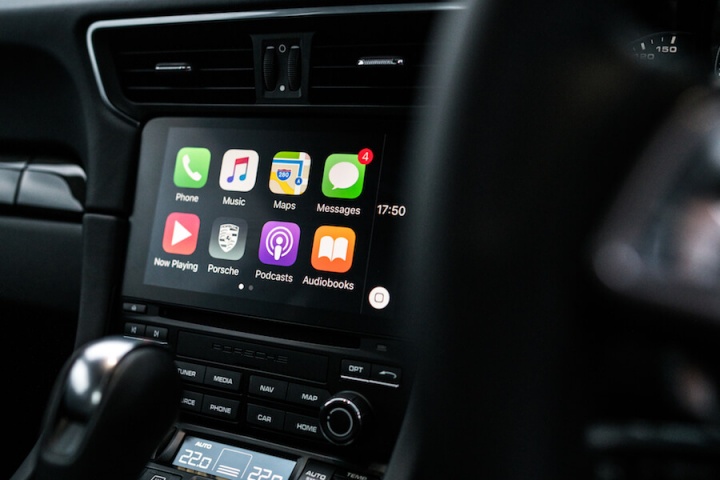 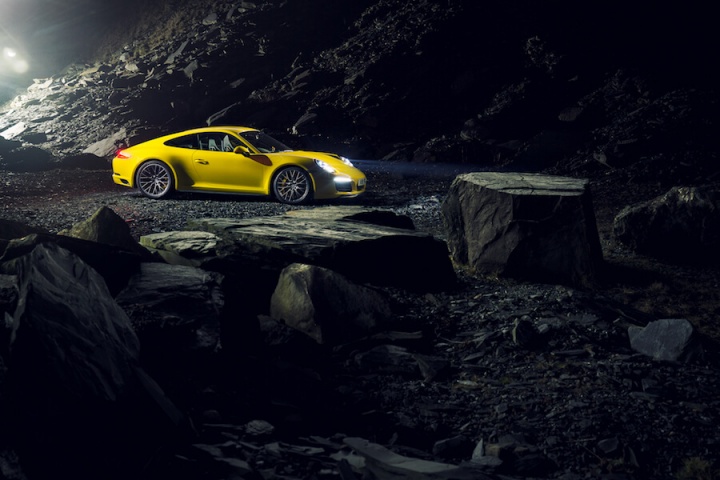 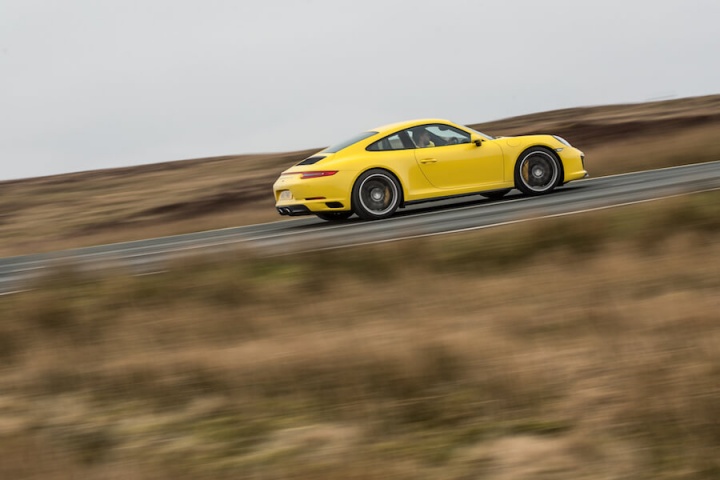 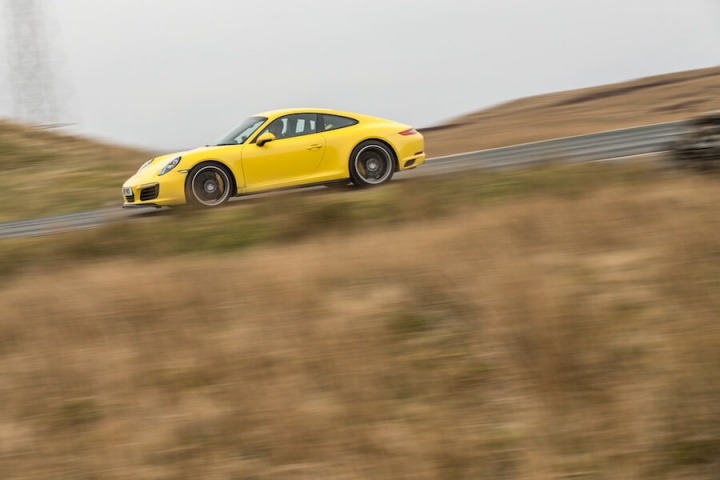 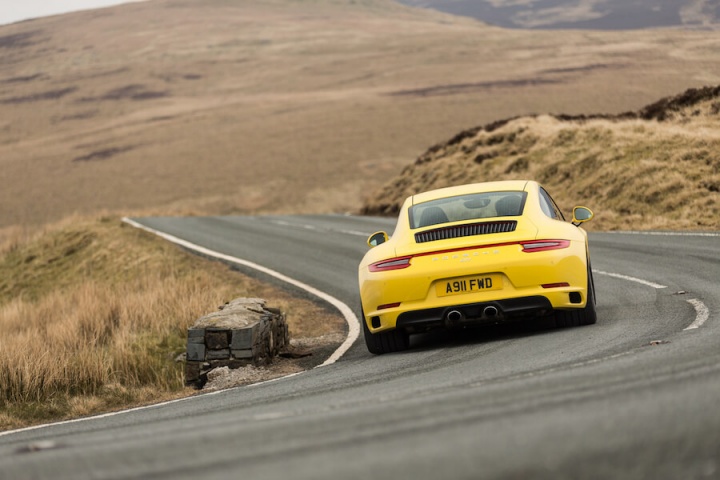 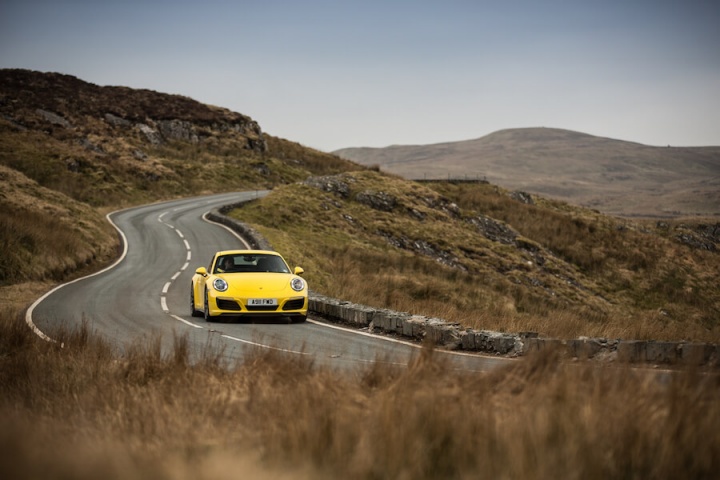 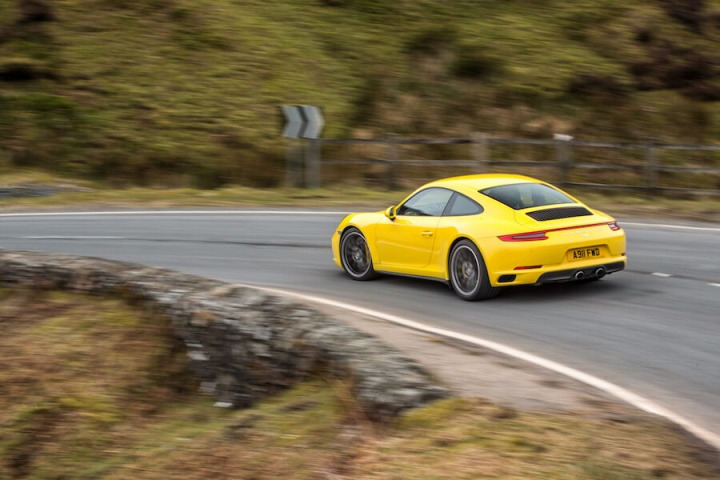 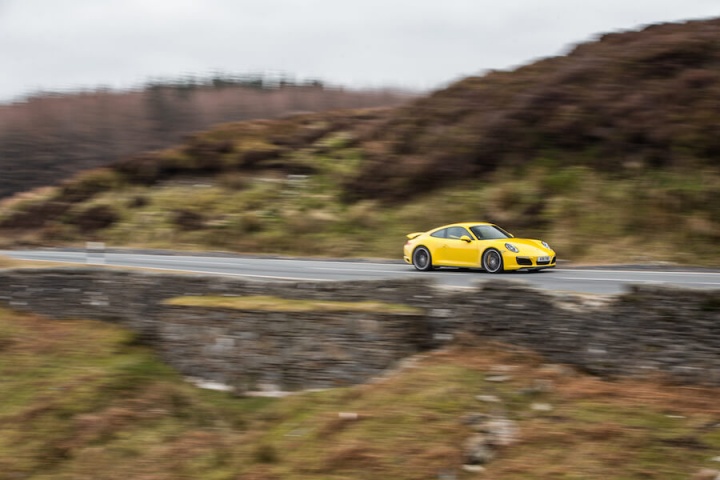 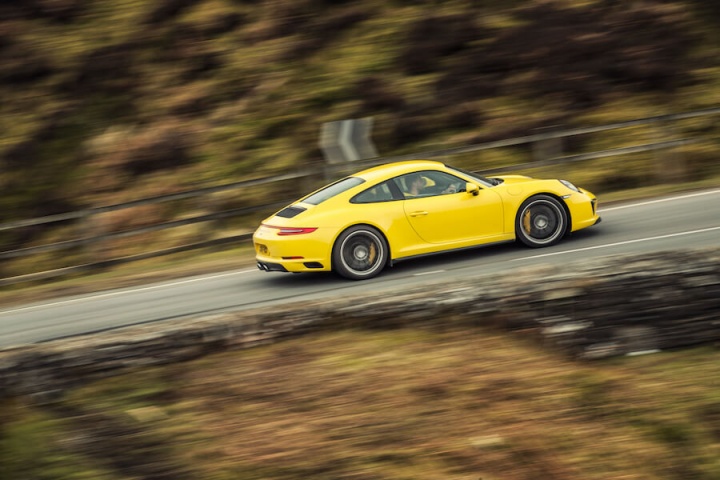 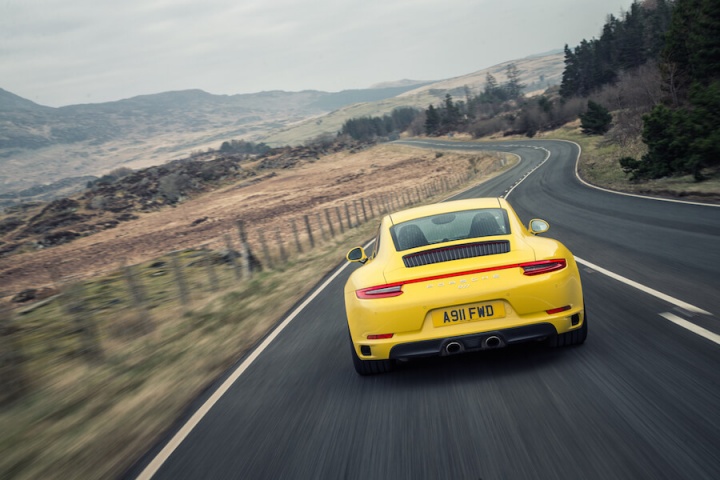 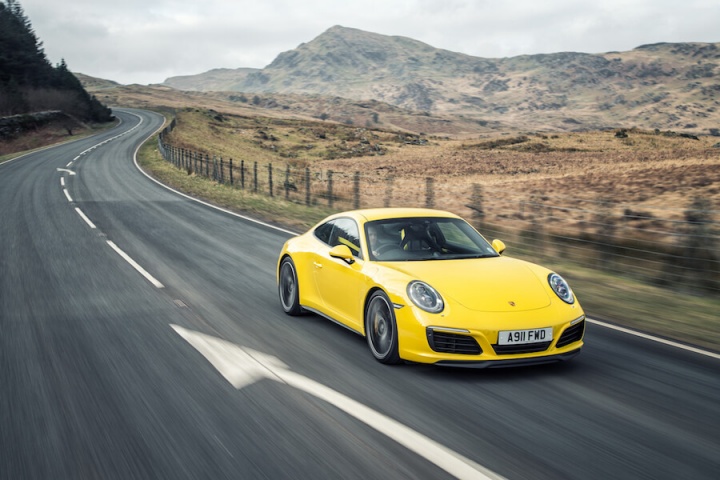 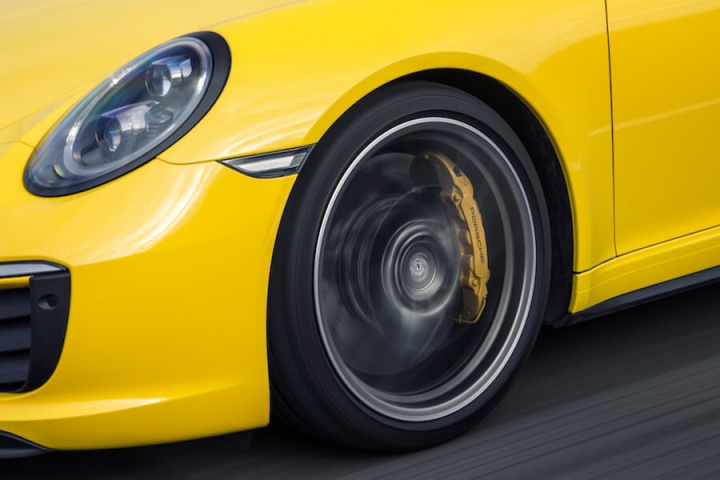 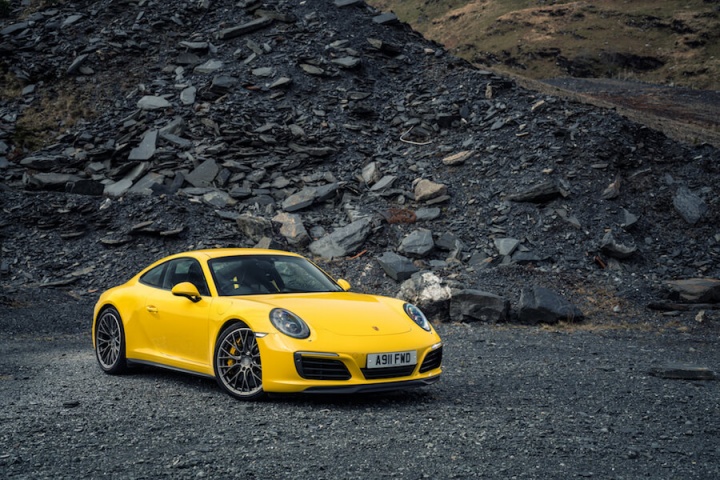 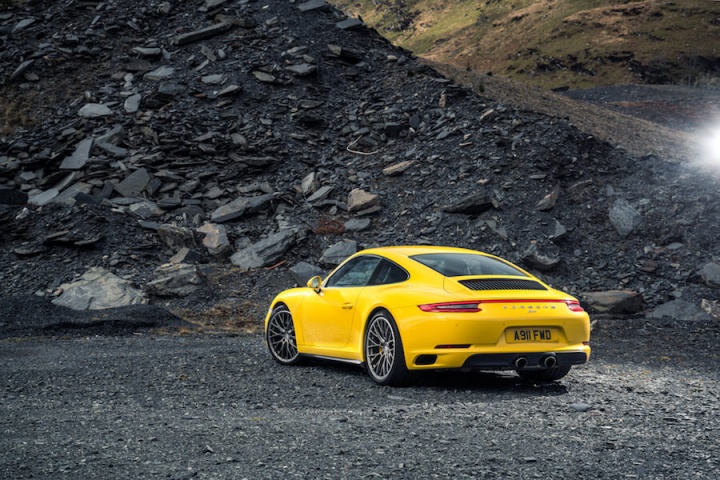 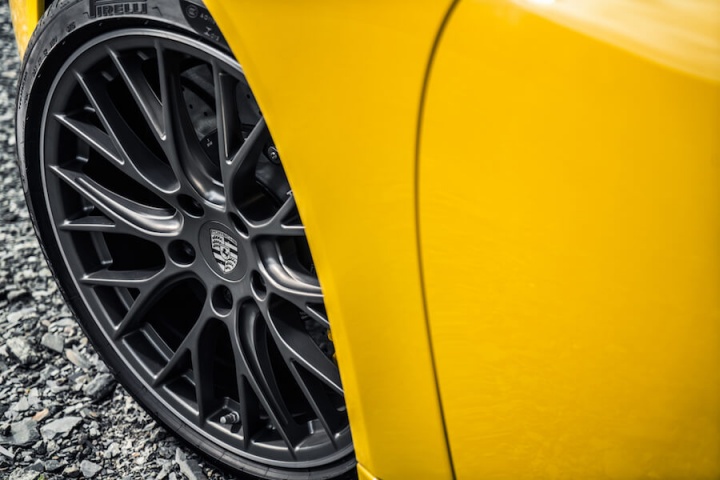 Porsche's timeless 911 gets another refresh, this time with all-turbo engines. Can it stay as characterful as ever?

Rather like Doctor Who, the more the Porsche 911 changes, the more it stays the same - true to the roots it set down back in 1963. Sure it's bigger, heavier, more complex, faster, quieter and now with an almost entirely-turbocharged engine line-up, but the essence is still there. In spades.

We all, by now, know the old clichés about Porsche's design department consisting of a photocopier and a Sharpie. A little bigger, a little smaller, the odd small tweak here and there - that's the Porsche way and only the anoraks (Martini-liveried anoraks, of course) can tell the difference between one generation of 911 and another.

Of course, this being effectively a mid-life facelift for the 911, you wouldn't be expecting any major changes but the truth is... that there aren't many. There are new headlights (which get piercing four-point LED daytime running lights), some tweaks to the bumpers, door handles and air intakes and a new grille for the engine cover, which also incorporates the now-traditional moving spoiler.

Inside, there has also been a very gentle massage of details, rather than a full-scale refit. There's a new touchscreen for the infotainment system, which comes with Apple CarPlay already plumbed in, and the number of confusing small buttons splattered down the centre spine of the cabin has been reduced, which is welcome. There's a new steering wheel too, which is, thankfully, entirely circular and hasn't succumbed to the flat-bottomed plague and inset into it is a small rotary switch that allows you to flick between Normal, Sport and Sport Plus modes for the engine, throttle and the electronic dampers of the now-standard Porsche Active Suspension Management system (PASM - Porsches loves a good acronym).

That switch, lifted from the 918 Spyder and clearly inspired by the Ferrari 'Manettino' control lacks the tactile qualities of the Italian button, and it's located in the wrong place (it would be better to have it on the left of the wheel hub, not the right), but it does have a neat trick if you opt for the Sport Chrono Pack and the PDK automatic transmission - in the middle is a 'push-to-pass' button, which, when pressed, tenses the engine, suspension, transmission and steering responses to give you the best possible acceleration for sharp overtaking moves. Neat.

More significant by far than all of this is the engine, though. Out goes the old Carrera S's naturally-aspirated flat-six 3.8-litre unit and in comes this new 3.0-litre twin-turbo. Note the small 't' - although almost all 911s will now be turbocharged in the interests of efficiency (save for a handful of limited GT and RS models using the old 4.0-litre non-turbo unit), the only 911s that will actually be called 'Turbo' are the big-banger 540hp 911 Turbo and 580hp 911 Turbo S. The new 3.0-litre engine sees some useful gains over the old 3.8, with an extra 20hp (now up to 420hp) and 60Nm more torque (now up to 500Nm) and Porsche claims that with the fast-acting twin-turbos, you won't notice that the engine is actually turbocharged.

And do you know what? It's damn near impossible to tell that this is a turbocharged engine. I expect if you were to drive one back to back with an old 3.8 Carrera S, you'd find some small degradation in throttle response, but on both the track (Porsche's own test track and customer centre located at the Silverstone Grand Prix circuit) and on the road I really struggled to notice.

It's also more refined than before, settling down to a nice, subtle backbeat at a cruise, although some serious tyre roar on less-than-perfect surfaces puts a dent in the 911's abilities as a grand tourer. It's pretty economical though - 32mpg on average is healthy enough even if we did see that plummet to 10mpg on the track. A Co2 figure of 199g/km doesn't seem too clever, but you can significantly improve on that by going for the optional seven-speed PDK dual-clutch automatic transmission.

And I would; the manual gearbox should always be the best Porsche gearbox, but the 911's seven-speed unit is just too awkward. It really is one ratio too many, and the tightly-packed gate means you often end up getting fourth when you were going for sixth, and vice versa.

To be honest though, that's less of a problem with this turbocharged engine because it has a wide, smooth flow of torque from pretty much anywhere in the rev range you choose. As long as you keep it switched to Sport mode, and tick the options box for the sports exhaust, it still sounds like a proper 911 too - snarling and popping on the over-run, and still giving that spine-tingling metallic howl as it passes 4.000rpm. Those who suggest that this turbo engine has lost the excitement and edge of the old naturally-aspirated flat-six are frankly being too picky, I feel.

The handling is still proper 911 stuff too. The steering in this four-wheel drive Carrera 4 feels great, a fraction short of where you'd ideally like it to be in terms of ultimate feedback, but still accurate and fast, and dependable. There's a little more weight thanks to the front driveshafts too, which makes it feel a touch meatier than the Carrera 2 at the nose.

On a dry day, certainly, it's just a matter of pointing the nose where you want to go and nailing the throttle - the 911's ancient tail-happy handling traits have long been eradicated and it's now as faithful and responsive as you could wish. Using Porsche's 'kick-plate' test at its track (which replicates the effect of hitting a patch of ice mid-corner) I can confirm that even with all the electronics switched off, the 911 comes nicely back into line with a quick armful or two of opposite lock.

And I would definitely go for the four-wheel drive option too. Purists will always say that the Carrera 2, with rear-wheel drive, is the right one, but as far as I'm concerned, we live on a damp, mossy rock poking out of the North Atlantic, and with our roads, you need all the backup you can get.

The asking price of €163,000 is a lot of money, especially considering how affordable the new four-cylinder Boxster and Cayman are going to be, and the 911 can really only offer the lure of its badge and the small back seats as reasons for finding the extra cash. That said, with a sub-four-second 0-100km/h run (assuming you spec it with a PDK gearbox) you are getting monstrous performance for your money, and rivals such as the Audi R8, Ferrari 488 and Lamborghini Huracán are far, far more expensive. Far, far more powerful too, but I'm not sure that they can really justify the extra spend over and above the 911.

Audi R8: current V10 model is far more expensive than a 911, but forthcoming V6 turbo should be closer in price and spec. It will have to work hard to be as enjoyable.

Jaguar F-Type V6 S AWD: stunning to look at and, with that supercharged V6, staggeringly quick too. Also has four-wheel drive, but it's not as practical and ultimately not as much fun as the Porsche.

Maserati GranCoupe: gorgeous and sonorous but big and heavy too. Can't come close to the 911's handling.

Porsche doesn't change much because Porsche doesn't need to. When you're already king of the hill, all you need to do is make sure that your crown is well-polished. The fact that the new turbo engine hasn't lost the character or responsiveness of the old naturally-aspirated flat-six just shows how on-its-game Porsche is right now. The 911 remains the benchmark for sports cars and even some super cars and it still blends an alchemic mix of practicality, performance and poise.