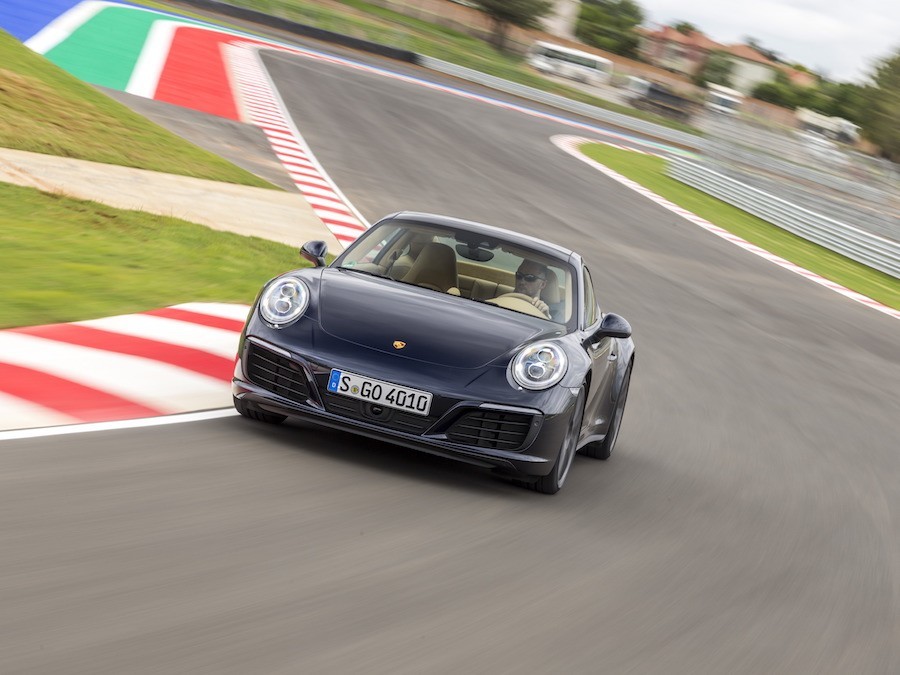 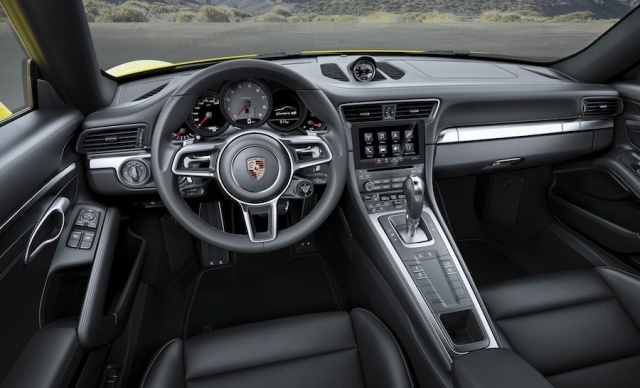 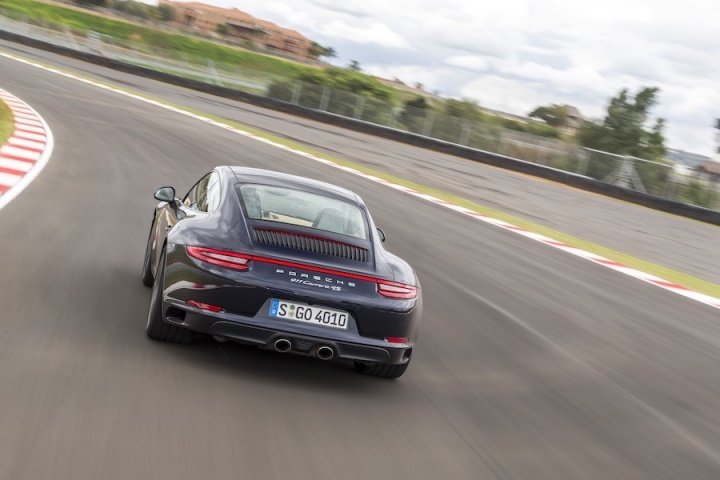 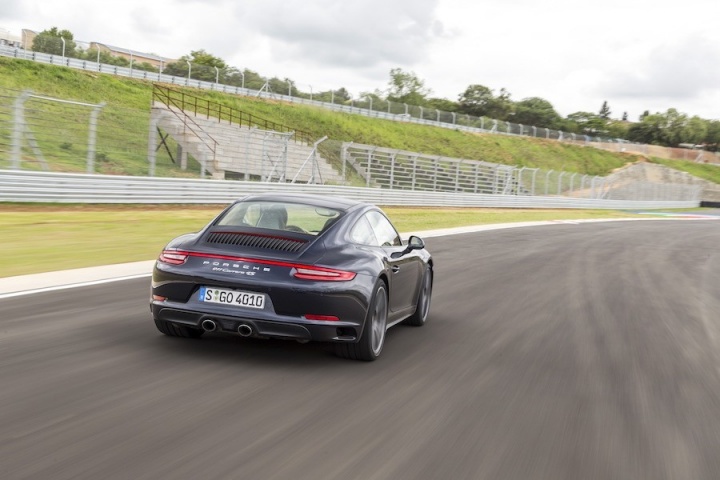 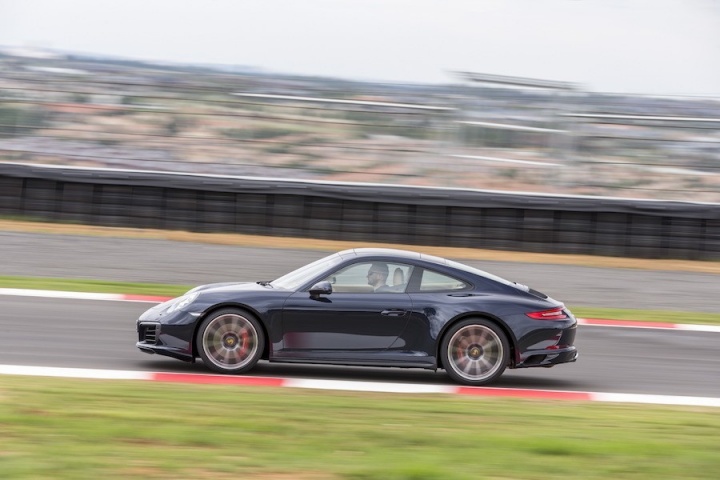 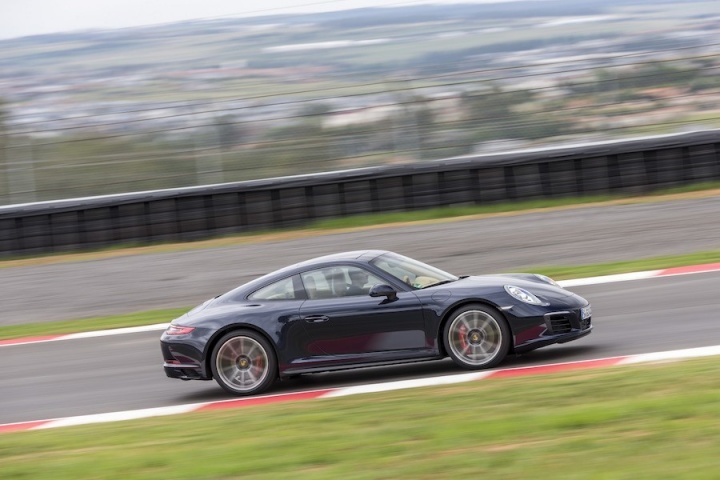 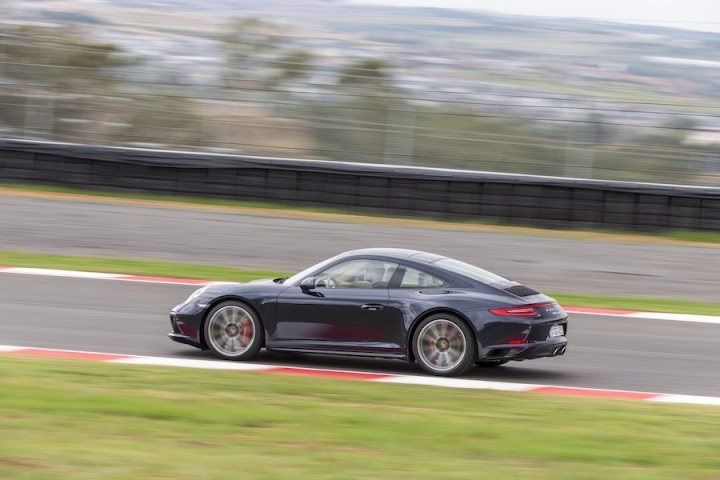 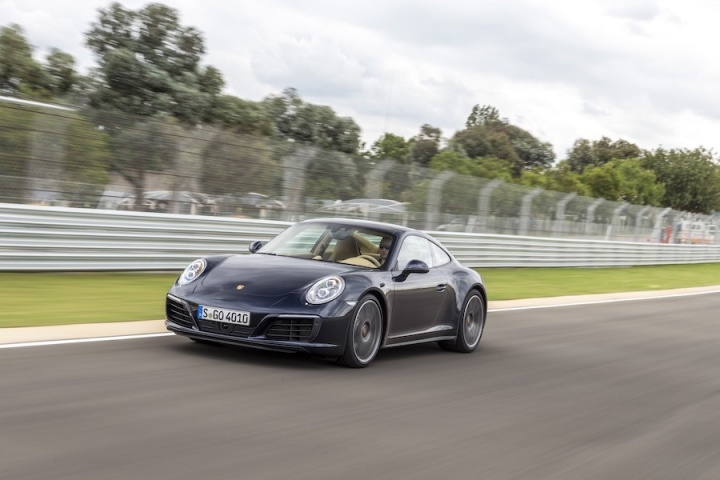 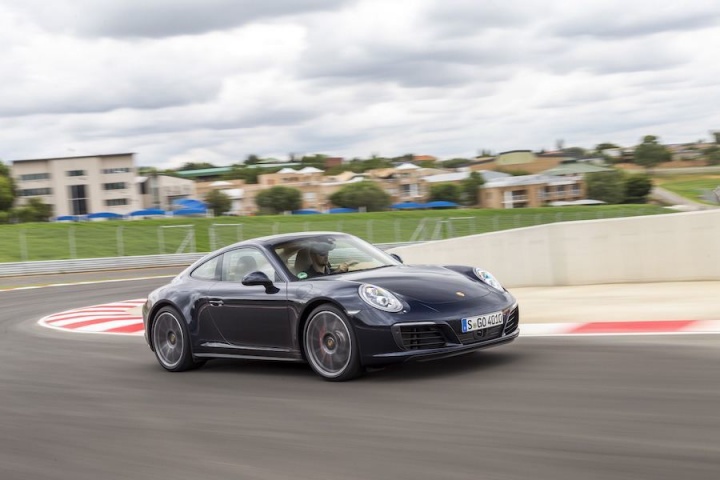 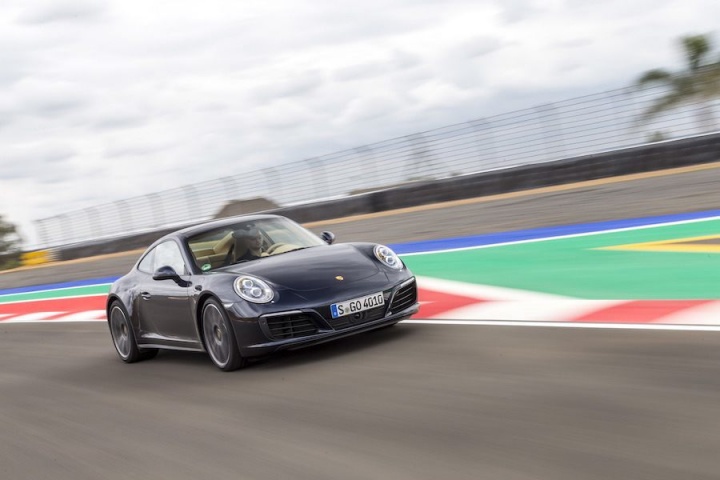 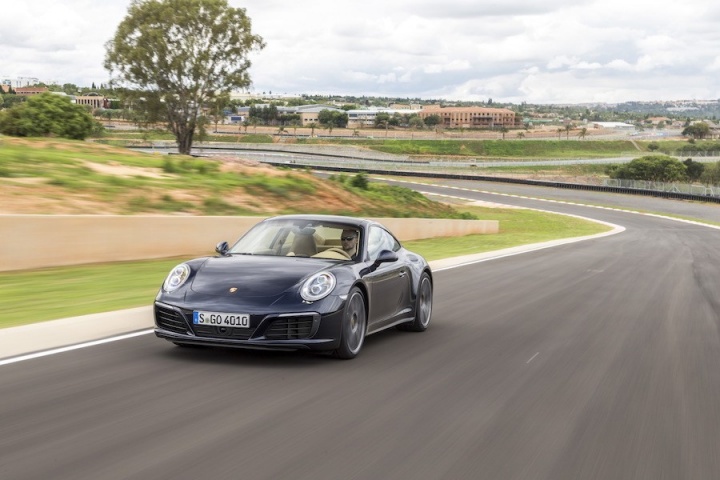 With the standard Porsche 911 Carreras now all featuring turbocharged engines it's time to wheel out the all-wheel drive Carrera 4 and 4S models with turbos, in the process bringing previous-generation 911 Turbo performance to the Carrera range.

Spot the difference, as Porsche's visual updating is never anything but subtle. The Carrera 4 and 4S adopt the styling revisions introduced on the standard, rear-wheel drive Carreras last year, though the 4's marginally wider hips (44mm in case you need to know) remain. That stretch at the rear is visually represented with the adoption of the Carrera 4's light bar that connects the main rear lights - those are now the same sculptural clusters found in the C4's rear-wheel drive relative. Both those new rear and front lights feature Porsche's four-point LED lighting signature, giving them a very distinctive look that's being wheeled out through the entire model line-up. There's an engine cover with vertical strakes that denotes the turbocharged Gen II 911s, as well as new door handles and, if you've ticked the option box (you should), the slightly in-board twin pipes of the Sports Exhaust that give the contemporary Carreras something of an old-school racer look around the rear.

No surprises inside either, the Carrera 4S gaining Porsche's new, much-improved touchscreen infortainment system, with improved connectivity, apps and standard satnav included. It simplifies the centre dash area, both visually and in operation and the seven-inch touchscreen is quick and easy to use. There's a new steering wheel design too, which, if you opt to pay for Sport Chrono, adds a 'Mode Switch' on the wheel for dialling up your preferred drive settings from Normal through Sport, Sport+ and Individual.

Every time Porsche makes an evolutionary leap with its 911 there are doomsayers, and that's been the case with the dropping of naturally-aspirated engines for the new 3.0-litre twin-turbo set up. It certainly makes for a slightly different 911 driving experience, which we found to our liking in the standard Carrera S, though as with any 911 today it's very dependent on how you specify it. The Carrera 4 and Carrera 4S models add four-wheel drive to the mix and it's something one in three 911 customers opt for. There's more reason than ever to do so now, as the PTM four-wheel drive system, adopted from the range-topping, lunatic-quick 911 Turbo model, in conjunction with the new twin-turbo 3.0-litre flat-six engine uses its traction advantage to deliver greater accelerative ability than its mere rear-drive relations.

That traction gain means a 0.1-second advantage in the 0-100km/h sprint, which, if you go for the PDK seven-speed automatic and Sport Chrono Plus, gives the Carrera 4S a 3.8-second time. To underline just how quick that is, it beats the 997-series 911 Turbo by 0.1 seconds to the benchmark speed. Choose that PDK transmission and you'll be happy, not least as it's quicker-shifting than ever and it's more efficient too. Impressive as that auto is, we'd take the tax hit and stick with a manual and three pedals. The money you'll save on the seven-speed manual (and a little bit more) can then be spent on the rear-wheel steering and the PDCC (Porsche Dynamic Chassis Control) with 20mm lower Sports suspension. Do that and you'll enjoy roll-free cornering allied with a ride comfort that's exemplary given the sizeable rubber footprint from the wheels and tyres. The gearshift has also been massively improved since Porsche adopted the Gen I GTS revisions to the shift. It's not perfect (the springing and accuracy from fifth through seventh is sometimes a touch clumsy), but it's good enough to not necessitate taking the PDK as a default choice.

Those critics of the new turbocharged 3.0-litre engine might miss the high-rev histrionics of the old 3.8-litre naturally aspirated unit, but for all their grumbling the blown 3.0-litre isn't lacking in free-revving urgency. But now it's underpinned with peak torque that arrives as low as 1,700rpm, making the Carrera 4S an easier, quicker drive more of the time. That allows you to enjoy its performance more readily, and there's still incentive to wring it to its redline, the optional sports exhaust creating the right sort of sonorous, characteristic flat-six cacophony when you do so. The greater flexibility masks some of the manual's shortcomings, too, as there is less need to hurry the gearbox to make decent progress. But then we knew that already, having experienced it in the new Carrera S.

What is significant is that the four-wheel drive system in the 4S doesn't detract from the driving experience in any way. There's no obvious point where you feel it diverting drive to the front wheels, just the reassurance that the sophisticated electronic control and torque vectoring is doing its job to maximise the available grip and traction and enable the Carrera 4S its scintillating pace. The biggest compliment is that it retains a rear-wheel drive feel, and is utterly 911-like in its character, the unique engine position and the resultant weight-shift enabling it to be backed into faster bends on track and driven through with neutrality or in a glorious four-wheel slide. You'll be doing well to approach anything like its limits on the road, though there are rewards to be had, not least from the revised steering system, which adds some feel now to its speed and accuracy. Add the always-reassuring feel and bite from the middle pedal, the choice of driver modes and variable thresholds of stability and traction control intervention and the C4S proves an engaging, adjustable, extremely fast and capable sports car. Undeniably, it's a subtly different 911 experience, but not a lesser one, especially when you're looking at the numbers.

You're buying a sports car here with figures that would have justified supercar status previously. The Carrera 4S gains some useful equipment in its Gen II guise, not least standard satnav and telephone connectivity, Porsche finally catching up in the smartphone integration race... There is still plenty of opportunity to personalise, and a few of the tick-boxes we'd suggest are necessary for the ultimate Carrera 4S experience - the sports exhaust and sports chassis among them. Unlike any of its rivals it's a genuinely useable sports car, one that really can be used as a daily driver. If we had one we'd be taking the long route to work in the morning though.

Aston Martin V8 Vantage: ancient, but oh-so pretty, the Aston Martin Vantage has evolved alongside the 911, yet Darwin would be heavily backing the German car; as would we, as the Aston feels like a dinosaur in comparison.

BMW i8: the i8 isn't a natural rival, but it has four-wheel drive, is turbocharged and err... a hybrid. We hear that most i8 drivers have a 911 in the garage too, so take your pick depending on your mood, you lucky blighters.

Nissan GTR: Nissan's techfest GTR is a 911 Turbo-chaser, but for all its digital cleverness and undeniable pace, it's a different and not necessarily better, animal to the 911 Carrera 4S.

This is the first 911 Carrera 4 we'd genuinely consider over its rear-wheel drive relation. The traction advantages the C4S brings and the added reassurance that delivers in variable conditions, greater pace and the subtle, yet effective, styling changes add up to a hugely appealing car. We'd forgo the PDK transmission's ease and 997 Turbo beating pace for the manual car's interactivity. Those complaining about the turbocharged engine changes today will be singing its praises when Porsche next makes an evolutionary engine leap. The greater torque, improved efficiency and increased flexibility it brings are more relevant to more buyers more of the time than the high-revving 3.8-litre naturally aspirated flat-six it replaces.