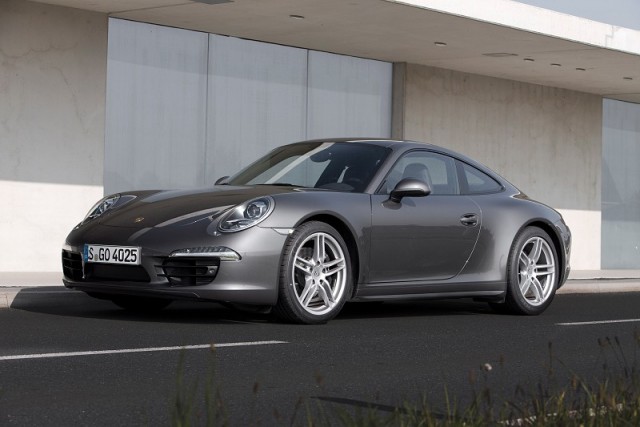 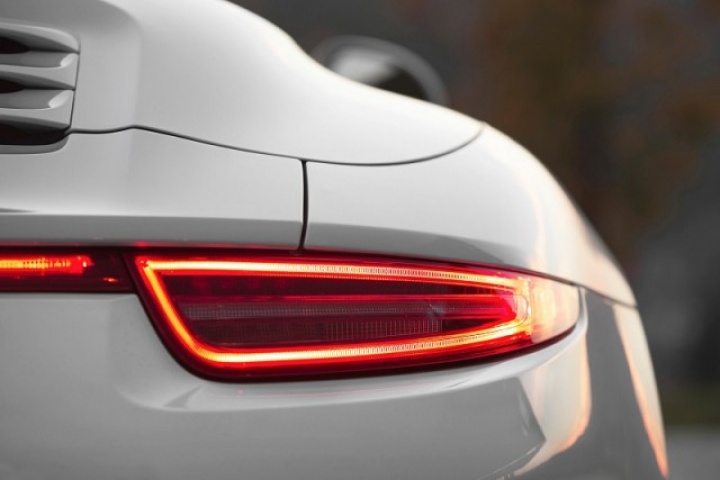 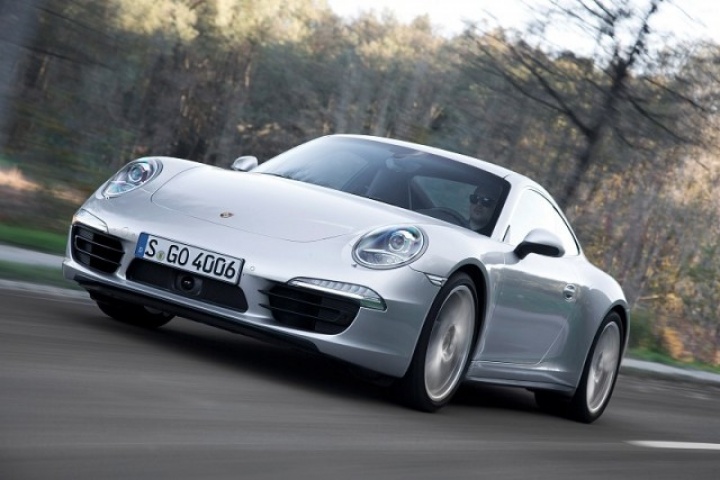 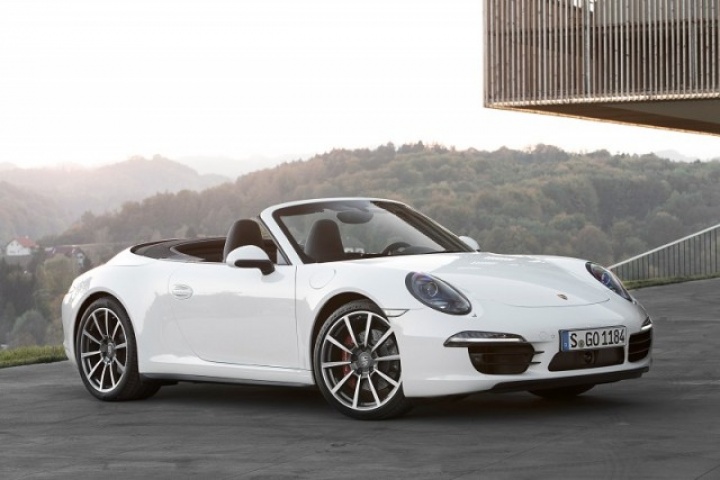 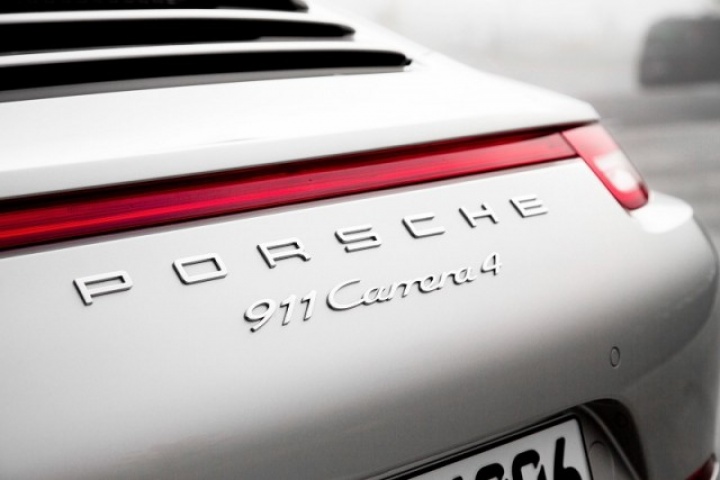 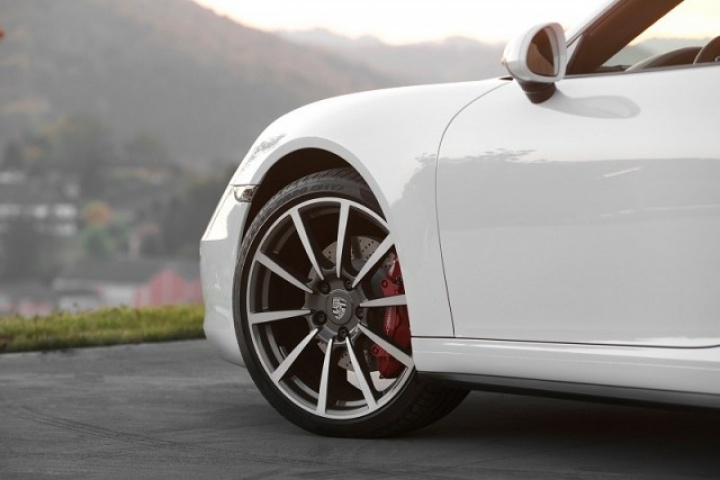 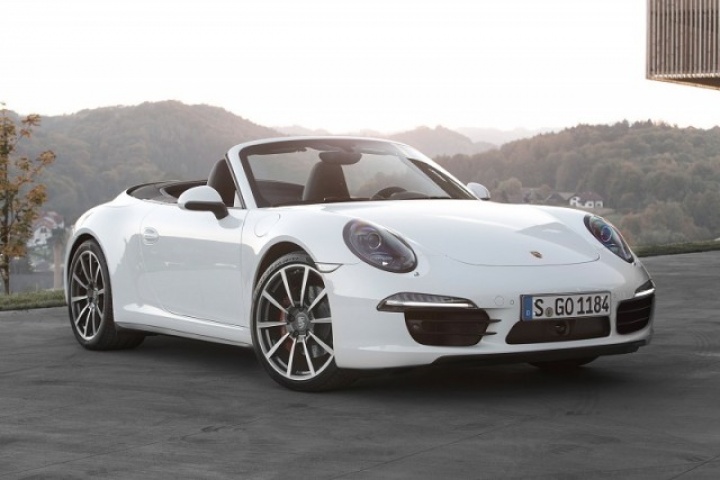 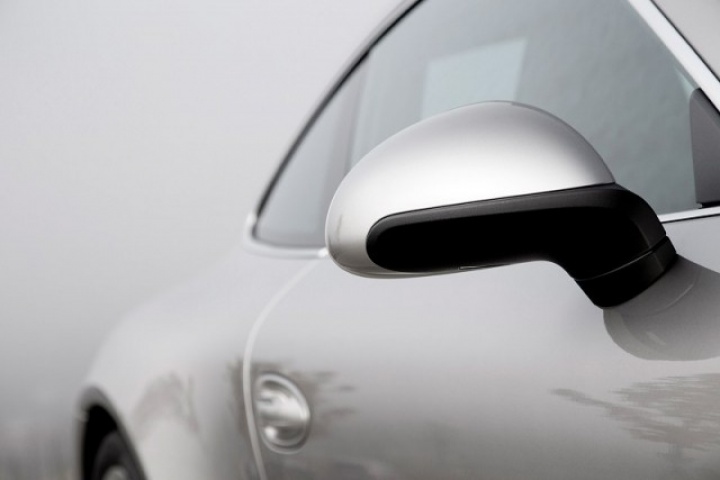 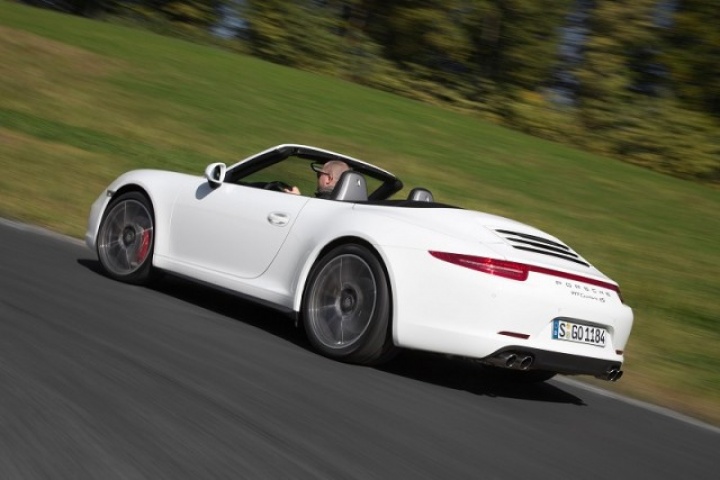 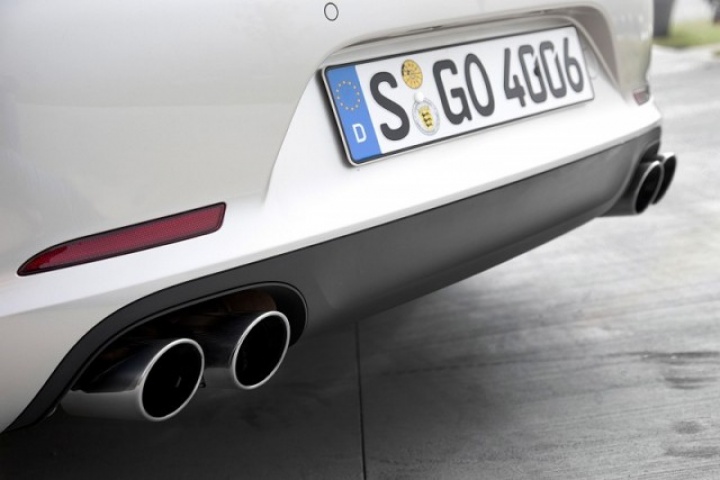 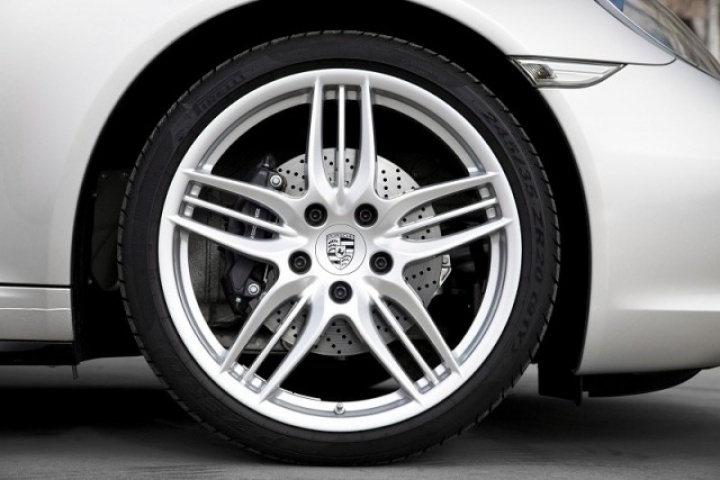 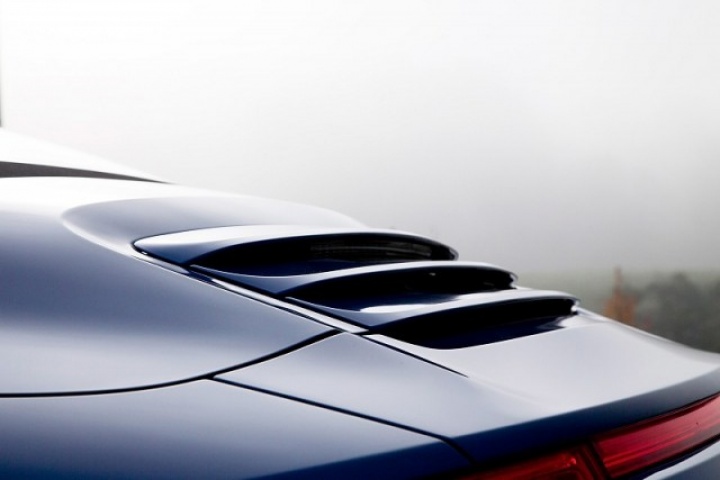 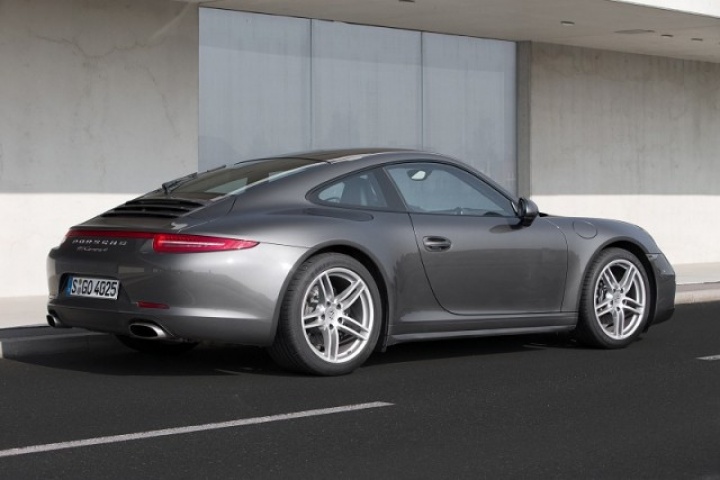 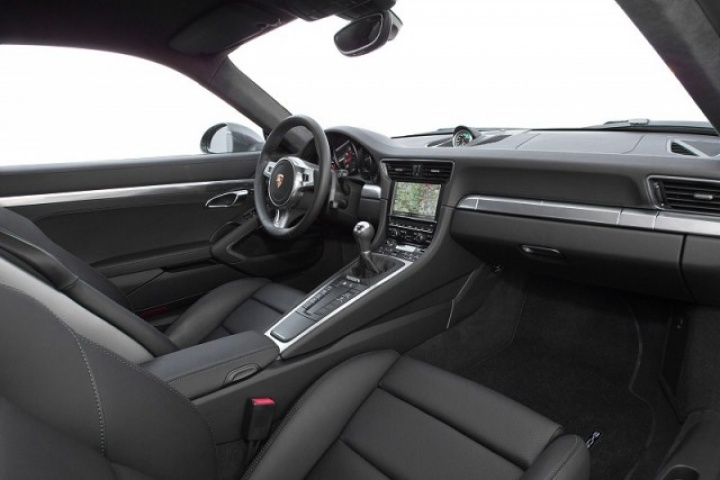 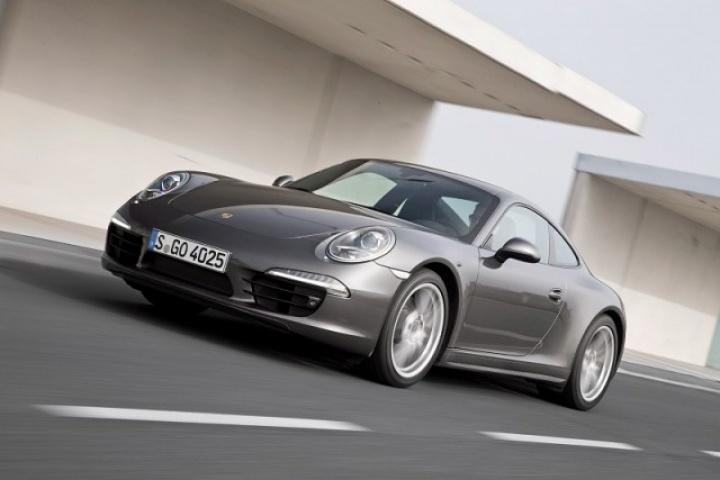 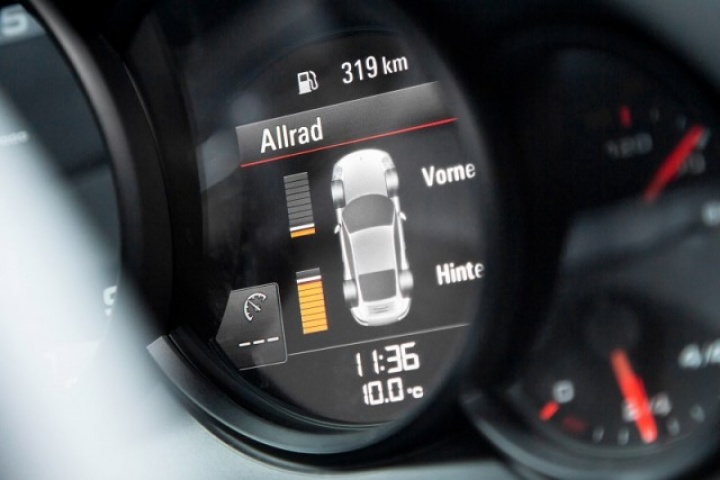 While the evergreen Porsche 911 is renowned as a rear-drive sports car, the four-wheel drive Carrera 4 model still accounted for a significant 34 per cent of sales of the 997-generation model, so it's no wonder Porsche quickly wheeled the new one out. As ever it aims to bias drive to the rear and, like the rest of the line-up, is lighter, faster and more efficient than before.

As before, the Porsche 911 Carrera 4 is distinguished from its two-wheel drive counterparts by extended rear bodywork. The arches are stretched by a significant 22mm on each side and they cover rear tyres that are 10mm wider. The taillights are joined by a red band too and this time it lights up, giving this variant a highly distinctive look.

There's nothing new inside, which means a high quality feel all round, a fantastic driving position, acceptable room in the rear (so along as the front seat occupants aren't too tall) and even some luggage space behind the back seats. We'd highly recommend the carbon-backed bucket seats too.

Porsche set a particularly challenging 160-kilometre test route for our drive of the 911 Carrera 4, with steep ascents and descents, endless sweeping bends, a myriad of surface and camber changes, plus a sprinkling of tight up- and downhill hairpins to keep things really interesting. It was wet at times under the trees, bumpy at others in the middle of fast sweeping corners and the brakes were tested on the long, quick downhill sections. Why are we telling you all this? Because the Carrera 4 took it all in its stride while making the driver feel like he was responsible for the elevated pace. This really is a fabulous bit of kit.

Don't waste your money on the PCCB carbon brakes unless you are likely to regularly bring your car on track, as the standard steel set-up is faultless. Meanwhile, while some criticised the electromechanical steering at the initial launch of this model, but we found little to complain about. It's direct, feelsome and linear in response. The 350hp engine thrives on revs (and indeed, if you step out of the Carrera 4S you'll miss that car's mid-range grunt) so there's usually more grip than you require. Even so, how early you can get on the power in this car never ceases to amaze. With water on the road (and some provocation) the Carrera 4 can be cajoled into a controllable slide and though you can sense torque going to the front axle to help pull the car through the corner, there's enough going to the rear wheels to give it that rear-drive feel. It's hugely capable regardless and should be a ballistic cross-country car in winter.

By all means test both PDK automatic and the seven-speed manual versions of the 911, and while we have to admit that the dual-clutch system has never felt sharper, we'd still have the latter. The gearchange may not be quite as mechanical as the six-speeder of old, but it's still deliciously tactile, if odd at first to be looking for seventh gear when you hit the motorway.

Speaking of which, it's worth reiterating how comfortable and refined the new 911 is when you need it to be. But thankfully we didn't very often on our test route.

From launch the four-wheel drive hardware will be available in the 911 Carrera and Carrera S in both coupé and Cabriolet guises. The entry-level version tested here starts at €134,395, the Carrera 4S costs €160,856 (with a manual gearbox) and the respective Cabriolets are €149,329 and €176,693. Because of the Irish tax banding, the Carrera 4S is priced lower when equipped with the PDK transmission, so it costs €155,819 as a coupé or €170,755 as a Cabriolet. Standard equipment includes a full leather interior, an excellent infotainment system with satnav and Bluetooth etc, climate control and bi-Xenon headlights. A Thatcham Category 5 tracker is also included and all buyers get a free course at the Porsche Experience Centre at Silverstone.

The arrival of the Carrera 4 marks the addition of a sliding glass sunroof to the options list for the whole line-up.

A new feature of the 911 Carrera 4 is the addition of a display for how the Porsche Traction Management (PTM) system is apportioning the engine's output. That may be a little distracting, which is where the new Adaptive Cruise Control (ACC) could come in handy... It is now available across the 911 line-up and when specified in conjunction with the PDK transmission it features Porsche Active Safe (PAS), which can stop the car automatically at low speeds to prevent front-end collisions.

Porsche has also altered the Sport Plus mode in the Sport Chrono pack for the manual models. Now the software automatically blips the throttle during downshifts. At first we reckoned we'd like to do this for ourselves, but it's so well-judged that you soon let it get on with it. Interestingly, turning off the traction control disables this feature.

Purists may still prefer to have a Porsche 911 that sends all of its power to the rear wheels, but really, there's very little compromise in the Carrera 4, as it feels nigh on identical to the two-wheel drive model most of the time and yet it broadens its safe operating window for when the weather is less than ideal. Sublime.