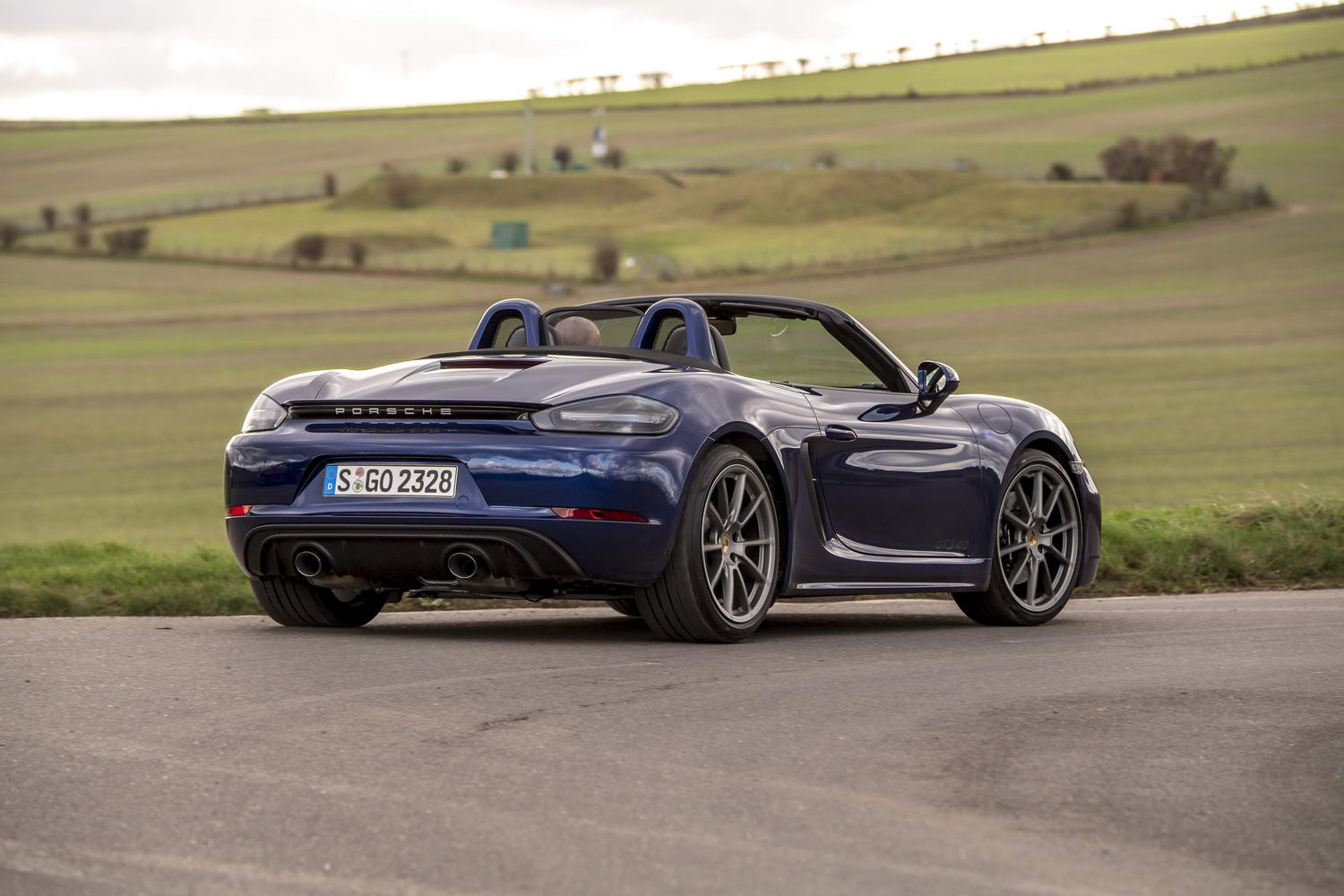 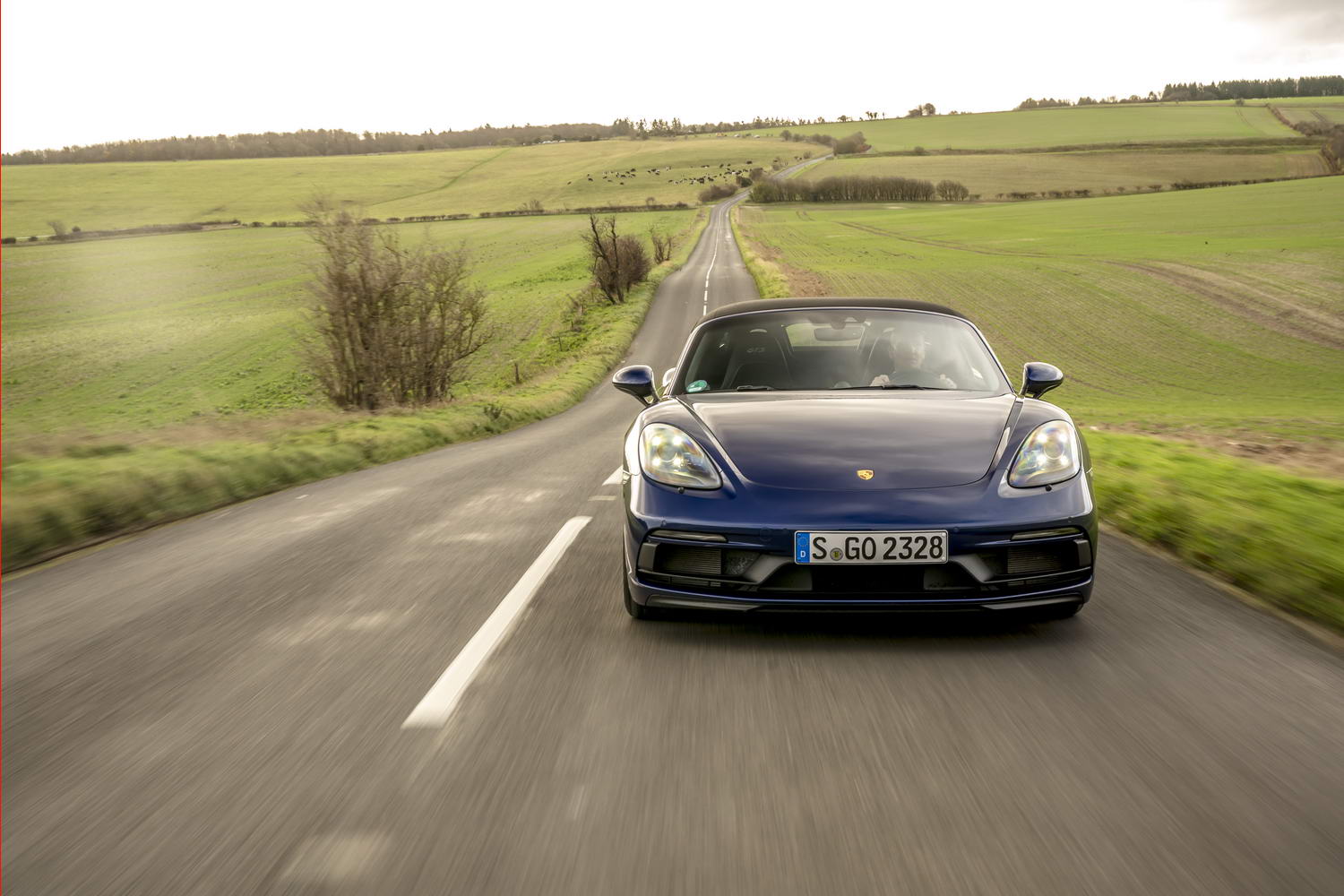 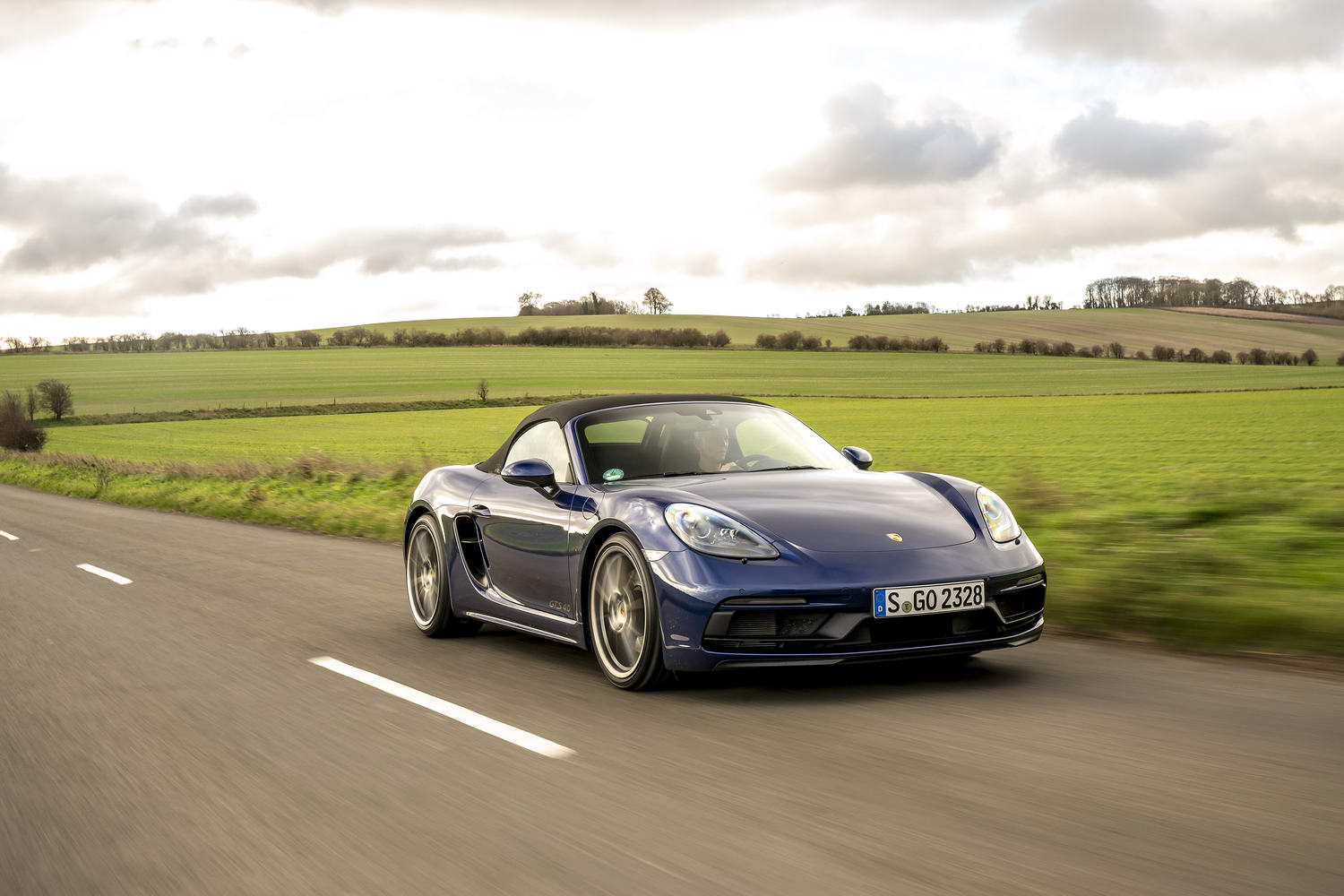 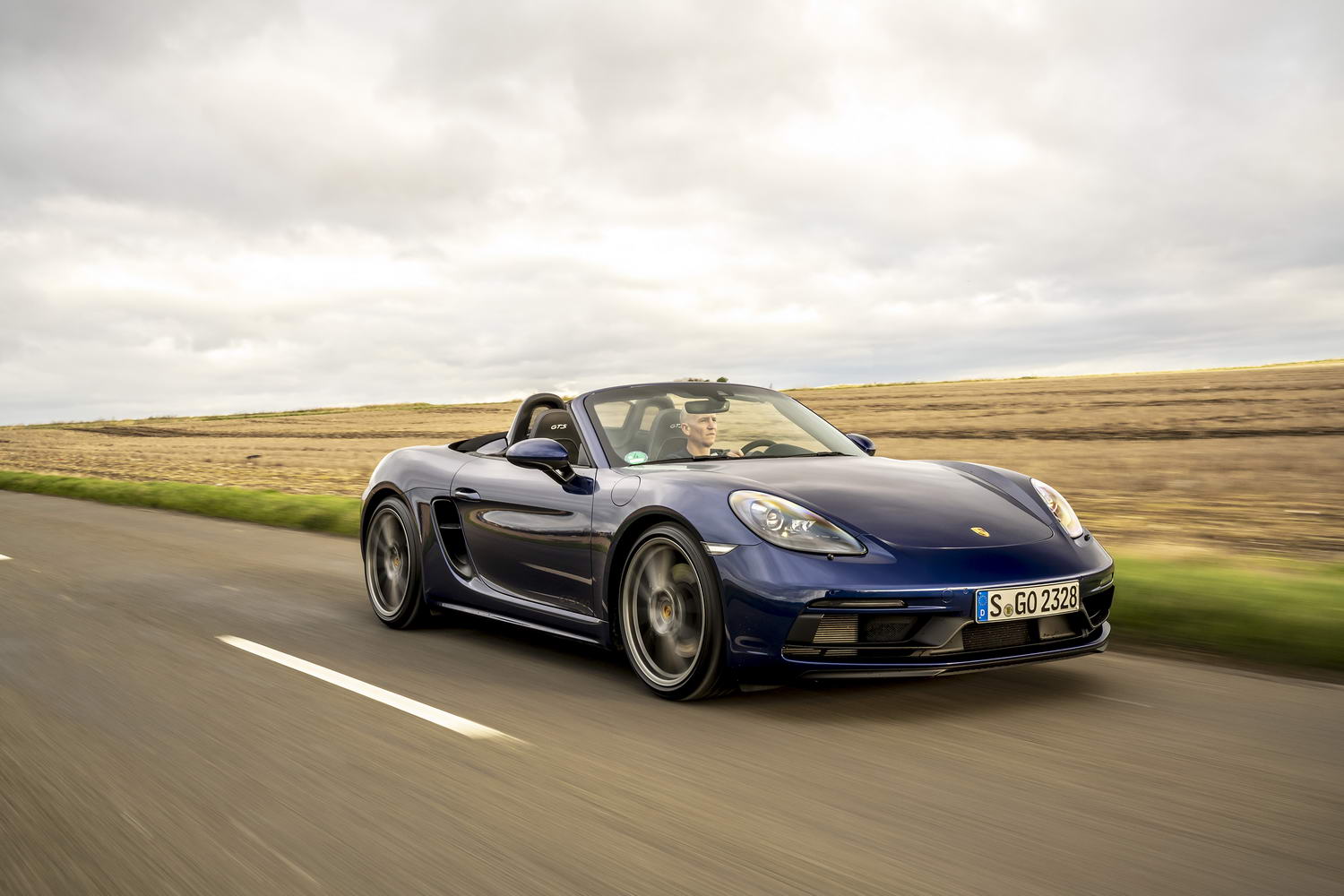 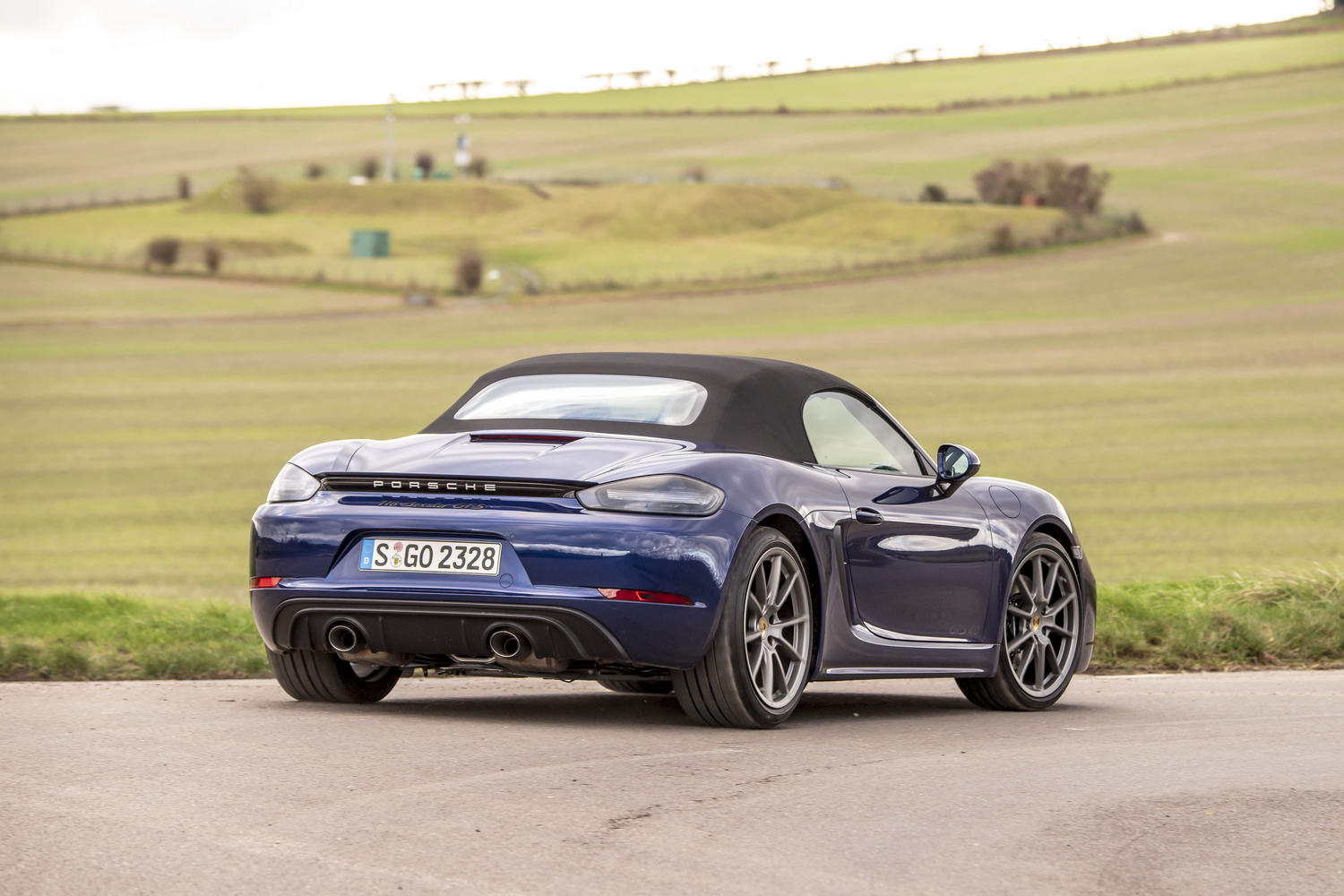 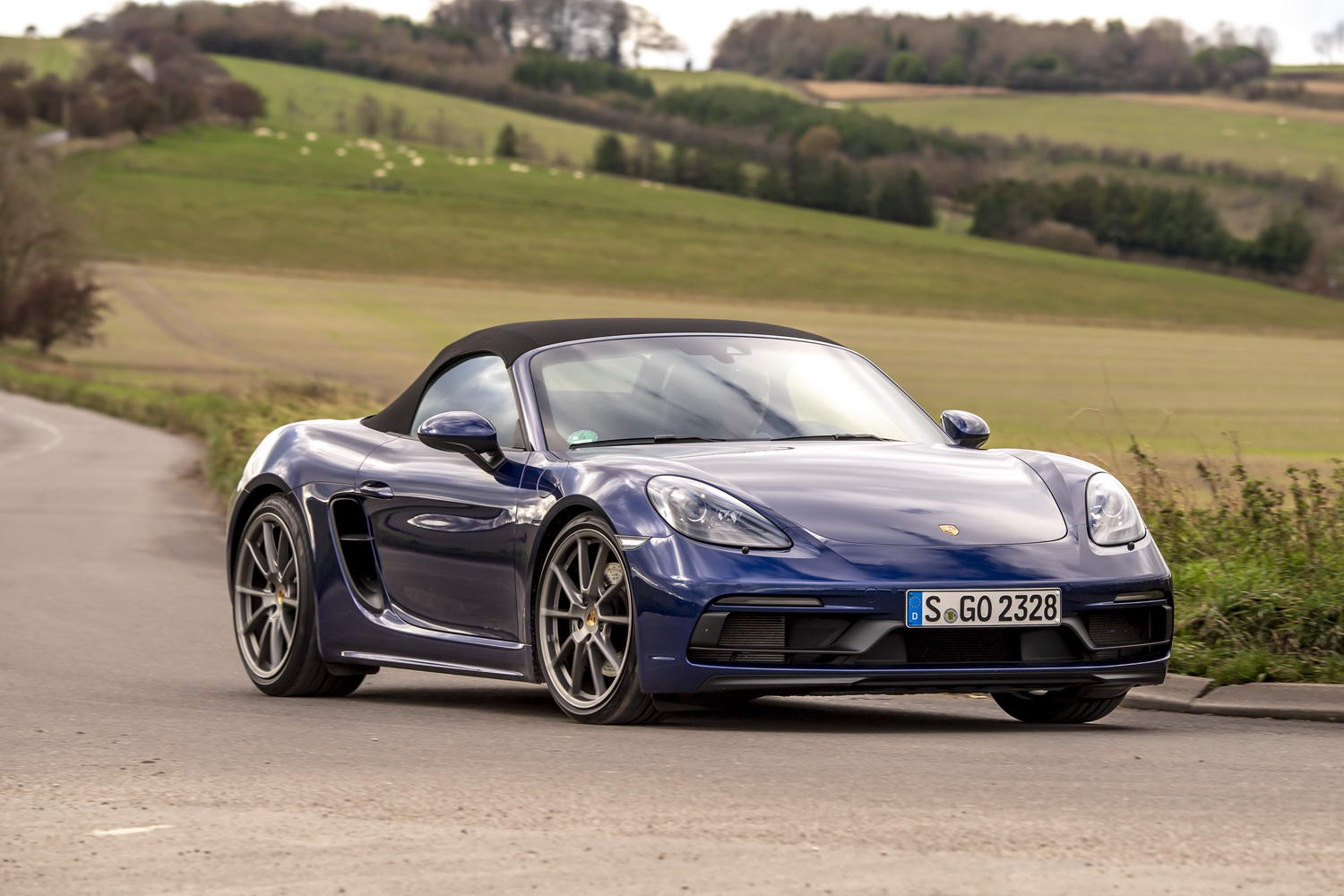 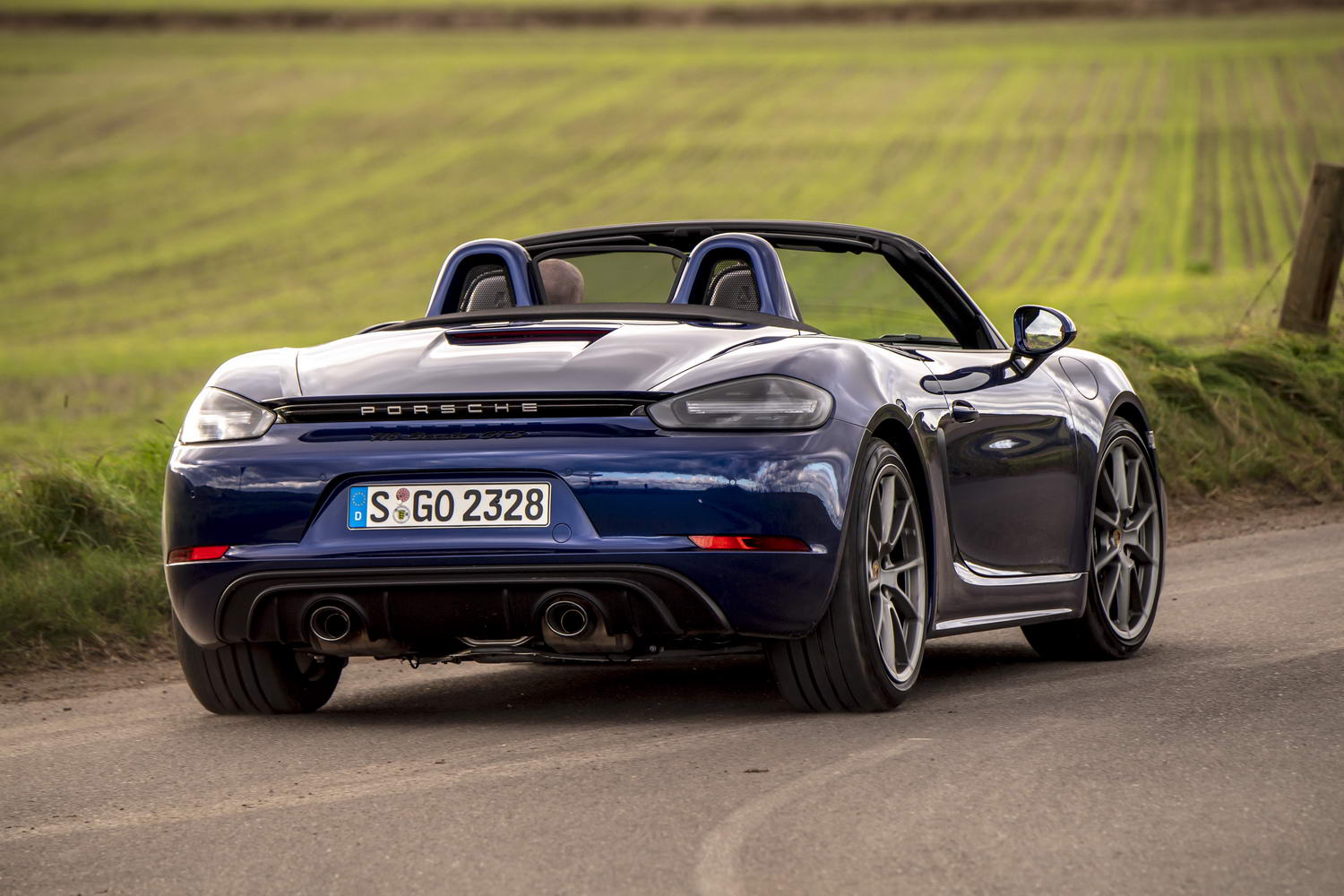 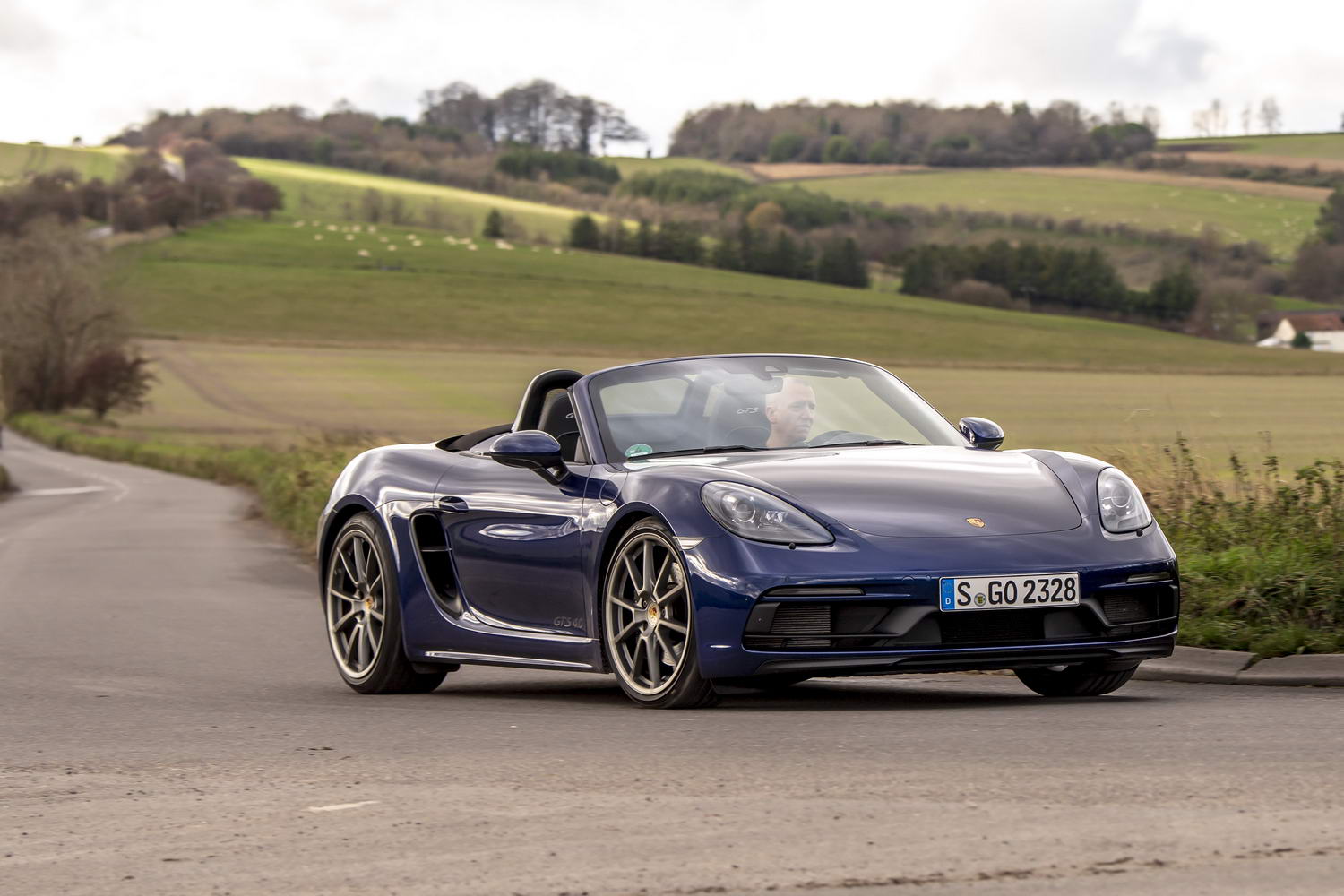 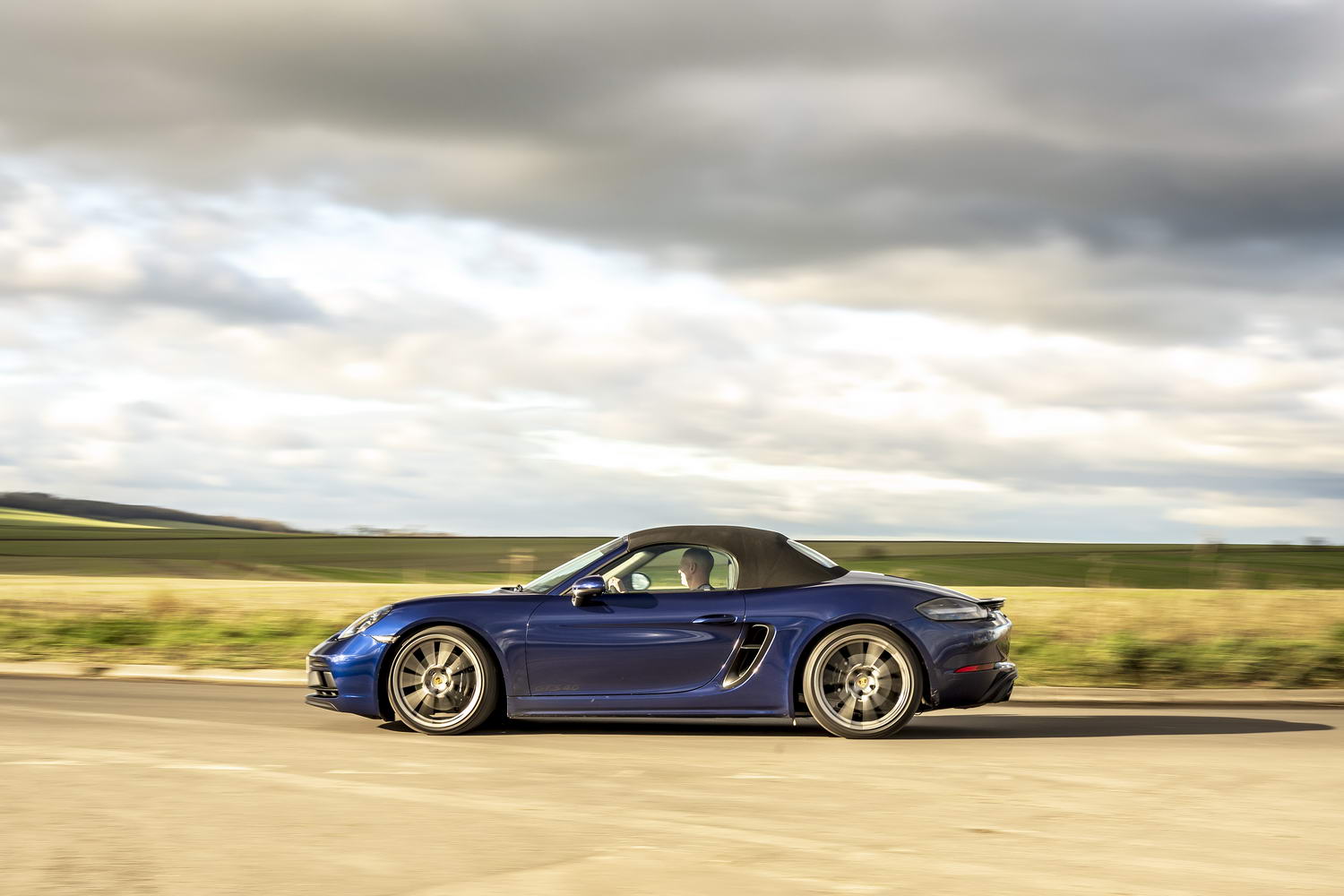 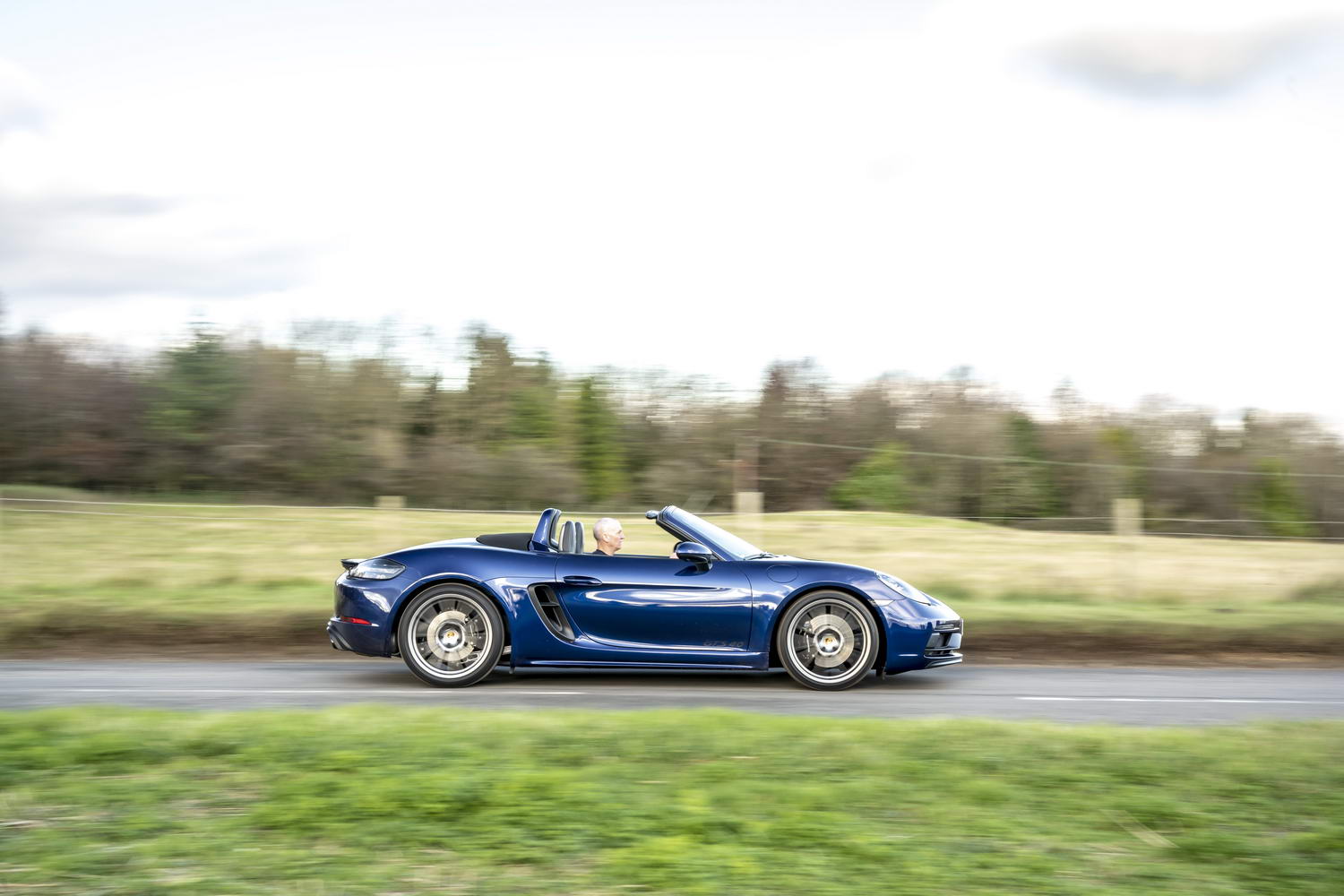 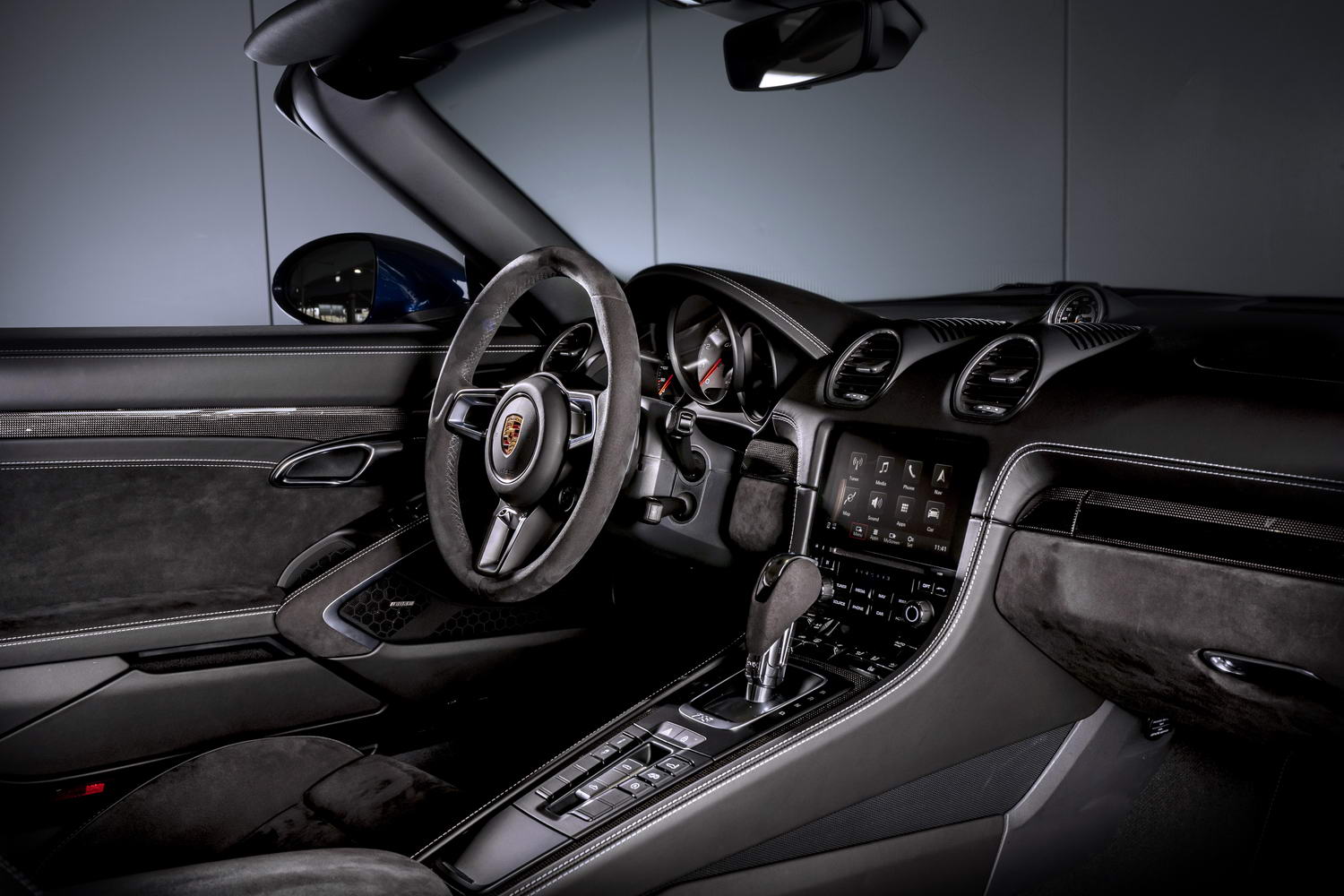 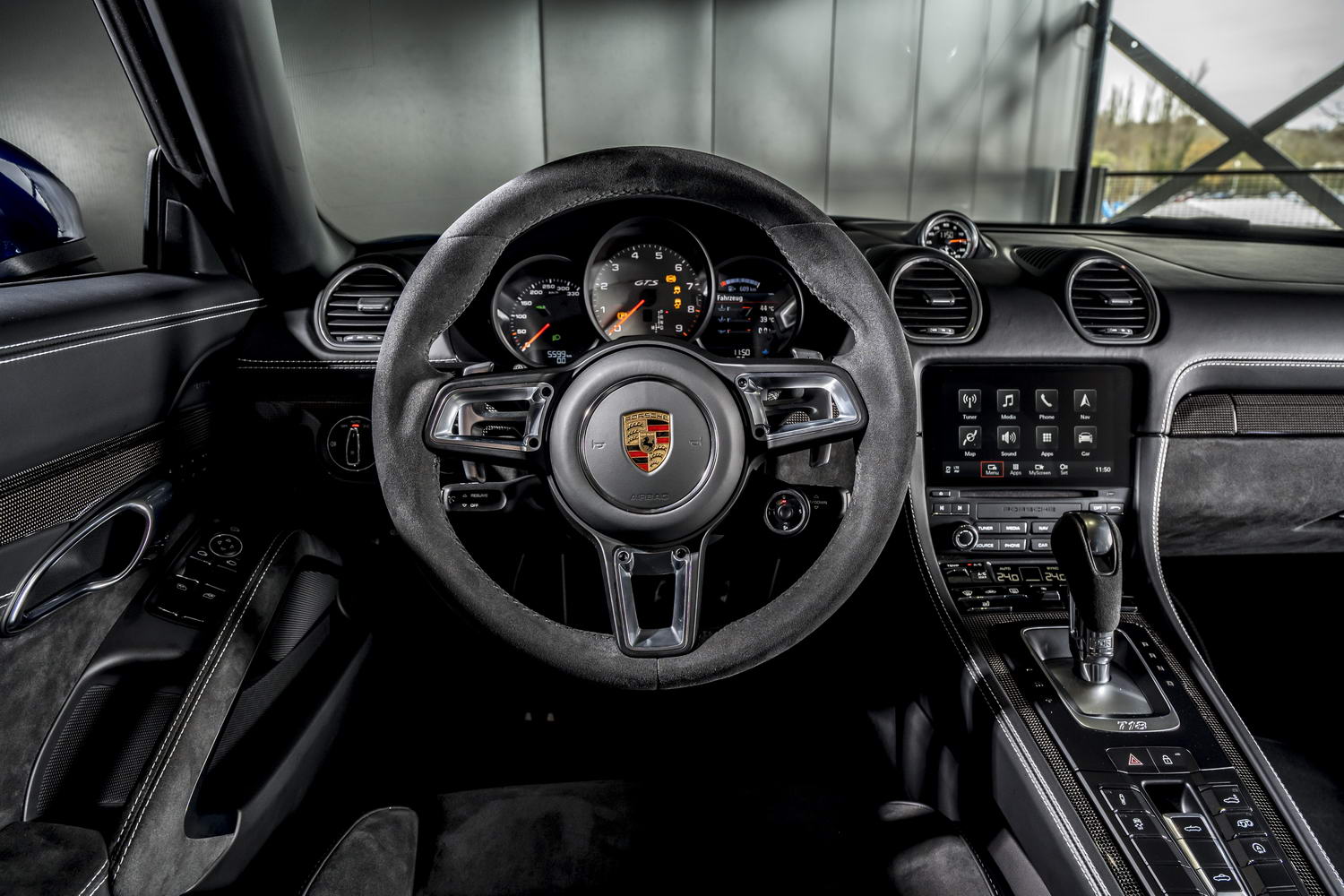 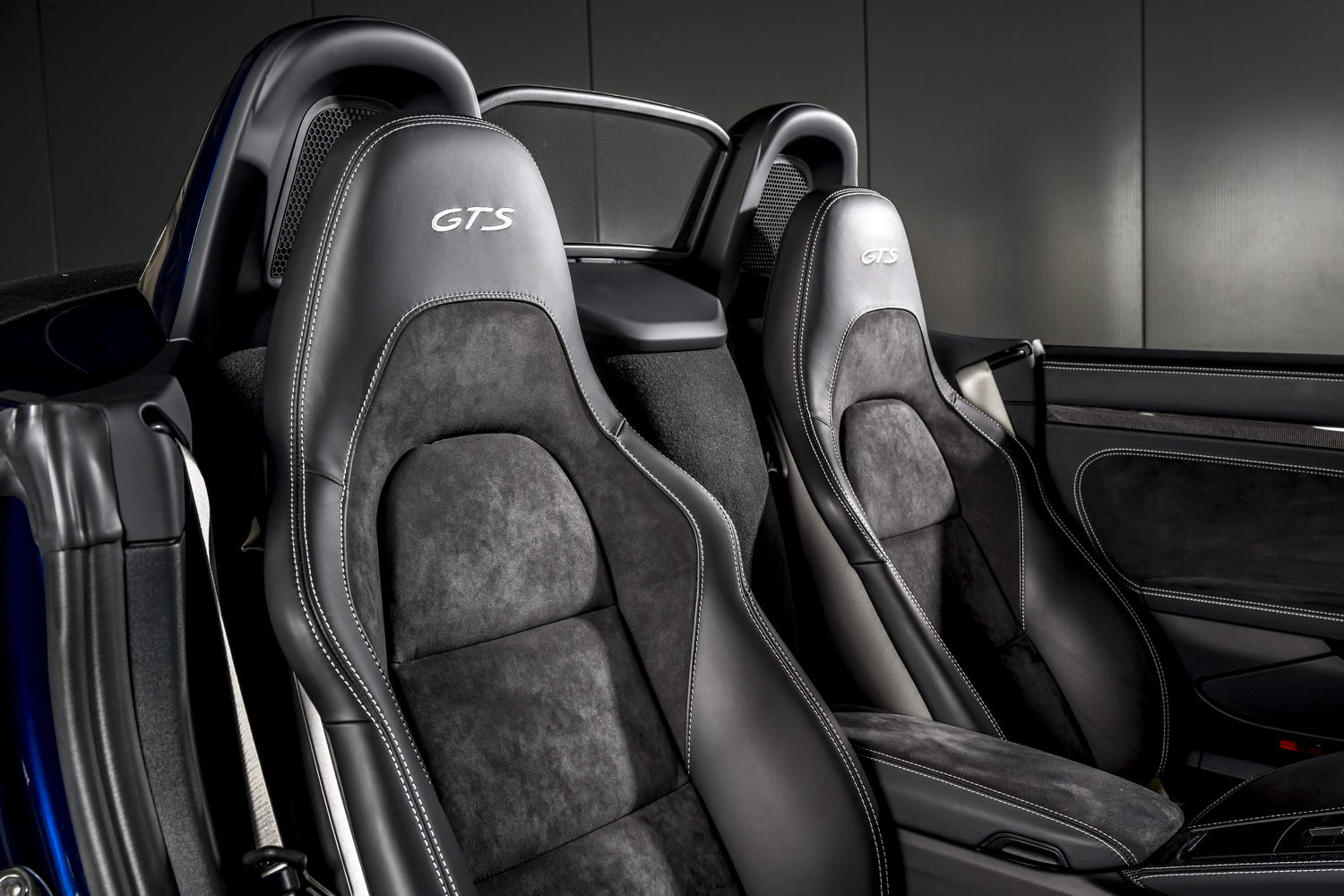 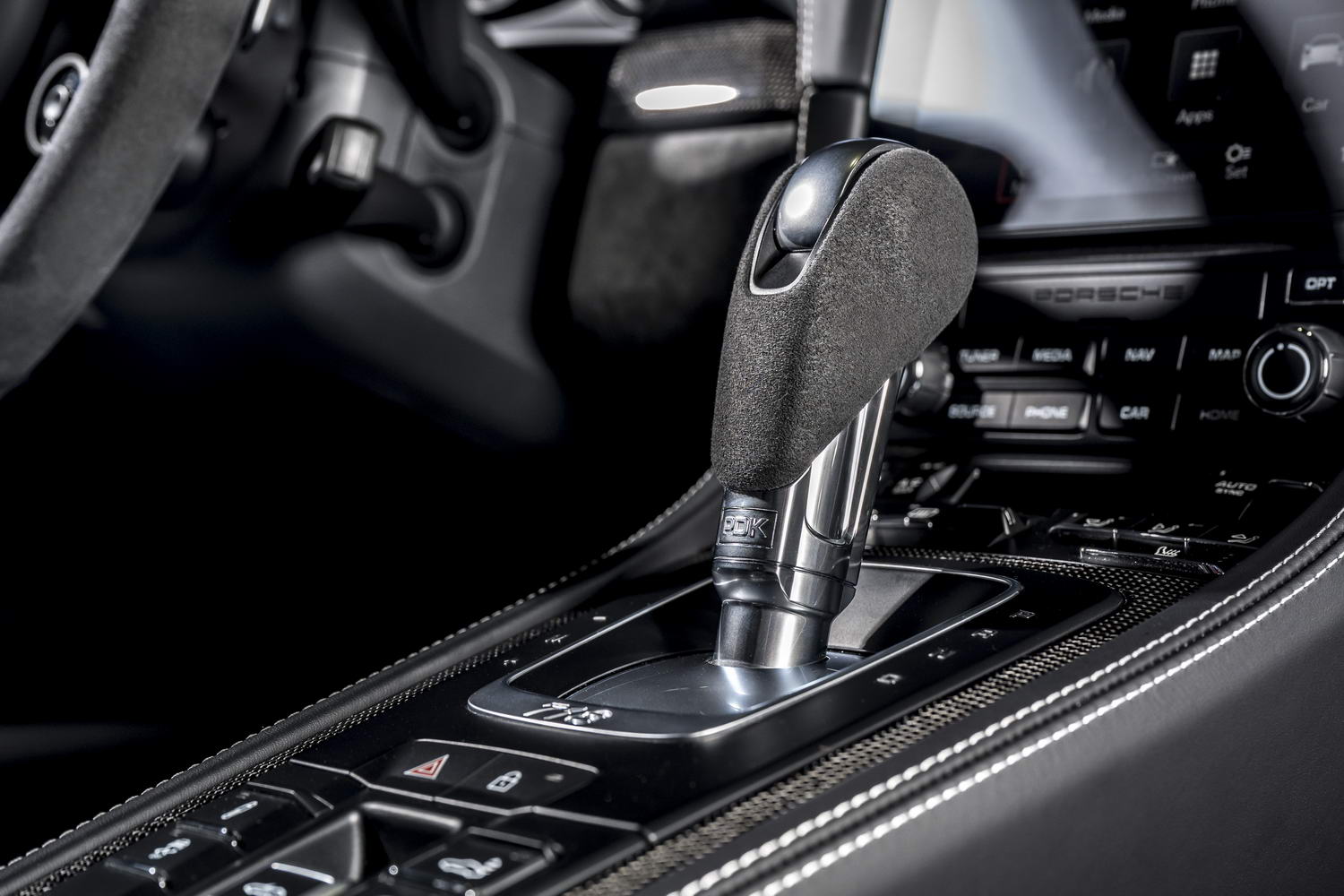 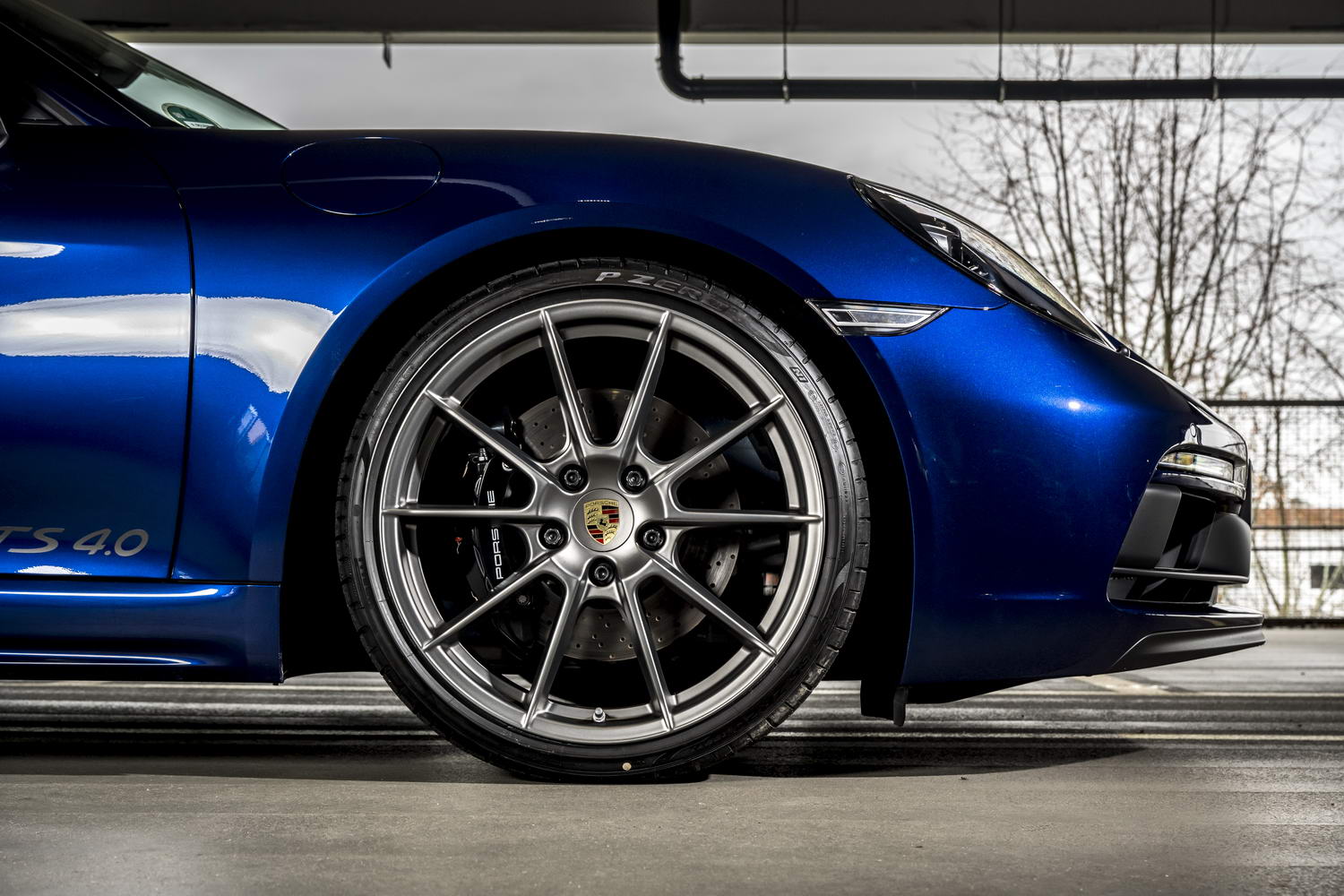 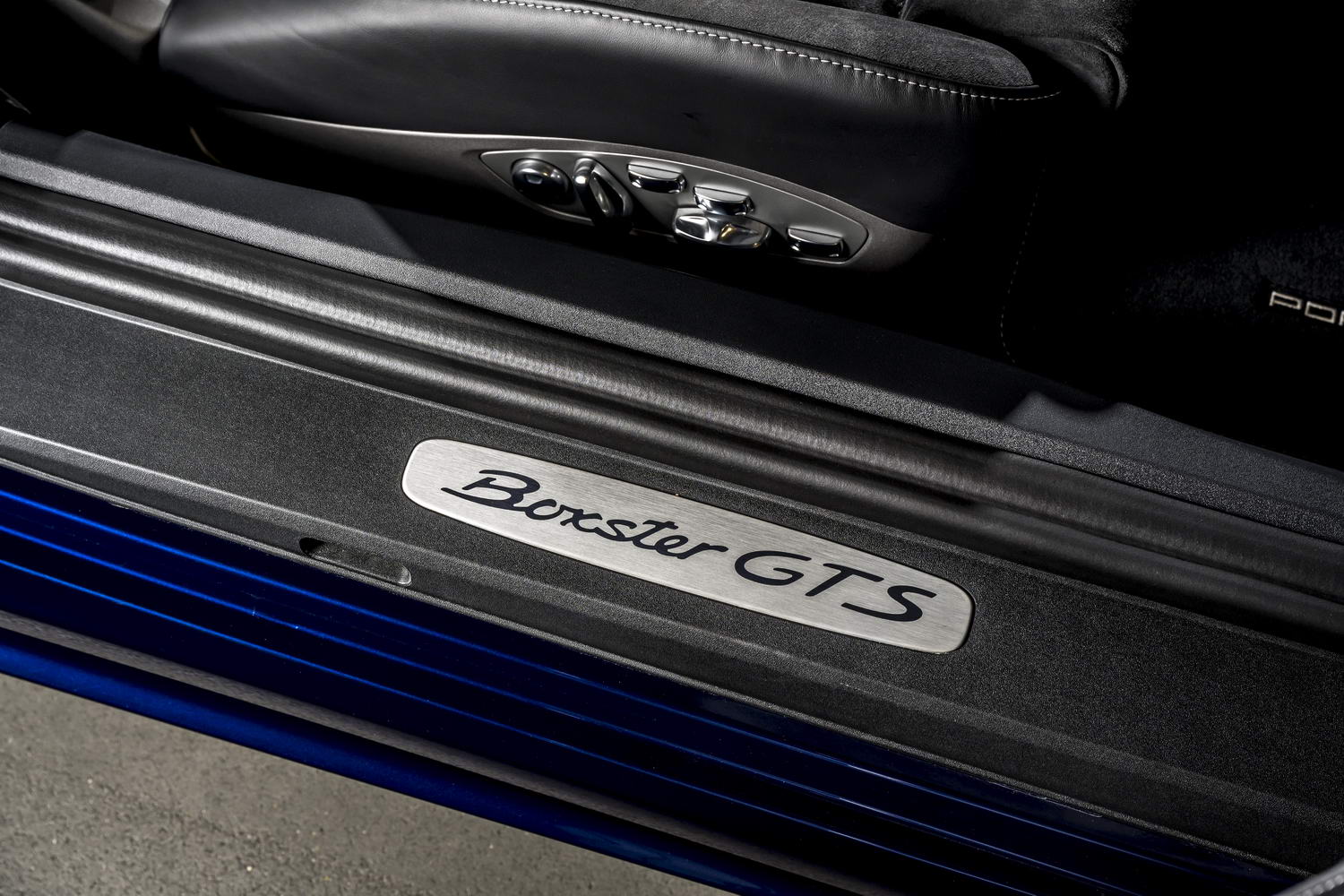 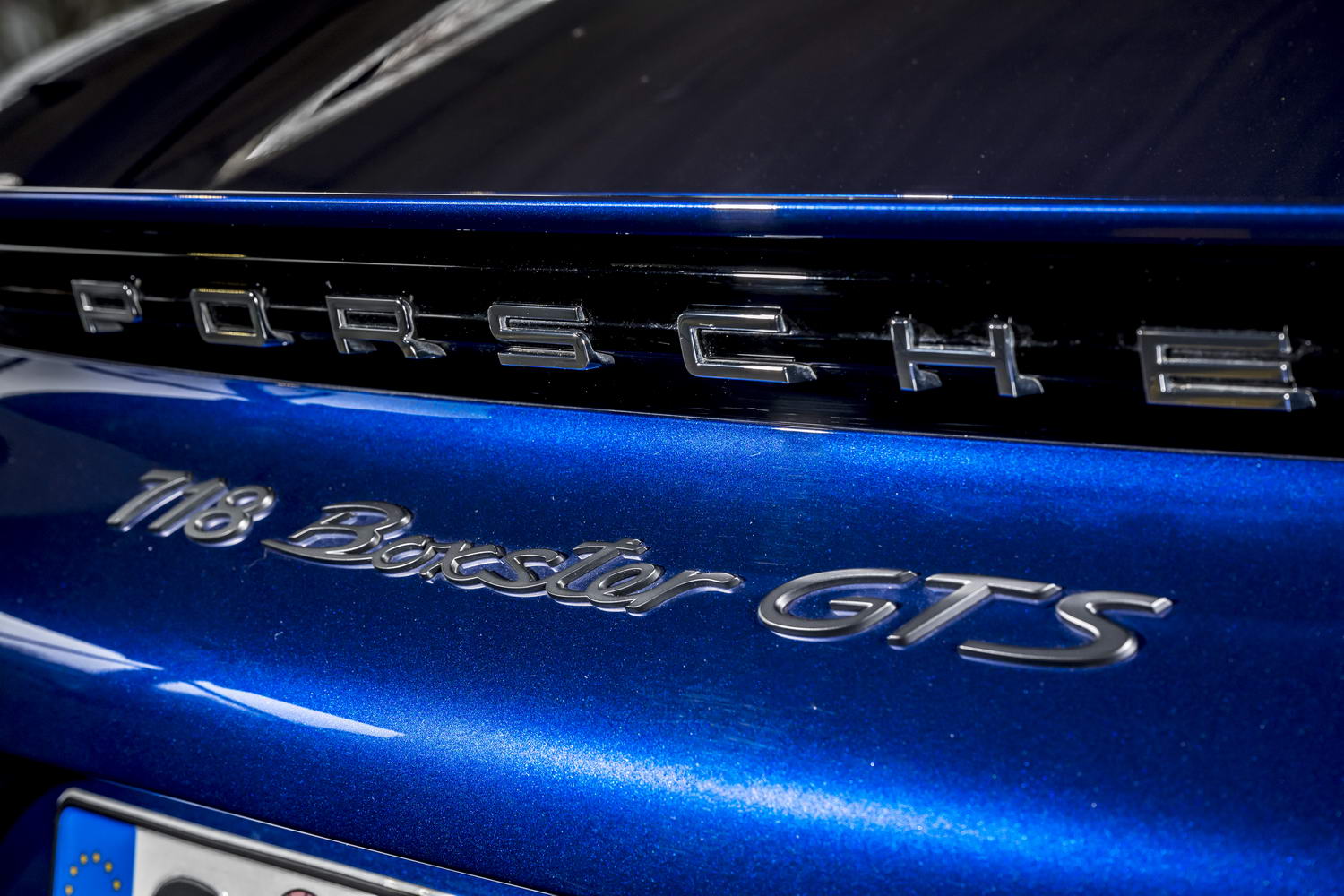 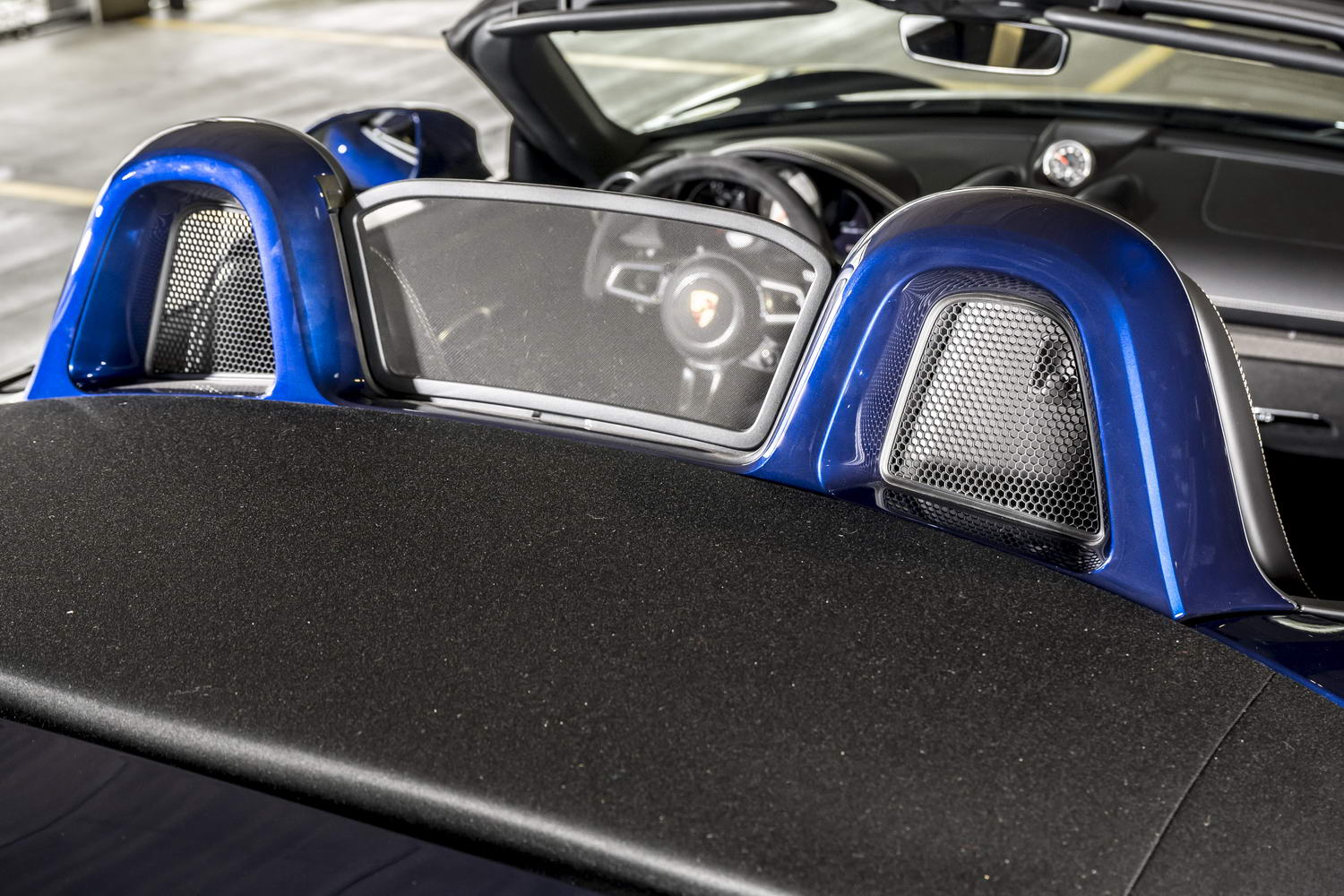 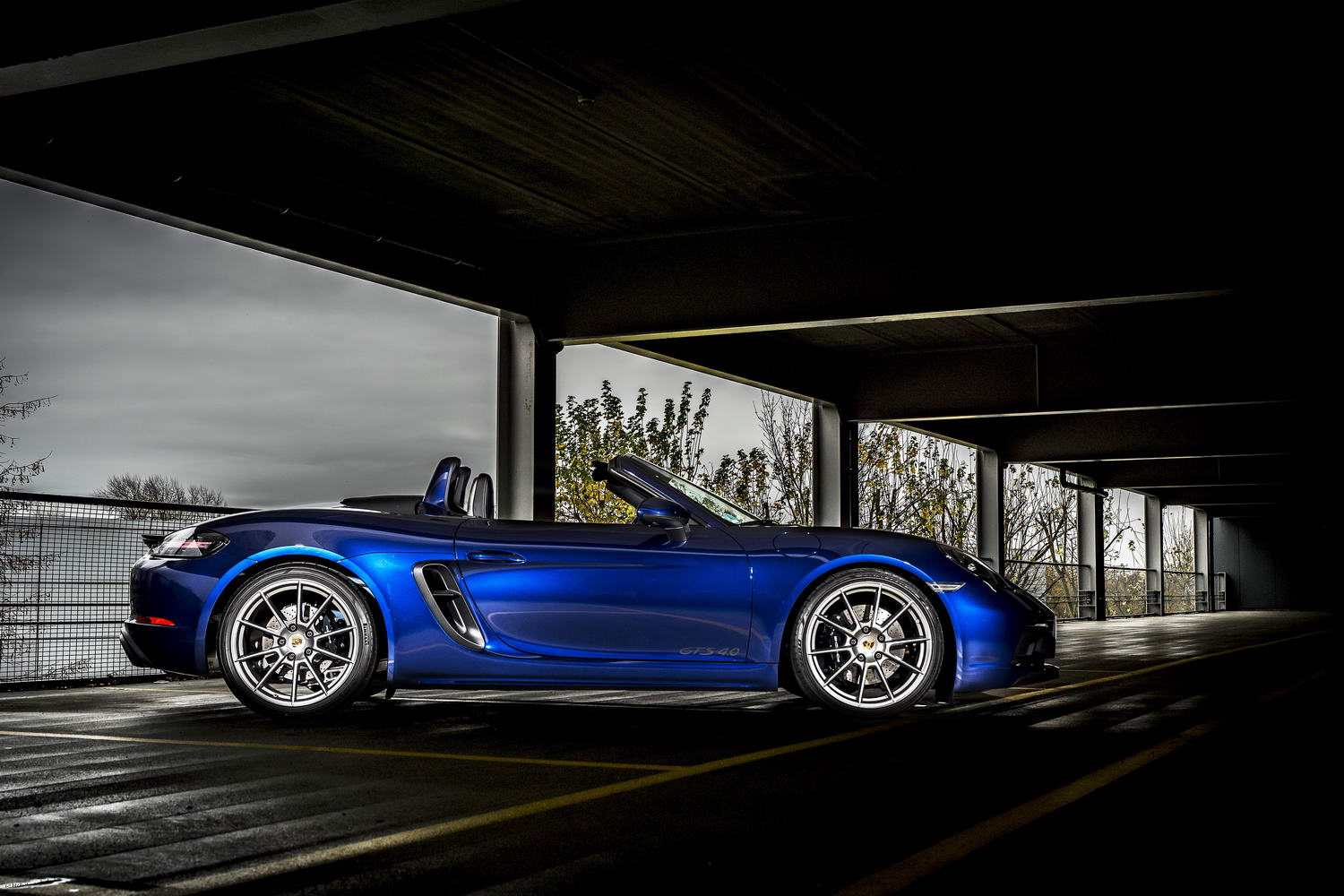 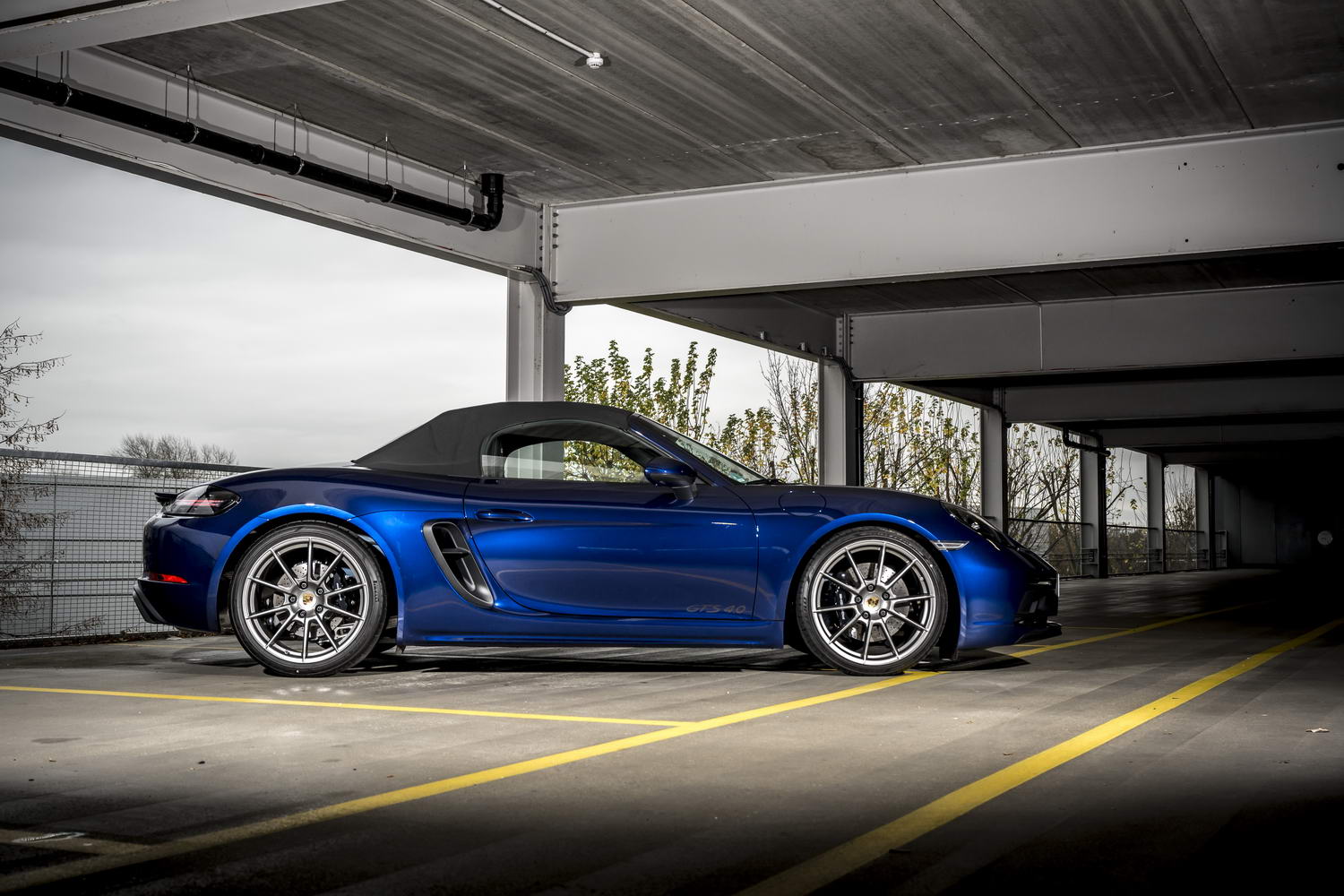 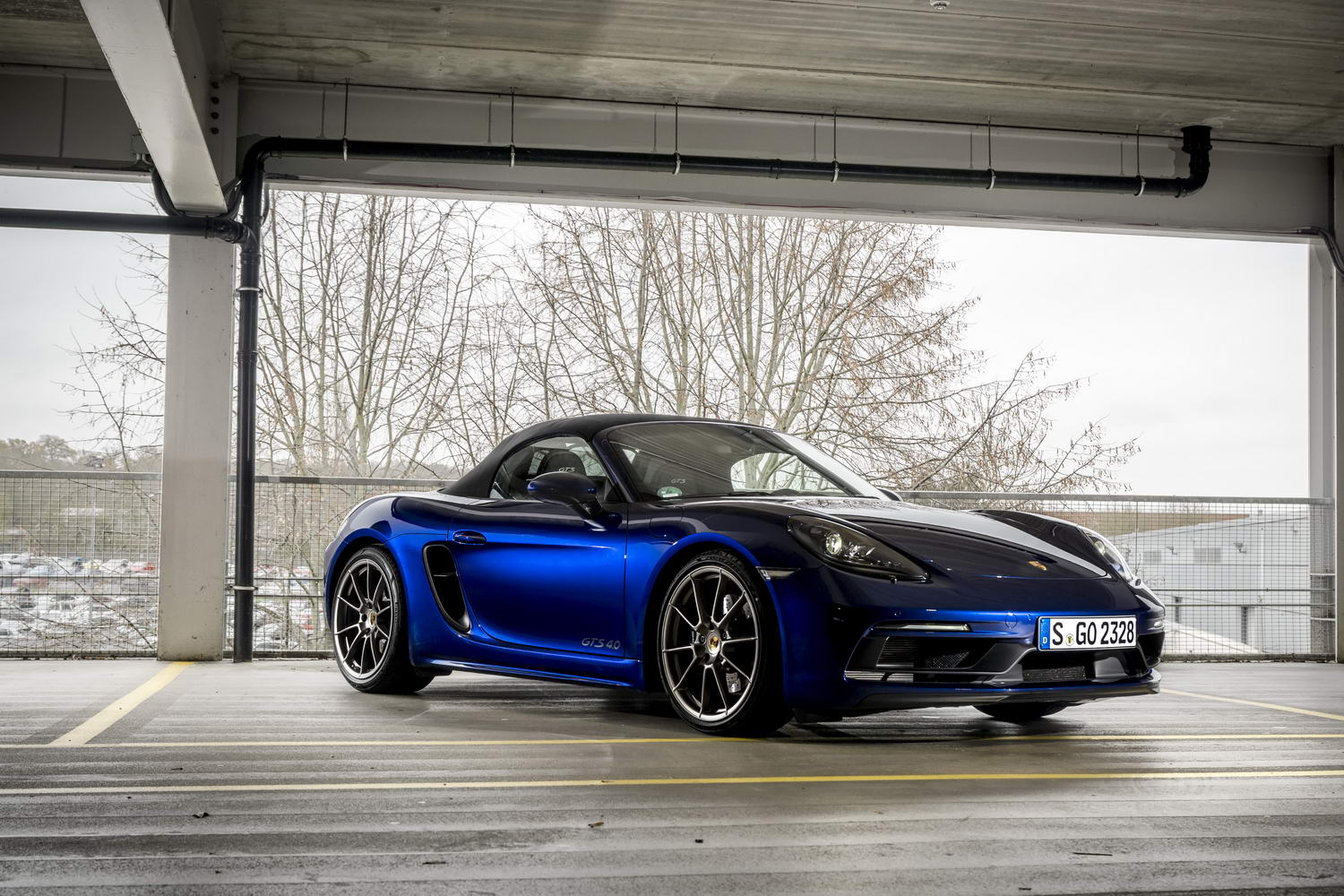 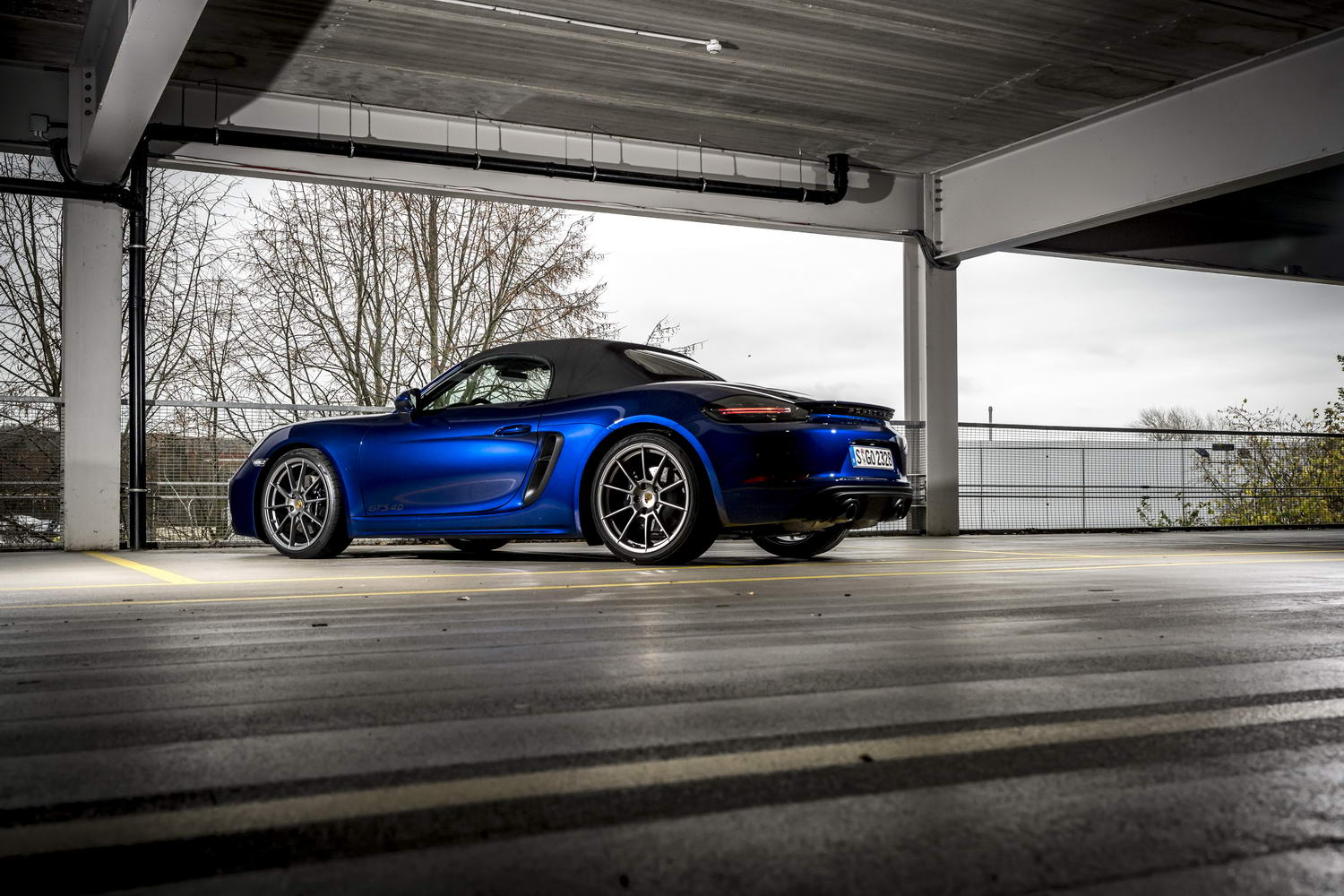 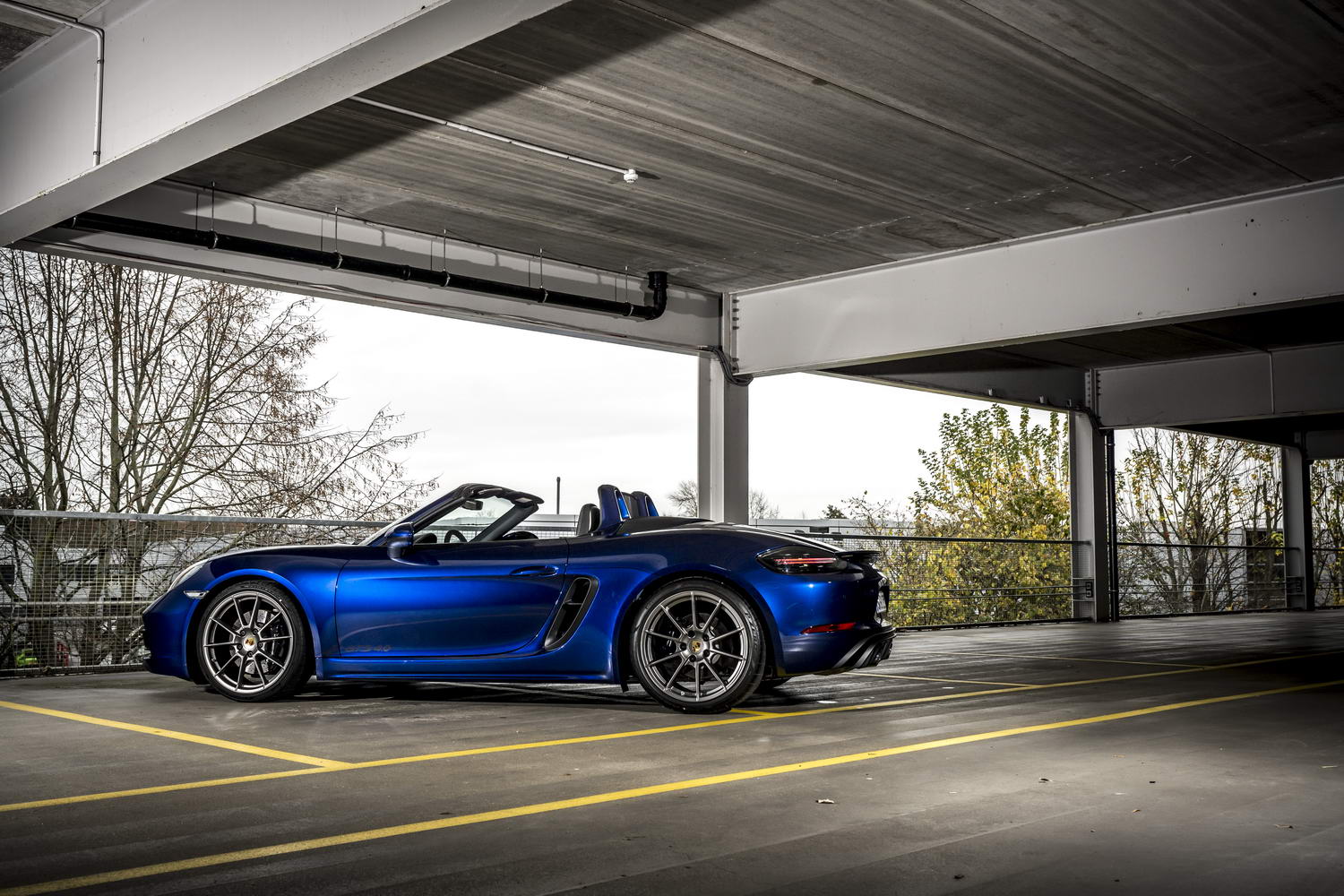 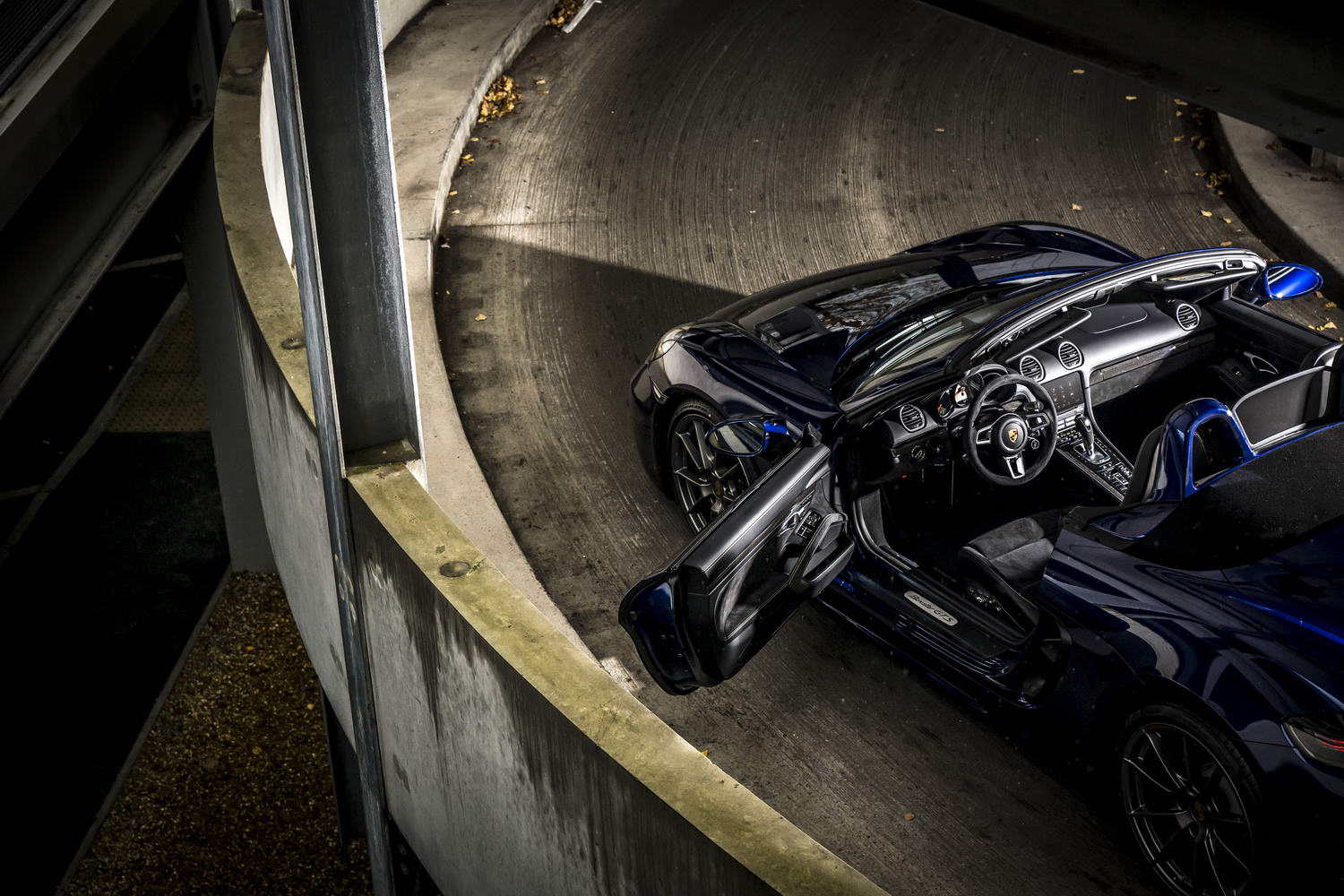 Two pedals in the footwell of the sublime Porsche Boxster GTS 4.0, instead of three, is not as detrimental to this stellar sports car's character as you might think. In fact, the PDK transmission might make the mighty GTS just that tiny bit better...

It's a Boxster GTS 4.0. Therefore, it looks terrific. We've never thought the Boxster was particularly pretty before now, but over the decades it has been in service (it arrived way back in 1996, remember) Porsche has been refining and smoothing out its shape, to the point that it now has a superb exterior aesthetic. Ditto the interior, which is showing its age up against some of the company's newer products, but which is still magnificently driver-focused, is put together in solid Teutonic fashion and can be enlivened with touches like carbon trim inlays and an Alcantara steering wheel and gear knob.

Visually, of course, on the outside there is nothing to give away that this GTS is a PDK, rather than a manual, but inside the cabin it becomes more obvious. The clutch pedal in the driver's footwell is gone and the short, stubby manual six-speed lever is replaced by the golf-ball-on-a-stick-esque PDK item. On the steering wheel are two paddle shifts accordingly, which are beautifully made of metal and lovely to operate, but which are also a tiny bit too small. They could do with being about 20 per cent bigger. Other than that, it all looks like a 718 Boxster GTS inside.

If there is any criticism of the utterly magical Boxster GTS 4.0 manual, it's that the gearing is too long. Like any Porsche 718, the six-cylinder GTS is saddled with a tall-geared transmission that will pull 140km/h in second and getting on for 200km/h in third. Which is just too leggy in a supposedly sharp and focused sports roadster like this; three-pedal purists might scoff, but the whole principle of having a manual gearbox in the first place is to involve you more in the action of driving the car on your favourite roads. In the GTS, unless you are happy to smash all the legal speed limits to smithereens, you will never use anything more than second and third on your favourite, twisting, challenging routes. And you might actually get away with only using third, in reality. Which makes having a clutch pedal seem like a bit of a needless frippery.

Mind, we'd defend the manual GTS 4.0 on the basis it has a lot of torque, so it can go quickly and sound fabulous even if you never venture much beyond 4,500rpm. Oh, and its shift action is phenomenal, too. But that's not the point. What the PDK offers is more ratios, more closely stacked together. The gearing is still a little bit long, allowing the car to run to about 110km/h in second, but there's more of a suggestion that this automatic model needs more thought from its driver with regards correct gear selection during 'spirited' driving.

And Porsche quotes plenty of improved metrics for the PDK versus the manual. It has more torque, 10Nm specifically, with a peak of 430Nm at 5,500rpm differentiating it from 420Nm smeared across 5,000-6,500rpm on the manual. That, along with its faster shift times and shorter gears, means the PDK is more accelerative, slashing half-a-second from both the 0-100km/h (4.0 seconds plays 4.5 seconds) and 0-160km/h (8.7 seconds up against 9.2 seconds) times when compared to the manual, and still being comfortably ahead for the 0-200km/h sprint (13.7 seconds versus 14.1 seconds). You do sacrifice 5km/h from the top end as a result, although we'd say 288km/h flat out from the GTS PDK is pretty irrelevant. Further recompense comes in the form of improved economy and CO2 figures. Porsche says 9.6 litres/100km and 219g/km at best from the PDK, up against 10.7 litres/100km and 246g/km from the manual, but these are NEDC-correlated. Nevertheless, even on the stricter WLTP regime the PDK is cleaner than the manual's NEDC figures, turning in 10.1 litres/100km and 230g/km.

So it's greener, more accelerative, and potentially more involving, despite its paucity of pedals. And that's why, as much as it pains us to say it as driving enthusiasts, we think the PDK is the gearbox of choice for the Boxster GTS 4.0. It's a supreme twin-clutch unit, for starters, shifting near-instantaneously in response to clicks of the wheel-mounted paddles and yet never jarring its changes. In full auto mode, it can shuffle discreetly up into seventh on part-throttle openings without you even noticing, but as soon as you push the right-hand pedal with any conviction - and this counts with the car in its most relaxed setting ('O' on the rotary dial) - then it quickly drops down a number of gears and fires forward. In the middle of that aforementioned driving-modes dial is the Sport Response button, which gives 20 seconds of full overtaking potential when pressed; the manual, of course, cannot have this function.

It's when you're on the paddles or clicking the lever in its sequential side gate that the PDK makes the most sense, though, because it now means second, third and fourth are in play on back roads, instead of just second and third in the manual. A small change, you might think, but it does feel like you need to do more, be more aware of things when driving the PDK quickly than in the manual. And so, as much as we love using a clutch pedal and slotting a lever around a tightly-hewn H-gate, we have to say the dual-clutch 'automatic' offers up just as much fun, if not a bit more, than the manual when it comes to the Boxster GTS.

Oh, and there's one final pay-off: despite the fact it is more accelerative and perhaps more involving, the PDK has an extra ratio compared to the manual model - so, at a 110km/h cruise, for example, it's a touch more relaxed, holding 2,400rpm in seventh where the six-speed 4.0 would be revving at 2,800rpm in top. Little details, but enough to be noticeable.

When talking about a €125,000 car, and that's before you've put any options on it, then it might seem mad we're giving the Boxster GTS 4.0 PDK such a high mark here. However, that price needs placing into context. To get yourself into any of the more powerful or focused four-cylinder 718 Boxsters, you'll need €95,597 for a 300hp, 2.0-litre Boxster T or €99,265 for a 350hp, 2.5-litre Boxster S. Meanwhile, if you absolutely must have six cylinders in your mid-engined Porsche roadster, then the astonishing 718 Spyder is €134,891 as a manual (it, too, is now available with PDK for a €4,000 uplift). And the Spyder has a bizarre roof mechanism on it, as well, plus it only generates 20 more horsepower than the GTS.

What we're trying to say is that this car offers you all the wonderful sonic and performance attributes of the more costly Spyder, only in a slightly more practical and attainable form, and it's a quite significant step on in terms of the driving experience from any of the four-cylinder 718s, without being massively more expensive in the process. Financially speaking, this is definitely the sweet spot of the current 718 Boxster range, no doubt about it.

Let's face it, if you've got the money and you can afford a Porsche Boxster GTS 4.0, you're not going to go wrong whichever gearbox you choose. It's hard to know how a roadster could be executed much better than with a mid-engined, naturally aspirated flat-six with 400hp and a chassis as sensational as the one under the 718. In truth, so good is the Boxster that it kind of makes you question why you'd ever need a 911 Cabriolet - no longer is it viable to sniffily say that someone who buys a Boxster 'couldn't afford a proper Porsche', because cars don't come much more proper than this GTS 4.0. On a very, very tight points-scoring margin, and much to our surprise, the PDK is the slightly superior gearbox for this midships masterpiece, despite the €4,078 extra outlay for the unit. Overall, though - what a glorious car this thing is.

BMW Z4 M40i Roadster (2019) review
BMW Z4 M40i vs. Porsche 718 Boxster GTS 4.0 PDK (2021): great engine and decent dynamics from this generation Z4, when its two predecessors were no great shakes in the handling department. However, everything the Boxster does is operating at another level again and the Porsche isn't ugly. 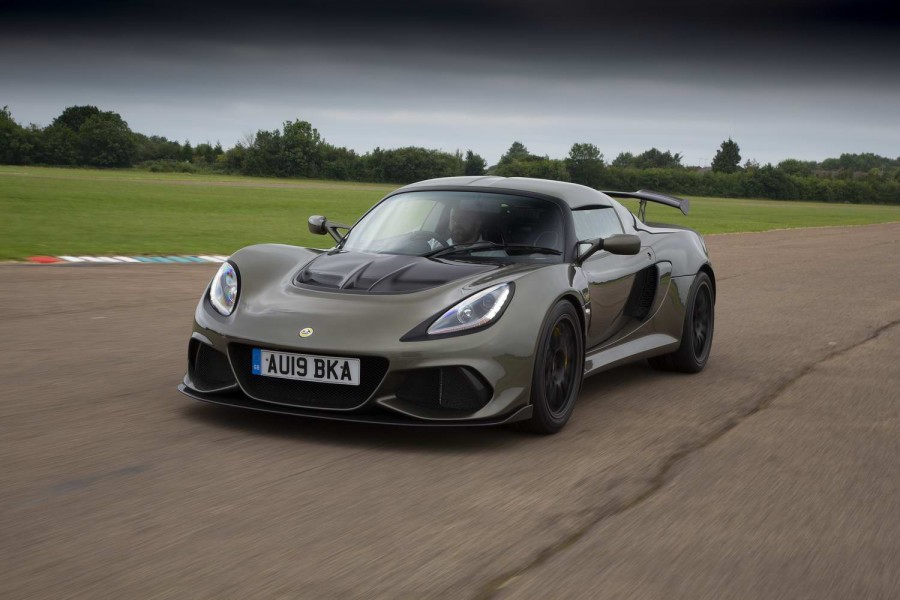 Lotus Exige 410 Sport (2019) review
Lotus Exige 410 Sport vs. Porsche 718 Boxster GTS 4.0 PDK (2021): we've picked the slightly less hardcore 410 Sport here, but the Exige is still demented compared to the urbane Boxster. Loads of thrills from the Lotus but it is a harder machine to live with on a daily basis, especially as its roof is a bolt-on/bolt-off affair that's impractical to use.