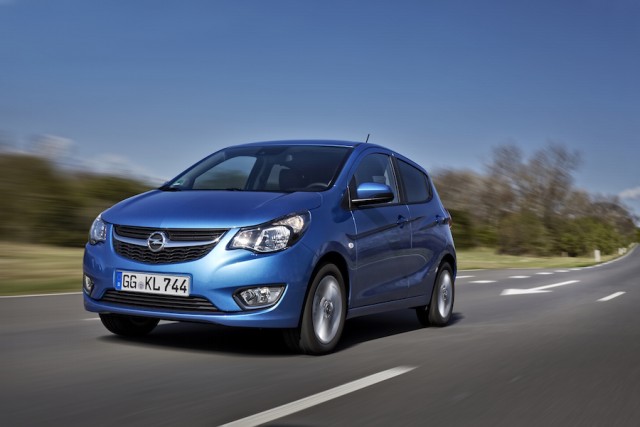 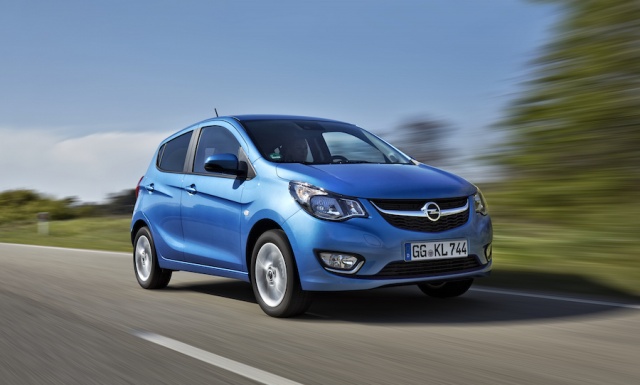 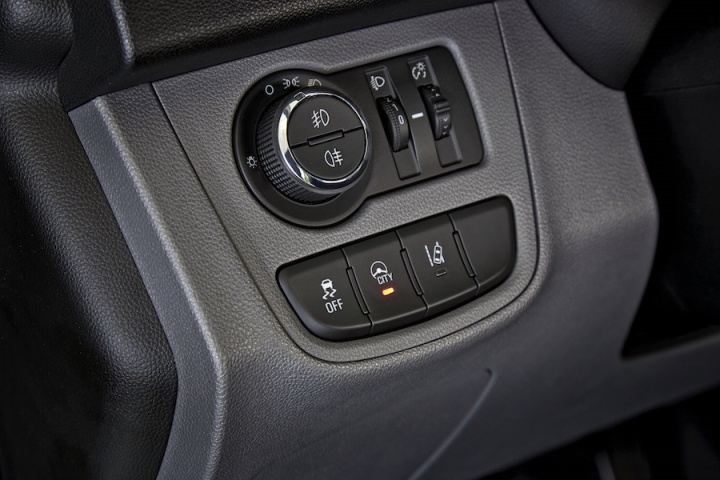 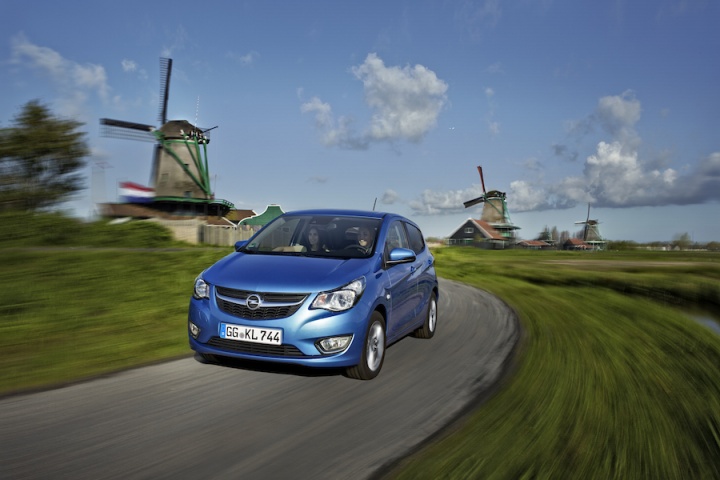 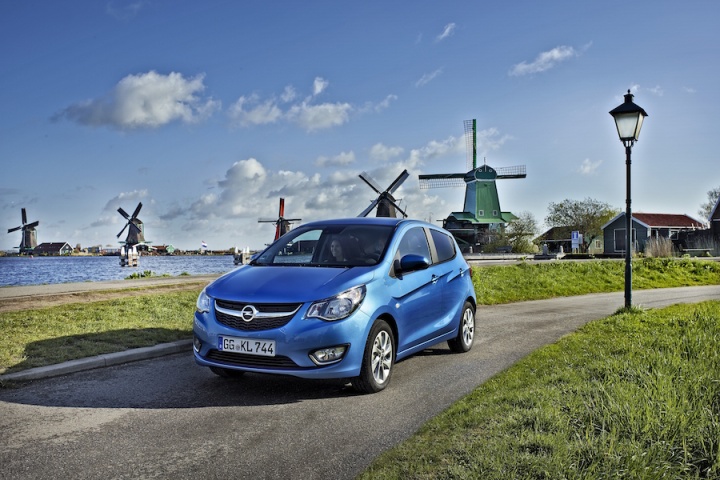 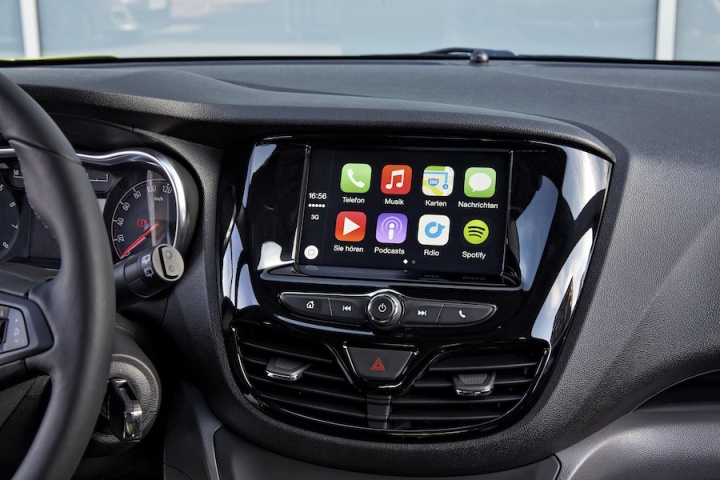 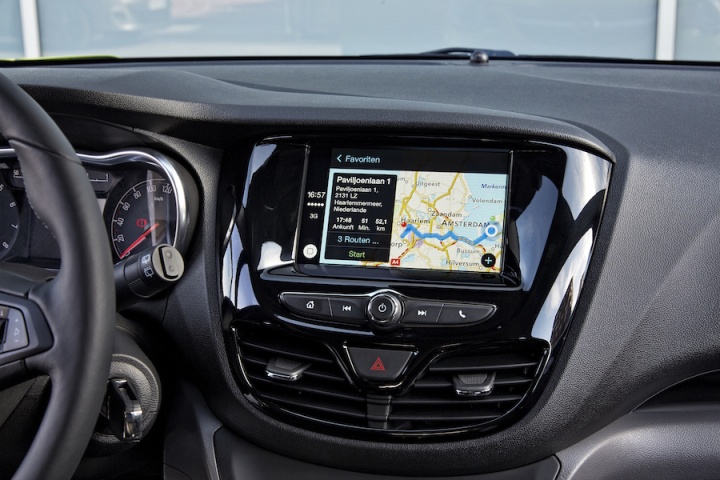 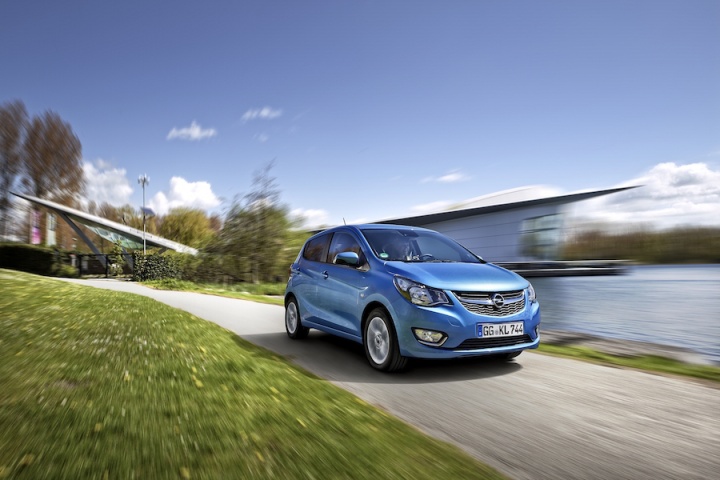 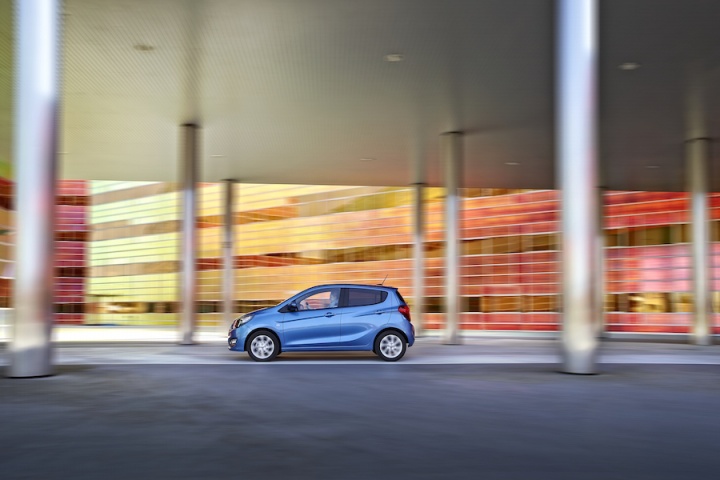 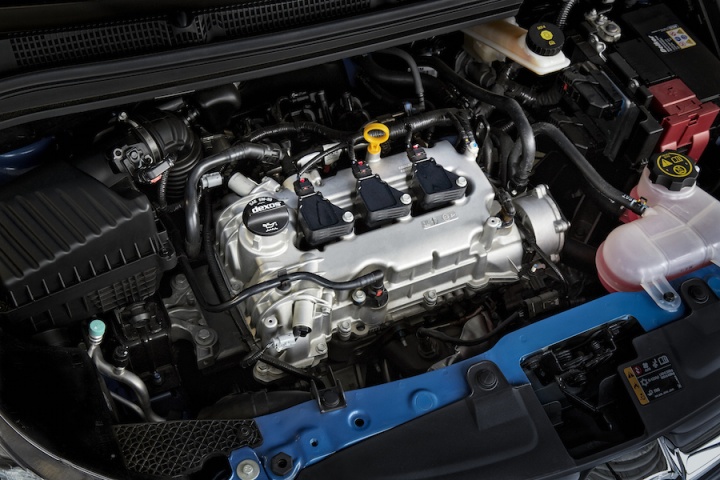 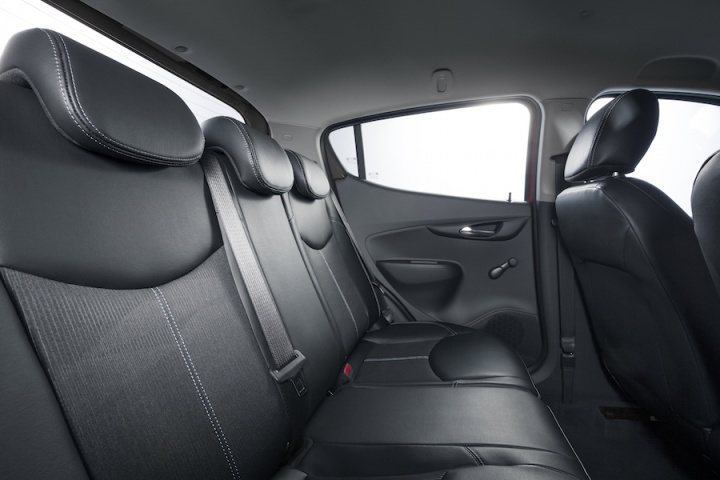 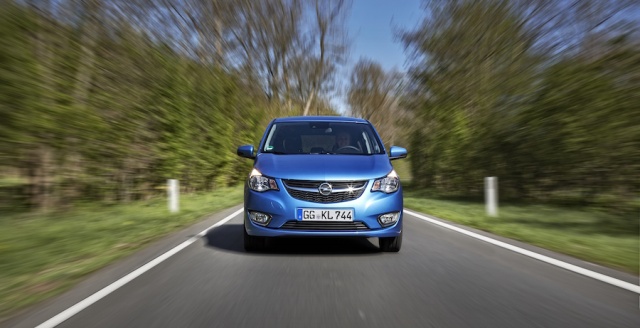 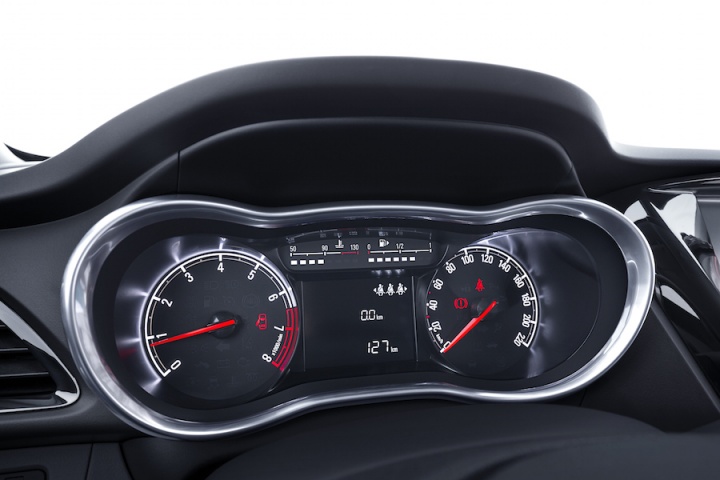 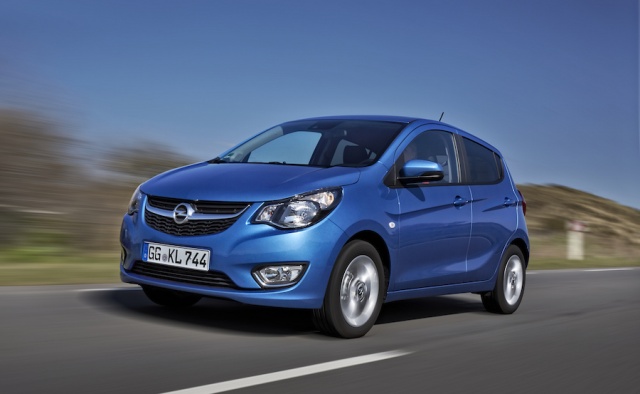 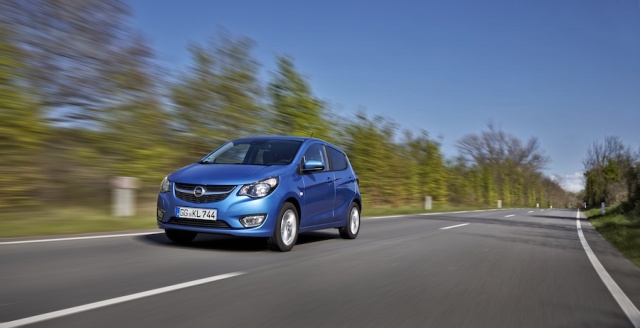 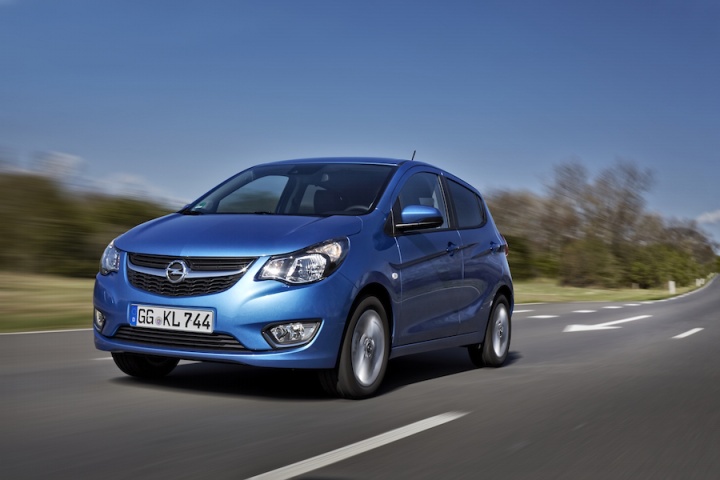 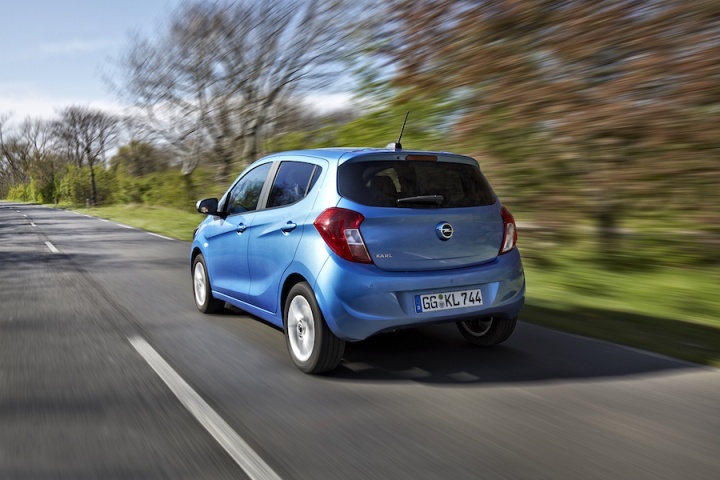 Opel's new Karl supermini demonstrates that small cars can be refined too.

The Karl may be Opel's smallest car, but in both looks and performance it delivers a package that is every bit as considered and refined as the company's larger models, showing many of its rivals how it should be done.

Given that there is a very finite number of ways in which a five-door car of this size can be packaged in order to maximise space, Opel's designers have done a good job in giving the Karl a fair degree of style. It is more curvaceous than the likes of the Hyundai i10 or Citigo/Mii/up! trio from the Volkswagen Group. Its flanks feature acute diagonal contours that do a good job of breaking up what would otherwise be a boxy body style. It also sits well on the 16-inch alloy wheels that feature on the range-topping SE trim grade, though these also give you a clear view of the drum brakes on the rear.

There's a vibrant palette of ten exterior hues to choose from but inside it is a more conventional affair without the multitude of customisation options that can be had in the similarly sized Opel Adam. The Karl is no less for it though as most of the materials used throughout the cabin have a higher quality look and feel to them in comparison to some of its more price conscious rivals. On SC and SE trims there's the seven-inch IntelliLink touchscreen, which from early 2016 will be available with Apple's CarPlay system. Thanks to this touchscreen system the centre console is a very simple affair with air ventilation controls located below, while there are two cupholders just ahead of the gear selector.

Optional heated seat controls are located between the front seats, as is a conventional handbrake and one further cupholder for a rear passenger. The dashboard in front of the passenger seat features a small ledge with a useful rubber base to stop smaller items sliding around while the glovebox is of a reasonably good size. A relatively high roof line is a boon for taller rear passengers too and with the rear wheels pushed right to the extremities of the chassis there is adequate legroom as well. Aside from the limitations of a high load lip the boot space comes in at 206 litres and can be expanded up to 1,013 litres by lowering the 60:40 split folding rear seats.

Opel's generosity with the interior space comes as a benefit to the driver too by way of a well-positioned pedal box and an adjustable steering column for height. The front seats are comfortable and have generous side bolsters to keep you in place when cornering.

Buyers won't have a choice in the engine department; Opel is only selling the Karl with a 1.0-litre three-cylinder EcoTec petrol unit that produces 75hp at a screaming 6,500rpm and peak torque of 95Nm at a lofty 4,500rpm. So you won't be winning any traffic light grand prix with it, but in regular urban settings it performs as well as can be expected. In comparison to the three-cylinder units found in the Volkswagen Group's city car family and the Citroen C1/Peugeot 108/Toyota Aygo triplets the Opel engine is quieter and feels more refined. Providing you don't keep going in search of that peak horsepower figure the engine should prove economical - Opel says that over a combined run it will use 4.3 litres/100km while emitting 104g/km. The five-speed manual transmission that it is mated to offers a good set of gear ratios and has an average throw between the gears. Fifth is suitable for motorway work but you will find yourself having to drop down to fourth for any overtaking as the modest torque is only found at higher engine speeds.

If you do happen to find yourself carrying a little more speed the Karl shines through as a competent and surefooted car. Its suspension feels well sorted, comfortably soaking up imperfections on the road while transmitting little through to the cabin. That suspension has also been tuned to suppress any noticeable amount of body roll during lateral acceleration thus giving the Karl the kind of cornering sensation you would expect from a larger, more upmarket car. The steering isn't overly sharp in its feedback and the car doesn't exhibit any significant degree of understeer if you carry a touch too much speed into a corner. There is also a City mode for the steering that makes it finger-tip light, which can make parking even easier. Speaking of which, despite the engine bay only being occupied by a small engine and with those wheels spread right out, the Karl doesn't have a particularly impressive turning circle. It's not end-of-the-world stuff, but is something that is expected of cars of this size, the Suzuki Celerio being an excellent example of this.

Prices for the Opel Karl start at €11,995 for the S, but the majority of buyers are likely to spring for the mid-range SC model, which starts at €13,695. In this there's a Lane Departure Warning System, electric front windows and door mirrors, cruise control, a multi-function steering wheel, the seven-inch IntelliLink infotainment system and 15-inch alloy wheels. Opel also includes front fog lights and body-coloured door handles and mirrors.

The range-topping SE model is priced from €14,695 and adds Bluetooth phone and media streaming functionality, a leather covered steering wheel, an uprated speaker system, privacy glass on the rear and 16-inch alloy wheels.

In comparison to its equivalent Hyundai i10 and Volkswagen up! rivals, the Karl is well-priced. It doesn't quite rival the i10 for overall refinement and drivability so that remains the class leader, but it does carry a bit more style than the Korean car, which may sway image-conscious buyers.

After the disappointment of the Adam, Opel has returned to form with the Karl proving that small cars can still pack a big punch when it comes to overall drivability and functionality. The fact that its designers have added in a dollop of style on top of all that just further strengthens the Karl's case.

Hyundai i10 review
Hyundai i10 vs. Opel Karl: a hugely impressive car and perhaps one of the best that Hyundai has produced to date. It can be a little bit on the pricey side but it feels worth the extra. 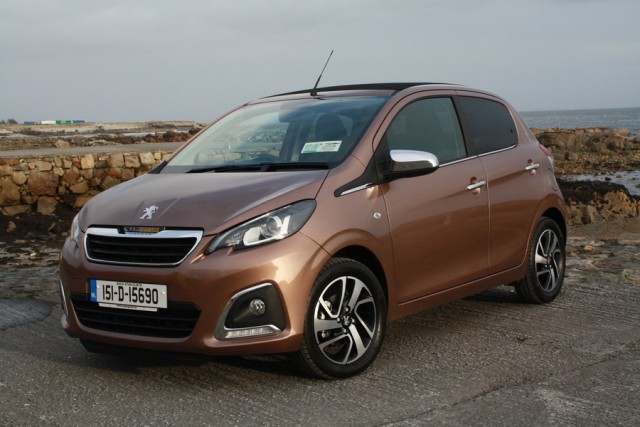 Peugeot 108 review
Peugeot 108 vs. Opel Karl: the most classically stylish of the PSA/Toyota trio, it offers personalisation and reasonable room inside.

Volkswagen up! review
Volkswagen up! vs. Opel Karl: yes it's the most expensive of the Volkswagen Group triplets but it looks and feels the best inside. Great fun engine to drive too.