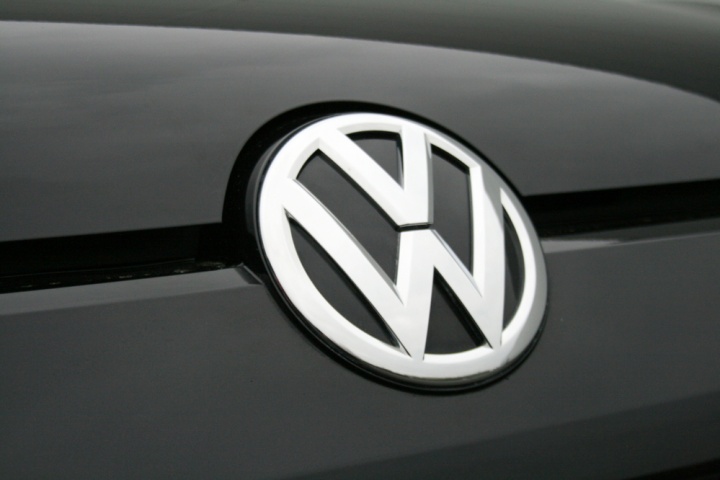 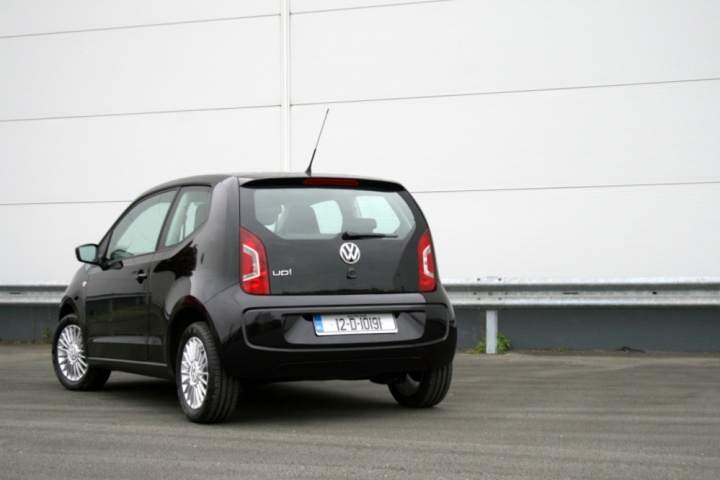 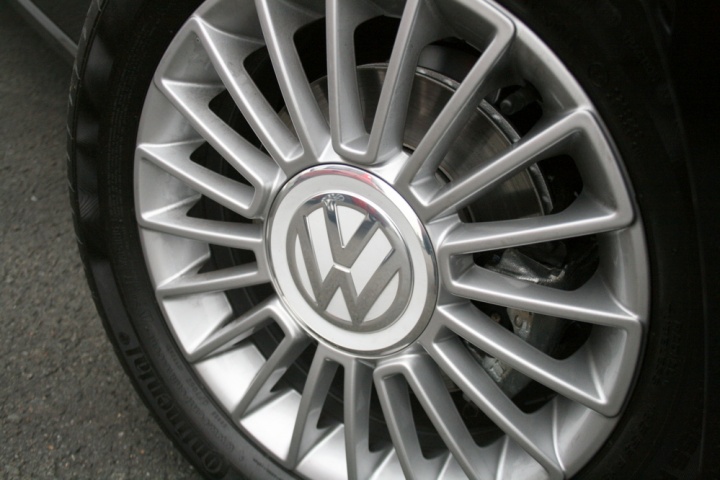 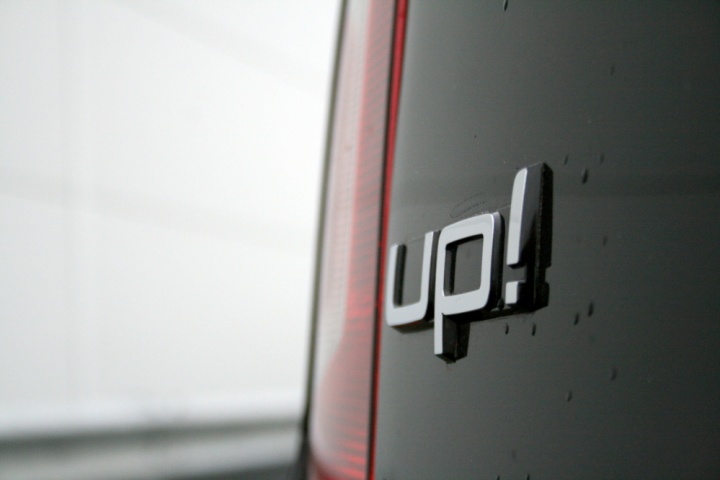 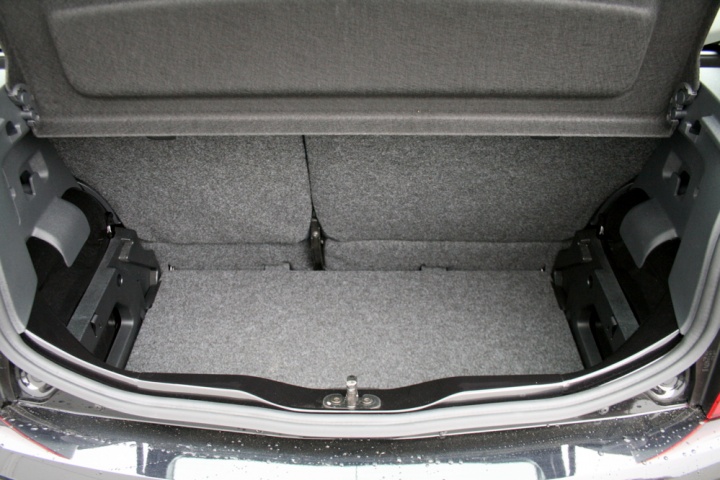 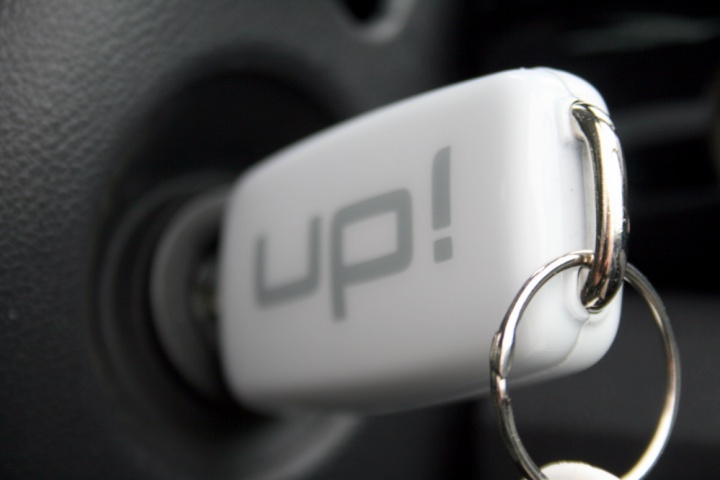 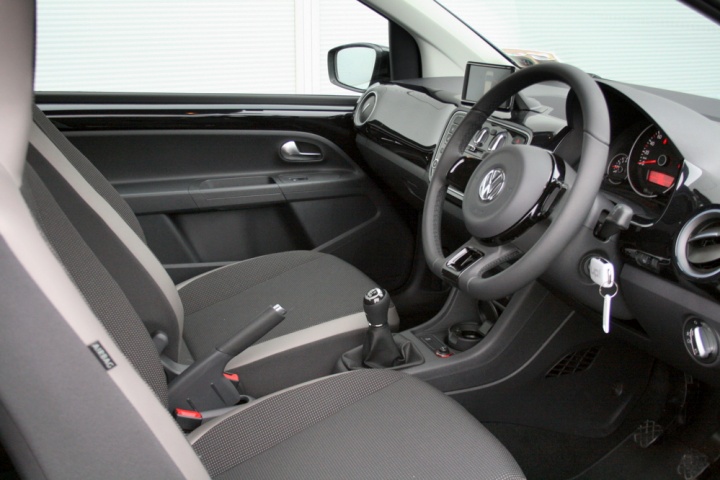 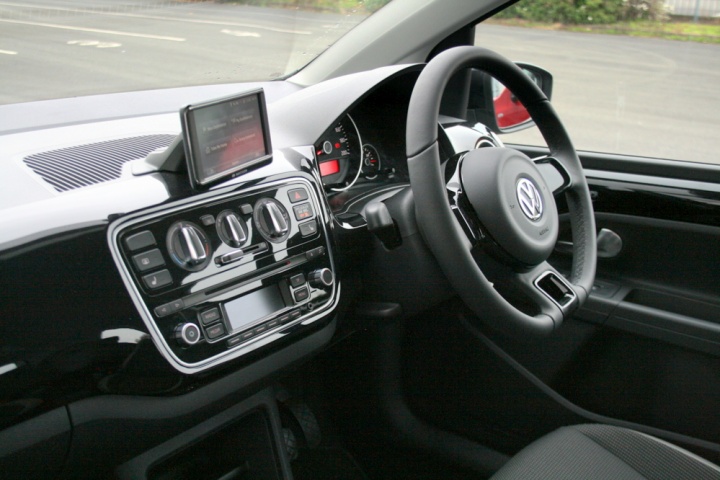 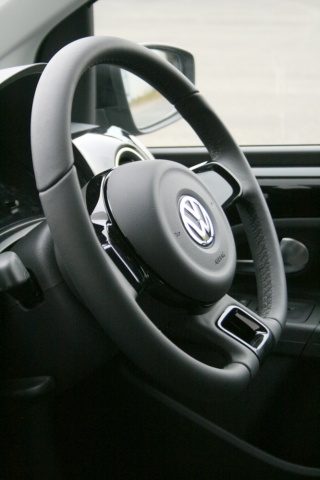 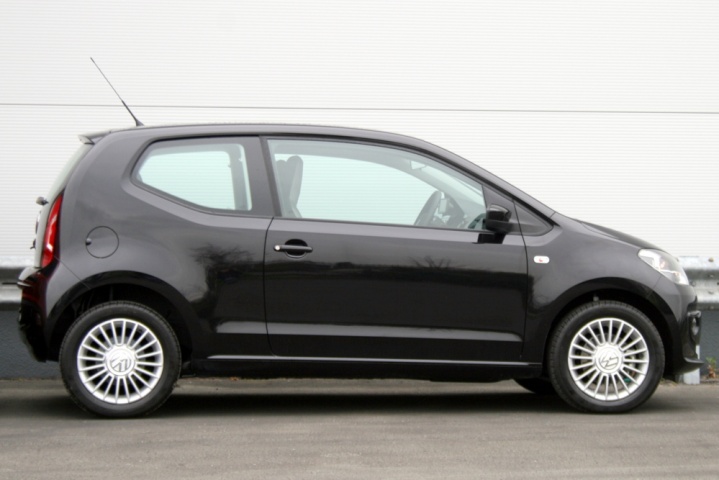 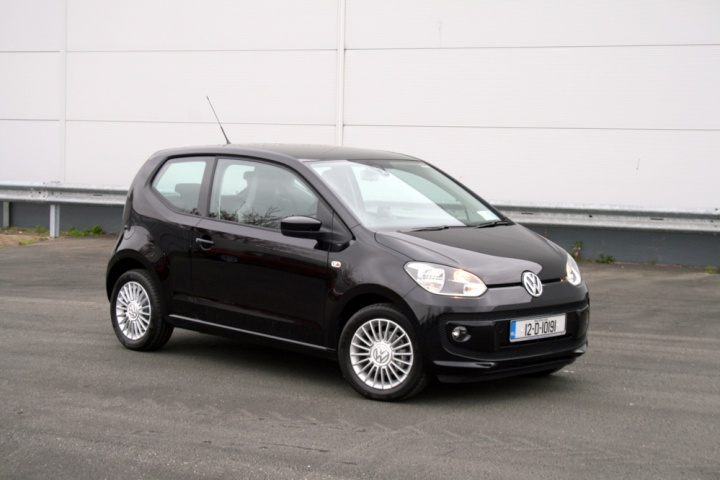 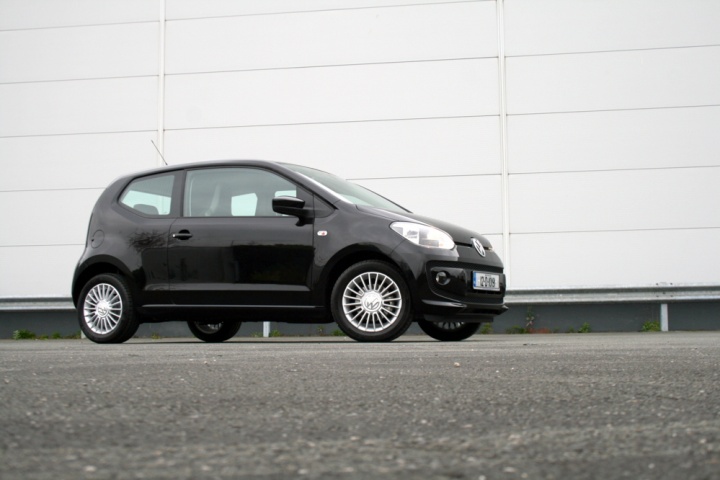 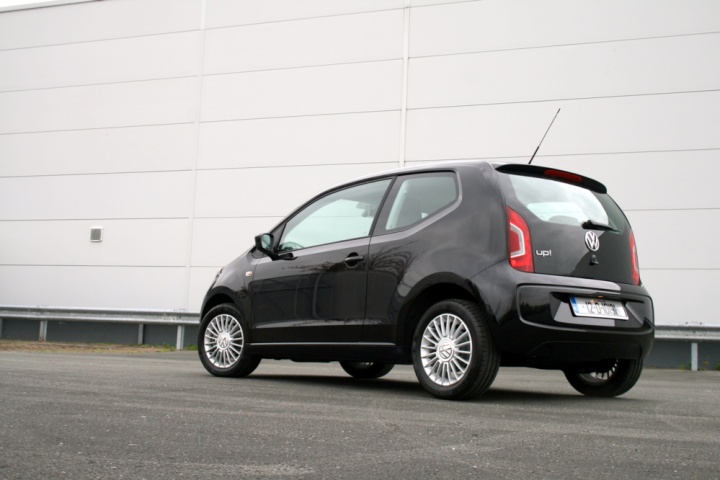 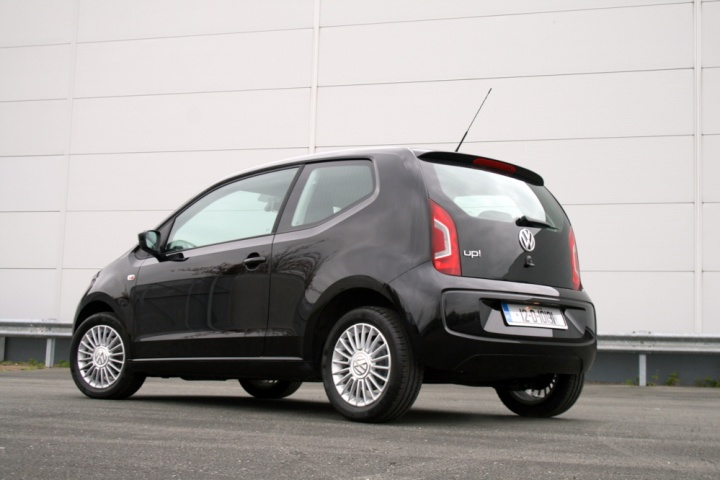 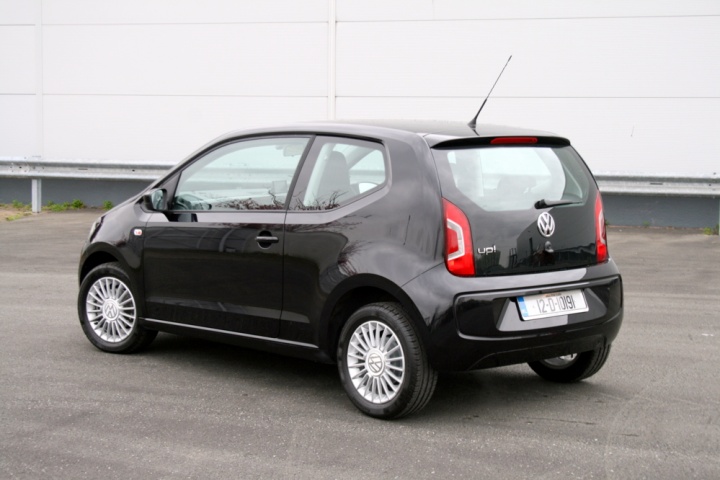 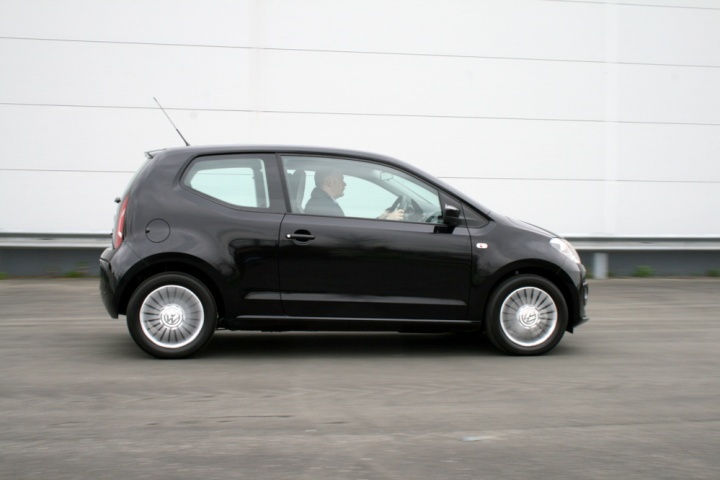 Can Volkswagen's new baby live up to the considerable hype surrounding it? We drive the three-door model.

Volkswagen has gone from very little presence at this end of the market to having one of the most talked about cars this year. The up! has been hyped to the nines, but it deserves it. Not only is it cool and desirable, but it's actually really good on the road. The five-door version will be a corker.

The Volkswagen up! is one of those cleverly designed small cars that is simply cool. There's little in the way of design frippery inside or out, but the simplicity of the lines, the 'smiling' face and the large VW badges give it real presence - and desirability. It looks better in bright colours to our eyes, but at least the High up! model tested features the all-important 15-inch alloys.

Inside, this top-of-the range model is spruced up with a highly tactile three-spoke leather steering wheel and a 'black pearl' dashboard finish. The design is free of clutter, yet well thought out and interesting. Check out that tiny rev counter for instance, along with the well-positioned ventilation controls.

You sit down relatively low in the up!, endowing it with plenty of headroom no matter which of the four seats you're in. Access to the back is restricted by the three-door layout, though the doors are long and open particularly wide. Rear legroom is good too - for the up!'s class anyway. Sadly, the boot is quite miserable - the figures may say it's bigger than some rivals', but it's still tiny by other measures.

Motoring journalists often wax lyrical about the offbeat warble a three-cylinder petrol engine makes, likening it to the sound the six-cylinder engine in the Porsche 911 emits, but we do wonder if buyers care for such things at this end of the market. Volkswagen appears to have done its best to engineer out the three-cylinder sound from the up! and it's quieter and more refined than a lot of engines of this layout. It has plenty of performance though, thanks to 75hp peak power and the relatively low weight of the car.

The five-speed manual gearbox is a real tactile delight too, encouraging you to change gear for the sake of it.

Within minutes of being behind the wheel of the up! it's clear how polished dynamically it is. The damping is nothing short of stupendous, reacting to undulations in the road like a much larger heavier car. It controls body movements quickly and smoothly no matter how slow or fast you're driving. And despite the up!'s natural habitat in town it excels on an interesting country road.
As you'd expect, the controls are all light, but the steering is direct and offers some hint to the driver at what's happening at road level. Without even trying you carry a lot of speed in this car everywhere you go. The diminutive size helps with that of course, as you have more road to play with.

Volkswagen's entry-point for up! ownership is €11,745 on-the-road, which is not a lot of money at all given that even the most basic version comes with an arsenal of safety equipment, including front and side airbags, ESP, city emergency brake function and anti-lock brakes. Once you've tried the higher spec cars you'll find it difficult to go back though so we doubt many will opt for the entry-level Take up! though it features electric windows, stereo with MP3 playing and an aux-in socket.
For a €900 premium you get the Move up! which adds air conditioning, an adjustable boot floor and detail changes to the appearance and trim. This High up! version additionally features heated front seats, electrically adjustable and heated door mirrors, 15-inch alloys, front fog lights and an upgraded interior as mentioned above, for a starting price of €13,645. A five-door version will arrive this summer with an expected premium of €500.

Our test car was fitted with the optional (€370) Maps and More system, which takes the form of a slim removable satnav screen. It's not as slick a touch-screen as the iPhone's (what is?), but it does house a load of functions including Bluetooth and access to the car's economy data.