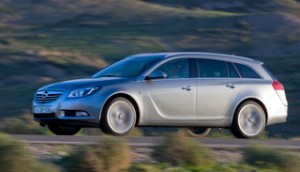 Opel adds 4x4 traction and a new diesel to its pretty Insignia, but don't expect to see too many on Irish roads.

Opel's Insignia is a car that almost certainly should have sold in bigger numbers so far here in Ireland, but has been held back up by the two Rs - recession and road tax.

The first R was something that Opel could hardly do anything about and it came just as it launched the stylish family offering. This meant that instead of selling shed loads, which it would almost certainly have done in Ireland if the car had arrived in 2006 or 2007, the numbers have been reasonably modest, something which cannot be said about the model's fortunes in the rest of Europe, where it is either number one or two in its segment in eleven countries. Along with that, the diesel engines weren't quite as clean as their rivals', so prices were high, as was annual road tax.

A massive 230,000 Insignias have been sold Europe-wide since it has been launched, but what was missing from the line-up, according to Opel, was a 4x4 system for the diesel engine. So, here it is.

The Insignia has always been a pretty car and that's not changed. The cars we drove at the launch event were all Sports Tourer models, so very similar to the estate Shane drove recently. There are new interior options, with a new Indian Summer trim available for example - a very pretty dark tan colour. There is also a Sport Edition Pack, which comes with a black interior. With this, you get an OPC line leather steering wheel and gear shifter, along with 19-or 20-inch alloy wheels. This Sport Edition Pack is offered in Cosmo and Sport trim level.

Prices have yet to be finalised for the addition of 4x4 to the diesel model in Ireland, which is available with just the 160hp 2.0-litre CDTi model, but Opel Ireland tells us to expect to pay about a €2,000 premium over the standard model for the additional technology.

This gets the Adaptive 4x4 system, together with the adaptive FlexRide chassis and the electronically controlled rear limited slip differential (eLSD). Opel says that where it was offered in the 2.0-litre Turbo petrol model there was a 45 percent uptake of the option Euro-wide, but this is unlikely to be the case in Ireland, even when it is added to our favoured 2.0-litre CDTi.

The 4x4 system is clever in that it is networked with the ESP, steering angle sensors and the accelerator position and its super fast too, taking just 80 milliseconds to react. It can transfer power from zero to 100 percent on both front and rear wheels. Also, Opel reduces the fuel consumption penalty found in most all-wheel drive cars, by having the Insignia use front-wheel drive most of the time, only using the all-wheel drive when necessary.

We spent time in the 220hp 2.0-litre Turbo petrol version, which is fast but largely irrelevant. The 2.0-litre CDTi engine is much more useful to our market and that engine is now slightly cleaner than before.

But we're here to try out the 4x4 system. The results were pretty impressive. Although the diesel ran out of puff a little on the steep inclines and we found ourselves hunting between gears a little, the grip was outstanding and there was no sign of any drama with the car remaining sure-footed at all time.

It's hardly surprising that it is this good on bone dry roads; it would be likely to show its worth when conditions get poor. Although we might be enjoying nice weather now, cast your mind back to last January when we were all slipping and sliding around in chaos. If you had this car, you wouldn't be worrying too much.

Also, if you tow a horsebox or trailer, it's worth knowing that the 4x4 system features Trailer Stability Assist when fitted to models with tow bars. This helps counter vehicle instability that may occur when towing a trailer or caravan. It does this by reducing engine torque and applying brake pressure to selected wheels when needed.

The Insignia 4x4 is unlikely to be a big seller in Ireland, mainly because Irish buyers probably won't pay the premium for the 4x4 model unless they really need it and even the cold snap of last year is unlikely to prompt them to look too hard at this model. However, we really liked the 4x4, because it felt that bit more poised than the front-wheel drive version. Think of the Insignia as a good value executive car, rather than an expensive family car and car might just make an awful lot of sense to some buyers.