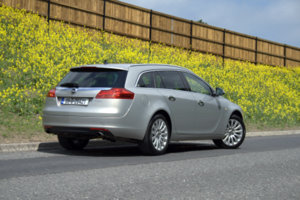 The Insignia has been on sale for a while now, but that doesn't detract from its striking styling. To my eyes it's a far more interesting shape than most other cars in the class. That's especially true of the estate version tested here.

Admittedly this is the top-of-the range Elite model with 18-inch alloys, and the 'Panacotta' metallic paint is a €586 option. However, the daytime running lights give the nose a distinctive, assertive look and the rear hatch slopes more than most estate cars'.

While that sloping rear hatch reduces boot volume a little, it's still a massive space. There's loads of room in the rest of the cabin too, front and rear. This car's leather interior adds to the ambience and the dashboard looks pretty good, though some of the plastics could be of higher quality and I'm not a fan of wood-like plastic trim.

As you'd hope, the Elite model is very well equipped, though our test car was also fitted with satnav and Bluetooth, at a cost of €1,534 and €375 respectively. We're used to expensive factory-fit satnav, but the extra cost of the Bluetooth seems a bit much.

It looks like the remote open rear hatch is standard on this model. It's massively useful when your hands are full of shopping or your unruly toddler. Hold down the button on the key and the hatch rises. It's perhaps even more useful for taking big items out, as there's enough of a delay for you to press the close button and then pick up the luggage and remove it before the hatch closes. Usefully, there's a switch in the driver's door to adjust the height it opens to too, reducing the chances of an expensive crunch into the low roof of a multi-storey car park for instance.

Among motoring journalists it's generally said that the Mondeo has the chassis to beat in this class, but really the Insignia is very close. It soaks up bumps well and can be engaging on the right road. Going against that are slow, light steering and a huge steering wheel.

Something I should have mentioned earlier in the week is that the 1.6-litre turbocharged petrol engine does not suit this car. If you drive everywhere with your foot to the floor it might be for you, but that aside the power delivery is really inconsistent and it makes smooth driving at low speeds quite difficult. Even if fuel economy and running costs are not important to you, we'd recommend you opt for a different engine.

In reality, most buyers will choose a diesel engine in the Insignia. We averaged 10.2 litres/100km (27.7mpg) over the past week. Much of the driving was urban admittedly, but there were several motorway trips too. The official CO2 figure is 186g/km, which puts this Insignia into band E for annual road tax of €630.

The Sports Tourer can be had with a 160hp 2.0-litre turbodiesel too, which to our eyes is the best buy if you want performance along with manageable costs.