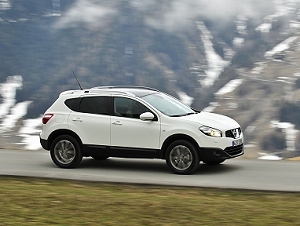 Irish buyers have already made the Qashqai part of the family, so Nissan should have no difficulty selling the facelifted version.

There was no way Nissan could have predicted how well its Qashqai crossover would be received when it was launched in 2007. Three years on it's time to give it a mid-life facelift and this time around Nissan is more bullish. So it should be with an increasing percentage of its sales in Ireland accounted for by the Qashqai and an impressive third place overall in 2009's (admittedly dismal) market.

The most obvious change to the Qashqai is its new nose. Nissan has replaced the bonnet, bumper, wings, grille and headlights and it's a highly effective update. Gone is the previous car's slightly awkward looks and instead the Qashqai has found some assertion. It could even be referred to as attractive. The back end is only mildly tweaked, though the rear light restyle is a success. The panoramic sunroof and larger alloy wheels add further to that depending on which model you opt for, while there are a couple of new colour choices.

Inside, Nissan has enhanced practicality a touch with new storage areas, but the single most significant update is to the instrumentation. The dials are new, but more importantly, the trip computer features a large, clear display and its operation is simple to master by way of buttons on the steering wheel. New colours and different leather top off the list of changes.

There's a lot to digest in the price list. We counted 14 versions of the facelifted five-seat Qashqai on sale. That's spread over three trim levels, four engines, several transmission options and four-wheel drive in the top cars.

The cheapest Qashqai is the XE model, which comes with 16-inch alloys, Bluetooth and MP3 connectivity, air conditioning, electric windows, six airbags, cruise control and ESP on the 2.0-litre models. That costs from €22,495 for the 1.6-litre petrol model.

Next up is the SV, which features 17-inch alloys, a better sound system, dual-zone climate control, auto lights and wipers, front fog lights, a leather steering wheel and gear knob and body coloured paint for the exterior door handles and mirrors. Prices start at €24,995.

Top-of-the range is SVE spec. The most expensive model is the 2.0d 4x4 SVE with an automatic gearbox, which retails at €38,995.

There's no need to dwell on this area for too long, as the updates to the Qashqai's chassis are minor. They extend to altered damping and bushing, which was in the pursuit of refinement and additional body control. It's no sportscar, but it handles more like a conventional hatchback than an SUV and ride comfort is good without causing any floating.

The engine line-up is unchanged, so buyers can choose between 1.6- or 2.0-litre petrol and 1.5- or 2.0-litre turbodiesel power. The former are (only a little) quieter, though they feel distinctly underwhelming in terms of performance, especially once you've experienced the torquey diesels. We also noticed that the six-speed manual gearbox fitted to the 2.0-litre diesel model is much nicer than that in the 2.0-litre petrol car - Nissan confirmed that it's a different unit.

All three 1.5-litre turbodiesel versions of the Qashqai are in Band B thanks to 135g/km emissions. Some markets have the option of a Pure Drive model powered by the same engine, but with further tweaks to bring the emissions down to 129g/km. As this is of no advantage to the Irish buyer it is not sold here.

While the Qashqai was verging on daring when it was launched in 2007, Nissan now realises that it struck gold and intends to build on that success rather than radically alter the formula. That's a wise move. The new Qashqai is simply more of the same in a better-looking, better-equipped package. No need for a crystal ball to predict that it'll do well.